[0002] Doherty power amplifier architectures are increasingly used as replacement for more traditional Class B amplifier in base-station and broadcast applications. Doherty amplifiers are simple in construction and highly efficient in performance. However, despite of its success, practicable implementations of Doherty power amplifier architectures may be rather limited in RF bandwidth, a problem that tends to be exacerbated towards higher power levels.
[0003] With Doherty power amplifier architectures being widespread due to their increased efficiency performance, linearity and operating bandwidth are typically deteriorated. Class C biased peaking amplifiers may causes AM-PM distortion, thereby limiting the overall amplifier linearity. Additionally, combiner devices for the output power are often regarded as the constraining factor for achievable RF bandwidth. Doherty power amplifier architectures are typically used in narrowband scenarios and commonly accompanied by pre-distortion input circuitry.
[0004] Specifically in frontend applications Doherty power amplifier architectures have become the quasi-linear architecture of choice. As microwave or millimeter wave air interface become more common, particularly with the advent of 5G communication technologies, the conventionally used amplifier classes as constituents of the Doherty architecture impose severe restrictions to its applicability which have hitherto been tried to address with different approaches.
[0005] Document WO 2007/117189 A1 discloses a method and a system for compensating signal distortions in multiple transmitting branches of a composite amplifier. Document WO 2007/078217 A1 discloses a detuned composite amplifier with a nonlinear drive function having a phase that varies with the composite amplifier output voltage amplitude and being configured to transform the output voltage transition point into an extended output voltage transition region to increase the efficiency of the composite amplifier. Document US 2014/0085000 A1 discloses a Doherty-type amplifier with a main-amplifier circuit, an auxiliary-amplifier circuit and a signal-generating device. Document US 2015/0116039 A1 discloses a multi-path amplifier system with an adjustable power splitter. Document US 8,354,882 B2 discloses a Doherty amplifier with an optimized input network for MMIC integration. Documents EP 1 463 198 A2 and US 2003/0001669 A1 disclose Doherty amplifier topologies which are actively compensated for distortion by feeding pilot signals and using portions in the output signals corresponding to the fed pilot signals in an adaptation loop for actively controller pre-distorters. Document US 2014/0159808 A1 discloses an analysis technique for Doherty amplifiers for adjusting matching networks of the amplifier.

[0022] Further details, aspects and embodiments of the invention will be described, by way of example only, with reference to the accompanying drawings. Elements in the drawings are illustrated for simplicity and clarity and have not necessarily been drawn to scale.

FIG. 1 schematically illustrates a multi-path amplifier according to some embodiments of the invention.

FIG. 2 shows a flowchart of procedural stages of a method for designing a multi-path amplifier according to some other embodiments of the invention.

[0023] In all figures of the drawings elements, features and components which are the same or at least have the same functionality have been provided with the same reference symbols, unless explicitly stated otherwise.

DETAILED DESCRIPTION OF SOME EMBODIMENTS OF THE INVENTION

connecting (M1) an amplifier stage having at least two amplifier branches (4a, 4b, 4c) to a combiner stage (6);

measuring (M3) output signals at the output of the combiner stage depending on the plurality of testing signals;

designing (M4) a structure of an input network stage (2) for the amplifier stage using a discrete filter component synthesis, a distributed filter component synthesis, a rat-race hybrid synthesis, a cascaded rat-race hybrid with a Schiffman phase shifter synthesis and a Schiffman phase shifter synthesis on the basis of the measured output signals, the input network stage (2) having at least one input terminal (1) and at least two output terminals (3a, 3b, 3c), the at least two output terminals (3a, 3b, 3c) being connected to respective amplifier branches (4a, 4b, 4c) of the multi-path amplifier (10) and having power linear output with respect to each other and with respect to the input signals at the input terminal; and 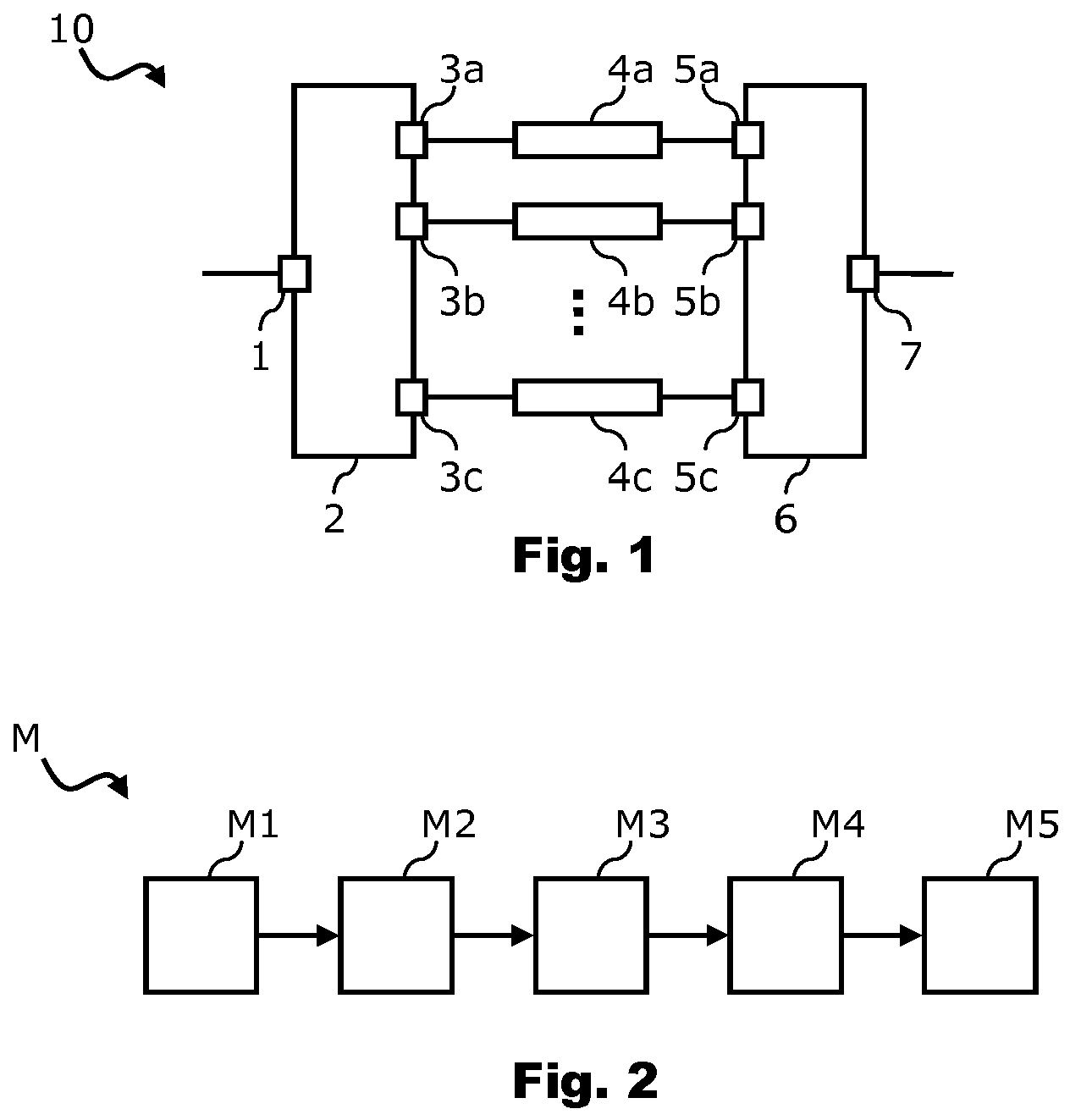