[0003] A fluorescence microscope is a light microscope used to study properties of organic or inorganic substances using fluorescence instead of, or in addition to, reflection and absorption. The fluorescence microscope is based on the phenomenon that certain material emits energy detectable as visible light when irradiated with the light of a specific wavelength. The sample can either be fluorescing in its natural form (like chlorophyll) or it may be treated with a fluorescing stain.
[0004] A basic widefield fluorescence microscope that is well known in the art includes a light source and several filters that correspond to a wavelength matching a fluorescence stain. An excitation filter is provided for selecting an excitation wavelength of light from the light source, and a dichroic beamsplitter reflects light from the light source to illuminate the specimen. The illuminated light is separated from the much weaker emitted fluorescence with an emission filter. The fluorescing areas can be observed in the microscope and shine out against a dark background with high contrast.
[0005] A structured illumination imaging system uses much the same principle as the widefield imaging system described above, with the key that only a portion of the sample is illuminated at any one time. A large portion of the excitation light is blocked, while a pattern of unblocked illumination is swept over the entire sample such that each area of the sample receives approximately equal excitation light. Typically, multiple images are captured at discrete intervals in this process and a single fully illuminated image is generated by an image processing algorithm which analyzes the discrete input images to construct a corresponding output image. This output image is superior to an image captured using simple widefield imaging techniques due to the reduction in light gathered from out of focus areas of the sample, resulting in improved signal to noise ratio, higher lateral and axial spatial resolution, or both.
[0006] A confocal imaging system is a type of structured illumination system. A confocal imaging system can be used to improve the signal to noise ratio or increase the optical resolution. In a confocal imaging system, the objective is to image only the thin part of the sample that is in focus, rejecting all light from above and below the focus plane. This is in contrast to more basic wide-field imaging, where out-of-focus elements still appear as significant elements in the image.
[0007] Conventional confocal systems can be divided loosely into single-point confocal and multi-point confocal systems. In single-point confocal systems the illumination used to excite the dye is passed through a pinhole onto the sample, then the fluorescent emission from the sample is passed through another pinhole into a photodetector. The pinhole size and optics are designed to accept light back from only those photons emitted from the thin slice of the sample that is in focus.
[0008] The technique can only image one point at a time. Accordingly, the beam or the sample must be scanned back and forth in two dimensions to construct a single 2D confocal image. The beam in such conventional systems is typically scanned over a fixed sample, which requires very fast, very accurate mirrors to be synchronized to the photodetector.
[0009] In a multi-point confocal system the operational principle is the same as above but multiple points are imaged in parallel. Typically a disk with a pattern of pinholes is spun such that the illumination is swept over the field of view during an exposure. An example spinning-disk confocal imaging system is illustrated in figure 5.
[0010] As can be seen in figure 5, light 802 from the light source is incident on a first disk 804 that includes a plurality of focusing lenses 806 that focus the light onto a pinhole mask 810 included in a second disk 808. Light 802 passing through pinhole mask 810 is then focused onto the specimen 814 via objective lens 812. The light 802 is absorbed by fluorophores, which causes them to emit light 816, which passes back through objective lens 812 and pinhole mask 810 and is incident on mirror 818. Mirror 818 reflects the emitted light 816 onto a sensor 822, e.g., via optics 820, where it can be detected.
[0011] A system such as that illustrated in figure 5 can capture images faster than a single-point system but such a system also requires more complex synchronization between pinholes and detectors.
[0012] WO2014/071390 A1 relates to systems and methods for minaturised imaging of biological specimens.
[0013] EP 2 367 042 A1 relates to a confocal microscope system.
[0014] US 4 609 264 relates to microscopic inspection of flat rectangular objects "Fluorescence microscopy", by Lichtmann et al, HHS Public access author manuscript, Vol .2, No. 12, ISSN 1548-7091, December 2005, relates to a fluorescence microscope.

[0020] Features, aspects, and embodiments are described in conjunction with the attached drawings, in which:

Figure 1 is a diagram illustrating an example flouresence imaging system configured in accordance with one embodiment;

Figure 2 is a diagram illustrating an example embodiment of a light cube implementation of at least some of the components of figure 1;

Figure 3 is a diagram illustrating an example control system for controlling the operation of the illumination system of figure 1 in accordance with one embodiment;

Figure 4 is a diagram illustrating an example pinhole mask that can be used in the system of figure 1, and in particular in the light cube implementation of figure 2 in accordance with one embodiment;

Figure 6 is a block diagram illustrating an example wired or wireless system that can be used in connection with various embodiments described herein;

Figure 7 is a diagram illustrating an example translation apparatus that can be used with the system of figure 1, and in particular the light cube of figure 2 in accordance with one embodiment;

Figure 8 is a diagram illustrating an example method for calibrating the system of figure 1 in order to eliminate the need for a emissions path pinhole mask in accordance with one embodiment;

Figure 9A shows the determined positions of the pinholes for an image; and

Figure 9B shows a close-up of a portion of the image with the determined positions overlaid versus the raw data.

imaging optics (106) mounted within the housing, the imaging optics configured to focus illumination from an illumination source (102) such that an in-focus pattern of light corresponding to a pattern on a photomask (108) is projected onto a sample,

a reflector (110) mounted within the housing and configured to reflect the illumination to a sample,

a mounting structure configured to allow a plurality of imaging apparatus to be mounted on or within the system; 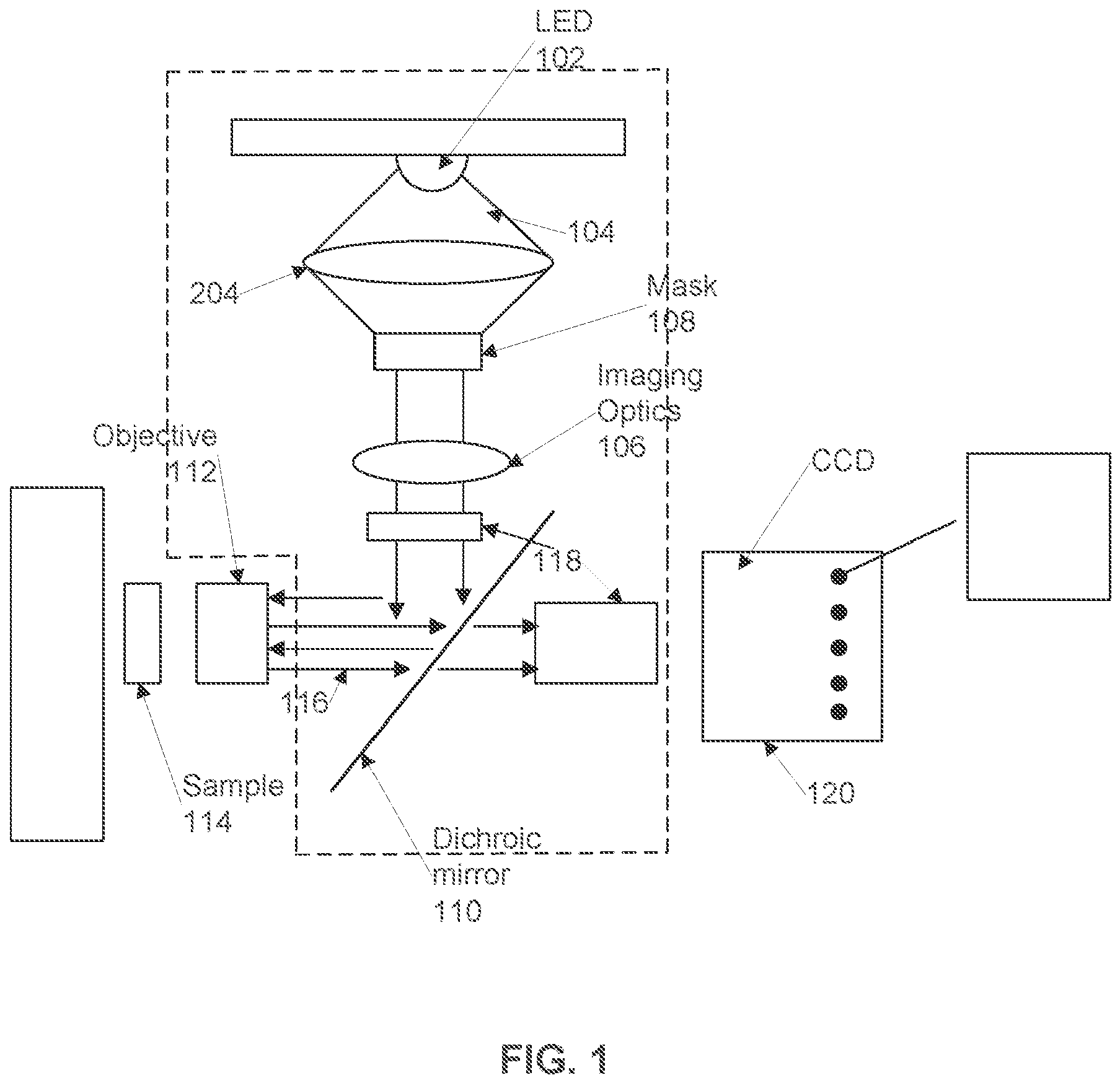 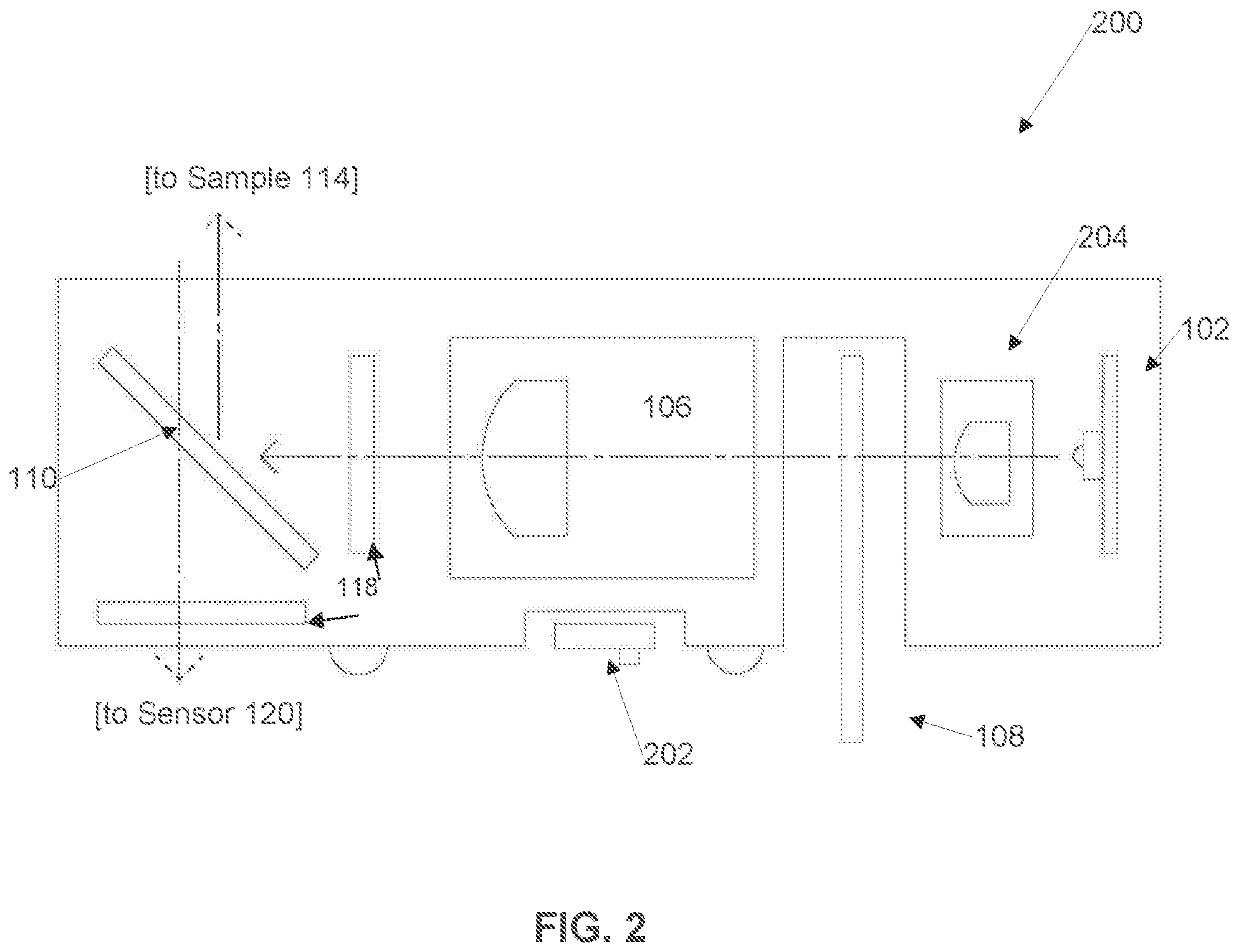 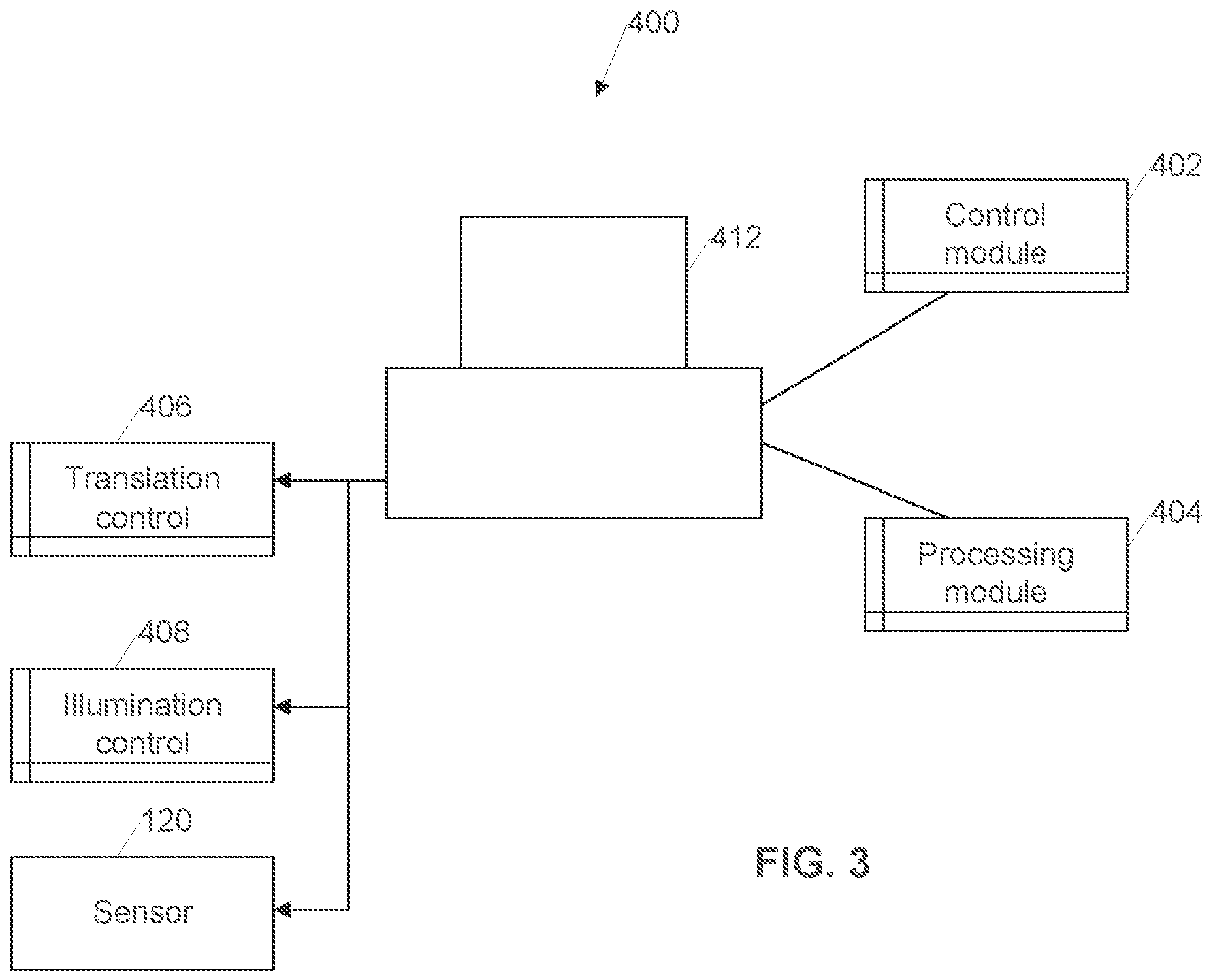 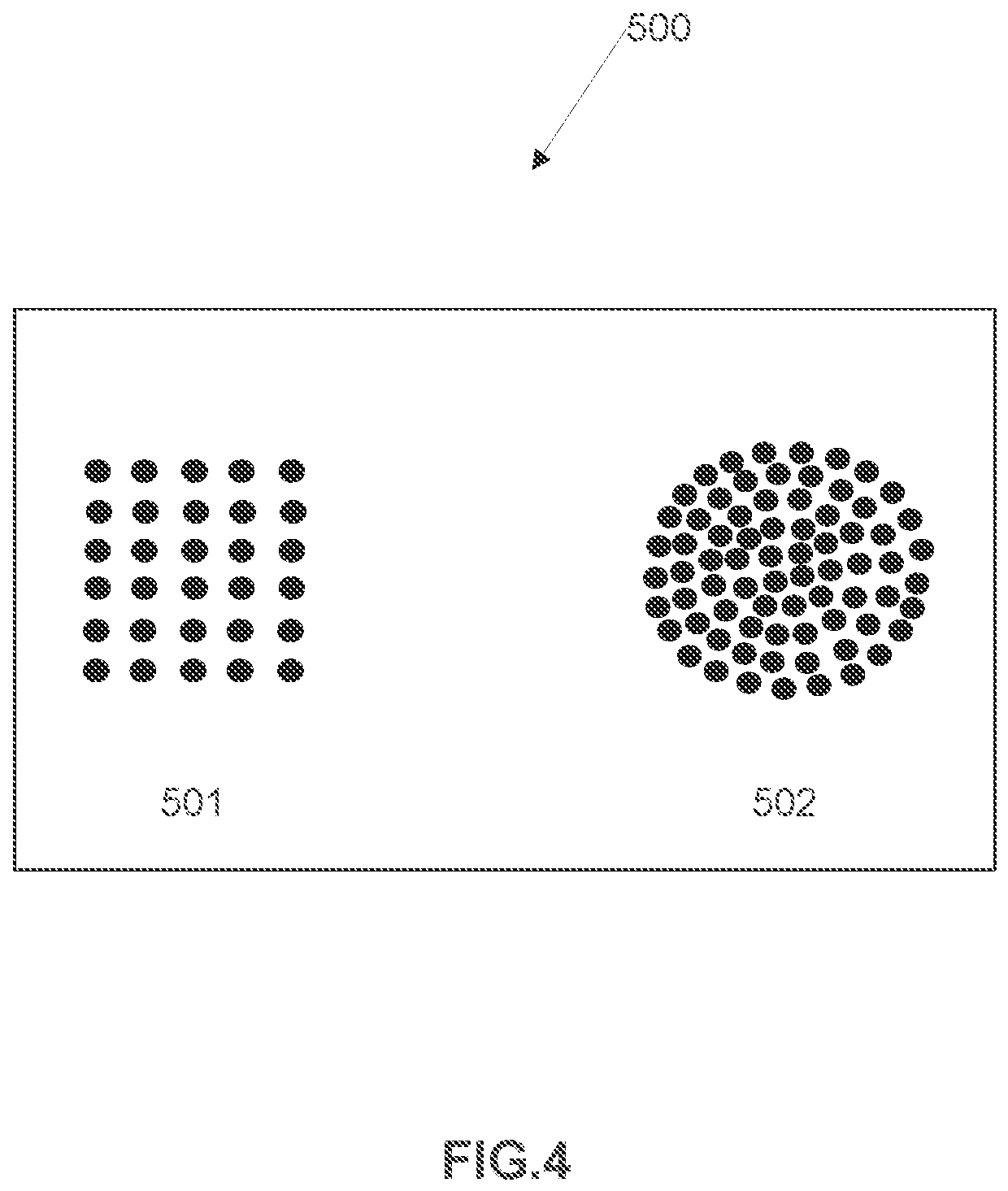 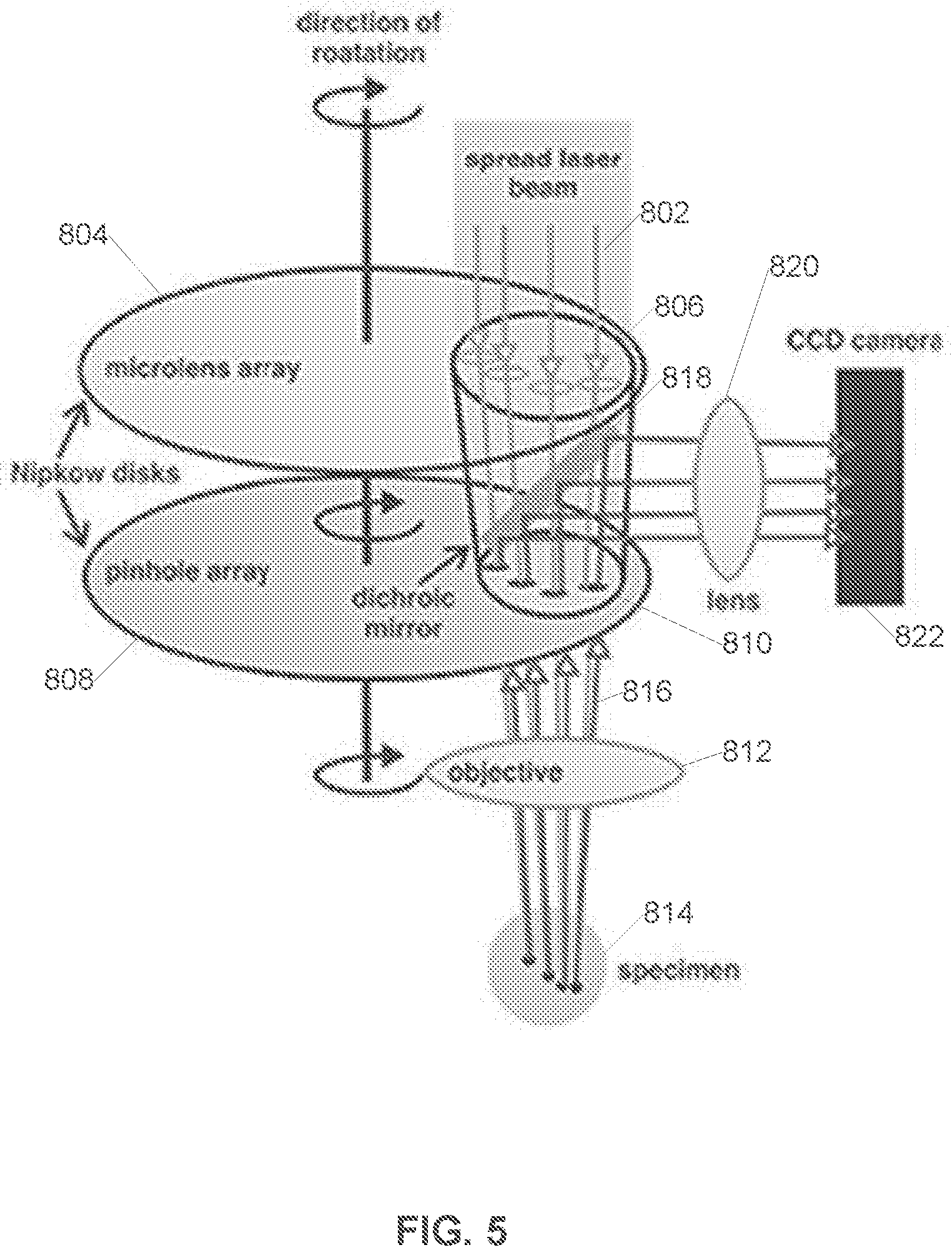 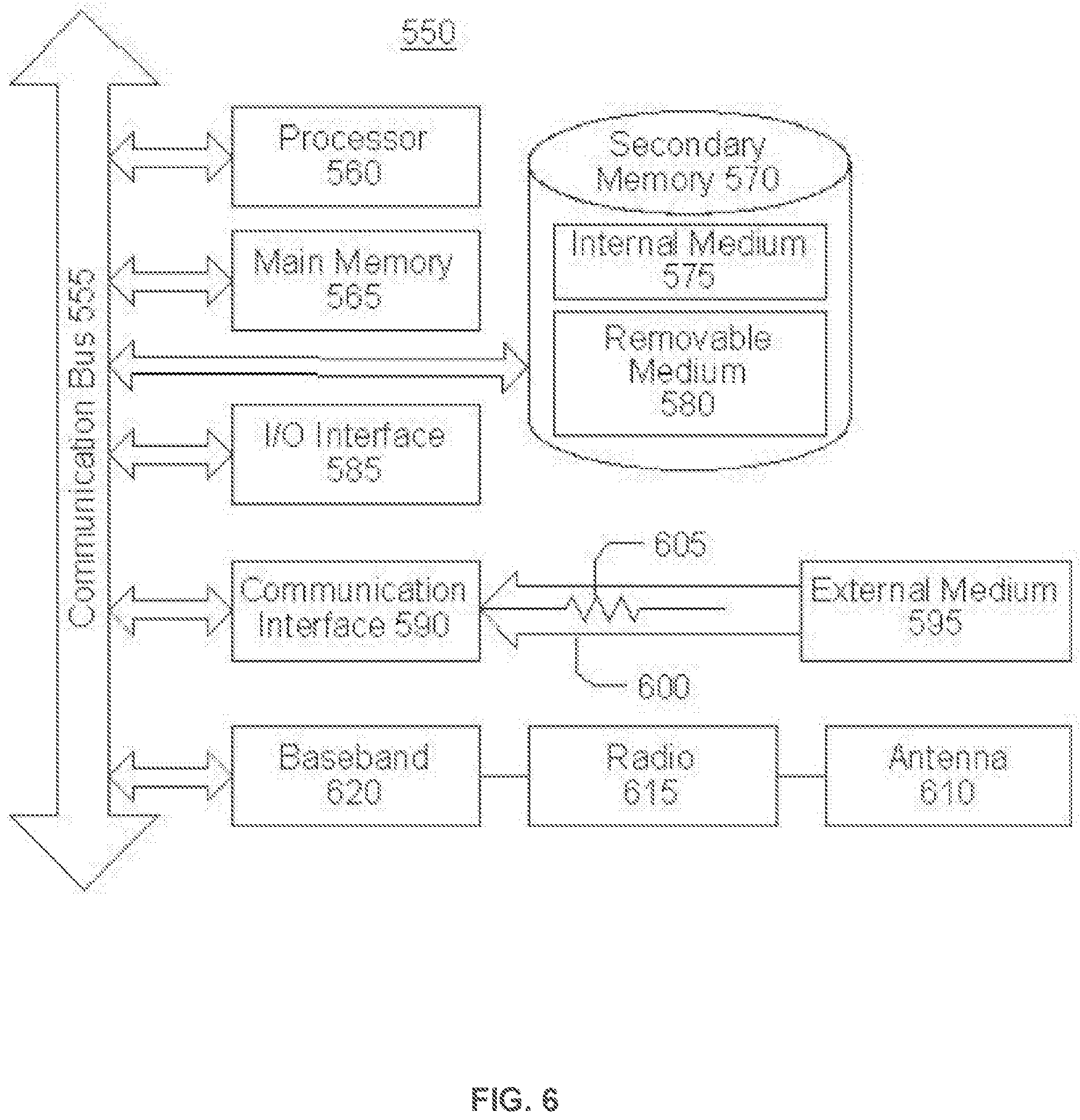 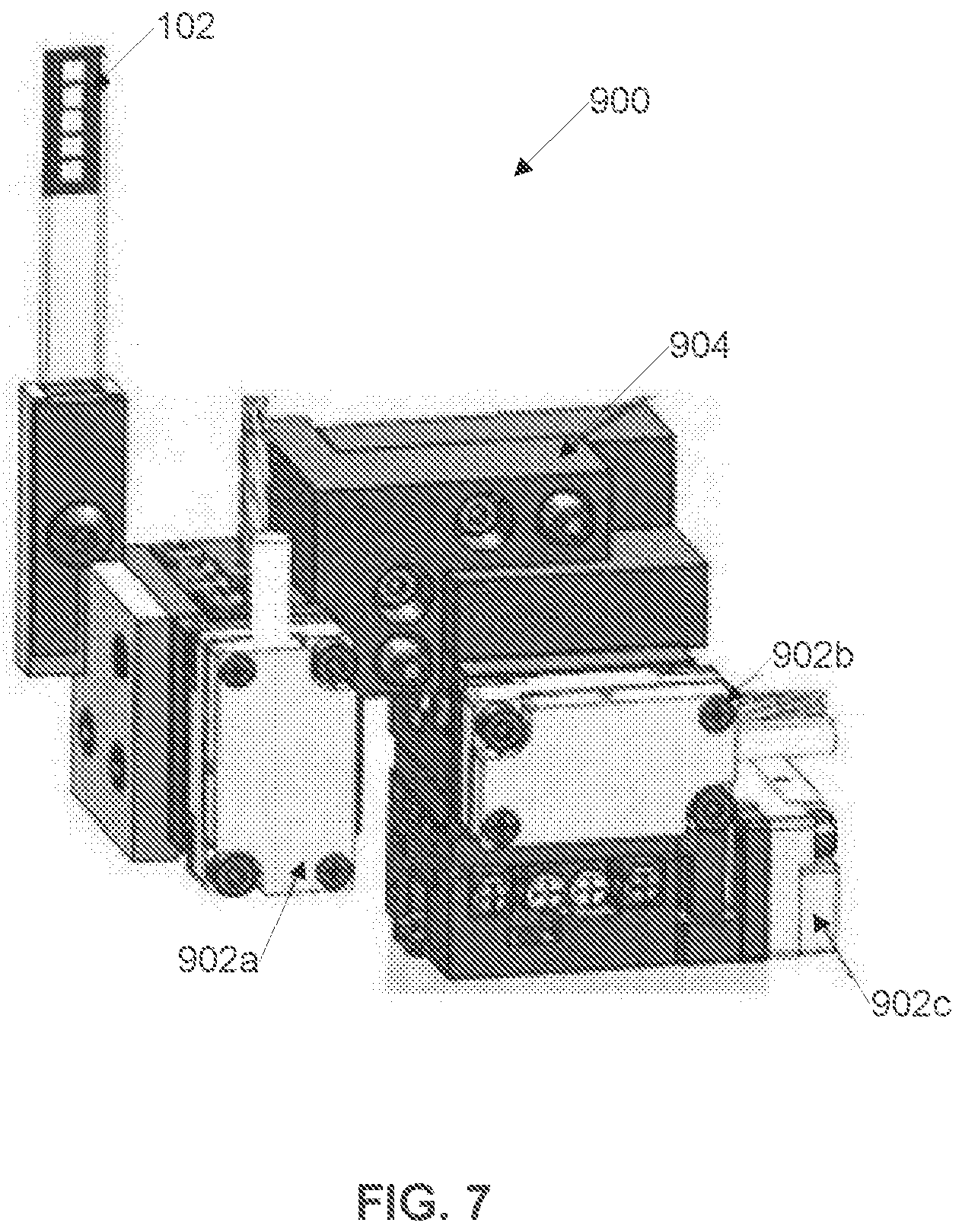 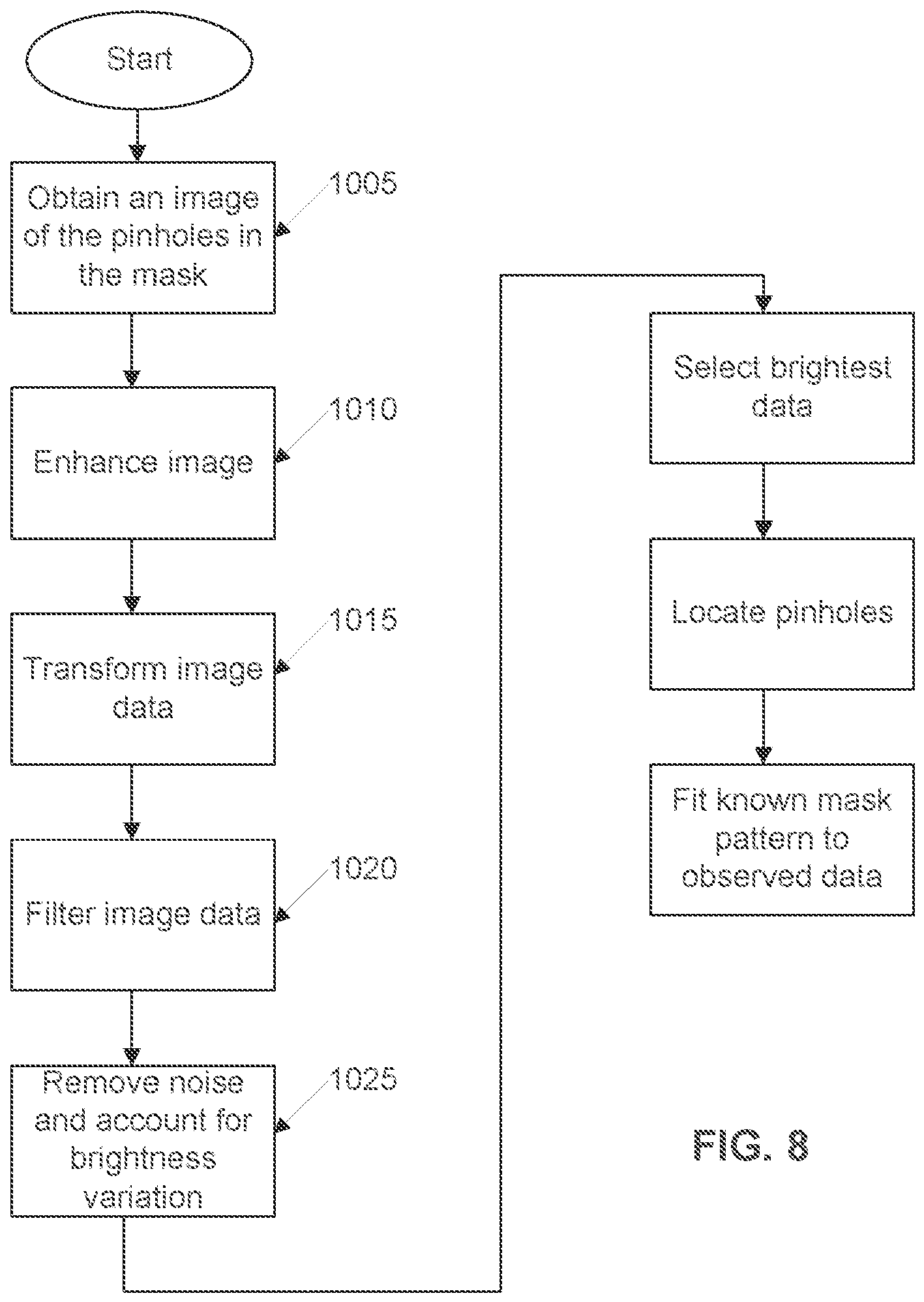 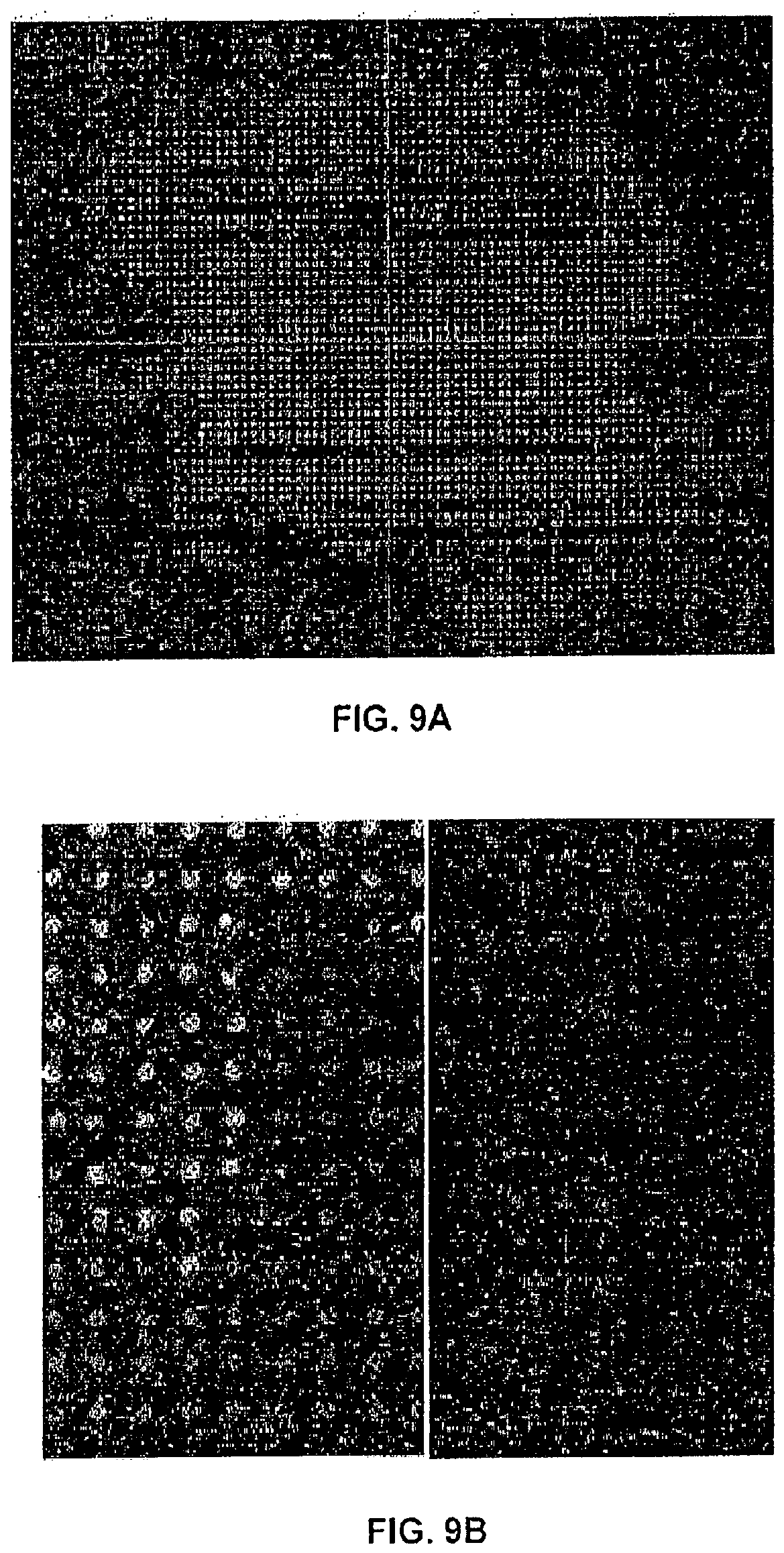