[0001] The present disclosure relates to string trimmers and cutting head and spool designs for winding cutting line onto the spools.
[0002] String trimmers are widely used by residential consumer and landscaping professionals to cut grass and other vegetation by using a flexible cutting line extending out from a rotating head. The cutting line wears down during use and requires regular replacement.
[0003] One way users have replaced cutting line is to remove the used up spool, and replace it with a new spool with cutting line already wound on. This can be costly because in addition to replacing just the cutting line, the spool is being replaced as well.
[0004] Another method has been for users to wind new cutting line onto the used up spool themselves. This often requires the user to disassemble the cutting head, remove the spool, wind line onto the spool, and then replace the spool back onto the cutting head. This can be cumbersome and time consuming, especially for professional landscapers where time is of the essence.
[0005] EP2517547A1 discloses a rotary cutter for a mower that includes: a cord; a reel housing the cord, a case and a cover housing the reel therein; a pressing body rotating the reel; and a resilient element elastically supporting the case and the cover. The rotary cutter is configured such that the reel axially moved by rotation of the pressing body so as to come into contact with the pressing body, and the cord is wound around the reel while being clamped in a clearance created between the reel due to the axial movement of the reel.
[0006] Accordingly, there remains a need in the art for a simple and quick mechanism to allow a user to replace cutting line on a string trimmer.
[0007] WO2016/150514A1 discloses a hand held power tool that receive information indicative of a type of cutting equipment attached to the hand held power tool based on operation of a working assembly in a selected direction of rotation. The working assembly is configured to be bi-directionally rotatable to perform a cutting function using cutting equipment attachable to the hand held power tool.
[0008] The drawings described herein are for illustrative purposes only of selected embodiments and not all possible implementations, and are not intended to limit the scope of the present disclosure.

Figure 1 is a perspective of a string trimmer in accordance with the teachings of the present disclosure;

Figure 2 is a view of a user holding the string trimmer of Figure 1;

Figure 3 is a view of the string trimmer cutting head of Fig. 1;

Figure 4 is an internal view of a winding button of Fig. 1;

Figs. 5 is a circuit diagram of a first embodiment of the invention;

Fig. 6 is circuit diagram of a second embodiment of the invention;

Fig. 7 is a circuit diagram of a third embodiment of the invention;

Fig. 8 is a circuit diagram of a fourth embodiment of the invention;

Fig. 9 is a circuit diagram of a fifth embodiment of the invention;

Fig. 10 is a circuit diagram of a sixth embodiment of the invention; and

Fig. 11 is a circuit diagram of a seventh embodiment of the invention;

the motor operationally connected to the spool to rotate the spool in a normal operational mode for cutting vegetation having a first direction and first speed; and characterized by:

a button (26) configured to actuate a winding mode for winding cutting line onto the spool,

wherein, in the winding mode, the motor is configured to rotate the spool in a second direction, opposite the first direction, and

wherein, in the winding mode, the motor is configured to rotate the spool at a second speed that is slower than the first speed.

a control module (28) connected to the motor to control operation of the motor,

wherein the button (26) is connected to the control module.

4. The string trimmer of any of any preceding claim, wherein a main trigger (18) for actuating the normal operational mode is located on a second end of the shaft (12).
5. A method of winding cutting line onto a spool comprising the steps of:

providing a string trimmer having a motor, a cutting head (14) with a spool housing and a spool, and a winding button (26);

inserting new cutting line into the spool; and

actuating the winding button so that the spool rotates and winds cutting line onto the spool, and characterised in that 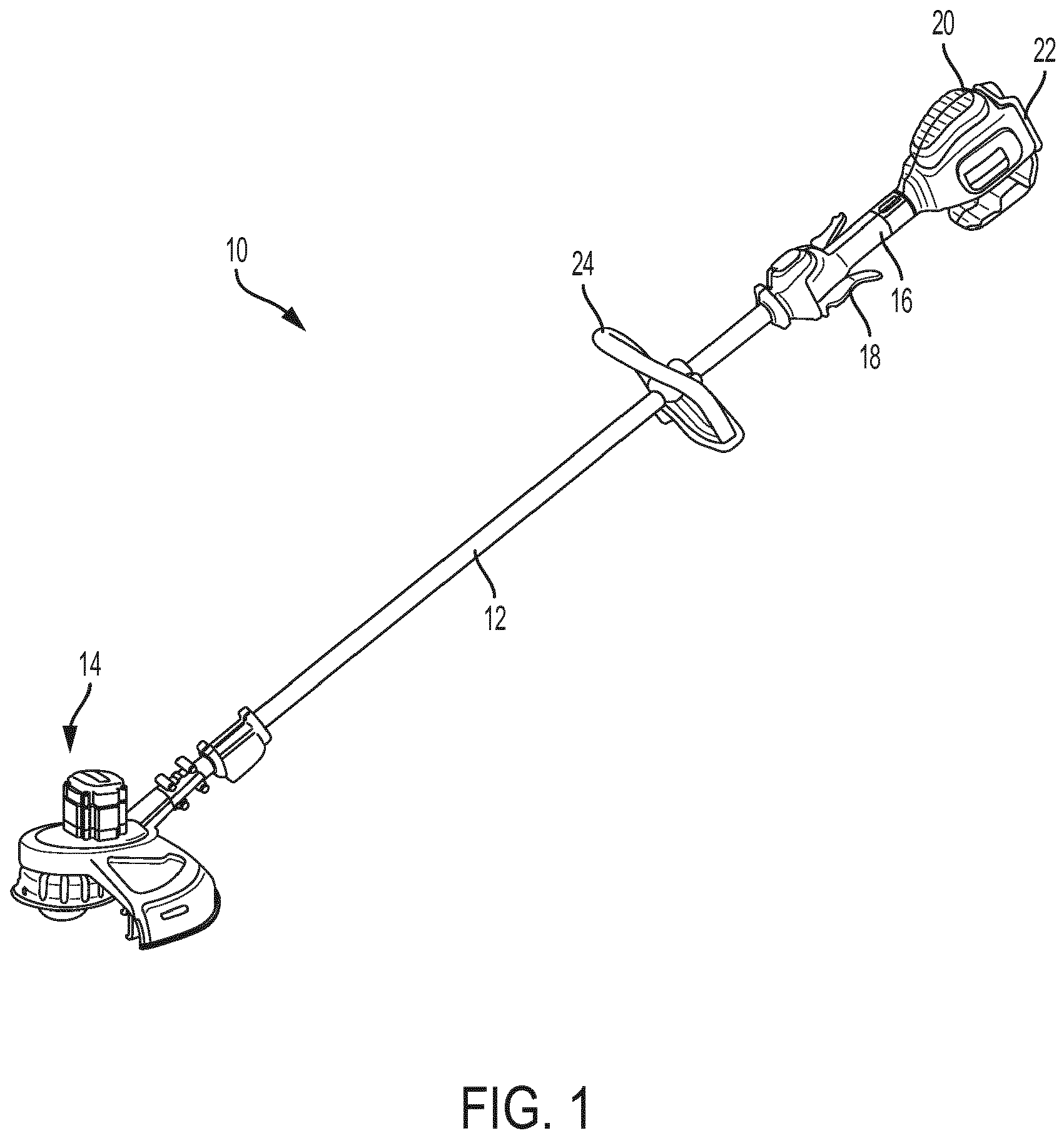 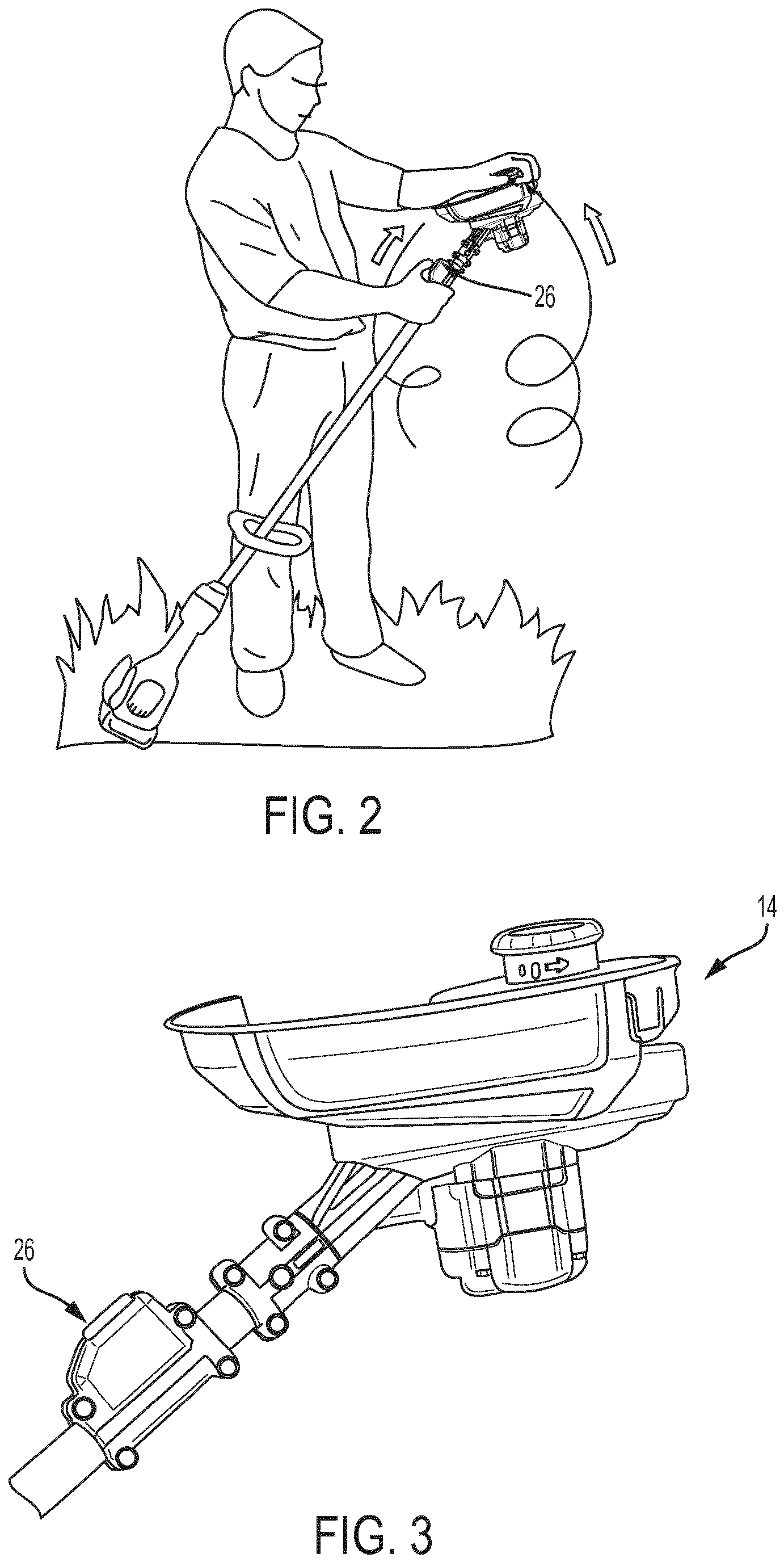 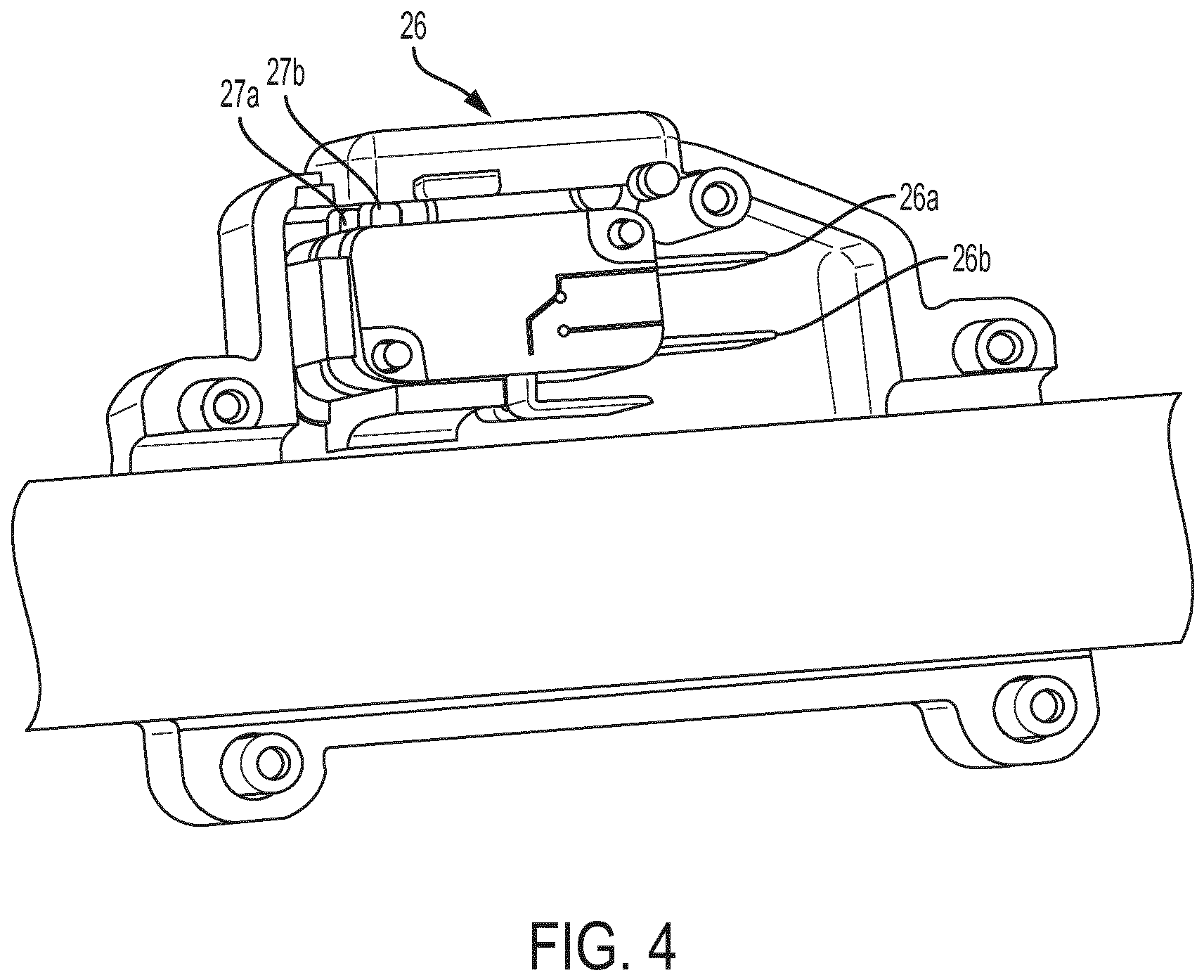 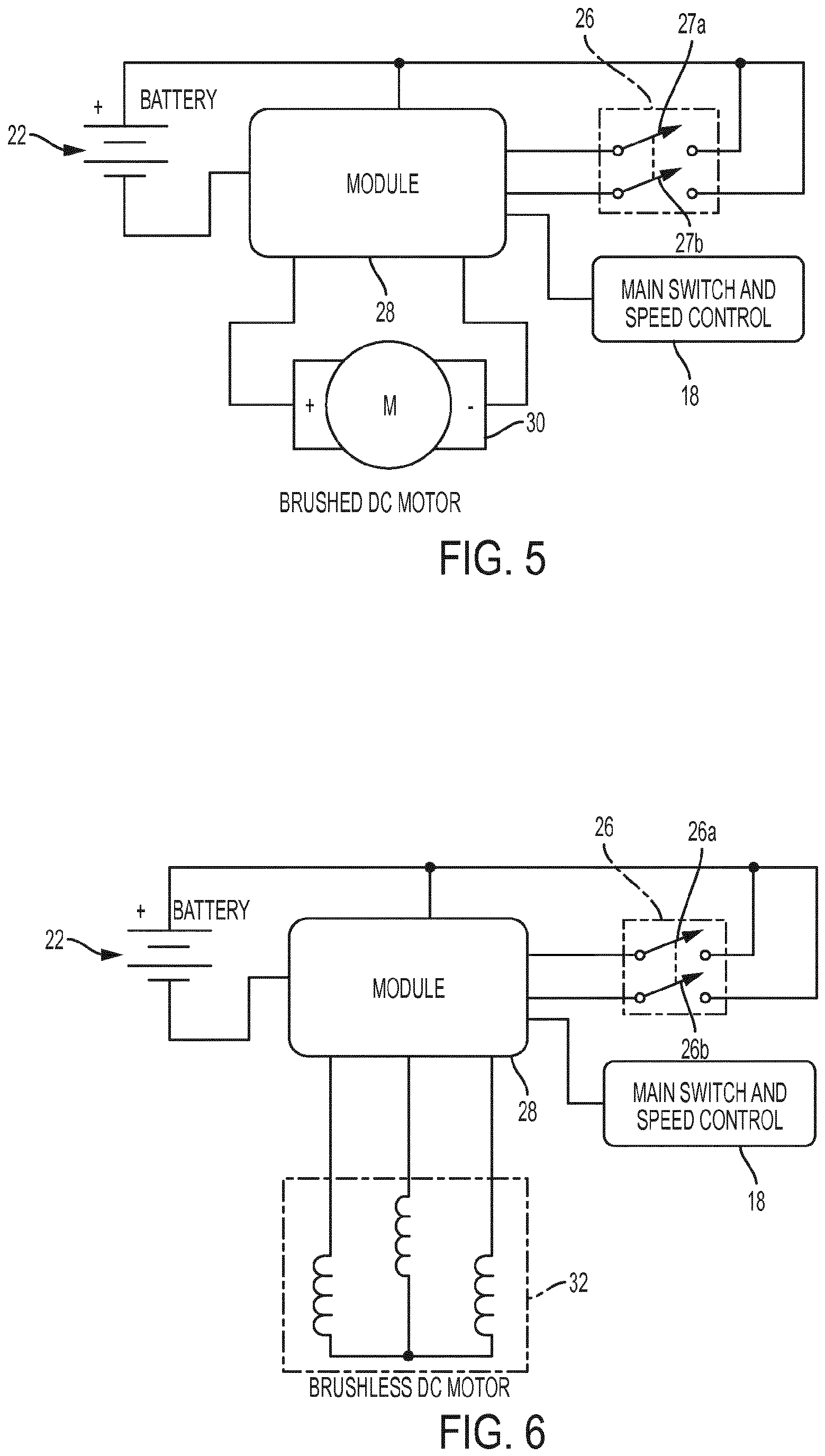 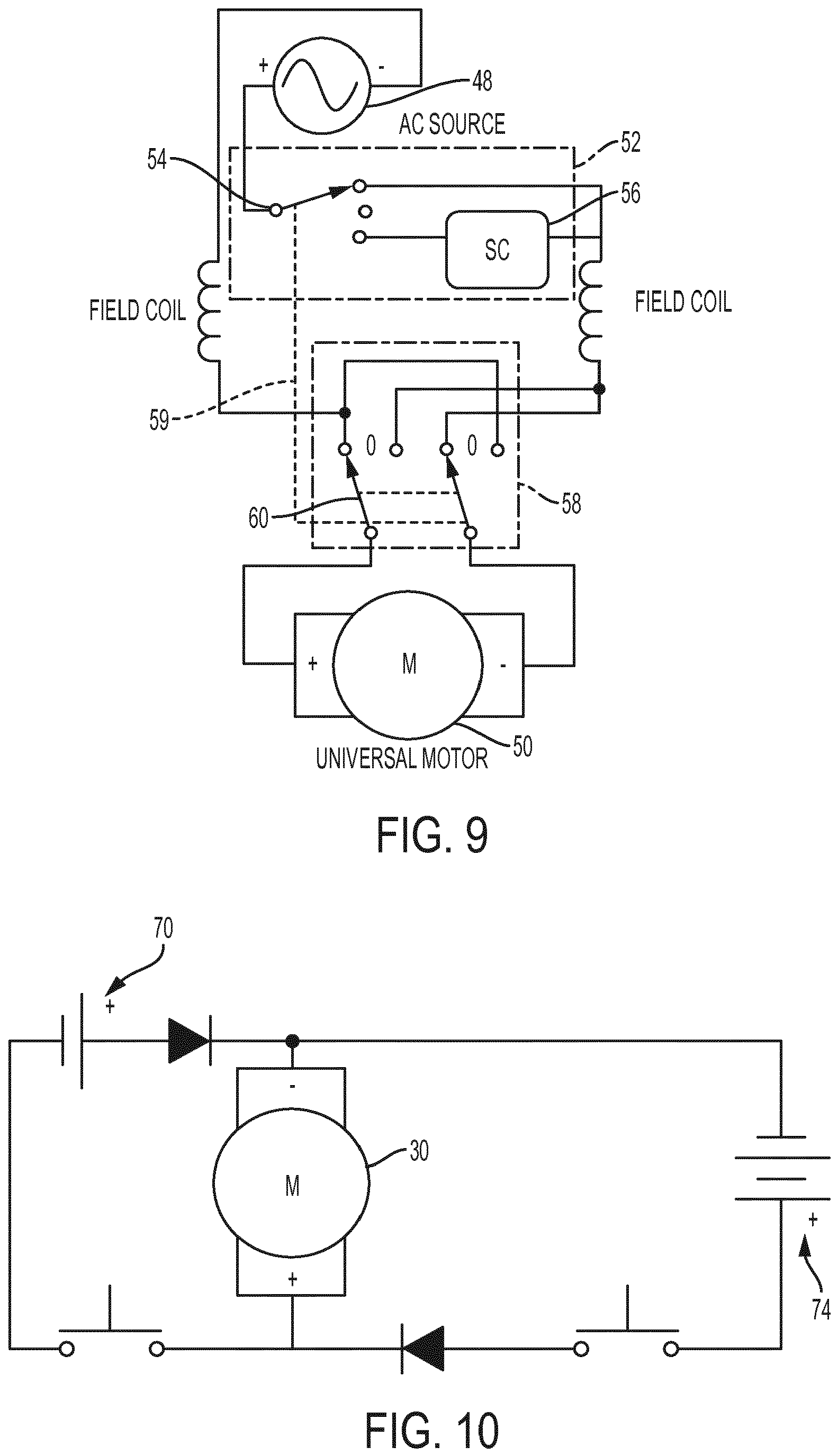 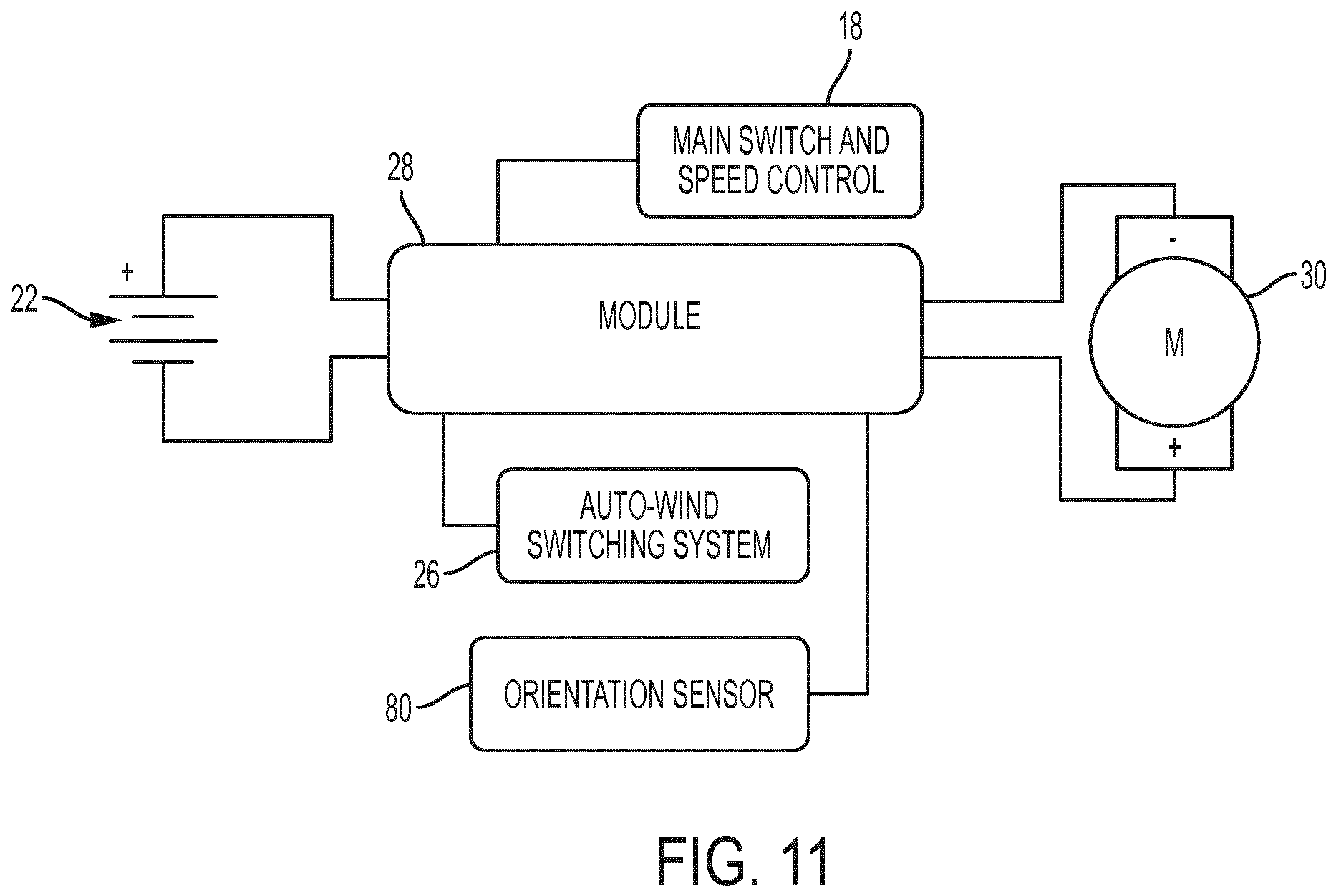