[0001] The present disclosure relates in general to the field of hydrocarbon drilling. More particularly, embodiments of the present invention relate to a system and method related to drilling dysfunctions.

[0002] Signal dysfunction, also known as outlier, anomaly, novelty or event detection, represents one of the most challenging subjects in real time data mining due to the difficulties in achieving computational efficiency, causality, and minimum information drift (i.e., time shifting). In the particular case of real time well drilling operation, it is critical to develop mechanisms that are capable of detecting dysfunctions that would eventually lead to costly drill system failures.
[0003] WO2011017627A1 describes a method for calculating signal dysfunction in real time by calculating an envelope function for a drilling parameter and deriving a mean function, with the deviation from the mean being indicative of drilling dysfunction.

BRIEF SUMMARY OF THE DISCLOSURE

[0004] According to the invention a method is provided as set out in the appended claim.
[0005] The present disclosure addresses limitations in the art by providing a system and method for computing dysfunctions via amplitude envelopes that deviate from a mean (normal) state behavior. The envelope function is constructed from a recursive application of the maximum signal value within a given window size. Analogously, the mean function allows for estimating the normal state of the signal within the same predefined window size. Hence, the sequence of maximum and mean signal values can be successively smoothed out to generate a dysfunction profile that induces minimum model drift. A dysfunction operator is defined as the relative change of the envelope with respect to the mean signal at each temporal point. The aforementioned operations are causal and computationally affordable as relative short moving windows are required to trail the current point. Therefore, the proposed envelope and dysfunction calculations are amenable for any source of data streams measured at high sample rates. The effectiveness of the present invention is validated on several channels representing multiple physics in real time field drilling operations.
[0006] The drilling vibration also causes the drill string to deviate from ideal, uniform circular rotations. The mapping of the non-uniform rotations of the drill string leads a better understanding of the dynamics of drill-string dysfunctions. The present invention calls for using measured acceleration data to map the positions of drill-string motions continuously and produces various attributes to quantify the drilling dysfunctions. 2D and 3D visualizations of various dysfunction attributes describes how the vibration affects the drill-string motions. When combined with other information, it may be used to reduce drilling vibration.
[0007] The present invention enables the development of efficient and robust workflows for controlling and optimizing well drilling operations in real time. Envelopes provide a meaningful representation for computing dysfunctions and classifying and summarizing signal trends as well. Dysfunctions are critical for proactively detecting events that may lead to equipment failures. In the particular case of real time drilling, results should aid at improving rate of penetration and minimizing well bit failures. Extensions of the present invention could be oriented to impact any automated activity that require an efficient way to determine envelopes and dysfunctions in real time signals as produced by sensors, satellite and other mobile devices.
[0008] Implementations of the present invention can include one or more of the following features: the method identifies dysfunctions for detecting equipment failure; such equipment comprises drilling equipment; the signal data comprises acceleration data; the acceleration data may be translated from a local moving coordinate frame to a global stationary coordinate frame; the vector cross product of radial acceleration and axial accelerations can estimate the tangential acceleration; the signal may include: axial vibration, down-hole RPM, down-hole torque, gravitational acceleration, centripetal acceleration, radial acceleration, tangential acceleration, distance from surface, surface RPM, surface torque, hole depth, and rig state.

[0009] The foregoing and other objects, features, and advantages of the disclosure will be apparent from the following description of embodiments as illustrated in the accompanying drawings, in which reference characters refer to the same parts throughout the various views. The drawings are not necessarily to scale, emphasis instead being placed upon illustrating principles of the disclosure:

FIG. 2 depicts a transformation time data signals into envelope data using various calculations of prior art and the present invention.

FIG. 3 depicts an exemplary dysfunction profile for the data presented in FIG. 1-2.

FIG. 4 depicts a series of envelope information with regard to RPM data obtained from the field.

FIG. 5 depicts a transformation of RPM data signals into dysfunction data using various calculations of prior art and the present invention shown using the maximum operator (for w=40).

FIG. 6 depicts a transformation of RPM data signals into dysfunction data using various calculations of prior art and the present invention shown using a smaller window size (for w=10).

FIG. 7 depicts envelopes using various calculations of prior art and the present invention as applied to segmented data.

FIG. 8A and 8B depicts envelope, mean and dysfunction profiles for more than 10,000 samples of torque data.

FIG. 9A and 9B depicts the performance of the present invention when the signal displays frequent changes in sign.

FIG. 10 depicts performance of the present invention when the signal displays frequent changes in sign, as depicted by root mean square (RMS) envelopes.

FIG. 11 depicts a block diagram illustrating architecture of a hardware device in accordance with one or more embodiments of the present invention.

[0044] Since the dysfunction could still be a highly oscillatory function, the present invention may further achieve a smoother representation by optionally performing moving averaging on the resulting profile:

1. A method for analysis of drilling equipment failure, including a real-time calculation of signal dysfunction in measured acceleration data, the method comprising:

(a) determining, via a computing device, an amplitude envelope further comprising configuring an envelope function (403, 1002) from a recursive application of the maximum signal value within a given window size;

(b) configuring, via the computing device, a mean function (1003) for estimating a normal state of the signal within said window size;

(c) determining in real time, via the computing device, a dysfunction operator , defined as the relative change of the envelope with respect to the mean function at each temporal point, to generate a dysfunction profile (301, 302)
by comparing said envelope function to said mean function; and

(d) mapping, via the computing device, the various attributes of said comparison, wherein mapping comprises applying the dysfunction profile to a drilling activity producing the signal; characterised in that algorithms i, ii and iii are used to calculate the envelope and mean functions and determine the dysfunction profile

wherein "yenv" means the amplitude envelope; wherein the loop on index i sweeps each sample point in the signal represented by vector variable y; variable w represents a predefined window size; a trailing buffer, namely vector variable 1, including the temporal sample points from i-shift+1 to i and of size less than w is controlled by the value of variable shift; and moving_average() is a moving average operation on the envelope defined within a given window m and is recursively applied as a new sample point in time is assimilated;

ii. mean function, with which a smooth mean value in a moving window is computed: For i = 1,2,...

iii. dysfunction operator, in which step 3) represents a pointwise calculation of a ratio between the difference of the amplitude envelope and the mean value of the signal, a pointwise division over the mean value being performed at each trailing point:
For i = 1,2,... 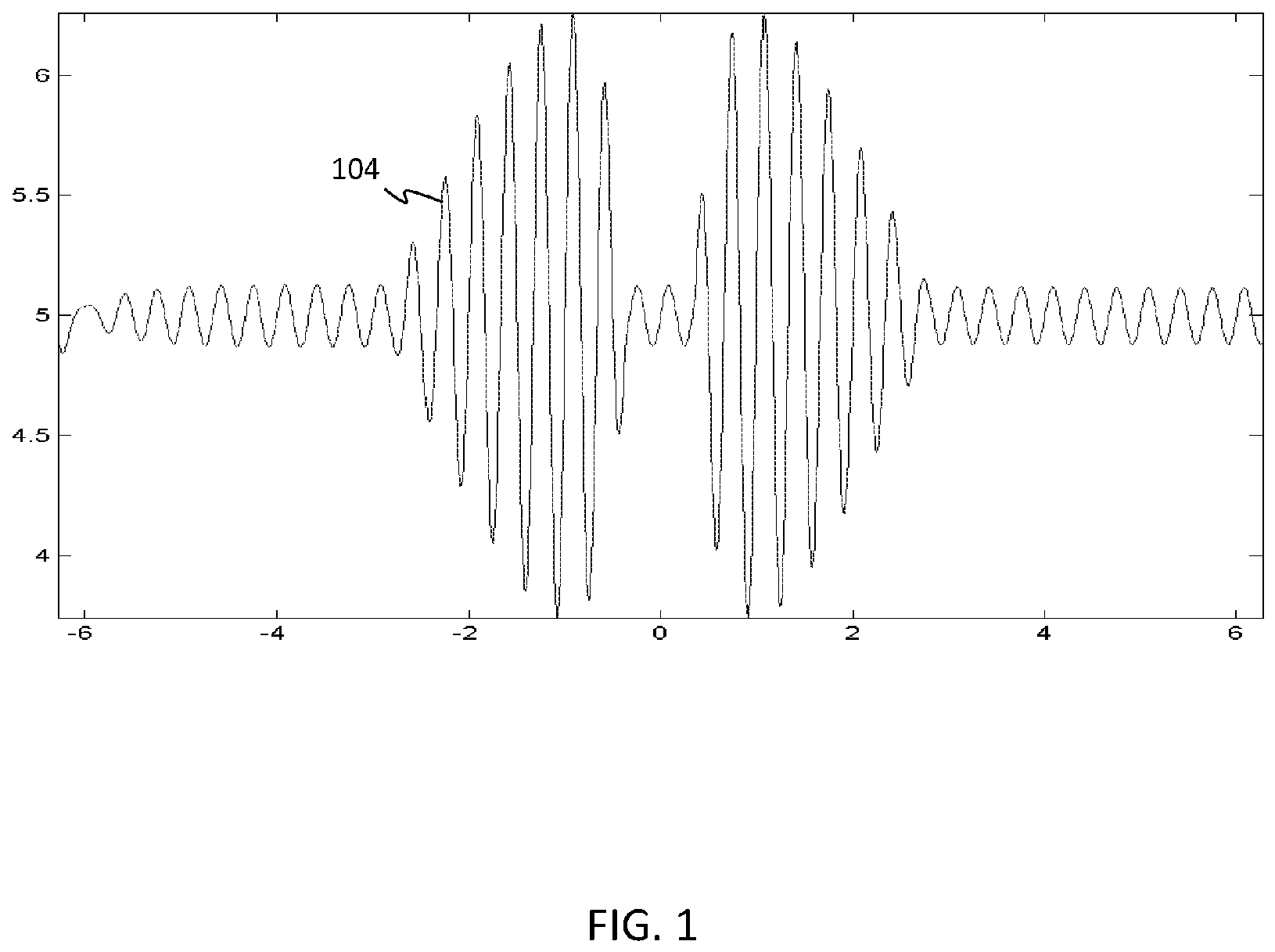 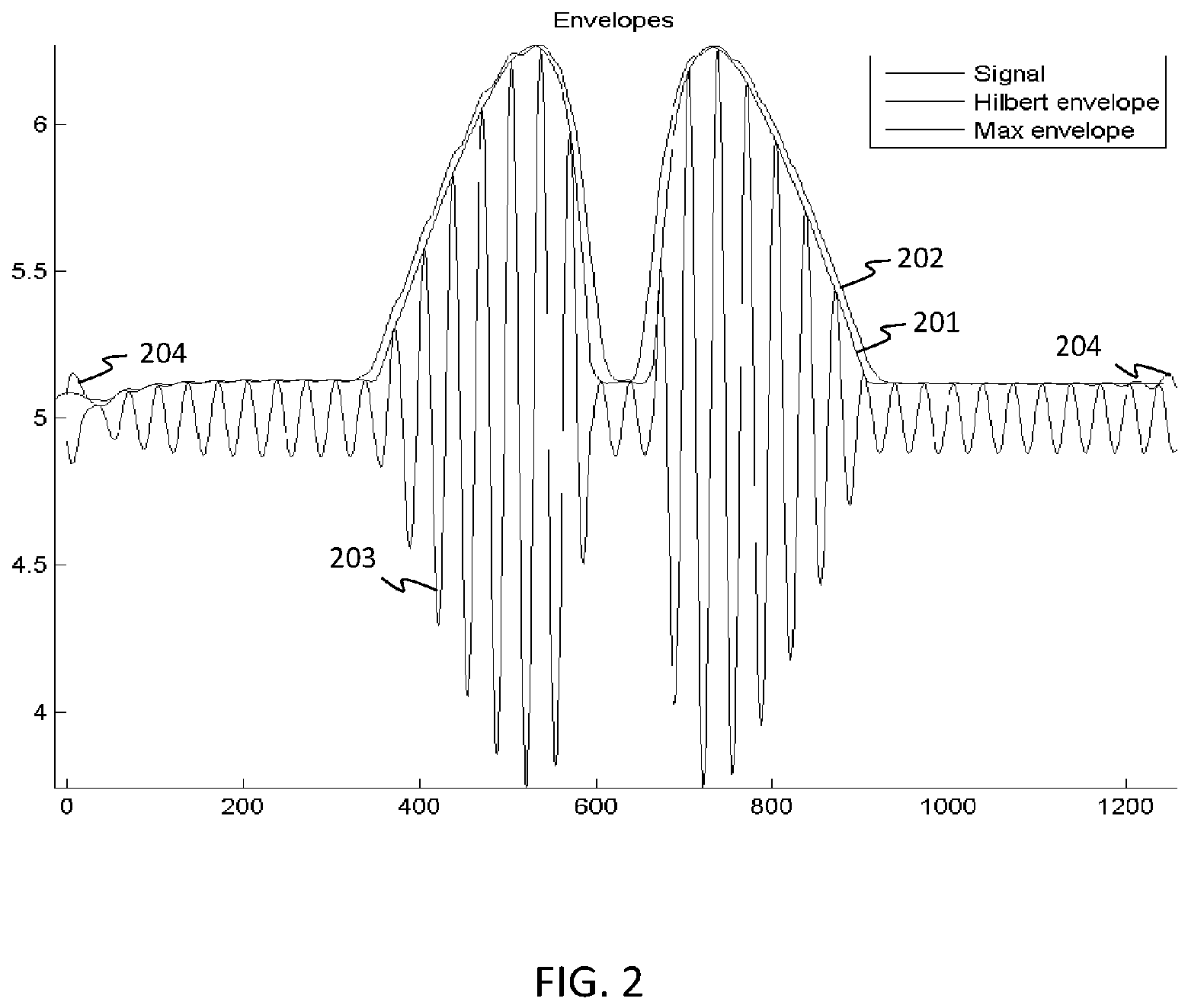 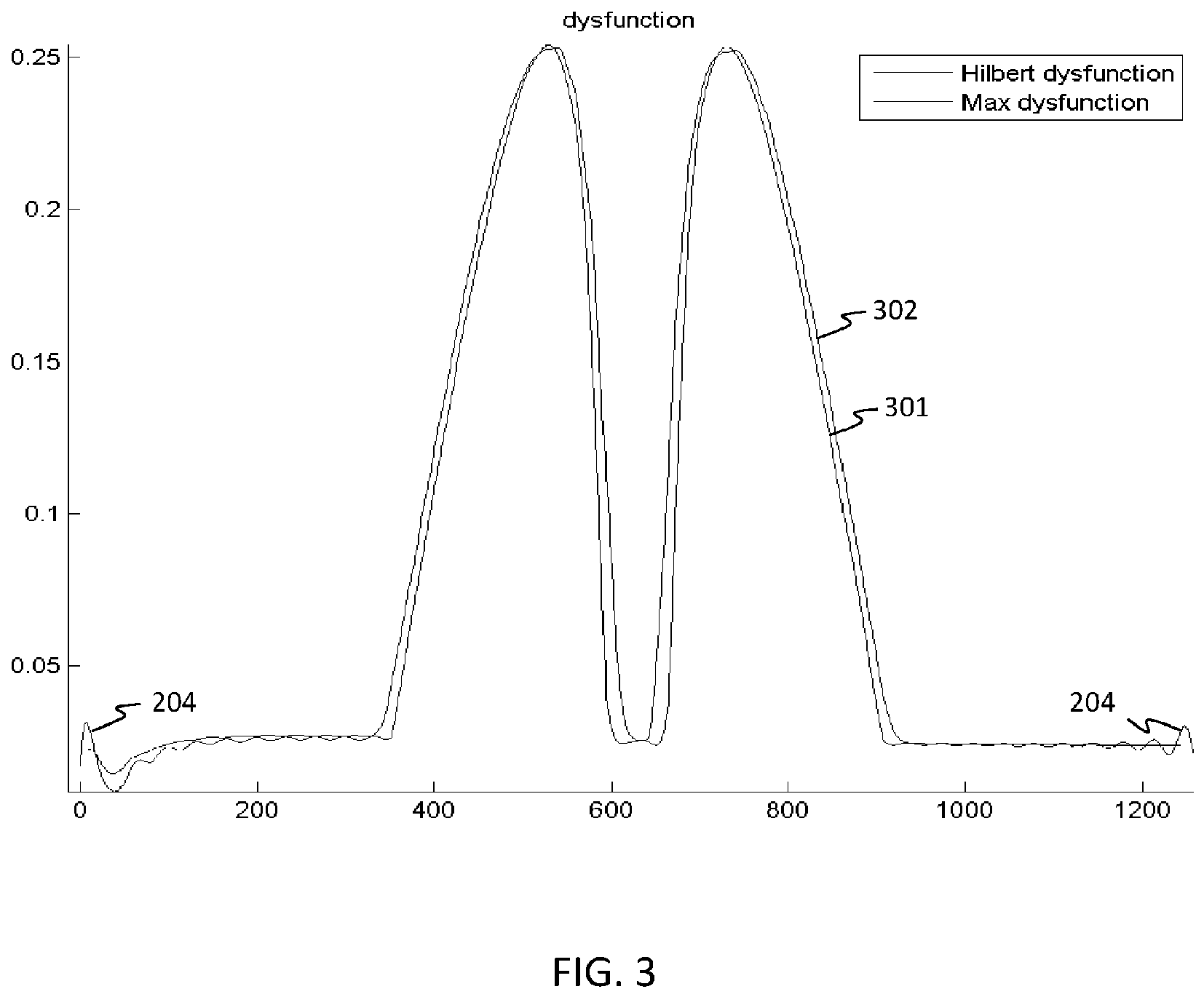 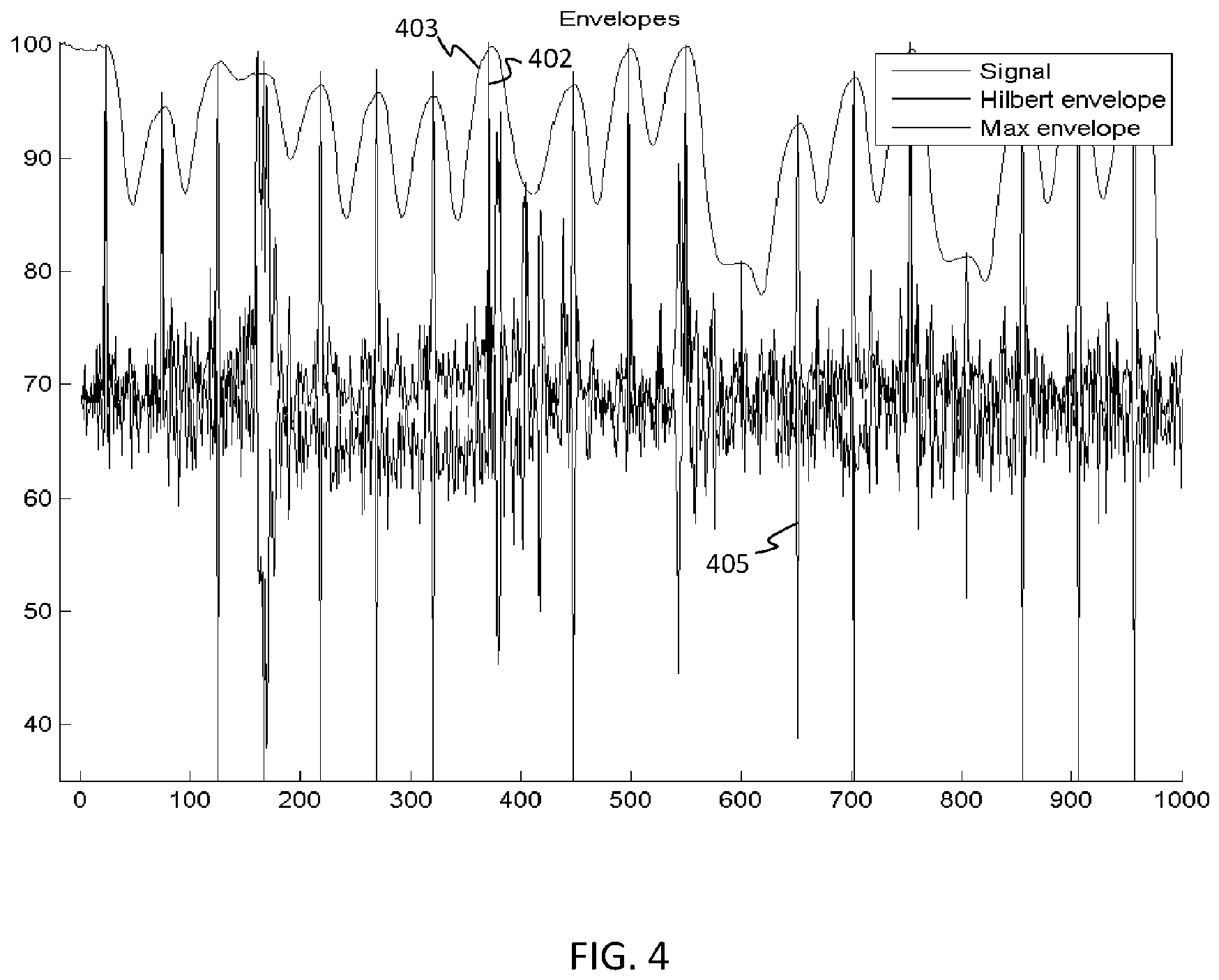 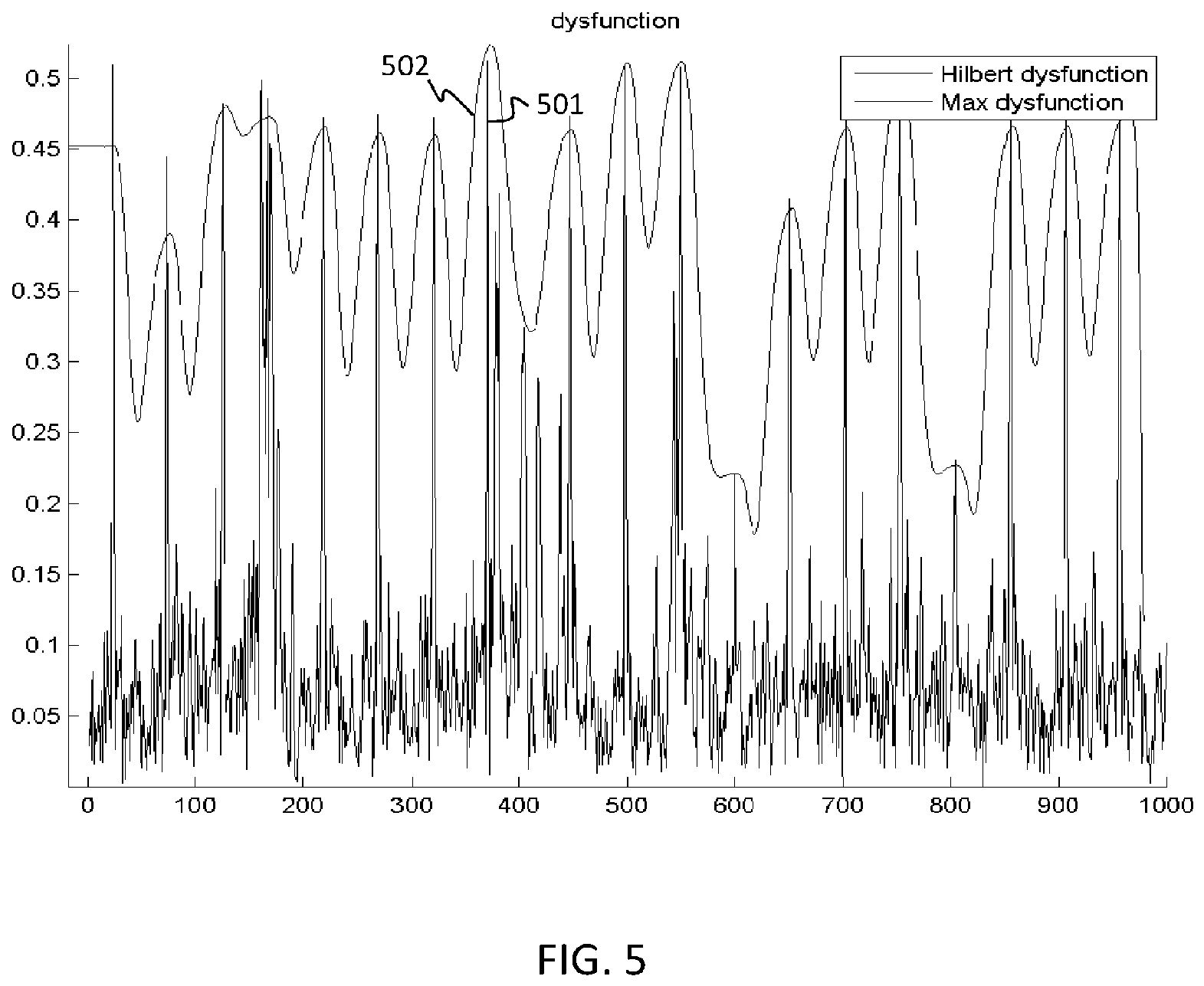 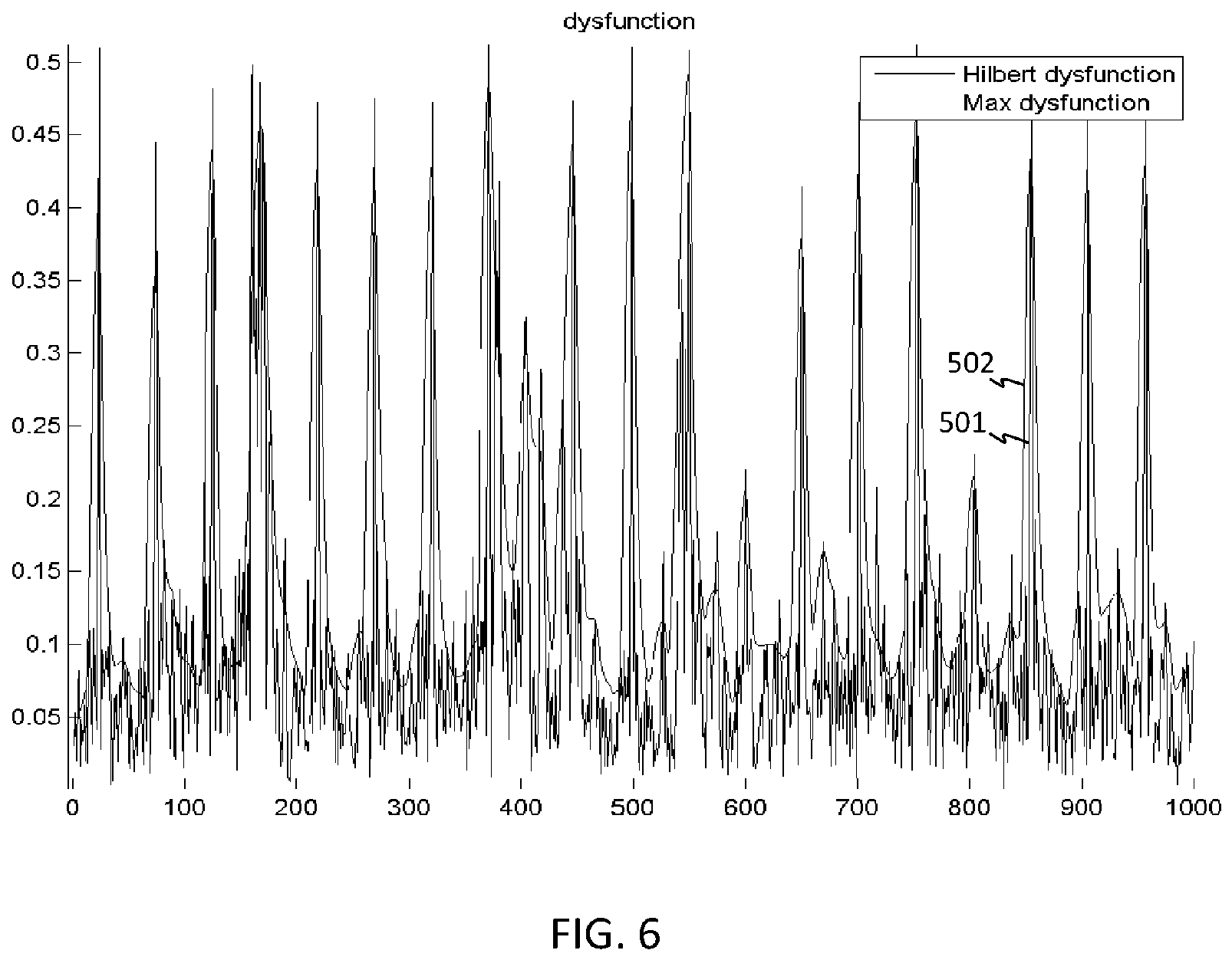 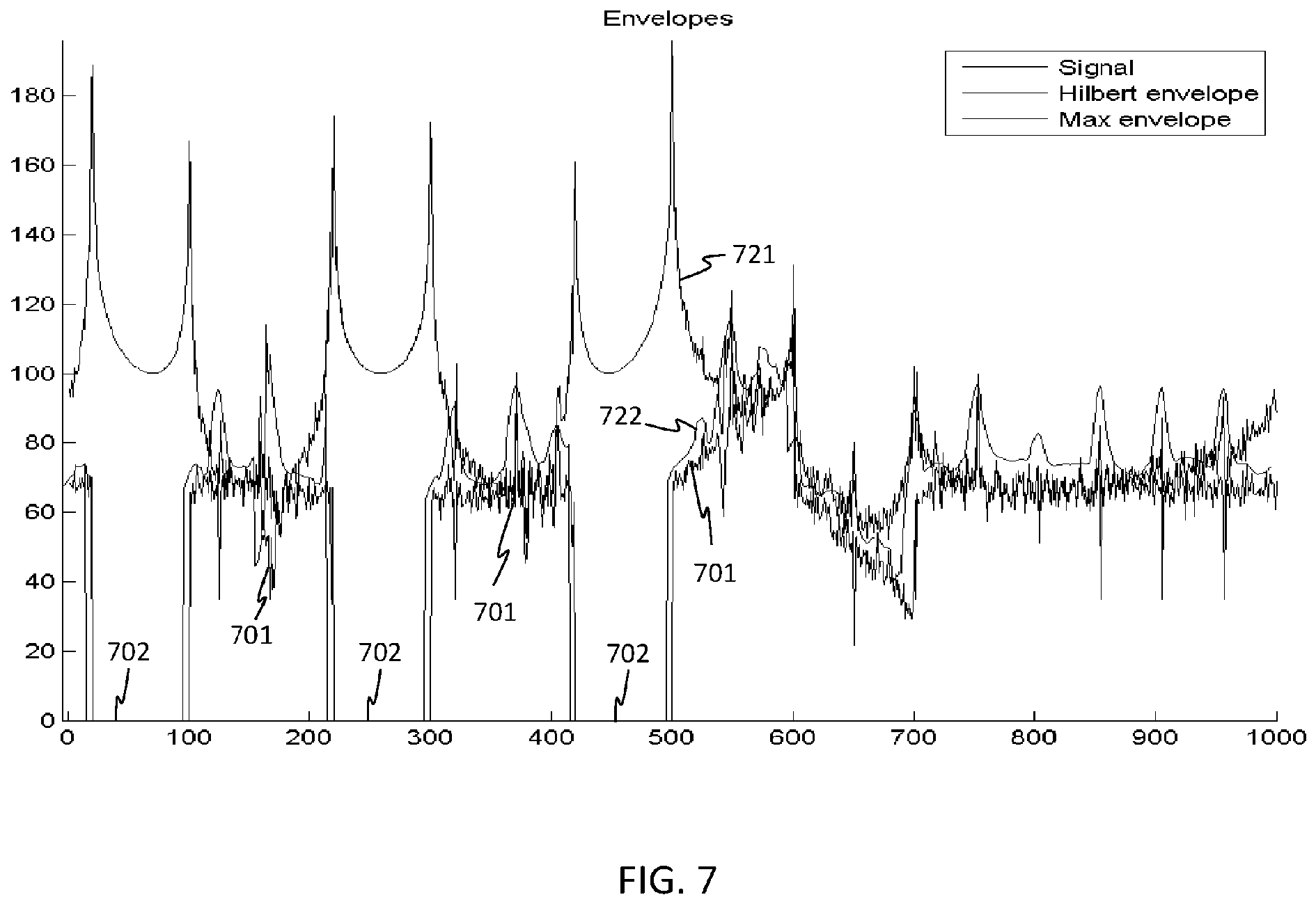 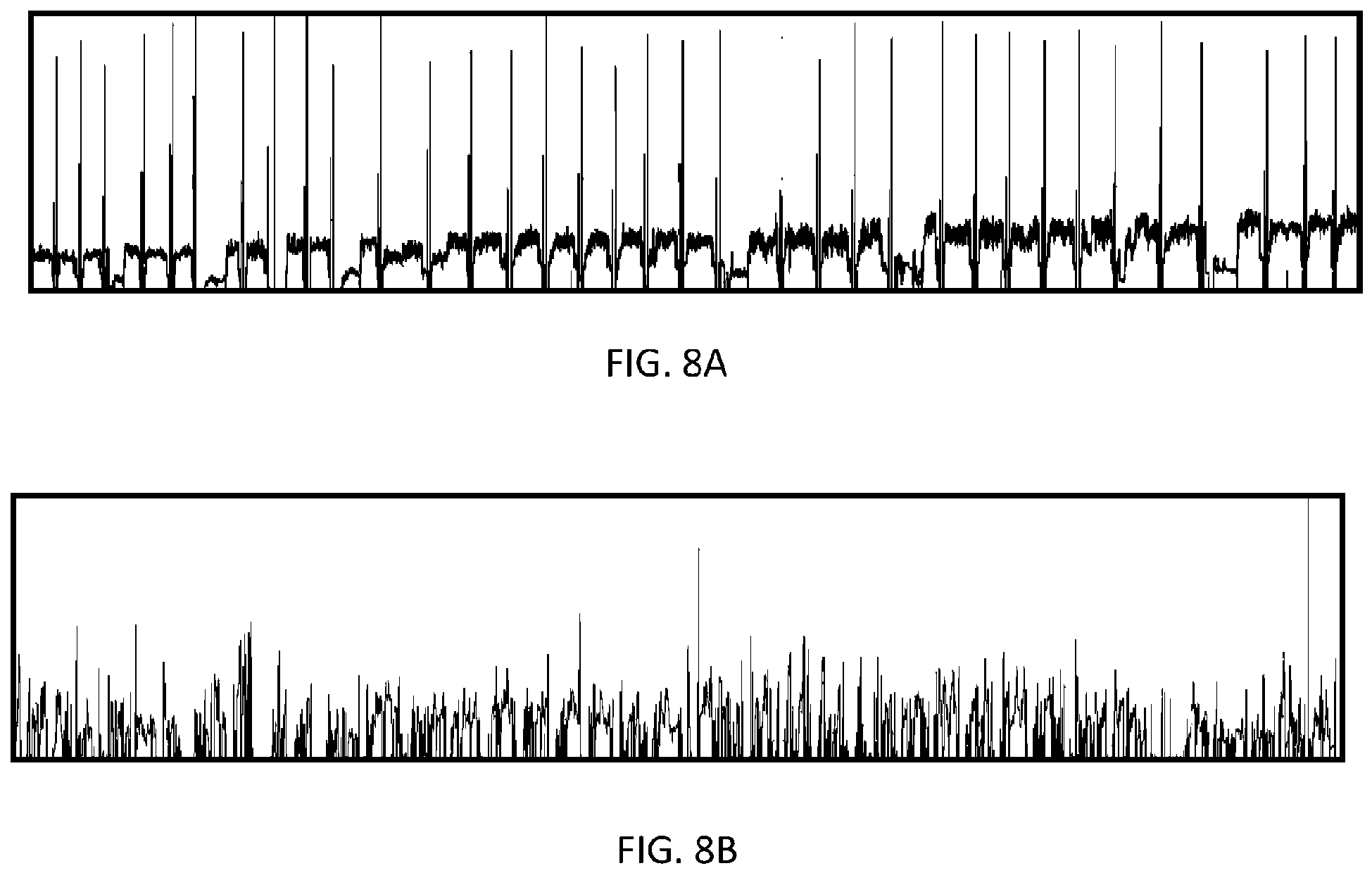 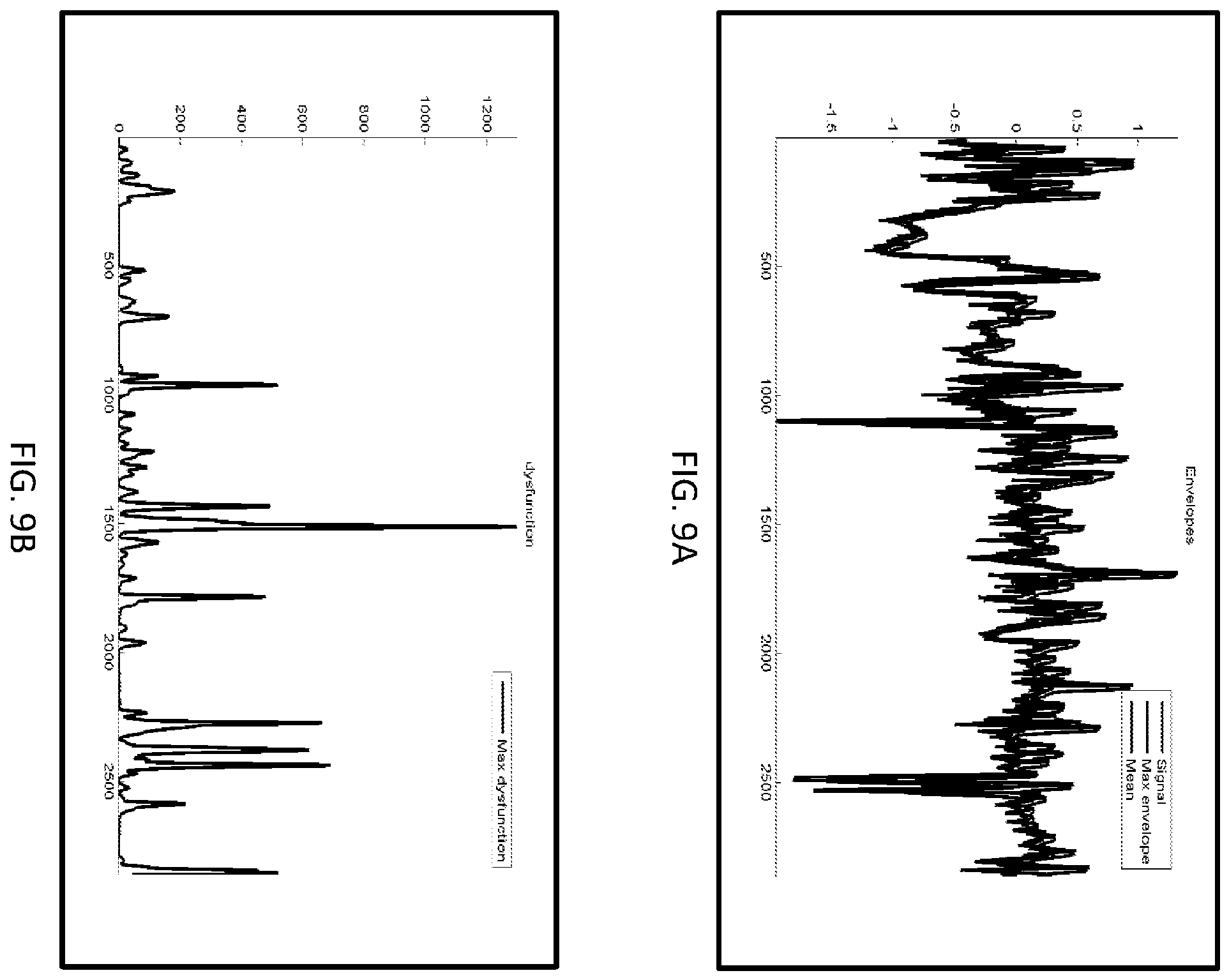 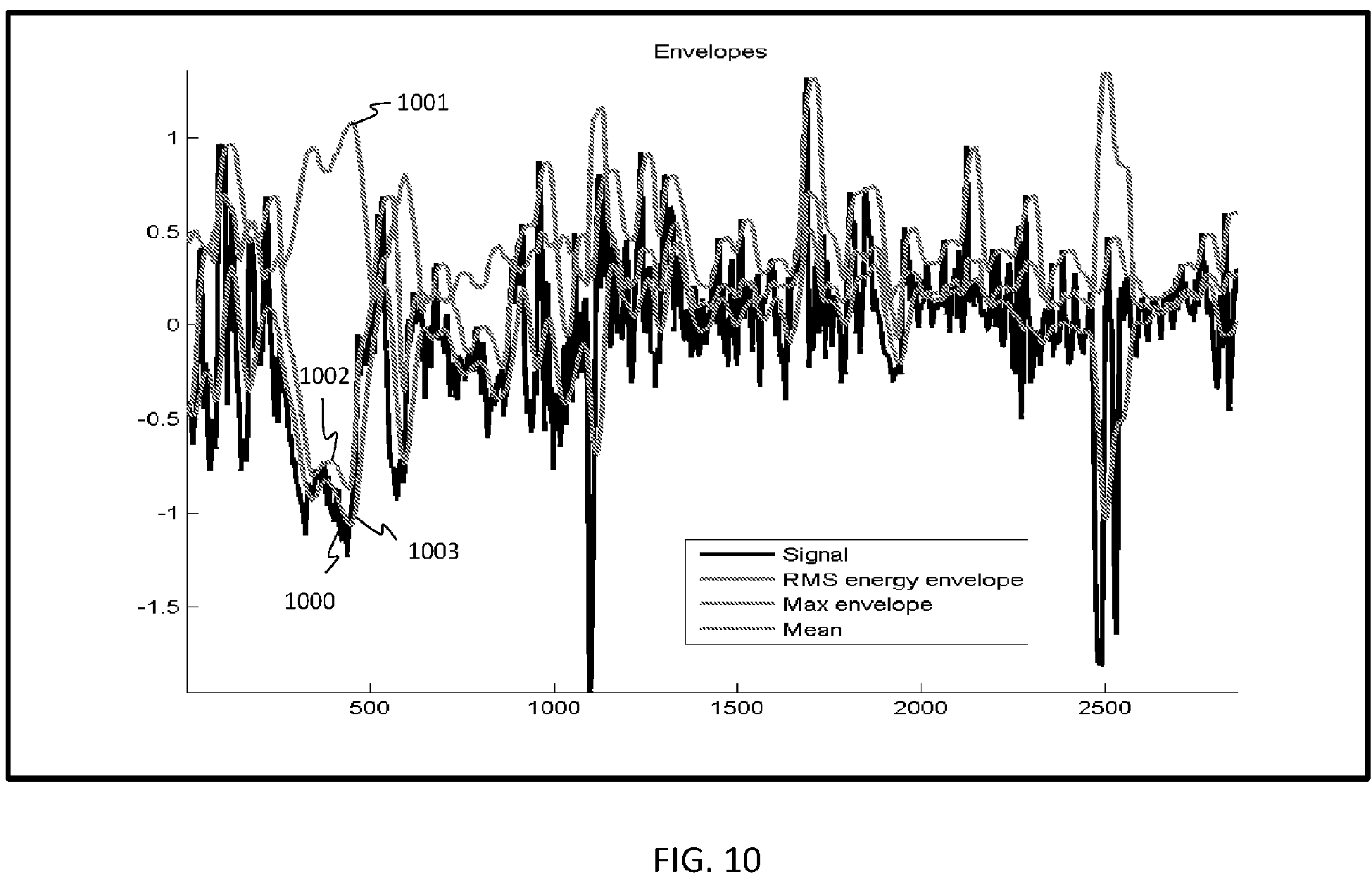 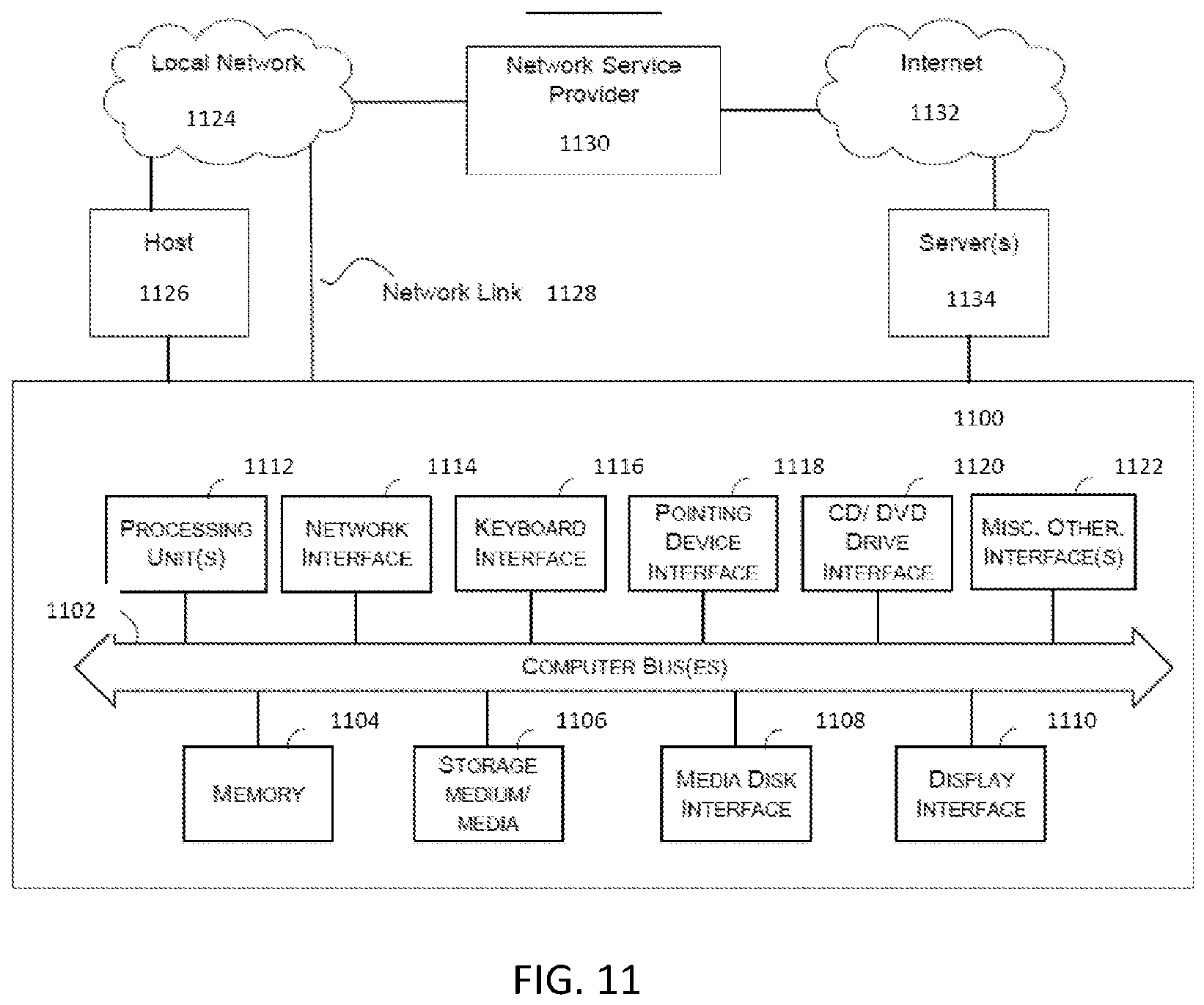