[0002] Reference is briefly made to figure 7 which illustrates the general layout of a 3-point safety belt system 400. Also shown in figure 7 is a vehicle seat 402 with an occupant 404 seated thereon. The multi-point safety belt system 400 includes a seat belt retractor 410 having a spool, not shown in figure 7, about which a length of seat belt 411 is wound. The seat belt is wound about the spool of the retractor and leaving the retractor passage through a web guide 415. The seat belt is not shown wound about the spool in figure 1 but is in figure 6. The seat belt extends from the retractor to an anchor also known as a D-ring or web guide 412 located at shoulder height. The portion of the seat belt 411 extending across the upper torso of the occupant is referred to as the shoulder belt 414. The shoulder belt is typically slidably received within a tongue 416 and extends across the occupant's lap where it is terminated at another anchor 418. That portion of the seat belt extending across the lap is historically referred to as a lap belt 420. The tongue 416 is received within a seat belt buckle 422 which is supported by another anchor 424. As illustrated, anchor 424 and 418 are shown secured to the vehicle floor 426 however, these anchors can be secured to a portion of the vehicle seat. Similarly the retractor 410 is shown mounted proximate to or on the B-pillar 430 of the vehicle and, as known in the art the retractor can also be seat mounted. As known in the art another type of retractor is an ALR retractor with ALR standing for "always locking retractor." This type of retractor has a spool and a lock mechanism which enters into a locked mode of operation after the seat belt has been pulled from the belt. The present invention is applicable to this type of retractor as well. The ALR retractor is often used as part of a 2-point seat belt system.
Document US 4206887 discloses a safety belt with roller arrangement, wherein the winding mechanism of the roller can take a first form, comprising a volume enveloped by the strap of the safety belt, and a secondo form comprising a smaller volume enveloped by the strap. Document US 4256273 discloses a safety belt retractor having a spindle provided with an outer layer formed of a material which is capable of absorbing energy by substantially inelastic deformation. When the safety belt is subject to shock - loading exceeding a predetermined level, this outer layer is crushed, leading to a reduction in the effective diameter of the spindle and thereby allowing an additional length of the belt to be paid out after the spindle has been loaded

Figure 1 is an exploded view of the seat belt retractor incorporating the present invention.

Figure 1a shows further details of a locking mechanism of the retractor.

Figure 2 is another exploded view showing a seat belt retractor, a portion of the seat belt, a pin and an energy absorbing insert.

Figure 2a shows further details of the retractor.

Figure 3 is a cross-sectional view showing only a section of the spool with an energy absorbing collapsible member mounted thereon.

Figure 4 is another cross-sectional view showing a seat belt retractor incorporating the present invention mounted within a retractor frame.

Figure 5 is an isolated view showing a spool, collapsible member and a portion of a seat belt extending from the spool.

Figure 6 shows the seat belt (also referred to as seat belt webbing) wound about the collapsible member and the spool in state after it has protected an occupant in a crash.

Figure 8 shows a sheet of steel capable of being formed into a collapsible member.

Figure 8a shows a composite structure formed as a sheet also capable of being formed into a collapsible member.

Figure 9 shows the sheet of steel formed into a plurality of oscillations.

b) a seat belt (411) characterized as having a known elongation rate under stress,

c) a collapsible member (40) wrapped about a center or body portion of the spool (32) of the retractor (20), the member (40) having an initial diameter d1 when unstressed and collapsible to a lesser diameter of d2 under stress;

the method comprising the steps of:

i. sensing an accident and locking the spool (32) from rotating;

ii. permitting the occupant (404) to move forward and load the seatbelt;

iii. permitting the seat belt (411) to elongate and in doing so dissipating the energy acting on the occupant (404) during the crash;

iv. transferring the occupant's crash force on the seat belt (411) to a compressive force to tend to collapse the member (40);

v. generating a retarding force on the occupant (404) in proportion to the degree by which the collapsible member (40) collapses.
characterized in comprising the step of 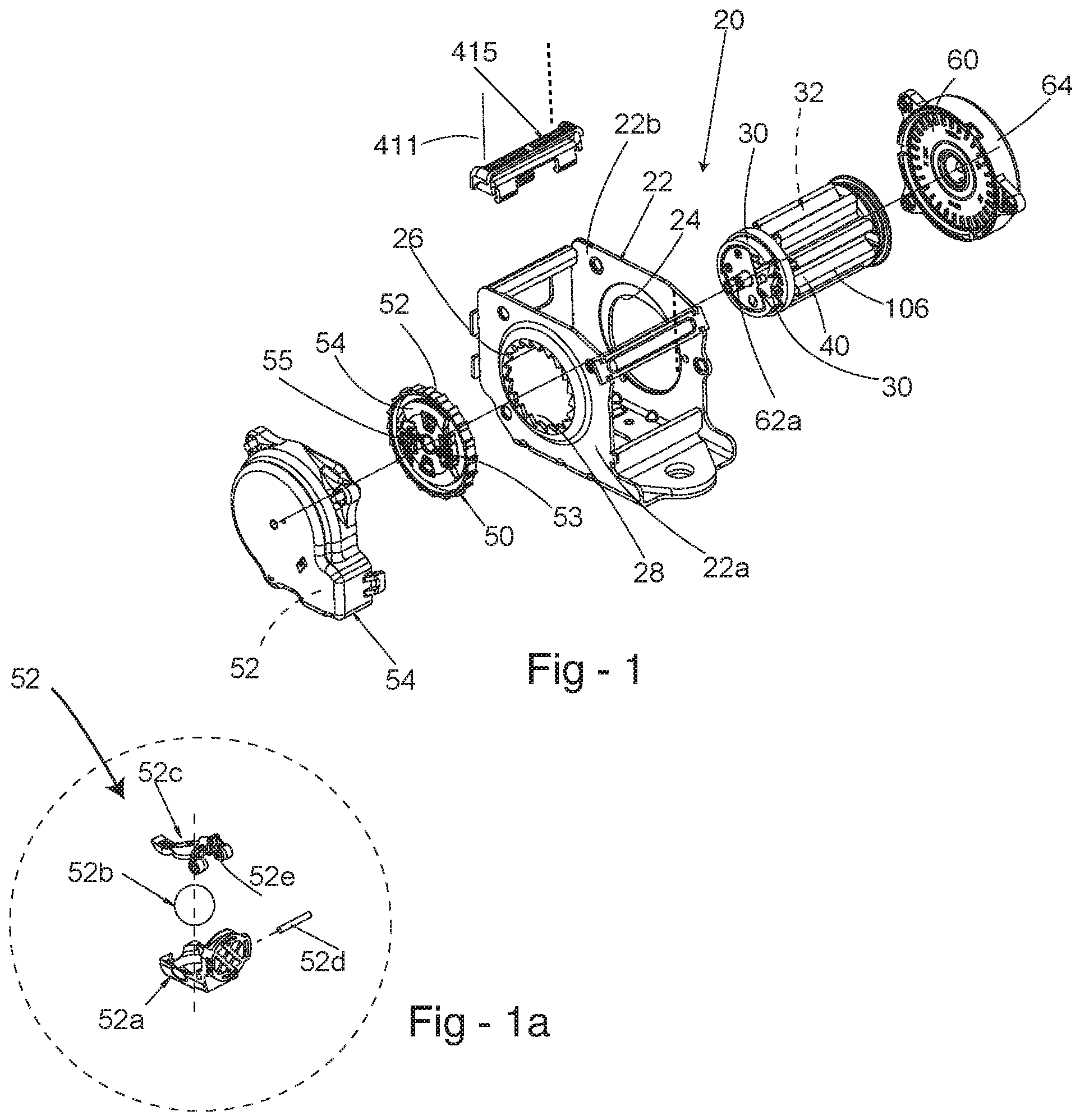 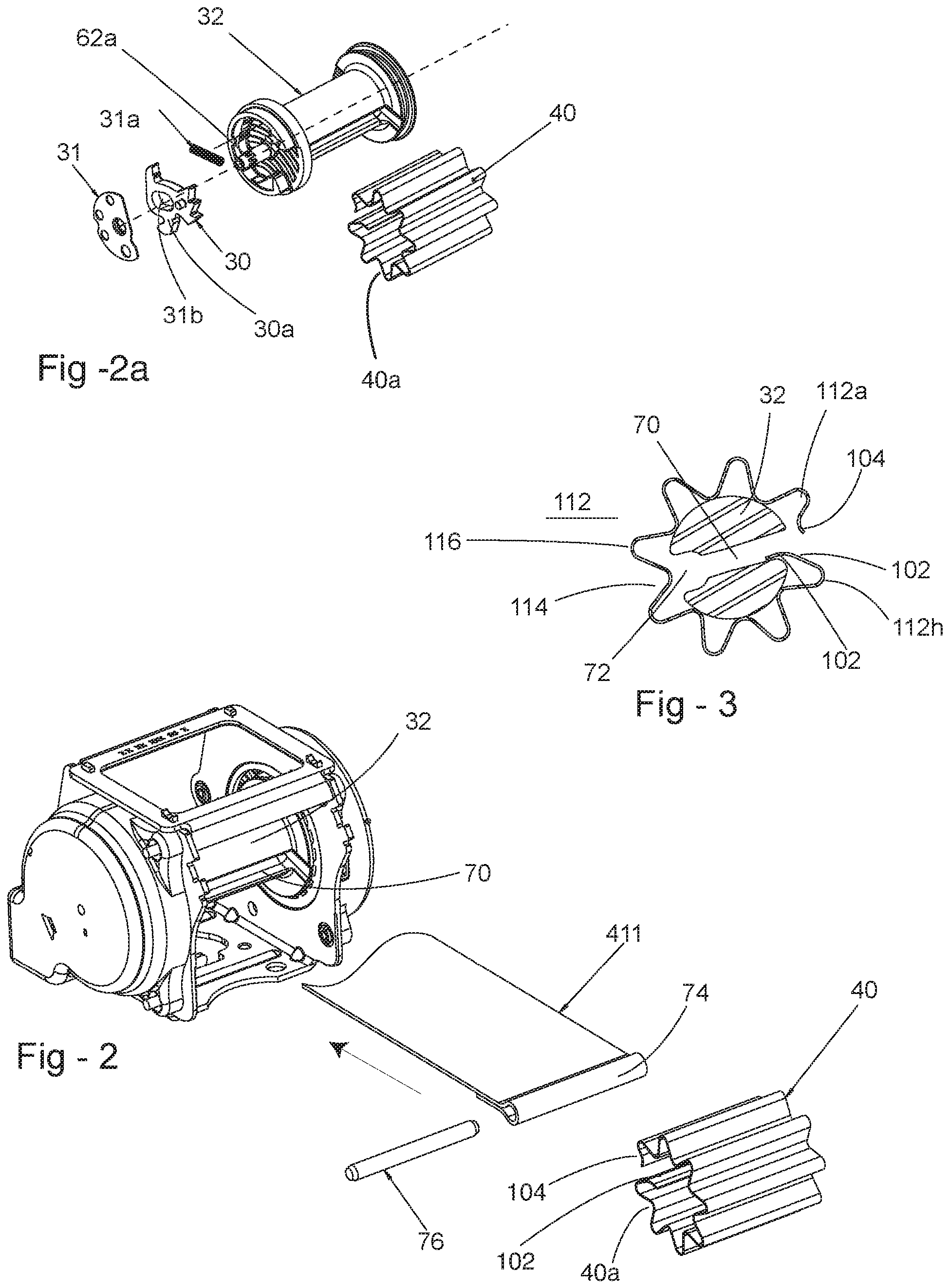 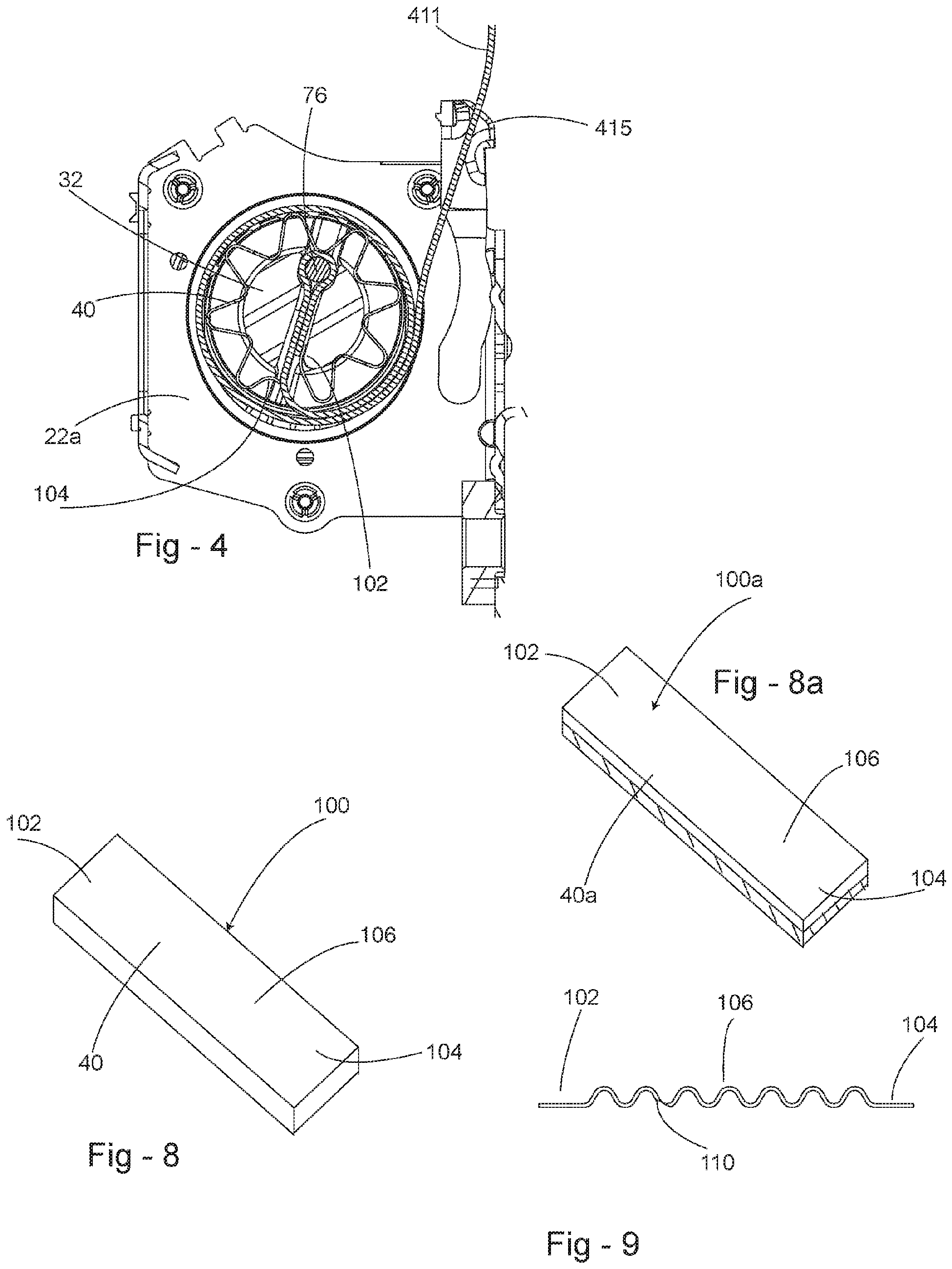 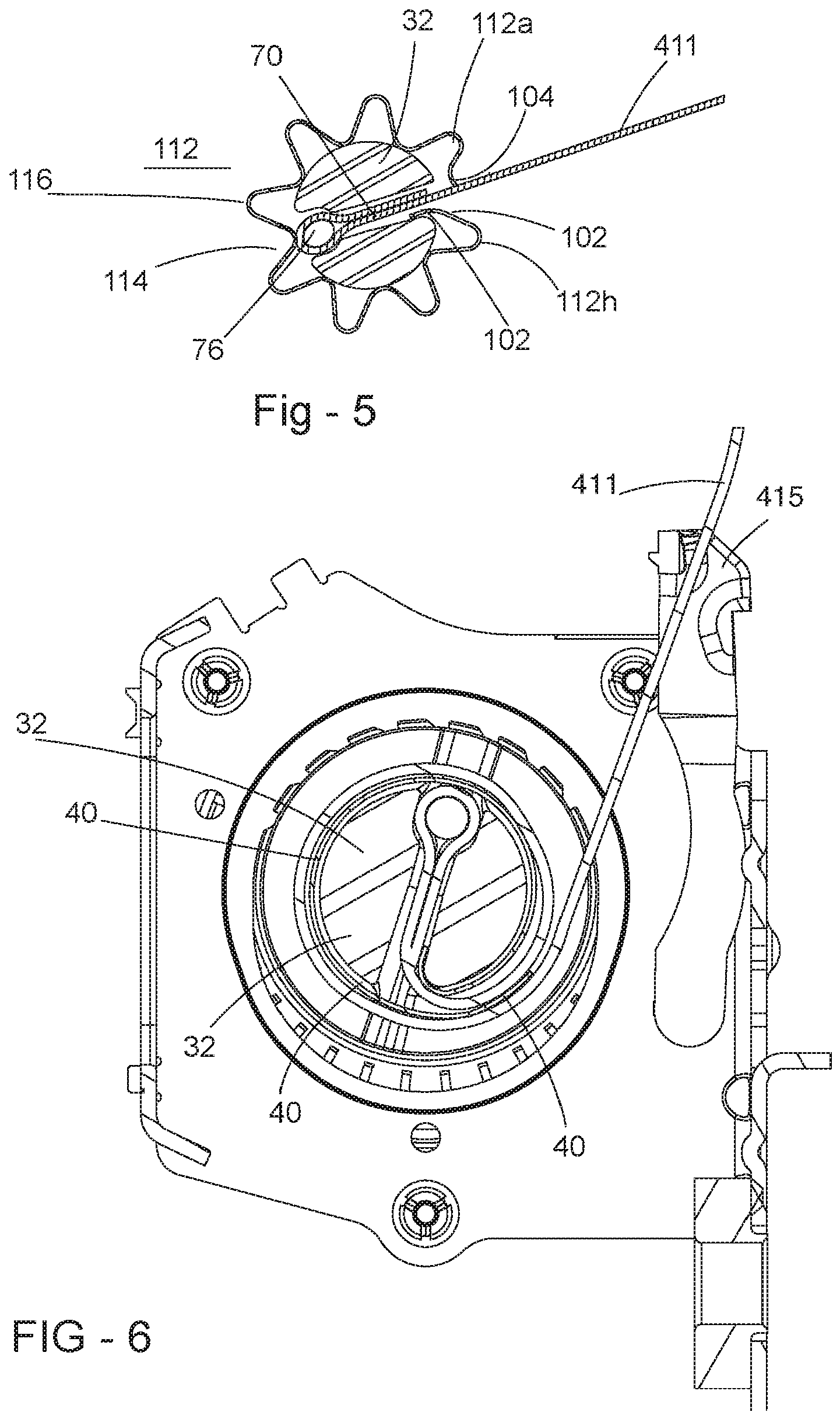 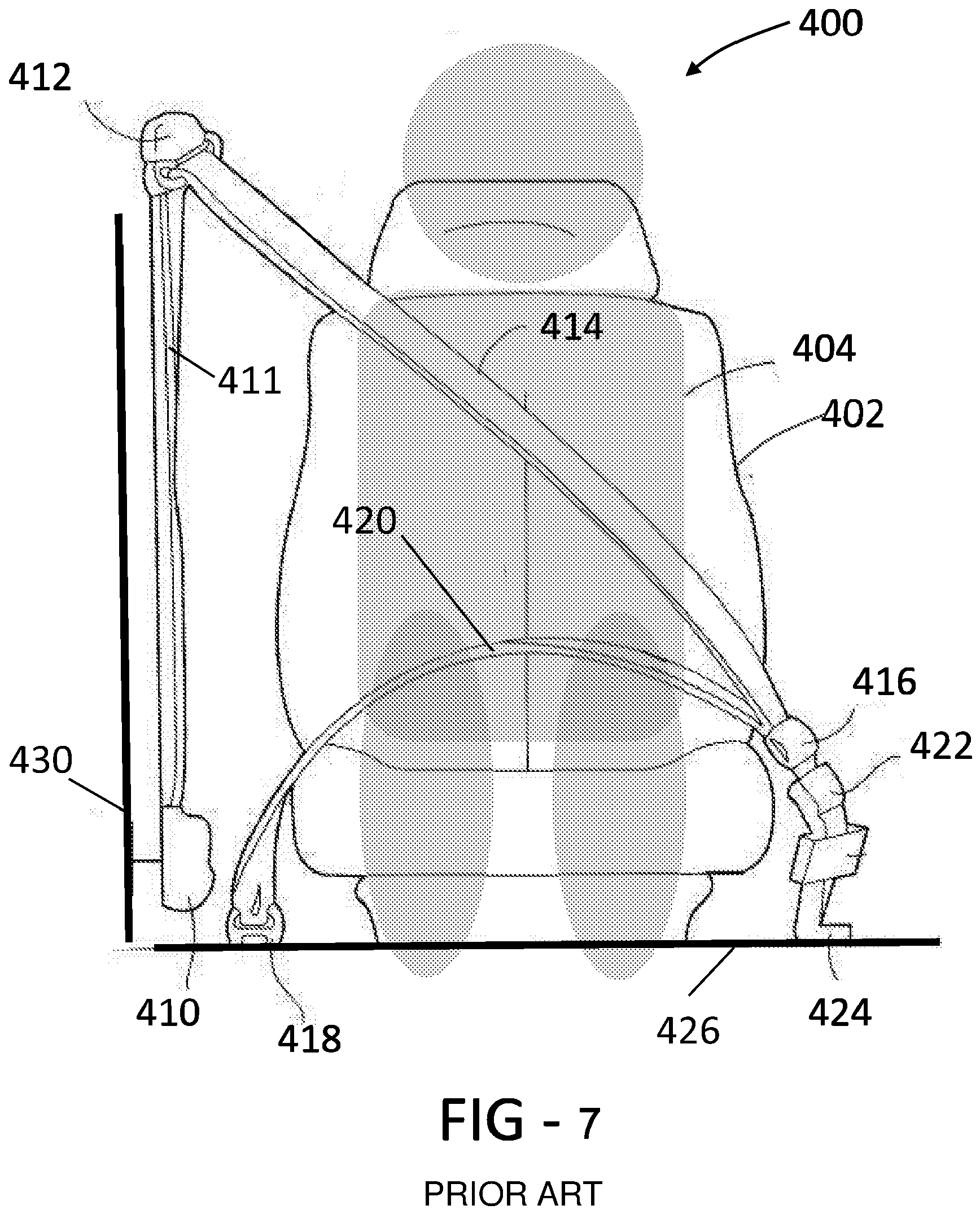