[0002] Most engines used for automobiles and the like include a number of belt driven accessory systems which are necessary for the proper operation of the vehicle. The accessory systems may include an alternator, air conditioner compressor and a power steering pump.
[0003] The accessory systems are generally mounted on a front surface of the engine. Each accessory has a pulley mounted on a shaft for receiving power from some form of belt drive. In early systems, each accessory was driven by a separate belt that ran between the accessory and the crankshaft. Due to improvements in belt technology, single serpentine belts are now generally used in most applications. A single serpentine belt routed among the various accessory components drives the accessories. The engine crankshaft drives the serpentine belt.
[0004] Since the serpentine belt must be routed to all accessories, it has generally become longer than its predecessors. To operate properly, the belt is installed with a pre-determined tension. As it operates, it stretches slightly over its length. This results in a decrease in belt tension, which may cause the belt to slip. Consequently, a belt tensioner is used to maintain the proper belt tension as the belt stretches during use.
[0005] As a belt tensioner operates, the running belt may excite oscillations in the tensioner spring. These oscillations are undesirable, as they cause premature wear of the belt and tensioner. Therefore, a damping mechanism is added to the tensioner to damp operational oscillations.
[0006] Various damping mechanisms have been developed. They include viscous fluid dampers, mechanisms based on frictional surfaces sliding or interaction with each other, and dampers using a series of interacting springs. For the most part these damping mechanisms operate in a single direction by resisting a movement of a belt in one direction. This generally resulted in undamped vibrations existing in a belt during operation as the tensioner arm oscillated between loaded and unloaded positions.
[0007] Representative of the art is US patent no. 6,609,988 which discloses an asymmetric damping tensioner system for belt drives on an engine. A belt is connected between a driver pulley on a crankshaft and any number of driven pulleys. Each driven pulley is connected to an accessory such as an alternator, power steering pump, compressor or the like. The tensioner is placed anywhere before the first component of significant effective inertia, in the belt movement direction. A biasing member in the tensioner is used to maintain a tension in the belt. The tensioner further comprises a damping mechanism to damp belt vibrations caused by the operation of the engine. Tensioner damping friction is unequal or asymmetric, depending upon the direction of movement of the tensioner arm. During acceleration the damping friction of the tensioner in the unloading direction is significantly lower than the damping friction in the opposite, or loading direction, as is the case during deceleration. Lower damping friction during acceleration allows the tensioner arm to quickly adjust to the increase in belt length caused by acceleration. Higher damping friction during deceleration prevents the tensioner arm from being moved too far in the loading direction thereby causing slipping and noise. Asymmetric damping also significantly diminishes overall vibration in the belt during all phases of operation.
[0008] US 2008/0274846 A1 discloses a tensioner according to the preamble of claim 1, more precisely an autotensioner comprising a torsion coil spring interposed between a base and a rocking arm, and a tubular bushing provided between an inside surface of the base and an outside surface of the rocking arm. The torsion coil spring pushes and biases the rocking arm toward the bushing, and brings the pushing direction substantially in coincidence with the axial load direction of the force, acting on a stepped bolt supporting the rocking arm, from a belt. When the belt tension becomes high, the arm axial center displaces slightly from the base axial center, an extremely large first damping force acts on the rocking arm. When the belt tension becomes low, the smaller second damping force acts on the rocking arm.
[0009] What is needed is a tensioner having a first damping member engaging a pivot arm and a second damping member engaging a base. The present invention meets this need.

[0013] The accompanying drawings, which are incorporated in and form a part of the specification, illustrate preferred embodiments of the present invention, and together with a description, serve to explain the principles of the invention.

Figure 1 is a front perspective view of the tensioner.

Figure 2 is a rear perspective view of the tensioner.

Figure 3 is a rear plan view of the tensioner.

Figure 4 is a front exploded view of the tensioner.

Figure 5 is a rear exploded view of the tensioner.

Figure 6 is a chart of damping torque and spring force.

Figure 7 is a chart of damping torque versus arm angle.

Figure 8 is a detail of the spring cover.

Figure 9 is a plan view of the base.

Figure 11 is a plan view of the first damping member.

a pivot arm (11) pivotally engaged with the base;

a pulley (12) journalled to the pivot arm;

a second spring (9) disposed in the pivot arm and urging a second damping member (10) into frictional engagement with a base surface (42), characterised in that:
the base surface comprises an arcuate form having a radius (R1) that is variable from a minimum value to a maximum value.

2. The tensioner as in claim 1, wherein the first spring is a torsion spring.

3. The tensioner as in claim 1, wherein the second spring is a compression spring.

4. The tensioner as in claim 1, wherein the second damping member and the second spring are disposed in the pivot arm.

5. The tensioner as in claim 4, further comprising a cover (8) over the second damping member.

6. The tensioner as in claim 5, wherein the cover further comprises a brush portion (81). 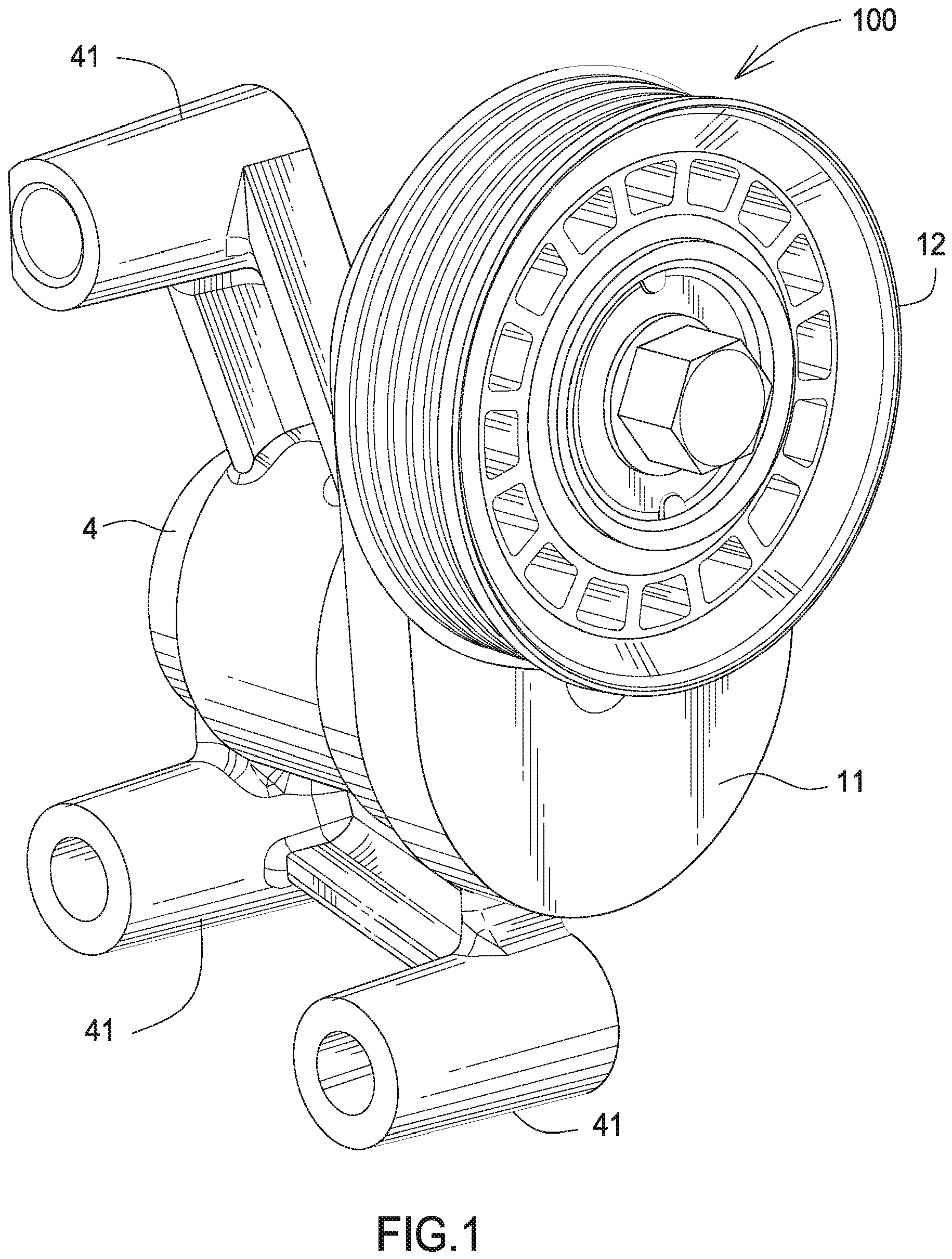 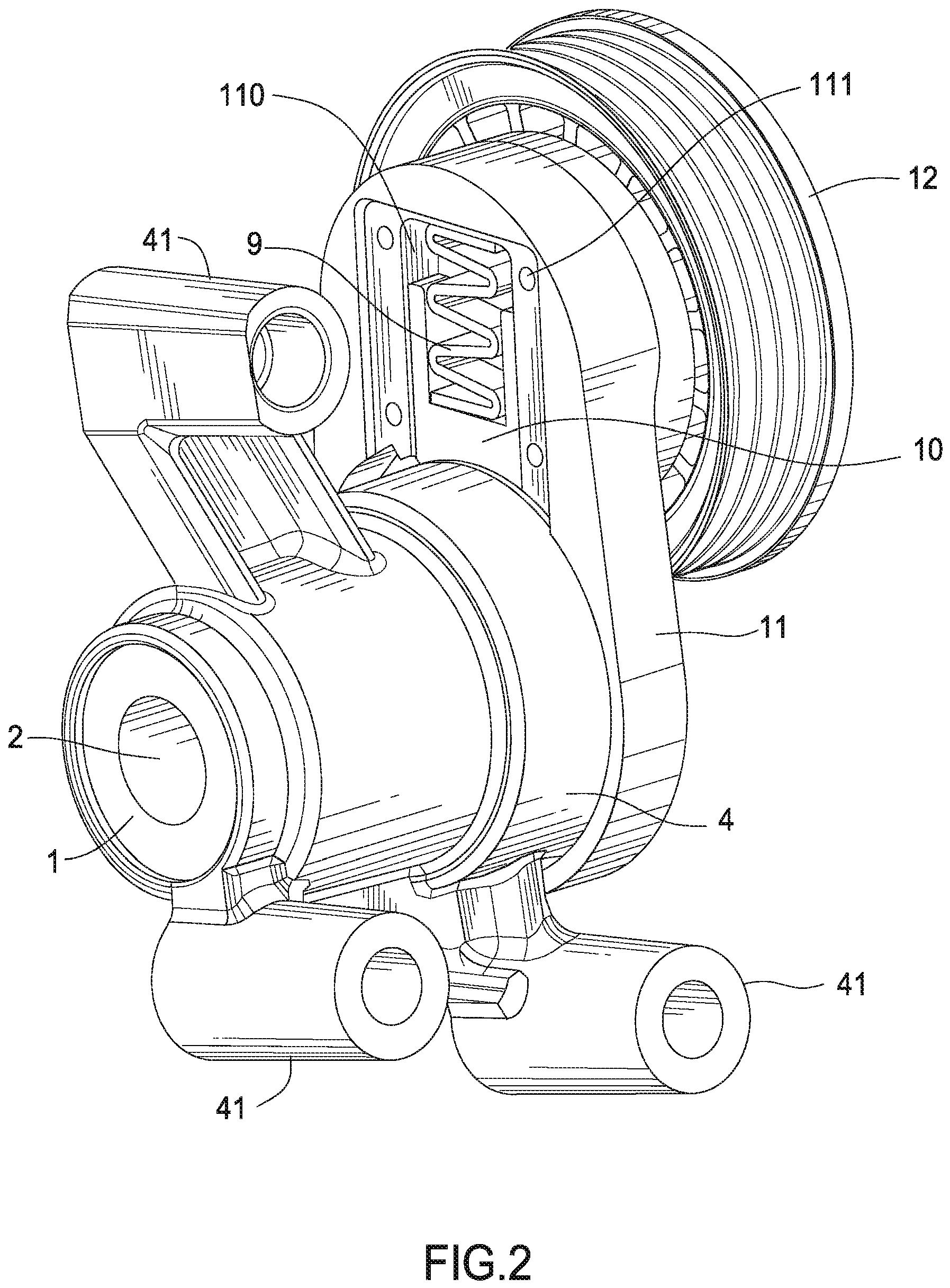 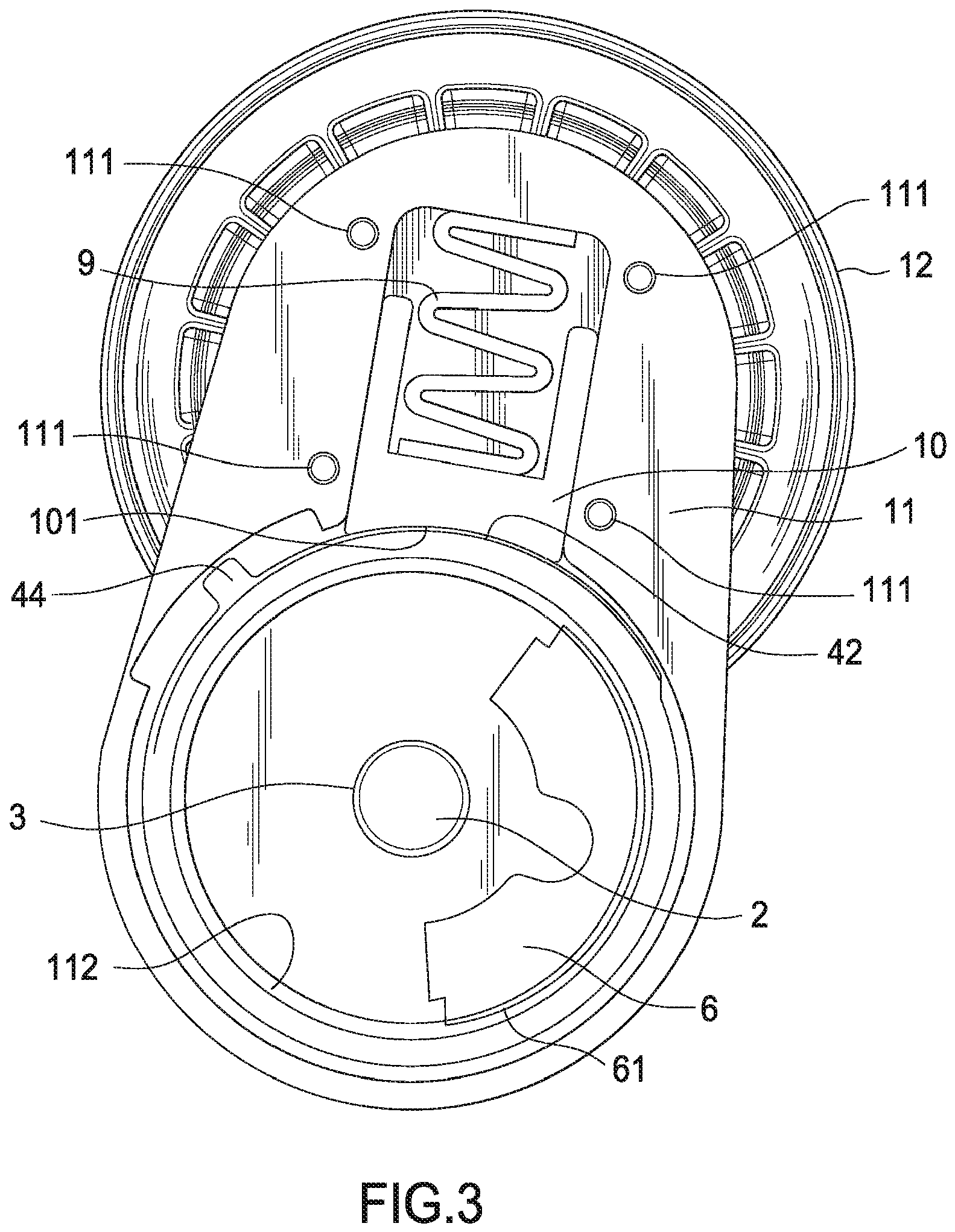 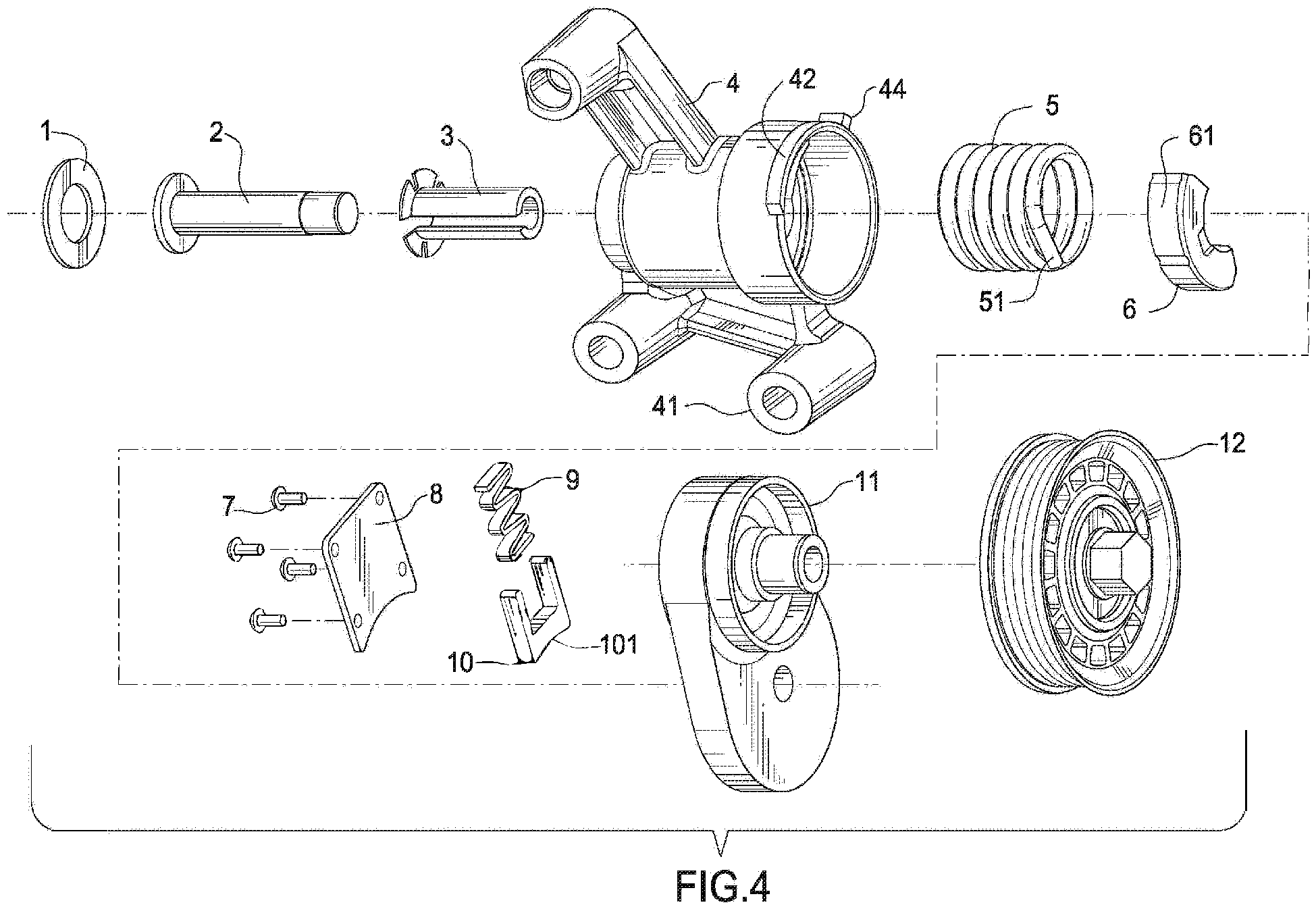 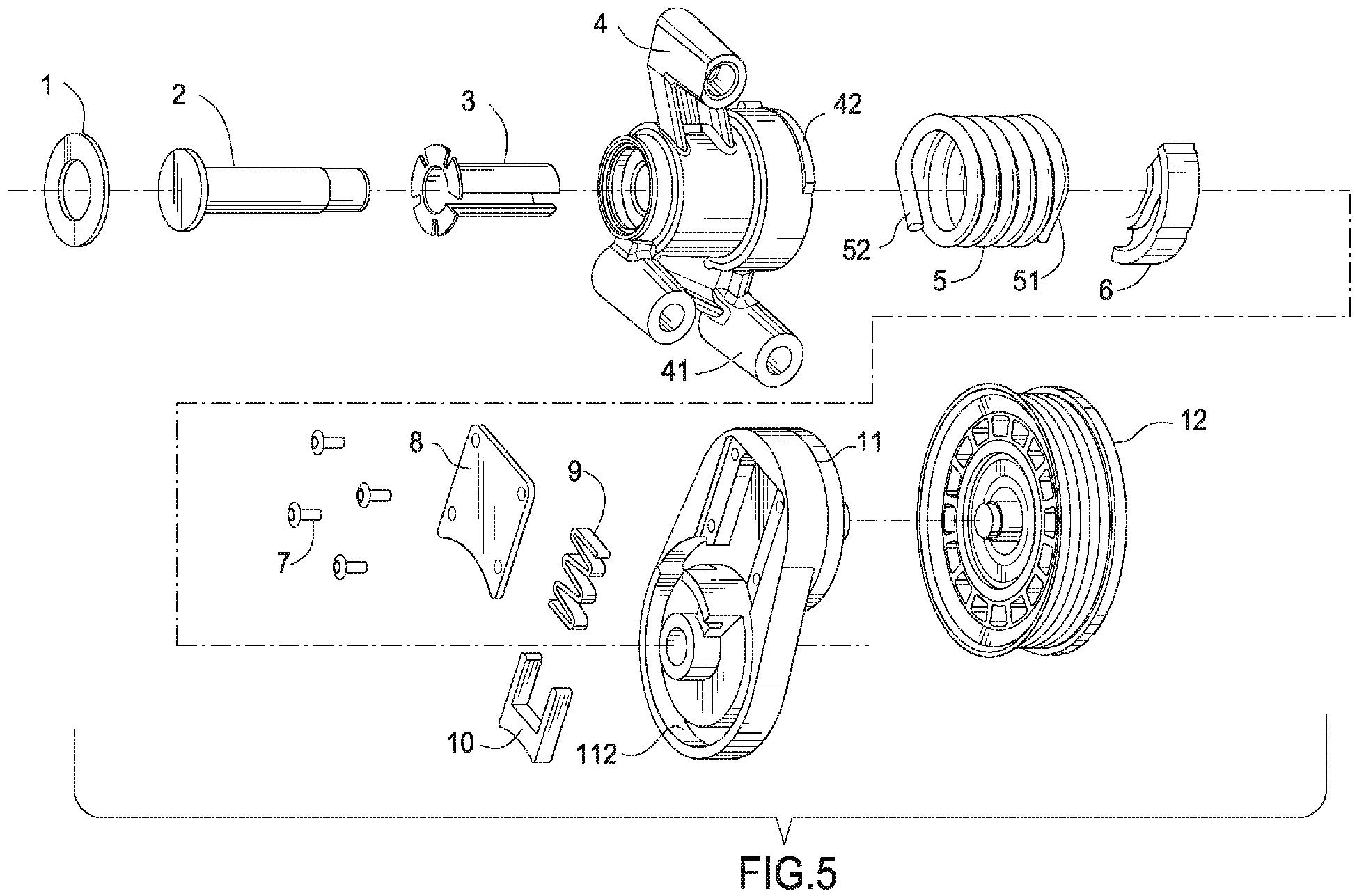 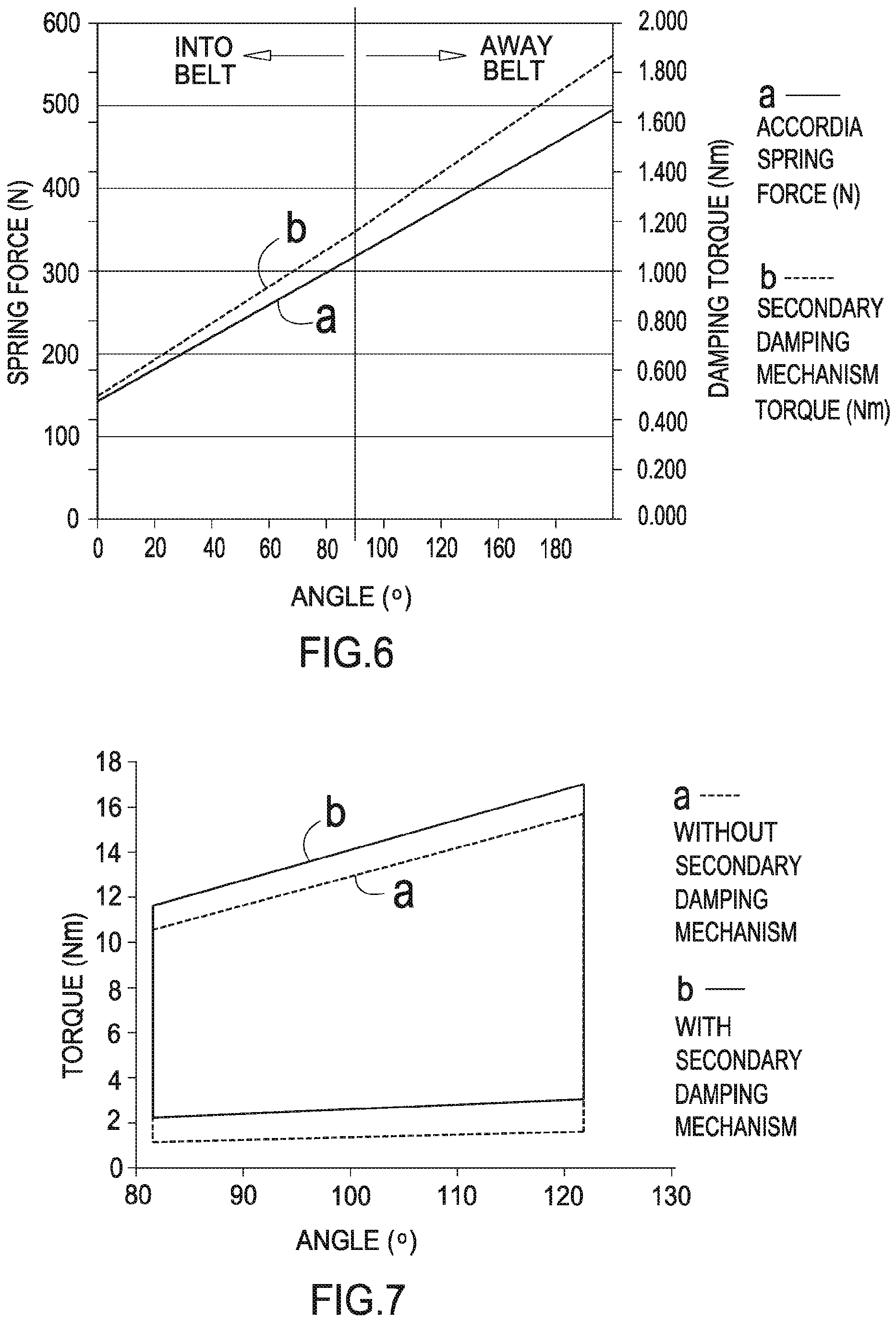 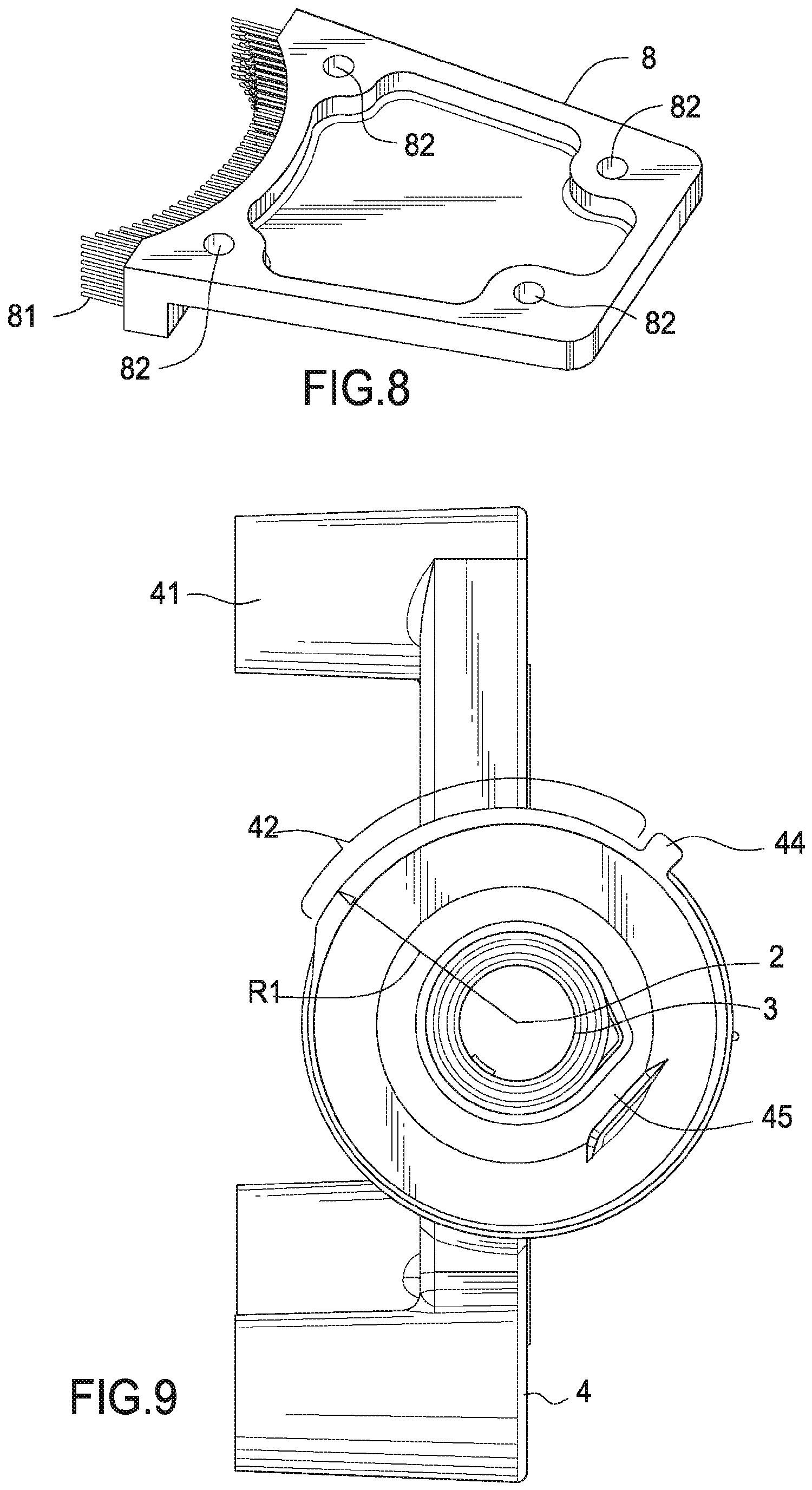 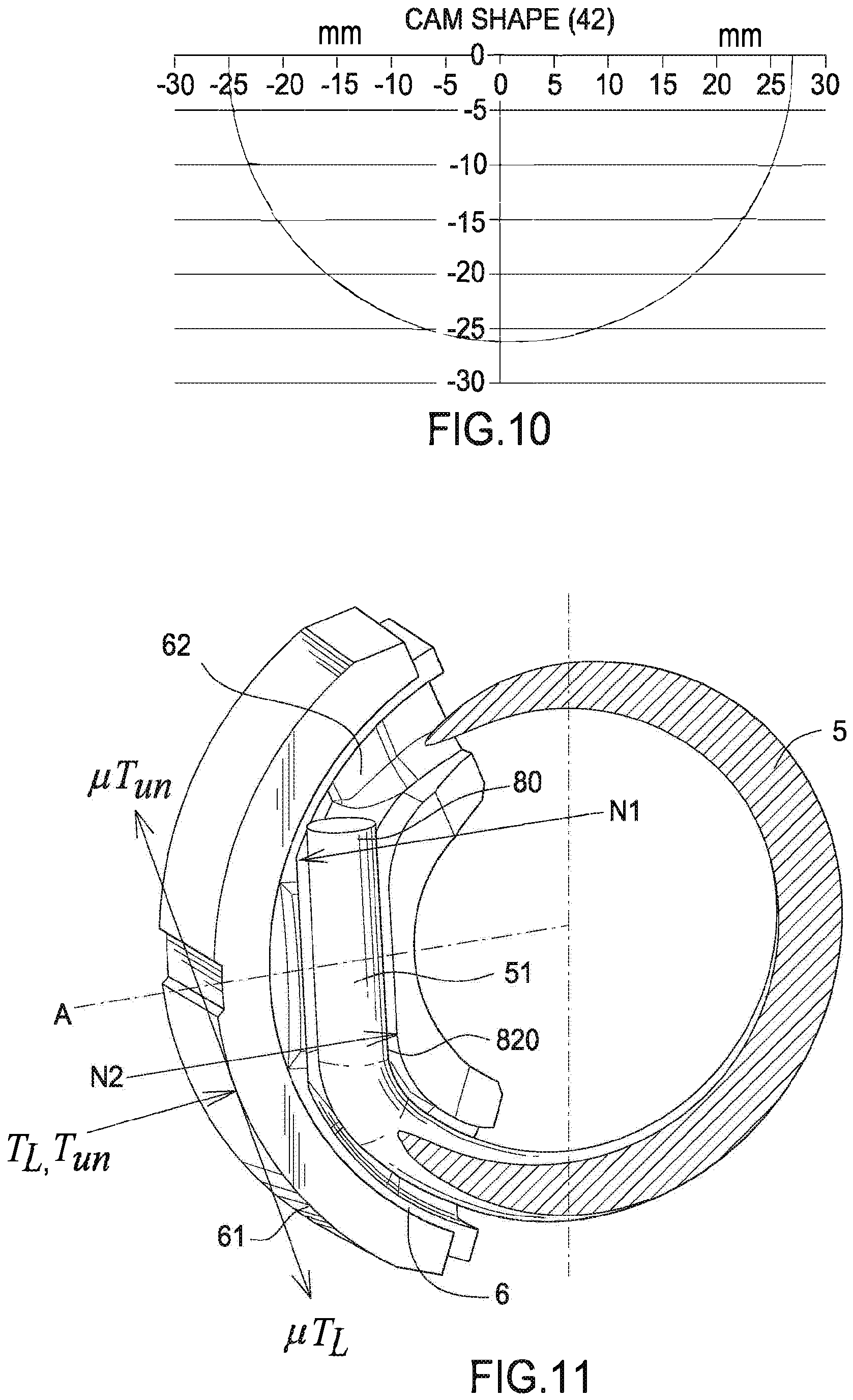