[0002] The mitral valve is one of the four valves of the heart having a complex structure. Various elements in the valve must function in a coordinated manner to cause blood to flow through the valve in an appropriate fashion. The mitral valve consists of two leaflets (anterior and posterior) that are attached to a fibrous ring (i.e., the annulus). The leaflets are anchored to papillary muscles in the wall of the left ventricle by a number of chordae tendineae (see, e.g., Figure 1). As shown in Figures 1 and 2, a normal mitral valve annulus 10 has a posterior region and an anterior region situated between two trigones, which are fibrous structures that form part of the base of the heart. Under normal conditions, during the contraction phase of the heart (i.e., systole), the two leaflets come together (i.e., coapt) and close the valve, which inhibits blood flow from the ventricle into the aorta (i.e., regurgitation). The coaptation of the valve leaflets typically occurs at (or near) the level of the fibrous ring, in part due to the chordae tendineae which restrict the leaflets from rising above that level.
[0003] In mitral insufficiency of a degenerative origin, closure of the valve is insufficient because one of the leaflets (or both) moves above the plane of the annulus at least partially into the left atrium, causing what is commonly referred to as prolapse of the leaflets. One cause of prolapse is elongation or rupturing of one or more of the native chordae tendineae. One common technique for prolapse repair consists of use of artificial cords (i.e., "neocords"), often made of polytetrafluoroethylene (PTFE), to replace defective native chordae tendineae. These neocords are connected between the papillary muscles and a free edge of the leaflets and thus perform the function of the native chordae tendineae.
[0004] In mitral insufficiency, the valve annulus is often also dilated. In cases of severe mitral insufficiency, the patient often must undergo intervention to repair the valve or to replace the valve with an artificial valve prosthesis. A valve repair procedure typically has one or more of the following objectives: to restore the mobility of the leaflets without restriction or excess movement, to create an adequate coaptation surface or closure, and to remodel the shape and size of the dilated mitral annulus.

[0005] The invention relates to a prosthetic device for repairing a mitral valve and is defined by the appended claims. According to various embodiments, the present invention provides a device that addresses two significant challenges associated with implanting neocords, namely determining the length required for optimal functionality and attaching the neocords to the native valve leaflets. According to some embodiments, the present invention is an annuloplasty device or an annuloplasty delivery device, which includes a plurality of reference elements, either separate or on a removable strip attached to the device, for the fixation of neocords thereto. The reference elements extend within the lumen of the annuloplasty device or on the delivery device such that they are capable of receiving such neocords. These reference elements serve to establish the proper length of the neocords that are to be attached to mitral valve leaflets. This neocord length sizing criteria is based on the well established clinical concept that the length of the artificial chords is similar to the distance between the tip of the papillary muscle and the annulus plane level.
[0006] Advantageously, the device allows the proper length of the neocords to be established during an operation for the repair of a prolapse of the mitral valve. No pre-measurement of the implanted neocords, or use of a tool to pre-measure, is required. The invention makes it possible to have reliable and reproducible results in determining the length of the neocords. Furthermore, the reference element function to prevent knots used to attach the neocords to the native leaflets from slipping. The reference elements are then removed or cut away, leaving the knots in place.
[0007] While multiple embodiments are disclosed, still other embodiments of the invention will become apparent to those skilled in the art from the following detailed description, which shows and describes illustrative embodiments of the invention. Accordingly, the drawings and detailed description are to be regarded as illustrative in nature and not restrictive.

Figure 1 is a schematic, sectional view of a portion of a heart including a mitral valve;

Figure 2 is a schematic view of a mitral valve with two leaflets;

Figure 3 is a plan view of a prosthetic device according to an embodiment of the invention;

Figure 4 is a schematic, cross-sectional view of a portion of a native mitral valve and annulus in which a prosthetic device is located according to an embodiment of the invention;

Figure 5 is a close-up view of portion A of Figure 3;

Figure 6 is a close-up view of a reference element being cut according to an embodiment of the invention;

Figure 7 is a plan view of a prosthetic device according to an example;

Figure 8 is a close-up view of portion B of Figure 7;

Figures 9A-9C are three schematic views showing steps in the application of a prosthetic device according to an example;

Figures 10A-10D are schematic views showing steps in the application of a prosthetic device according to another example;

Figure 11 is an exploded, perspective view of an annuloplasty ring in combination with a holder according to an embodiment of the invention;

Figure 12 is a bottom view of an assembled annuloplasty device and holder according to an example; and

Figure 13A is a bottom view and Figure 13B is a top view of an assembled annuloplasty device and holder including suture loops according to an embodiment of the invention.

2. The prosthetic device (50) of claim 1 wherein the elongate band (52) is made of a flexible material.

3. The prosthetic device (50) of claim 1 wherein the elongate band (52) is arcuate in shape and has two free ends that are separated by an opening.

5. The prosthetic device (50) of claim 1 wherein the elongate band (52) comprises a central core of a silicone material and an exterior covering of a polyester material. 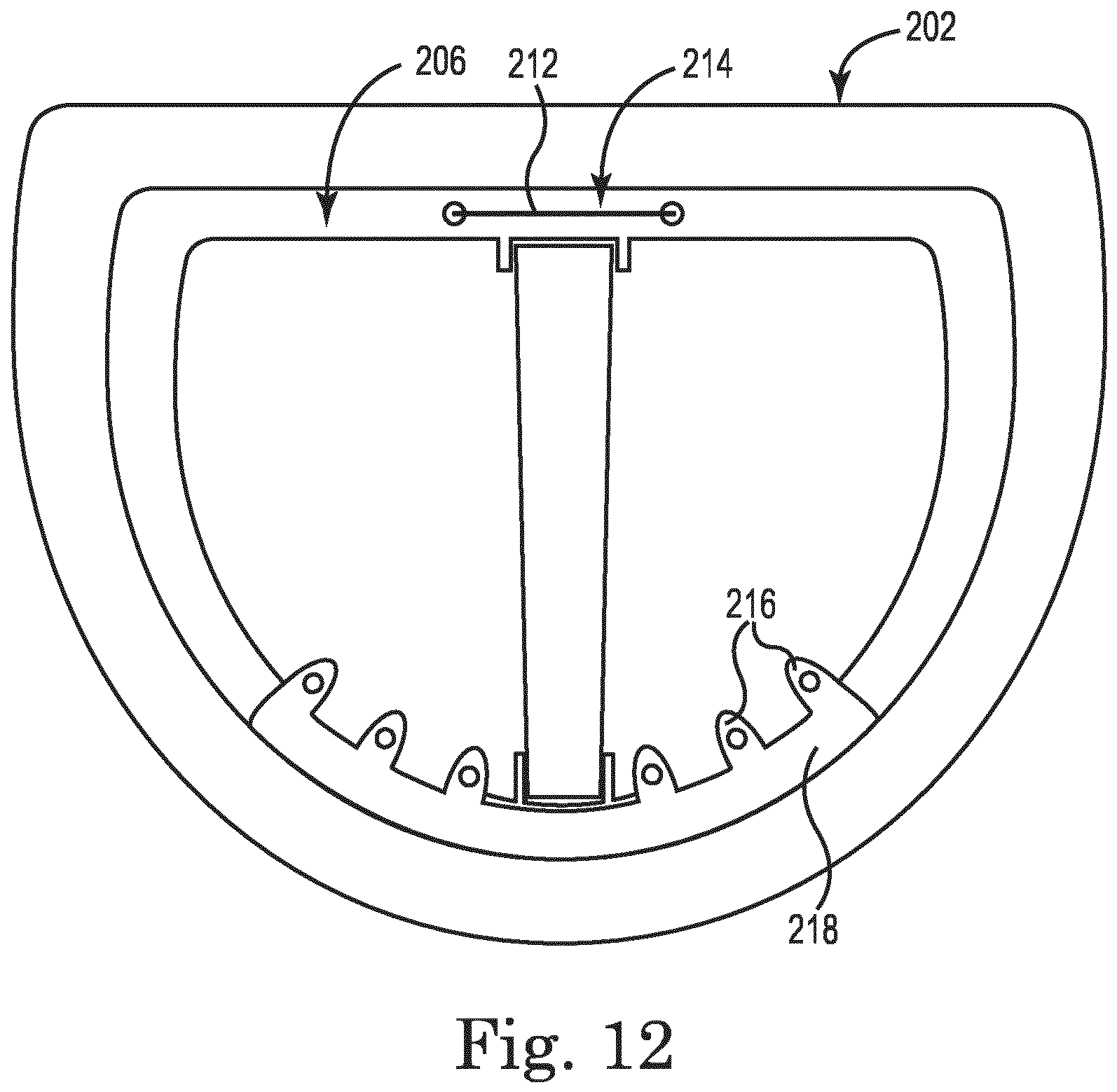 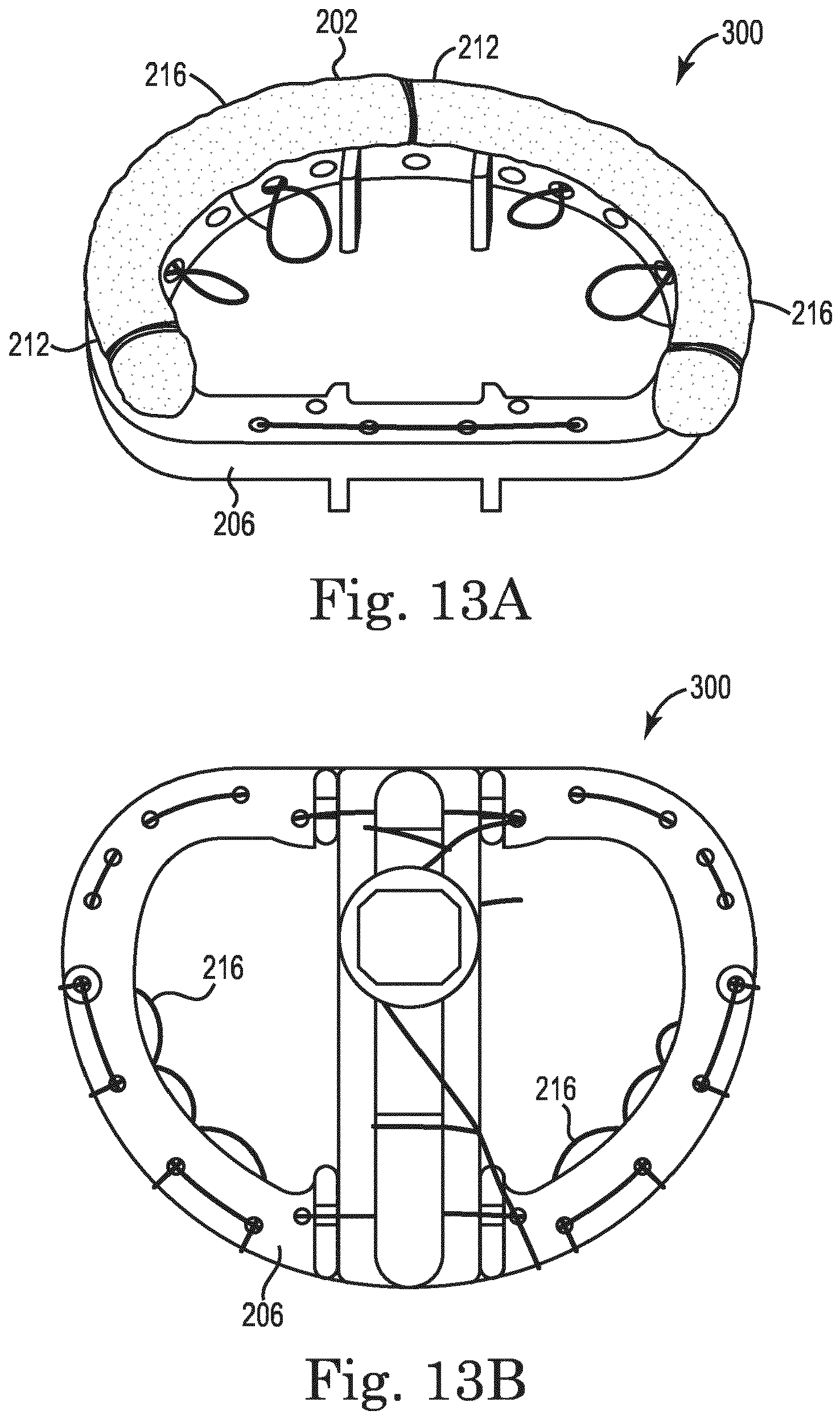