Branch of Science Associated with the Invention

Background of related art or science

[0002] The processes of steelmaking mainly used in the steel industry are;
[0003] Both processes and others generate great amount of heat and dust so dedusting system is necessary. In most of the cases, dedusting system comprises of primary suction for taking off-gas directly from the furnace and secondary suction for taking dust and fume circulating in the building and for preventing dust escaping from the building to the open atmosphere.
[0004] US.3,443,931 teaches a method of metallizing compacts of iron oxide containing a carbonaceous material. The compacts are formed, dried, and preindurated up to a temperature between 1600 and 1800 °F (°C) The pellets are them rapidly heated by exposure to a radiant heat source which produces an environment at a temperature between 2300-2600 °F (°C) for a sufficient time so that a liquidus phase is formed within the compacts. After the liquidus phase is formed, the compacts tend to shrink and then are immediately chilled by exposure to a cold environment.
[0005] Kaneko et al. U.S. 4,701,214 teaches a method of producing iron from finely divided iron oxide comprising the steps of: mixing iron oxide or iron fines with finely divided coal and a binder to form a mixture, agglomerating the mixture by compacting, pelletizing, or briquetting the mixture to form agglomerates or pellets, introducing the pellets to a rotary hearth furnace to pre-reduce the iron in the pellets, introducing the pre-reduced pellets into a smelting reduction vessel as the metallic charge constituent, introducing particulate carbonaceous fuel and oxygen to the smelting reduction vessel through the bottom of the vessel to react with the melt or bath within the vessel, reduce the iron to elemental iron and form an off gas containing CO and H2, introducing the off -gas into the rotary hearth furnace as process gas to pre-reduce the pellets therein, and drawing off the hot metal from the smelting reduction vessel.
[0006] The pre-reduced compacts are preferably discharged from the rotary hearth furnace at a temperature of at least 1000 °C into the smelting reduction vessel to form the molten iron product.
[0007] WO1997026375A1 revealed an apparatus for preheating self-reducing pellets for direct use in iron making or steelmaking in which a preheat chamber contains the pellet and is externally heated using waste exhaust gas and secondarily heated directly by using an internal preheat burner. The preheat chamber gases are vented into external heating chamber where any CO present is post-combusted to produce CO2 with energy from the post-combustion used to contribute to external heating of preheat chamber. US5989308 discloses a multi-reactor direct reduction system, using large particles of ore and ultimately pellets as starting material. In said disclosure off-gas from the main melter-gasifier is fed directly to a multi-step dry dedusting system.

[0008] Various type of steelmaking furnaces i.e. Electric Arc Furnace, Basic Oxygen Furnace or others are using oxygen injection or blowing to create reaction with carbon contained in the raw material or injected. The reaction helps generating heat for melting and reducing carbon content to convert iron into steel. The result of this reaction is the off-gas from the furnace with high temperature and high content of CO and H2.
[0009] The Invention is created to utilize the heat and reduction atmosphere of the off-gas from various types of steelmaking furnace to heat the pellets and to induce reduction of iron oxide in the pellets by carbon contained in the pellets. The product from the reaction is hot Direct Reduced Iron (DRI) which will be charged directly into the furnace as raw material for steelmaking process. This is to prevent re-oxidation and to save energy by putting heat contained in DRI into the furnace.
[0010] Pellet is made of iron oxide incorporated with carbonaceous material. The iron oxide could be iron ore, millscale, dust or other form of iron oxide generated as product or waste from other processes.

Full Disclosure of the Invention

[0011] Figure 1 Shows the process of Method of Utilizing Furnace Off-gas for reduction of Iron Oxide Pellets
[0012] The invention utilizes the off-gas from furnaces (2), which could be Electric Arc Furnace or Basic Oxygen Furnace or other types of furnace with reducing off-gas, for reduction of pellets incorporated with iron oxide and carbonaceous material.
[0013] The reactor (5) is located above the furnace not directly on top but offset to aside so it does not obstruct operation when charging input material into the furnace.
[0014] A portion of the off-gas is led into the inside of reactor (5) entry the bypass duct (3) and out of the reactor (5) to rejoin the primary duct. The bypass duct (3) allows utilization of existing primary suction (7) that is usually required in all furnaces (2) to induce a portion of primary off-gas flow into Reactor (5) without dedicated fan or equipment to produce suction (7) or negative pressure specifically for Reactor.
[0015] Off-gas from furnace, as it goes into Reactor (5), heats up the reactor (5) and keeps it under reducing atmosphere. At the high temperature, the reaction goes and iron oxide pellets are reduced to direct reduced iron (DRI). The re-oxidation of iron in DRI is prevented by the reducing atmosphere in the reactor (5). There is a burner (6) inside the reactor (5) to operate as supplementary to the off-gas to maintain temperature and reducing atmosphere inside the reactor (5). Discharging pallets from storage (1) into reactor (5) is made via a discharging mechanism as well as discharging of direct reduced iron into the furnace. The timing of the is to be made in the right sequence with the process of the furnace (2) in order to allowing sufficient time for melting DRI into liquid and for decarburizing to reach desired carbon content of liquid steel.
[0016] It is important that the penetrating of external air into the reactor (5) is minimized. Most of the furnaces (2) need to have movements to accommodate several steps of the steelmaking process (i.e. input material charging, de-slagging or tapping) whereas the primary dedusting system is in fixed position. This makes a split or a gap between the primary duct and the off-gas outlet of the shell is inevitable. The inlet of the bypass duct (3) is made as inner duct of primary duct, therefore, the external air coming via the gap between furnace and primary duct tends to flow along the suction (7) of primary dedusting line. The inner duct, is protected by negative pressure of the outer duct, receive mainly off-gas from the furnace. There are also dampers (4) at the inlet and outlet duct of the reactor (5) to control flow rate and to isolate the reactor (5) when required.

[0018] As previously described under the "Complete disclosure of the invention" section.

1. A method for utilizing furnace off-gas for reduction of Iron Oxide Pellets wherein:

- the iron oxide in the Iron Oxide Pellets is directly reduced and re-oxidation is prevented in a reactor by leading furnace off-gas directly into said reactor, and wherein

- the iron oxide pellets in the reactor are directly heated by the off-gas and under the reducing atmosphere in the reactor provided by the off-gas to reduce the iron oxide in the pellet while preventing re-oxidation, and wherein
the entry of the bypass duct at furnace side is made of double ducts with the inner duct leading to reactor and the outer duct has suction pressure to take atmospheric air and minimize the penetration into inner duct; and/or
the bypass duct has dampers to control inlet and outlet flow of Reactor.

2. The method according to claim 1, wherein
the reactor is equipped with a burner to control temperature and reducing atmosphere.

3. The method according to claim 1 or claim 2, wherein
the reactor is installed above the furnace with some offset degree to the side so it does not block furnace operation but it still can discharge DRI into furnace by gravity.

4. The method according to any of the preceding claims, wherein
the reactor has discharging mechanism to discharge product of reaction (DRI) into furnace immediately after reaction in order to taking energy contained in the DRI back to the furnace and preventing re-oxidation. 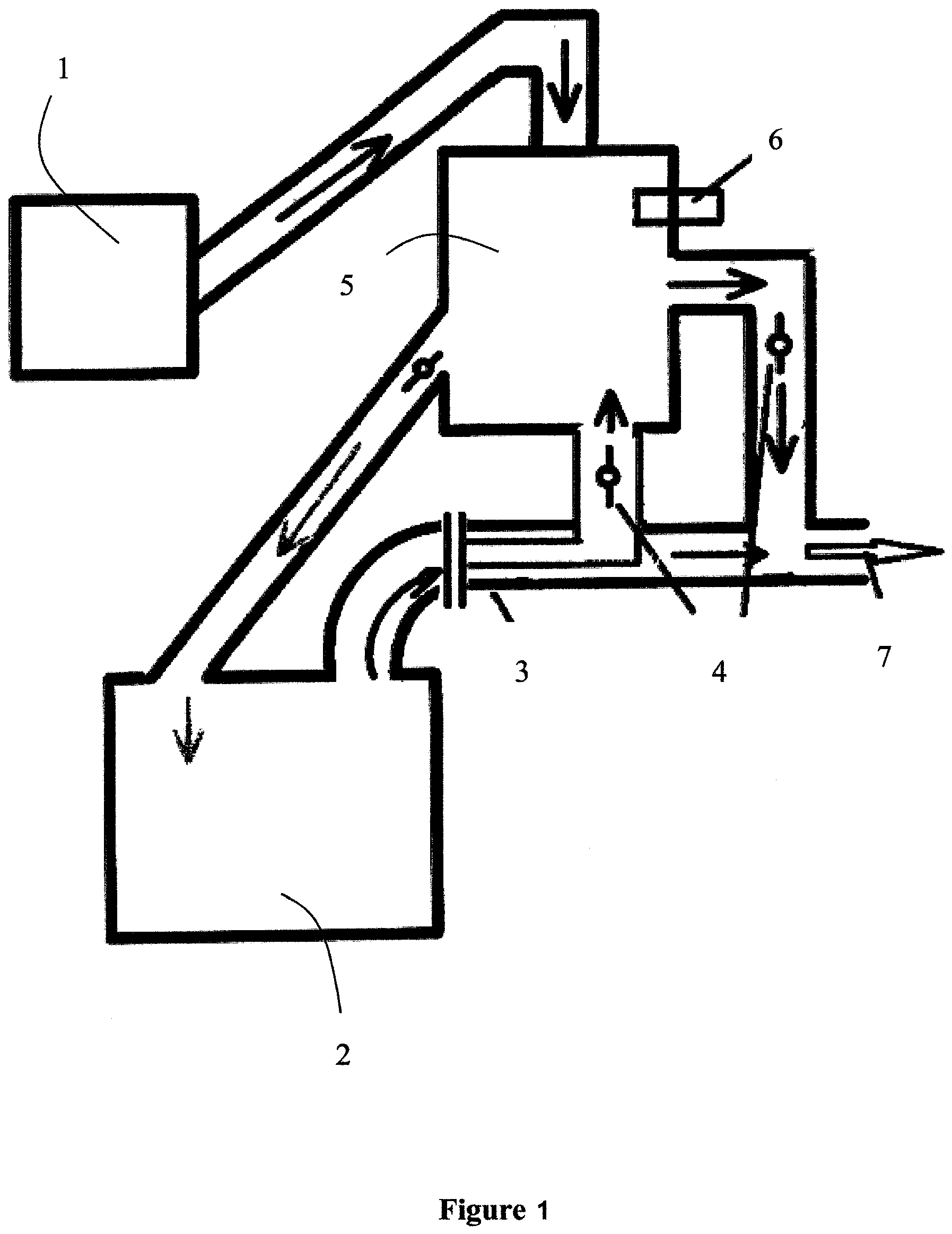