[0001] The invention relates to an arrangement for moving a storage space, a bracket or a waste-bag rack located in a cabinet, whereby, when opening a door or a drawer of the cabinet, it is possible by means of a mechanism related to the opening to implement the transfer of said storage space, bracket or rack fitted inside the cabinet and arranged to move in there out of the cabinet to reveal them.
[0002] Previously are known in connection with kitchen fittings e.g. mechanisms connected to a cabinet door in which, when opening the door, a shelf of the cabinet transfers outwards from the cabinet to facilitate the use of the shelf. Furthermore are known cabinet doors on the inner side of which are fastened shelves as large as possible but still so that they do not prevent the door from opening. Also in this case, goods from the cabinet can be taken out only by opening the door.
[0003] From the publication DE 3001707 A1 is known an extension plate, which in the rest position, is concealed beneath the work top covering of a cupboard. It runs on lateral extension rails set in the base cupboard to run on inclined rails the leading edge of the extension plate lies in the extended position level with the work top. To ensure a level extension plate in the use position a lift is provided on the extension rails to raise the trailing edge of the extension plate to the level of the worktop. The extension plate is telescopic whilst the lift can be a lever which is connected beneath the extension plate where it is under the effect of a tensile spring.
[0004] From the publication EP 1881282 A2 is known a refrigerator which includes a cabinet within which is arranged an upper fresh food compartment and a lower freezer compartment. A freezer basket is slidably supported in the freezer compartment, preferably for concurrent movement with a freezer door. The freezer basket is coupled to a lifting mechanism that selectively shifts the freezer basket from a first or lowered position to a second or raised position in order to facilitate removal of items from the freezer basket. The lifting mechanism can be formed by a mechanical, electrical or pneumatic system.
[0005] From the publication US 5215363 A is known an apparatus includes a container member slidably mounted between spaced parallel container support side walls, wherein the container support side walls are mounted within a cabinet housing. The container support includes a gear rack mounted from the container support to a rear wall of the container member, and further includes a lid control cable extending from the container member to the lid directed through cooperative pulleys to effect simultaneous opening of the lid upon projection of the container member exteriorly of the cabinet housing relative to the spaced container support side wall.
[0006] From patent US7794027 is known a storage-bin bracket with its base sliding on rails horizontally out of the cabinet. The sliding occurs by opening the door. The bracket and the base being out of the cabinet, the storage bin and its bracket are liftable to the top position, a pivot mechanism allowing the lifting. The lift is relieved by a spring. The gas spring also assists in relieving and dampening motion speed.
[0007] A disadvantage of the arrangement described in US patent 7794027 is arranging, first, the motion of the base and the storage-bin bracket outwards and then, separately, the motion of the storage-bin bracket upwards. When the storage bin is transferred back to the cabinet, it must be first pressed down to its base and the storage bin and its base must be then pushed into the cabinet.
[0008] A disadvantage of other known arrangements described above is that the shelf comes out on the same level as it is in the cabinet. Thus in these, only the topmost outcoming shelf is well on view. The other shelves are left below the topmost shelf and in the dark.
[0009] Almost invariably, kitchen fittings include a sink which takes a space below at its point in the cabinet. The sink prevents the use of the top part of the cabinet. Often at this point of the cabinet is located a waste bin set or a waste-bag rack for sorting, whereby it is naturally located in the bottom part of the cabinet. A waste-bag rack being on a lower level than normal is awkward to use, it being either behind a door to be opened or inside a drawer to be pulled out.
[0010] To eliminate these disadvantages and particularly making the waste-bag rack or the waste-bin set in question more accessible of its position, the present invention provides a substantial improvement to prior art. This improvement is achieved when e.g. a storage space, a bracket or a bag rack intended to be a waste station or some other storage space in a cabinet is arranged movable. It is characteristic of the invention what is claimed in the independent claims 1 and 2.
[0011] An advantage of the invention is that, in addition to conventional shelf spaces, a shelf or drawer space or equivalent at the point of the sink can be made more accessible when it also transfers e.g. by pulling the front edge of the drawer outwards and, more importantly, upwards. The size of the kitchen waste station is precisely such that it fits below the sink. In this invention, it has been realised that it is easily transferrable by means of mechanisms outwards and upwards from there by supplying a motion for it from the front edge of the drawer. Also, storage spaces in other parts of the cabinet can be pulled out and better revealed in the way of the invention.
[0012] Next, the invention will be described in more detail with reference to the accompanying drawing in which

[0013] Fig. 1 schematically shows an arrangement according to the present invention in a kitchen cabinet 1 at the point of a sink 2. To the frame of the cabinet 1 is fixedly fastened a telescopic slide rail 3. The out-coming end of the slide rail 3 is again fastened to a waste rack 4. The waste rack 4 is further fastened slidably to an out-pullable front wall 5, 6. When the wall 5, 6 is pulled outwards, the waste rack 4 is able to lift upwards supported by slide rails 7 fastened inside the front wall 5, 6. The slide rail 3 guides the waste rack 4 to lift, as shown in Fig. 2, at the same time as the waste rack 4 transfers outwards. The telescopic slide rail 3 is fixedly fast in the cabinet wall and keeps its direction.
[0014] Fig. 2 shows that the drawer front wall 5, 6 keeps its height position when pulled outwards, but the waste rack 4 lifts and becomes well revealed and accessible. To operate well, this arrangement requires e.g. in connection with the out-pulling a relieving spring, such as a gas spring 16, which is shown in Fig. 2 beside the slide rail 3. The relieving spring can also be installed as fastened on the wall 5, 6 beside the slide rail 7 in the vertical direction, whereby its relieving force is conveyed from downwards to the waste rack 4 or the utmost end of the slide rail 3.
[0015] Fig. 3 shows another version which shows as an example the transfer of a waste-bag rack 9 outwards and upwards as the front wall (not in the figure) is being pulled upwards. Fig. 3 shows the waste-bag rack 9 moving according to the invention and its also moving bracket part comprising side parts 15 and slide rails 10 directed upwards from it supported by which rails the waste-bag rack 9 moves up and down. The bracket part only moves horizontally out of the cabinet 1 and into the cabinet. It makes this motion supported by rotated profiles 17 of the top edges of the side parts 15. These profiles have supportive counter shapes on the interior walls (not shown in the figure) of the cabinet. This arrangement is also intended to be located at the point of the sink and the waste-bag rack 9 is positioned below the sink when it is totally inside the cabinet.
[0016] When the bracket part starts to move from the position shown in Fig. 3 out of the cabinet in the direction of the arrow, follower rolls 8 being at the top edge behind the waste-bag rack start to roll along bent-to-shape plate rails 11. The plate rails 11 have obliquely upwards directed sections 12 and 13 based on which the waste-bag rack 9 lifts at the same time as it moves out of the cabinet. Instead of the follower rolls 8, it is also possible to use slipper pads. In this case, a gas spring 14 is in the middle of the rack and it ensures that the waste-bag rack 9 lifts along with it when the follower rolls 8 allow it to move upwards. The plate rails 11 with their sections 12 and 13 are fixedly connected to the cabinet and they are the only non-moving parts in Fig. 3.
[0017] Fig. 4 shows how the waste-bag rack 9 has moved with its bracket parts outwards from the cabinet and, at the same time, the waste-bag rack 9 has lifted upwards supported by the slide rails 10 and lifted by the gas spring 14.
[0018] Figs. 5-7 show the lifting of a storage-bin bracket 25 implemented by means of a mechanism combination to the top position at the same time as a moving bottom part 24 of the storage-bin bracket 25 transfers out along with a cabinet front wall 26. A first toothed bar 18 is fastened on the inner surface of the cabinet wall. A second toothed bar 19 is connected to the storage-bin bracket 25. There are slide rails 28 for the storage-bin bracket 25 for a vertical motion in said moving bottom part 24. Between the toothed bars 18 and 19 on a common axis 22 are arranged cog wheels 20 and 21 which, when being in contact with their corresponding toothed bars 18, 19, convey from the horizontal motion of the bottom part 24 of the storage-bin bracket 25 the vertical motion to the storage-bin bracket 25. Here is also shown a gas spring 27 which relieves the opening of the cabinet door and, at the same time, the lifting of all of the mass being lifted upwards.
[0019] The transfer of the interior part of the cabinet outwards and upwards according to the invention can also be used in other parts of the cabinet than at the point of the sink. The moving interior part of the cabinet can be a part of a drawer or a space behind the cabinet door. The invention will not be limited to the described embodiments but it can be varied within the scope of the inventive idea presented in the claims. 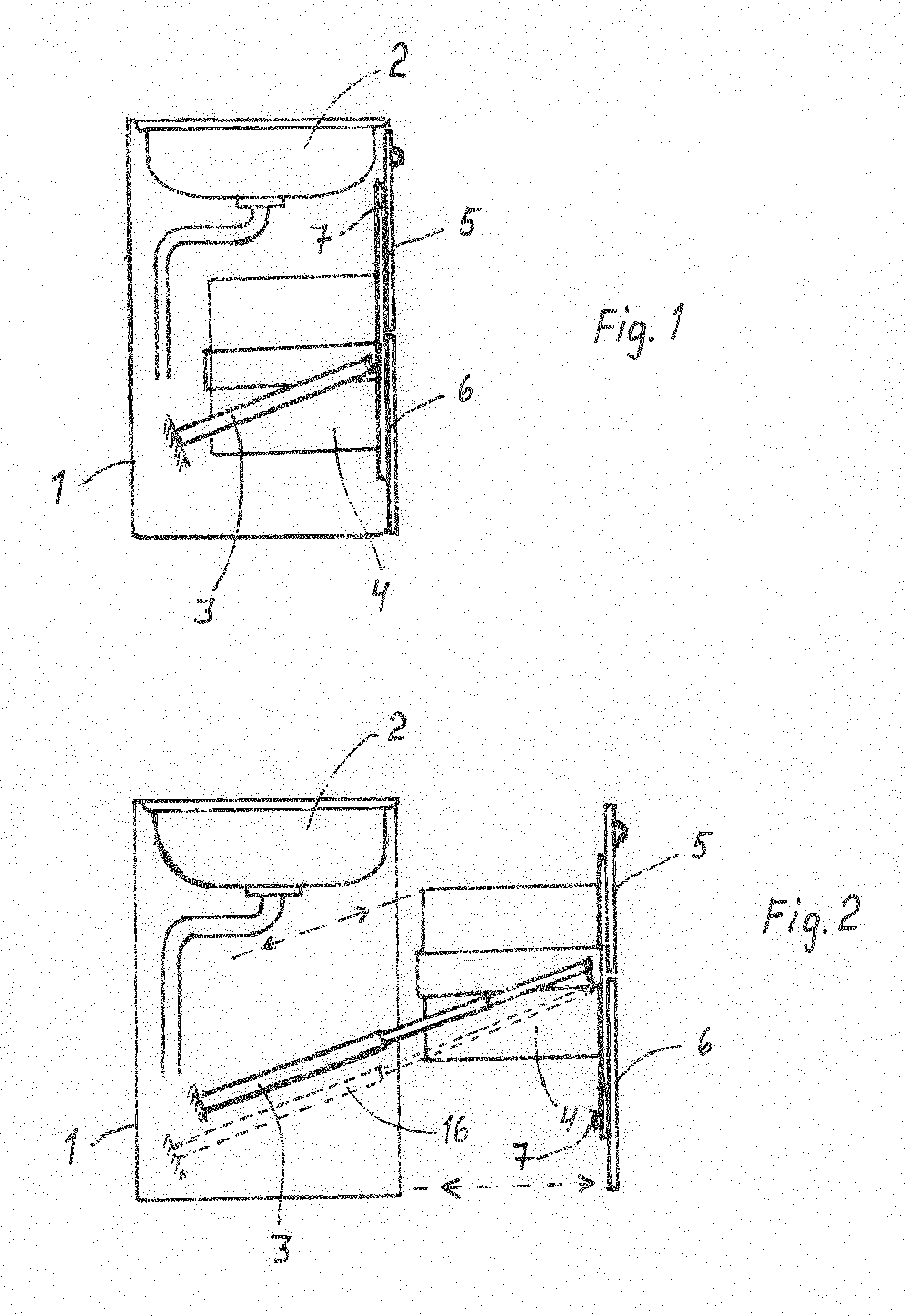 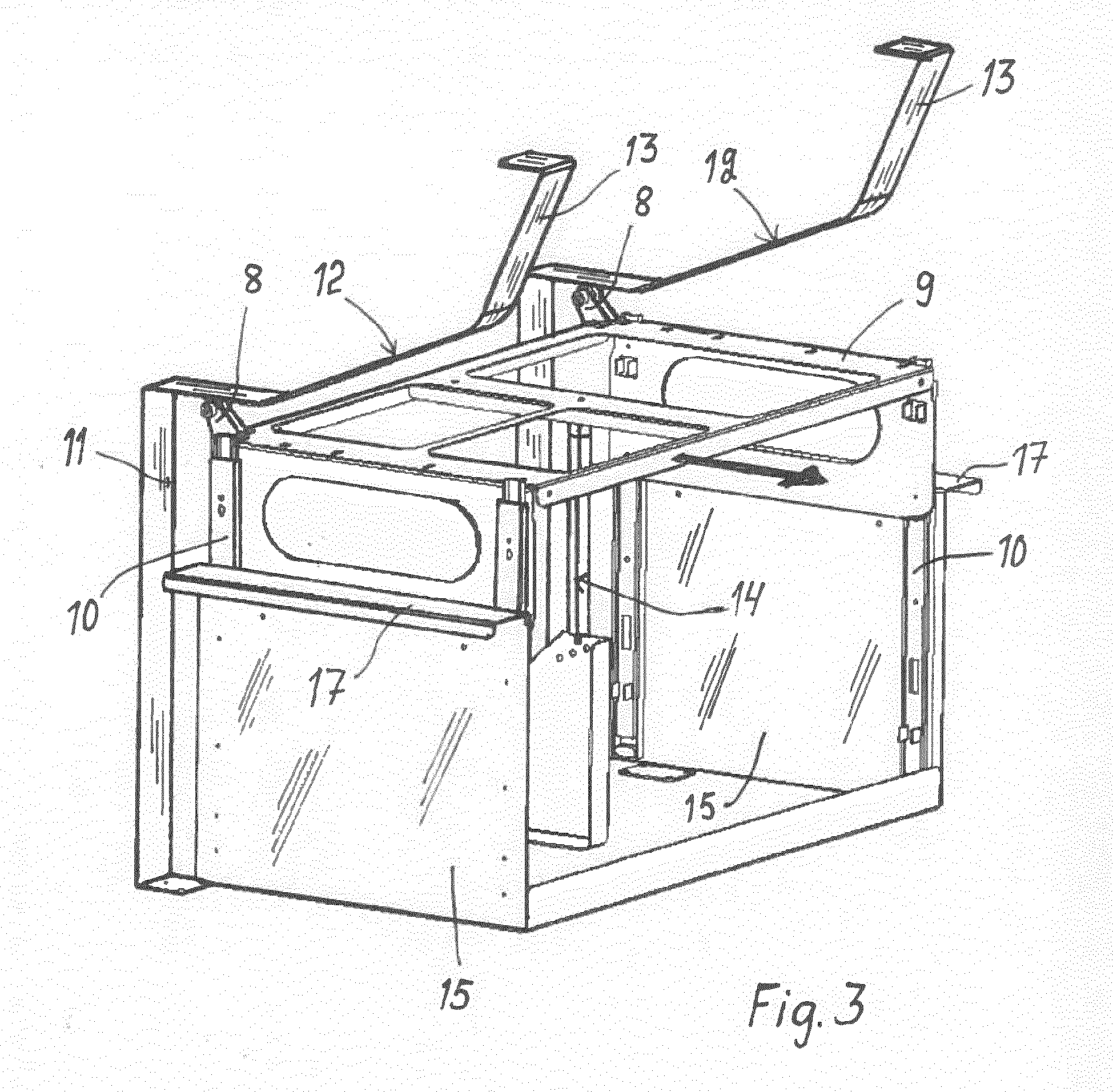 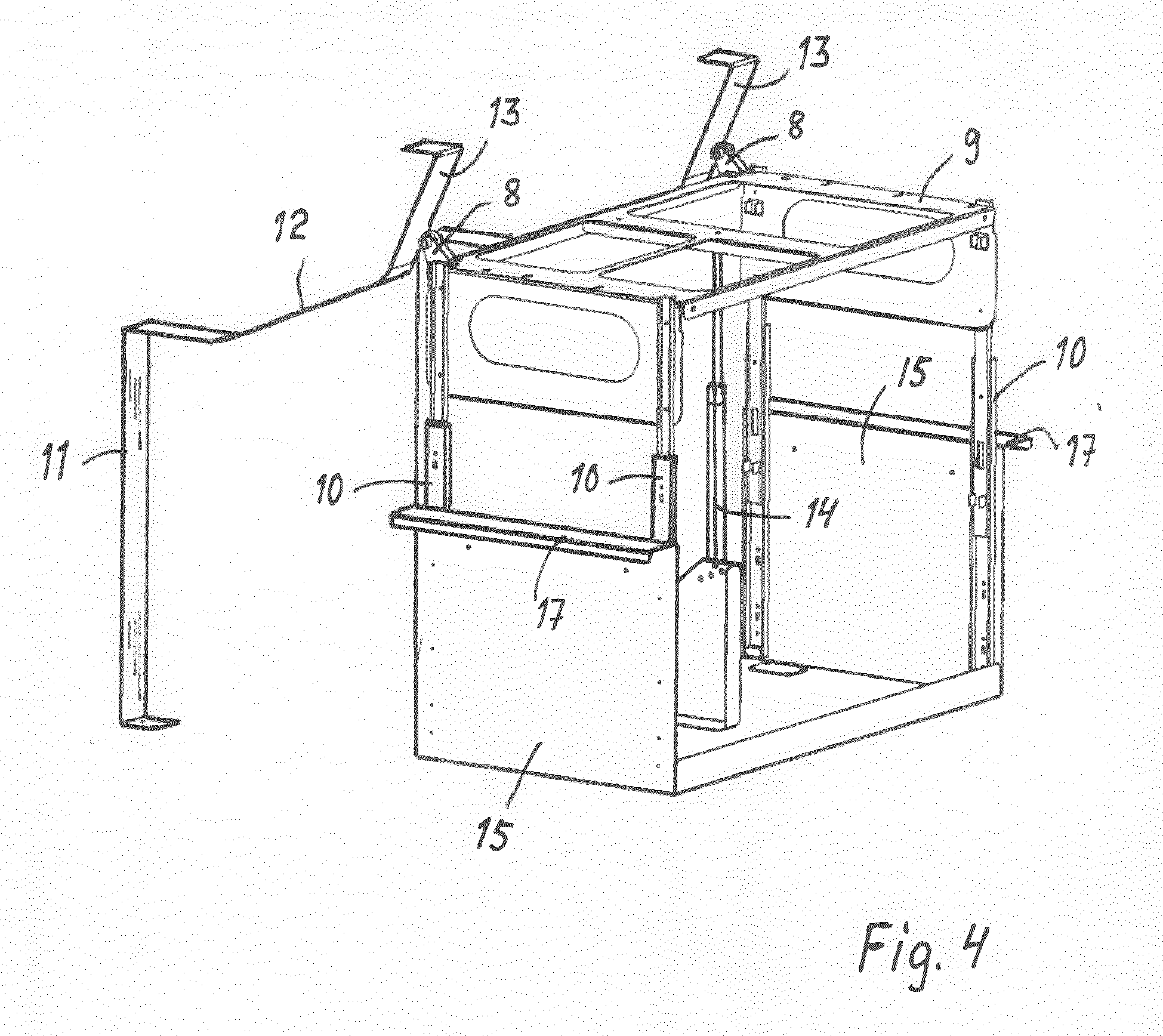 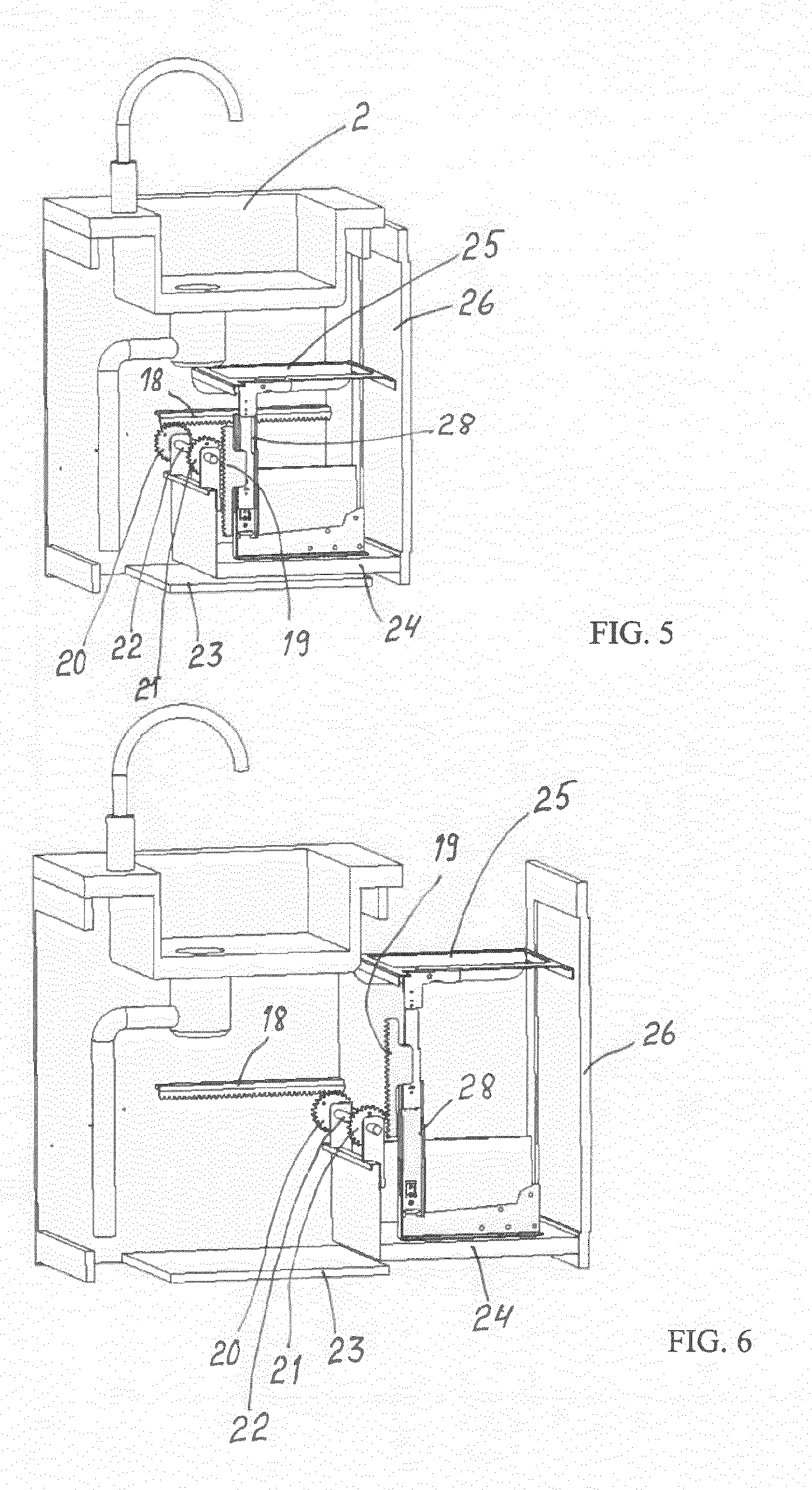 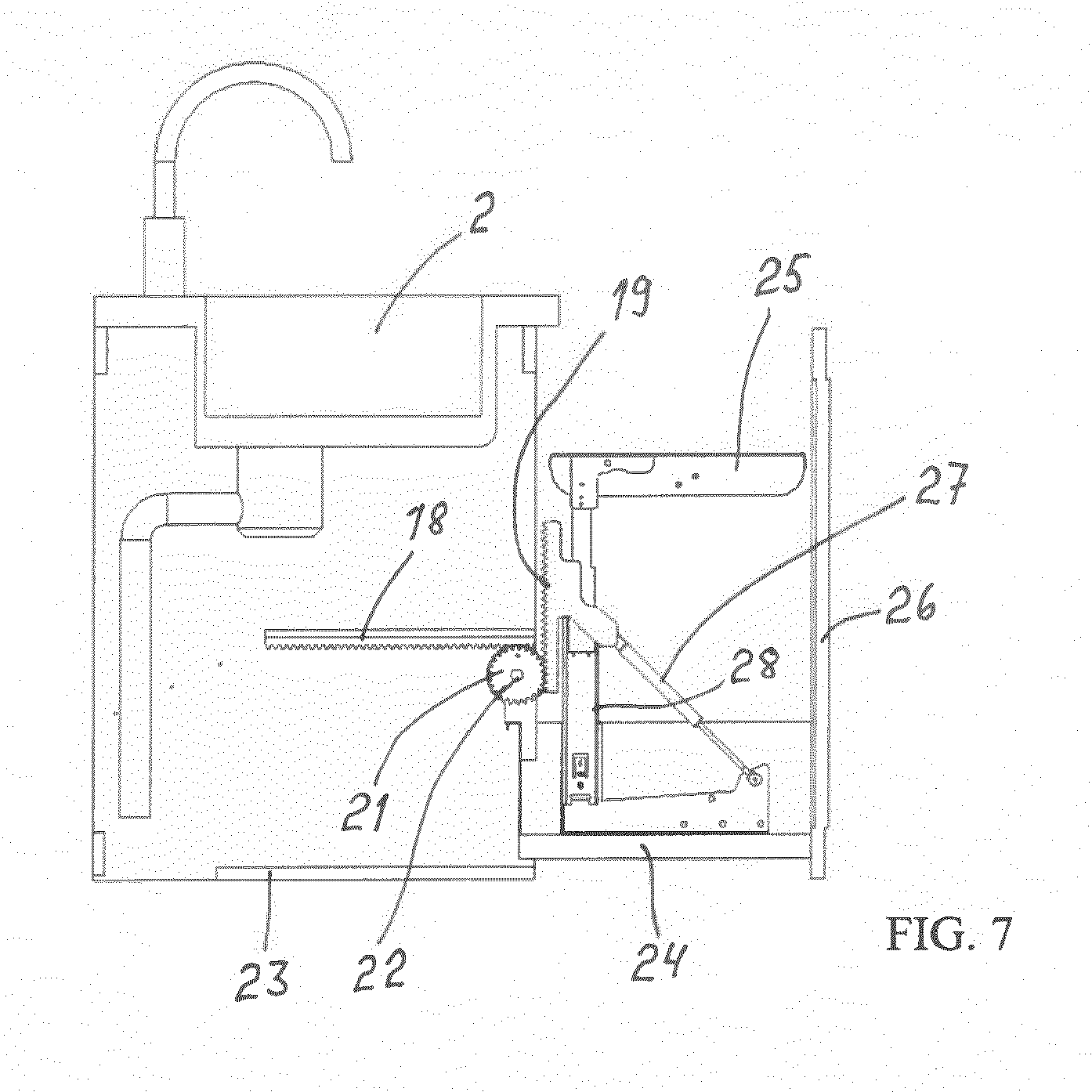