FIELD OF THE DISCLOSURE

[0003] The related patent applications describe two-stroke cycle, compression-ignition, opposed-piston engines in which pairs of pistons move in opposition in the bores of ported cylinders. A two-stroke cycle opposed-piston engine completes a cycle of engine operation with two strokes of a pair of opposed pistons. During a compression stroke, as the pistons begin to move toward each other, charge air is admitted into the cylinder, between the end surfaces of the pistons. As the pistons approach respective top center ("TC") locations to form a combustion chamber the charge air is increasingly compressed between the approaching end surfaces. When the end surfaces are closest to each other, near the end of the compression stroke, a minimum combustion chamber volume ("minimum volume") occurs. Fuel injected directly into the cylinder mixes with the compressed charge air. Combustion is initiated when the compressed air reaches temperature and pressure levels that cause the fuel to begin to burn; this is called "compression ignition". Combustion timing is frequently referenced to minimum volume. In some instances, injection occurs at or near minimum volume; in other instances, injection may occur before minimum volume. In any case, in response to combustion the pistons reverse direction and move away from each other in a power stroke. During a power stroke, the pistons move toward bottom center ("BC") locations in the bore. As the pistons reciprocate between top and bottom center locations they open and close ports formed in respective intake and exhaust locations of the cylinder in timed sequences that control the flow of charge air into, and exhaust from, the cylinder.
[0004] Combustion is influenced by the degree to which compressed charge air is mixed with injected fuel. Motion and turbulence of charge air in the cylinder are critical factors in facilitating air/fuel mixing and combustion. In an opposed-piston engine, pressurized charge air may enter the cylinder in a tangential direction, which causes the formation of a vortex structure (commonly referred to as "swirl") that spirals longitudinally in the cylinder, across the direction of fuel injection. The bulk swirling motion breaks up the injected fuel streams and entrains fuel droplets into the moving charge air. In the short amount of time preceding ignition it is desirable to intensify the turbulence of charge air motion by generating additional bulk air flow structures. For this purpose, two-stroke, opposed-piston engines are equipped with pistons having crowns with contoured end surfaces that interact with swirling charge air in the cylinder and with squish flow of charge air from the circular peripheries of the piston end surfaces. The interaction produces additional bulk motion structures (commonly referred to as "tumble") in the form of vortexes oriented transversely or tangentially to the swirl vortex. The result is complex, turbulent charge air motion in the combustion chamber that facilitates combustion and that continues to encourage oxidation of unburned fuel and the products of combustion as the power stroke begins.
[0005] The related applications are directed to two-stroke cycle, compression-ignition, opposed-piston applications in which the piston end surfaces have shapes that add tumble to the bulk airflow structures. In these applications the combustion chamber is defined by bowls running along end surface ridges that extend on opposite sides of a chamber centerline. Concave inner surfaces of the bowls and ridges guide air flow and fuel plumes in the combustion chamber. Convex outer surfaces of the ridges act like ramps to generate tumble from squish flows. While these ridges do contribute to production of tumble, they also pose significant challenges to engine operation and piston thermal management. The ridges present irregular contours with sharp edges that protrude outwardly from the piston end surfaces and cause hot spots in the piston crowns when combustion occurs. The hot spots impair combustion, which reduces the engine's efficiency. They also produce irregular thermal profiles on crown undersurfaces, which are difficult to manage and which necessitate complex internal piston structures to transport liquid coolant. Finally, the ridged end surfaces and the required cooling structures make the pistons difficult to manufacture and add to the costs of engine production and maintenance.
[0006] US 1,582,792 discloses an example of a diesel engine.

[0007] The present application provides a two-stroke cycle, compression ignition, opposed-piston engine and a method of operating same in accordance with the claims which follow.

FIG. 1 is a schematic illustration of an opposed-piston engine of the prior art.

FIG. 2 is an isometric view of a piston of the prior art which has an end surface shaped to form a combustion chamber with the end surface of a counterpart opposed piston

FIG. 3 is an isometric view of a piston according to this disclosure.

FIGS. 5A, 5B, and 5C are longitudinal diametric sectional views of a combustion chamber formed between the opposing end surfaces of a pair of pistons having end surfaces shaped as per FIG. 4, in which the views correspond to parallel planes indicated by lines A-A, B-B, and C-C of FIG. 4.

FIG. 5D is a longitudinal diametric sectional view of the combustion chamber of FIGS. 5A, 5B, and 5C, in which the view corresponds to the line D-D of FIG. 4, which is orthogonal to the lines A-A, B-B, and C-C of FIG. 4.

1. A two-stroke cycle, compression ignition, opposed-piston engine including at least one cylinder with a bore, piston-controlled exhaust and intake ports near respective ends of the cylinder, and a pair of pistons disposed in opposition in the bore, each piston comprising:

the flat end surface (108) meeting a piston sidewall at a peripheral edge (110) having a circular shape that is centered on a longitudinal axis (112) of the piston (100) and that is disposed at a single longitudinal level of the piston;

a pair of notches (118) formed in the end surface and positioned in opposition on the peripheral edge, in alignment with an end surface diameter (122);

the concave bowl having an oblong shape that is elongated along the end surface diameter, between the notches;

the concave bowl being flanked on either side by flat end surface portions (108a and 108b) that extend to the peripheral edge;

the concave bowl having opposing sidewalls (123 and 124) and a curved bottom portion (125) which connects the sidewalls smoothly in a vertical section; and,

a combustion chamber with an elongated, rotationally skewed shape formed between the flat end surfaces of the pistons when the pistons are near top center locations in the bore;

two fuel injectors disposed in diametrical opposition and in alignment with a centerline of the combustion chamber;

2. The opposed-piston engine of claim 1, in which each fuel injector is constructed to emit a fuel spray with three or four plumes.
3. A method for operating a two-stroke cycle, compression ignition engine according to claim 1, by:

introducing swirling charge air into the cylinder between end surfaces of the pistons;

moving the pistons toward each other in a compression stroke; and,

a rotationally skewed shape in a first longitudinal section that is symmetrical with respect to the combustion chamber centerline; and,

injecting opposing fuel sprays into swirling charge air in the combustion chamber through the opposing openings.

4. The method of claim 3, wherein each spray pattern has either three plumes or four plumes. 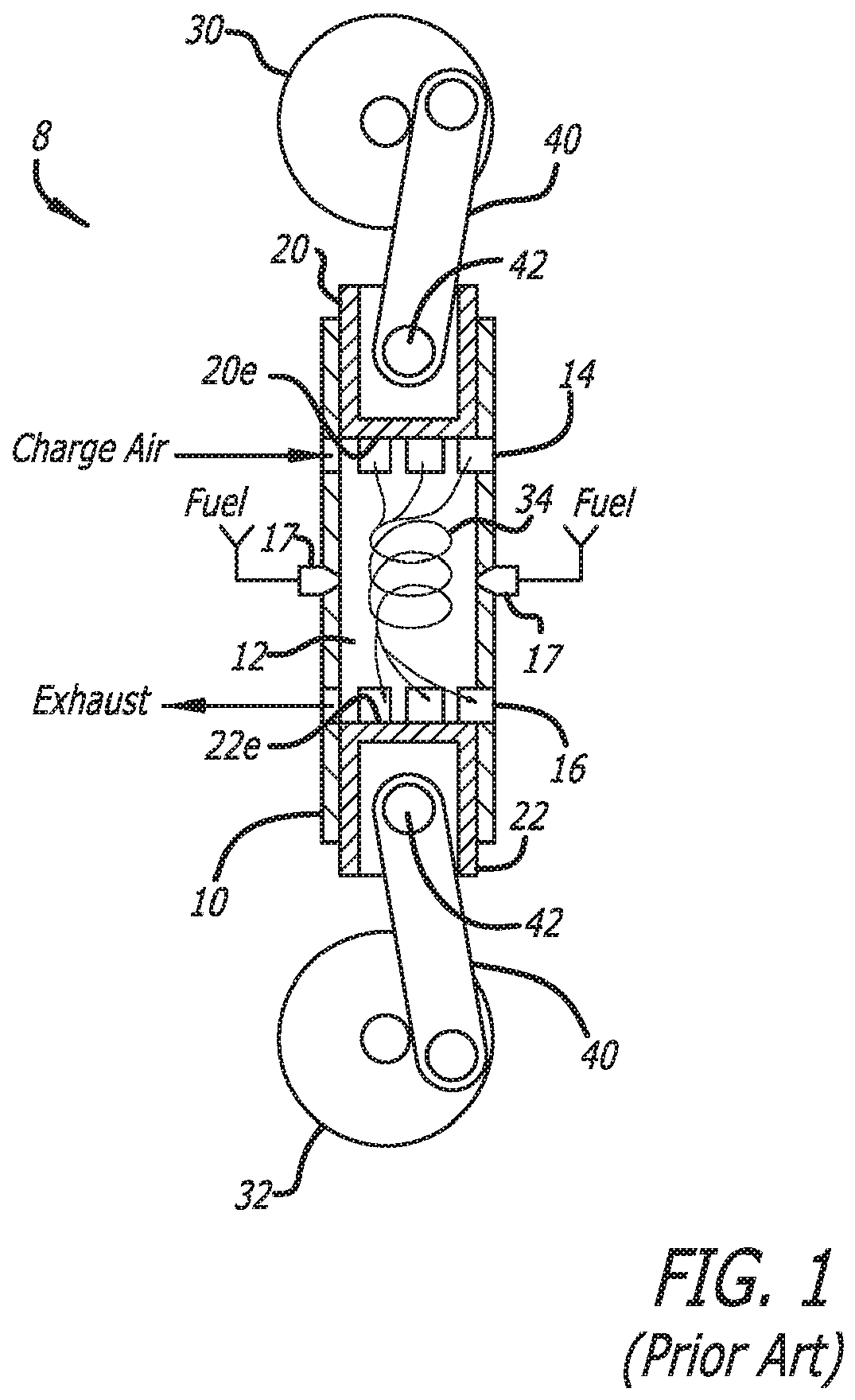 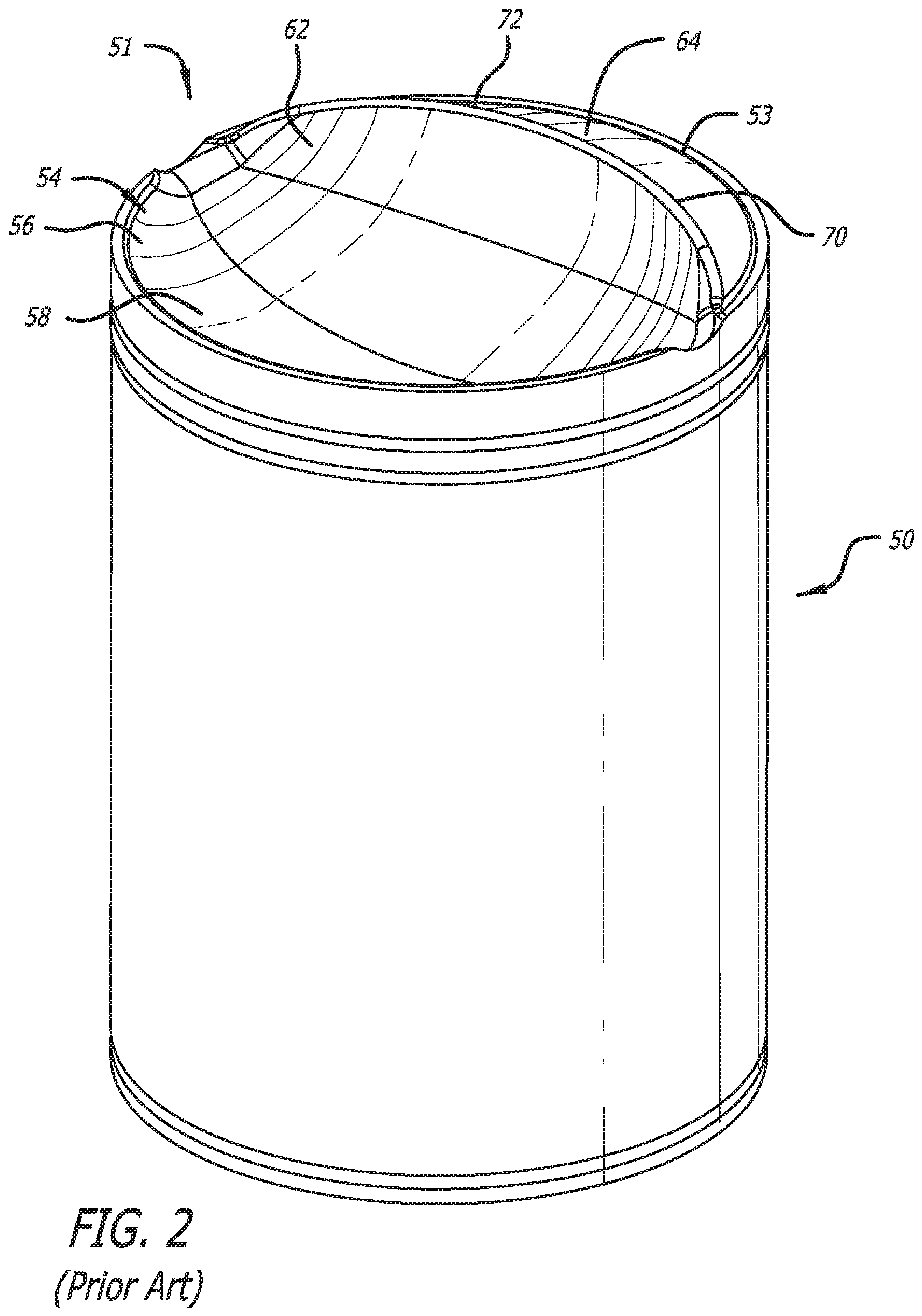 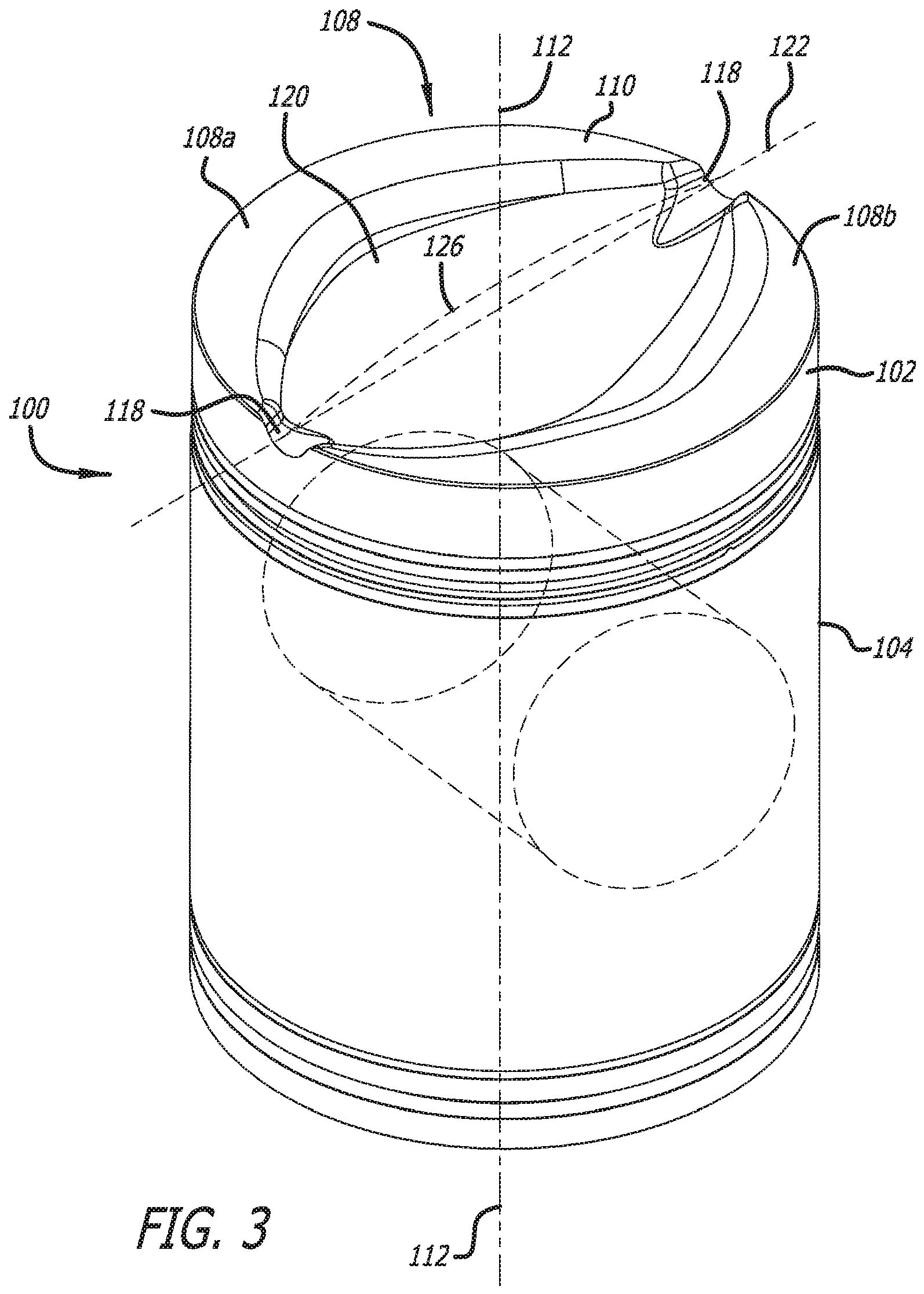 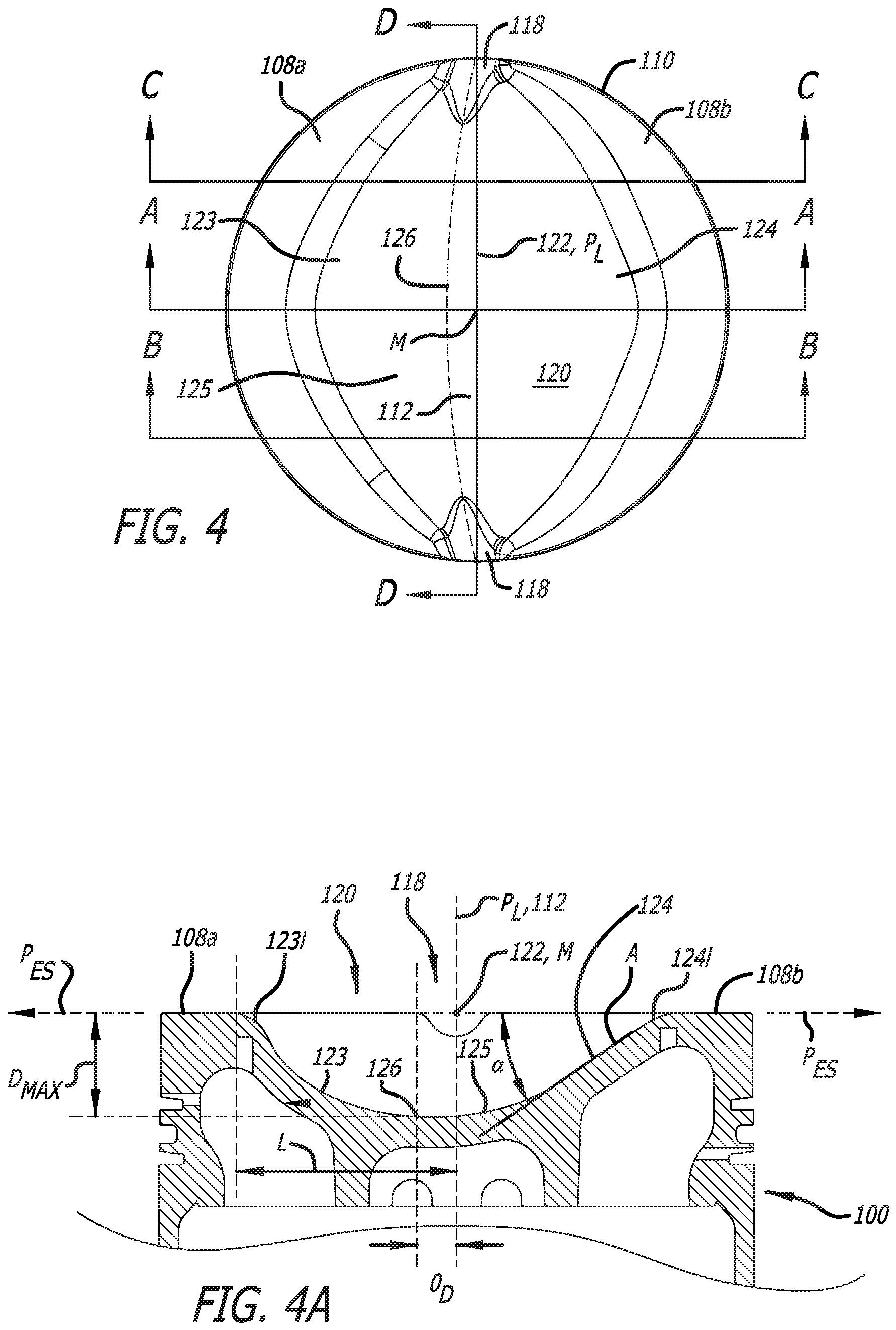 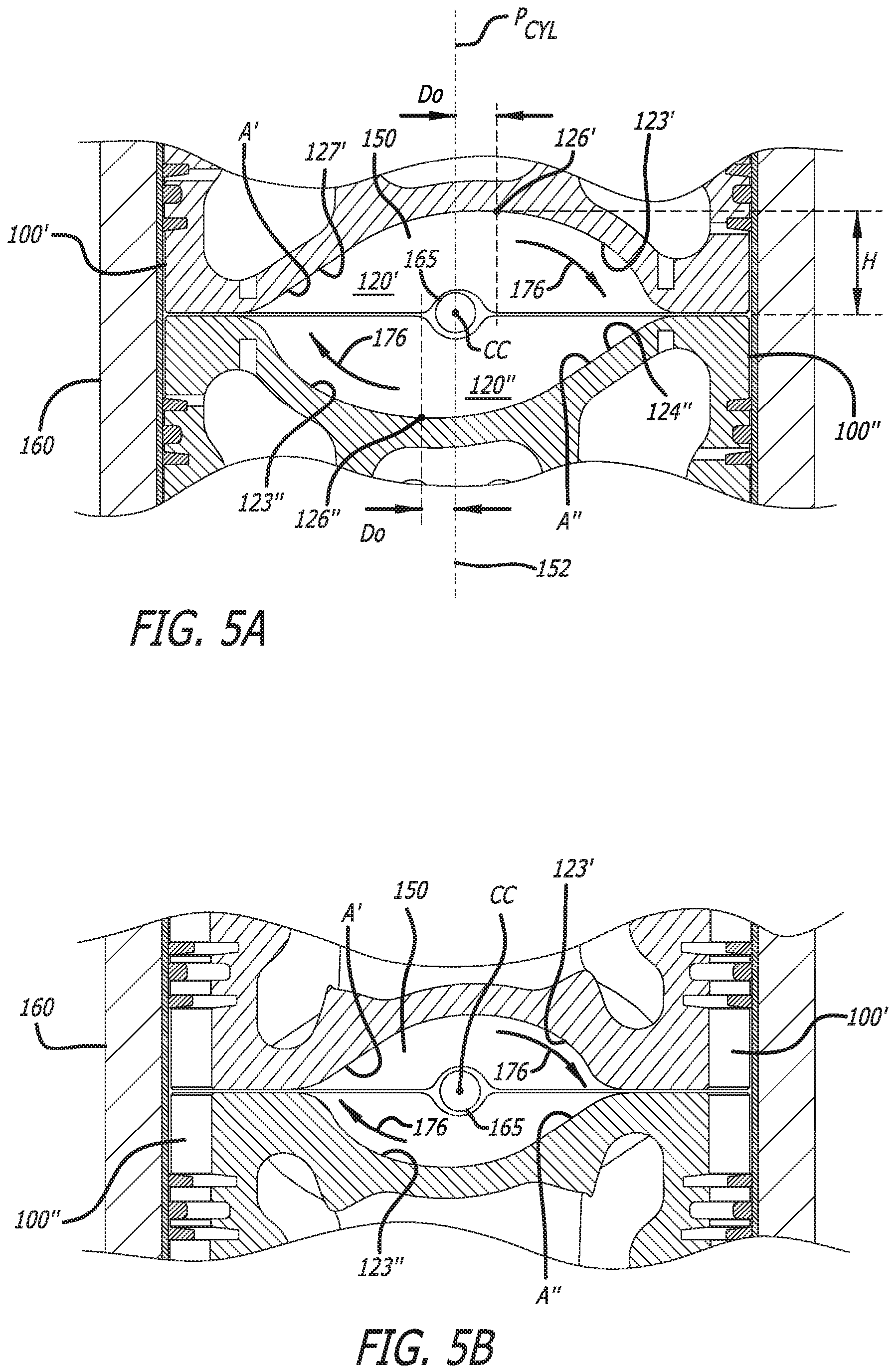 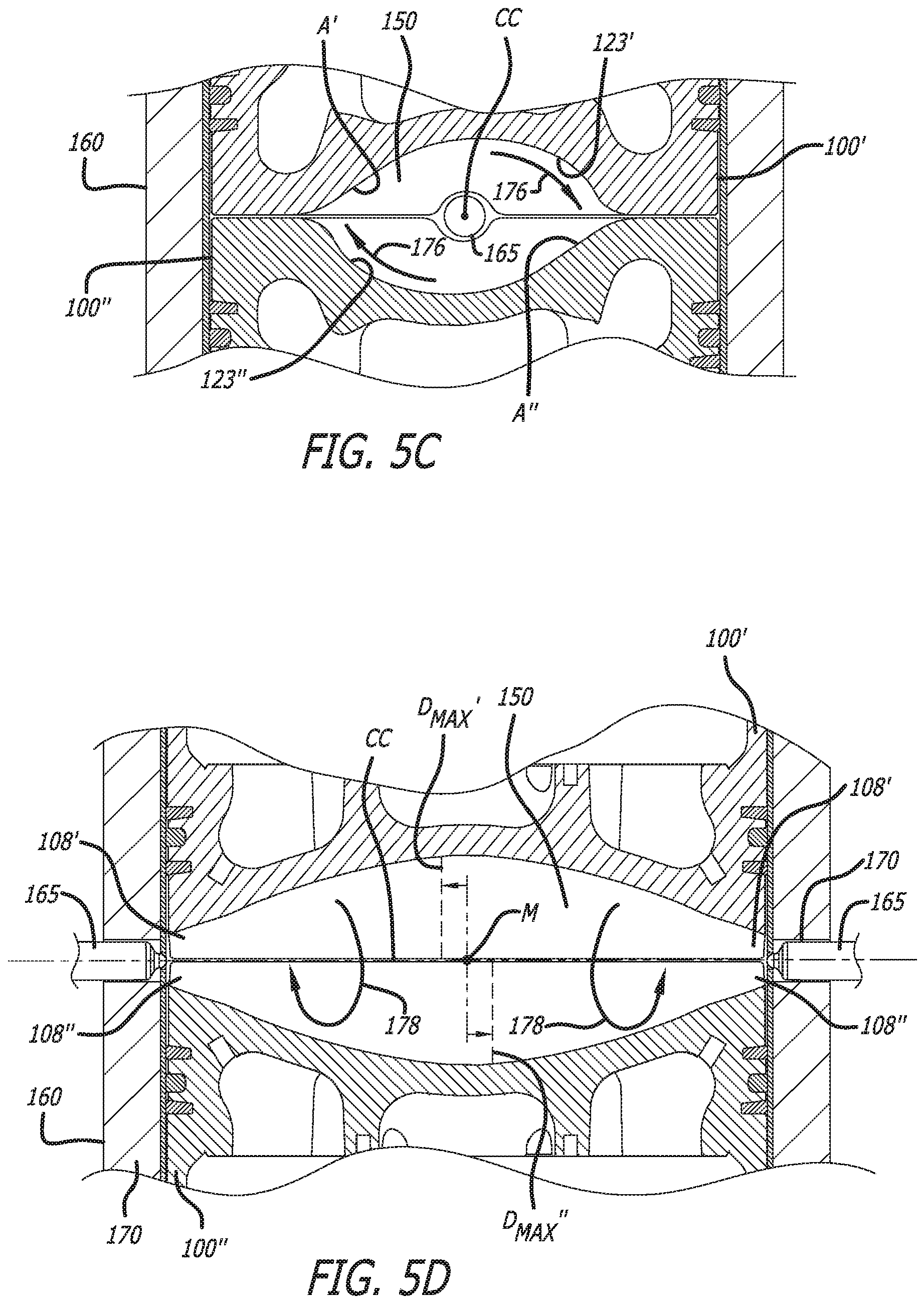