[0018] The present invention provides a positioning apparatus for supporting a rotable arc of a C-arm of a mobile x-ray apparatus during a CBCT acquisition, comprising a base configured for positioning said apparatus on a floor and to support a horizontally positioned C-shaped top surface, said base being adjustable in height, a horizontally positioned C-shaped top surface adapted to support said rotable arc, characterized in that said top surface comprises a friction reduction mechanism embedded in said top surface reducing the friction between said surface and said rotable arc in the direction of a horizontal circular trajectory performed by said arc during the CBCT acquisition, as set out in claim 1.
[0019] The above-described aspects are solved by the apparatus as set out in claim 1.
[0020] In the context of this invention, a mobile x-ray modality generally consists of two main components; the X-ray generator and image system on a portable imaging system (comprising the C-arm) and the workstation unit used to store and manipulate the images. The imaging system unit can perform a variety of movements that allow for use in a variety of conditions and even in interventional procedures such as cardiology, orthopaedics and urology.
[0021] The C-arm provides the appropriate structure to mount an image intensifier or digital flat panel detector and an X-ray tube with a beam limiting device (collimator) positioned directly opposite from each other. In the context of this invention, the C-arm consists of a suspension system or C-arm stand, a suspension point for the rotable arc, and the rotable arc itself. The inner C-arm is the C-shaped rigid arch on which the detector and source are mounted directly. In the context of this invention, the inner C-arm is called the rotable arc. The rotable arc is captured and held (at least partially) in an enveloping structure which is called the outer C-arm. This outer C-arm is pivotally attached to a (mostly vertically oriented) stand by means of a pivoting mounting structure. This pivoting mounting structure can be moved up or down on the stand.
[0022] The outer C-arm serves as a crawler carriage which is intended to capture and propagate the inner C-arm along a circular trajectory which spans typically 210-220 degrees in total.
[0023] The C-arm is capable of many movements. When the C-arm is positioned in it's upright position (the x-ray source and collimator oriented upwards, and the detector bottom wards), the following movements are supported by a typical device (the figures are measured on an actual device and serve as an example only):
[0024] In the context of this invention, this latter C-arm rotation is called the horizontal circular trajectory of the C-arm presuming that the C-arm structure is rotated into the horizontal position, which is the position suitable for a CBCT acquisition of an upright or standing subject. This movement is effectuated on the inner C-arm by the motor in the crawler carriage of the outer C-arm structure. In the context of this invention, the inner C-arm performs the horizontal circular trajectory which spans a maximum of 210 degrees during the CBCT acquisition. The source-detector pair travels over an arch of about 210 degrees (180 degrees plus fan angle) in order to collect the required projection data for a cone beam image reconstruction.
[0025] The invention applies to mobile x-ray devices, of which the mobile aspect relates to the feature that the entire modality can be moved from one location to the other. In other words, the system including the C-arm is mobile and can be easily moved and repositioned at one location.
[0026] The docking mechanism of the present invention is a two-part mechanical disposition of which one part is implemented on the mobile X-ray modality and the other on the support and positioning apparatus of this invention. More particularly and preferably, there is a locking mechanism foreseen at the modality side which can clamp the mobile x-ray system to especially foreseen points at the support and positioning apparatus side. The docking mechanism ensures that the mobile x-ray modality can be firmly but removably attached to the positioning apparatus, and this at precisely predetermined clamping points, in order to ensure a predetermined and firm coupling of both devices.
[0027] Specific examples and preferred embodiments are set out in the dependent claims.
[0028] The present invention is beneficial in that the support apparatus as disclosed in this application enables the use of a standard mobile x-ray device (C-arm) to perform CBCT acquisitions with horizontal C-arm movement.
[0029] The present invention overcomes the mechanical constraints of a standard mobile x-ray device to ensure a stable and yet smooth movement of the C-arm during the circular movement for a CBCT acquisition. A further advantage of the disclosed system is that the mobile x-ray device can easily be mounted and dismounted from the supporting apparatus by means of the docking mechanism. This ensures that the mobile x-ray device can still be used as before. Another advantage is that no elaborate calibrations or measurements need to be performed to account for the mechanical deformations of the acquisition geometry during horizontal positioning of the arc. Also, vibrations of the entire system which are typically induced by the movement of the arc during the acquisition cycle can be prevented.
[0030] Further advantages and embodiments of the present invention will become apparent from the following description and drawings.

1. positioning apparatus for supporting a rotable arc [41] of a C-arm of a mobile x-ray apparatus [40] during a CBCT acquisition, comprising:

- a base [20] configured for positioning said apparatus on a floor and to support a horizontally positioned C-shaped top surface [10],

- a friction reduction mechanism [11] embedded in said top surface reducing the friction between said surface [10] and said rotable arc [41] in the direction of a horizontal circular trajectory [46] performed by said arc during the CBCT acquisition.

- the apparatus of claim 1,

- a mobile X-ray device with a C-arm gantry supporting an X-ray source and digital detector positioned in a diametrically opposing configuration, and allowing a circular movement around the object to be imaged. 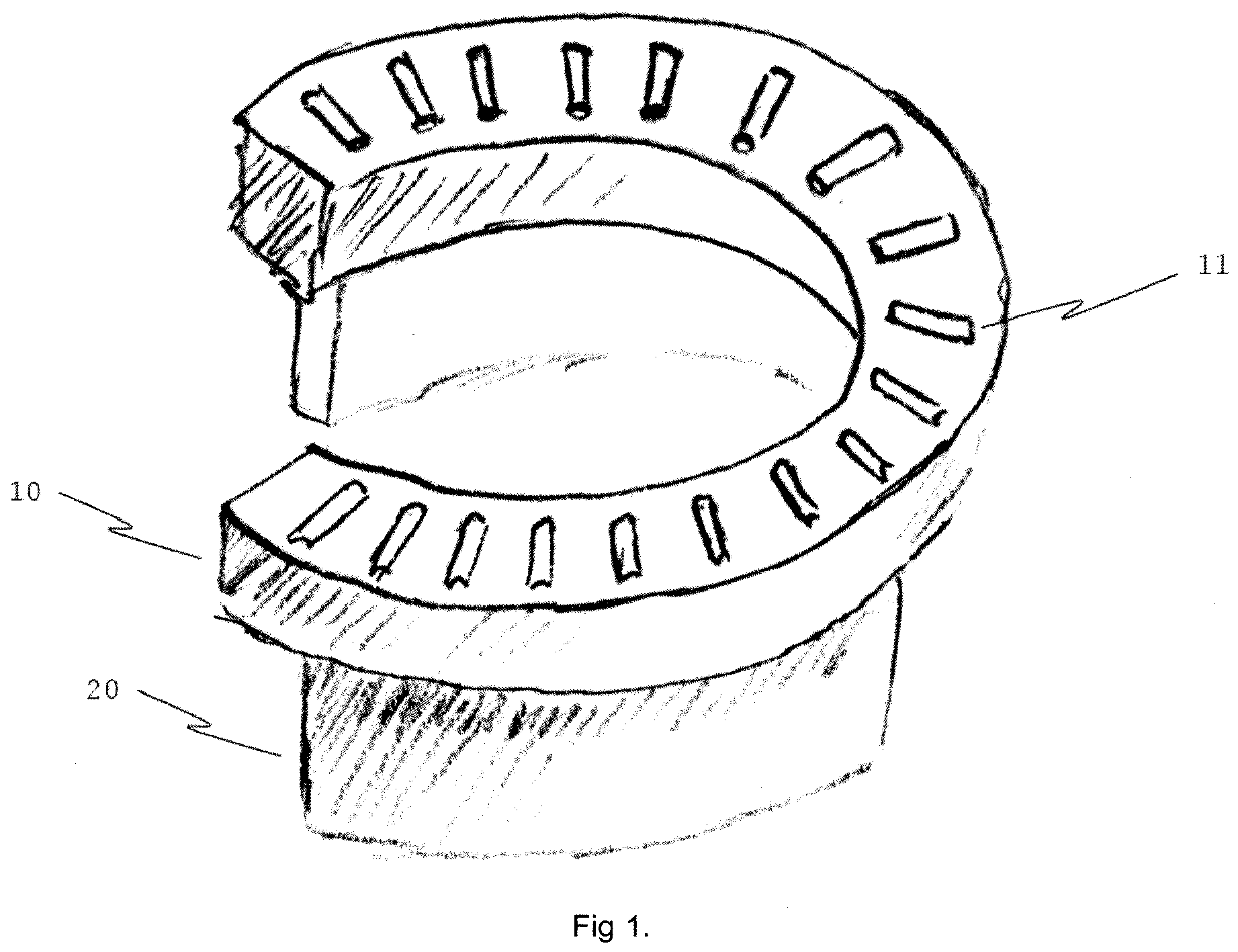 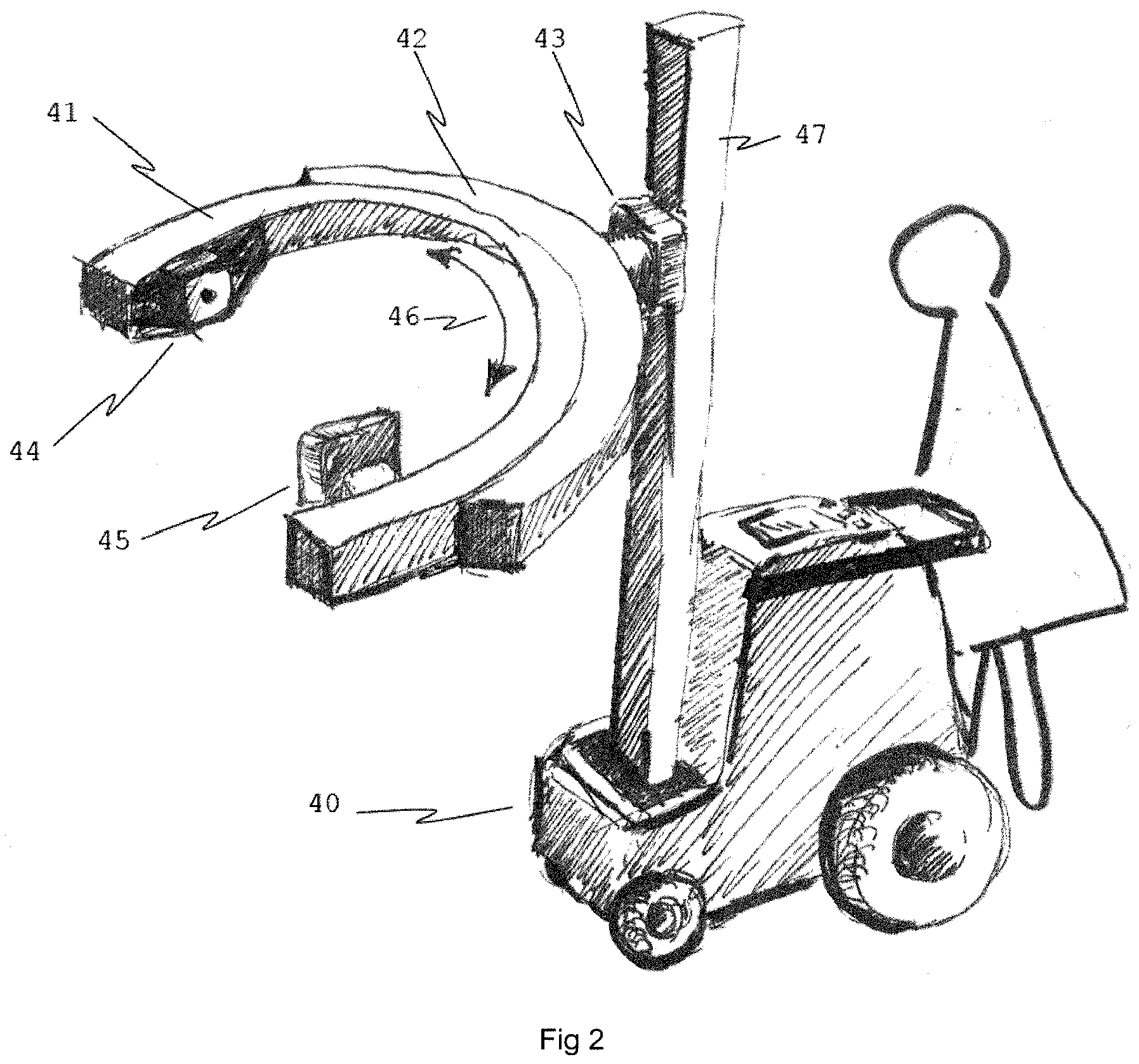 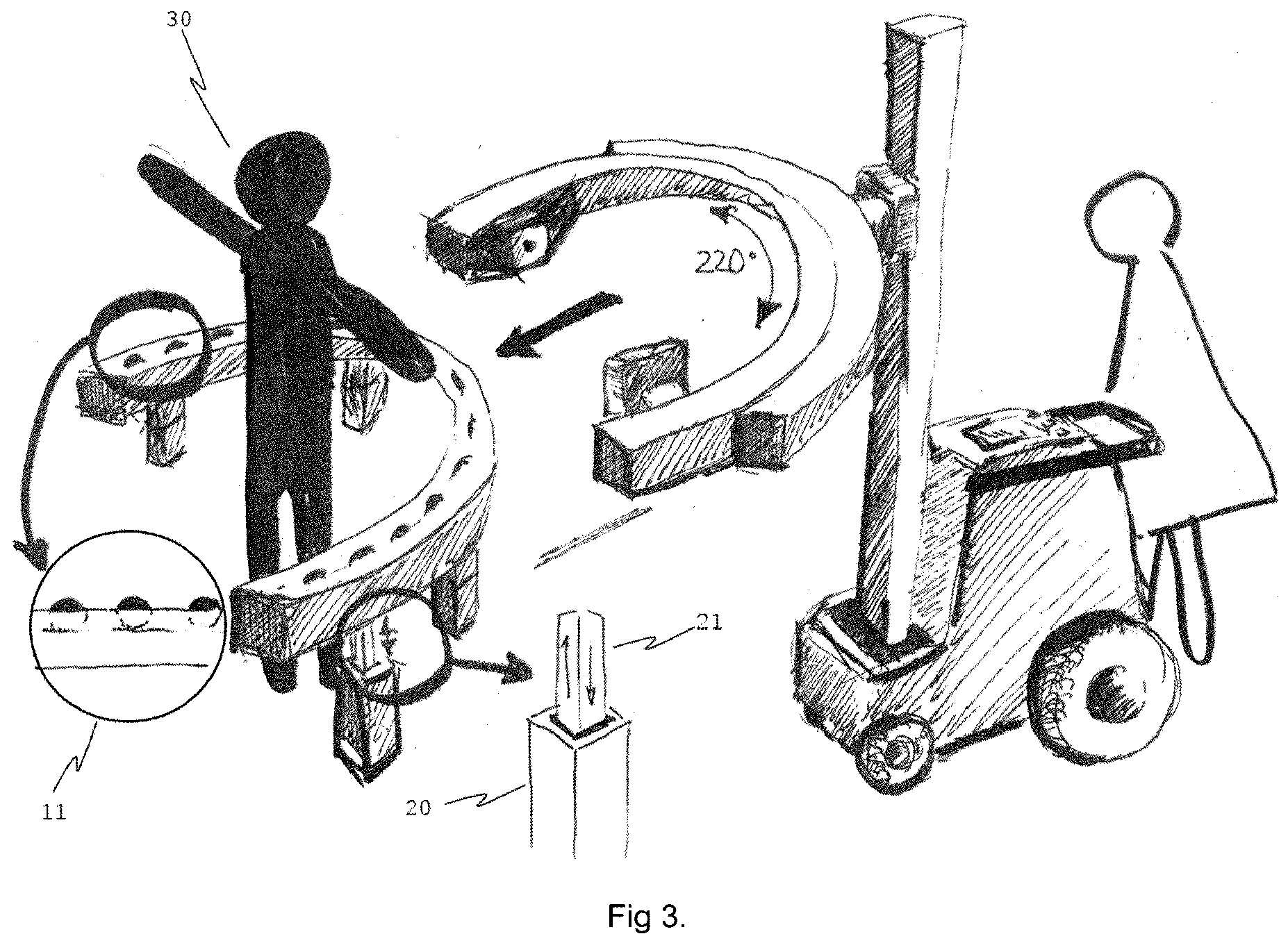 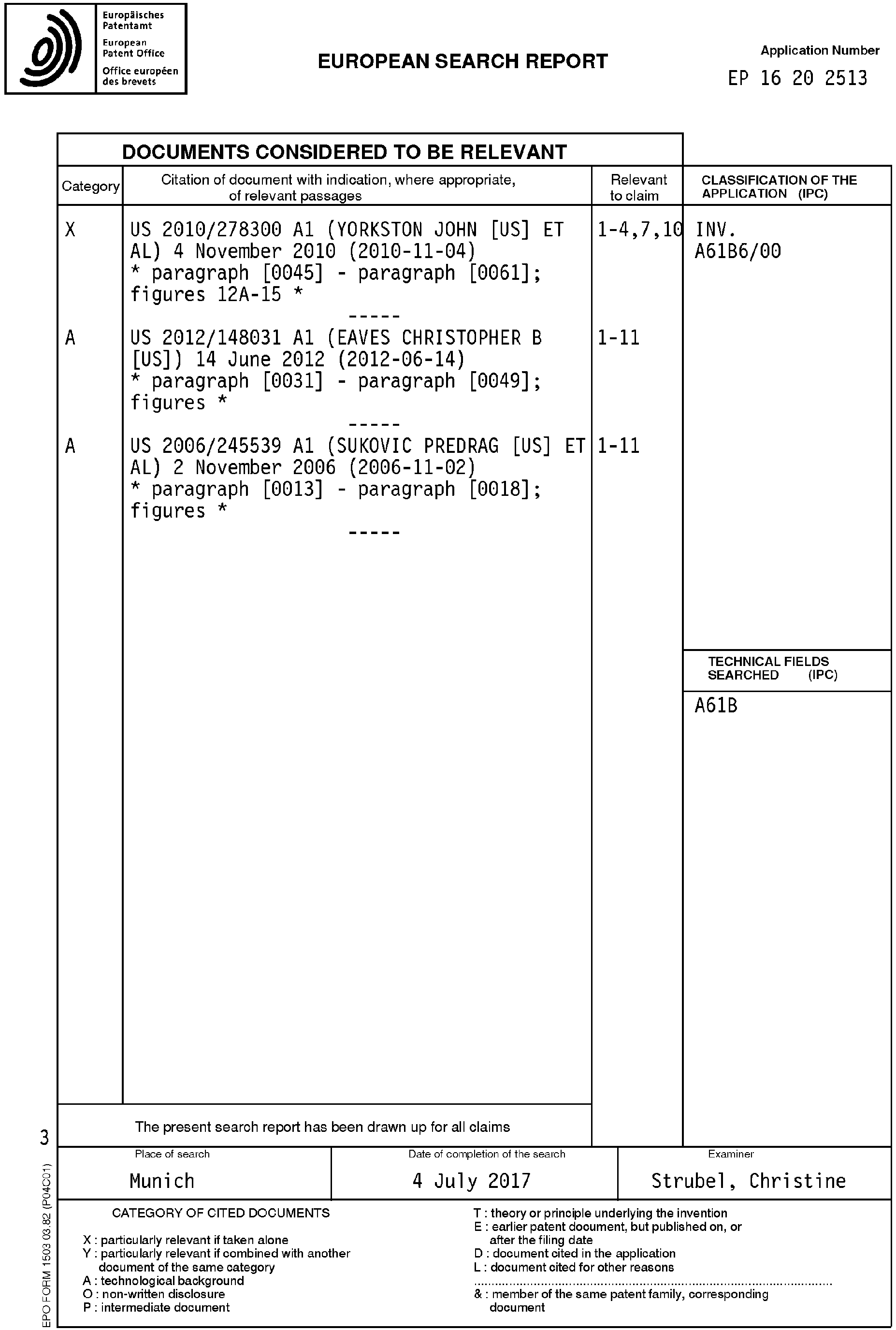 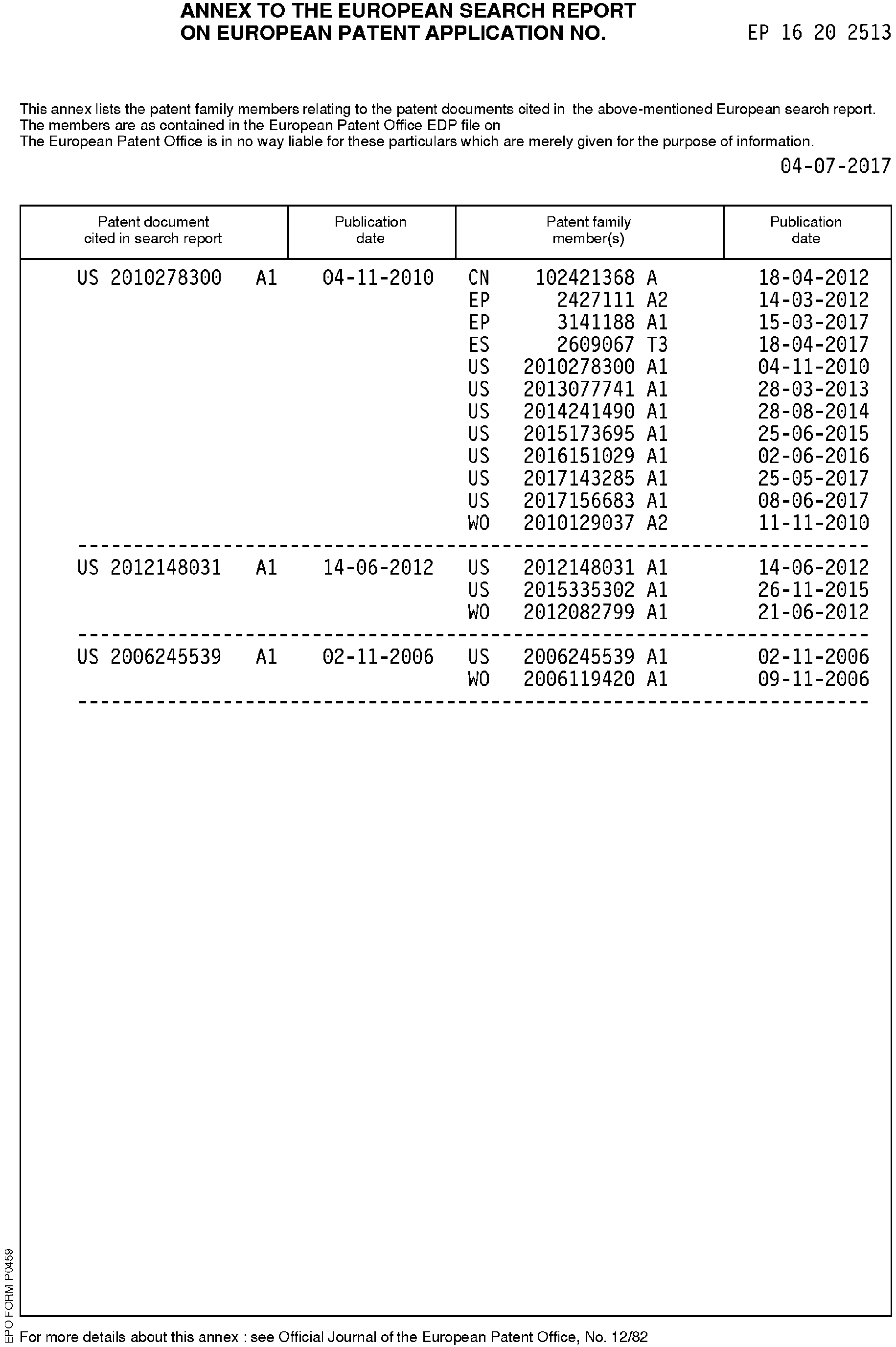