[0001] The present disclosure relates to tissue products, and more particularly, to products containing extracellular tissue matrices made from adipose tissue.
[0002] Various tissue-derived products are used to regenerate, repair, or otherwise treat diseased or damaged tissues and organs. Such products can include tissue grafts and/or processed tissues (e.g., acellular tissue matrices from skin, intestine, or other tissues, with or without cell seeding). Such products generally have properties determined by the tissue source (i.e., the tissue type and animal from which it originated) and the processing parameters used to produce the tissue products. Since tissue products are often used for surgical applications and/or as tissue replacements or for augmentation, the products should support tissue growth and regeneration and avoid excess inflammation, as desired for the selected implantation site. US2012/189588 and US2003/162707 disclose processed adipose tissue compositions. The present disclosure provides adipose tissue products that can provide for improved tissue growth, revascularization, and regeneration in various applications, while improving surgical handling and reducing inflammation.
[0003] The invention is defined in the claims. According to certain embodiments, methods for producing tissue products are provided. The methods include selecting an adipose-containing tissue; treating the tissue to remove substantially all cellular material from the tissue, and further processing the tissue to reduce the adipose content of the tissue. In addition, tissue products made by the disclosed processes are provided. The products can comprise a decellularized adipose extracellular tissue matrix and a reduced lipid content. The tissue product can be provided in a sheet format that is suitable for surgical use and/or for further manipulation to prepare a desired implant shape, or can be provided in any other desired shape.
[0004] Furthermore, methods of treatment are provided. The methods can comprise placing an adipose tissue product into a surgical site to replace, repair, regenerate, augment, and/or enhance a native tissue. The tissue product can be formed into a predetermined three-dimensional shape and implanted into the host tissue at the desired location.

Fig. 1 is a plot showing differential scanning calorimetry data indicating the percentage of collagen denaturation in tissue samples, prepared according to certain embodiments of the present disclosure, after incubation at different temperatures. Tissue samples were scanned from 2°C to 120°C at 4°C/min.

Fig. 2 shows Hematoxylin and eosin (H&E) staining of sections taken from adipose tissue products with different lipd content (63%, 45% and 72%, from left to right) three months after implantation in African green monkeys, according to certain embodiments of the present disclosure. Sections were prepared using tissues from the center of grafts, and the images are at 200X magnification.

Fig. 3 shows systemic antibody (IgG) titer in African green monkey serum over time following implantation of one of three adipose tissue products with different lipid content (63%, 45% and 72% on a dry mass basis, respectively), according to certain embodiments of the present disclosure.

Use of Tissue Products

[0035] The adipose tissue products described herein can be used to treat a variety of different anatomic sites. For example, the tissue products can be implanted to fill a void space in a native tissue (e.g., following injury or surgical removal of a bulk volume of native tissue, such as after surgical removal of a tumor). Similarly, the tissue products can be used as implants or in conjunction with polymeric implants for use in cosmetic procedures to augment or enhance a native tissue. For example, the tissue products of the present disclosure are produced from adipose-containing tissues. Accordingly, it is believed that the adipose tissue products will provide superior regenerative capabilities when implanted in certain tissue sites, as compared to materials produced from other tissue types. For example, the retained lipid components in the partially de-fatted tissue products are believed to promote the deposition and storage of lipids within and around the implanted product, while the ECM components of the implanted product provide a scaffold for the migration and proliferation of native cells within the implant, thereby allowing for the regeneration of more natural looking and/or feeling tissue around the implant site. The implanted tissue products can also promote revascularization. Accordingly, in certain embodiments, the tissue products disclosed herein can be implanted in tissue sites in a host human or other animal that predominantly or significantly comprise adipose tissue, and the implanted products can promote the repair, regeneration, treatment, augmentation, and/or enhancement of the host tissue.
[0036] In some embodiments, the tissue sites for implantation of an adipose tissue product can include a breast (e.g., for augmentation, enhancement, replacement of resected tissue, or placement around an implant). In addition, a site in any other adipose or soft tissue can be selected. For example, the tissue products may be used for reconstructive or cosmetic purposes in the face, neck, buttocks, abdomen, hips, thighs, and/or any other site comprising adipose or soft tissue where reconstruction or augmentation is desired using a tissue product having a structure and/or feel that approximates that of native adipose. In any of those sites, the tissue may be used to reduce or eliminate wrinkles, sagging, or undesired shapes.
[0037] When used as implants to repair, regenerate, treat, augment, and/or enhance adipose or other soft tissues, the tissue products disclosed herein can provide advantages over other implanted natural and synthetic products. For example, although some tissue implants allow for native cell ingrowth and tissue formation (e.g., implants from non-adipose tissue sources that comprise an extracellular matrix), those implants may induce the formation of fibrotic tissue that does not mimic normal texture and/or feel of adipose or other soft tissues, and may appear abnormal on radiologic imaging. Since the tissue products of the present disclosure are formed from adipose-containing tissues, they may avoid or reduce the extent of fibrotic tissue formation. Furthermore, since the tissue products retain some lipid components following partial lipid removal, it is believed that the implanted products promote the deposition of native adipose and are less likely to harden over time, thereby retaining the look and/or feel of native adipose tissue. In contrast, adipose tissue implants that lack substantially all lipid components (e.g., less than 20% of the adipose present prior to processing) may result in stiff implant materials that lack sufficient malleability for use as soft tissue fillers, and which may also harden further over time.
[0038] In addition, as discussed above, the tissue products disclosed herein can be provided in sheets or other desired three-dimensional shapes that retain structural integrity and provide for ease of surgical manipulation. The tissue products disclosed herein do not, in certain embodiments, require micronization, homogenization, or further processing (e.g., freeze drying and/or cross-linking) in order to provide for malleable yet structurally stable tissue implants that do not induce significant immune and/or inflammatory responses, in contrast to certain full-fat implants. Such full-fat implants may have a viscous consistency and cannot retain a desired shape, and may also have an increased possibility of inducing an immune and/or inflammatory response. In contrast, the partially de-fatted tissue products disclosed herein promote native lipid deposition while avoiding the inflammatory and immunologic responses that may be associated with implanted adipose tissues that have not been de-fatted.

[0039] The following examples serve to illustrate, and in no way limit, the present disclosure.

[0041] Layers of porcine adipose tissue at a depth of between 2.75 mm and 4.20 mm was obtained for processing. The lipid content of the adipose tissue samples was determined to be 85.9 ± 6.8% (mean ± SD, N = 8) on a dry mass basis. The loose fat on the tissue surface was scraped manually, and the tissue was preincubated for 22 hours with gentle agitation in 35% maltodextrin solution containing 0.24g/L cefoxitin, 0.12g/L licomycin, 0.03g/L vancomycin and 0.1g/L polymyxin B sulfate. The scrapping and incubation reduced the tissue lipid content to 74.8 ± 12.6% (mean ± SD, N = 7) on a dry mass basis. The tissue was stored at -80°C until used.
[0042] For further processing, frozen tissue material was thawed at 4°C over a period of 65 hours. After washing twice with 20 mM HEPES buffer (pH 8.0) to remove the maltodextrin solution, the tissue was decellularized for ∼20 hours in 1% (w/v) sodium deoxycholate dissolved in 10 mM HEPES buffer (pH 8.1) containing 0.3% (w/v) Triton X100, with agitation. Decellularized tissue was rinsed with 10 mM HEPES buffer (pH 7.2) containing 10 mM MgCl2 and 10 mM CaCl2. DNAse and alpha galactosidase were then added at 4 mg/L and 2 mg/L, respectively for treatment for 20 hours. The resultant tissue matrix was washed three times in HEPES buffer (pH 7.2) over 8 hours to remove residual enzymes. The processing steps resulted in a further reduction of lipid content. Processed tissue was stored in 4 mM citrate-phosphate buffer (pH 6.5) containing 12% (w/v) glycerol, and terminally sterilized by 26 kGy gamma irradiation.
[0043] The average thickness of sterilized adipose tissue matrix sheets was 1.0 ± 0.2 mm, which is thinner than the starting material due to partial lipid removal during processing. The soft adipose matrix had a moderate tensile strength of 2.7 ± 1.6 MPa (mean ± SD, N = 48). Residual DNA content was 0.073 ± 0.041 µg/g (mean ± SD, N = 10) on a dry mass basis, indicating the removal of greater than 99.5% of the DNA in the tissue. Immunostaining with lectin was negative for the presence of alpha-gal antigen. Lipid content, non-fat tissue matrix density, and water content of the sterilized adipose tissue matrices were measured to be 37.0 ± 6.2%, 11.8 ± 2.5%, and 51.3 ± 3.8% (mean ± SD, n = 5), respectively.

[0046] Ultrasonic treatment generates heat and could lead to an increase in temperature of decellularization solution. To avoid denaturation of adipose tissue material, the solution temperature was controlled to keep it below a threshold above which collagen denaturation may occur. To determine the appropriate temperature, tissue samples were incubated for 60 minutes at different temperatures between 44°C and 60°C. After incubation, the extent of collagen denaturation was measured with differential scanning calorimeter. During the calorimetric test, tissue samples were scanned from 2°C to 120°C at 4°C/min. Fig. 1. No denaturation was observed for tissues incubated at temperatures below 50°C. Thus, the tissue processing temperature can be raised above 40°C to accelerate the decelluarization process.

[0047] The in vivo performance of processed adipose tissue grafts with high lipid content of between about 45% and 75% on a dry mass basis was evaluated using a primate functional abdominal wall repair model (African green monkey). Three such grafts with different lipid content (45%, 63%, and 72%) were implanted for three months, and blood samples were taken at 0, 1, 2, 4, 6, 8, and 12 weeks after implantation. There was no herniation in any of the animals, and all three grafts integrated well with surrounding animal tissues. Histological analysis of explanted materials demonstrated host cell repopulation and re-vascularization. Fig. 2 shows the H&E stained sections of the three grafts after explantation at 3 months. No inflammation was observed in the graft with 45% lipid content (on a dry weight basis). Significant inflammation was observed only in the graft with about 70% lipid content (on a dry weight basis). The tests of blood samples taken after implantation showed that the quantity of IgG antibodies was low with a transient increase (<128 folds) following surgery, indicating that grafts induced insignificant immunological reactions (Fig. 3).
[0048] The in vivo primate evaluation demonstrated that tissue grafts with high lipid content were able to integrate into host tissues and to support cell repopulation and re-vascularization. As lipid content increased (> about 70%), however, inflammation became more severe. The primates did not have significant foreign body reactions to the grafts.
[0049] The preceding examples are intended to illustrate and in no way limit the present disclosure. Other embodiments of the disclosed devices and methods will be apparent to those skilled in the art from consideration of the specification and practice of the devices and methods disclosed herein.

treating the sheet of tissue to remove substantially all cellular material from the tissue; and

processing the sheet of tissue to partially remove lipid components such that the tissue product contains between 30% and 50% lipid content as a percentage of the overall tissue product by mass. 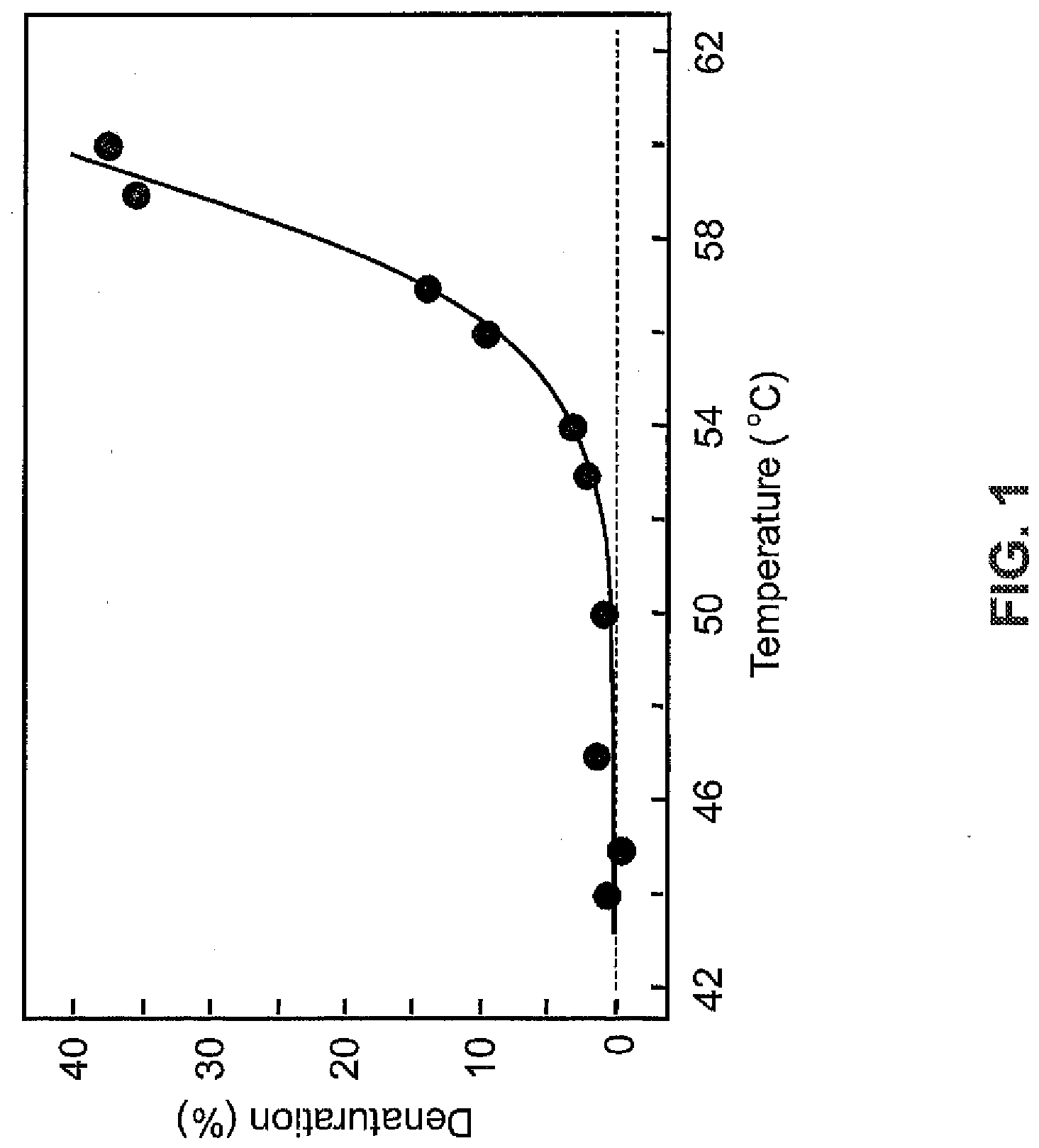 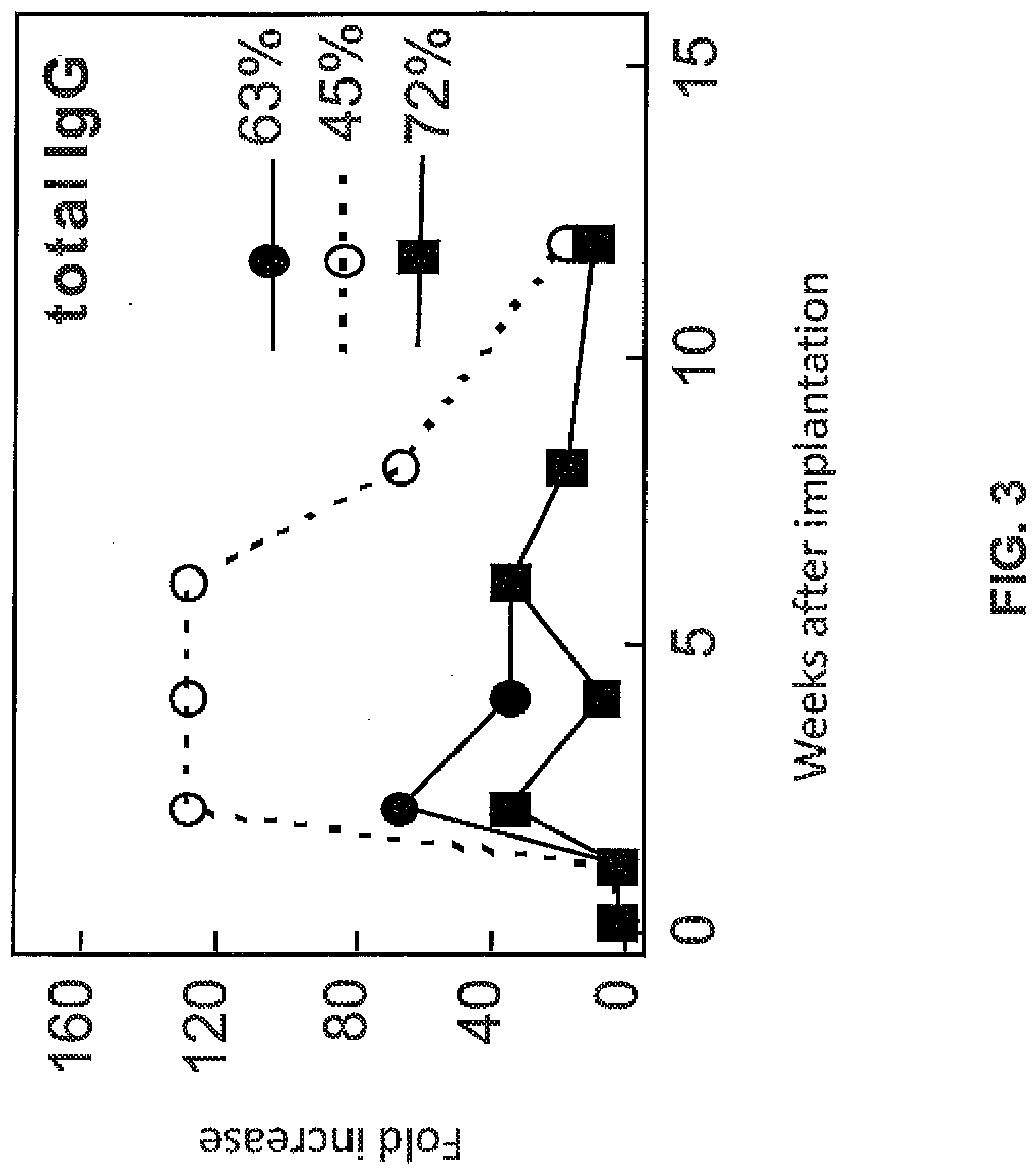