[0002] In general, clock signals can be seen as repetitions of mostly rectangular pulses with a certain fundamental frequency. Spectra of such pulses show harmonics at integer multiples of the fundamental frequency, i.e. narrowband spectral components (spurs) with different amplitudes. A reference clock of a PLL can create unwanted spurs in the Local Oscillator (LO) signal of a Radio Frequency (RF) transceiver due to crosstalk effects. This may owe to the fact that a strong switching activity at reference clock rate may have a lot of harmonic content. Therefore harmonics of the reference clock falling into a band of interest may create unwanted spurs. This may be especially true if a low reference clock frequency is chosen because the harmonics of this clock signal create a dense grid of these spurs, making it difficult to find a clock frequency, for which no harmonics fall into a band of interest. In contrast, a low reference clock frequency may sometimes be desired, especially for PLLs with low power consumption. Therefore, a compromise between the two effects may be found.
[0003] EP 2 575 260 (D1) discloses a device for providing a spread frequency clock signal. D1 discloses that a programmable clock divider generates the spread frequency clock signal from the first clock signal, and a control unit selects a division factor of the programmable clock divider based on the first output value of the shift register during each clock cycle of the spread frequency clock signal. D1 discloses that the spread frequency clock signal is generated from the first clock signal by spreading rising edges and falling edges.
[0004] US 2014/0197875 (D2) discloses a method for signal interference mitigation. D2 discloses that the signal interference mitigation circuit includes a clock divider circuit and a control circuit. D2 discloses that the clock divider circuit is configured to generate the first clock signal based on a second clock signal and a division factor pattern. The control circuit is configured to determine the division factor pattern. The division factor pattern comprises a plurality of division factors selected randomly based on a plurality of random numbers. The division factor pattern is determined in a manner so as to control a throughput frequency associated with the signal interference mitigation circuit.

Brief description of the Figures

[0005] Some examples of apparatuses, methods and/or computer programs will be described in the following by way of example only, and with reference to the accompanying figures, in which

Fig. 1 shows an example of a clock generator;

Fig. 2 illustrates another example of a clock generator configured to generate an irregular clock signal at a predefined average clock rate;

Fig. 4 illustrates clock switching spectra in a comparison between a regular clock (top) and a clock signal of an example (bottom);

Fig. 5 illustrates clock switching spectra in a comparison between a regular clock (top) and a clock signal of another example (bottom);

Fig. 6 depicts a block diagram of an example PLL with an irregular reference clock;

Fig. 10 depicts a block diagram of another example of a PLL;

Fig. 11 illustrates a block diagram of an example of a method for generating an irregular clock signal; and

Fig. 12 shows a network scenario of an example.

[0041] But the irregular clock has a varying period (frequency). The instantaneous period is given by the time difference TREF,irr between two consecutive clock edges, which is available from the delta signal:

means (14) for providing a reference signal;

means (18) for generating random numbers at a predefined distribution;

means (20) for determining a difference between at least two subsequently generated random numbers; and

means (16) for dividing the reference signal to generate the clock signal based on the difference between the at least two subsequently generated random numbers;

wherein a time difference between a clock cycle and a subsequent clock cycle of the clock signal is irregular,

2. The system of claim 1, wherein a clock frequency of the reference signal is an integer multiple of the predefined average clock rate.

3. The system of one of the claims 1 or 2, wherein the means (16) for dividing is configured for dividing the reference signal based on a varying divider ratio.

4. The system of claim 3, wherein an average varying divider ratio defines a ratio between the reference signal and the predefined average clock rate.

5. The system of claim 1, wherein the predefined distribution is a uniform distribution and wherein the means (18) is configured for generating uniformly distributed random integer numbers between 0 and an N-1.

6. A phase locked loop (50) apparatus comprising the system of one of the claims 1 to 5.

9. A radio frequency transceiver apparatus (100) comprising an apparatus (50) according to one of the claims 6 to 8.

10. A method for providing a clock signal, the method comprising:

determining a difference between at least two subsequently generated random numbers; and

11. A mobile terminal comprising a radio transceiver (100) of claim 9. 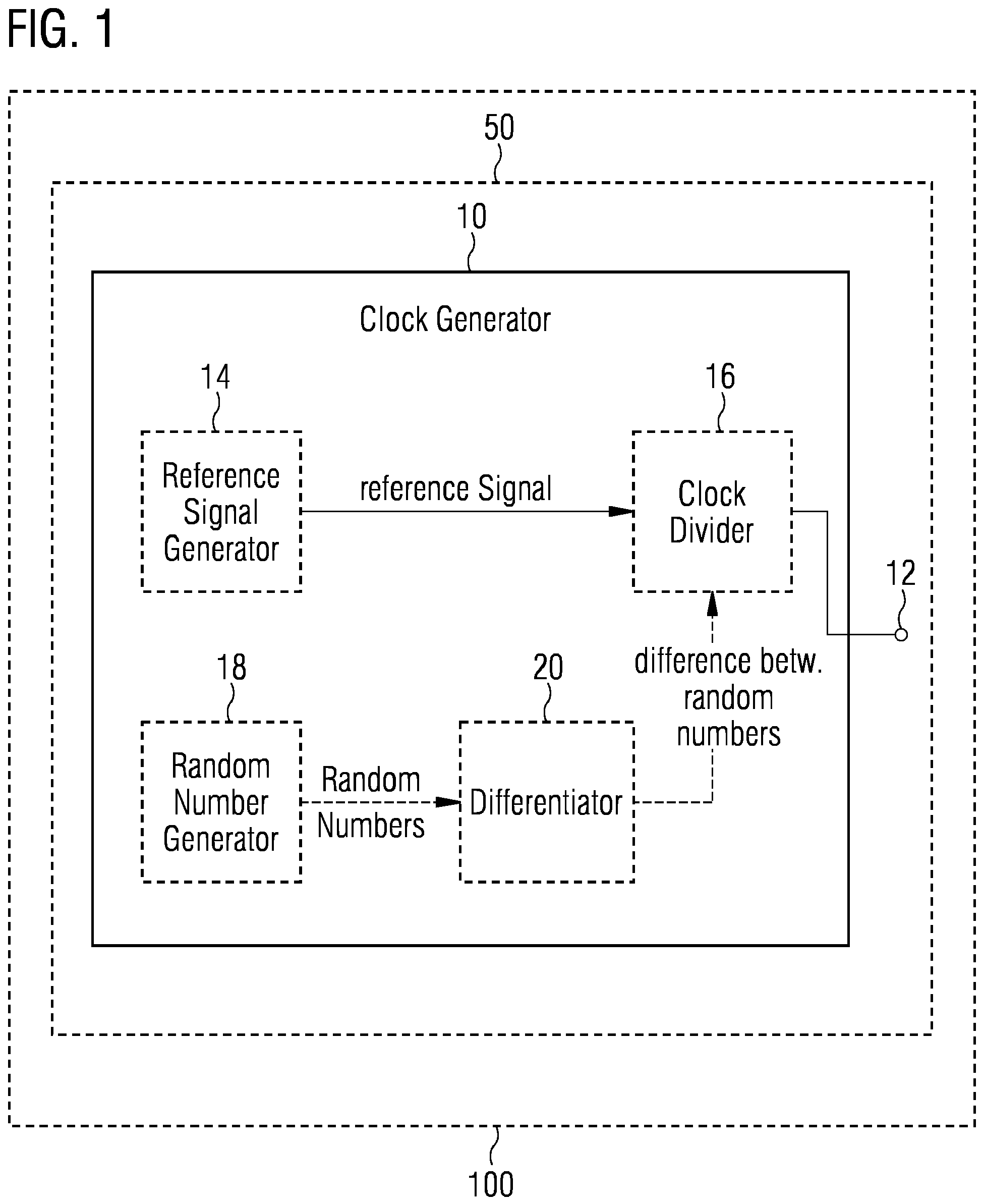 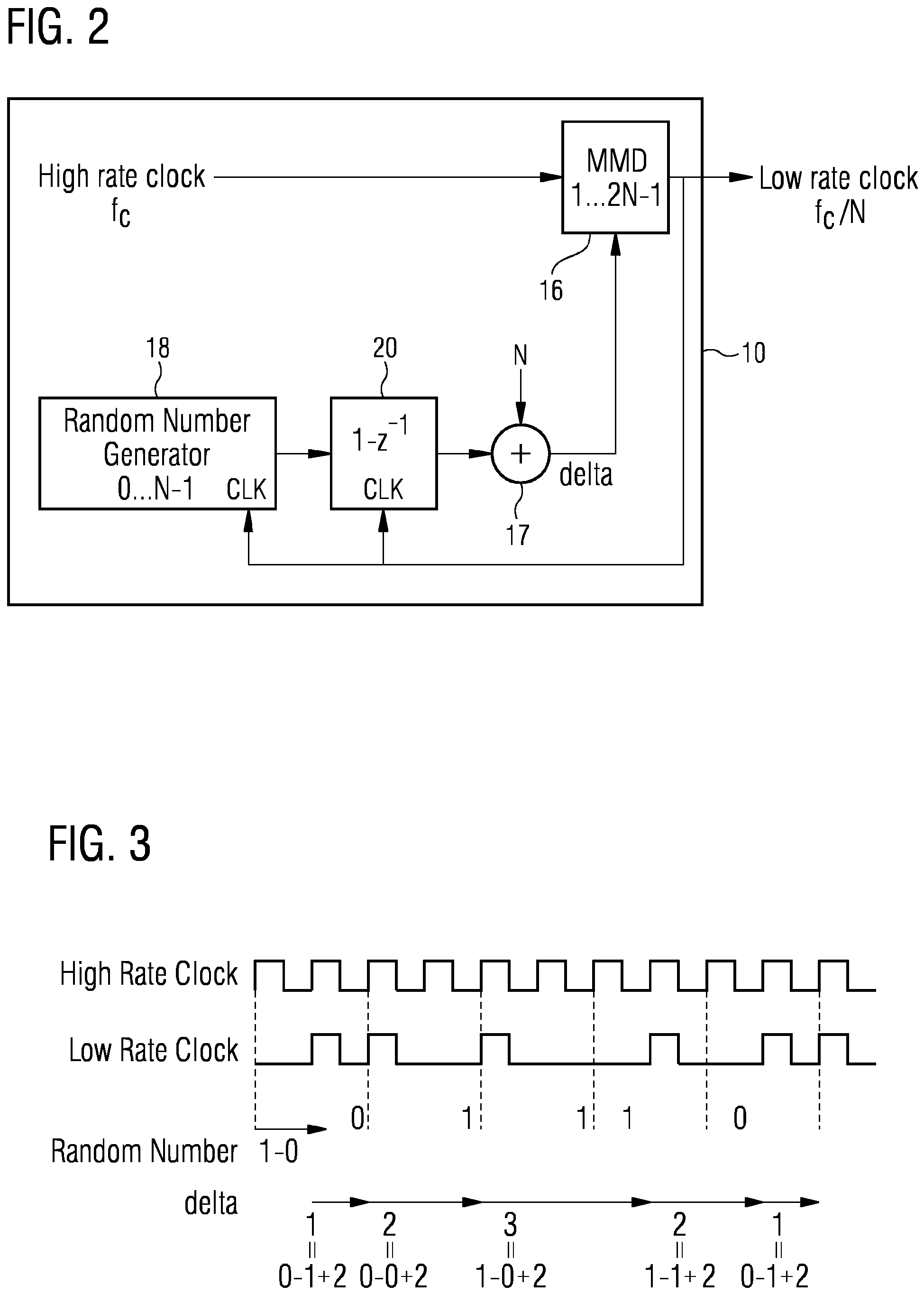 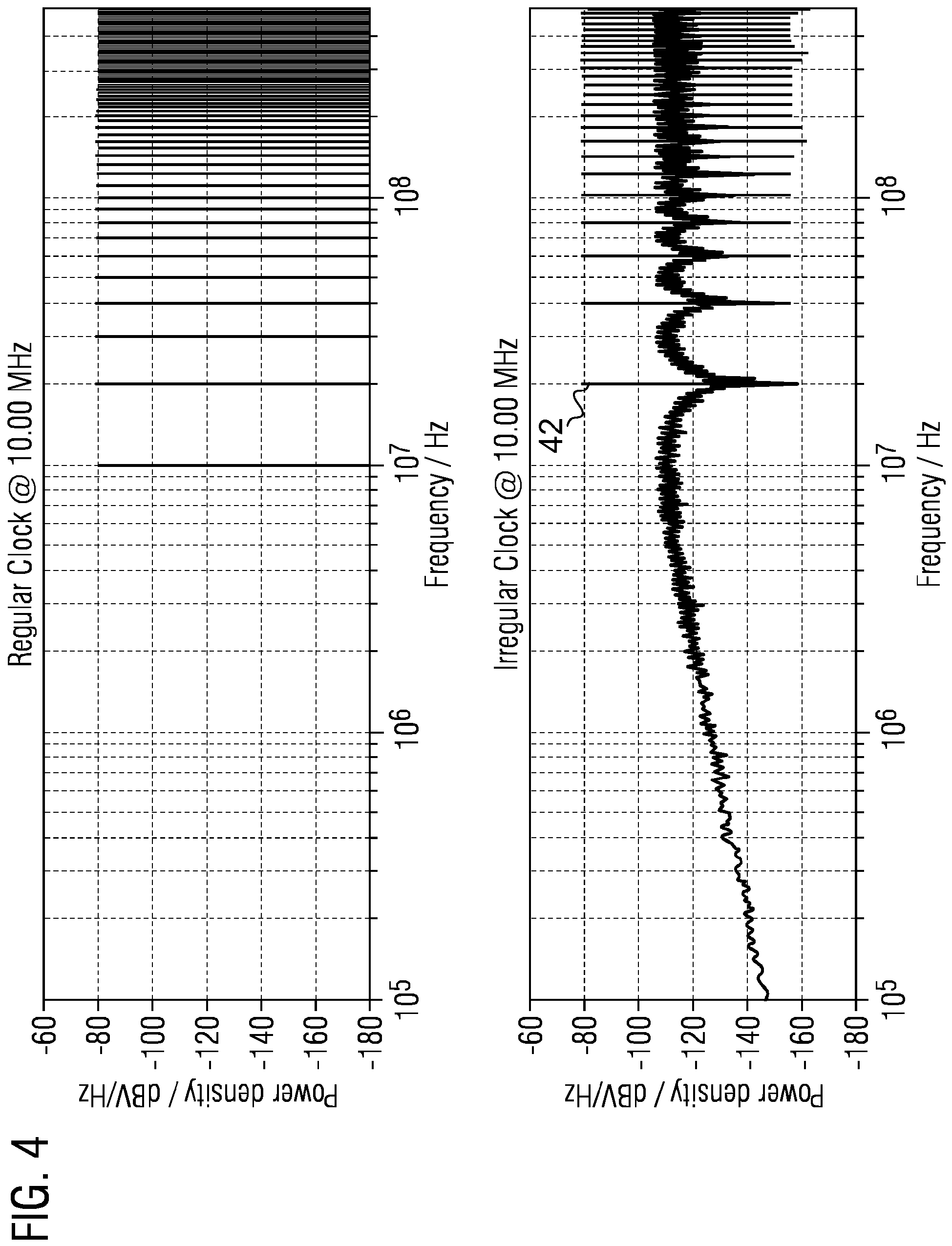 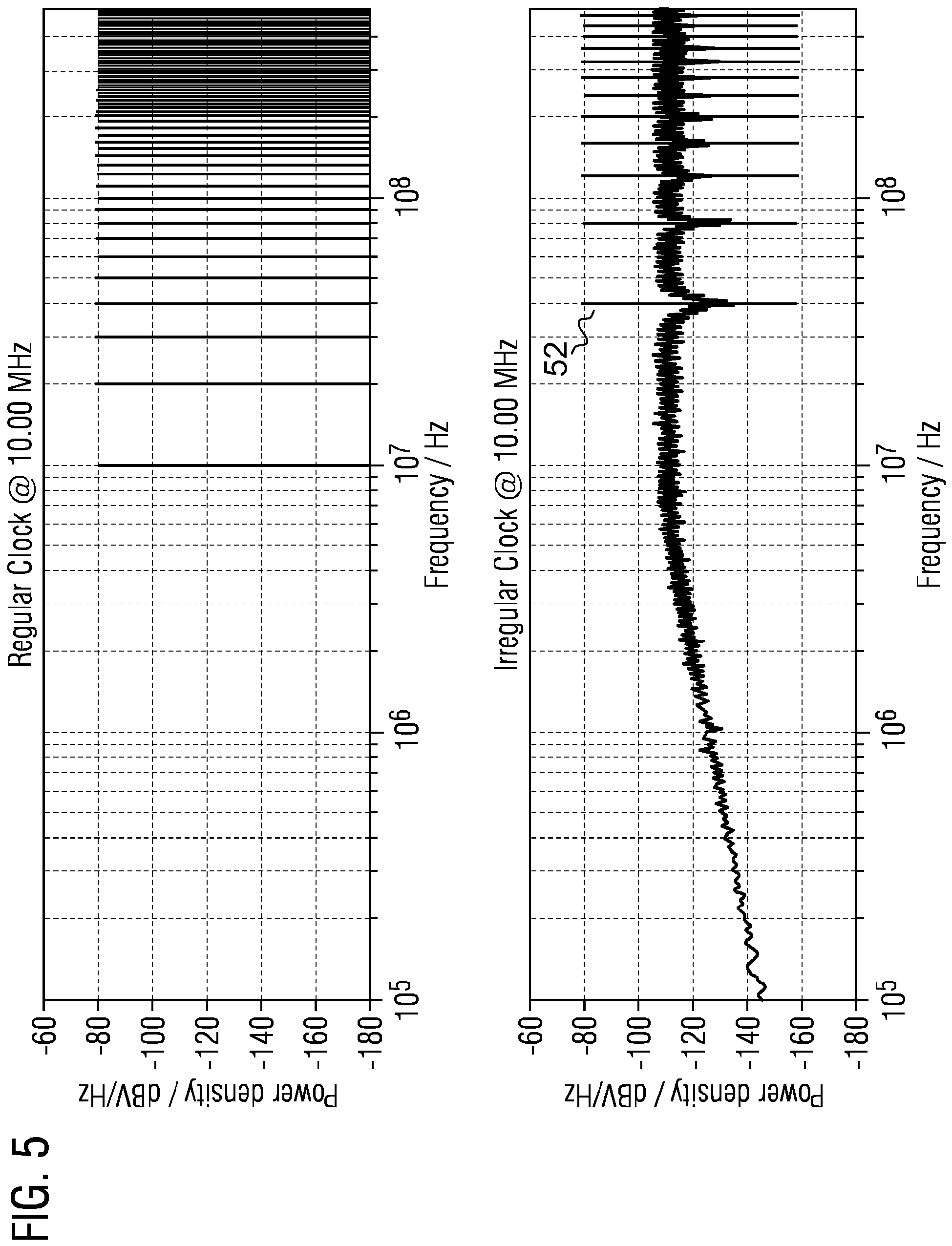 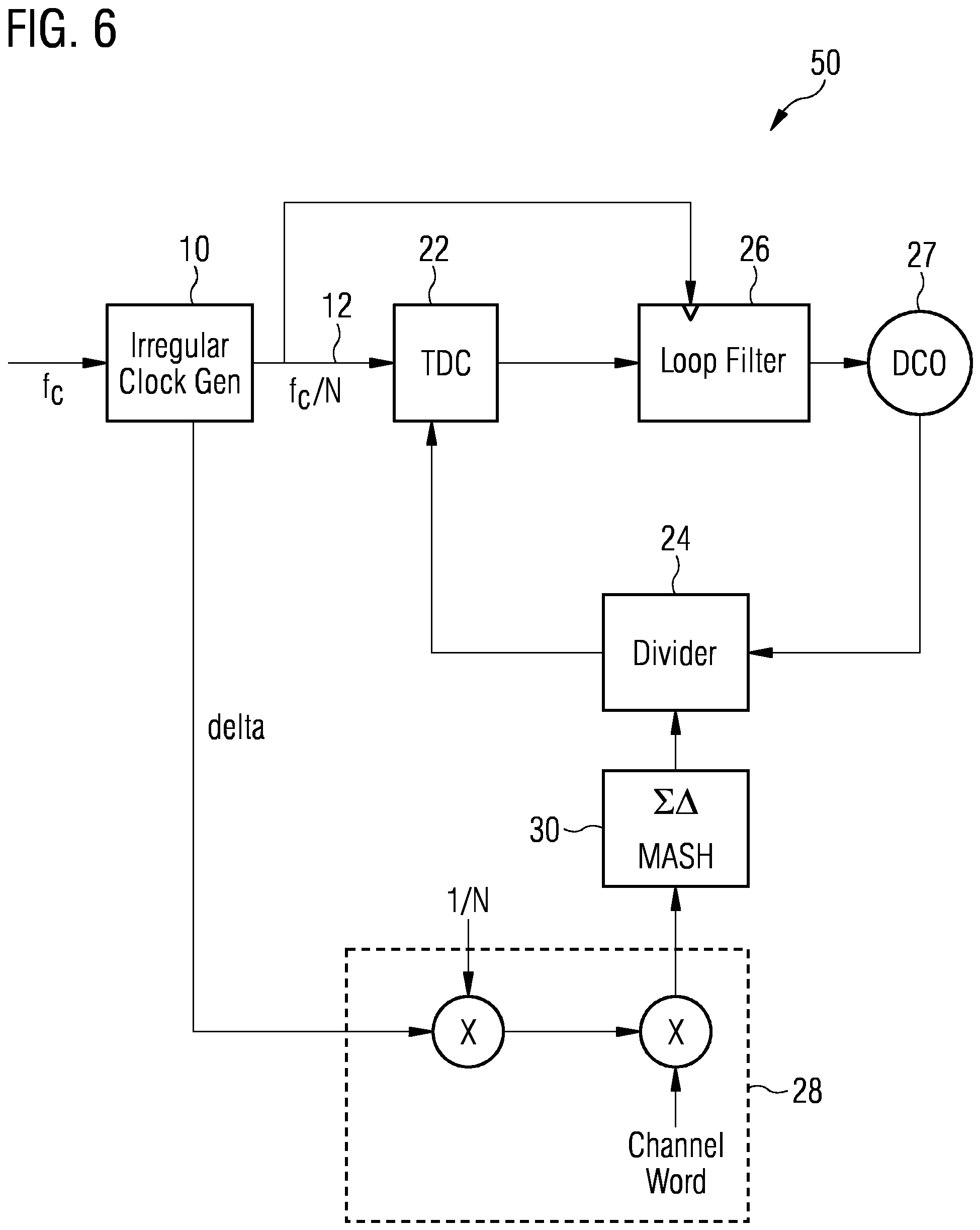 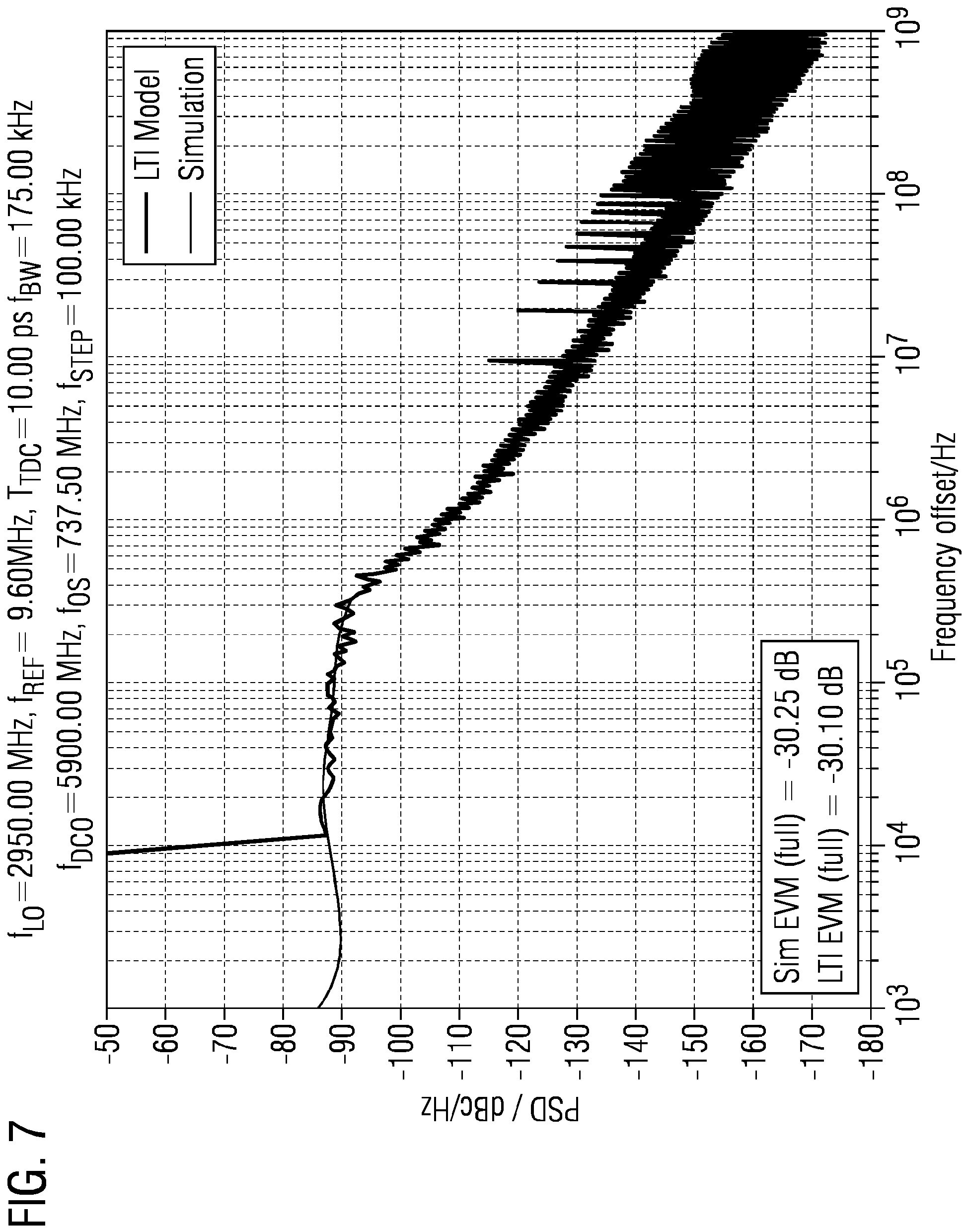 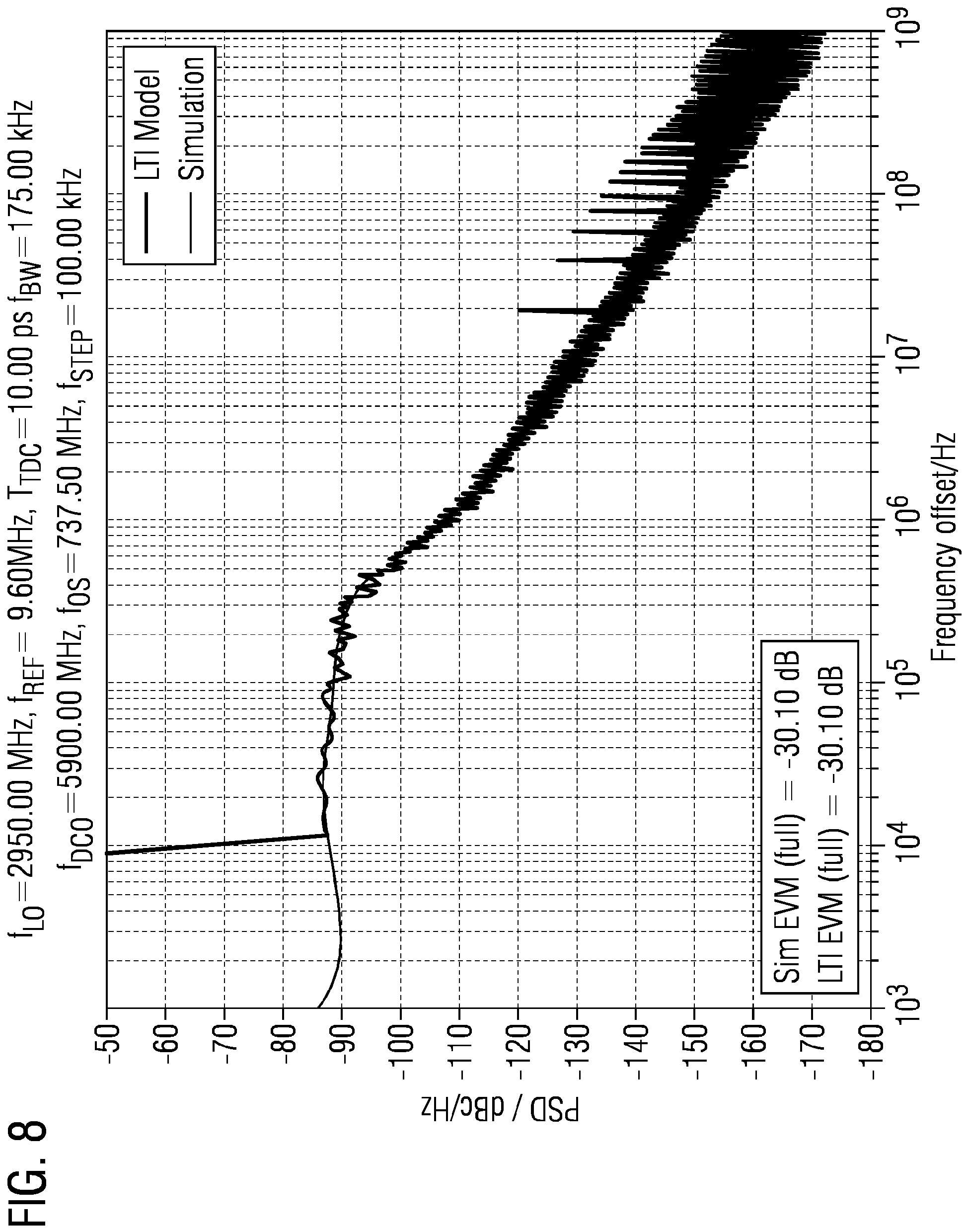 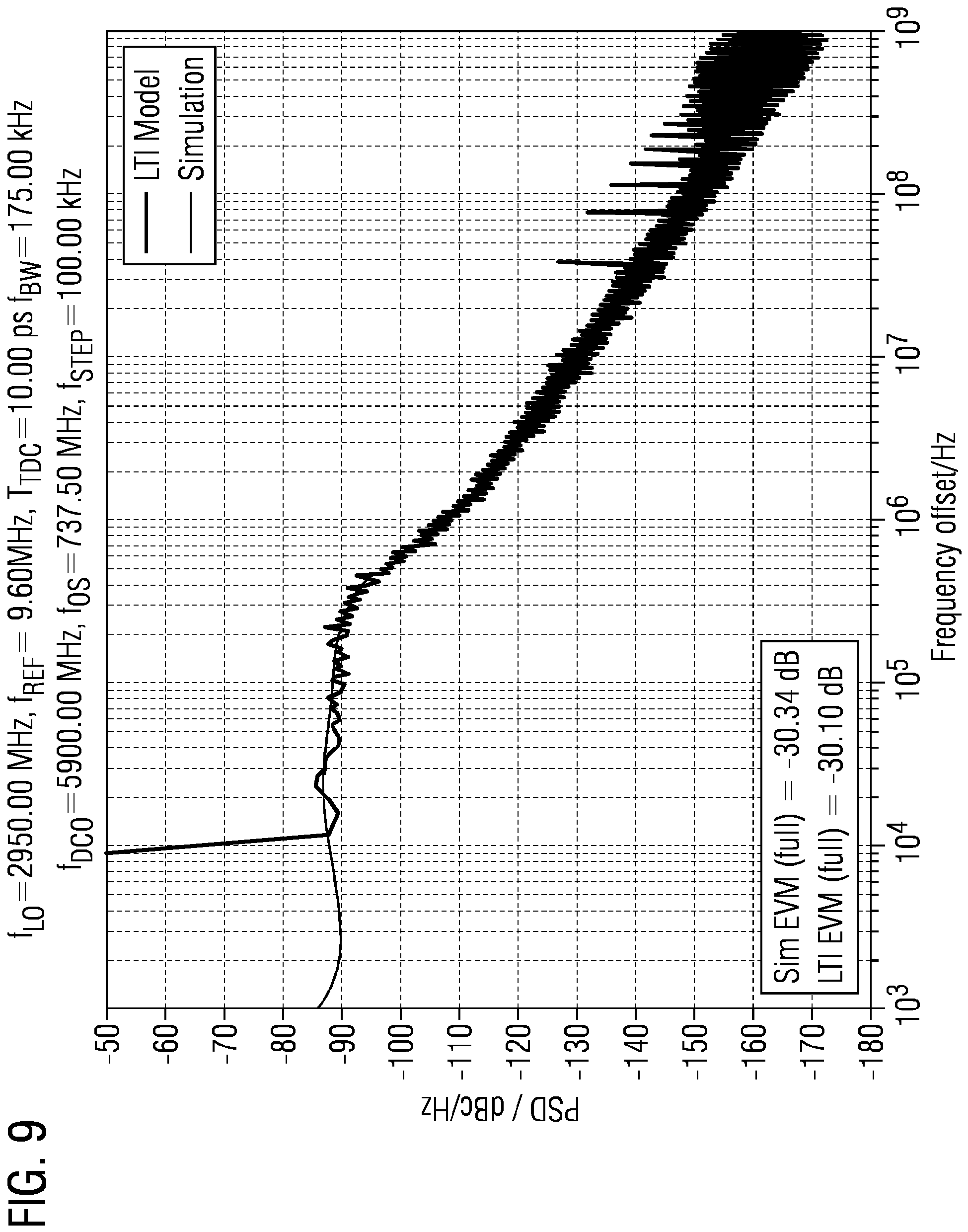 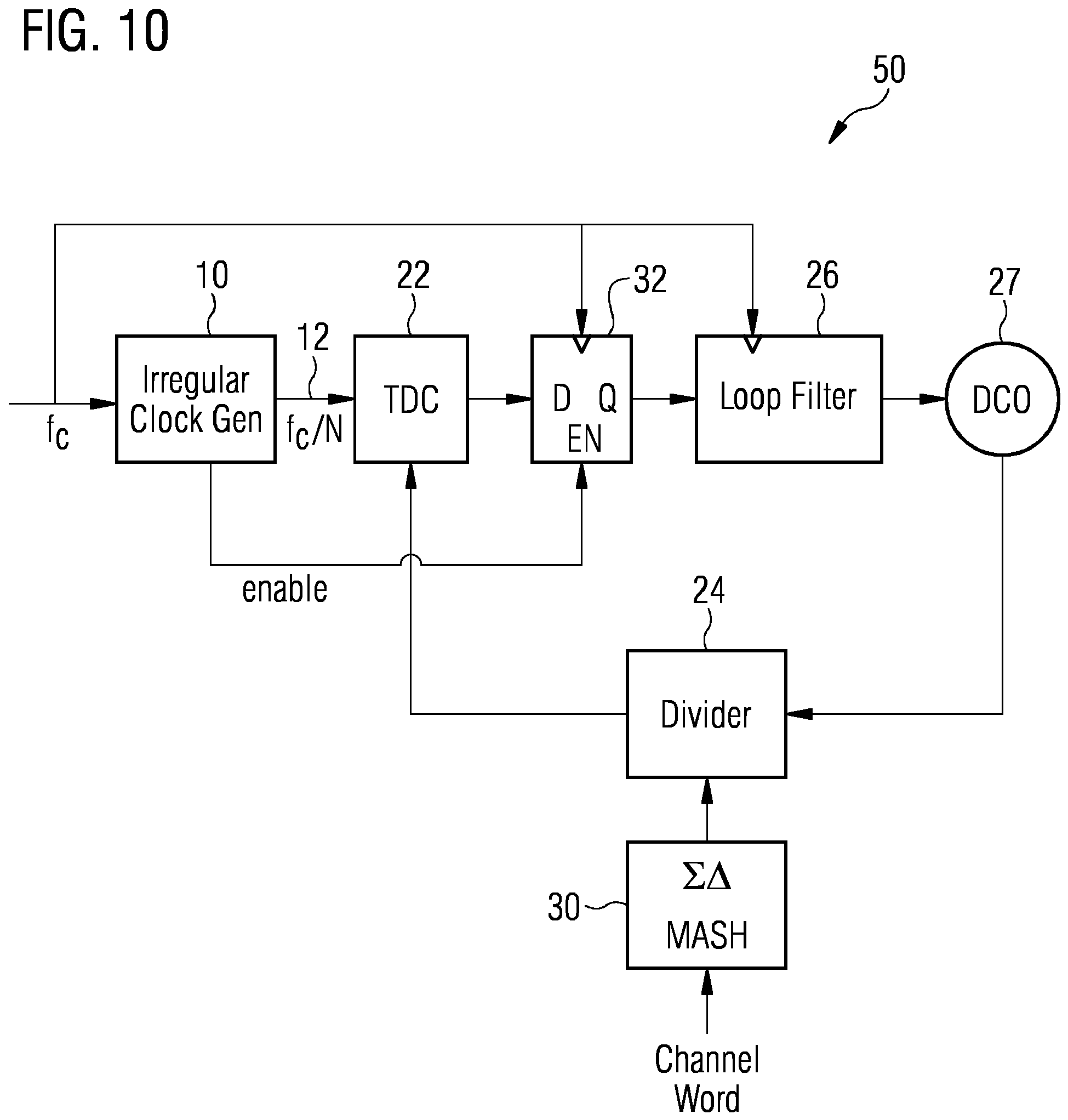 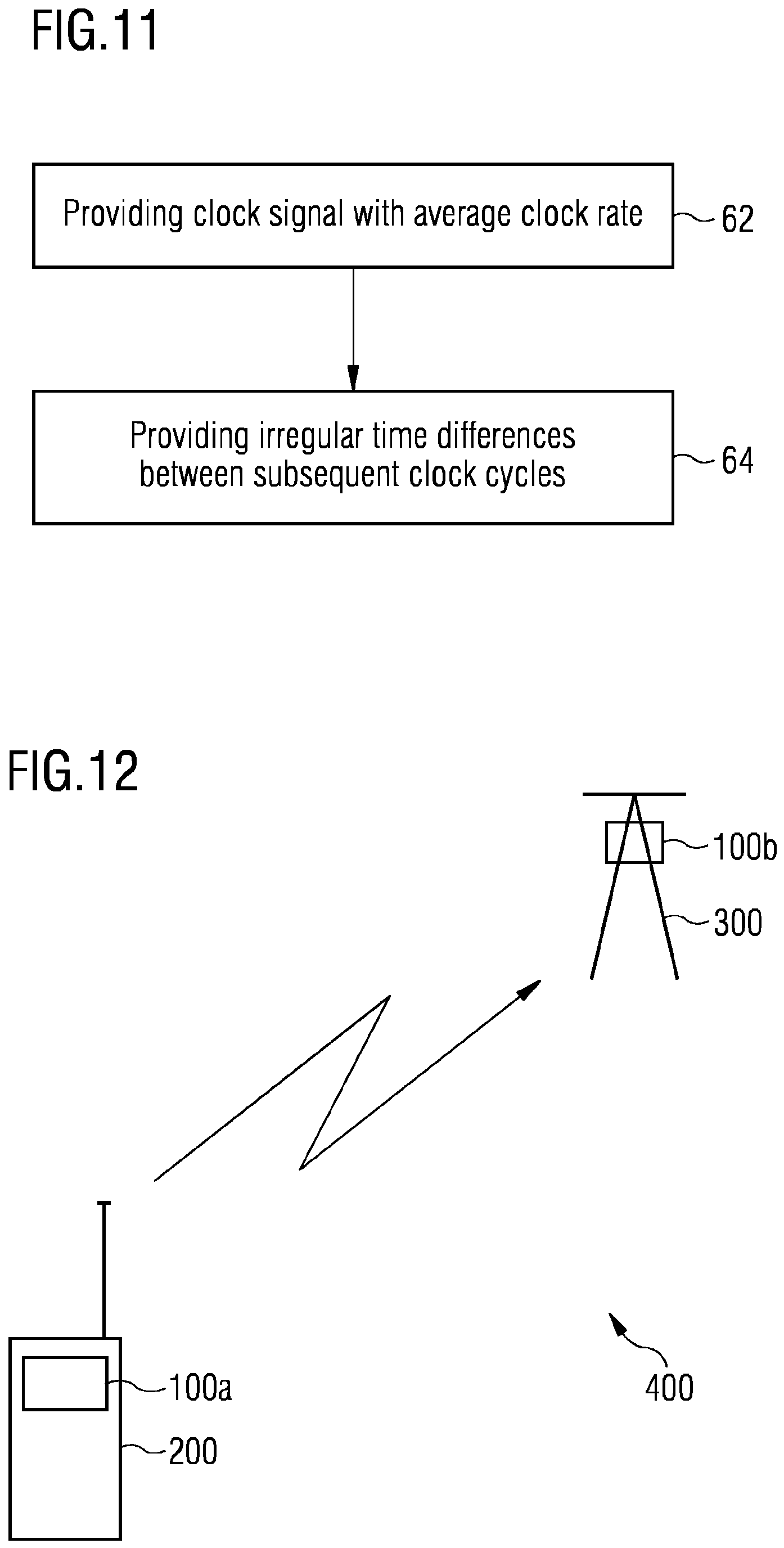