[0001] The present invention relates to blood collection systems in general, and in particular to a mixer for a blood bag in which blood is collected from a donor.

[0002] The task of taking blood from a donor requires many manual operations on the part of the person taking the blood. The blood collecting bags which are normally used, and also the hose connected to the bags and intended to be fitted to a cannula are prefilled with an anticoagulant.
[0003] In order to ascertain adequate mixing of blood and antigoagulant there are provided mixers provided with so called cradles in which the blood bag is placed.
[0004] Various mixers of this kind are known to the art. For instance, mixers are known which include a bag-carrying surface which is caused to rock forwards and backwards with the aid of a crank device which rotates about an axle which extends perpendicularly to the bag-carrying surface. It is also known to provide such mixer with a weight-measuring device which functions to measure the amount of blood that has flowed into the bag. It is also known to provide such mixers with means which function to produce an alarm signal when blood flows too quickly or too slowly into the bag.
[0005] Such a product is described in the granted US patent 5,147,330. It relates to a mixer (in the patent the entire device is referred to as a cradle) of the kind which includes a bag-carrying surface which is intended to be rocked reciprocatingly about an axle which extends perpendicularly to said surface, by means of a crank device or the like, said mixer being provided with a weight measuring device which functions to measure the quantity of blood that has flown into the blood bag. The mixer is also provided with a clamping device which functions to squeeze said hose so as to prevent blood from flowing therein, said clamping device being electromagnetically operable, and wherein the mixer is provided with a control circuit which functions to at least control said clamping device.
[0006] US 2012/010553 (A1) (Carlson et al) a blood collection system that exhibits features such as a support structure, a tray (describe as a "scale", but functions as a tray for a bag), a pump inherently disclosed since there must be some kind of pump in order to extract blood from the donor and a tilting mechanism ("blood agitating system").

[0010] The detailed description given hereinafter is to be read with reference to the accompanying drawings which are given by way of illustration only, and thus not to be considered limiting on the present invention, and wherein

Fig. 1 illustrates a prior art mixer 1;

Fig. 3 is a schematic illustration of a complete blood collecting system including a mixer; and

a pump (20) is provided on the support structure and configured to draw blood from the donor to a blood collecting bag through said blood tube (14), and in that

the pump (20) is configured to exert a kneading action on the blood tube (14) by means of at least two kneading elements arranged to alternatingly displace the contents of the tube in the direction towards the bag, over one segment of the tube each, thereby preventing back flow inside the tube, in that

information recorded by the sensors is stored in a suitable format, preferably as text files. 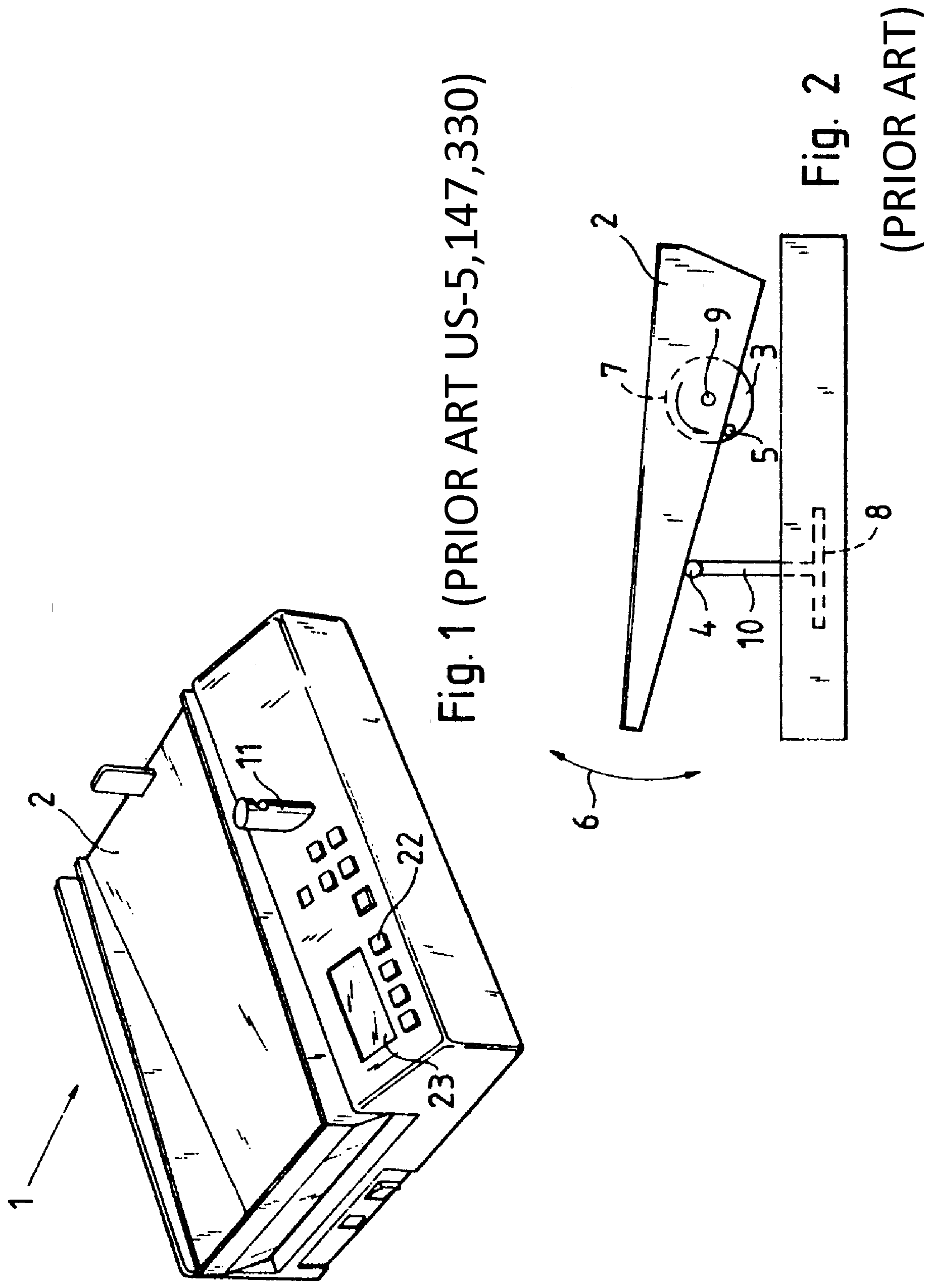 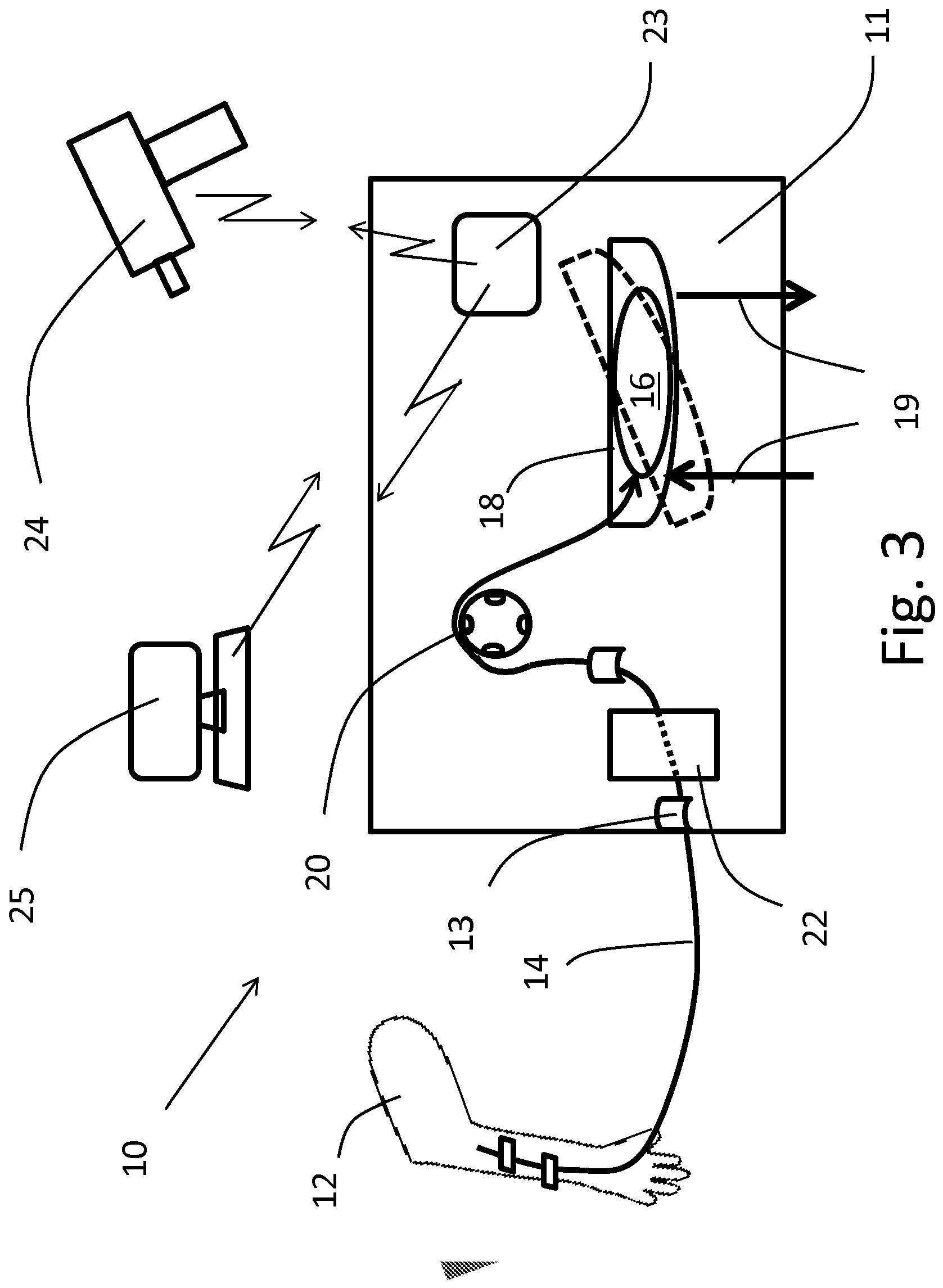 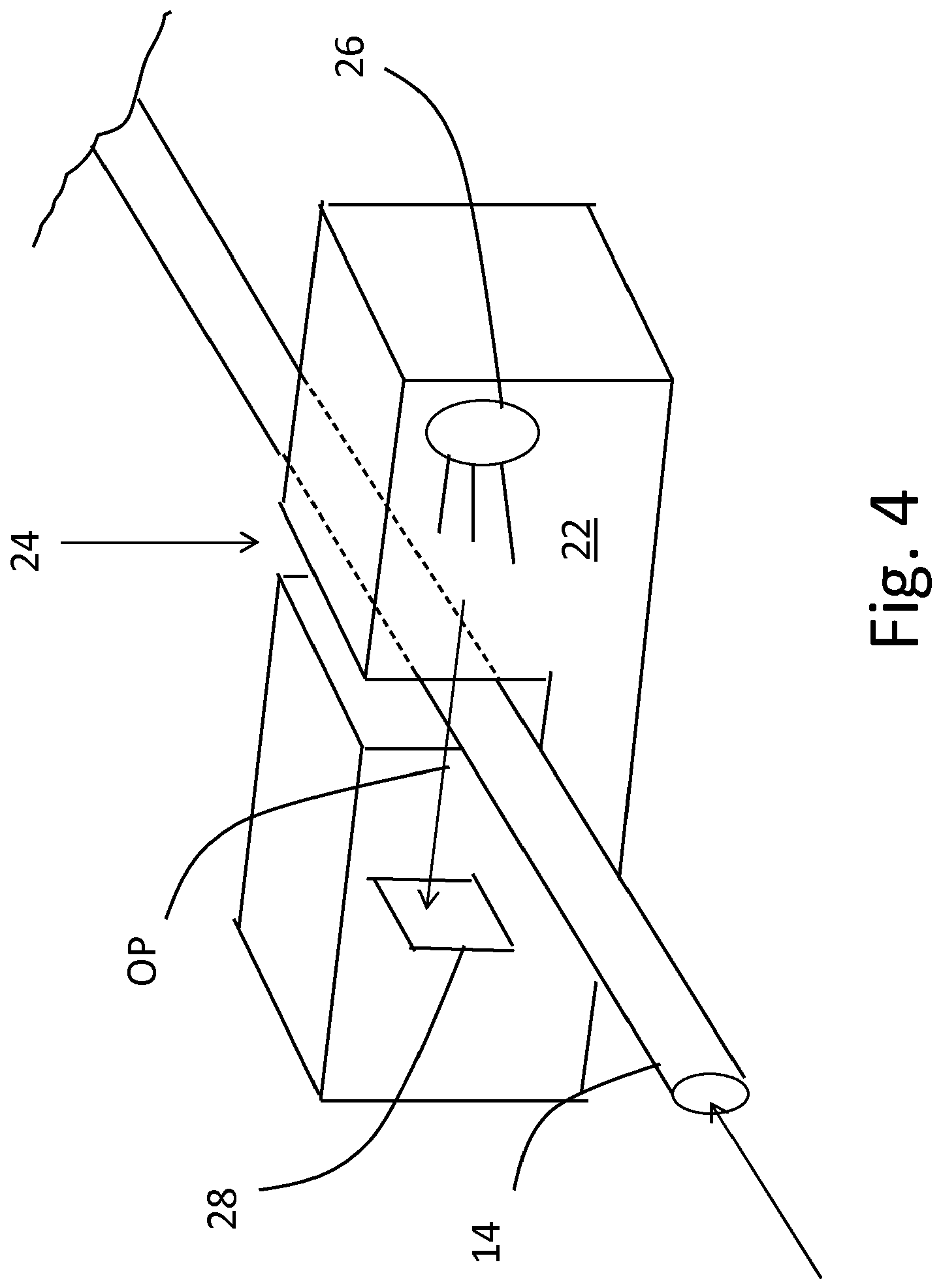