[0001] The application relates generally to a tree frame and grate system within primarily impervious surface areas such as sidewalks, street plantings, plazas, parking lots and the like. The design of this system and method would allow the tree to capture rainwater and surface runoff from adjoining impervious surfaces.

BRIEF SUM MARY OF THE INVENTION

[0021] The present invention is directed to a tree frame and grate system as defined in claim 1. The system is designed to encourage to collection and retention of rainwater, particularly in an arid environment, so as to provide continuous irrigation of vegetation whilst providing easy installation and attachment of electric devices. The system is also designed to maximize the amount of water available to vegetation in a primarily paved environment. The system is comprised of a pre-formed supporting frame to contain an engineered growing media and plant material which may extend beyond the exterior of the supporting frame.
[0022] Another embodiment of the invention is directed to an engineered media formulated to promote healthy growth of the plant material and resist compaction from overlying pavement.
[0023] Also discloses but not claimed is a method for extending the life-span of vegetation by promoting abundant root growth, in particular, encouraging the development and growth of a tree or other plant material within an urban or otherwise primarily paved environment.
[0024] In another embodiment, a tree frame and grate system supporting a customized grate or other partial enclosure, is provided.
[0025] The invention is directed to a tree frame and grate system adapted for electrical service connection for aesthetic lighting, background sound and the like, and provides in further aspects a piping to provide supplement irrigation.

FIG. 1 is a cutaway perspective view of a tree frame and grate system of the present invention;

FIG. 2(a) and 2(b) is a cutaway perspective view and a cutaway cross sectional view respectively, of an embodiment of the tree frame and grate system of the present invention;

FlG. 3 is a cutaway perspective view of a second embodiment of the present invention;

FIG. 4 is a cutaway perspective view of a third embodiment of the present invention;

FIG. 5(a), 5(b), 5(d), and 5(d) are plan view renderings of some of the many design configurations of the present invention;

FIG. 6 is a cutaway perspective view of a fourth embodiment of the present invention;

FIG. 7(a), 7(b), 7(c), and 7(d) are plan view renderings of representations of various dimensions of organic and non-organic aggregate particles;

FIG. 8 is an image of a ceramic product with a plethora of interstitial openings.

[0027] These renderings and images are included for illustrative and interpretive purposes relative to specific embodiments and applications and should not be construed as the sole positioning, configurations, or singular use of the present invention. 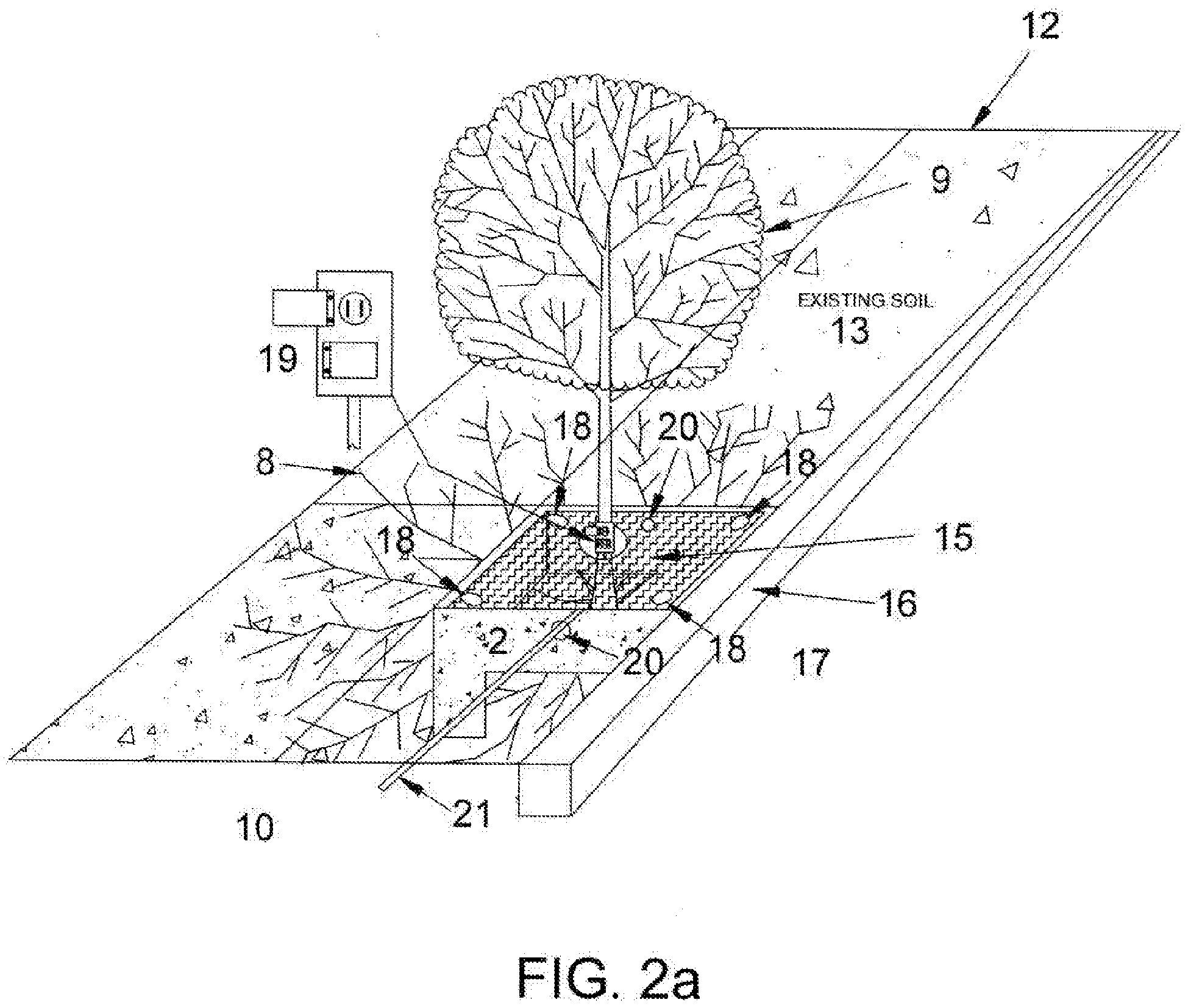 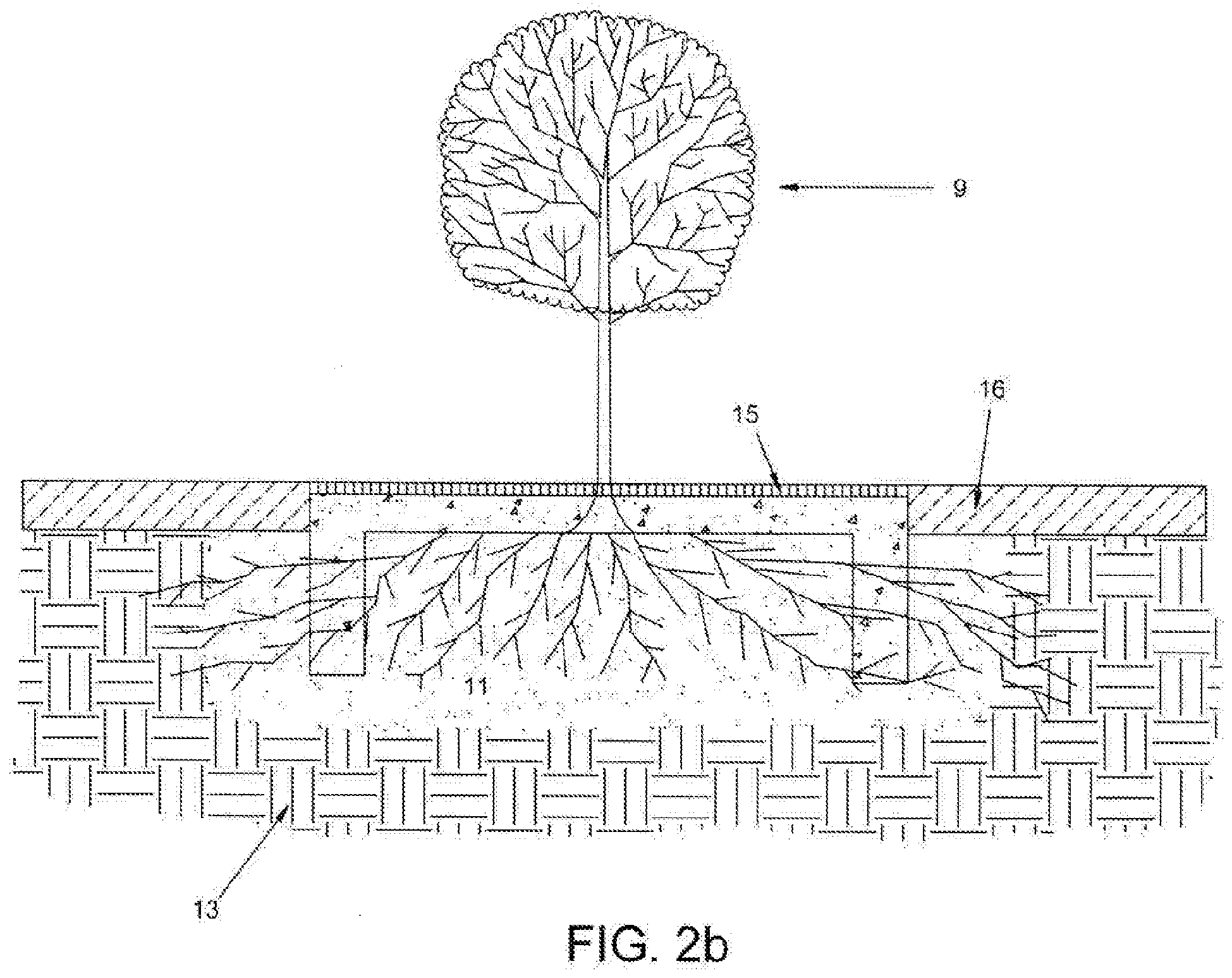 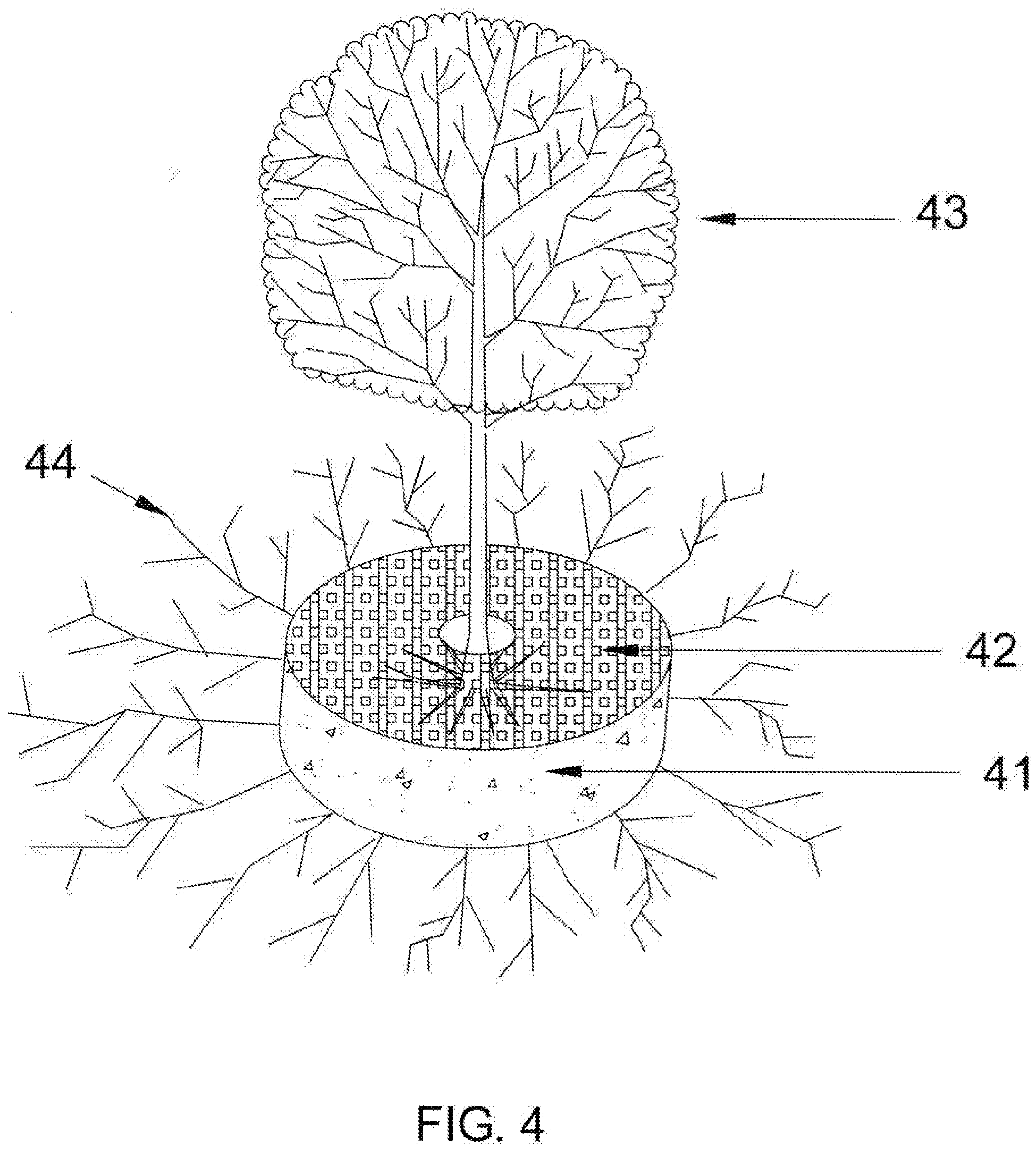 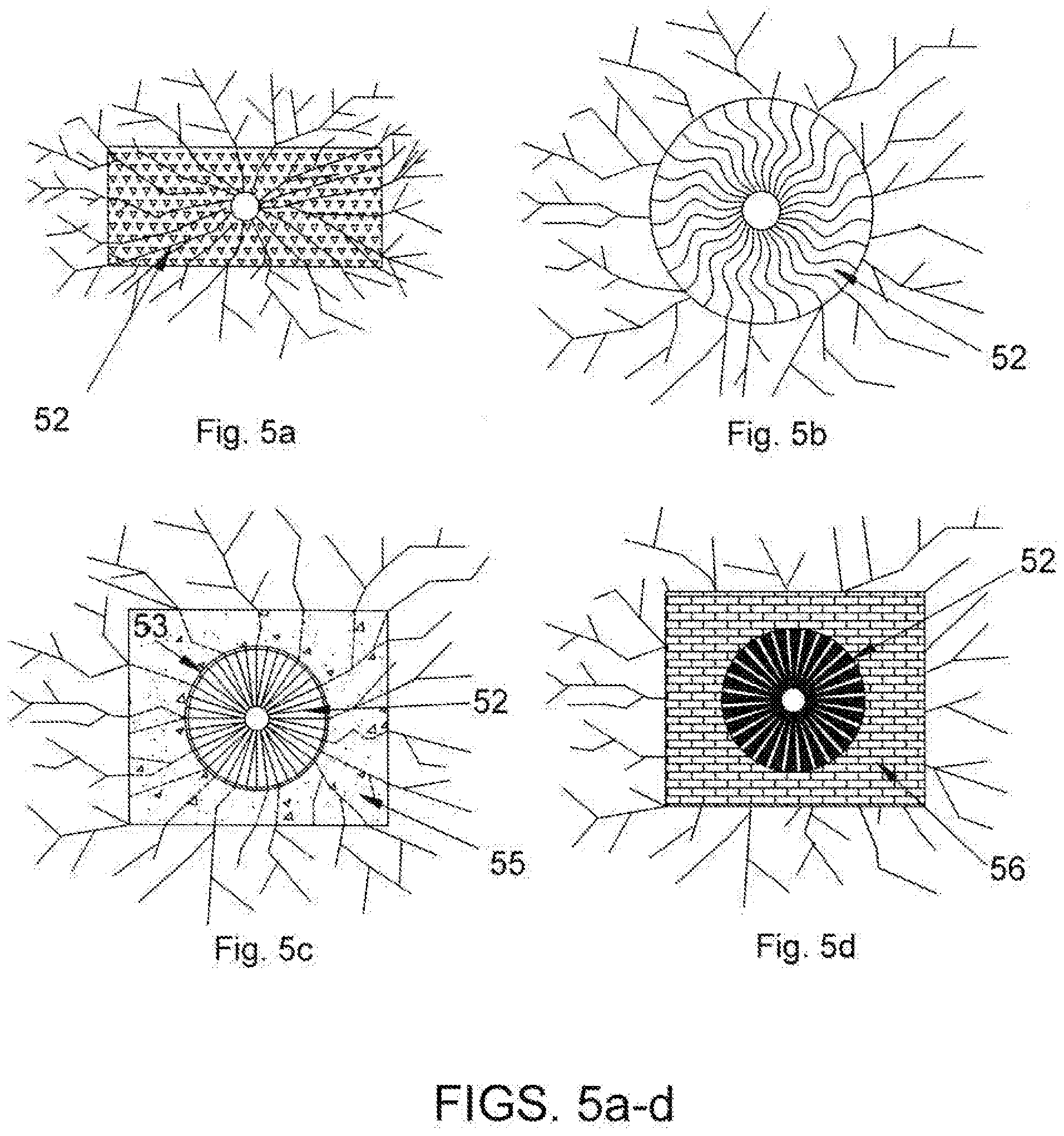 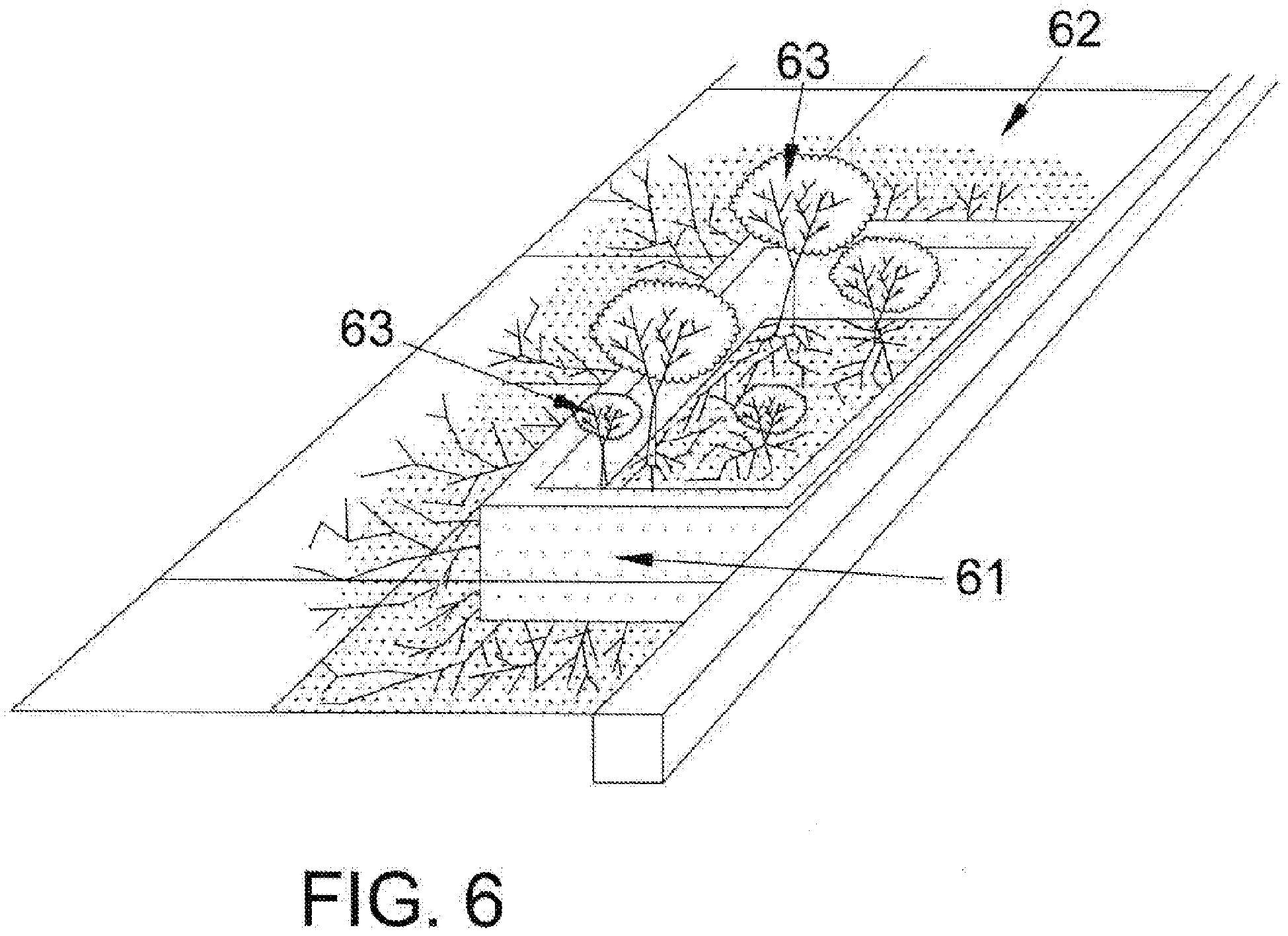 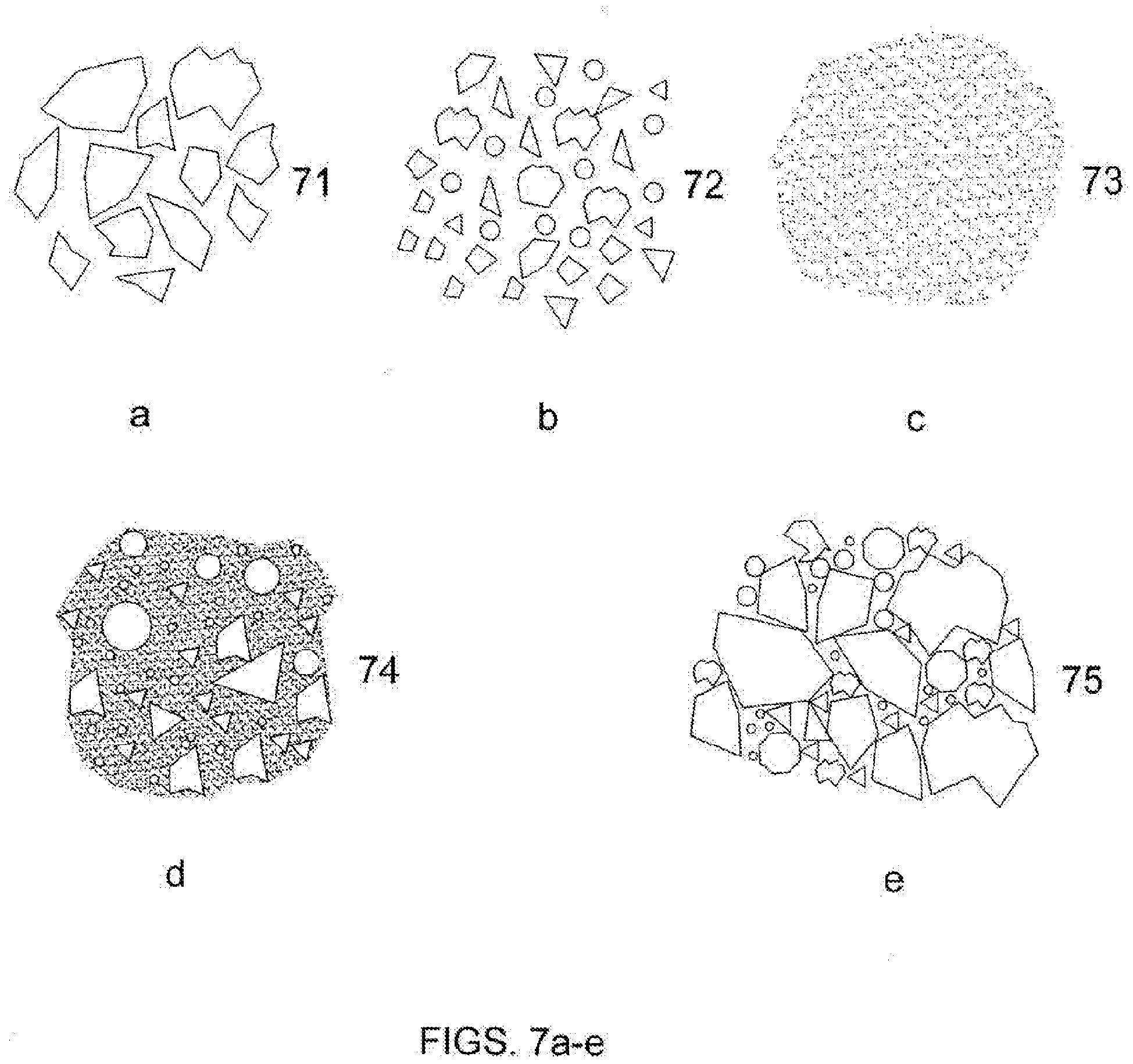 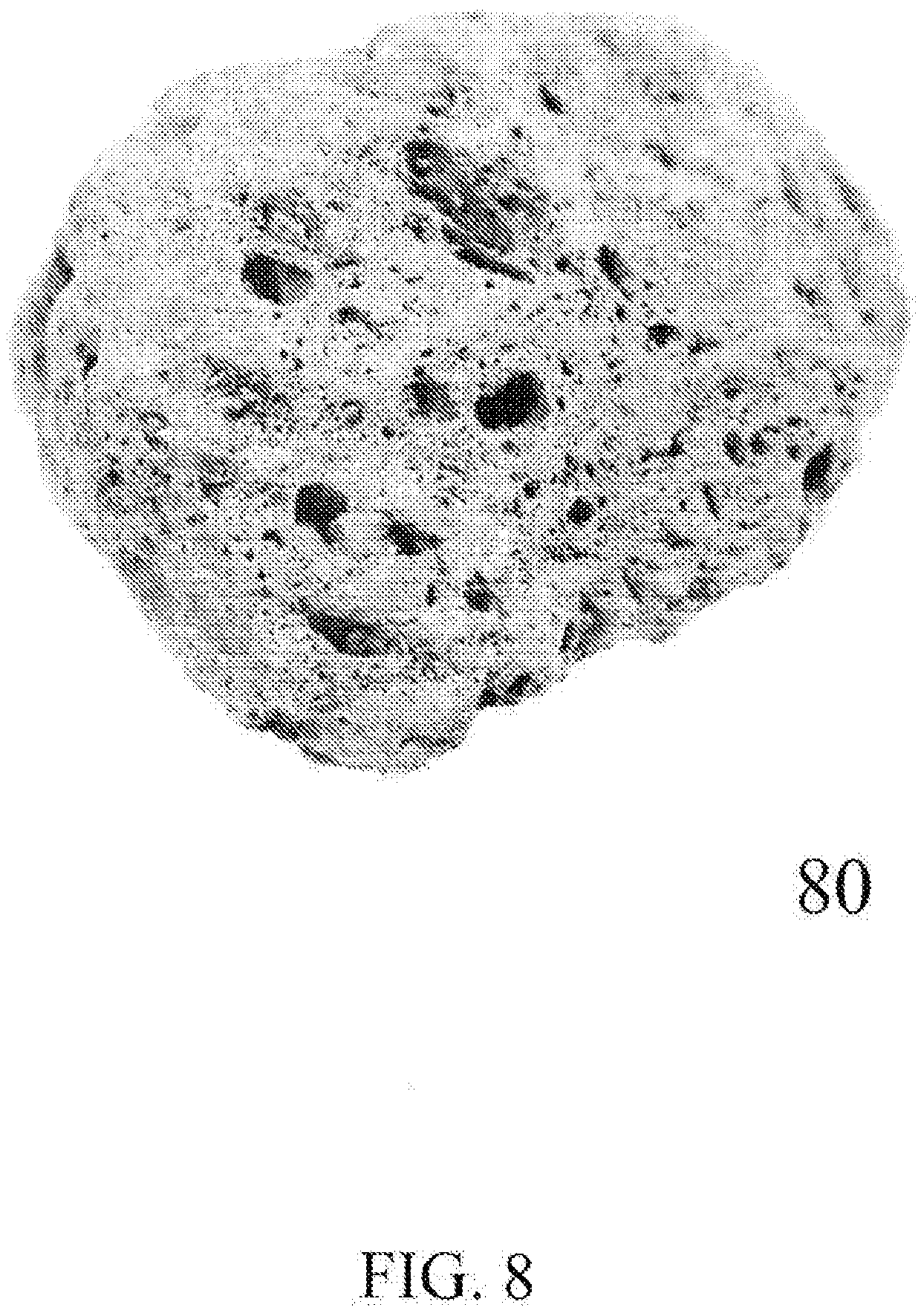