[0002] It is known to support cell growth on synthetic structures which resemble physiological ones, such structures including hydrogels.
[0003] Zhang et al (J. Am. Chem. Soc. 2003, 125, pp13680-13681) describes Fmoc protected dipeptides, for example Phe-Phe, Ala-Ala, Gly-Gly, Gly-Ala, Gly-Ser in combination with an aromatic stacking ligand, forming fibrous scaffolds. These were carried out at a pH of 3-5, which is too acidic for normal cell growth. No investigations were carried out at physiological pH. Other peptide-based gels are described in Gary Scott et al, Langmuir, vol. 29, 2013, pp 14321-14327; Mi Zou et al, Biomaterials, vol. 30, 2009, pp 2523-2530; and Apurba Das et al, Faraday discussions, vol. 143, 209, pp 293-303. Further peptide-based gels are described in Ron Orbach et al, Langmuir, vol. 28, 2012, pp 2015-2022 and Ron Orbach et al, Biomacromolecules, vol. 10, 2009, pp 2646-2651.
[0004] US Patent No. 8,420,605 in the name of the University of Strathcylde describes further hydrogels which comprise an aromatic stacking ligand, such as Fmoc or Cbz, together with peptides or peptide derivatives at physiological pH. A hydrogel was formed at a pH of 7 from Fmoc-Phe-Phe. Further work was carried out using other peptides, in combination with an aromatic stacking ligand, such as C-Phe-Phe, where C = Alanine, Valine, Leucine or Phenylalanine. The hydrogel formed from Fmoc-Phe-Phe was, however, too hydrophobic for attachment of cells and thus did not form a suitable scaffold for cell growth of anchorage dependant cells.
[0005] For optimising of cell growth, such hydrogels must form a sufficiently stiff gel to support cell growth and must do so under physiological pH. In addition, it is advantageous for the gel to be optically transparent to aid monitoring of the cells, not be too concentrated (as low concentration of gel components or large pore sizes between gel components can be beneficial for cell growth), and have sufficient longevity for the growth required.
[0006] It is known that use of an aromatic amino acid, for example phenylalanaine (Phe, F), in a peptide derivative, for example in combination with an aromatic stacking ligand, can act as a strong structural component which can increase gel strength through enhanced π stacking from the aromatic ring.
[0007] We have now found that combinations of peptides, in particular dipeptides, can be used to create hydrogels with tunable properties to suit conditions for growth of differing cell types.
[0008] It is an aim of the current invention to provide alternative and preferably improved hydrogels based on peptide derivatives which exhibit sufficient stiffness for and furnish a suitable environment for cell growth.

[0009] Accordingly, the invention provides hydrogels and precursors for hydrogels for scientific and therapeutic uses. Precursors include dry formats and pre-gelation mixtures, for example in which gelling components are provided in an aqueous format but not yet gelled. The gels and precursors are referred to as hydrogel compositions. The compositions of the invention are based on novel combinations of peptides that deliver gels that can support cell growth, especially human cell growth, with altered and preferably improved properties compared to known gels.
[0010] The invention provides for example a hydrogel composition, comprising a mixture of first and second peptide derivatives in a ratio of from 1:4 to 4:1, wherein

the second peptide derivatives comprise ASL-GA-X, in which

ASL is an aromatic stacking ligand, which is Fmoc,

Fig. 2. is a graph of stiffness against gel concentration for the combinations described;

i. the ratio of first and second peptide derivatives is from 2:3 to 3:2,

ii. the ASL is Fmoc,

iii. GA is phenylalanine, and 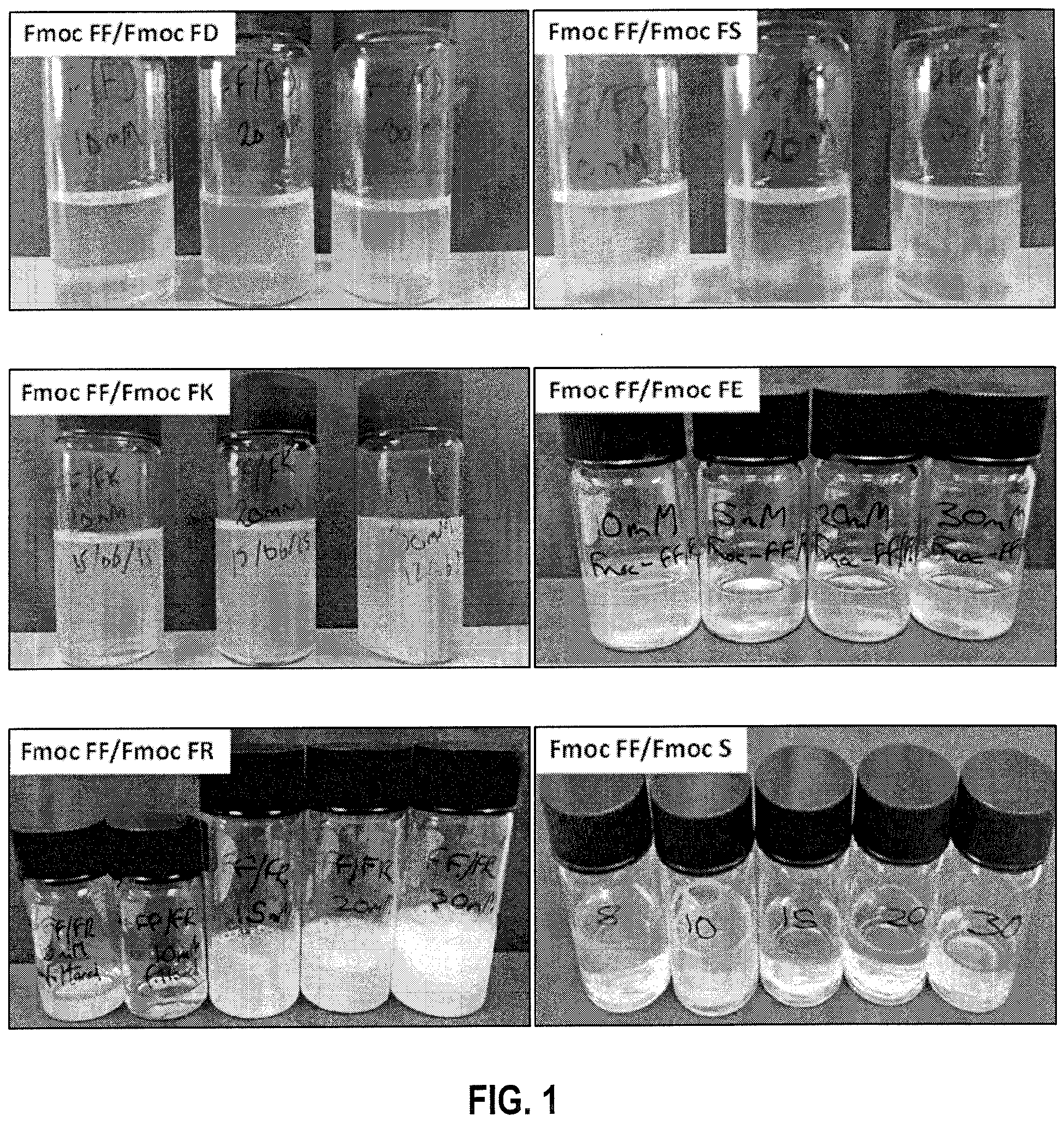 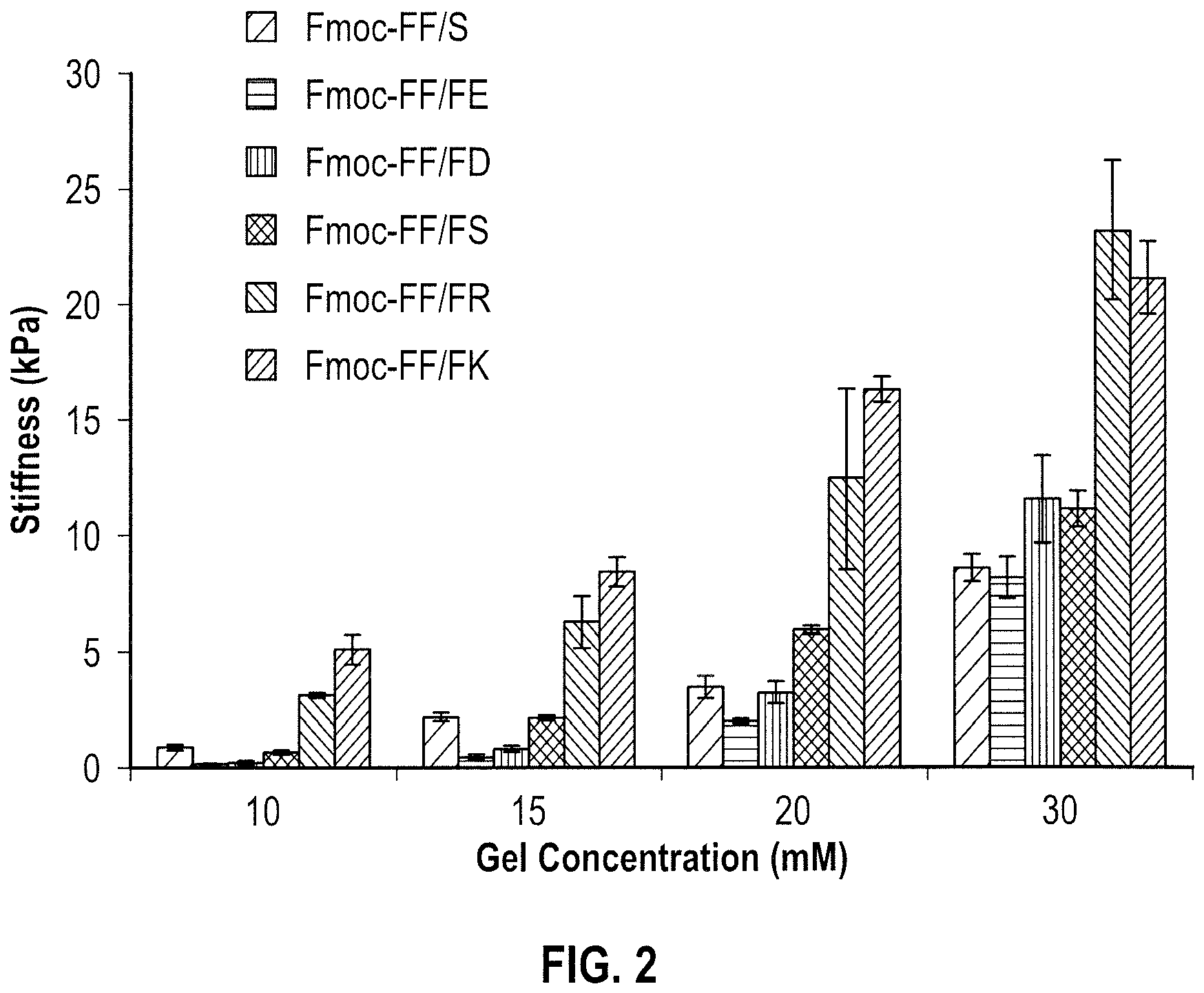 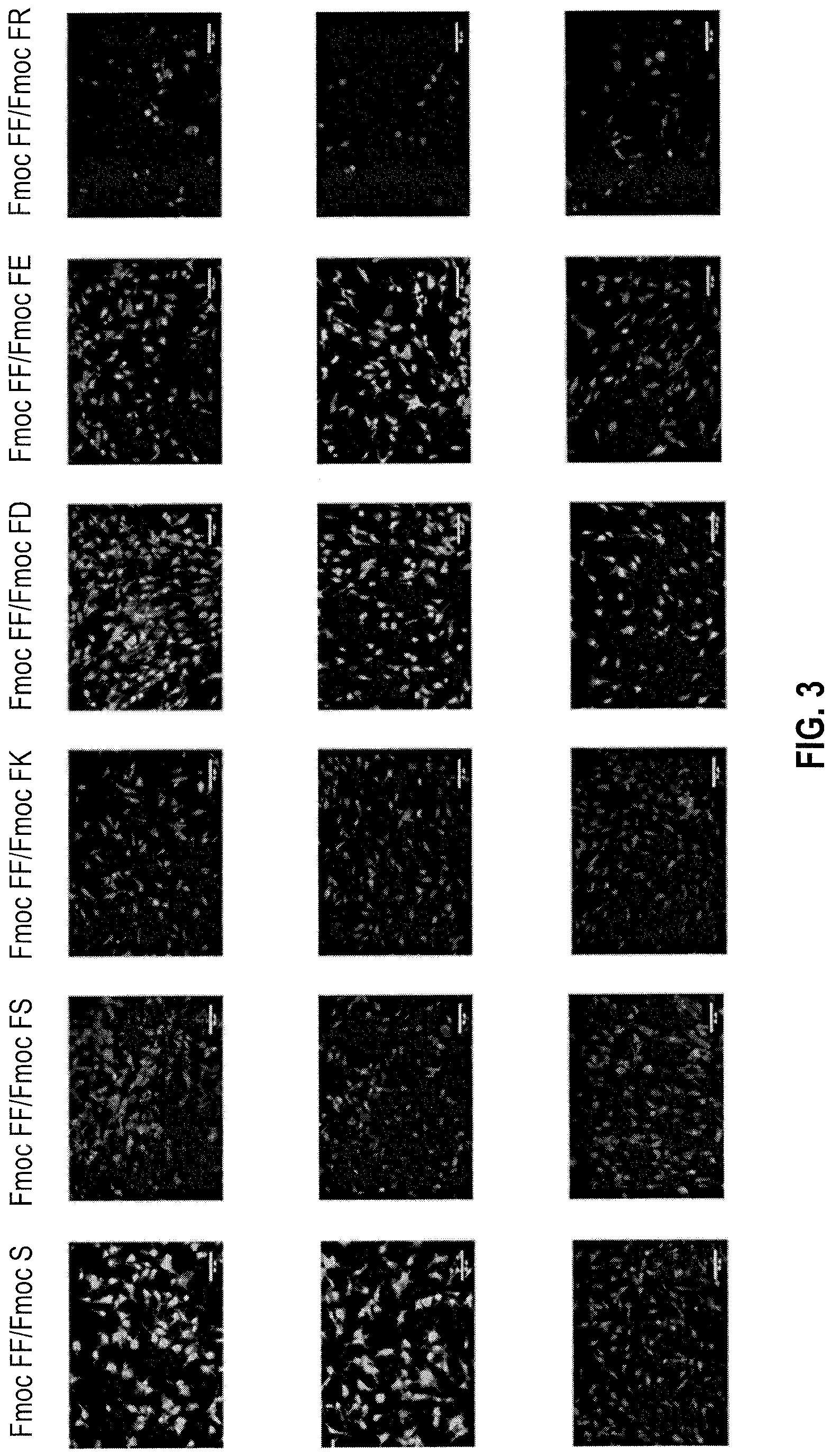 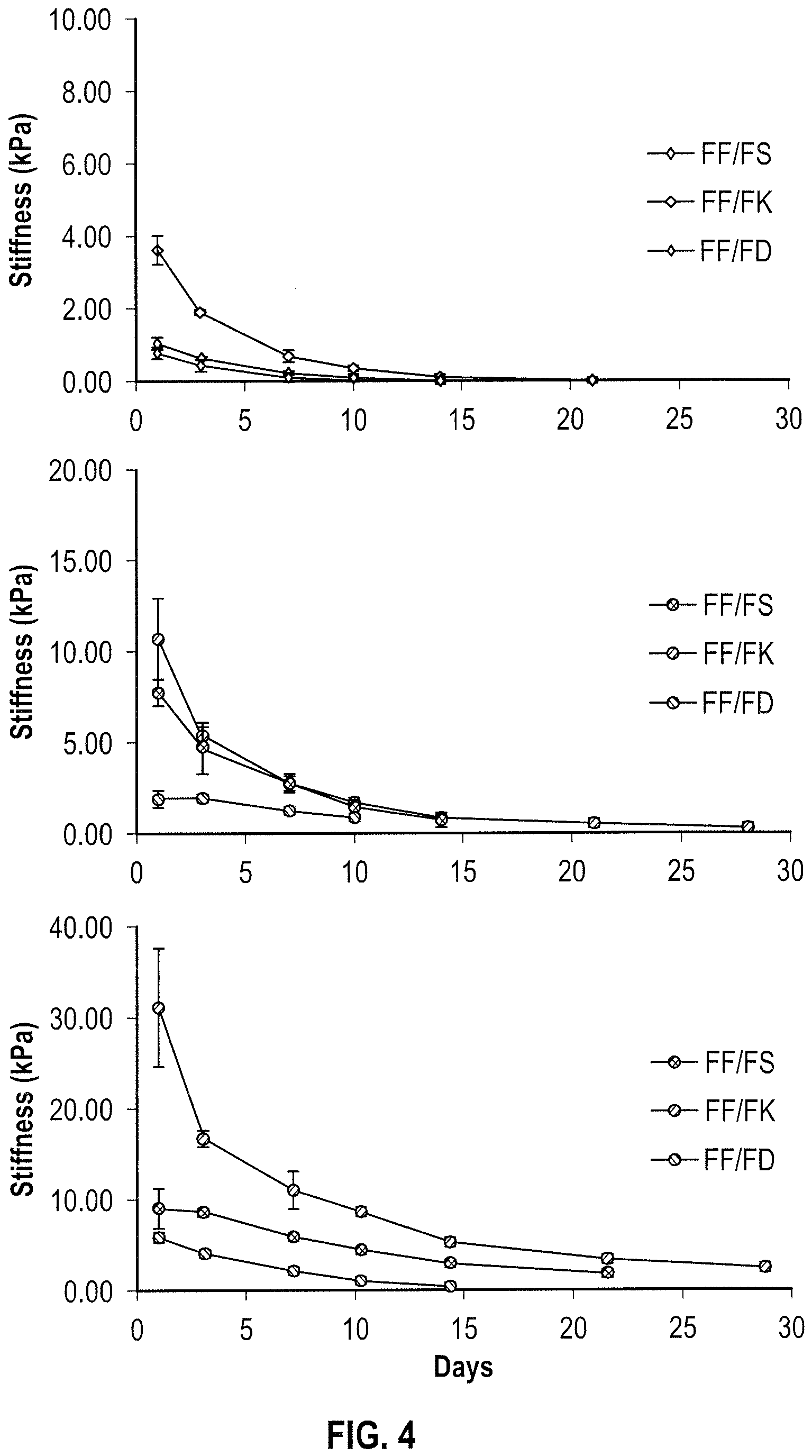