[0001] The present invention relates to a baby crib. Namely, the crib of the present invention is designed to be placed adjacent to an adult bed, particularly the bed of the mother or the person who cares for the baby at night. Such adjacent position particularly requires the possibility of adapting the height of the crib to the height of the bed, thereby creating a seamless, step-free surface.
[0002] More in detail, a prior art crib comprises a support frame, preferably formed with tubular, rod-like elements. The crib also comprises a plurality of perimeter walls, which are formed from flexible material and are attached to the frame. The crib further comprises a bottom wall, also attached to the frame, with a mattress for supporting a baby lying thereupon.
[0003] One of the aforementioned perimeter walls is configured to be able to be opened. This perimeter wall defines a frame side that is designed to be adjacent to the bed. Particularly, this wall can be detached from the adjacent walls and overturned on the wall itself, to form an opening through which the person who cares for the baby may access the baby without rising from his/her bed.
[0004] Prior art crib of GB 2423243 is attached to the side of the adult bed by means of a projection, that protrudes from the base of the crib and abuts the mattress of the adult bed.
[0005] US 2005/034232 describes instead a, crib-is attached to the bed using one or more belts, which are fastened to the bed and fixed to the crib at an attachment area and are later manually tensioned using an adjustment device.
[0006] In both cases, a problem arises in that, in spite of all the efforts for ensuring that the crib is positioned next to the adult bed with as small a gap as possible therebetween, no one can exclude that, once the wall portion has been overturned, a temporarily unattended baby may come out of the crib and fall within the gap, as small as it is, between the crib and the side of the bed of the adult who is taking care of him/her.
[0007] In addition, if the crib is displaced in US 2005/034232 once the belts have been fixed, the gap between the crib and the bed may become wider, thereby increasing the hazards for the baby.

[0008] In this context, the technical purpose of the present invention is to provide a baby crib that can obviate the aforementioned prior art drawbacks.
[0009] A further object of the present invention is to provide a baby crib that can increase the safety level for the baby, by particularly improving adhesion of the crib to the bed.
[0010] The aforementioned technical purpose and objects are substantially fulfilled by a baby crib that comprises the technical features as disclosed in one or more of the accompanying claims.
[0011] Namely, a baby crib of the present invention comprises a frame and a plurality of peripheral walls made of a flexible material and secured to the frame. At least one of the peripheral walls has a variable height. The crib further comprises a bottom, which is secured to the frame.
[0012] The crib comprises a support structure for the frame. Such support structure is configured to increase and/or decrease the height of the bottom-.
[0013] The crib also comprises elastic return means, which are fixed to the frame and can be fixed to a bed for pushing the frame against the bed.
[0014] The elastic return means comprise a winding belt attached to the frame, a roller and a spring configured to apply an clastic torque to the roller to wound the belt around the roller.
[0015] The crib solves the aforementioned technical problem by ensuring full adhesion between the frame and the bed, due to the addition of the elastic return means. Furthermore, this position is also restored if the crib is inadvertently displaced.

[0016] Further features and advantages of the present invention will result more clearly from the illustrative, non-limiting description of a preferred, non-exclusive embodiment of a baby crib as shown in the annexed drawings, in which: 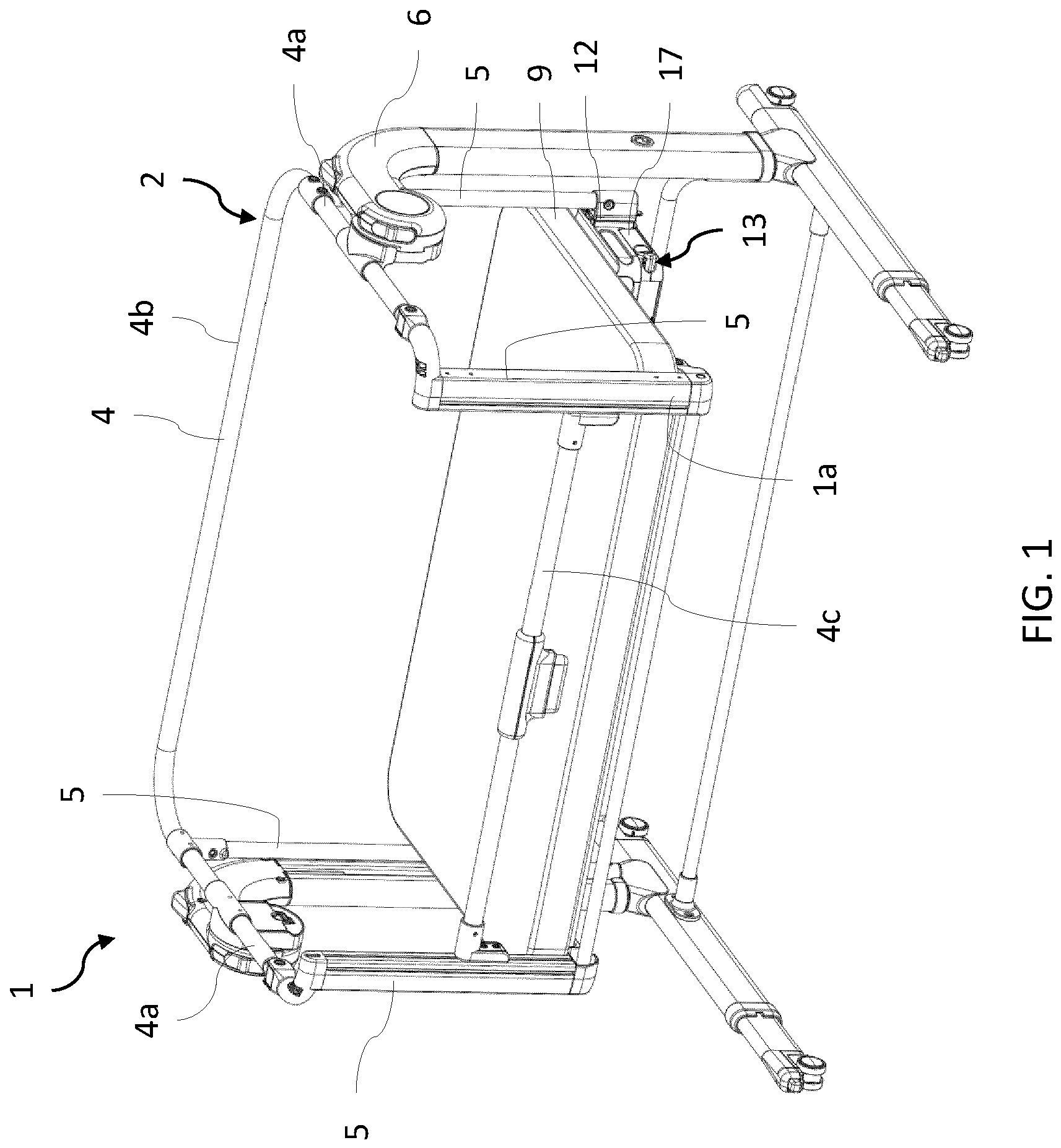 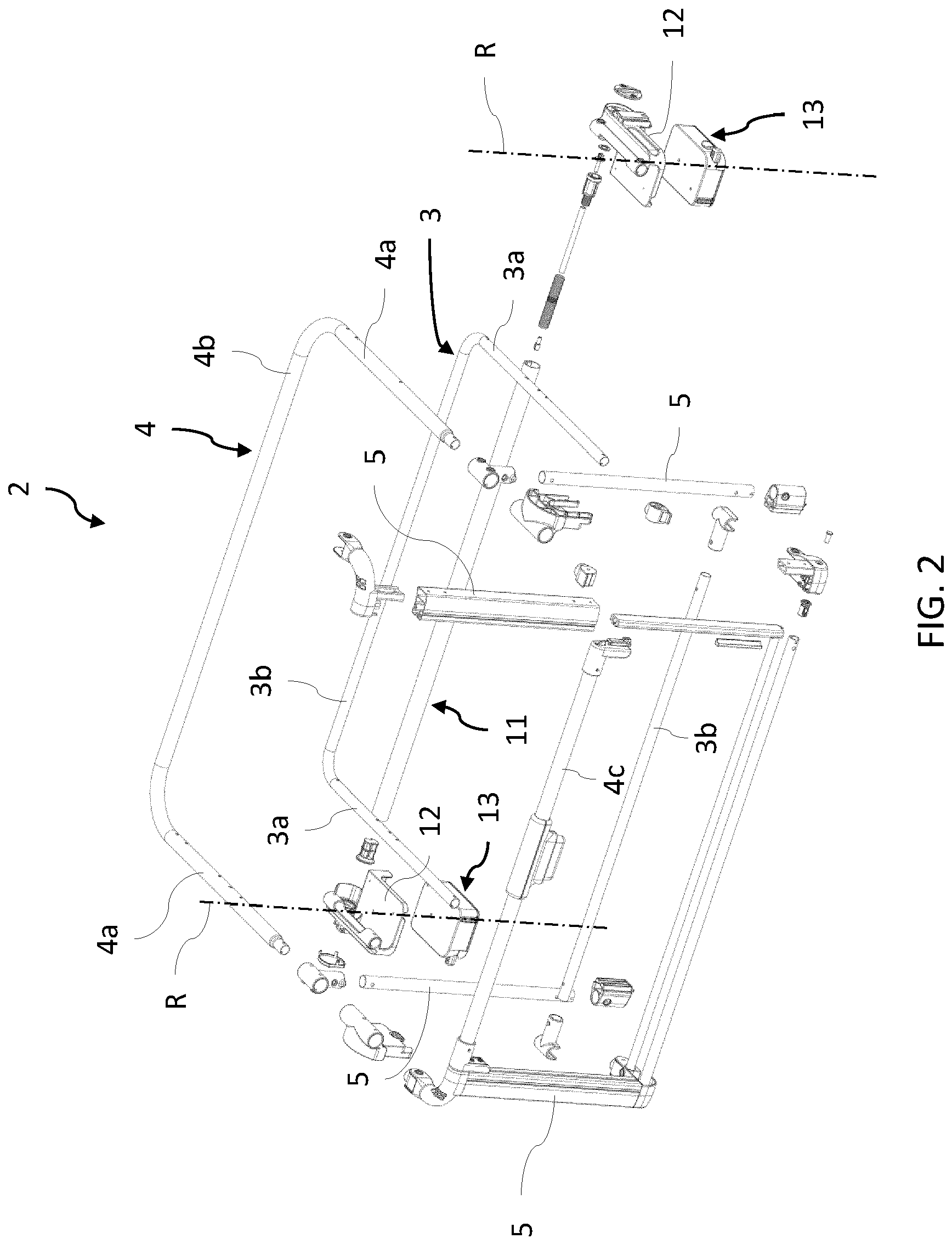 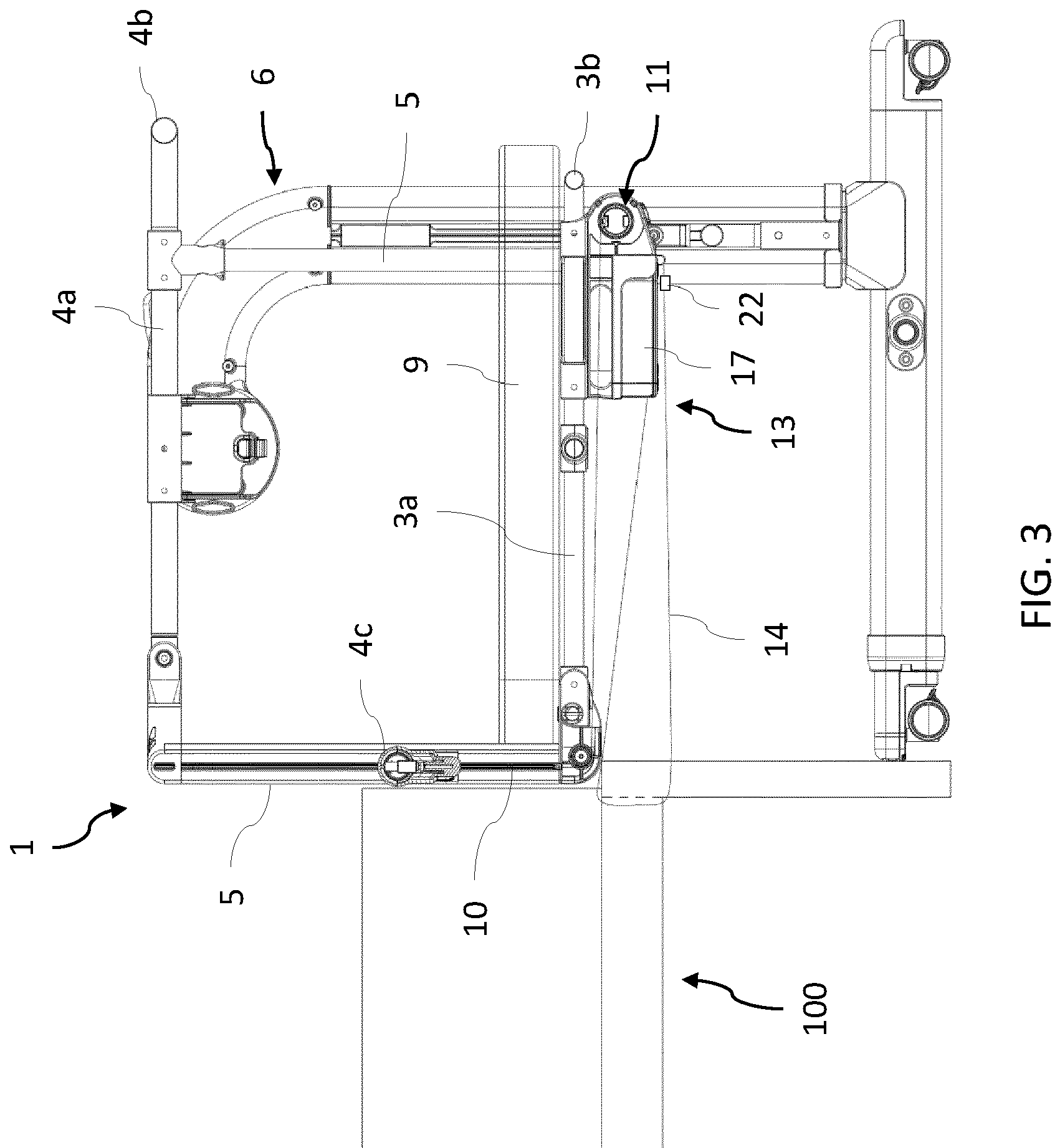 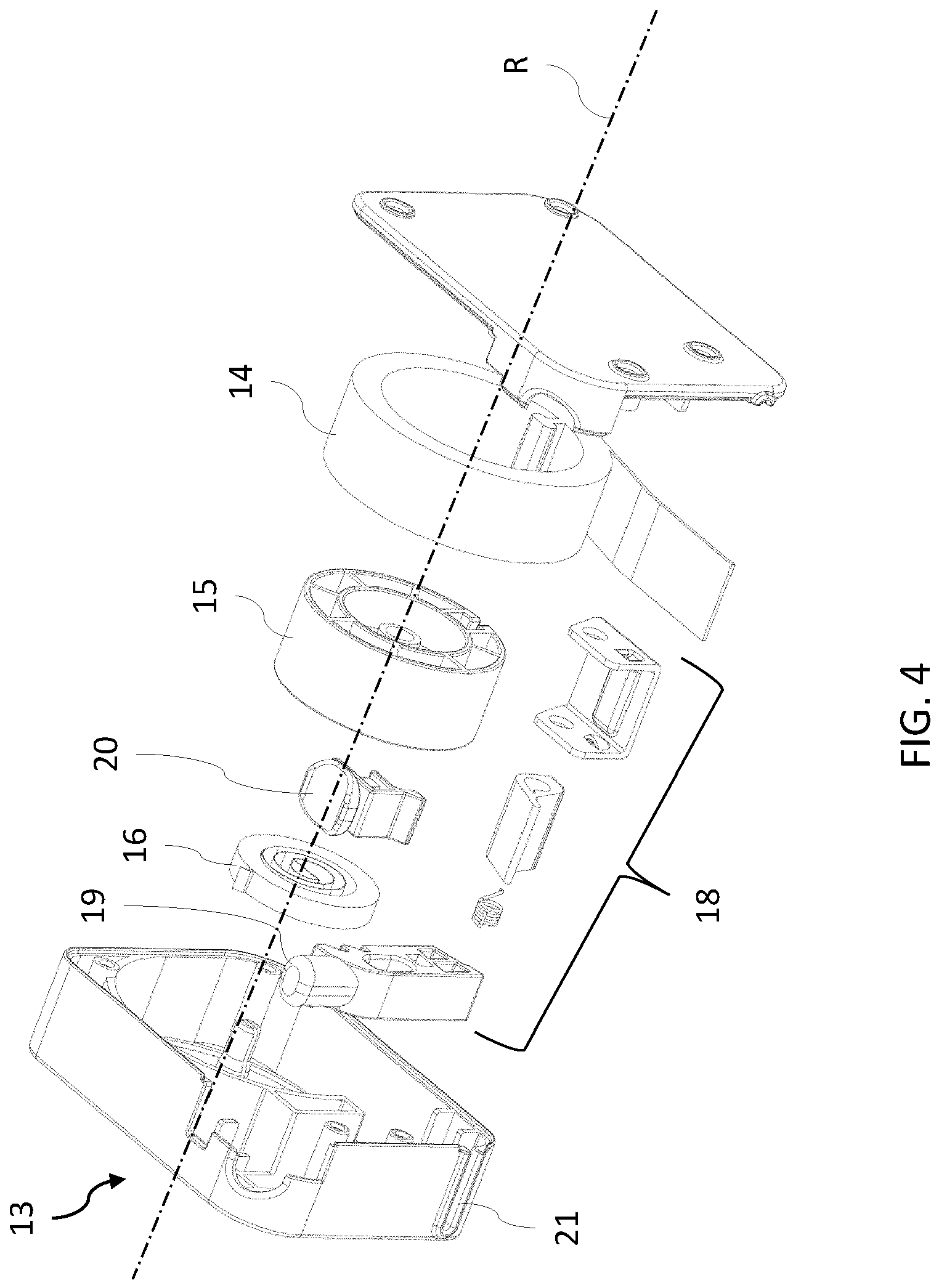 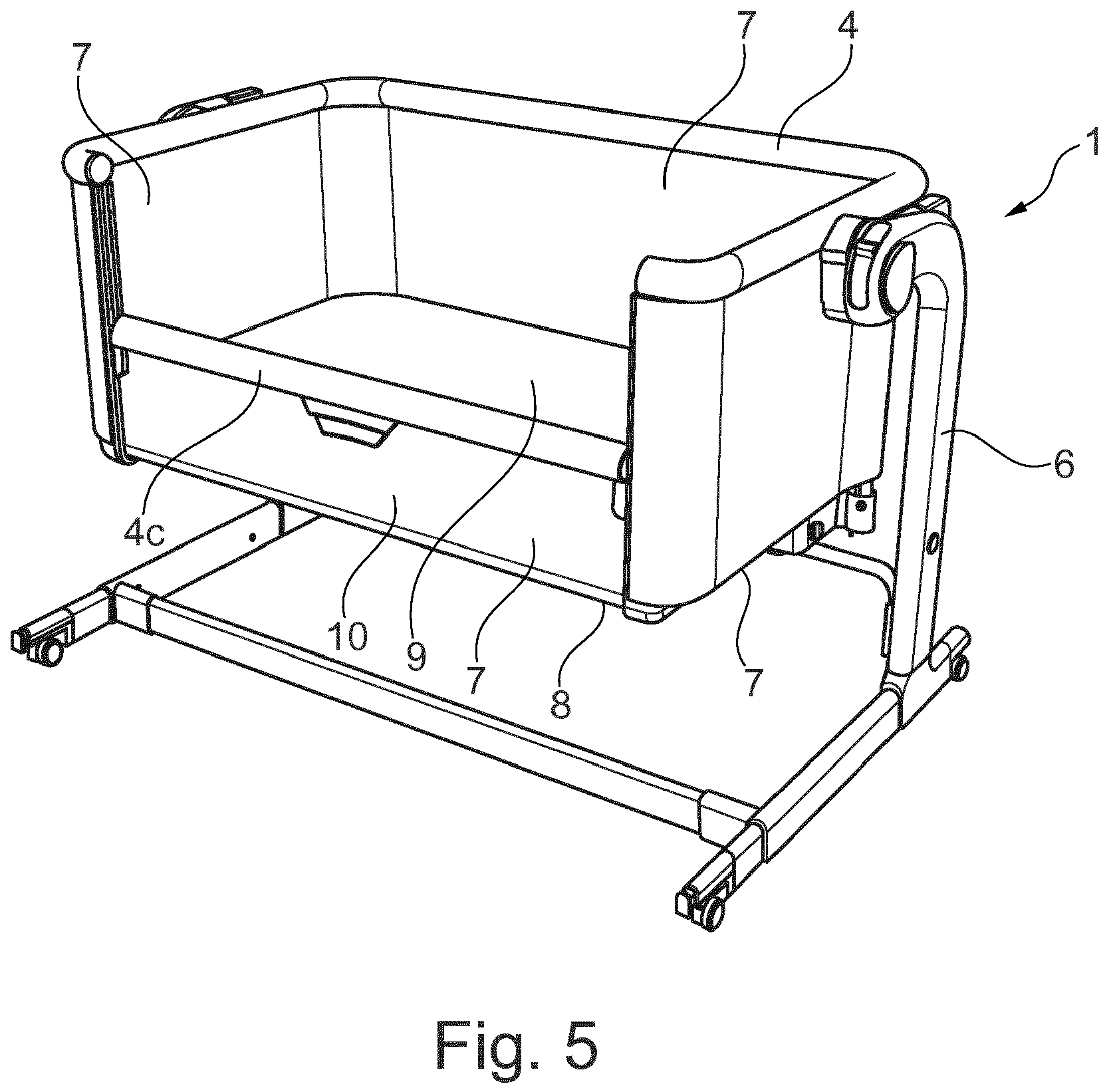