Fig. 1 shows a perspective view showing the relative position of the upper end of a prop that incorporates the clamp, made of steel rod, with respect to the mixed beam to be supported.

Fig. 2 is a view similar to Fig. 1, showing the prop coupled to the beam to be supported, the lateral centring and retaining wings of the clamp being supported on the lateral faces of the supported beam.

Fig. 3 is a perspective view of the same elements as in Figs. 1 and 2, from a part located under the top plate of the prop.

Fig. 4 is a perspective view of an embodiment of the clamp of the invention based on a single rod of spring steel.

Fig. 5 shows a front view in elevation, from the fixing ends on the plate, of the same element shown in Fig. 4.

[0020] As is shown in the figures, the prop, which is the object of the present invention, comprises a right foot -1- that is intended to rest on the ground or floor of the structure, and has, although they are not shown, means for varying the height and for fixing at the height selected, as well as a top supporting plate -2- that is to receive the corresponding load at the place of support with the beam -3-, which is shown in the figure as a mixed beam formed by a lower element -4- made of wood and a tubular upper element -5- made of steel.
[0021] Said prop of the present invention has, connected to the upper face of the plate -2-, an elastic clamp for centring and coupling that has two wings -6- and -7- of the elastic type intended to press on the side walls of the beam -3- for holding the prop in position, preventing it from falling and limiting its rotation about its own axis. For this, in a preferred embodiment, the clamp comprises a section of spring steel rod with folded wings -6- and -7- connected to a bridge or loop -8- for coupling to the plate -2-, by inserting the plate in the loop, achieving retention of the prop by two sides of said wings, at the same time allowing centring of the prop with the other two sides, limiting the rotation of the prop about its axis. In more detail, in the embodiment shown as a suitably folded single rod of spring steel, as can be seen in Figs. 4 and 5, the prop carries, incorporated simply by elastic retention, the rod element provided with the two wings -6-and -7- joined together by a lower loop -8- that fits elastically on the plate -2-. Each of the wings -6- and -7- is formed by two arms such as -6'-, -6"- and -7'-, -7"-, and each wing can form a structure of inverted V shape, inverted U shape or similar, giving a minimum of one arm -6'-, -7'- for support on the side walls of the beam to be supported and a minimum of another arm -6"-, -7"- slightly displaced laterally for performing the function of centring the beam in the case of partial rotation of the prop about its axis. This can best be seen in Fig. 5, which shows the lateral displacement between the arms -6'-, -6"- and -7'-, -7"-, of each wing, to allow the functions described, of fixing on the beam and centring, limiting the rotation of the prop with respect to its axis.
[0022] As can be seen, the loop -8- has a lower side -8'-, Figs. 4 and 5, slightly convex in its middle part -9- to improve contact with the lower face of the plate -2-, the arm -8'- of which is prolonged at both ends by respective curved zones -10- and -11-, for example U-shaped, V-shaped or similar, intended to fit together with the plate -2- in its positioning.
[0023] Retention of the rod element on the plate -2- is completed by introducing the folded ends -12- and -13- of the corresponding sides -6"- and -7"- of the wings into respective holes, such as -14- and -14'-, which are shown in Fig. 1.
[0024] By means of the present invention, assembly of the prop can be facilitated considerably, since the worker, from below the beam -3-, with feet on the ground or on the corresponding floor of the structure, will simply have to press gently on the prop from the bottom upwards, inserting it in the bottom part of the beam, the prop being retained laterally by the elastic wings connected to the plate -2-, in particular in the case of the example shown, by the arms -6'- and -7'-, whereas the arms -6"- and -7"- are slightly displaced with respect to the arms -6'- and -7'-, performing a function of centring the prop with respect to the beam, limiting any rotation of said prop about its axis of symmetry. Similarly, disassembly of the prop can be effected simply by pulling when the recovery operation is taking place.
[0025] As will be understood, the wings connected to the plate -2-, which in the example shown in the figures consist of a single element made of spring steel rod, could be produced in many other shapes and materials, for example, multiple wings, sheet wings welded or riveted to the plate, elastic clamps with some other structure and different fixing, which would be included within the scope of the present invention.
[0026] The present invention therefore comprises in combination the elastic clamp for centring and coupling that has been described and the prop configured for fixed coupling of said clamp on the top plate of the prop, as well as the method of assembly. The prop according to the invention is very easy to couple to a beam, especially a beam for supporting floor formwork by the simple presentation of the prop from the bottom part of the beam by the worker, coupling the clamp elastically on the bottom part of the beam, exerting pressure on the two lateral faces thereof, all without limitation of the place where the coupling is carried out, since the new prop provided with the clamp does not require any special feature of the beam for centring the prop, as was usual in the prior art.
[0027] Although the invention has been presented and described with reference to embodiments thereof, it will be understood that these do not limit the invention, therefore variations of many design or other details will be obvious to a person skilled in the art after interpreting the subject matter that is disclosed in the present description, claims and drawings. Accordingly, the present invention is only limited by the scope of the following claims.

1. Prop for supporting a beam: (3), whereby the prop comprises

- means of support on a supporting surface,

- means for varying the height and for fixing at the height selected as well as a top plate (2) fixed on the upper end of the prop,

∘ another side slightly off-centre and separated with respect to the plane of symmetry of a part of the wing (6,7), ntended to limit the rotation of the prop about its axis,

- incorporating the elastic clamp in the top plate (2) of the prop according to any one of claims 1 to 5,

- presenting the prop with the fixed clamp to the lower face of the supporting beam (3) of a shuttering at a freely selected point along it, and

- pressing the prop, from the bottom upwards, against the bottom part of the beam: (3) so that the wings (6,7) of the clamp open elastically to hold the prop in the selected place of the clamp, and

- setting the prop upright, supported at the bottom on the supporting floor.

- introducing the top plate (2) into the lower loop (8) of the clamp and the folded free ends of the wings (6,7) of the latter into the respective holes of the plate of the prop. 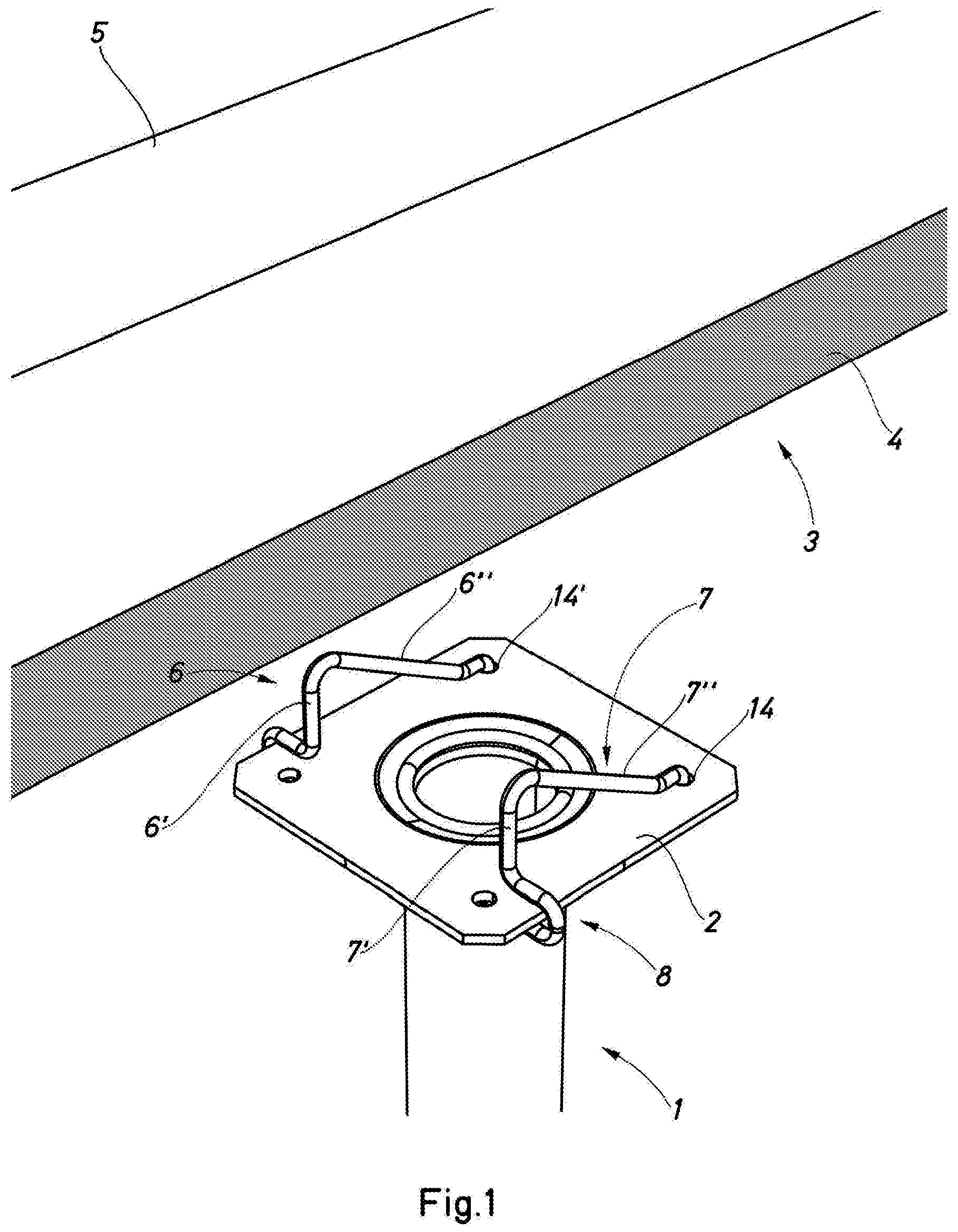 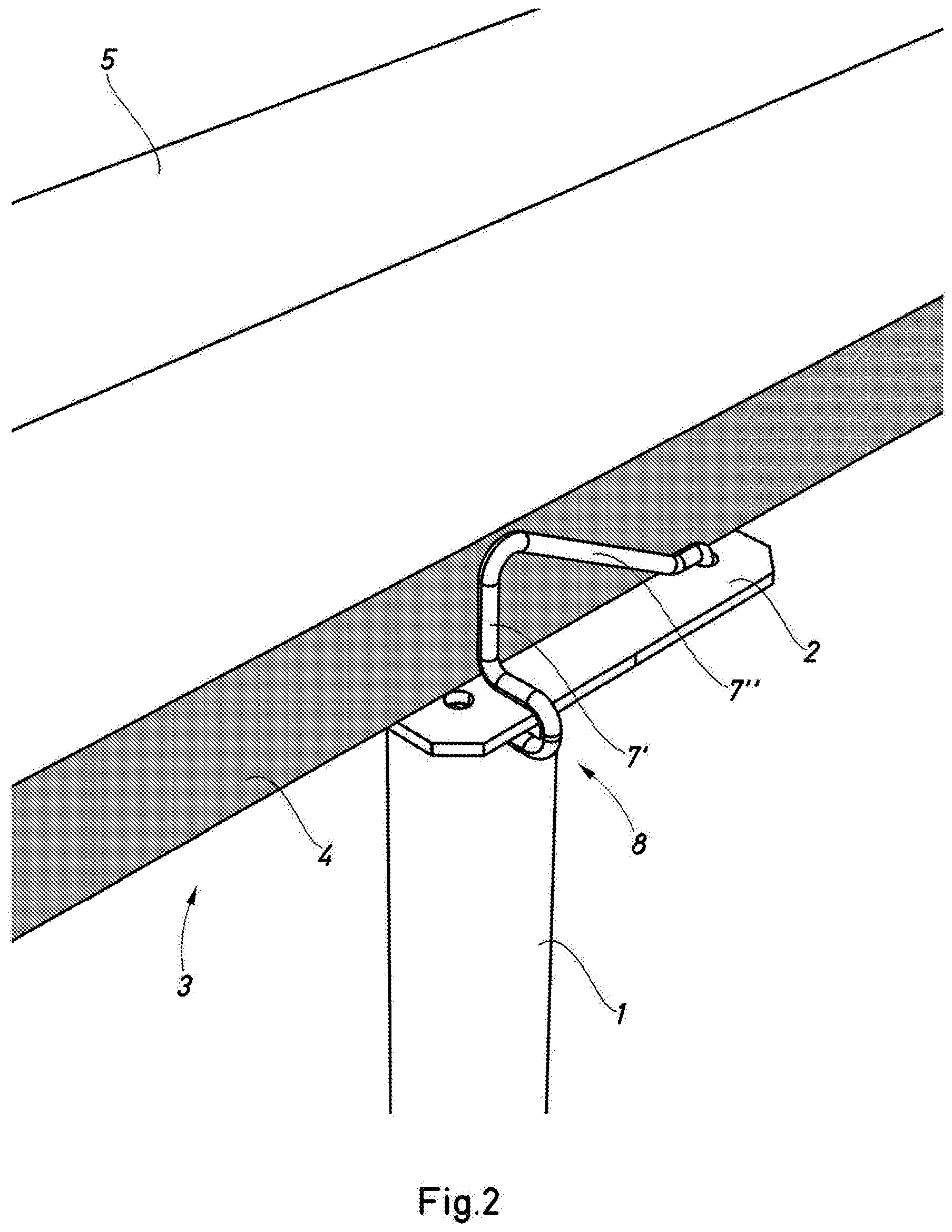 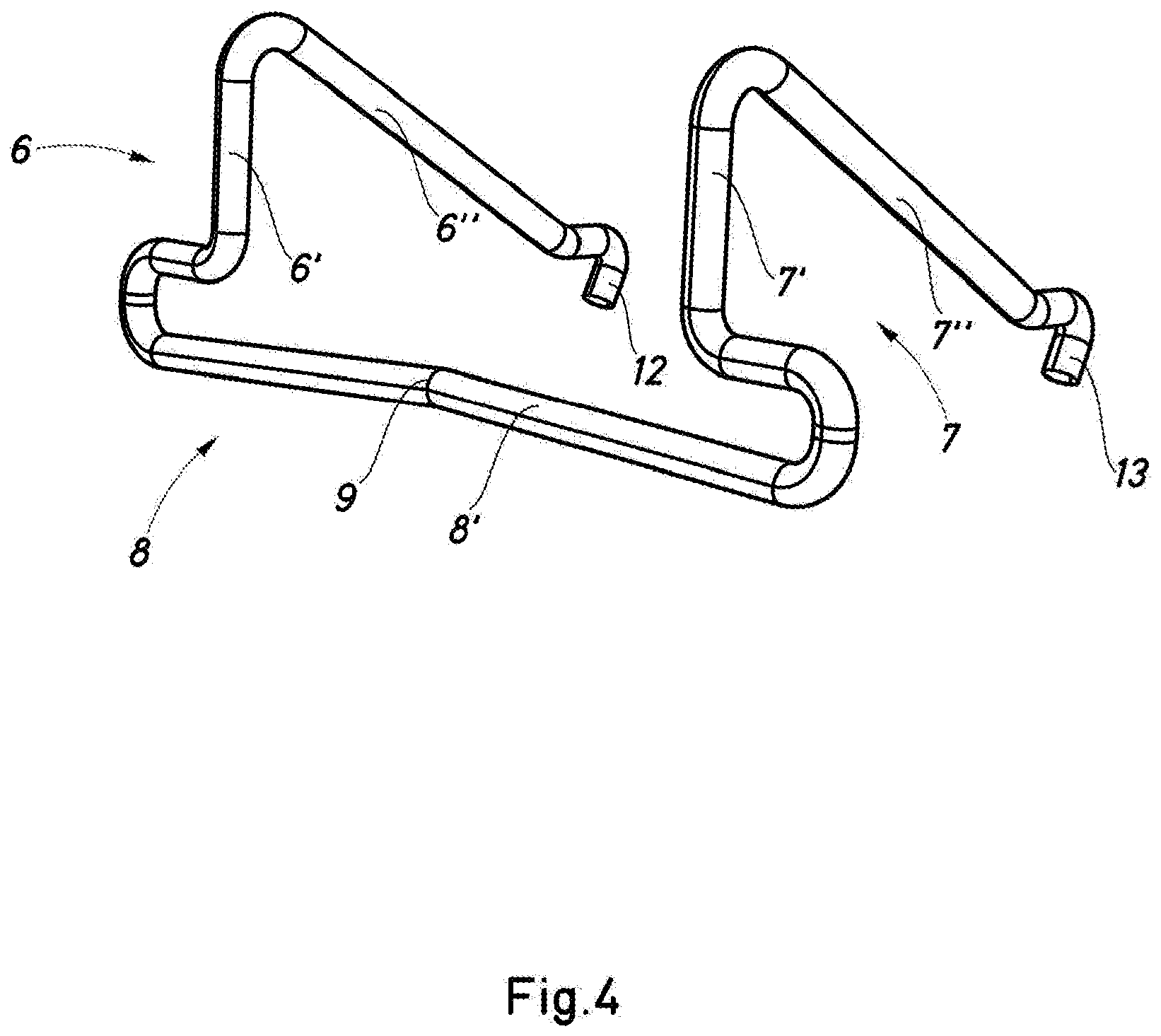 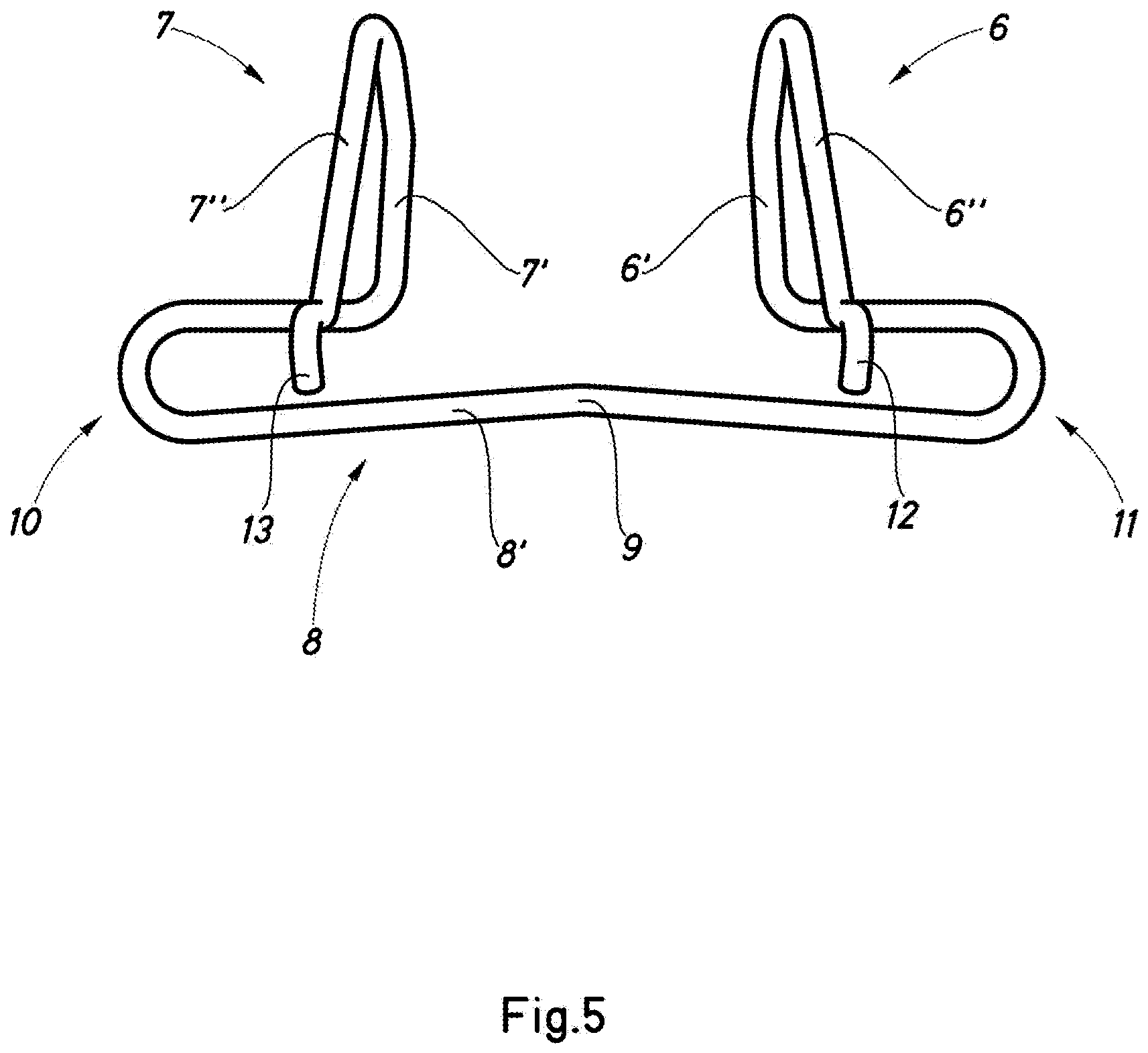