FIELD AND BACKGROUND OF THE INVENTION

[0001] The present invention, in some embodiments thereof, relates to an injector device with a flow path for the material to be injected and a drive mechanism for extending and retracting the needle, and, more particularly, but not exclusively, to an arrangement for ensuring the sterility of the flow path.
[0002] US Patent 6,843,782 to Joseph Gross et al, assigned to Elan Pharma International Limited, discloses an injector device having a base member defining a skin-contacting surface, a syringe serving as a reservoir for the drug, and means for expelling drug from the syringe. The syringe is connected to the base member such that the longitudinal axis of the syringe is substantially parallel to the skin surface. A delivery needle is in communication with the syringe. The needle has an angled bend which directs the tip of the needle substantially perpendicular to the skin-contacting surface. In use, the tip of the needle is adapted to penetrate the skin of the subject.
[0003] In the cited device, the fluid path extends from the syringe to the needle and is connected to the needle in a straight line and is in this state when the device is inserted into the filler device for loading with the material to be injected. The needle remains straight and is covered by the needle cap as it is removed from the filling device. Subsequently, the needle is bent while filled with fluid, and bending the needle is irreversible.
[0004] Therefore if the cited device is disassembled and the cartridge/fluid path removed, it cannot be returned to the original state at which it was immediately after filling. Thus if the injection material expires or the device needs to be recalled, say if a batch is found to have been contaminated, the device cannot be emptied and refilled for use.
[0005] A further disadvantage of the cited device is that bending the needle while the cartridge is full causes metallic particles from the needle to be released into the injection material. This would not be inspected during the conventional particle test in the existing automatic filling process. The metallic particles compromise the purity of the injection material and thus such a device cannot be obtain approval for use.
[0006] Another device is known from International Patent Application no. WO-A1-97/21457, where a liquid drug delivery device is disclosed that is adapted to be adhered to the skin of a subject by a base member defining a skin-contacting surface having an adhesive coating. A columnar cartridge serves as reservoir for the drug and is incorporated in a housing which is connected to the base member such that in use the longitudinal axis of the cartridge is disposed substantially parallel to the skin-contacting surface. A delivery needle communicating in use with the interior of the cartridge penetrates the skin of the subject when the housing snaps downward relative to the base member. This action also causes the actuation of a citric acid/sodium bicarbonate gas generator which generates a gas to move a piston within the cartridge, compressing the drug compartment. This compression causes a stopper to be penetrated by a conduit in communication with the delivery needle, allowing the drug to be ejected from the compartment through the needle and into the subcutaneous tissue of the subject.

[0007] The scope of the invention is defined by the independent claim. The dependent claims describe further embodiments.
[0008] The present embodiments provide a fluid path in which the needle is bent prior to filling. The integrity of the fluid path is retained with the cartridge or reservoir and as long as the injector has not been used, the cartridge can be exchanged. A removable cover may be provided to facilitate such removal.
[0009] The present embodiments ensure a sterile fluid path which is separate from the needle drive mechanism. In embodiments the drive mechanism is not itself sterile. Thus if there is a fault with the drive mechanism, the fluid path can be extracted as a whole and placed in a different device, or in some cases the drive mechanism can be fixed, without compromising the sterility of the fluid path.
[0010] The connection between the fluid path and the drive mechanism may be purely mechanical. One of the consequences is that the mechanical parts and the biologically active fluid parts can be separated for more environmentally friendly disposal.
[0011] The fluid path is sterile while the drive mechanism and the rest of the device may not be. Thus there is no compromise of the sterility of the injection when the injector device is placed directly on the patient's skin for injection.
[0012] The present embodiments may allow for easy handling. In particular a patient who is self-injecting usually places the device on one of his or her arms. In such a case there is only one hand available to operate the device. In the present embodiments, once the device is gripped in one hand, it is possible to remove the needle shield and adhesive with one motion from the front to back and there is no need to change the holding position on the device, which would require a second hand.
[0013] The device may be designed like a computer mouse to be gripped by the fingers of a single hand and, like a computer mouse, the gripping fingers are in the right place to activate the needle. Removal of the device is also possible in a single peeling motion from front to back or from back to front.
[0014] According to an aspect of some embodiments of the present invention there is provided a device for drug injection comprising:

a drive chain for moving the cartridge, by the rotating or linearly displacing, to extend the needle to the injection point, the drive chain being mechanically connected to the fluid path to move the cartridge, the mechanical connection being such as to carry out the rotating or linearly displacing while maintaining the fluid path sterility. The embodiments illustrated herein show the cartridge being rotated but it can equally well be mounted to slide towards the base.

[0015] In an embodiment, the fluid path is preshaped to contain the angle, which may for example be a right angle.
[0016] In an embodiment, the mechanical connection is designed to allow the drive chain to be separated from the fluid path while maintaining the fluid path sterility.
[0017] An embodiment may comprise a housing and a button to operate the drive chain, the housing being shaped and sized to be held in a one handed grip, the button being positioned to be operated by fingers of the one-handed grip.
[0018] An embodiment may comprise a front end and a rear end and an adhesive layer for attachment to skin of the patient for the injection.
[0019] The device may be attachable and detachable to the patient via the adhesive layer using the one-handed grip and a rolling motion between the front end and the rear end.
[0020] An embodiment may comprise a cover in the housing, the cover being removable to allow removal of the reservoir via the housing.
[0021] In an embodiment, the reservoir is removable with the fluid path.
[0022] There is also provided a method for filling, loading and removing a cartridge in an injector device wherein the cartridge is held lengthwise at an angle to a plane of the skin of a patient receiving an injection, the method comprising:

after adding the angle, filling the cartridge with injection fluid;

loading the cartridge, with the fluid path, into the injector device; and

removing the cartridge, with the fluid path, from the injector device.

BRIEF DESCRIPTION OF THE SEVERAL VIEWS OF THE DRAWING(S)

FIG. 1 is a simplified diagram showing a button operated injector device, a cartridge and a removable cover according to an embodiment of the present invention;

FIG. 2 is a simplified diagram showing an upper perspective view of the injector device of Fig. 1 with the cover and barrel rendered transparent;

FIG. 3 is a perspective view from below showing the injector device of Fig. 1 with the base removed, and illustrating elements of the needle drive chain;

FIG. 4 is a simplified block diagram showing elements of the needle drive chain of the device of Fig. 1;

FIGs. 5 - 11 are simplified diagrams showing needle drive chains in different implementations of the elements of Fig. 4;

FIG. 18 is a simplified diagram illustrating the cartridge of Fig. 2 with a bent fluid path;

FIG. 20 is a flow chart showing a cartridge filling and replacing procedure according to one embodiment of the present invention; and

FIG. 21 is a flow chart showing a second cartridge filling and replacing procedure according to an embodiment of the present invention.

DESCRIPTION OF SPECIFIC EMBODIMENTS OF THE INVENTION

1. A device for drug injection comprising:

2. The device of claim 1, wherein said fluid path is pre-shaped to contain an angle.

4. The device of claim 1, further comprising a housing (14) and a button (68) to operate said drive chain, the housing (14) being shaped and sized to be held in a one handed grip, the button (68) being positioned to be operated by fingers of said one-handed grip.

5. The device of claim 4, having a front end and a rear end and an adhesive layer for attachment to skin of said patient for said injection.

6. The device of claim 5, the device being attachable and detachable to said patient via said adhesive layer using said one-handed grip and a rolling motion between said front end and said rear end. 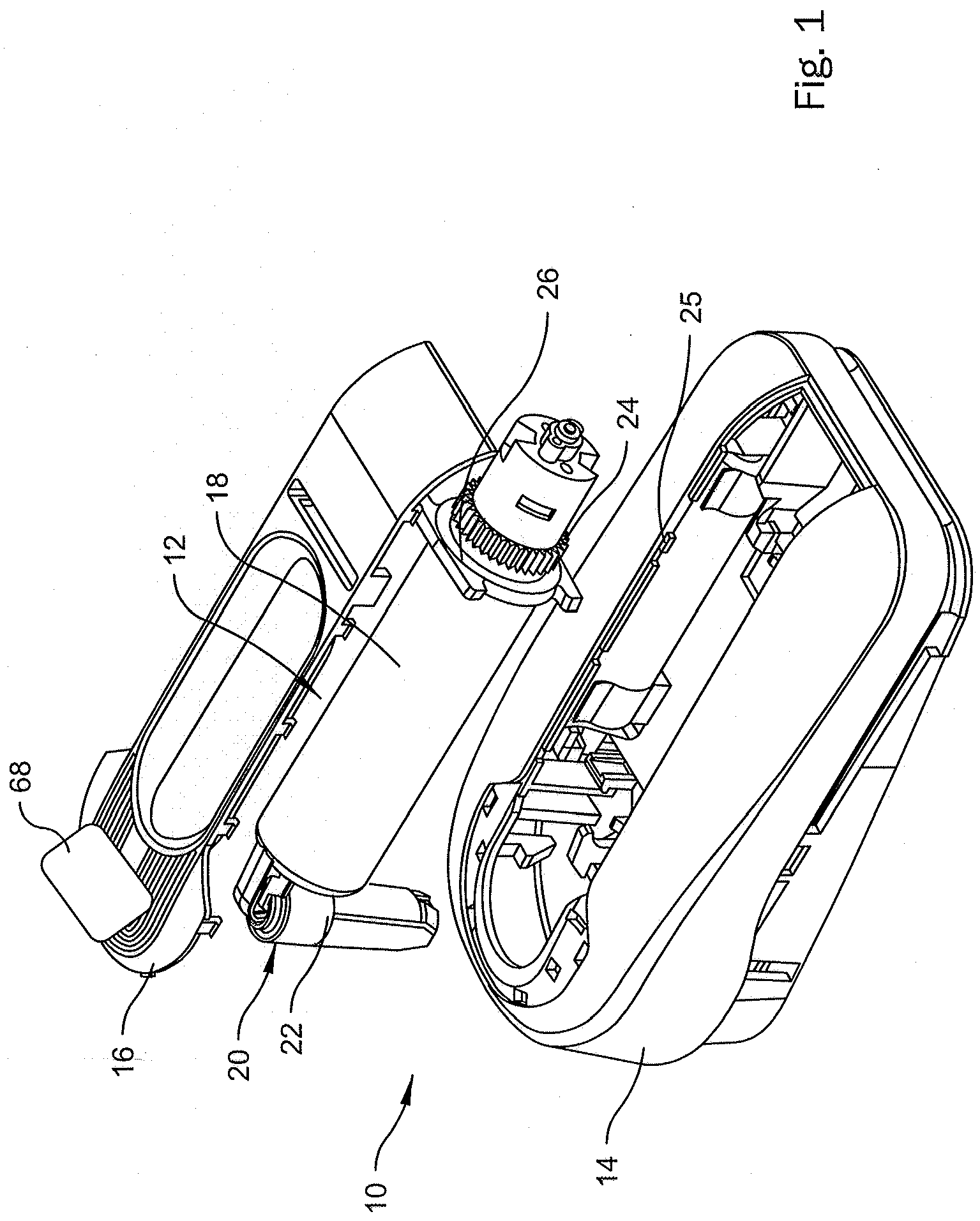 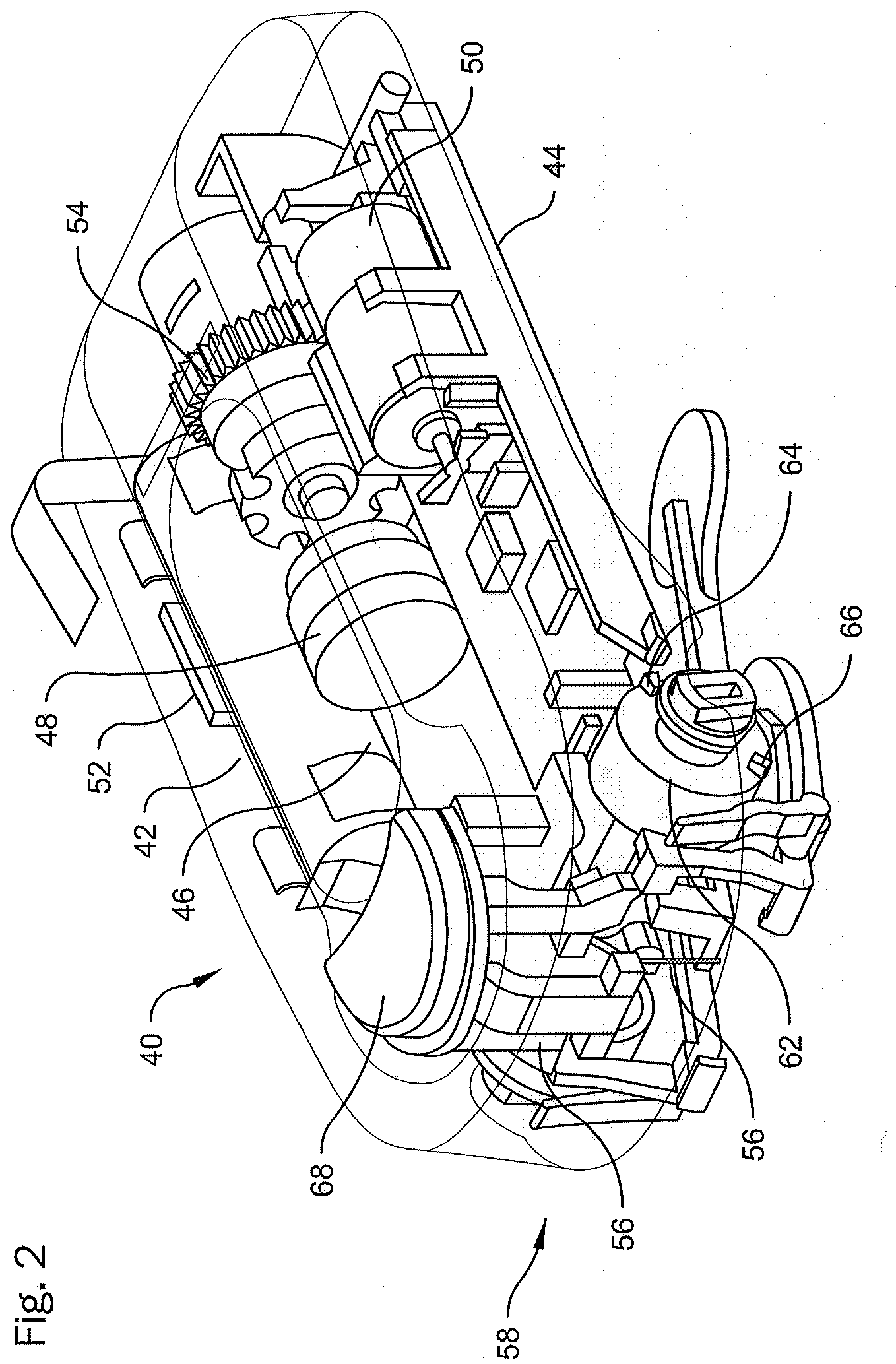 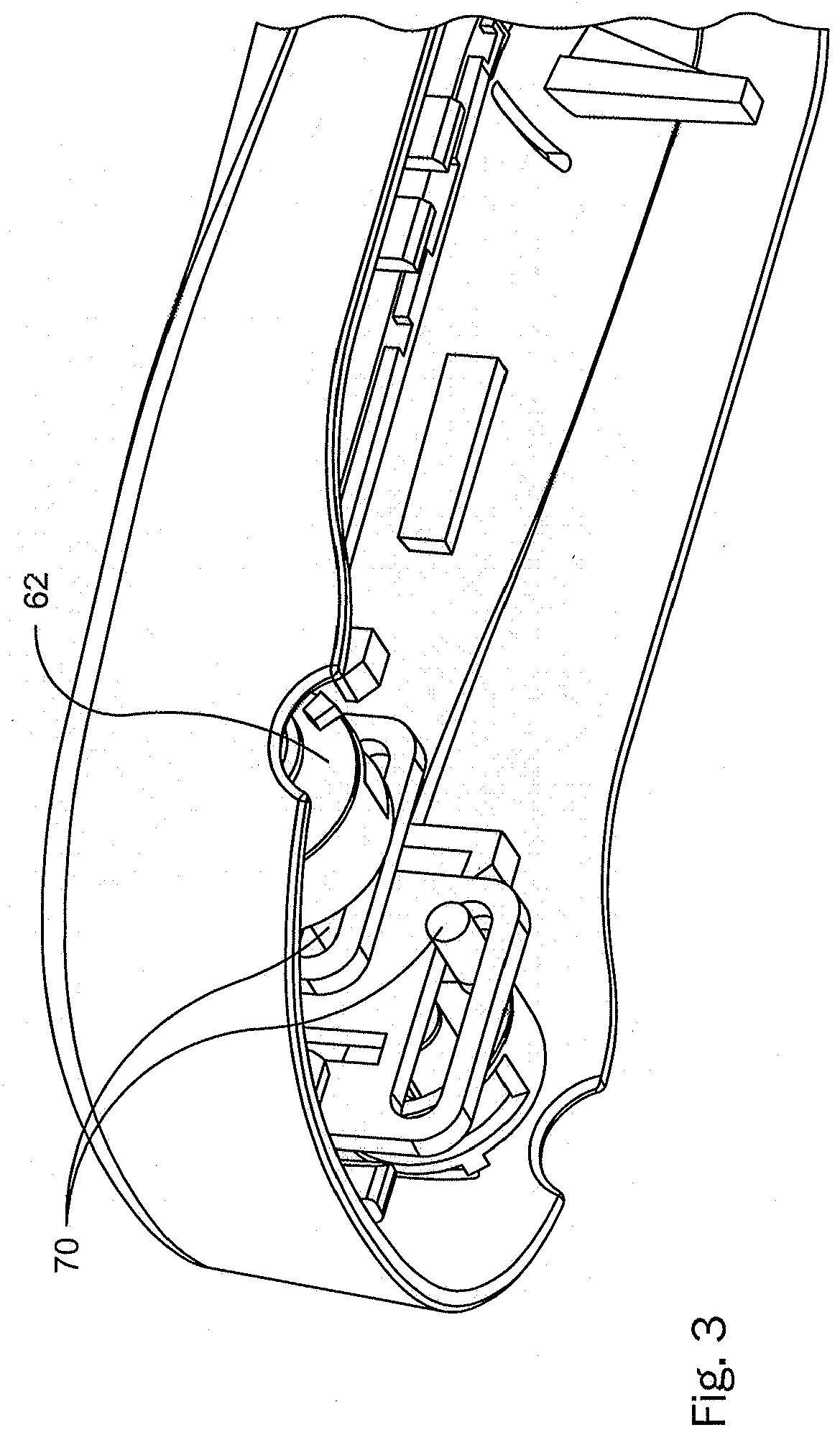 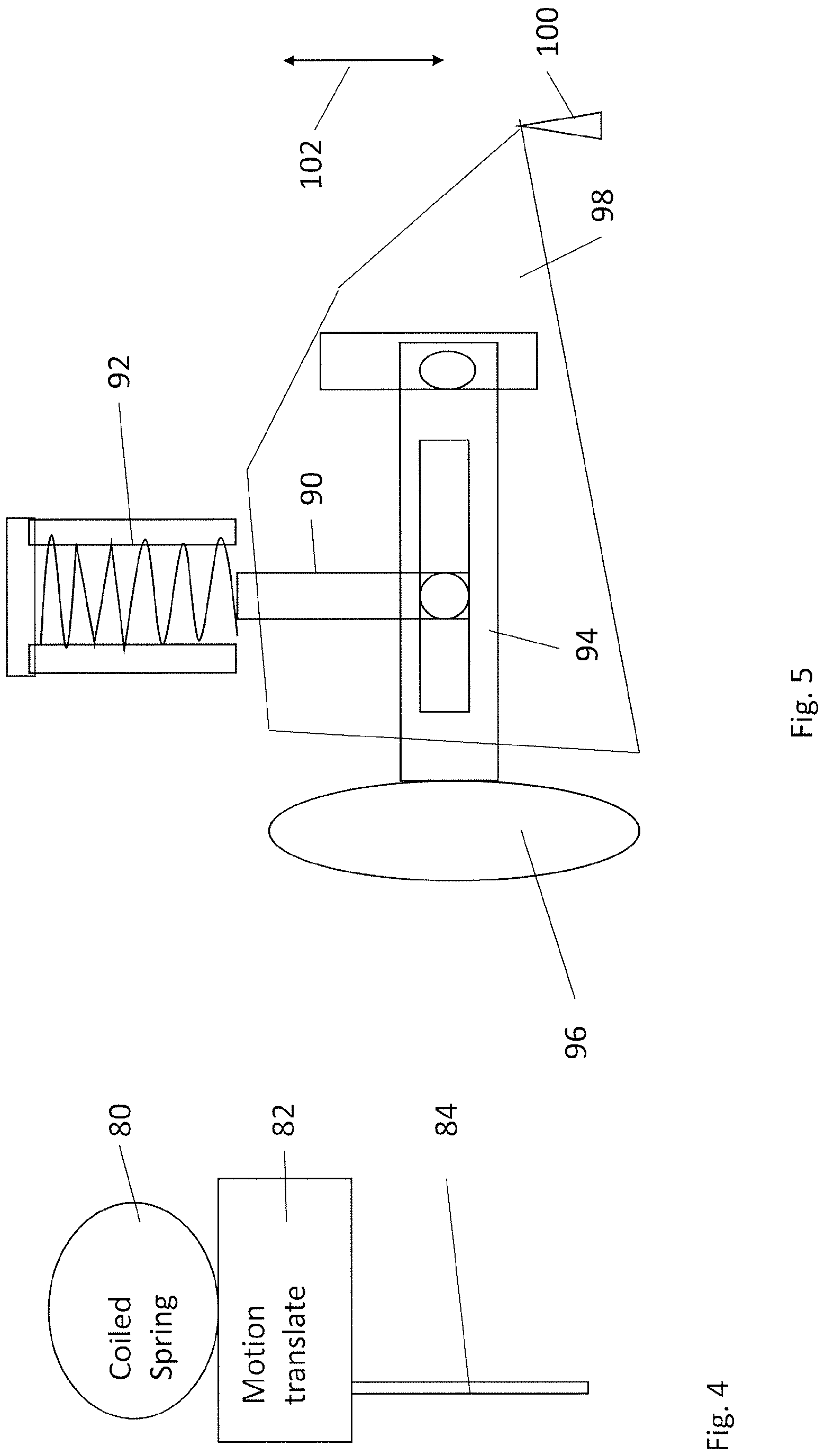 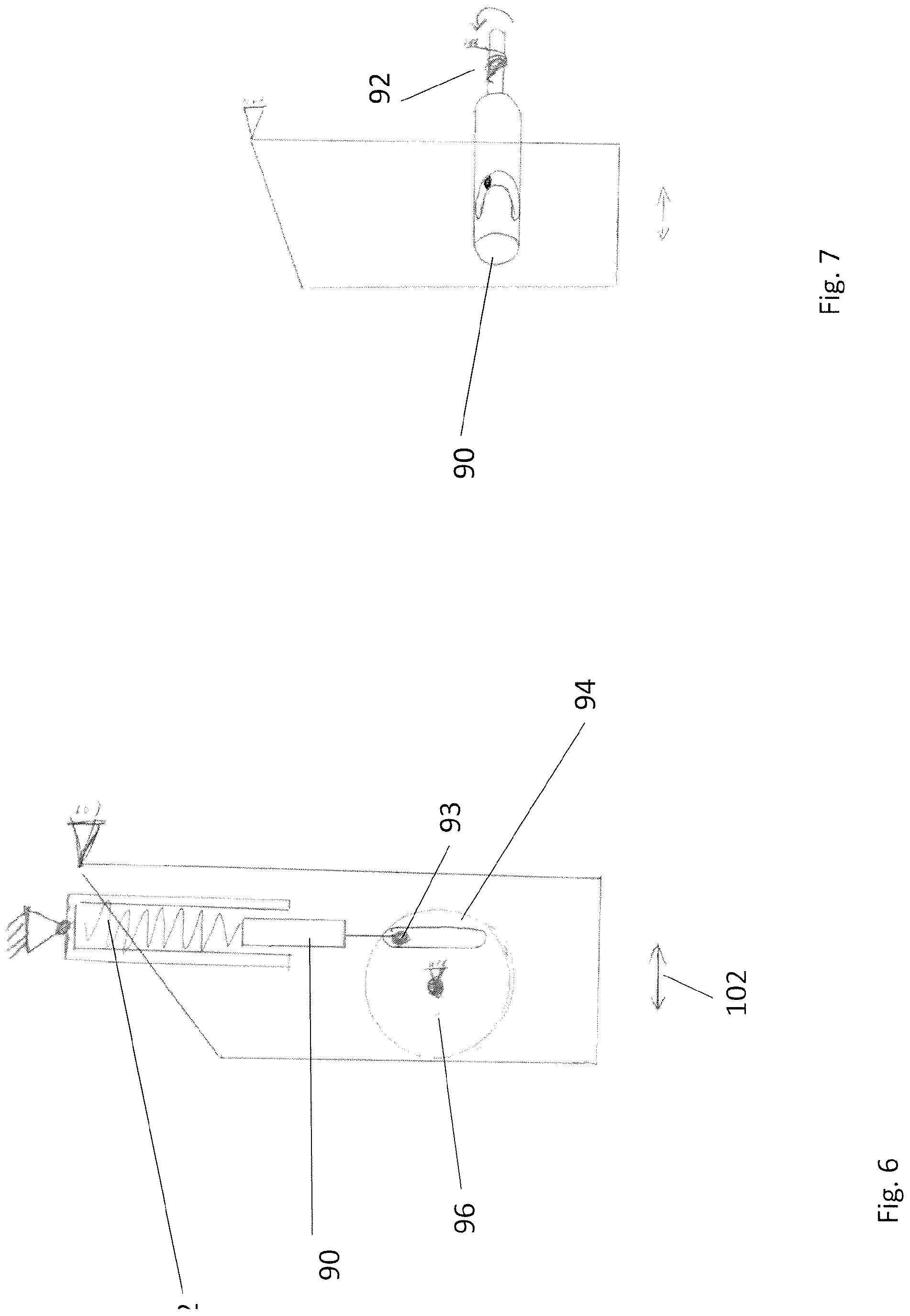 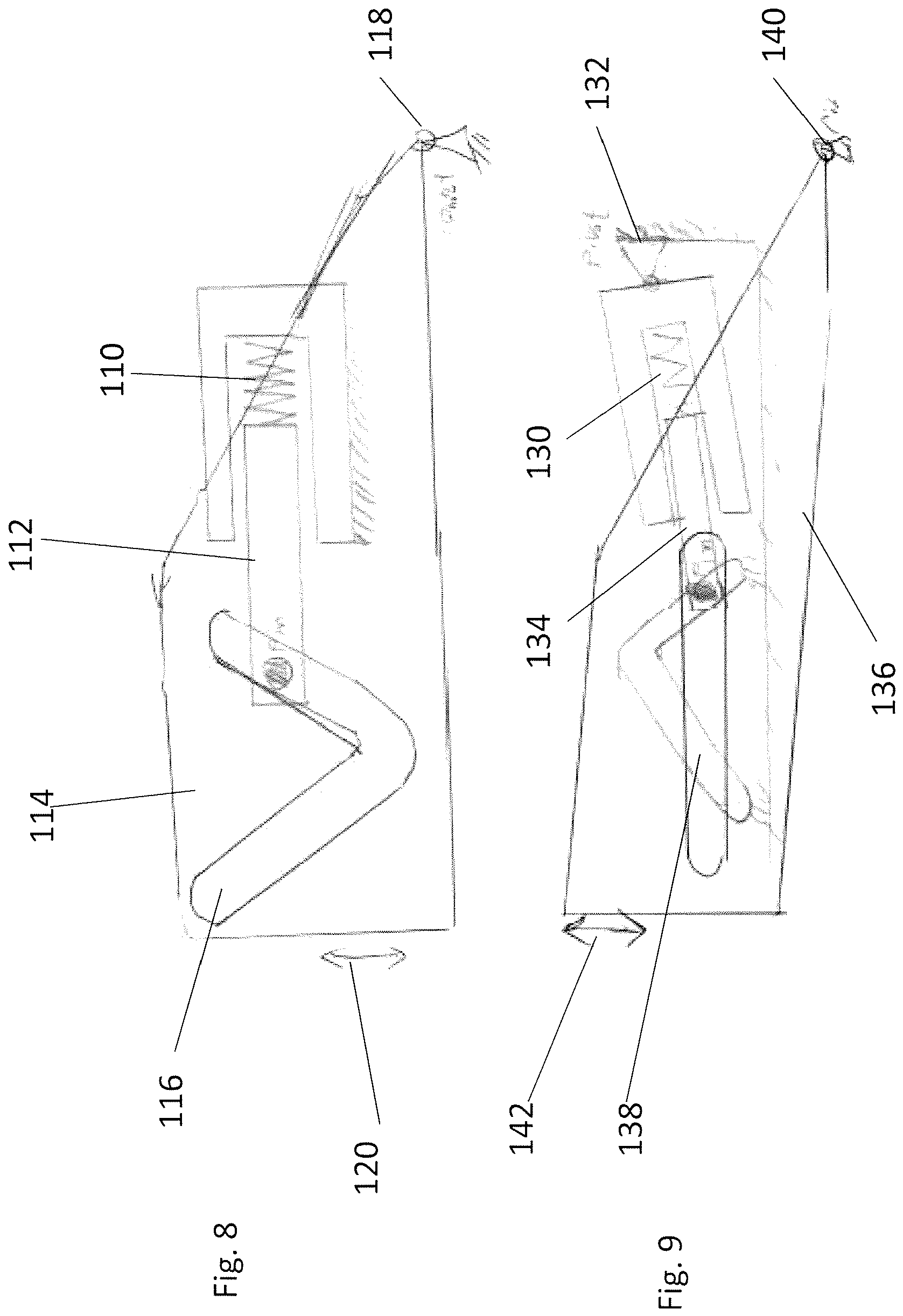 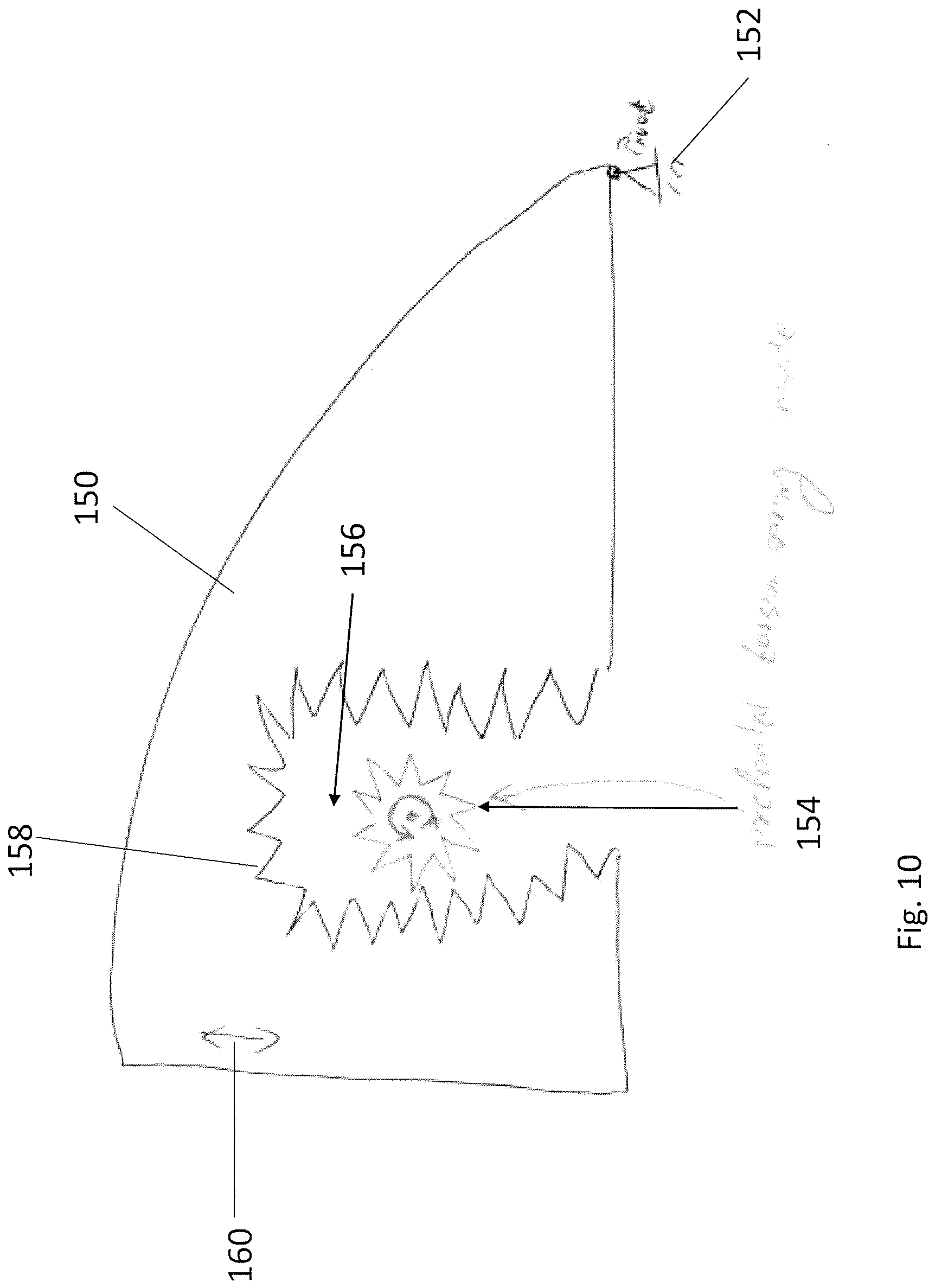 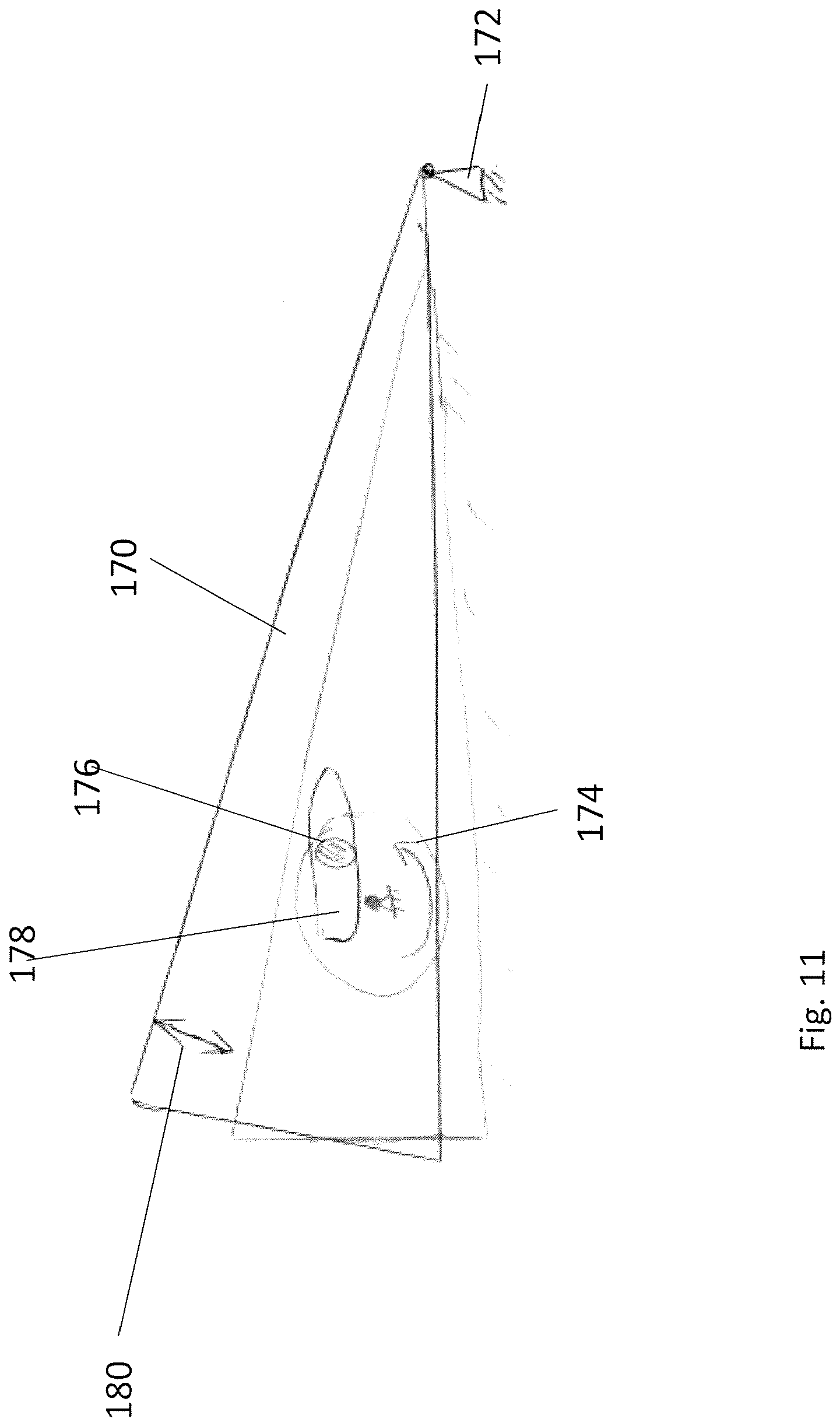 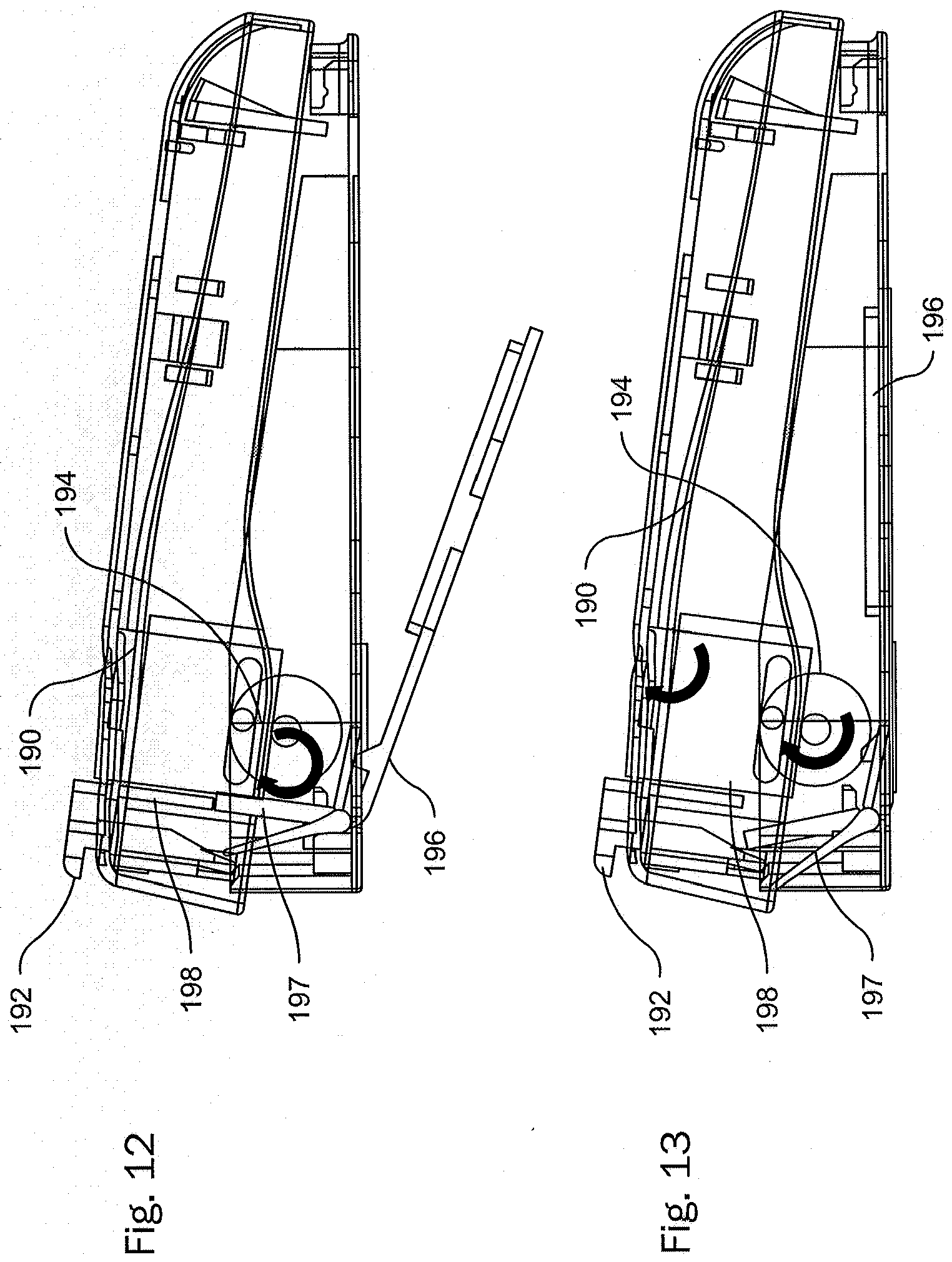 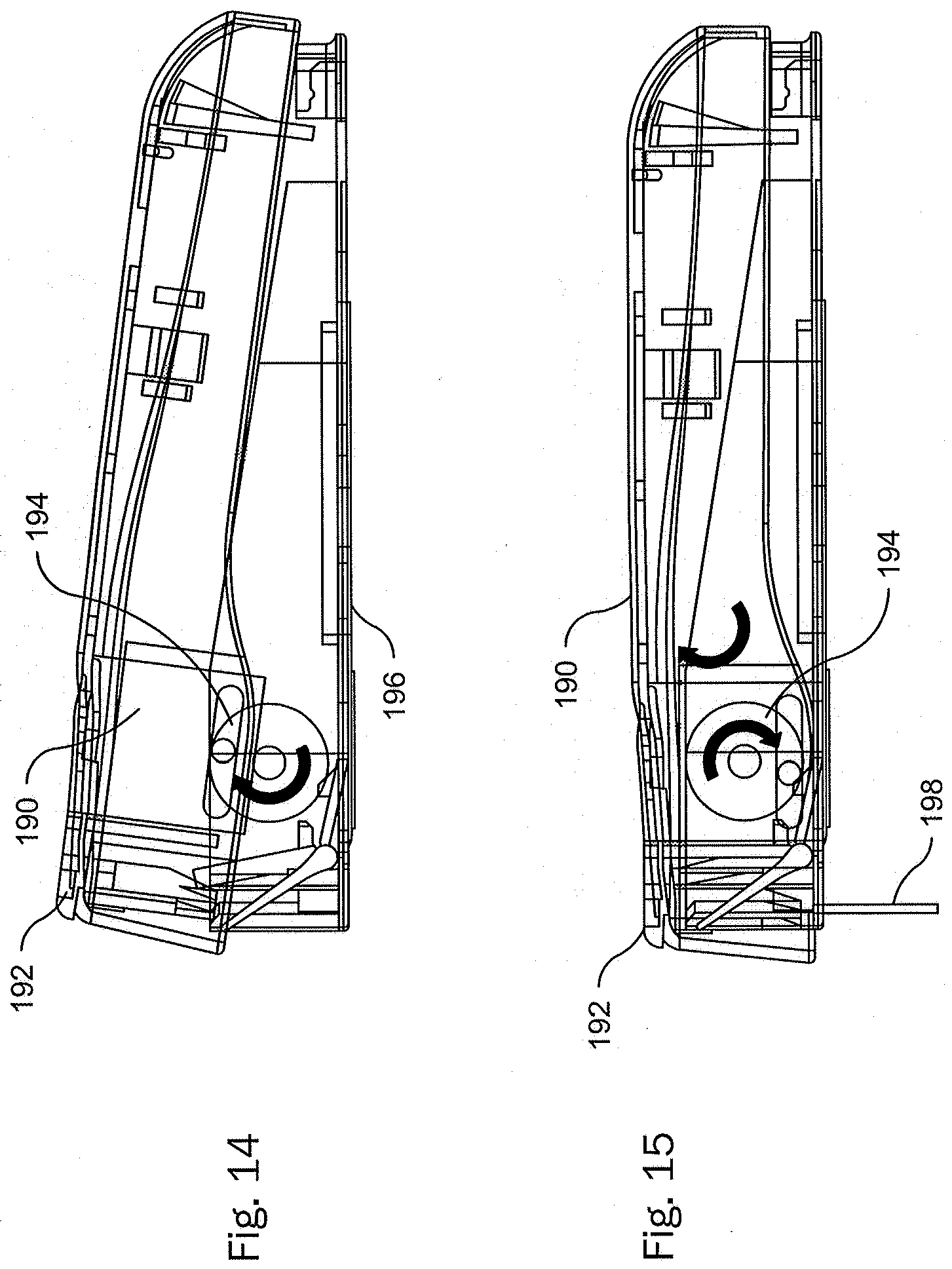 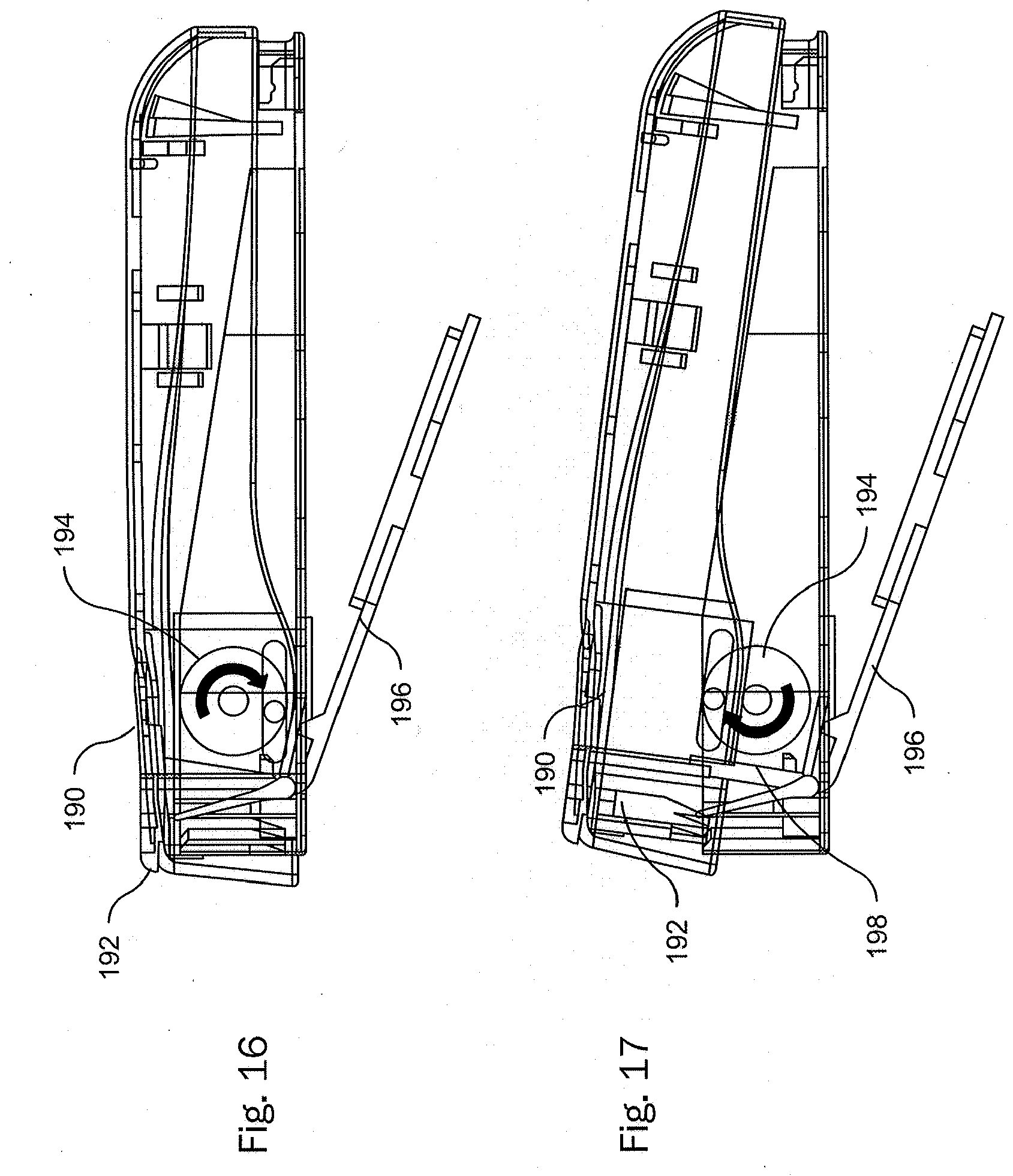 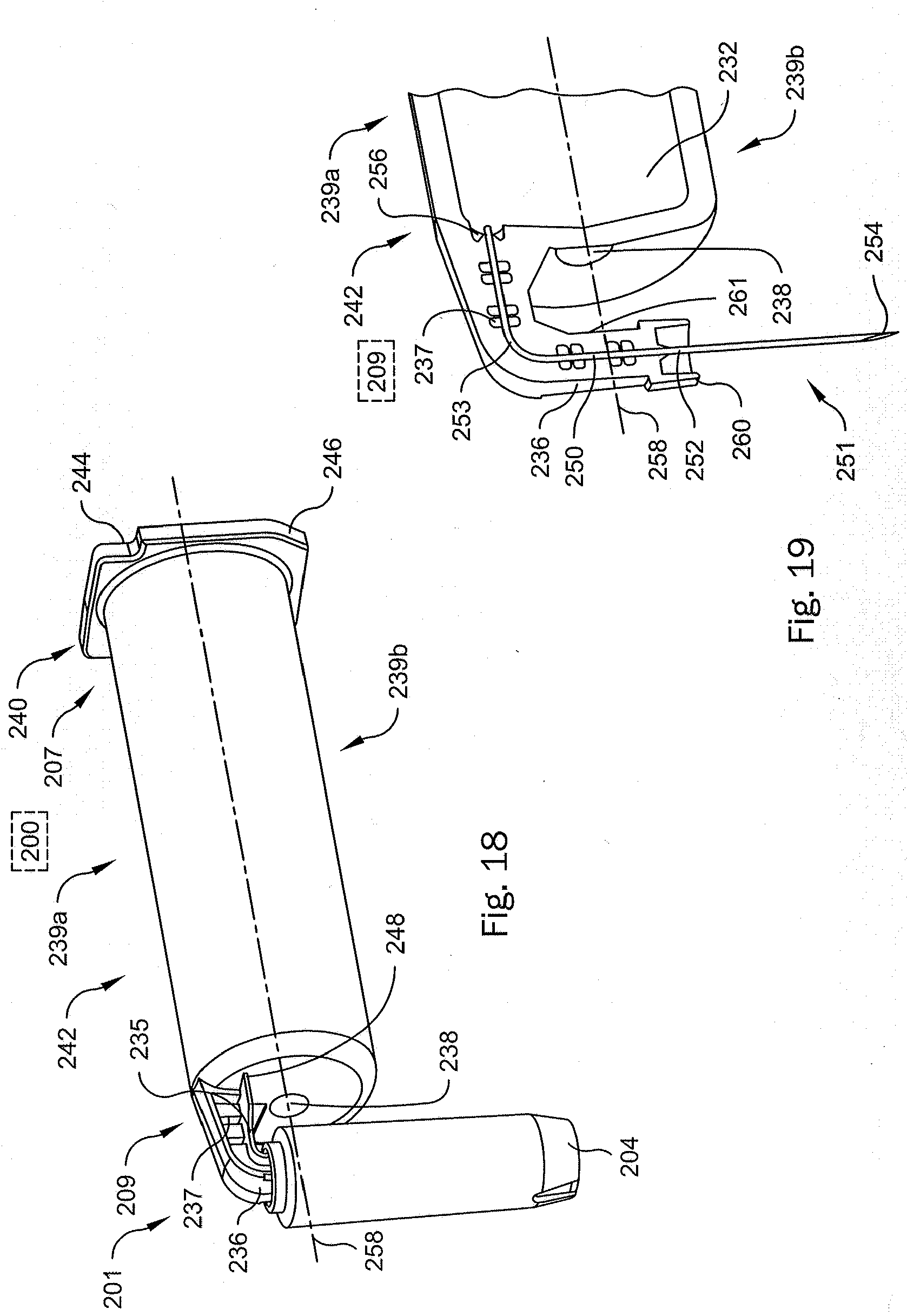 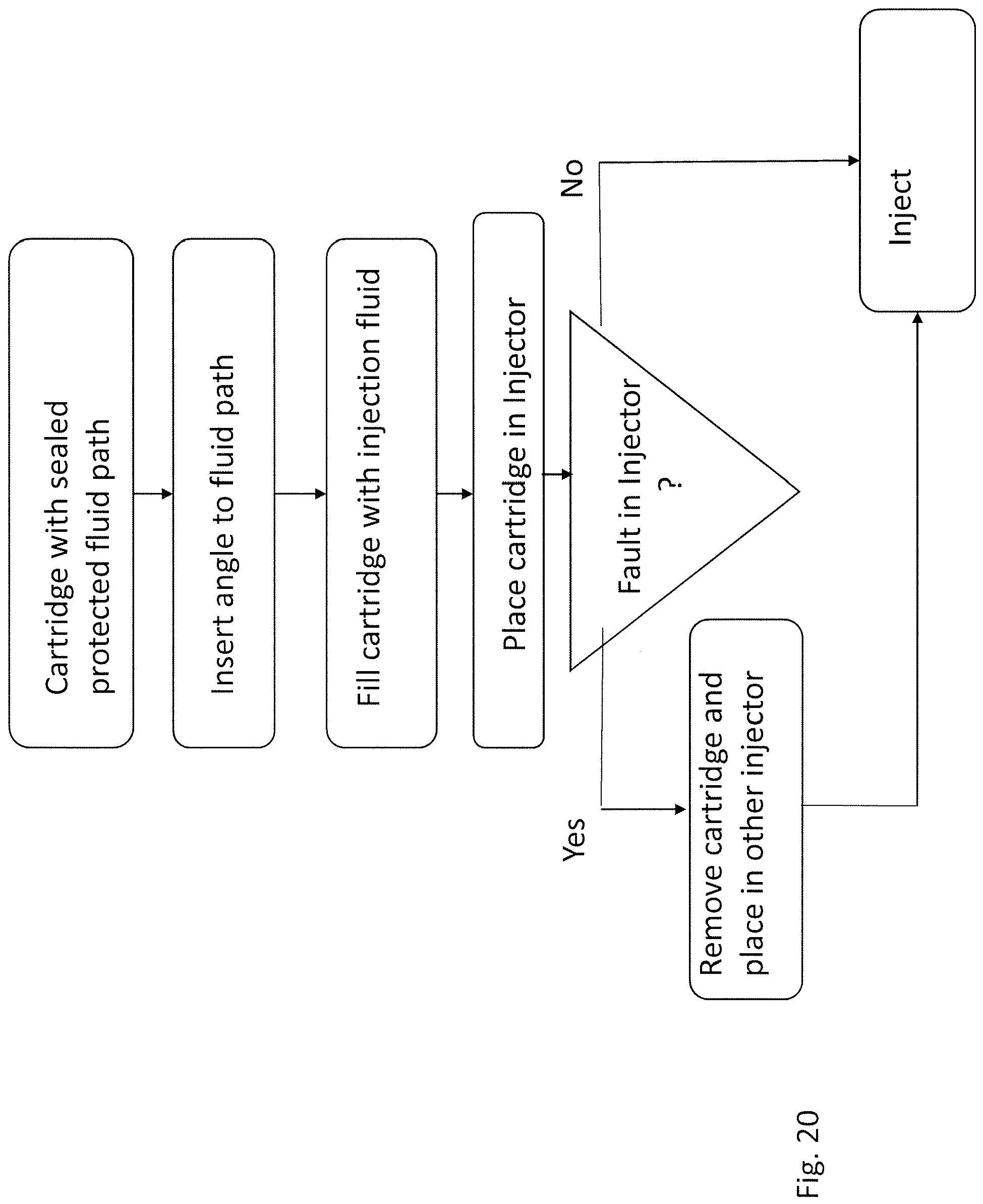 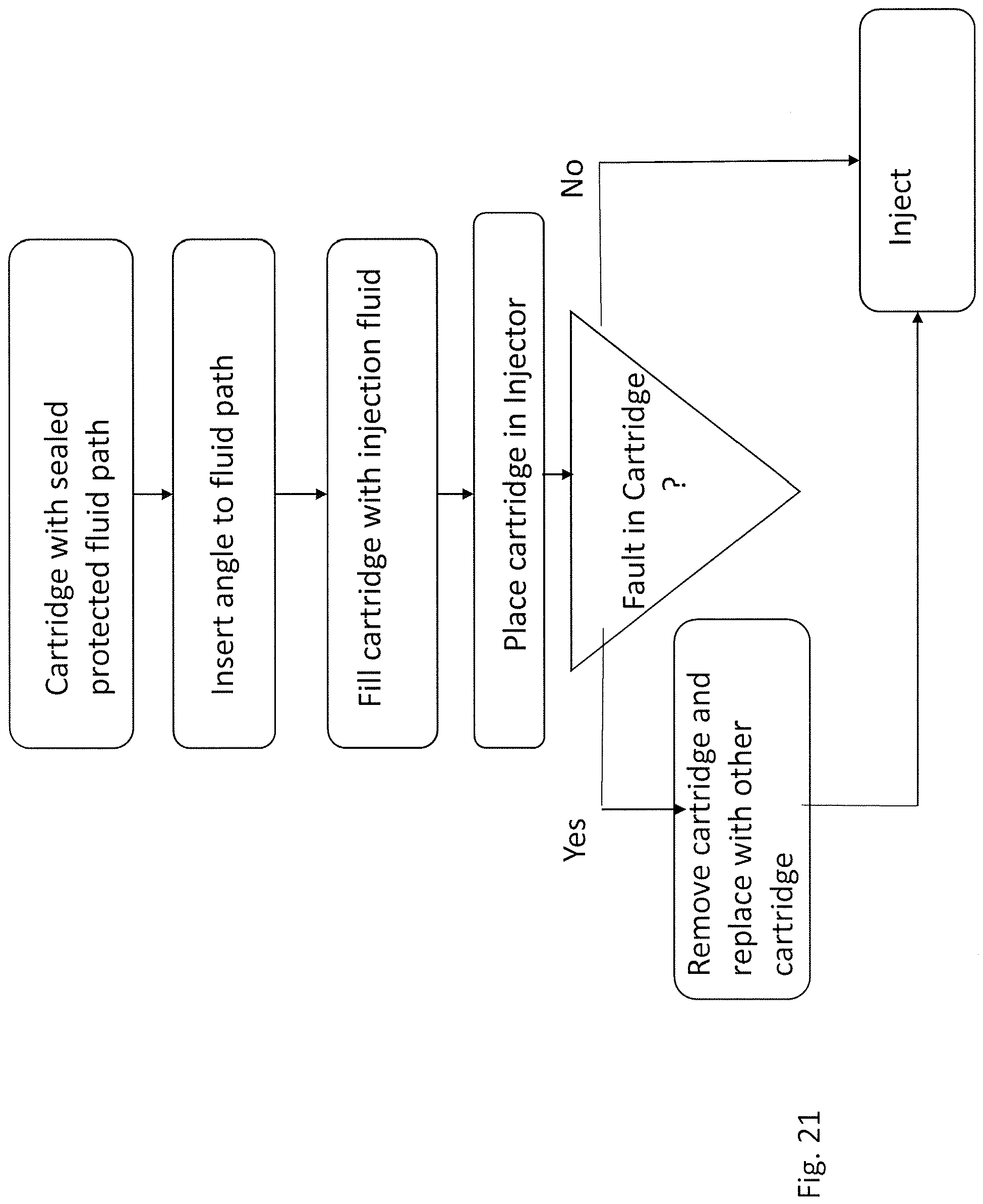