FIG. 2 shows that the conductivity of an electrophoretic medium varies significantly with the inclusion of a charge control agent having an unsaturated tail group;

[0070] 100g of internal phase is prepared by combining the following constituents in a plastic bottle with mixing:
TABLE 1: Components of exemplary electrophoretic media

[0072] S17k formulation #1, the S16k formulation, and the S19k formulation were tested for viscosity and conductivity. The viscosity was measured on an Ares G2 Rheometer (TA Instruments, New Castle, DE) using recessed concentric cylinders in a forced convection oven cooled with evaporating liquid nitrogen. The data in FIG. 1 corresponds to a temperature ramp of 2 °C/min. As seen in FIG. 1, the viscosity of the formulations was quite similar for the range of -20 °C to 25 °C. However, below about -20 °C there was a pronounced increase in the viscosity of the S17k #1 formulation, as opposed to the S19k formulation, which includes an unsaturated tail group. The S16k formulation, which includes an unsaturated tail group of a different weight than the S19k formulations also did not show a marked increase in viscosity around -20 °C (data not shown in FIG. 1).
[0073] The physiochemical performance of the formulations did not appear to be solely due to the interaction between the saturated (or unsaturated) tail groups and the non-polar fluid of the electrophoretic medium (ISOPAR E; ExxonMobil Chemicals, Spring, TX). Rather, the performance of the medium appears to be a complex interaction between the non-polar fluid, the charged particles, and the charge control agents. As shown in FIG. 2, formulations including SOLSPERSE 19k (unsaturated tail) had much higher conductivity than formulations including SOLSPERSE 17k (saturated tail) at similar loading levels. A similar trend was also seen with SOLSPERSE 16k (unsaturated tail) (data not shown in FIG. 2). The marked differences in conductivity between the saturated and unsaturated charge control agents were unexpected because the dominant charge carriers in the electrophoretic medium are the charged pigments, which are loaded at identical levels in all formulations. The observed trends in conductivity may be related to the observed changes in viscosity (FIG. 1) because the increased mobility of the pigments may facilitate alignment of the charged particles with instantaneous electric fields associated with the conductivity measurements. Regardless of the underlying physical reasons, the differences in conductivity between the electrophoretic medium will influence the stability of a resulting electrophoretic display. Accordingly, the actual loading of unsaturated charge control agent was reduced (as compared to the loading of saturated charge control agents) for the analyses described below. The decreased loading is reflected in Table 1, where the unsaturated CCAs are loaded at about half of the amount of the saturated CCAs.

[0074] The internal phases, described in Table 1, were encapsulated in a gelatin/acacia coacervate using techniques similar to those described in U.S. Patent No. 7,170,670. DI water (161.5g) was added to a 500mL jacketed reactor held at 25 °C using a circulating, controlled-temperature bath. Powdered, acid-processed pig-skin gelatin (10.66g) was hydrated by sprinkling the powdered material onto the surface of the water in the reactor and the suspension was allowed to stand for 0.5hr. The solution stirred for 1hr at 100 rpm. During this hour, the temperature was gradually increased from 25 °C to 42.5 °C using a programmable water bath (Huber Ministat 230 with programmable controller). The stirring rate was subsequently increased to 300 rpm. At the higher rotational speed, 162.73g of the internal phase (Example 1) was added to the gelatin solution with a sub-surface addition funnel. The addition was over a period of about one minute. Immediately after addition, the stir rate was increased to 535 rpm, and the solution was stirred for 25min. The capsule size distribution (CSD) was then measured, and the stir rate adjusted to achieve a distribution of 20-70µm, as desired.
[0075] Once the desired CSD was achieved, 377.8g of 42.5 °C water was added, and the stirring rate was adjusted to 675 rpm and 13.7g of solids of acacia was added. The complete suspension, including gelatin, internal phase, and acacia was stirred for 90 min at 675 rpm. Upon completion of stirring, 1.735g of 10% acetic acid was added to the reactor. Over the next 14 hours, the programmable water bath gradually raised the temperature of the mixture to 51 °C and then cooled it to 10 °C. Once the suspension reached 10 °C, 4.86g of 50% glutaraldehyde solution in water was added with stirring, completing the encapsulation of the internal phase. The resulting encapsulated material was isolated by sedimentation, washed with DI water, and classified by sieving, using sieves of varying mesh size. A distribution analysis (Coulter Multisizer) showed that the resulting capsules had a distribution of 30 to 50 µm with a mean size of ∼40 µm.

[0076] The encapsulated electrophoretic medium was transformed into a slurry for lamination as described in U.S. Patent No. 8,199,395. The pH was raised above 8.0 with the addition of a 1% ammonium hydroxide solution. The capsule slurry was then mixed with a polyurethane binder at a ratio of 1 part by weight binder to 8 parts by weight of capsules. Next a 1% hydroxypropylmethylcellulose (HPMC) in water solution was added as a thickener, with a desired weight fraction of 0.002 HPMC in the slurry. Triton X-100 (Sigma-Aldrich) was added as a surfactant, with a desired weight fraction of 0.001. The resultant slurry was stirred for one hour.
[0077] The basic slurry was then bar-coated on to a 127 µm-thick polyester film coated with indium tin oxide (ITO), which will act as an electrode. The coated film was oven dried at 60° C for 15 minutes to produce an electrophoretic medium approximately 30 µm thick containing essentially a single layer of capsules on ITO. From the resulting film, a front-plane laminate (see U.S. Patent No. 6,982,178) was produced by laminating a doped polyurethane adhesive over the capsule layer. The front plane laminate was then laminated to a segmented graphite backplane comprising a layer of graphite on a polyester film to produce experimental electro-optic displays suitable for measurement of their electro-optical properties, i.e., as shown in FIGS. 3 and 4. The finished electro-optic displays were equilibrated for five days at a temperature of 25 °C and a relative humidity of 50%.

[0078] The electro-optical properties of the displays described in Example 3 were measured using a PR-650 SpectraScan Colorimeter. The samples were driven at various voltages, pulse lengths and temperatures. In these tests, the displays were repeatedly driven to their black and white extreme optical states, then driven to either their black or white extreme optical state. The reflectivity of the optical state was measured about 3 seconds after the final drive pulse (to allow certain transient effects to pass) and then 2 minutes after the final drive pulse, and the two measurements compared to detect any image instability (i.e., lack of bistability in the image). The results are shown in FIG. 3 (in which "DS" refers to dark state and "WS" to white state). The data in FIG. 3 correspond to S17k formulations 2 and 3, which are commercial formulations. The performance of S16k and S19k formulations were similar, however the S19k formulation was generally superior to S16k.
[0079] Viewing FIG. 3, it is clear that electrophoretic media including unsaturated charge control agents provide display performance better than electrophoretic media with saturated charge control agents. In particular, the S19k formulation showed brighter white states, darker dark states, and, thus, a wider dynamic range over a range of temperatures. Additionally, the switching speeds, from a white threshold to a black threshold, were faster with formulations including an unsaturated CCA. The increased switching speed was especially evident at low temperatures, e.g., at around 0 °C. Overall, a 55L* dynamic range could be achieved at 0 °C with a 15V, 500ms drive pulse. At 10 °C, a 55L* dynamic range could be achieved with a 15V, 240ms drive pulse, while a 60L* dynamic range could be achieved with a 15V, 500ms drive pulse.
[0080] Additional evidence of the improved performance of electrophoretic media including unsaturated charge control agents is shown in FIG. 4. Figure 4 shows the electro-optic performance of the S16k, S17k #1, and S19k internal phases at -2 °C, 10 °C, and 25 °C across several different pulse lengths. These internal phases were encapsulated at the 500mL scale. As can be seen in FIG. 4 there is a significant difference in dark state performance (filled squares) across all pulse lengths at -2 °C between the unsaturated CCAs (S16k, S19k) and the saturated CCA (S17k). Additionally, at -2 °C the white state performance (filled circles) of the unsaturated CCA formulations is measurably better at longer pulse lengths than the saturated CCA formulations, and about the same at shorted pulse lengths. The differences between the unsaturated and saturated CCA formulations are less pronounced at 10 °C, and almost disappear at 25 °C.

(b) a plurality of first charged particles; and 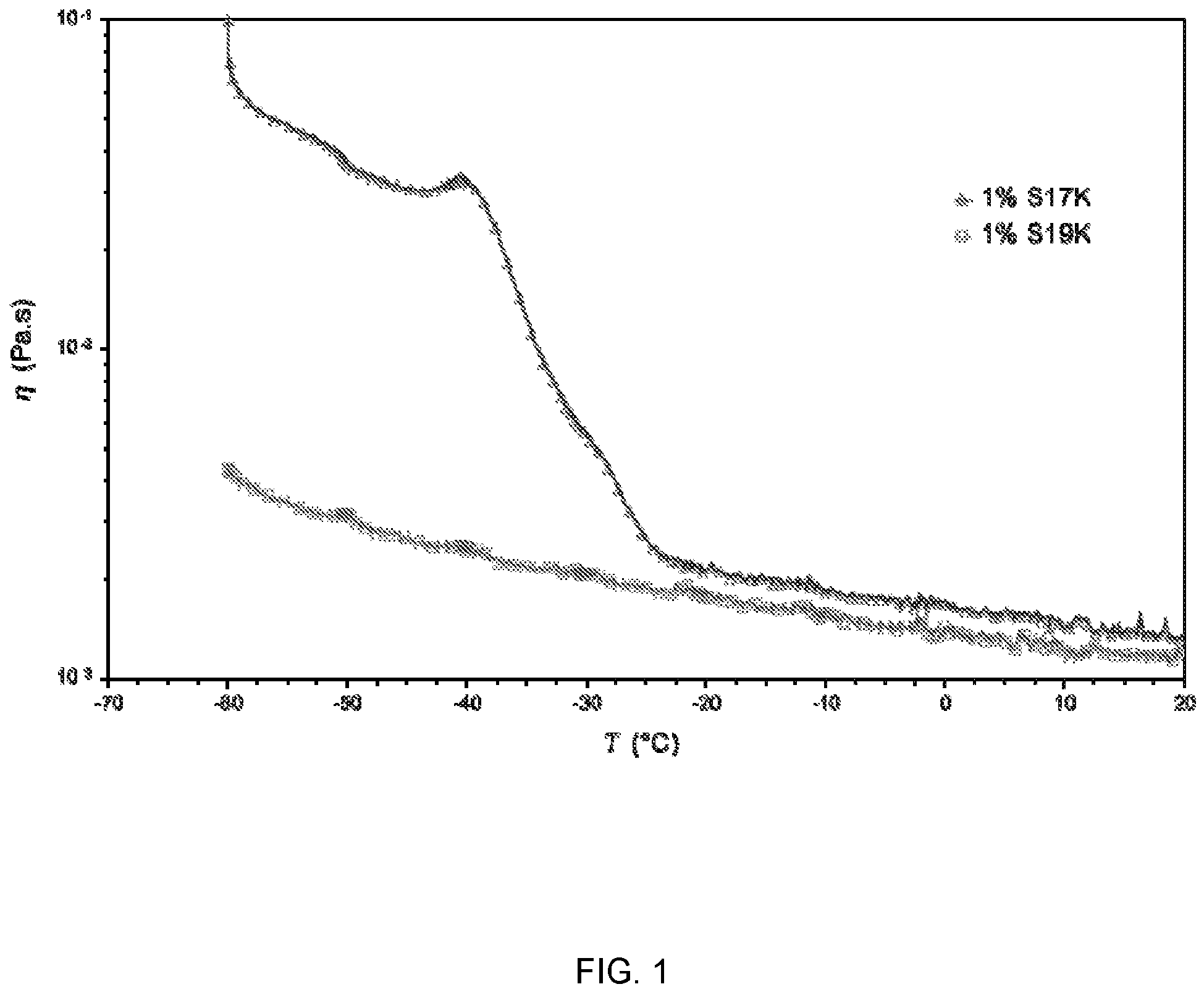 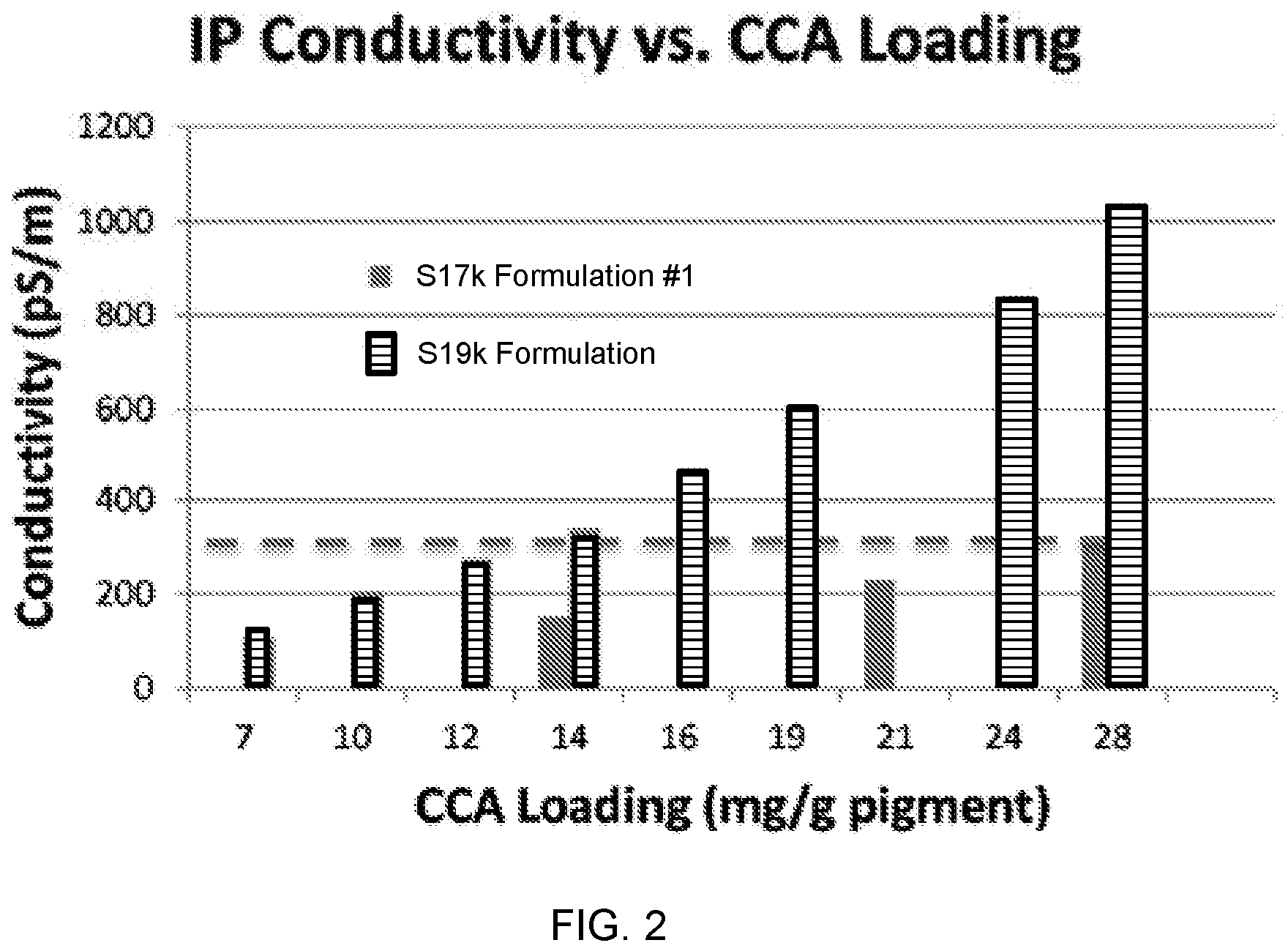 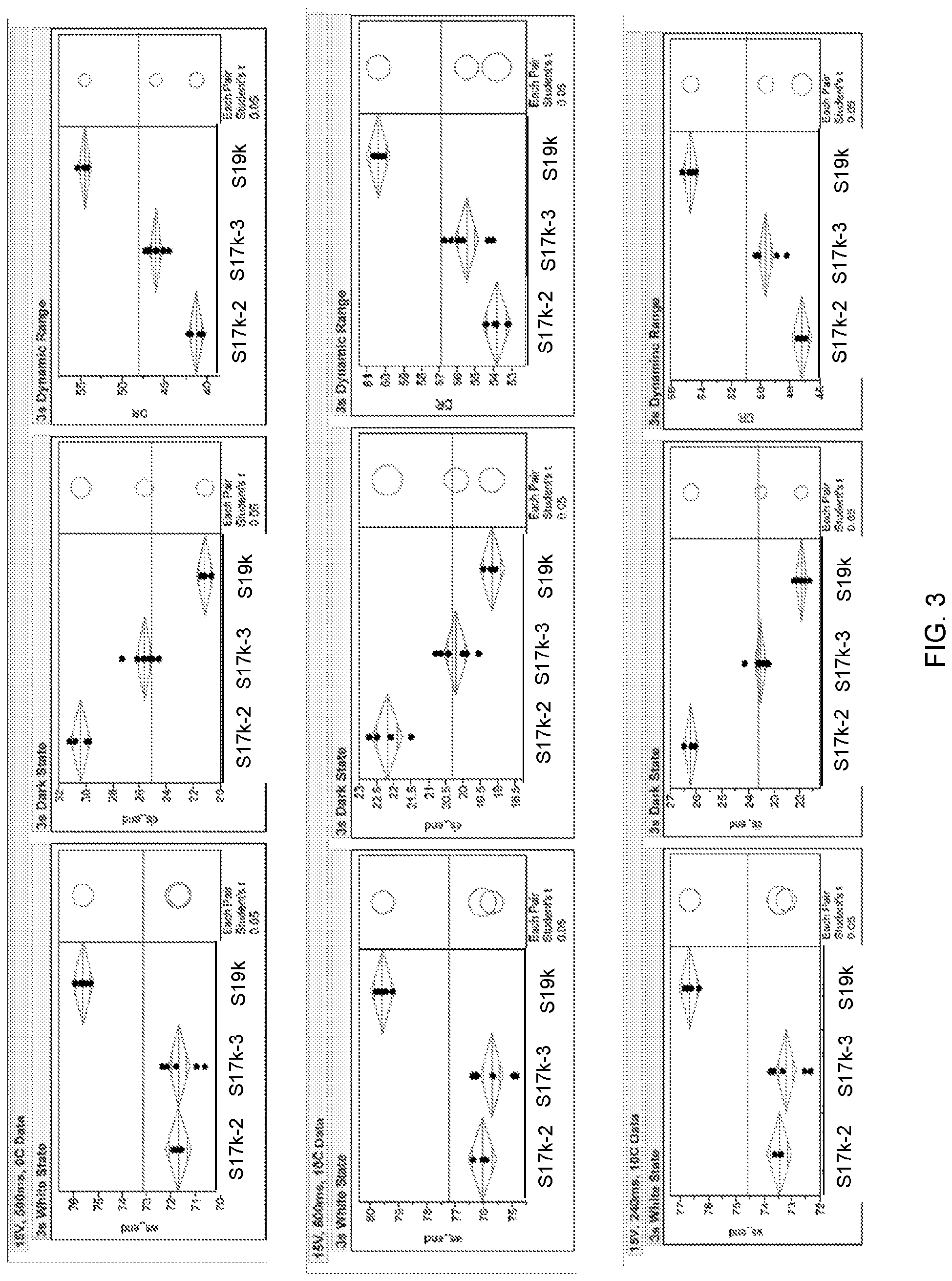 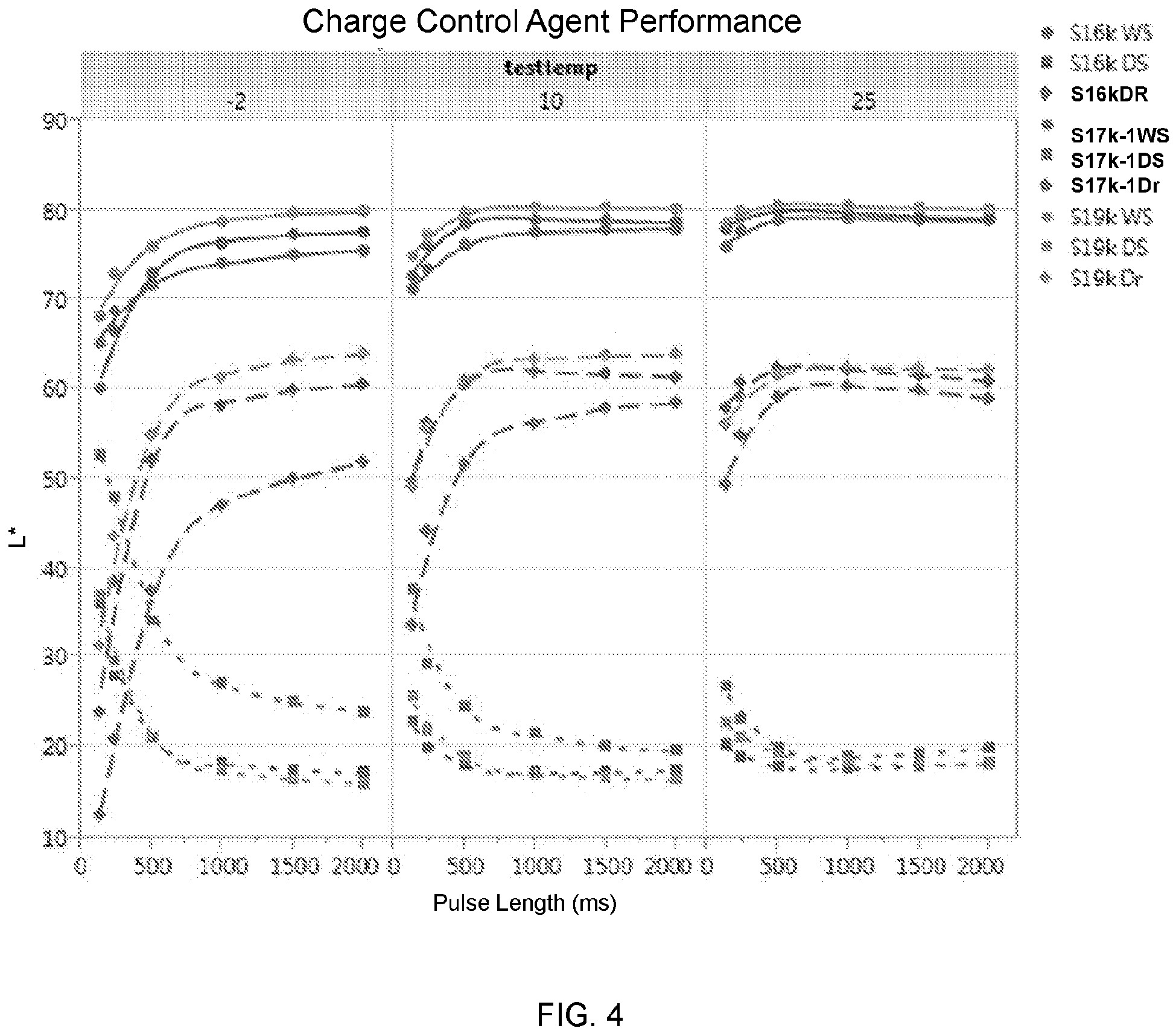