[0001] Electronic marketplaces may implement fault tolerance systems to help ensure application and/or system uptime and reliability. Fault tolerance is generally regarded as the ability to mask, or recover from, erroneous conditions in a system once an error has been detected. Fault tolerance is typically desired for mission critical systems or applications. "Mission critical" typically refers to an indispensable operation that cannot tolerate intervention, compromise, or shutdown during the performance of its primary function, e.g., any computer process that cannot fail during normal business hours. Exemplary mission critical environments may include business-essential process control, finance, health, safety and security. These environments typically monitor, store, support, and communicate data that cannot be lost or corrupted without compromising their core function. Documents EP1516252, US5031089 and US7716667 form part of the background art.
[0002] One exemplary environment where fault tolerance is desirable is in financial markets, and in particular, electronic financial exchanges, such as a futures exchange, such as the Chicago Mercantile Exchange Inc. (CME). Consistent reliable operation is important for ensuring market stability, reliability, and acceptance. Fault tolerance typically describes a computer system or component designed so that, in the event that a component fails, a backup component or procedure can take its place with substantially little or no loss of service. Fault tolerance may be provided with software, hardware, or some combination thereof. For example, in a software implementation, the operating system may provide an interface that allows a programmer to "checkpoint" critical data at pre-determined points within a transaction. In a hardware implementation, the programmer may not need to be aware of the fault tolerant capabilities of the machine. For example, at a hardware level, fault tolerance may be achieved by duplexing each hardware component, e.g., disks are mirrored, multiple processors are "lock-stepped" together, and their outputs are compared for correctness, etc. When an anomaly occurs, the faulty component is determined and taken out of service, but the machine continues to function as usual.
[0003] The level of fault tolerance that is required is typically defined by the needs of the system requirements, i.e., specifications that state acceptable behavior upon error. For example, system requirements may specify whether errors should be detected and corrected or merely detected, and how quickly such actions must be taken.
[0004] One method of providing fault tolerance to a system is to add redundancy to one or more of the critical components of the system. Redundancy describes computer or network system components, such as fans, hard disk drives, servers, operating systems, switches, and/or telecommunication links that are installed to back up primary resources in case primary resources fail. Redundancy schemes include:

A one-for-one (1:1) redundancy scheme includes a standby component for each active component.

A one-plus-one (1+1) redundancy scheme is similar to the one-for-one scheme except that in the case of one-plus-one, traffic is transmitted simultaneously on both active and standby components, where the traffic on the standby is generally ignored. An example of one-plus-one redundancy is the 1+1 SONET/SDH APS scheme that avoids loss of data traffic caused by link failure.

[0005] When providing redundant operation for processing components, voting logic may be used to compare the results of the redundant logic and choose which component is correct. For example, in triple mode redundancy, three redundant components may be provided wherein if the result of one component fails to match the other two, which match each other, the ultimate result will be that of the two components that matched.
[0006] A well-known example of a redundant system is the redundant array of independent disks ("RAID"), which involves of storing the same data in different places (thus, redundantly) on multiple hard disks. By placing data on multiple disks, I/O (input/output) operations can overlap in a balanced way, improving performance. Since multiple disks increase the mean time between failures (MTBF), storing data redundantly also increases fault tolerance. A RAID appears to the operating system to be a single logical hard disk. RAID employs the technique of disk striping, which involves partitioning each drive's storage space into units ranging from a sector (e.g., 512 bytes) up to several megabytes. The stripes of all the disks are interleaved and addressed in order. In a single-user system where large records (such as medical or other scientific images) are stored, the stripes are typically set up to be small (perhaps 512 bytes) so that a single record spans all disks and can be accessed quickly by reading all disks at the same time. In a multi-user system, better performance requires establishing a stripe wide enough to hold the typical or maximum size record. This allows overlapped disk I/O across drives.
[0007] There are several types of RAID systems:

RAID-0 has striping but no redundancy of data. It offers very good performance but no fault tolerance.

RAID-1 is also known as disk mirroring and consists of at least two drives that duplicate the storage of data. There is no striping. Read performance is improved since either disk can be read at the same time. Write performance is the same as for single disk storage. RAID-1 provides high performance and very good fault tolerance in a multi-user system.

RAID-2 uses striping across disks with some disks storing error checking and correcting (ECC) information. It has no advantage over RAID-3, discussed next.

RAID-3 uses striping and dedicates one drive to storing parity information. The embedded error checking (ECC) information is used to detect errors. Data recovery is accomplished by calculating the exclusive OR (XOR) of the information recorded on the other drives. Since an I/O operation addresses all drives at the same time, RAID-3 cannot overlap I/O. For this reason, RAID-3 may be best applied in single-user systems with long record appli cati ons.

RAID-4 uses large stripes and allows reading records from any single drive and the use of overlapped I/O for read operations. Since all write operations have to update the parity drive, no I/O overlapping is possible. RAID-4 offers no advantage over RAID-5, discussed next.

RAID-5 includes a rotating parity array, thus addressing the write limitation in RAID-4. Thus, all read and write operations can be overlapped. RAID-5 stores parity information but not redundant data (but parity information can be used to reconstruct data). RAID-5 requires at least three and usually five disks for the array, and is most useful in multi-user systems in which performance is not critical or which perform few write operations.

RAID-6 is similar to RAID-5 but includes a second parity scheme that is distributed across different drives and thus offers extremely high fault and drive failure tolerance.

RAID-7 includes a real-time embedded operating system as a controller, caching via a high-speed bus, and other characteristics of a stand-alone computer.

RAID-10 is the result of combining RAID-0 and RAID-1 and offers higher performance than RAID-1 but at a much higher cost. There are two subtypes, RAID-0+1 and RAID-1+0. In RAID-0+1, data is organized as stripes across multiple disks, and then the striped disk sets are mirrored. In RAID-1+0, the data is mirrored and the mirrors are striped.

RAID-50 (or RAID-5+0) consists of a series of RAID-5 groups and striped in RAID-0 fashion to improve RAID-5 performance without reducing data protection.

RAID-53 (or RAID-5+3) uses striping (in RAID-0 style) for RAID-3's virtual disk blocks. This offers higher performance than RAID-3 but at much higher cost.

RAID-S (also known as Parity RAID) is an alternate, proprietary method for striped parity RAID from EMC Symmetrix and includes a high-speed disk cache on the disk array.

Fig. 1 depicts an illustrative computer network system that may be used to implement aspects of the disclosed embodiments.

Fig. 2 depicts an illustrative embodiment of a general computer system that may be used to implement aspects of the disclosed embodiments.

Fig. 3 depicts an example market order message management system that may be used to implement aspects of the disclosed embodiments.

Fig. 4 depicts an example system running multiple applications on multiple machines, according to one example embodiment.

Fig. 5 depicts another example system running multiple applications on multiple machines, according to one example embodiment.

Fig. 6 depicts an example data structure for an instance that may be used to implement aspects of the disclosed embodiments.

Fig. 11 depicts an example flowchart for implementing a fault tolerance system according to the disclosed embodiments.

Fig. 12 depicts another example flowchart for implementing a fault tolerance system according to the disclosed embodiments.

Fig. 13 illustrates an example graph of a load of an instance recovering an orphaned job in a fault tolerance system according to the disclosed embodiments.

1. A computer implemented method for providing fault tolerance to a plurality of instances of an application in a system, wherein one or more instances may be failing and jobs assigned to the failing instances are orphaned jobs, the system further including a plurality of surviving instances which are not failing, the method comprising:

determining, by a fault tolerance system for each of the surviving instances, an aggregate load by:

retrieving a job load of each job assigned to the respective surviving instance; and

summing the job loads of all of the jobs assigned to the respective surviving instance; and

retrieving, by the fault tolerance system, a job load of each orphaned job;

calculating, by the fault tolerance system, for each selected surviving instance:

a load discount, if the surviving instance is already performing jobs that are similar in nature to the orphaned job; or

a load penalty, if the surviving instance is performing completely different jobs than the orphaned job,

of each orphaned job if it were to be accepted by the respective surviving instance; and

accepting, by one of the subset of surviving instances, an orphaned job of the plurality of orphaned jobs for which it was selected based upon:

(i) the job loads of the orphaned jobs;

(ii) the load discounts or penalties of the orphaned job calculated for the respective surviving instance; and

(iii) the aggregate loads of the surviving instances,

assigning the orphaned job to the surviving instance with the highest available capacity by the fault tolerance system.

wherein the orphaned job results from a terminating event; and

calculating a recovery load of the orphaned job which defines how computationally expensive an orphaned job is to recover for an instance; and 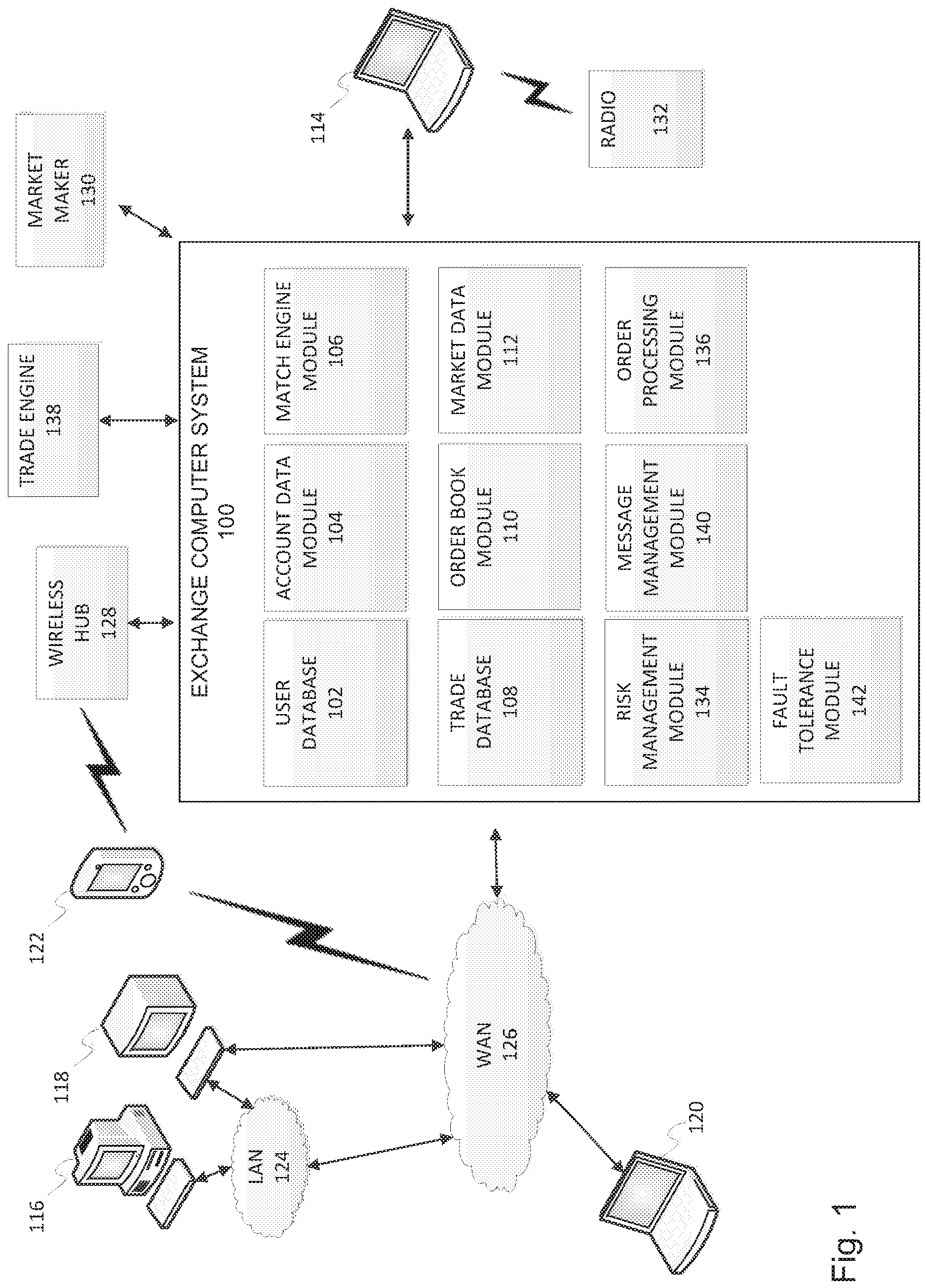 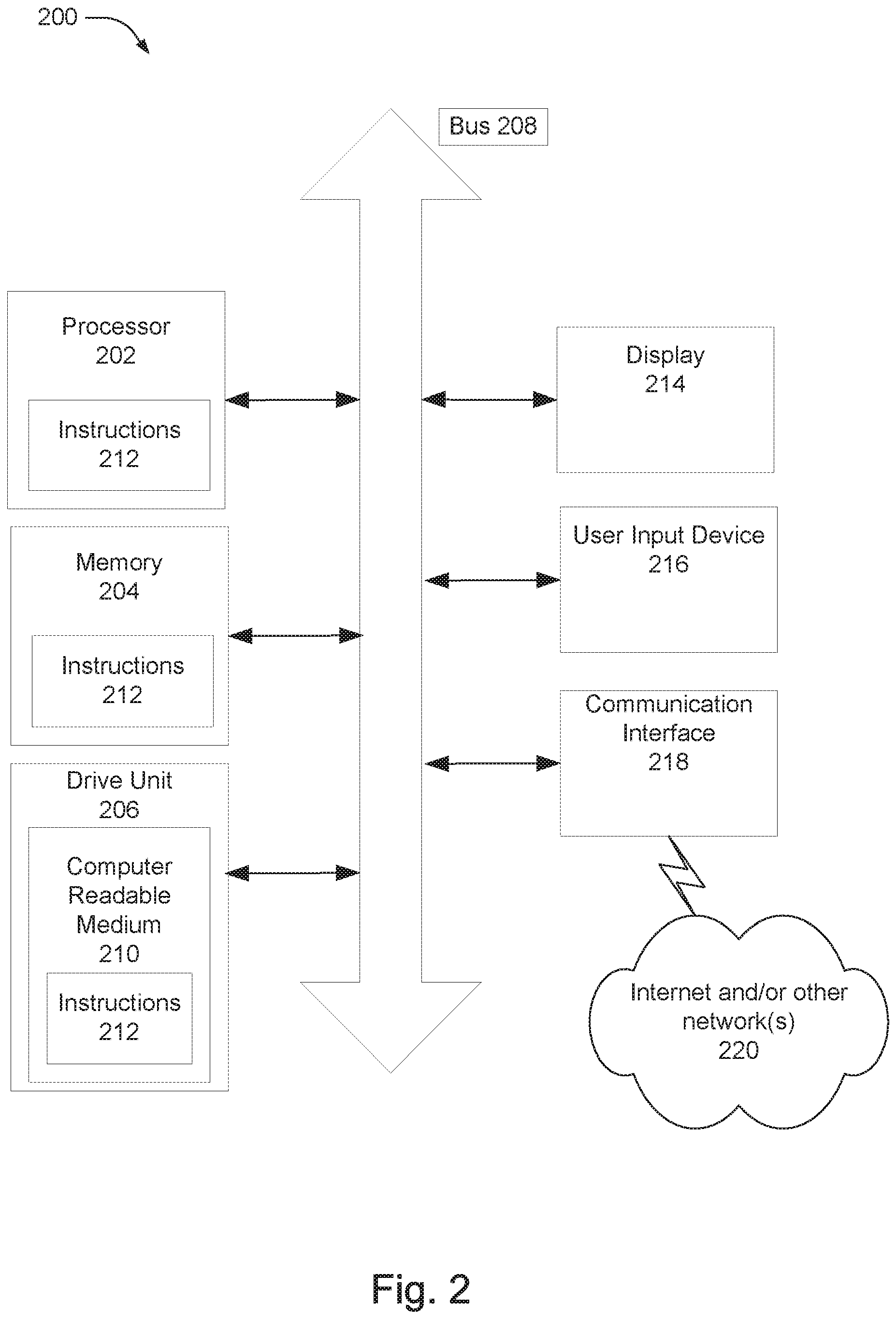 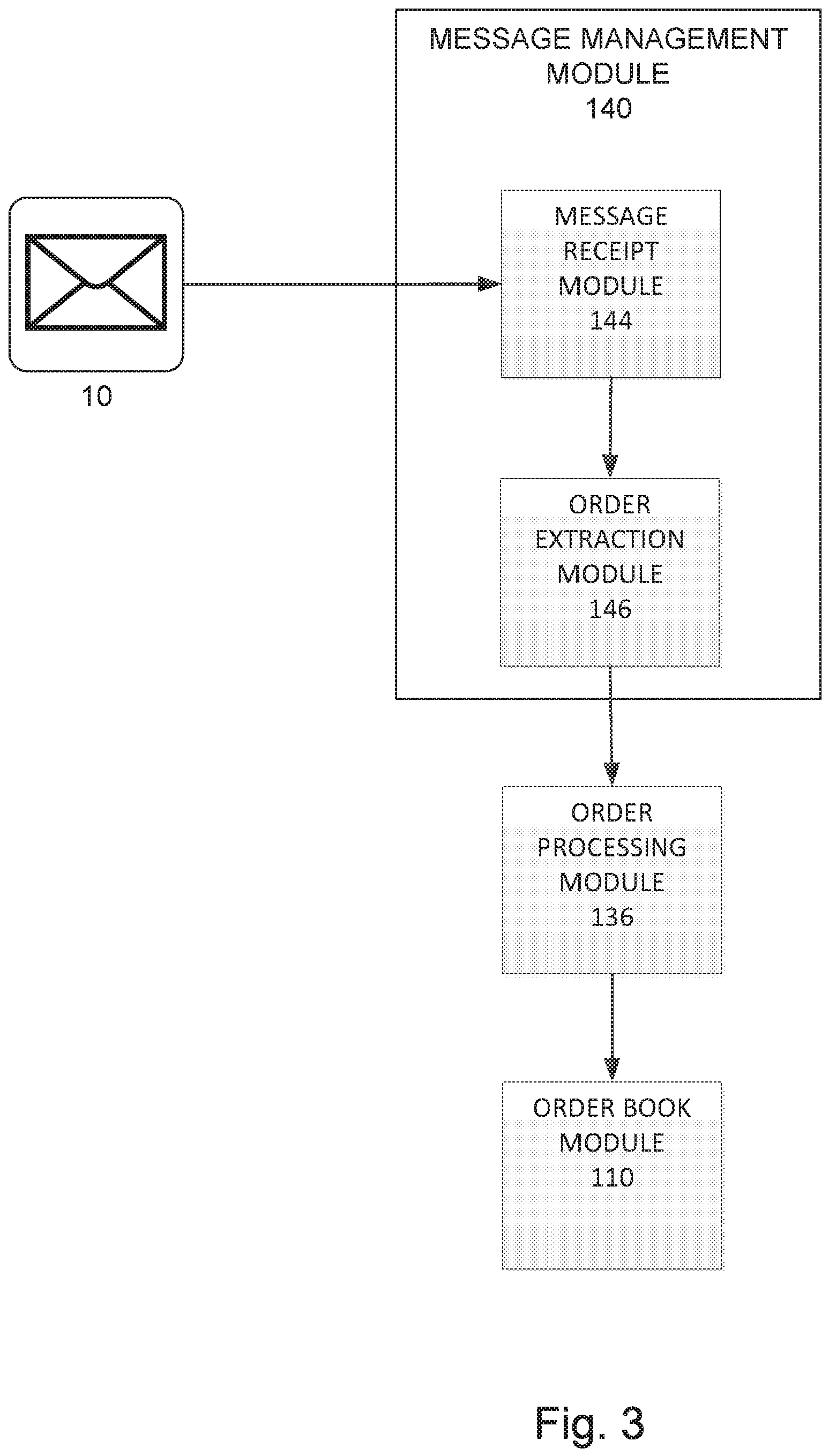 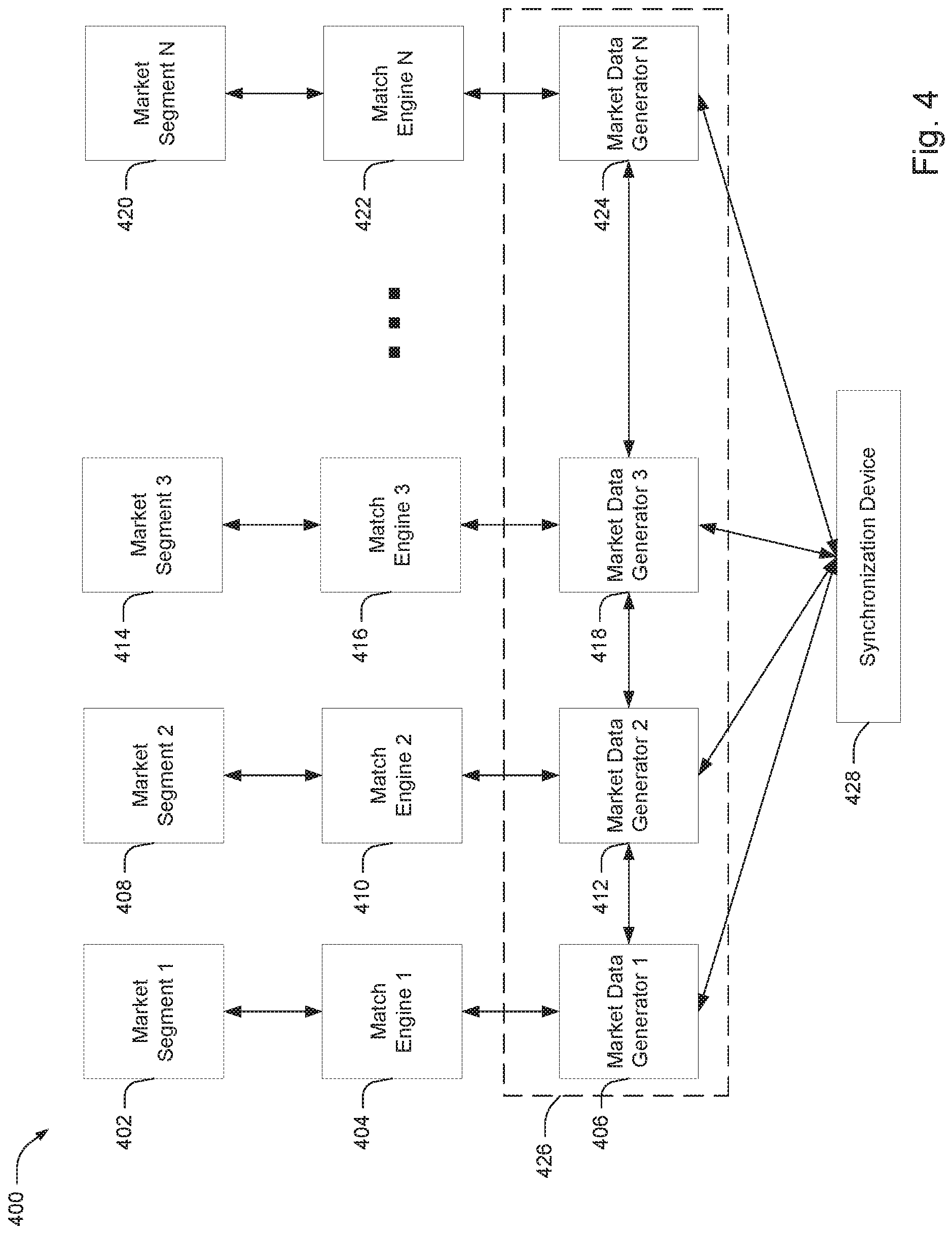 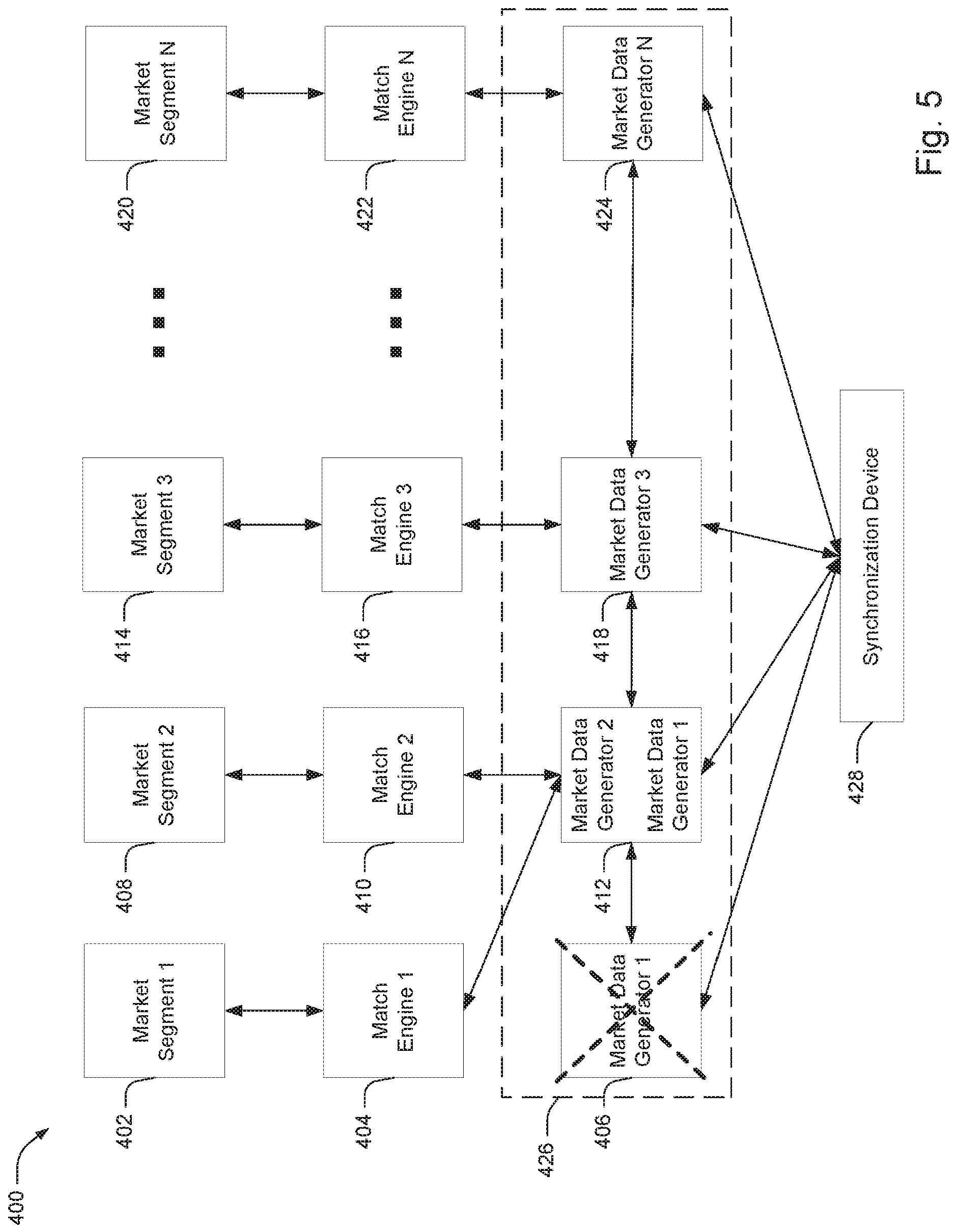 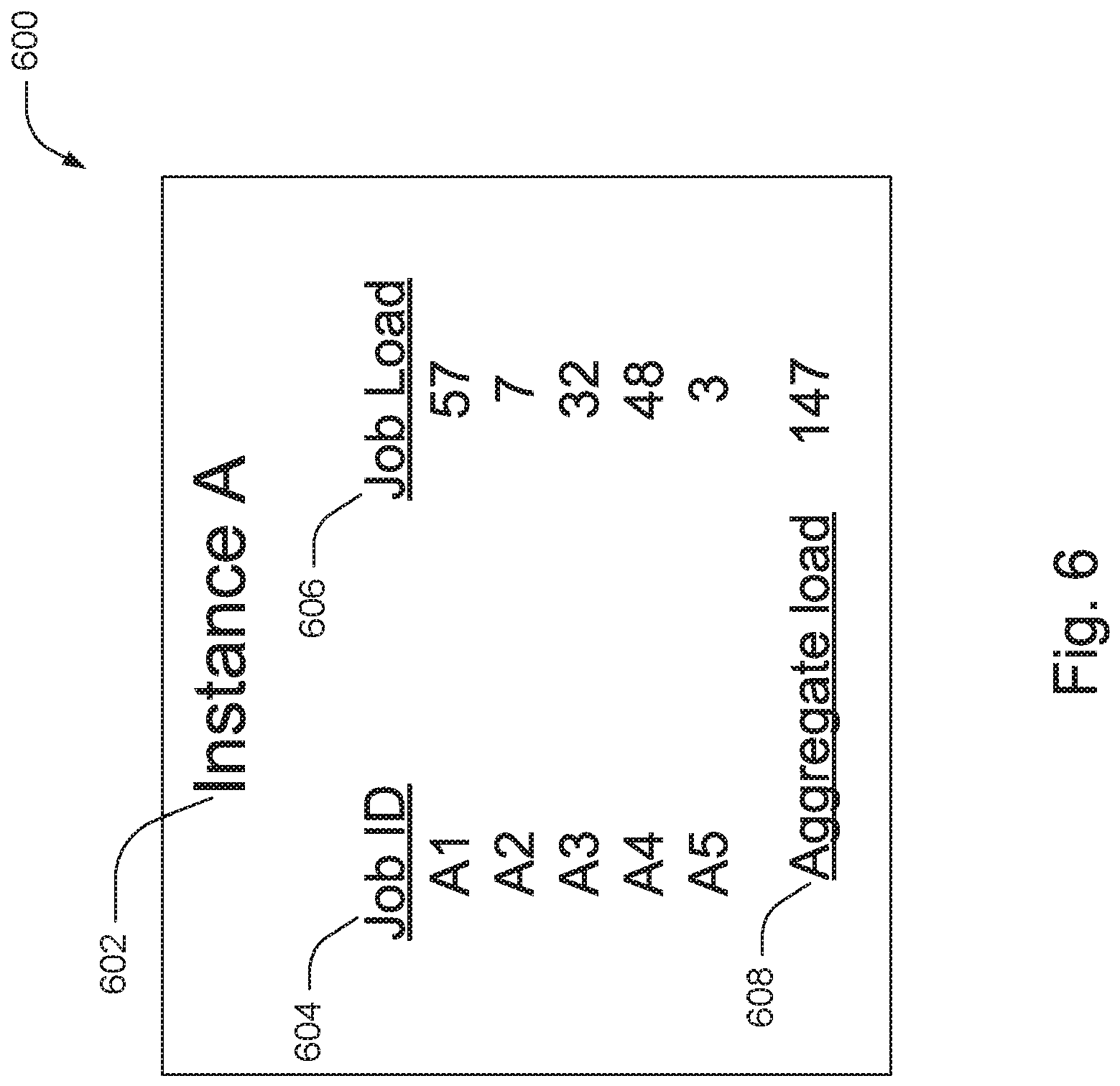 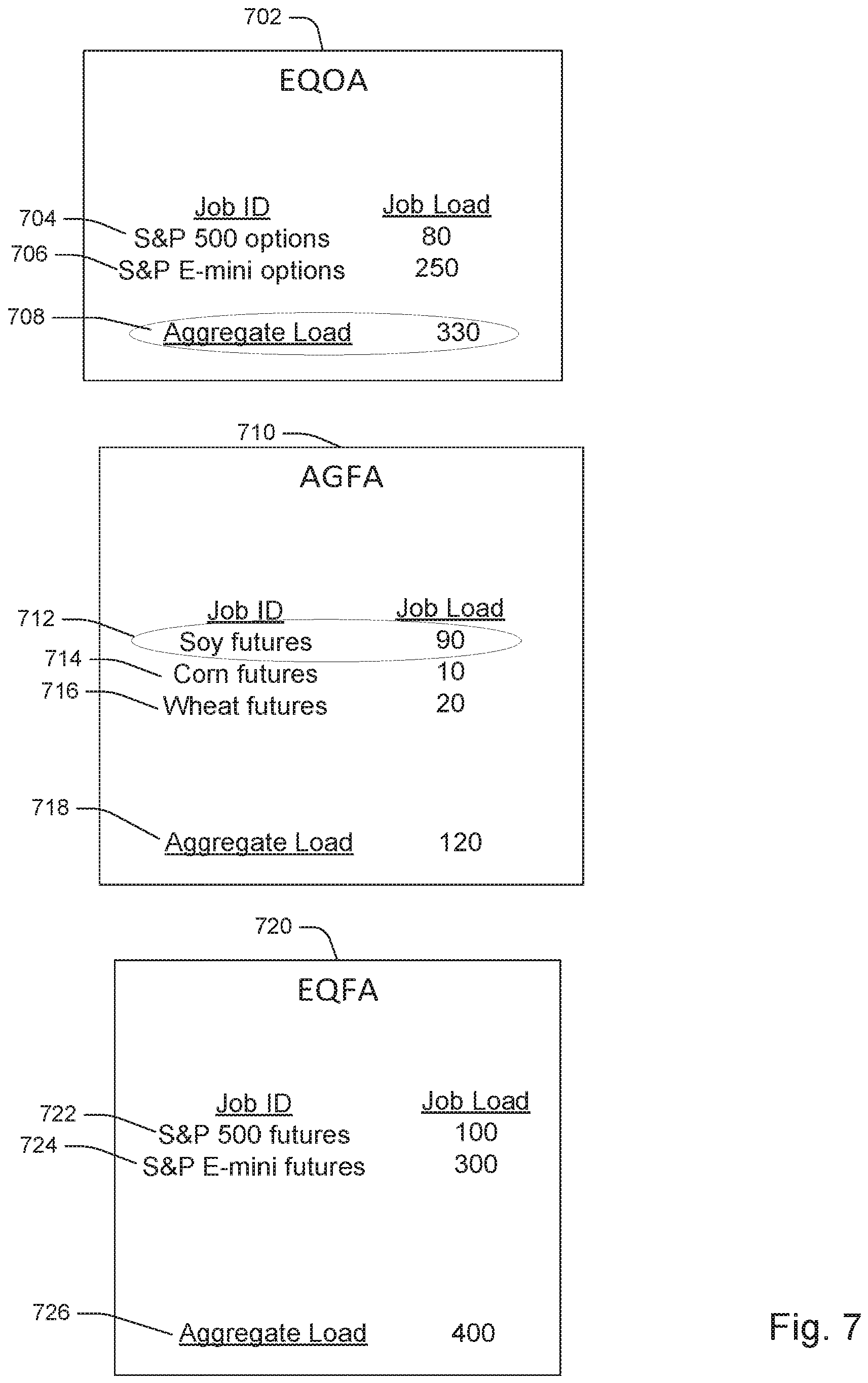 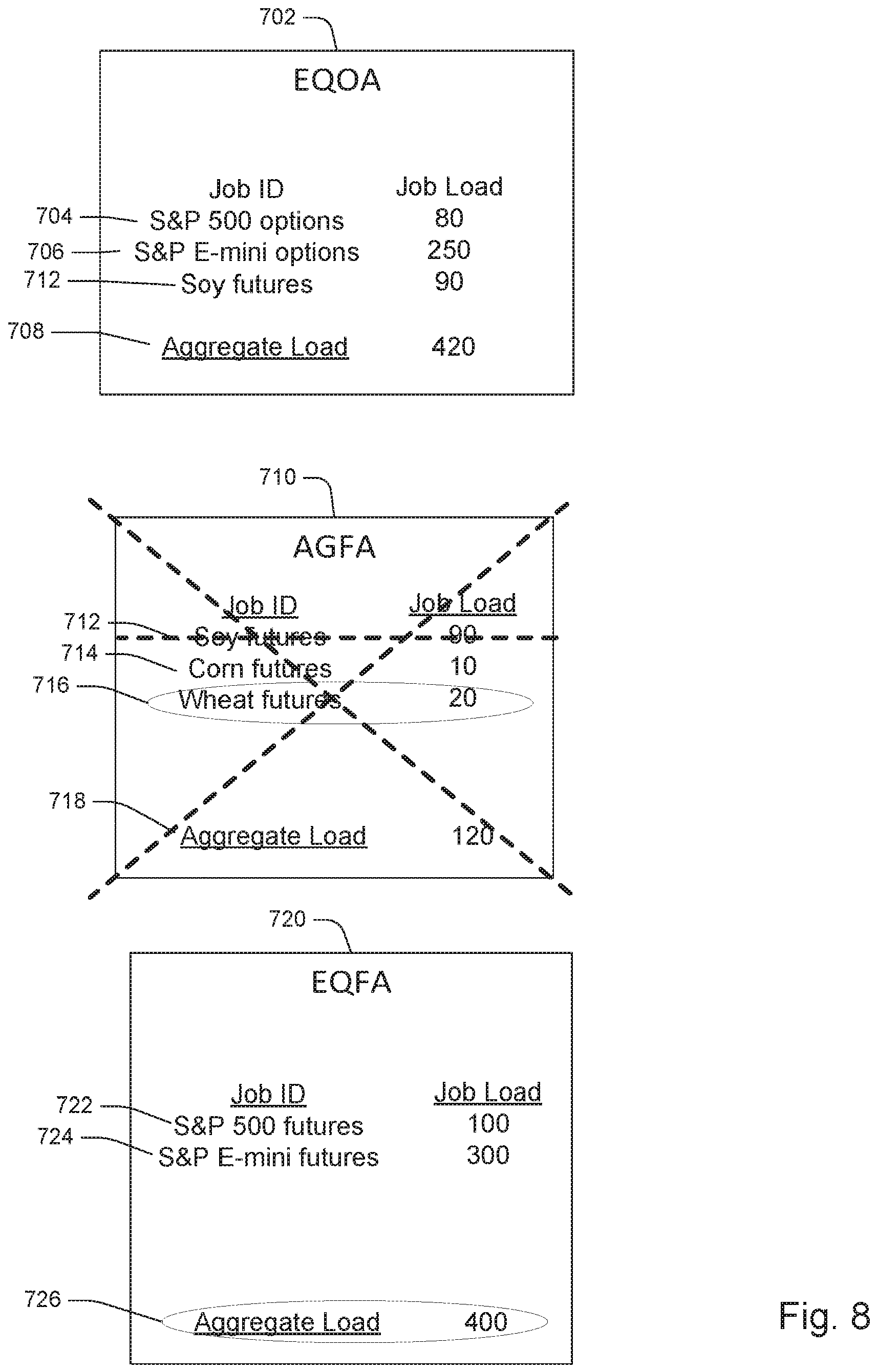 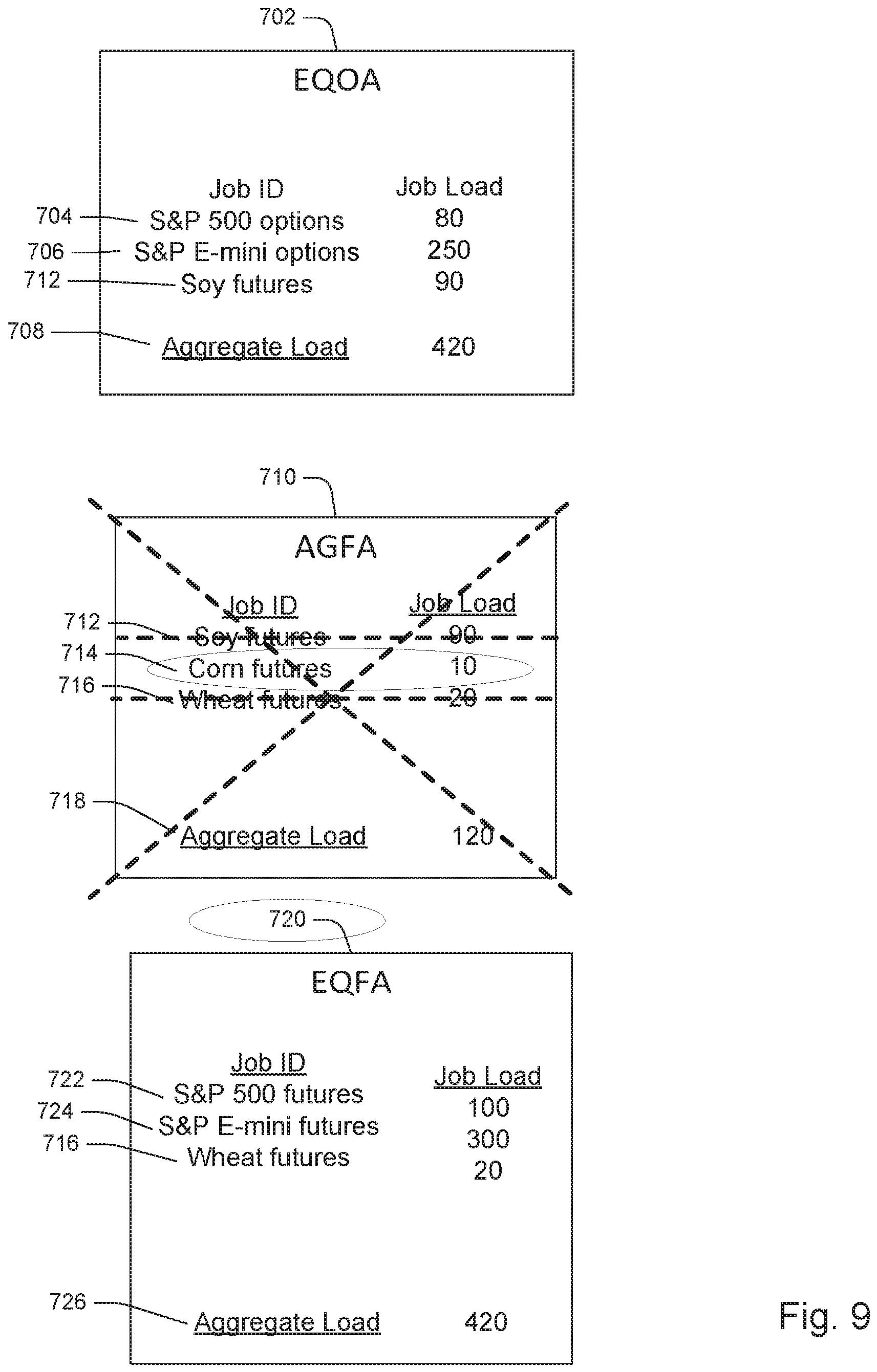 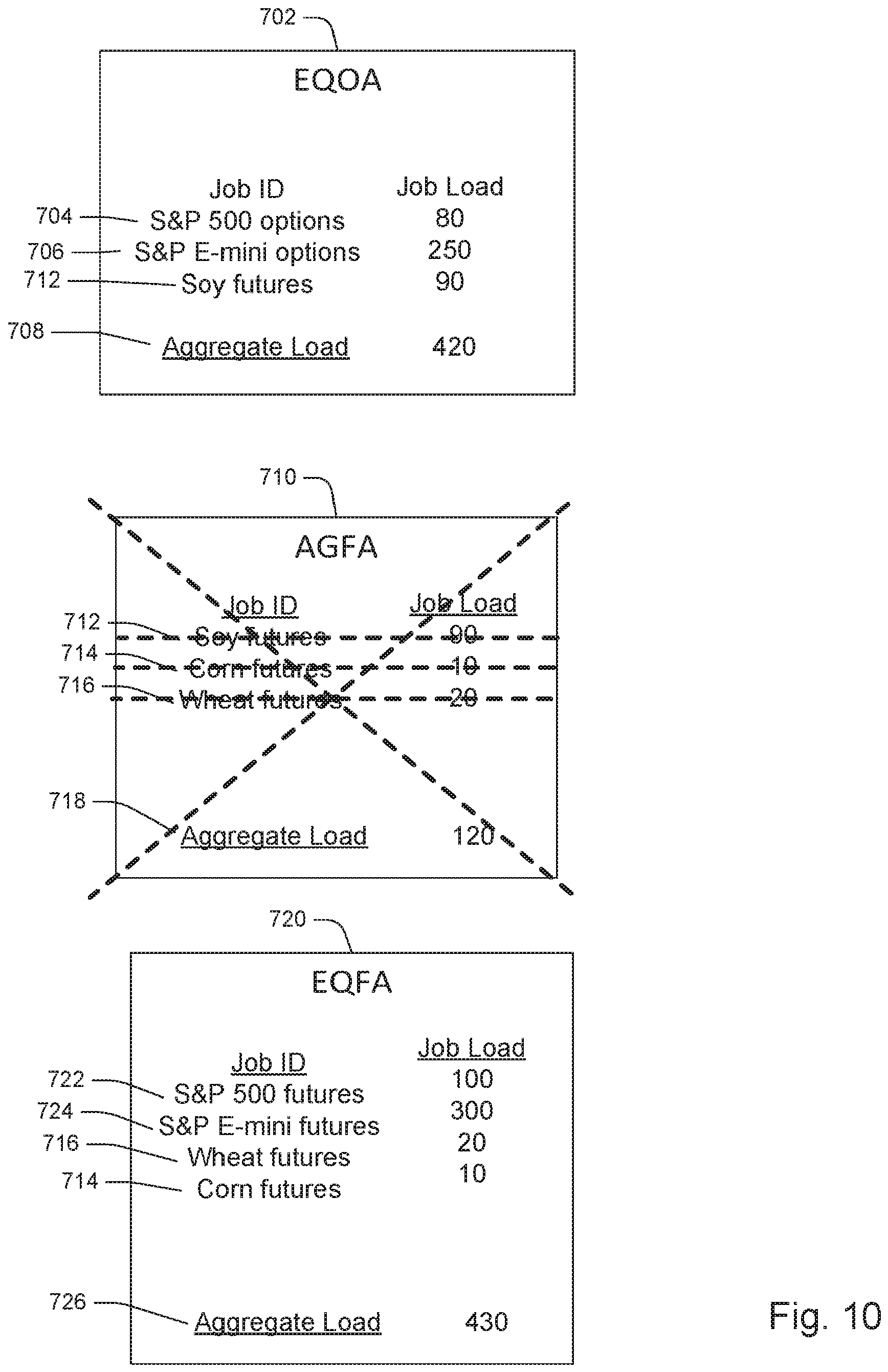 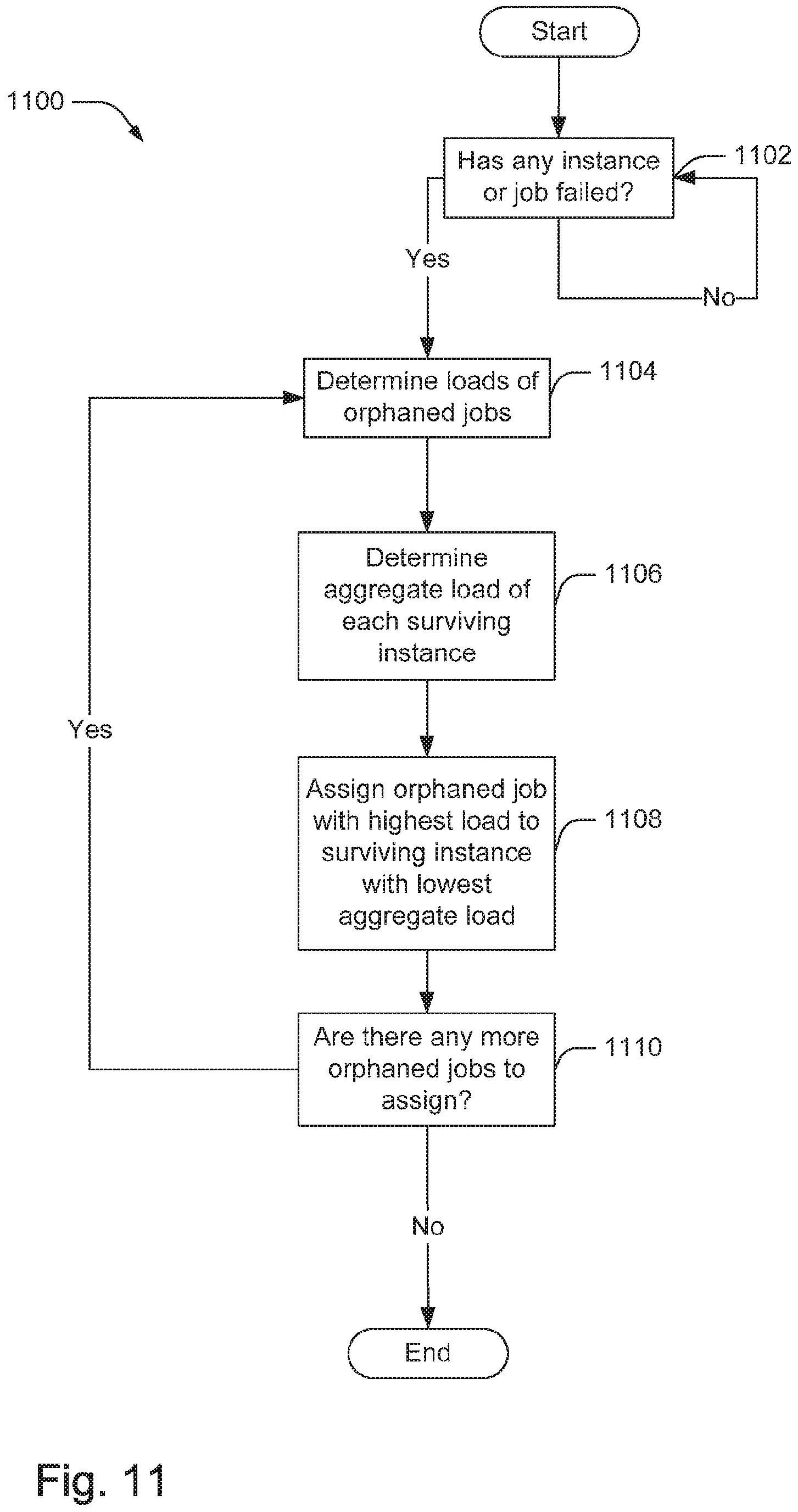 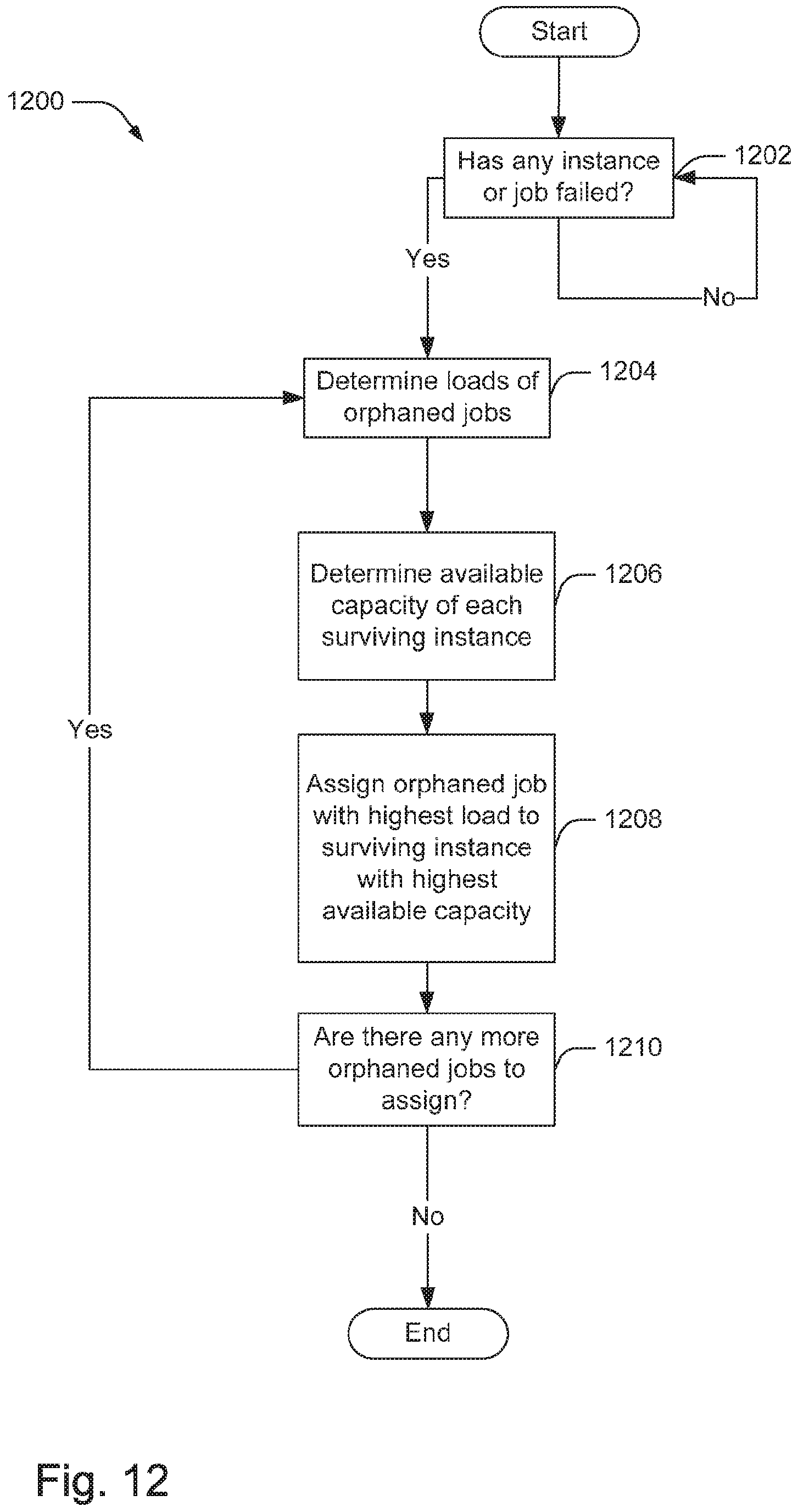 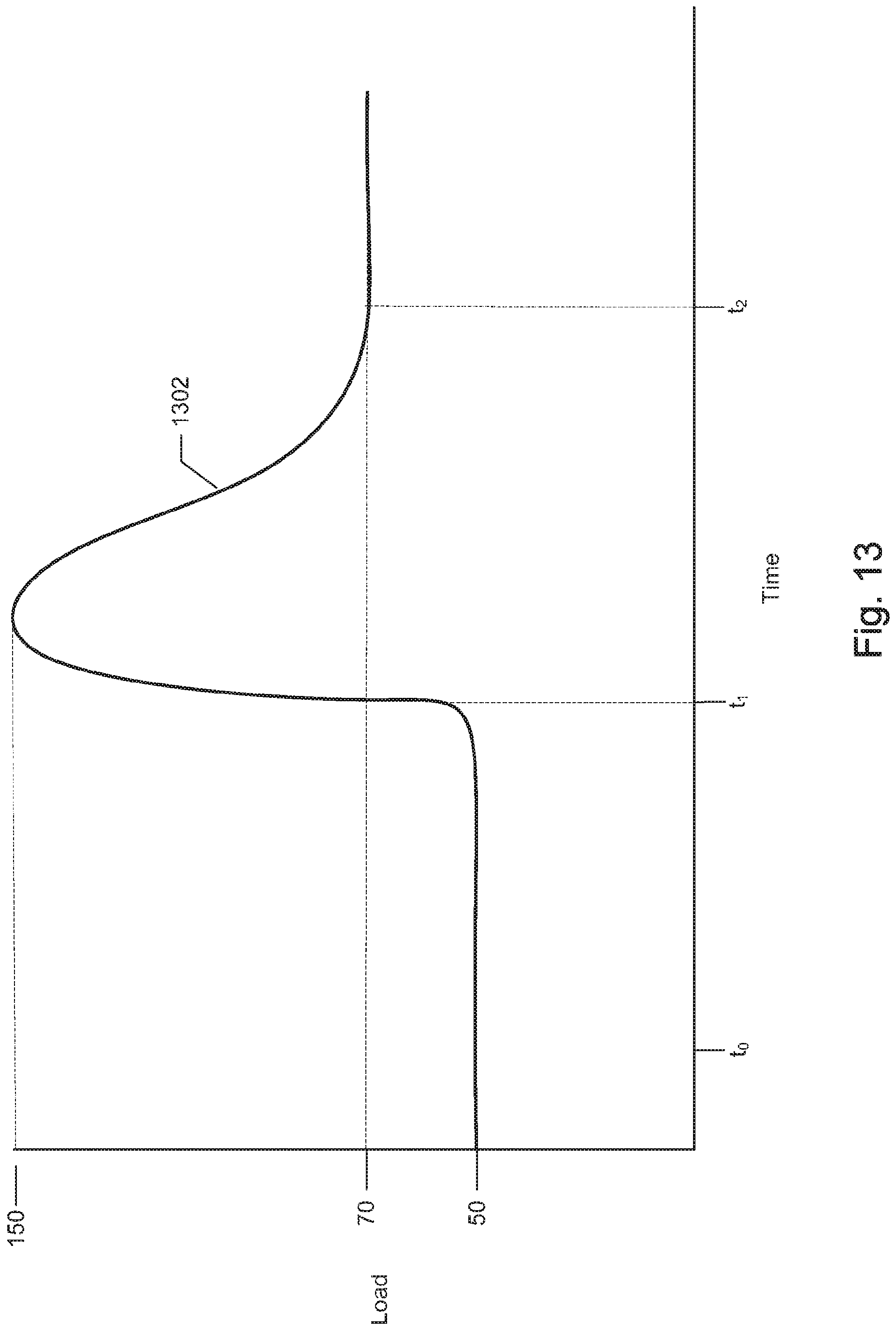