THE TECHNICAL FIELD OF THE INVENTION:

[0002] Shielded injection needle assemblies are known from e.g. WO 2008/077706 and US 5,292,314. Further, a syringe having a manually operational telescopic shield is disclosed in EP 252,644 (figure 11-13). When the user needs to purge this syringe, a variable quantum of the drug contained in the syringe is ejected into a purging chamber forming the telescopic shield. Prior to purging the syringe, the user must manually manipulate the telescopic shield into the correct position. When purging the syringe, the user determines the volume ejected into the chamber of the shield.
[0003] Injection devices having an injection needle for repetitive use is disclosed in US 3,354,881 and US 4,416,663. These injection devices for repetitive use have a telescopic movable shield which covers the tip of needle cannula between injections. The telescopic shield is pushed to its initial covering position by resilient means, which in US 4,416,663 is identified as being a spring. Further, the telescopic shield is provided with a reservoir containing a cleaning agent for cleaning the tip of the needle cannula between injections. The cleaning agent is in both US 3,354,881 and US 4,416,663 referred to as a sterilizing fluid.
[0004] However, as the injection needle is maintained attached to the injection device between injections, the sterilizing fluid can flow through the lumen of the needle cannula and into the interior of the cartridge and thus be mixed with the pharmaceutical liquid drug contained in the cartridge and thus contaminate the drug. The result being that next time an injection is performed, the sterilizing fluid that has flown into the cartridge is injected into the body of the user together with the pharmaceutical liquid drug of the cartridge.

DESCRIPTION OF THE INVENTION:

[0025] An "injection pen" is typically an injection apparatus having an oblong or elongated shape somewhat like a pen for writing. Although such pens usually have a tubular cross-section, they could easily have a different cross-section such as triangular, rectangular or square or any variation around these geometries.
[0026] The term "Needle Cannula" is used to describe the actual conduit performing the penetration of the skin during injection. A needle cannula is usually made from a metallic material such as e.g. stainless steel and connected to a hub to form a complete injection needle also often referred to as a "needle assembly". A needle cannula could however also be made from a polymeric material or a glass material. The hub also carries the connecting means for connecting the needle assembly to an injection apparatus and is usually moulded from a suitable thermoplastic material. The "connection means" could as examples be a luer coupling, a bayonet coupling, a threaded connection or any combination thereof e.g. a combination as described in EP 1,536,854.
[0027] The term "Needle unit" is used to describe one single needle assembly carried in a container. Such container usually has a closed distal end and an open proximal end which is sealed by a removable seal. The interior of such container is usually sterile such that the needle assembly is ready-to-use. Needle units specially designed for pen injections systems are defined in ISO standard No. 11608, part 2, and are often referred to as "pen needles". Pen needles have a front part for penetrating into the user and a back part for penetrating into the cartridge containing the drug.
[0028] As used herein, the term "drug" is meant to encompass any drug-containing flowable medicine capable of being passed through a delivery means such as a hollow needle in a controlled manner, such as a liquid, solution, gel or fine suspension. Representative drugs includes pharmaceuticals such as peptides, proteins (e.g. insulin, insulin analogues and C-peptide), and hormones, biologically derived or active agents, hormonal and gene based agents, nutritional formulas and other substances in both solid (dispensed) or liquid form. Further, the term "Preservative containing liquid drug" is meant to encompass any flowable drug containing any amount of a preservative. In one example the preservative could be a phenol or a metacresol or any combination thereof. However, the wording preservative containing should not be limited to only these substances but should indeed mean any combination of a flowable drug and a preservative.
[0029] "Cartridge" is the term used to describe the container containing the drug. Cartridges are usually made from glass but could also be moulded from any suitable polymer. A cartridge or ampoule is preferably sealed at one end by a pierceable membrane referred to as the "septum" which can be pierced e.g. by the non-patient end of a needle cannula. Such septum is usually self-sealing which means that the opening created during penetration seals automatically by the inherent resiliency once the needle cannula is removed from the septum. The opposite end is typically closed by a plunger or piston made from rubber or a suitable polymer. The plunger or piston can be slidable moved inside the cartridge. The space between the pierceable membrane and the movable plunger holds the drug which is pressed out as the plunger decreased the volume of the space holding the drug. However, any kind of container - rigid or flexible - can be used to contain the drug.
[0030] Since a cartridge usually has a narrower distal neck portion into which the plunger cannot be moved not all of the liquid drug contained inside the cartridge can actually be expelled. The term "initial quantum" or "substantially used" therefore refers to the injectable content contained in the cartridge and thus not necessarily to the entire content.
[0031] The term "Permanently secured" as used in the description is intended to mean that the parts, which in this application is embodied as the needle cannula and the injection device, requires the use of tools in order to be separated and should the parts be separated it would permanently damage at least one of the parts.
[0032] By the term "Pre-filled" injection device is meant an injection device in which the cartridge containing the liquid drug is permanently embedded in the injection device such that it cannot be removed without permanent destruction of the injection device. Once the pre-filled amount of liquid drug in the cartridge is used, the user normally discards the entire injection device. This is in opposition to a "Durable" injection device in which the user can himself change the cartridge containing the liquid drug whenever it is empty. Pre-filled injection devices are usually sold in packages containing more than one injection device whereas durable injection devices are usually sold one at a time. When using pre-filled injection devices an average user might require as many as 50 to 100 injection devices per year whereas when using durable injection devices one single injection device could last for several years, however, the average user would require 50 to 100 new cartridges per year.
[0033] All headings and sub-headings are used herein for convenience only and should not be constructed as limiting the invention in any way.
[0034] The use of any and all examples, or exemplary language (e.g. such as) provided herein, is intended merely to better illuminate the invention and does not pose a limitation on the scope of the invention unless otherwise claimed. No language in the specification should be construed as indicating any non-claimed element as essential to the practice of the invention.
[0035] The citation and incorporation of patent documents herein is done for convenience only and does not reflect any view of the validity, patentability, and/or enforceability of such patent documents.
[0036] This invention includes all modifications and equivalents of the subject matter recited in the claims appended hereto as permitted by applicable law.

BRIEF DESCRIPTION OF THE DRAWINGS:

[0037] The invention will be explained more fully below in connection with a preferred embodiment and with reference to the drawings in which:

[0038] The figures are schematic and simplified for clarity, and they just show details, which are essential to the understanding of the invention, while other details are left out. Throughout, the same reference numerals are used for identical or corresponding parts.

- a housing (1) supporting a cartridge (20) permanently embedded in the injection device and having an interior chamber (21) containing the pharmaceutical preservative containing liquid drug to be injected,

- a needle cannula (10) permanently secured to the injection device and usable for multiple injections and having a front part (11) with a tip (13) and a back part (12), which back part (12) is adapted to be in liquid communication with the interior chamber (21) of the cartridge (20), and

- a telescopic needle covering shield (30), which distally is provided with a reservoir (31) confining a predetermined volume of a liquid for cleaning at least the tip (13) of the needle cannula (10) between subsequent injections, and which telescopic needle covering shield (30) is urged distally into a first position by a first resilient member (40) and moved proximally against the bias of the first resilient member (40) into a second position during injection; 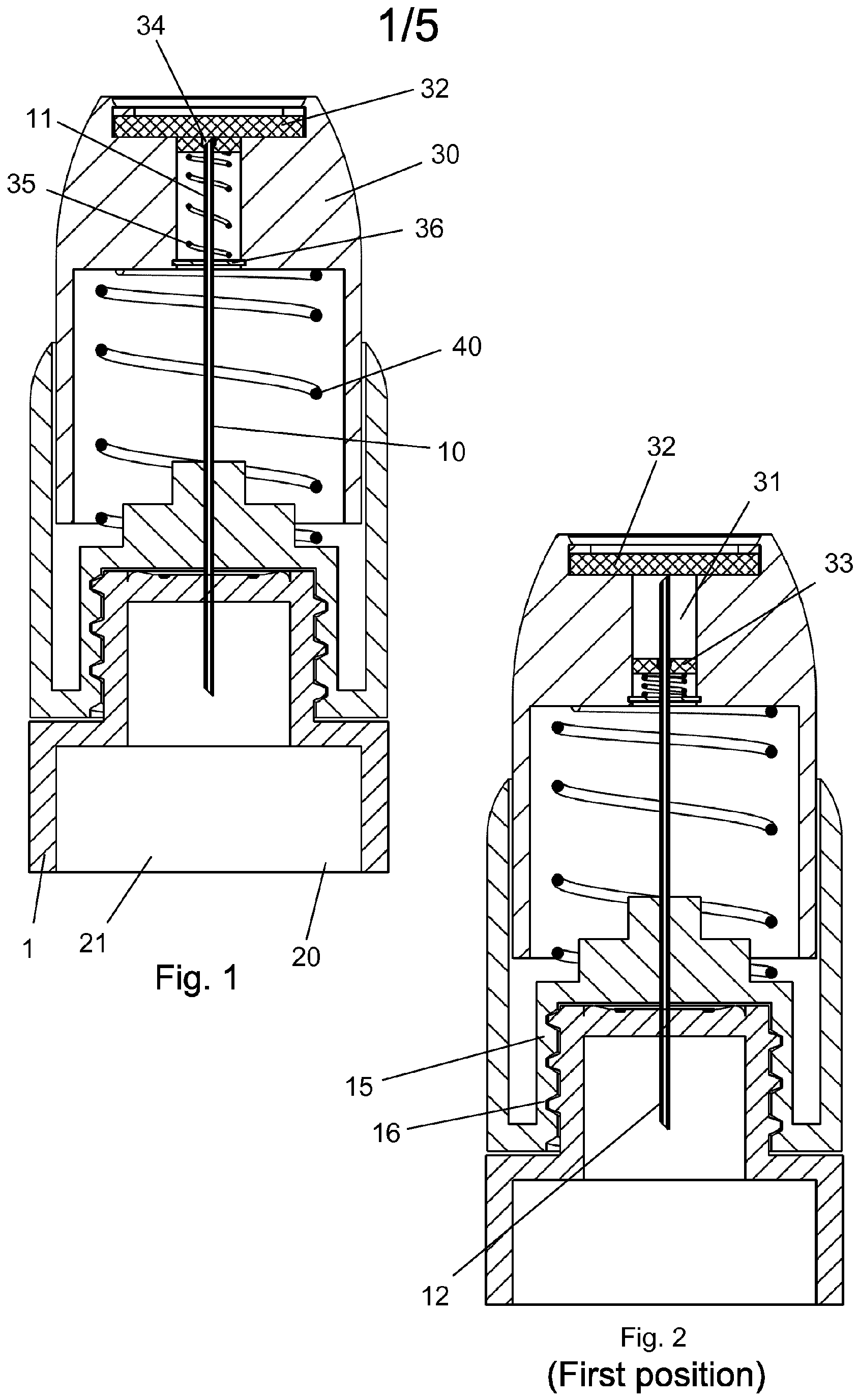 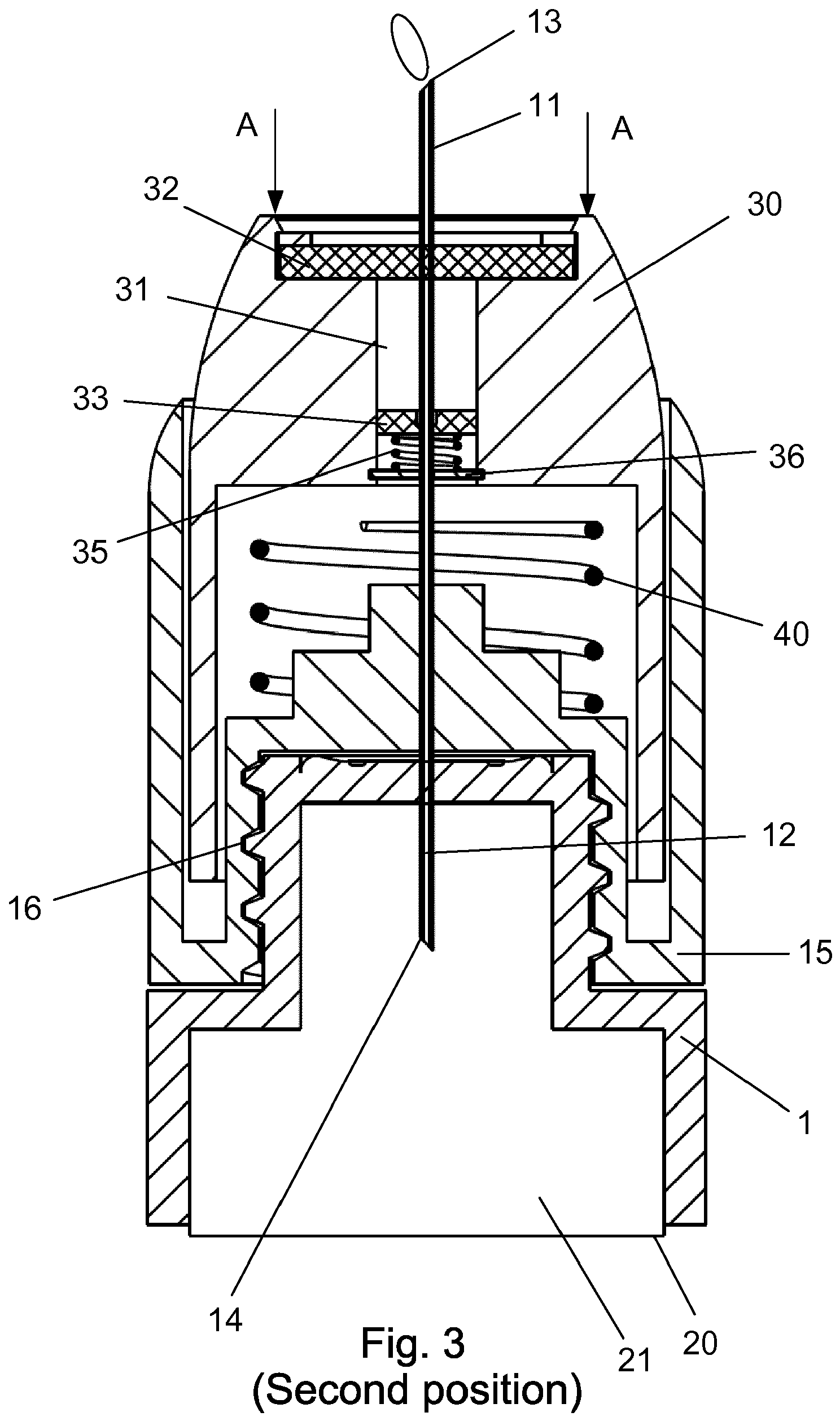 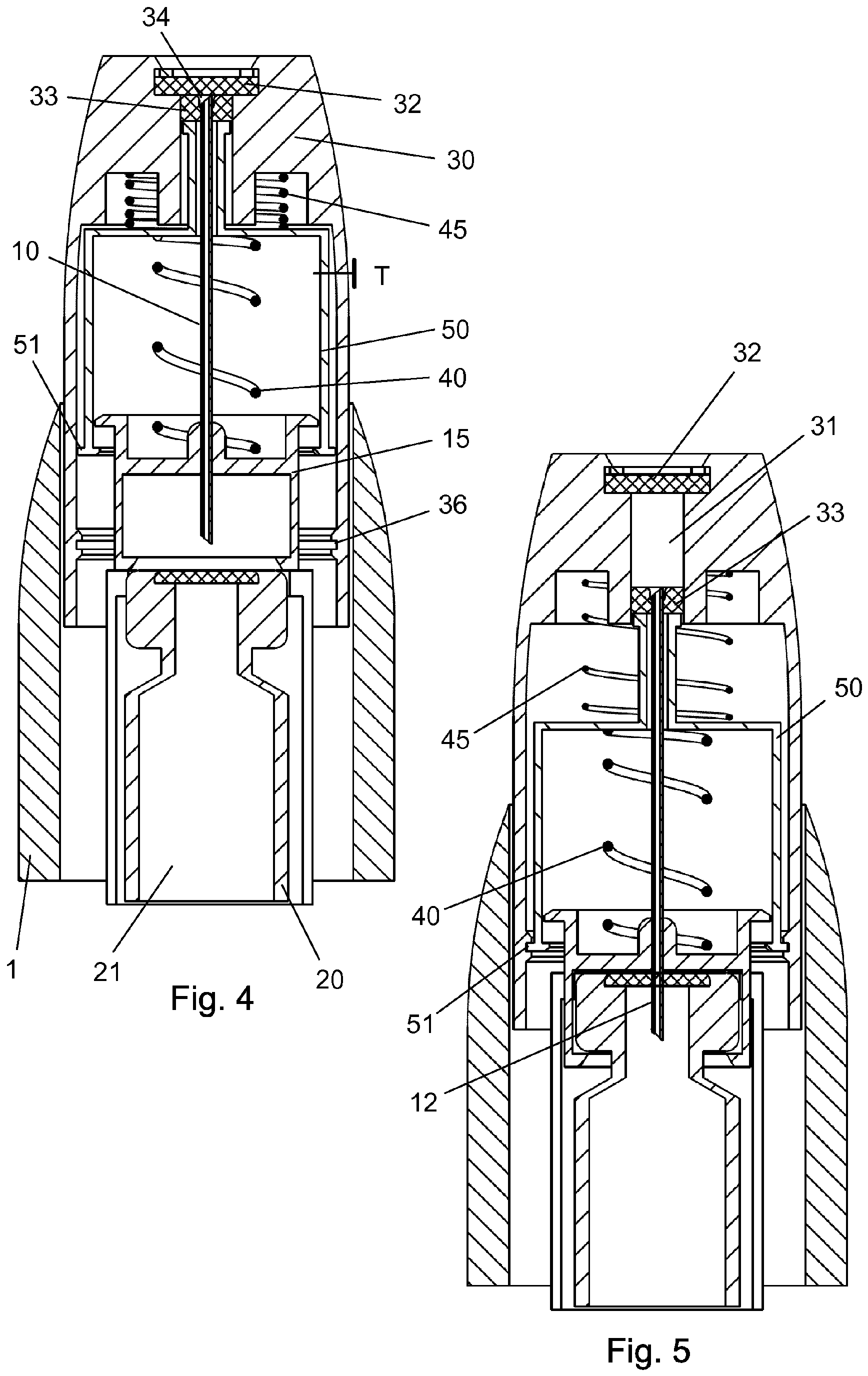 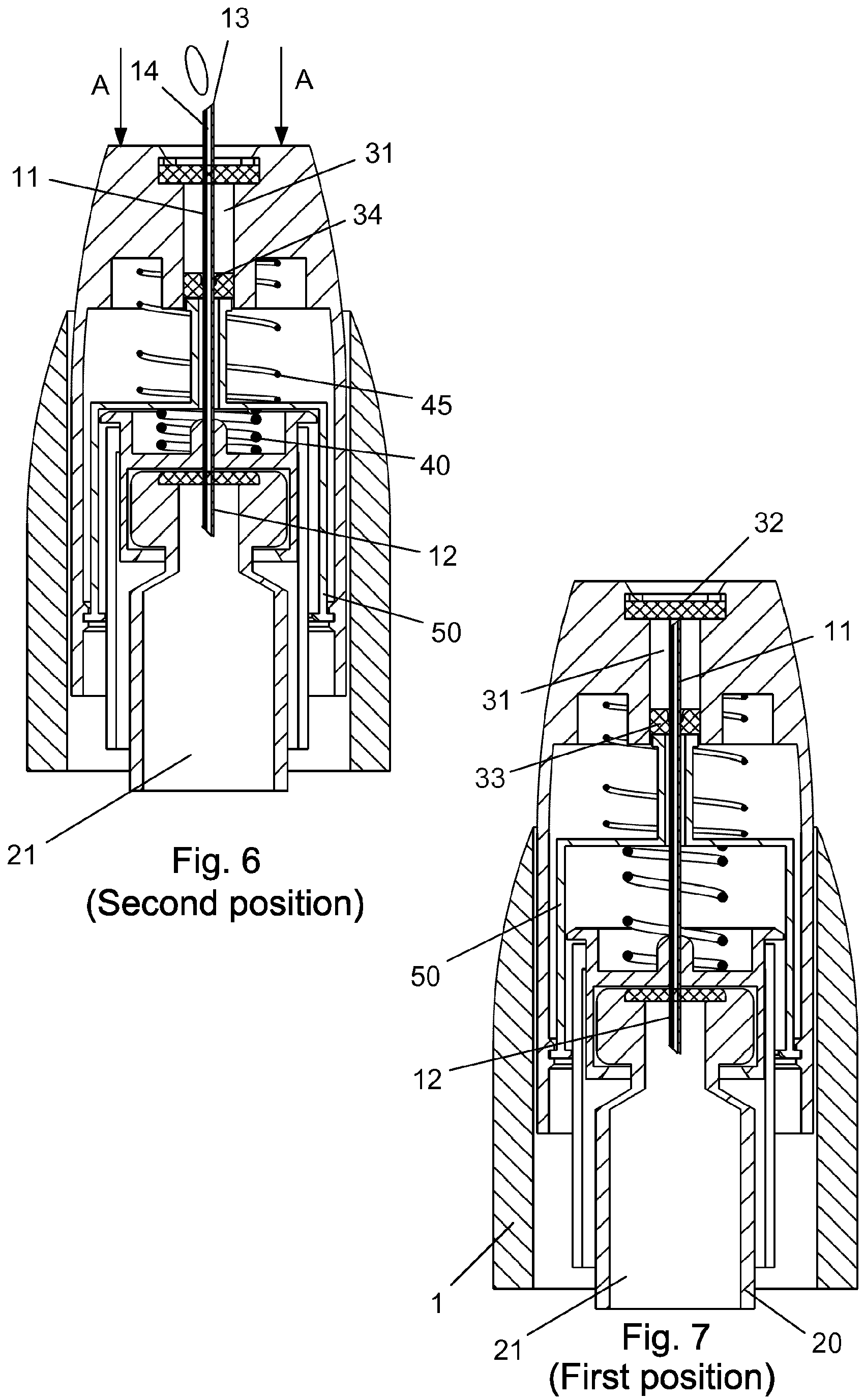 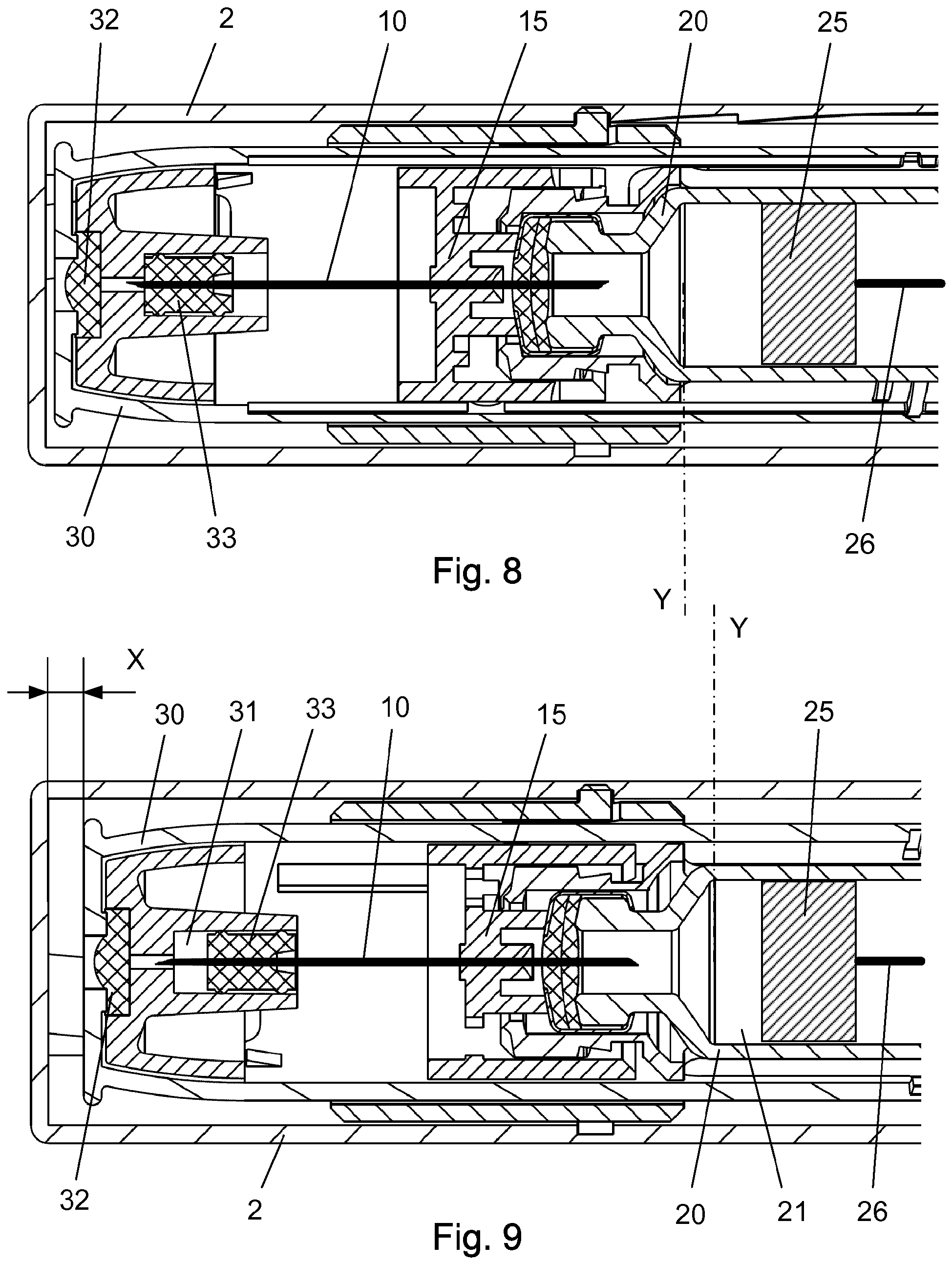