[0002] This invention is directed to an ignition source for use with internal combustion engines. More particularly, the invention is directed to a plasma ignition plug designed to replace a spark plug. The plasma generated by the inventive ignition plug increases molecular dissociation of the fuel such that virtually 100% combustion is achieved, with a decrease in heat generation, an increase in horsepower, and near complete remediation of the exhaust profile. For instance, US 2002/0030427 is related to a spark plug including a sparking electrode with a firing tip and a ground electrode wherein the ground electrode includes a toroidal member, having a convex outer surface, coupled to a support portion of a sleeve of the ground electrode. Further, US 2012/0062098 describes spark plugs including an elongated body having an electrical connector at one end wherein an electrode body and an electrode cage are spaced apart from one another wherein the electrode cage extends over the electrode body such that the arcuate members of the electrode cage are equidistantly spaced from the bulbous or spherical electrode body. Further, in WO 95/04884 an ignition plug for igniting the air/fuel mixture within the combustion chamber is disclosed wherein a cone-like shaped center electrode tip and a ground electrode which is substantially aerodynamically shaped, is mounted coaxial to the center electrode tip.
[0003] The purpose of this invention is to create a device for use in internal combustion engines that induces combustion of petroleum-based fuels by plasma propagation. Plasma ignition properties are not currently provided by conventional spark ignition devices such as spark plugs. The field of spark-type devices is densely populated by more than 1,000 patented spark emitter and plasma propagation devices. The field of plasma-arc igniter systems is also densely populated but largely relegated to uses not affiliated with internal combustion engines. All such devices are typically comprised of (a) an anode bar which is inserted longitudinally through the center of (b) an insulating porcelain material comprised of a vitreous or glassine ceramic of various types, (c) a fitted metallic cathode material comprised of various materials, which is affixed to the ceramic insulating material using various strategies and techniques, (d) all of which incorporate a wide variety of spark-gap geometries ranging from a simple spark bar separated from the tip of the anode bar to various types of cages, plates, layered materials, and other strategies intended to amplify or enhance the effectiveness of the spark emitted into the cylinder of the engine during ignition cycles.
[0004] The current invention is distinguished from all prior art devices of the same class by (a) the materials incorporated into its design, (b) the geometry of its ignition tip, and (c) its electronic and electrical properties. A singular and common short-coming of spark plugs in general is that the metallic elements incorporated into their manufacture are incapable of emitting a spark across the ignition gap that efficiently ignites, beyond a finite limit, the air and fuel droplets compressed in the cylinder during the detonation phase. The limitations of current 'spark emitter' devices are the product of (a) marginal conductivity of the metallic elements, (b) electrical persistence demonstrated by the metallic elements, and (c) a finite limit to electrical saturation provided by the porcelain ceramic insulating materials.
[0005] The normal air-to-fuel ratio supported by conventional devices is generally recognized as 14.7:1. Newer engines have recently been manufactured which operate at an elevated ratio of 22:1. This elevated level of air-to-fuel mixtures represents the upper limit of operability in conventional internal combustion engine devices because the amount of electrical current (including a number of variable input properties) that can be tolerated by conventional spark plugs cannot exceed this level of performance. In order to efficiently detonate a fuel-air mixture at a higher ratio the ignition source must be designed to tolerate much higher current levels, faster switching times, and higher peak amplitudes than can be supported by any currently available devices.
[0006] The present invention fulfills these needs and provides other related advantages.

[0017] The accompanying drawings illustrate the invention. In such drawings:

FIGURE 1 is a perspective view of the plasma ignition plug of the present invention.

FIGURE 2 is a front view of the plasma ignition plug of the present invention.

FIGURE 3 is an exploded view of the plasma ignition plug of the present invention.

FIGURE 4 is a close-up view of the annular gap of the plasma ignition plug of the present invention.

FIGURE 5 is a schematic illustration of an OEM system including the inventive plasma ignition plug.

FIGURE 6 is a schematic illustration of an integrated plug and wire retrofit used with the inventive plasma ignition plug.

FIGURE 7 is a schematic illustration of a retrofit system for use with the inventive plasma ignition plug.

a generally cylindrical insulating body (14) having a proximal end and a distal end;

a central anode (12) co-axially disposed within the insulating body (14) and generally coextensive therewith;

a generally semi-spherical emitter (16) disposed in the distal end of the insulating body (14) and electrically connected to the central anode (12);

a terminal (24) disposed in the proximal end of the insulating body (14) and electrically connected to the central anode (12); and

a cathode sleeve (18) co-axially disposed around the distal end of the insulating body (14) and having a torus-shaped ring (20) encircling and immediately adjacent to the emitter (16), wherein the ring (20) and emitter (16) form an annular spark gap (26) opening from the distal end of the insulating body (14) without interruption;
characterized in that the central anode (12) comprises a thorium-alloyed tungsten and the emitter (16) comprises titanium and is press fitted on the central anode (12). 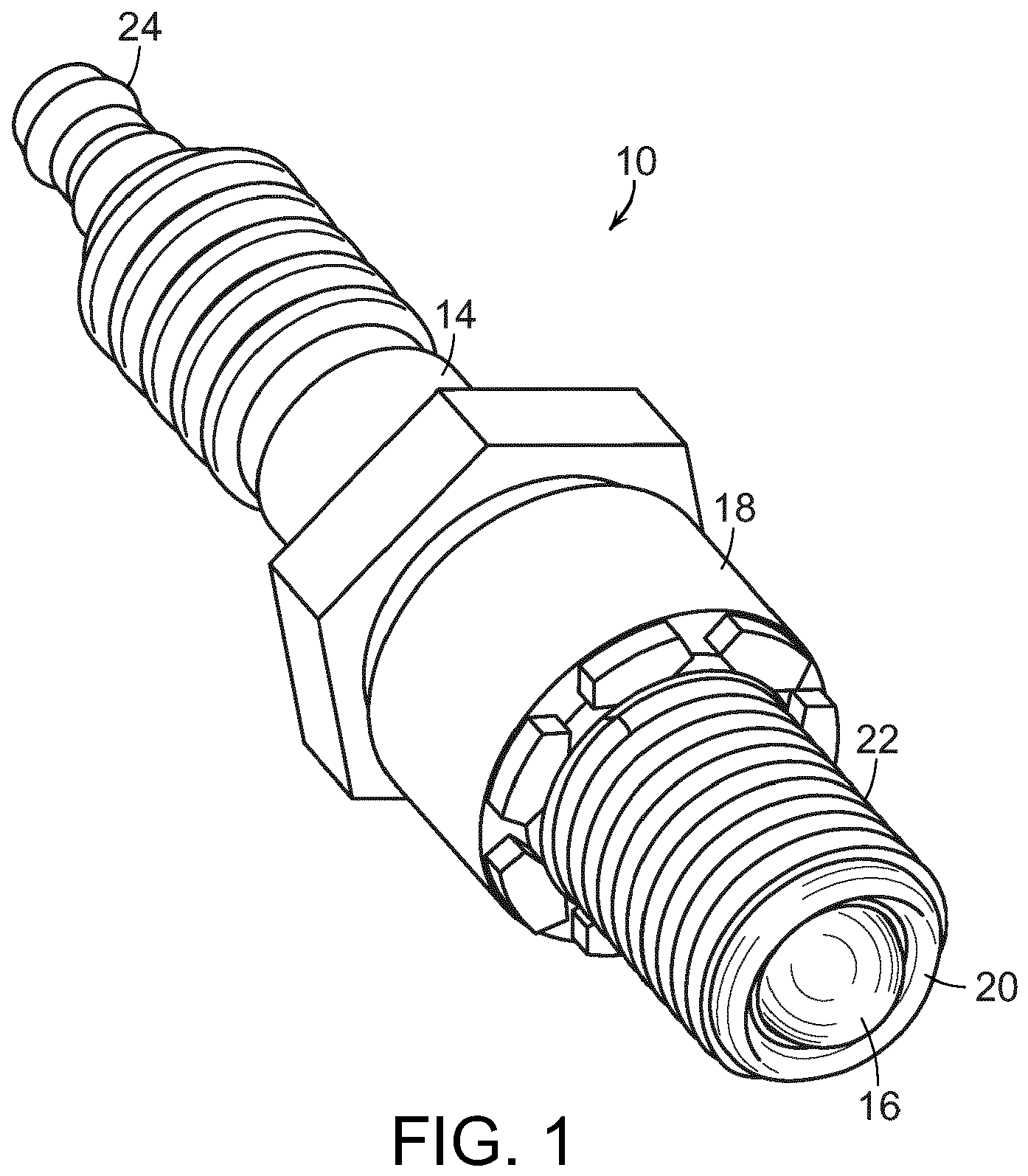 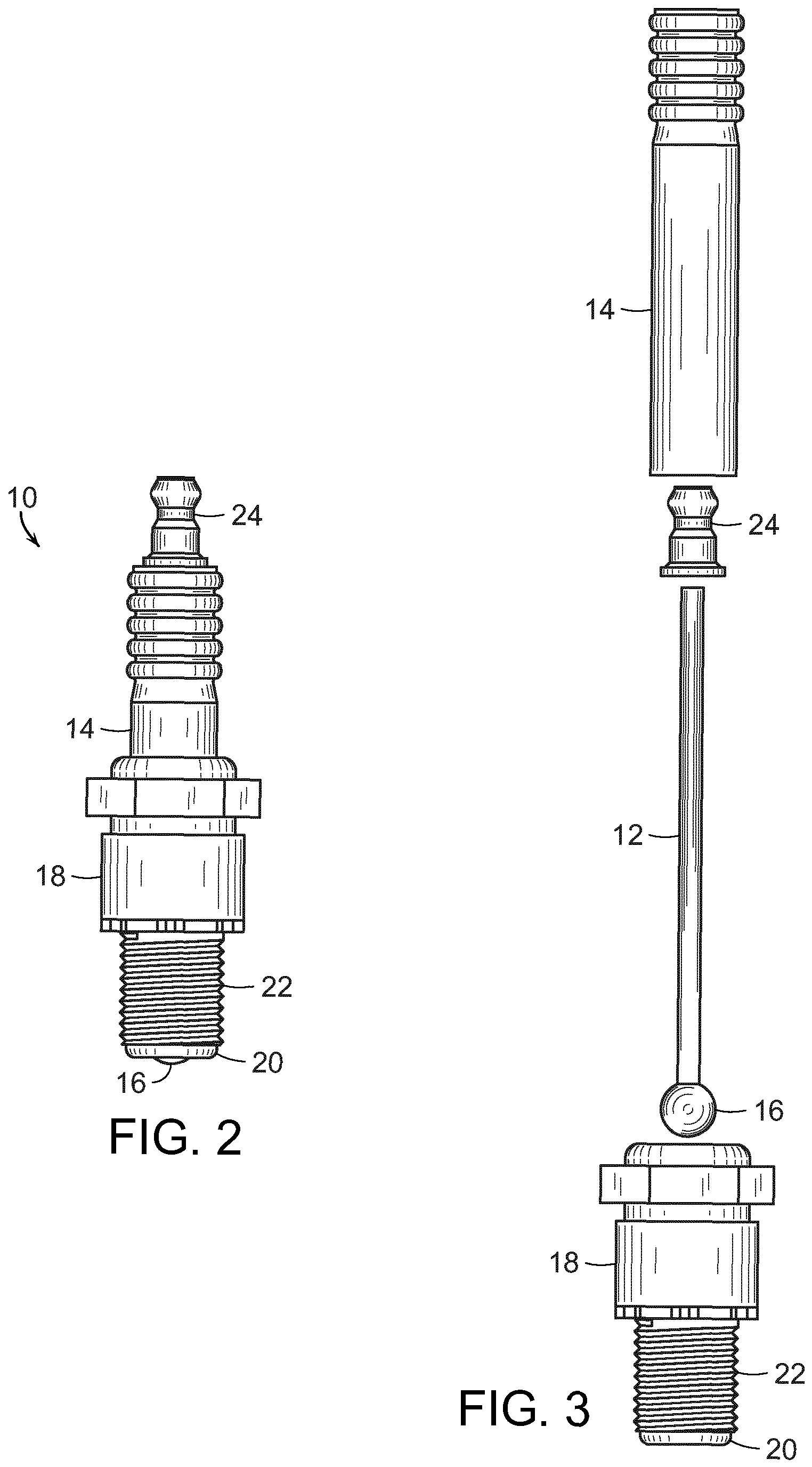 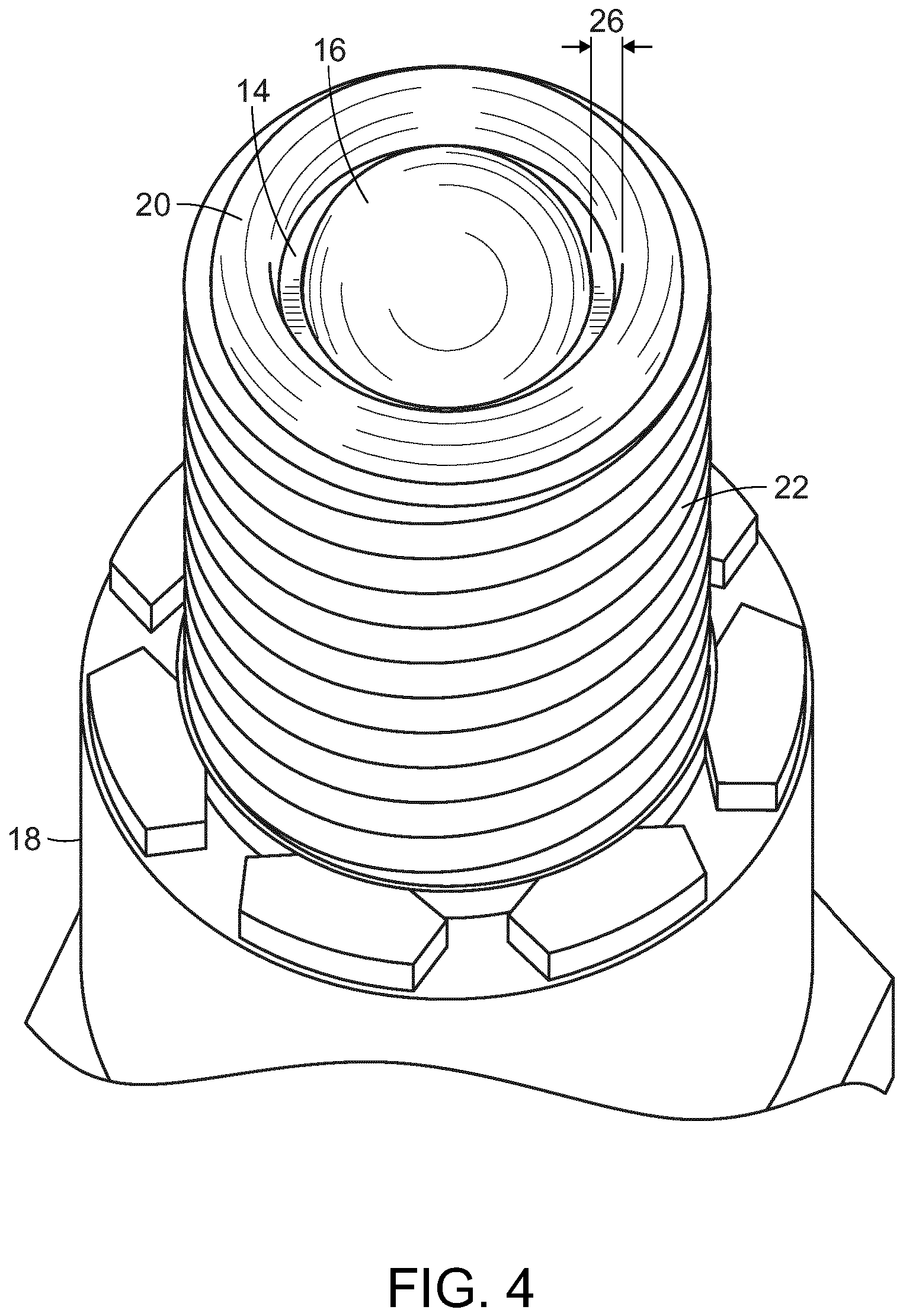 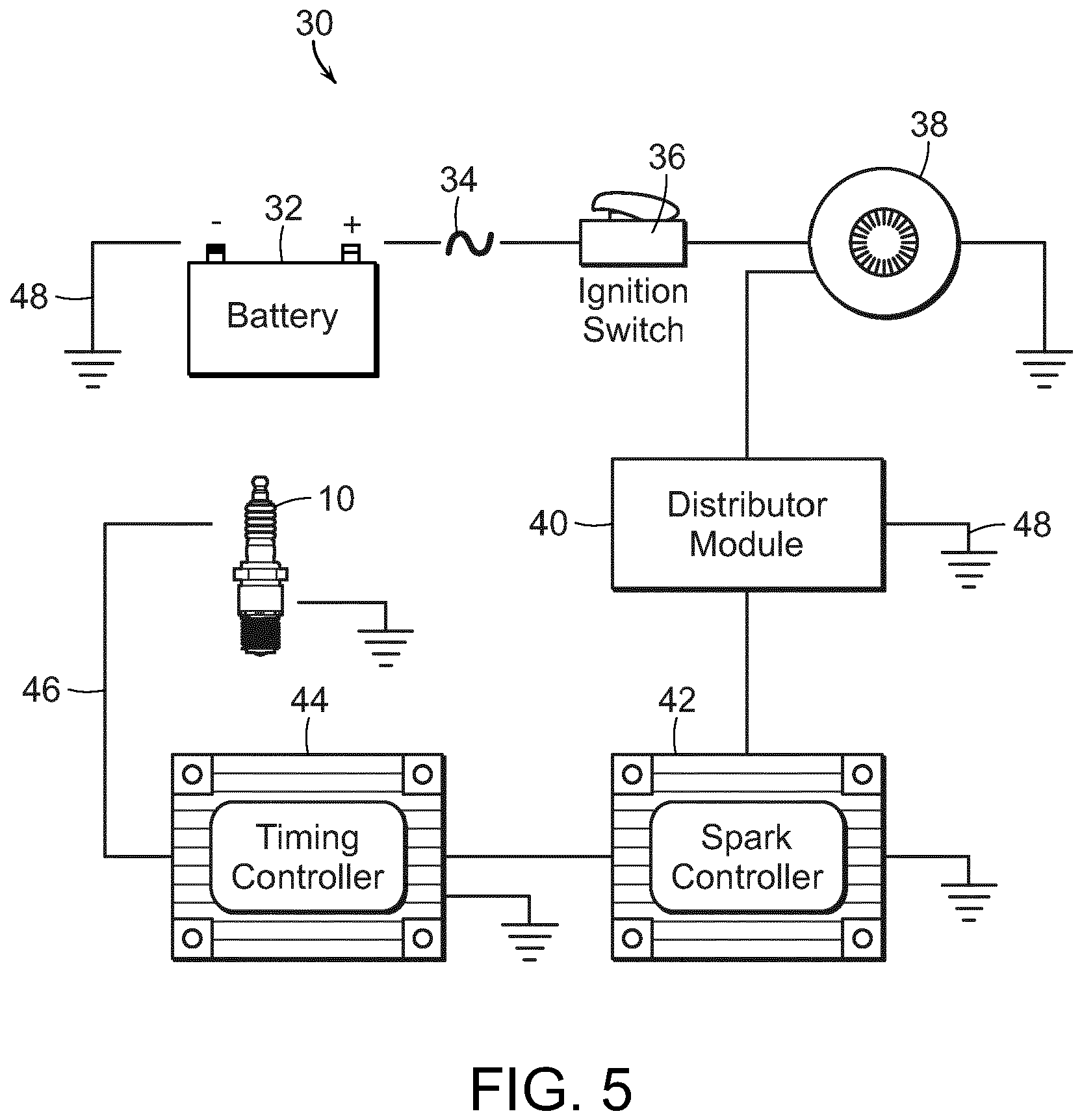 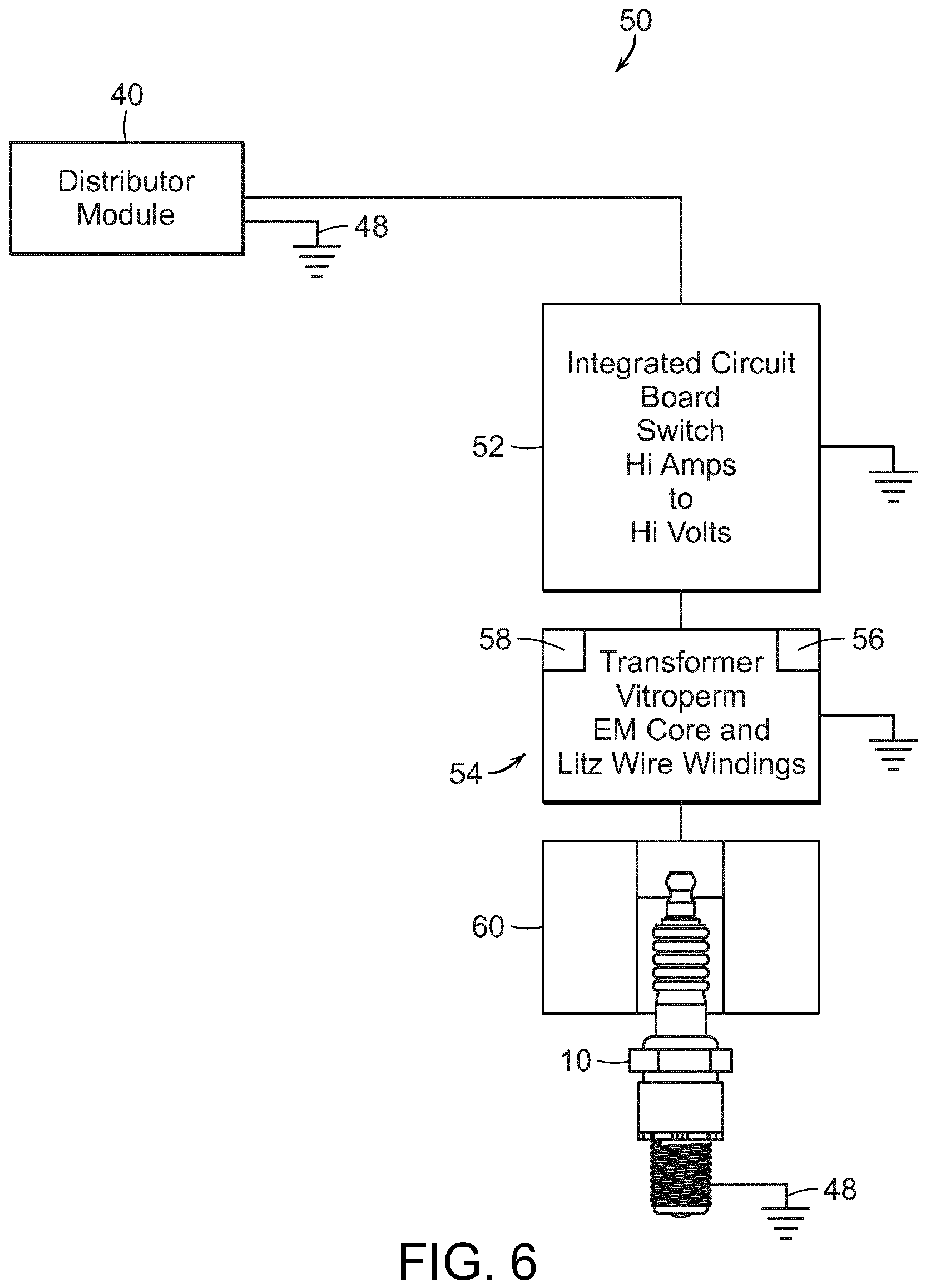 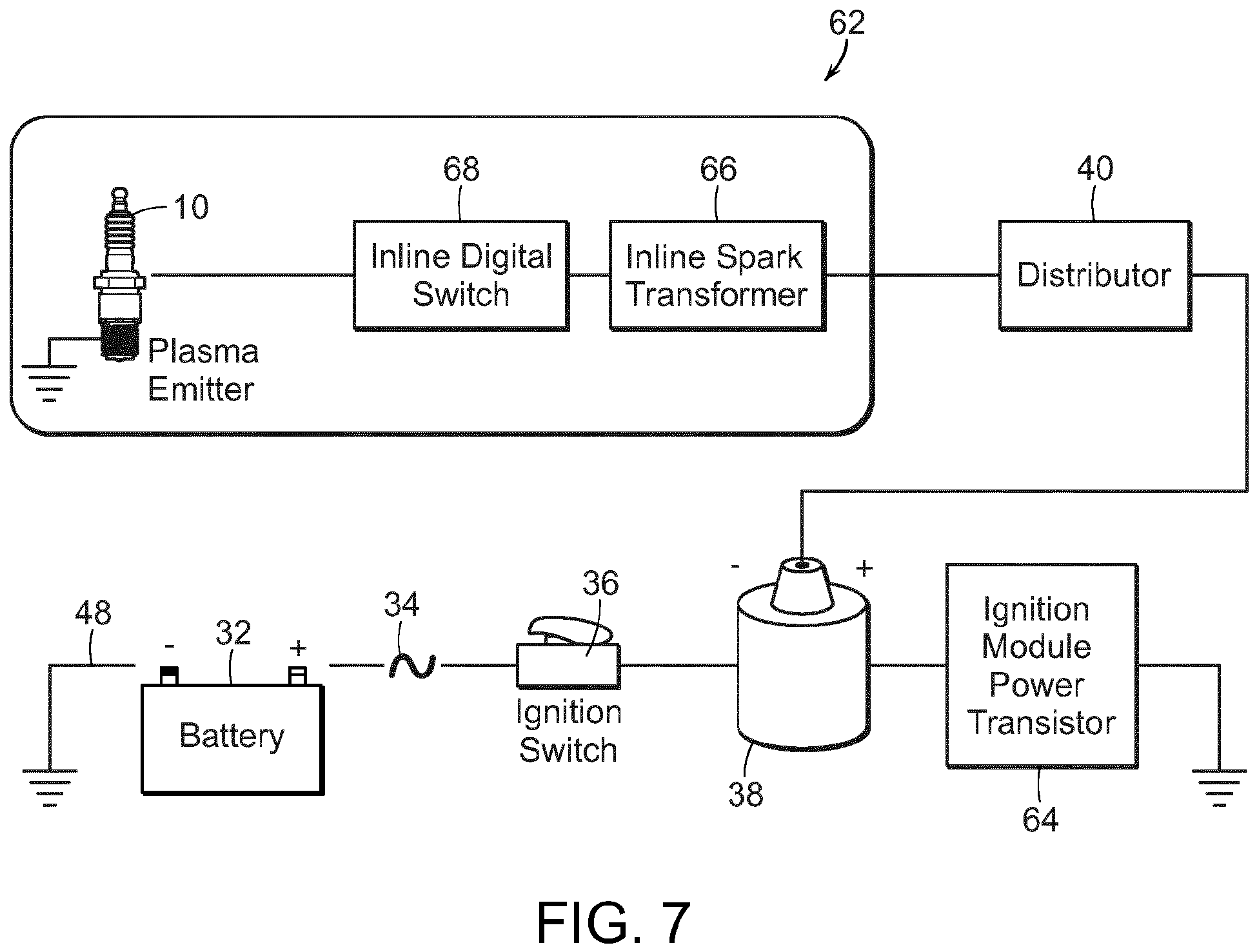