[0001] The present invention relates to an improved fluid coupling and in particular to a fluid coupling having a moving seal which transitions across a gap.

[0002] Fluid couplings are known wherein a seal transitions across a gap during the coupling or decoupling process. The seal is attached to one part that slides relative to another. The seal provides a sealing point between the two parts and closes a separation distance between the two parts. The gap is an area having a localised increase in the separation distance. In use, fluid is retained on one side of the seal. Fluid pressure exerts a force on the seal. When the seal transitions across relatively small gaps, the fluid pressure is not sufficient to deform the seal into the gap. However, when the gap is relatively large, the fluid pressure can urge the seal to deform into the gap, wherein further movement of the seal risks damaging seal as it becomes sheared between the sliding parts.
[0003] Whilst in some case gaps can be engineered to be maintained sufficiently small enough for the seal to transition across without damage, relatively large gaps cannot always be avoided, particularly in instances where the gap is created between two joined parts where the gap between the two parts cannot be easily controlled. A particular example is described in PCT/GB2008/050039. As shown in Figure 1, here, an annular seal 10 has to transition across a gap 20 created at a join between two parts 30a, 30b. Because the gap 20 between the two joined parts cannot be easily controlled, the gap is often sufficiently large so that as the seal 10 transitions across, fluid 40 retained on the one side of the seal exerts a sufficiently high force against the pressure on the other side of the seal to deform the seal into the gap. As the seal completes the transition across the gap it therefore becomes damaged. In a de-coupling operation, the damage to the seal can prevent re-coupling to the same performance levels. For instance, the recoupled seal may fail at a lower fluid pressure than an undamaged seal. A further known fluid coupling is described in DE 20007478U1 which relates to sewage network system. Yet another fluid coupling is described in US 3,127,149 which relates to a valved hose coupling for connecting and disconnecting high pressure air lines associated with pneumatic systems.

[0004] It is an object of the present invention to attempt to overcome at least one of the above or other disadvantages. It is an aim of the present invention to provide an improved coupling wherein the risk of damaging a seal transitioning across a relatively large gap is reduced.
[0005] According to the present invention there is provided a fluid coupling as set forth in the appended claims. Other features of the invention will be apparent from the dependent claims, and the description which follows.
[0006] In the exemplary embodiments a vent is provided between a sealing surface and a gap. An aperture to the vent on the sealing surface is relatively small so that fluid pressure does not act to deform the seal as it cross said aperture. Said aperture is spaced off-set from the gap on the sealing surface. The off-set provides a portion of sealing surface adjacent the gap and between the gap and aperture against which the seal can contact. The vent acts to allow fluid to enter the gap before the seal starts to cross the gap and to therefore act to equalise pressure on either side of the seal. Consequently, as the seal transitions across the gap and the sealing between two parts is lost, the fluid pressure imbalance that would otherwise act to deform the seal into the gap has been reduced. The risk of seal damage during the transition has also therefore been reduced.

[0007] For a better understanding of the invention, and to show how embodiments of the same may be carried into effect, reference will now be made, by way of example, to the accompanying diagrammatic drawings in which:

Figure 1 shows a prior art example of a seal transitioning across a gap;

Figure 2 shows a cross-sectional partial view of a fluid coupling according to an exemplary embodiment showing a seal transitioning across a gap.

[0008] Referring to Figure 2, a part of a fluid coupling is shown. It will be appreciated by those skilled in the art that the fluid coupling may be any type of fluid coupling wherein a part slides relative to another part and a seal closing a separation (S) between the two sliding parts has to transition across a gap (G). For instance, the seal may be an annular seal such as an o-ring seal wherein the seal is carried on the first part and the gap on the second part. Here, one of the parts may be a probe or piston and the other a socket. A description of the wider coupling is not necessary and is therefore omitted here.
[0009] In figure two, the two parts that slide relative to each other are labelled a first part 100 and a second part 200. The first part 100 carries the seal 300. In a first arrangement (Figure 2A), the seal 300 seals the separation between the two parts. As will be widely understood, fluid 400 on one side of the seal is prevented from escaping to the other side by the seal. The fluid pressure can be high and cause a pressure imbalance between the two sides of the seal.
[0010] The second part includes a gap. The gap is an area having a localised increase in the separation distance between the two parts. For instance the gap may be a channel or groove in the second part, or the second part may be an assembly of two separate components that are joined together. The second part also includes a vent 210. The vent is a passageway that extends between an aperture open to the gap and an aperture on a sealing face of the second part spaced from the gap. The aperture on the sealing face is spaced approximately the same distance as a thickness of the seal. That is, the spacing is such that there is sufficient sealing surface between the edge of the gap and the aperture for the seal to locate. The aperture on the sealing surface can be machined or formed into the coupling in a precise and controlled manner and is arranged to be sufficiently small that the fluid pressure does not force the seal to deform into the aperture.
[0011] In the exemplary embodiments, the vent is shown as an aperture having an elbow. Suitably formed by drilling two blind bores to meet. However, other fluid passageway design are envisaged, that create the vent between the two surfaces.
[0012] During operation of the coupling, the seal 300 is caused to transition from one side of the gap to the other. Once a sealing point of the seal moves past the aperture to the vent on the sealing surface, fluid is able to enter the vent. At this point in the transition, the seal has not started to cross the gap to allow the fluid to enter the gap between the seal and sealing surface. However, fluid can now enter the gap through the vent. Consequently, the fluid pressure on either side of the seal is equalised, or at least partially equalised. As such, when the seal reaches the gap, the fluid pressure acting on the seal and which would otherwise force the seal to deform into the gap is reduced due to the equalising or part equalising of the pressures on either side of the seal. The seal can therefore transition across the gap with no or substantially reduced deformation into the gap. Therefore the risk of causing damage to the seal during the transition is reduced or removed.
[0013] Although a few preferred embodiments have been shown and described, it will be appreciated by those skilled in the art that various changes and modifications might be made without departing from the scope of the claims.

the second part (200) includes a gap (G) in the sealing surface, across which the sealing part (300) is arranged to transition;

2. The fluid coupling of claim 1, wherein the second part (200) is formed from a first section and a second, separate section, the gap (G) being formed by a junction between the first and second sections.

4. The fluid coupling of any preceding claim, wherein the vent (210) comprises a bent fluid passageway between the respective apertures. 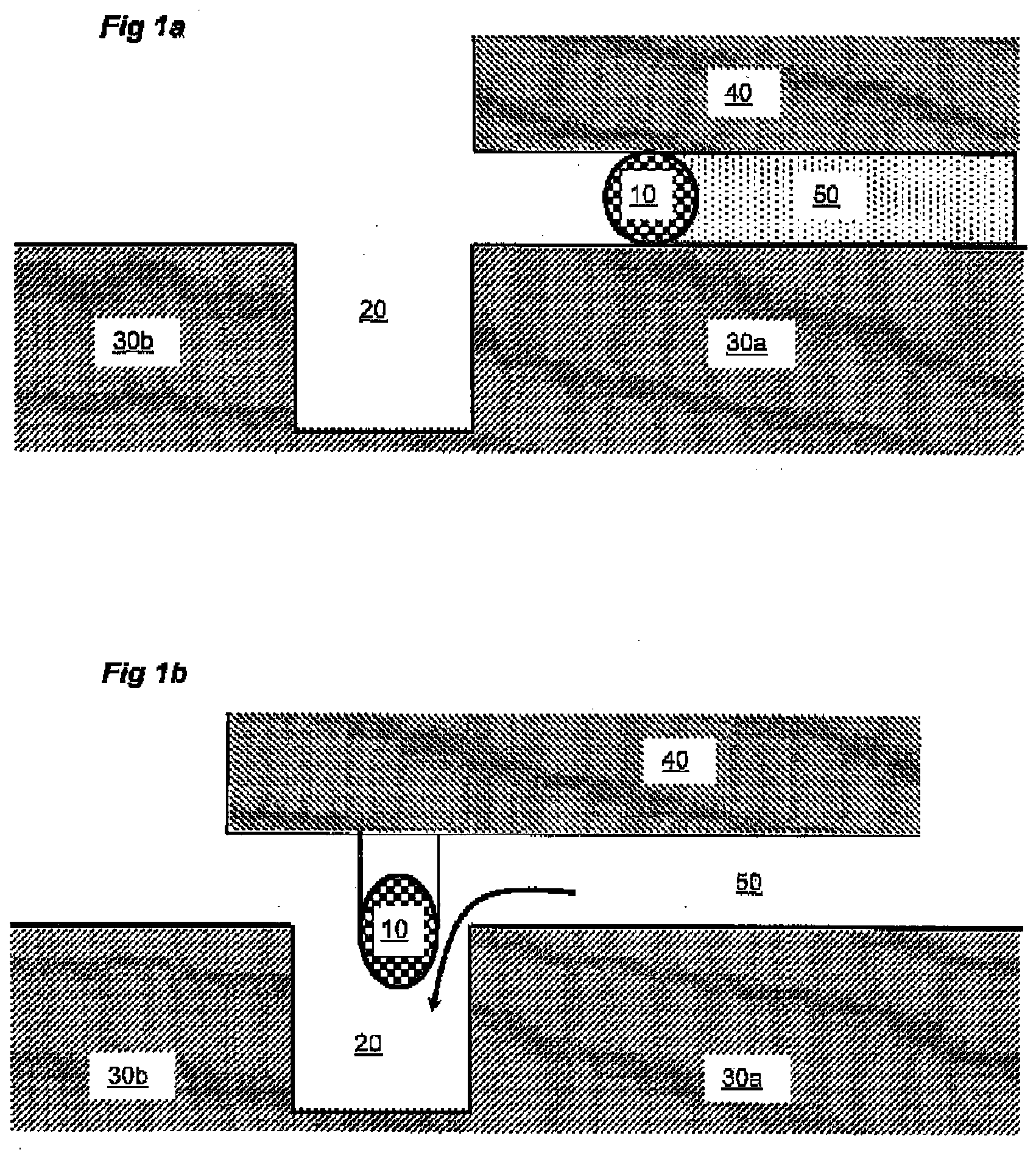 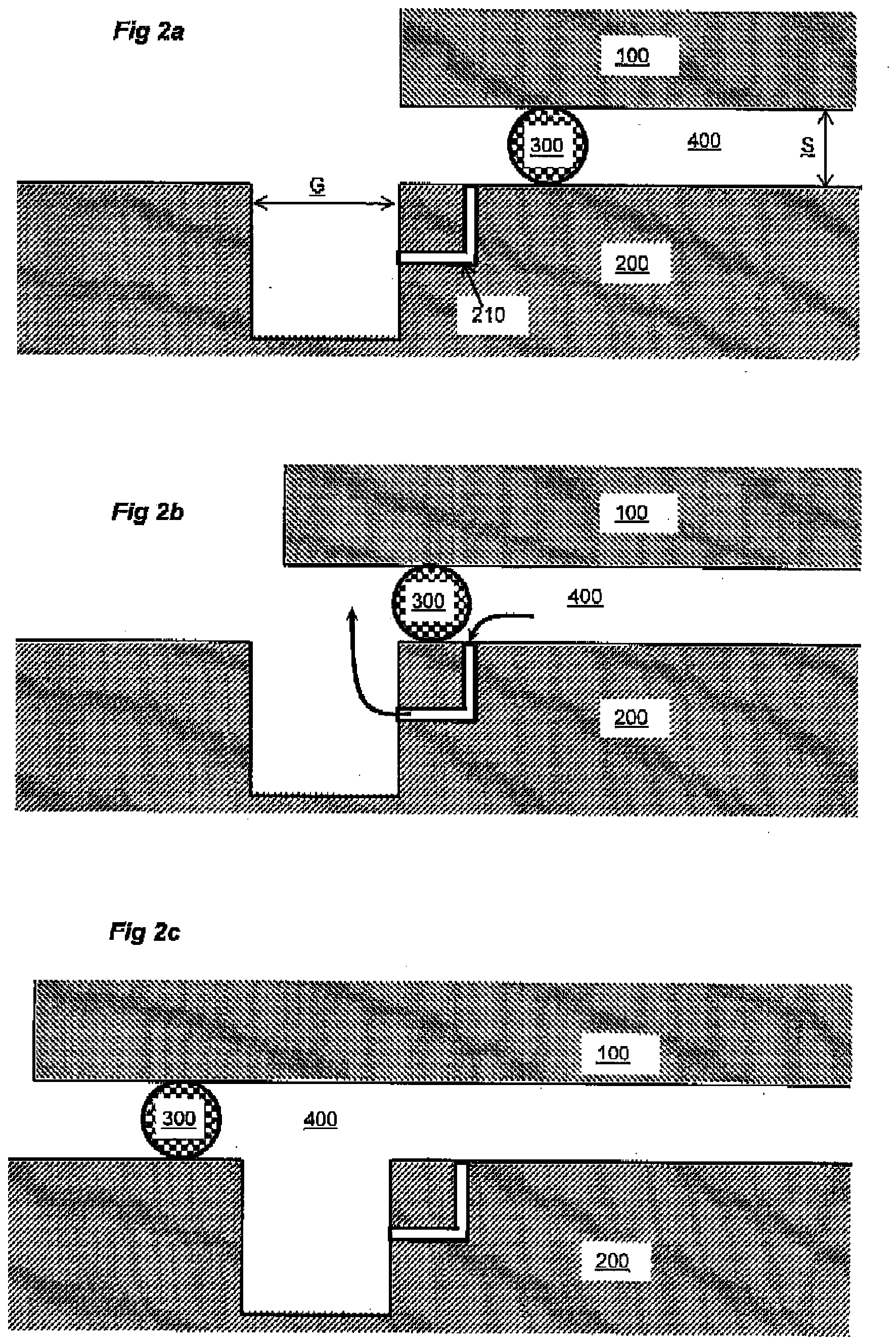