[0001] The present invention refers to an antimicrobial composition for coating surfaces that provides a reduction of up to one hundred percent of the microbial activity on any type of frequently used substrate or surface.
[0002] Moreover, a process for preparing the composition is provided.

Fig. 1: Table showing the distribution of particles in the composition once applied to the surface.

BRIEF DESCRIPTION OF THE INVENTION

[0025] The present invention relates to an antimicrobial composition for coating surfaces and to a process for preparing said composition intended to address the problem of the possible shortcomings in the time of response, efficiency, and efficacy of the asepsis of surfaces that may have microbial activity.
[0026] The composition and process are based on the combination of copper particles and binding agents that enable the coating to adhere to the substrate to which it is applied with the purpose of obtaining a covered surface that is capable of eliminating the microbial activity on the surfaces exposed to the composition by up to one hundred percent.
[0027] The composition operates in three phases or stages that interact to facilitate the antimicrobial action of the copper particles, enabling the surfaces to which it is applied to be used without the risk of contamination or contagion by microbes.

[0028] The invention corresponds to an antimicrobial composition for coating surfaces, composed of micronized and micrometric high-purity metallic copper, and optionally nanometric metallic copper, with a distribution of particles of various shapes, sizes, and proportions in a fluid vehicle to be applied cold and hardened by polymerization mechanisms (see Figure 1).
[0029] The particles that are used are of various shapes and sizes:
[0030] The size distribution ranges from 1 micrometer to 50 microns. The diversity of the shapes and sizes of the metallic particles allows obtaining surfaces having up to 100% antimicrobial protection, as shown in Fig. 1.
[0031] Unlike other coating-type products that contain particles, nanoparticles, or pigmentations of copper and other active substances that act as biocides or bactericides, the saturation of shapes and dimensions of present invention ensures a permanent antimicrobial action over time based on high-density metallic copper, which renders it distinctive and differentiating, since it is equivalent or superior in its functionality to the application of a metallic copper coating.
[0032] The antimicrobial action of the composition according to the present invention operates in three phases or stages that interact with one another:
[0033] This combination of different types of copper particles and the polymer thus facilitate the antimicrobial action of the copper by facilitating the ionic capacity of the material, thus enabling antimicrobial action to be achieved that is up to 100% effective, making it possible for the surfaces to which it is applied to be used without the risk of contamination or contagion by microbes. This improved ionic effect is therefore due to the geometry of the particles and the distribution thereof in combination with the polymer.
[0034] As regards the copper content of the composition, it is greater or equal to 30% and up to 90% with respect to the weight of the final composition.
[0035] The polymer corresponds to a binding agent hardened by crosslinking, and capable of adhering well to the surface to be coated or substrate. The use of a polymer allows obtaining a coating that easily covers the entire shape or geometry of the substrate.
[0036] The polymers to be used include epoxy coatings such as polyamide epoxy resin, polyurethane, and polymethyl methacrylate, among others.

[0037] The process described below is illustrative and thus, the manner in which the particles are made described accordingly, does not limit the type of particles used in present invention.
[0038] The particles are prepared by means of thermal induction melting processes and subsequent pulverization in inert gas media at low temperature in order to prevent metal oxidation. Spherical and hemispherical particles are obtained in this way which are sieved in order to obtain particles in a granulometric range between 1 micron and 50 microns, with a mean of 25 microns.
[0039] A fraction of these particles, preferably between 10 and 20% of such particles, is separated and treated in ball and roller mills in order to obtain the laminar and amorphous particles. The filamentous particles have a weight of up to 10% of the total weight of the particles and are obtained independently from the other types of particles by means of techniques using microwires obtained by melting copper inside glass capillaries, which are wound on a spool from which they are cut in lengths of less than 50 microns.
[0040] To produce the coating, premixing is performed only of the laminar particles, which provide the characteristic copper color, stabilized with the zinc additive, and with the resin, which contains thixotropic additive of the pyrogenic siliceous type. The nanometric particles, and the larger-sized amorphous, spherical and hemispherical particles are incorporated subsequently and only at the moment the product is prepared and within the "mixing lifetime" of the resin with the hardener, for which reason they are delivered in an accompanying container. This finally results in a product with 3 components - the pigmented base, hardener, and system-activating particles.

MANNER OF APPLICATION AND MECHANISM OF ACTION

[0041] To apply the composition, the first step is to make a preparation and clean the substrate to which the composition is to be applied. The resin base, which contains the thixotropic and stabilizing additives of Zn phosphate with the larger-sized activator particles, is then mixed, and then it is mixed with the hardening reagent. The composition is applied using airless equipment (airless projection).
The product that is applied contains copper particles that float in contact with the surface and the internal medium of the coating.
[0042] Once the surface to which the coating was applied has been cleared for use, an electrostatic activation process is performed after which it begins to release its antimicrobial capacity.
[0043] The precise mechanism explaining the antibacterial activity of copper has not been completely elucidated. However, one crucial element of the antibacterial activity is the ability of copper to give off and accept electrons in a continuous process.
[0044] Some studies suggest that, in high concentrations, copper has a toxic effect on bacteria due to the release of hydroperoxide radicals; the copper ions may potentially substitute ions that are essential to bacterial metabolism, such as iron, initially interfering with the function of the cell membrane and then, in the cytoplasm, altering the protein synthesis, either by inhibiting the formation of proteins or causing the synthesis of dysfunctional proteins, thus altering the activity of enzymes that are essential to bacterial metabolism.
[0045] The sequence in which the copper particles act on the bacteria is:

[0046] Since it micrometric copper, it is not toxic to users who are exposed to the coated surfaces. In reference to the use of nanometric particles, those are also made of metallic copper.
[0047] The resulting coating attains high levels of wear resistance and complete adhesion to a variety of substrates, offering 100% antibacterial protection against the bacteria defined in the standard or protocol of the Environmental Protection Agency (EPA).
[0048] The composition according to the present invention contains only binders and metallic copper particles, which renders it safe in comparison to alternative products, which contain active ingredients that are possibly toxic and solvents that limit the application thereof in closed spaces and are not safe for use on surfaces that are in direct contact with users.
[0049] Another advantage lies in the fact that application can be performed at low temperature, making it suitable for all surface types and reducing the application costs in comparison to products with a similar copper content, which are applied at high temperatures.

[0050] Although the resin contains thixotropic additives, it was found that, due to the density and shape of the larger-sized spherical, amorphous and filamentous particles, they sediment out a few days after having been incorporated; for this reason, the resin base is delivered with thixotropic additives of pyrogenic silica and Zn phosphate additives that stabilize the oxidation of Cu together with the laminar particles in a proportion of 1 to 3%. The larger size amorphous particles and spherical particles on the order of 50 microns are delivered separately in order to be incorporated only at the time of application simultaneously with the hardener; wherein between 30 and 90% by weight of spherical particles of high-purity metallic copper are incorporated. The lifetime of the mix is less than one hour at 20 °C, with the lifetime decreasing at higher temperatures.
[0051] In a preferred embodiment of the invention, the particles used in the first phase are larger size amorphous particles, providing increased adherence in comparison with regular spherical or semispherical particles.

Methodology: Protocol for the analysis of antibacterial activity on solid surfaces that contain copper.

[0053] The protocols described by the United States Environmental Protection Agency (EPA) were used in order to determine the disinfectant efficacy of surfaces containing copper,1 with slight modifications.
[0054] Briefly, the problem samples (type A: A1, A2, A3; type B: B1, B2, B3) were sterilized with sodium hypochlorite (20% v/v) and ethanol (70% v/v) for 24 hours. Each sample was then placed in a plastic petri dish and allowed to dry in a laminar flow chamber for 1 hour, with UV radiation being applied to each side for 15 minutes.
[0055] Each sample was evaluated using an inoculum of Escherichia coli O157:H7 (ATCC 43895) or Staphylococcus aureus (ATCC 29213) containing between 1 x 107 and 5 x 107 bacteria.
[0056] The inocula of E. coli and S. aureus were obtained by growing the bacteria overnight on Luria Bertani (LB) broth and brain heart infusionbroth, respectively. One-hour post-inoculation, each sample was washed with 1 ml of saline phosphate buffer solution (PBS), and the bacterial count was performed by means of dilution series.
[0057] The bacterial count for E. coli and S. aureus was performed by plating 10 µl of each dilution on LB agar and Baird Parker agar, respectively.
[0058] The LB agar and Baird Parker agar plates were incubated at 35 ± 2 °C for 24 and 48 hours, respectively. The plates containing between 10 and 200 colony-forming units (CFUs) were recorded. The evaluation was performed in experimental and technical duplicate.

[0059] Number of viable bacteria per sample:

V = volume of PBS added for each specimen, in ml

[0063] In all of the assays performed with type-A1-3 and type-B1-3 samples, no viable bacteria were observed after one hour of contact (Fig. 2B). Consequently, the reduction in the bacterial load was 100%.

[0066] In all of the assays performed with type-A1-3 and type-B1-3 samples, no viable bacteria were observed after one hour of contact (Fig. 2B). Consequently, the reduction in the bacterial load was 100%.
[0067] The results obtained suggest that the type-A and type-B samples can be preliminarily categorized as having disinfectant effect against E. coli O157:H7 and S. aureus when the described methodological protocol is implemented. More studies and replications are needed to corroborate the results obtained.

b. separating a fraction of the spherical and hemispherical particles, treating them in mills, and obtaining laminar and amorphous particles;

d. mixing only the laminar particles and a resin; and

e. incorporating the larger-sized particles into the previous mixture at the time of the preparation of the product and within the "mixing lifetime" of the resin with the hardener. 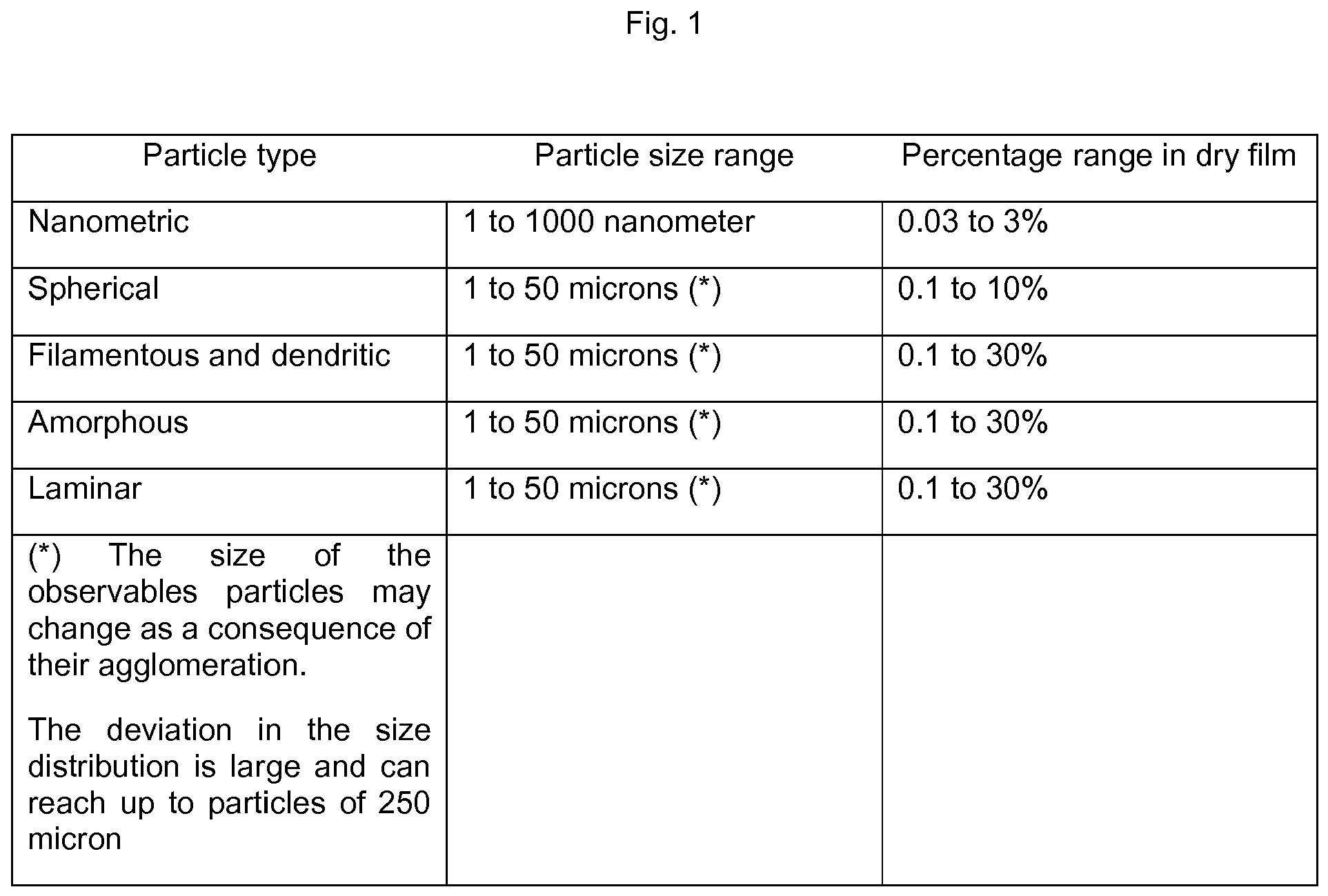 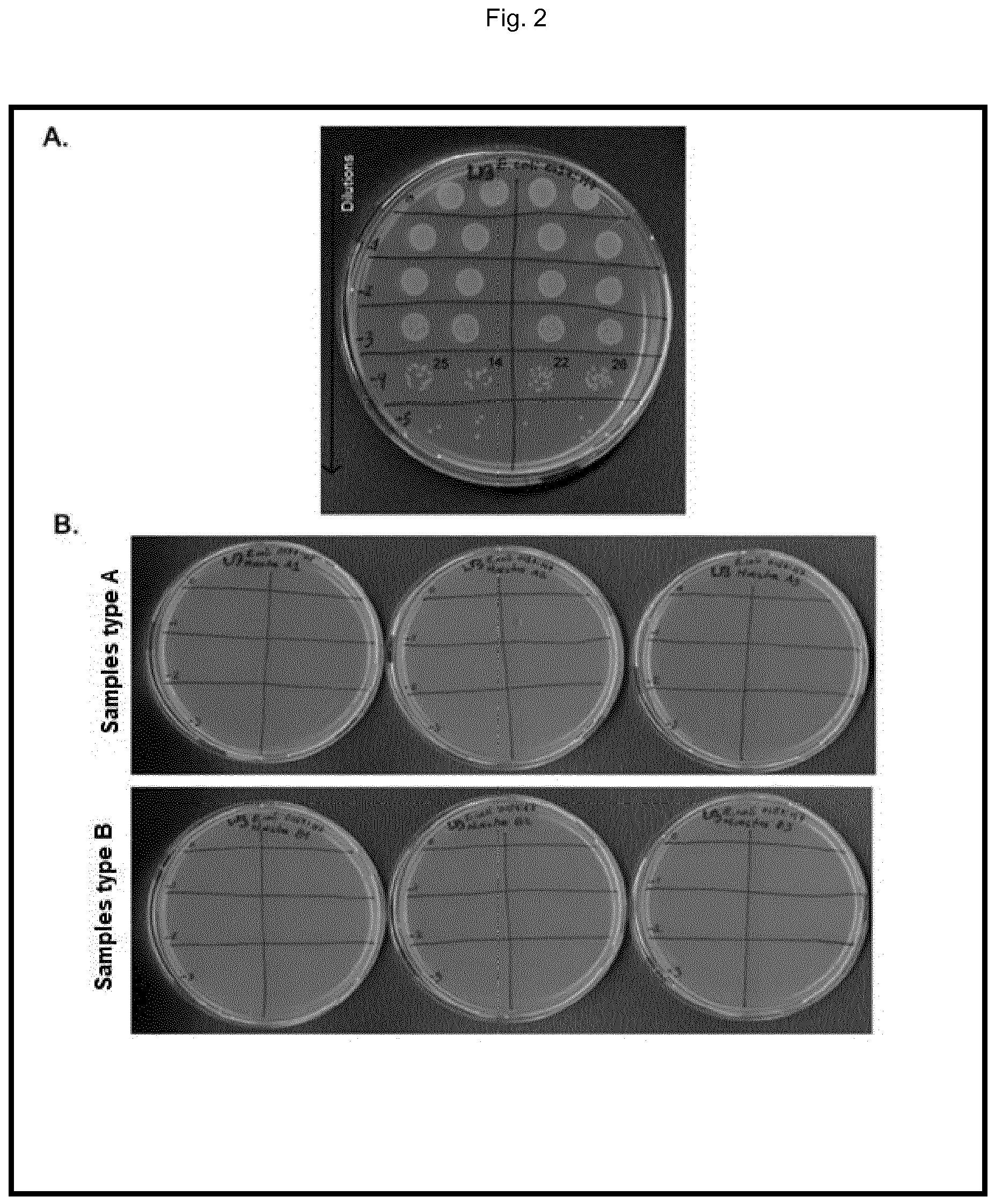 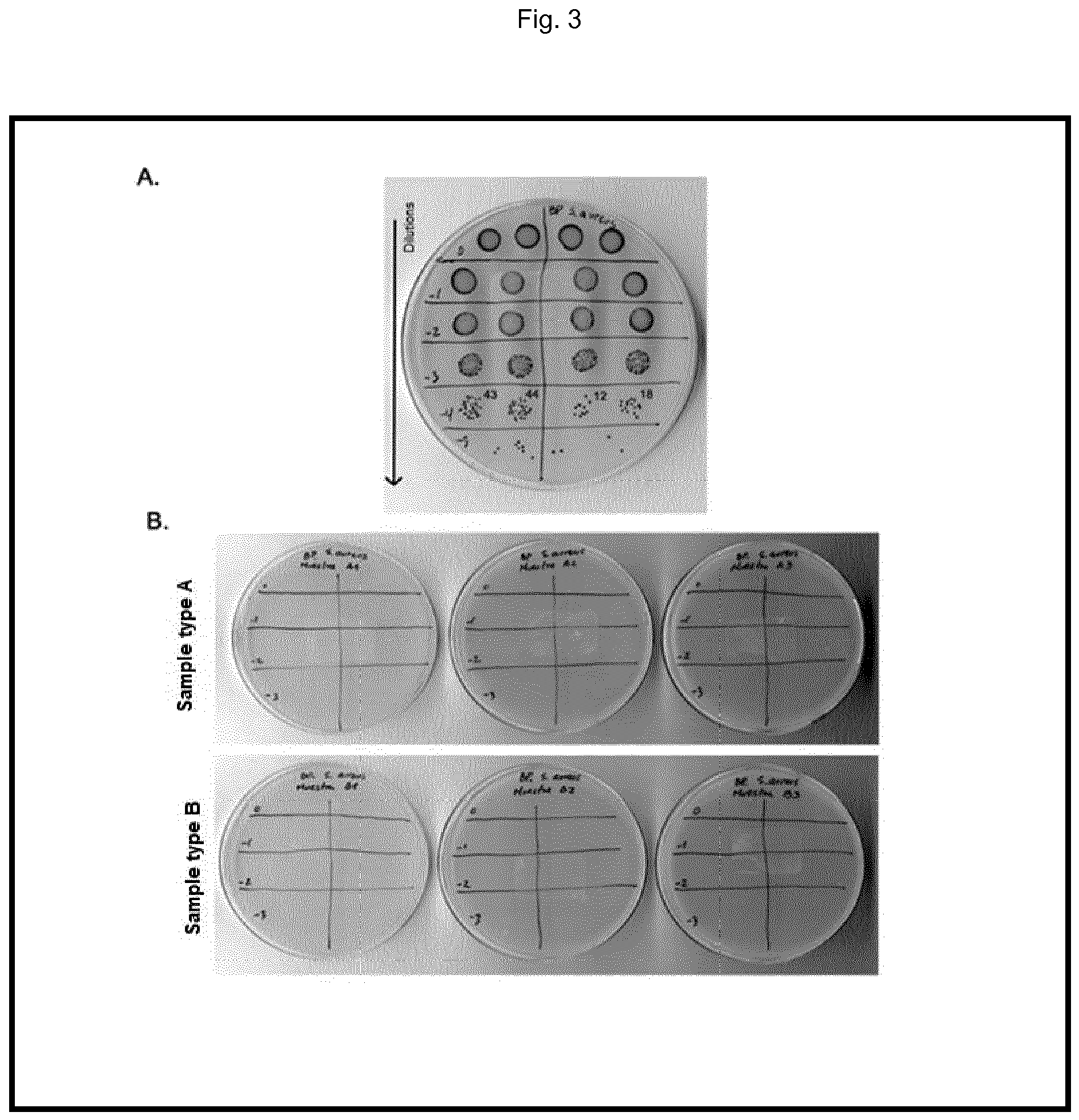 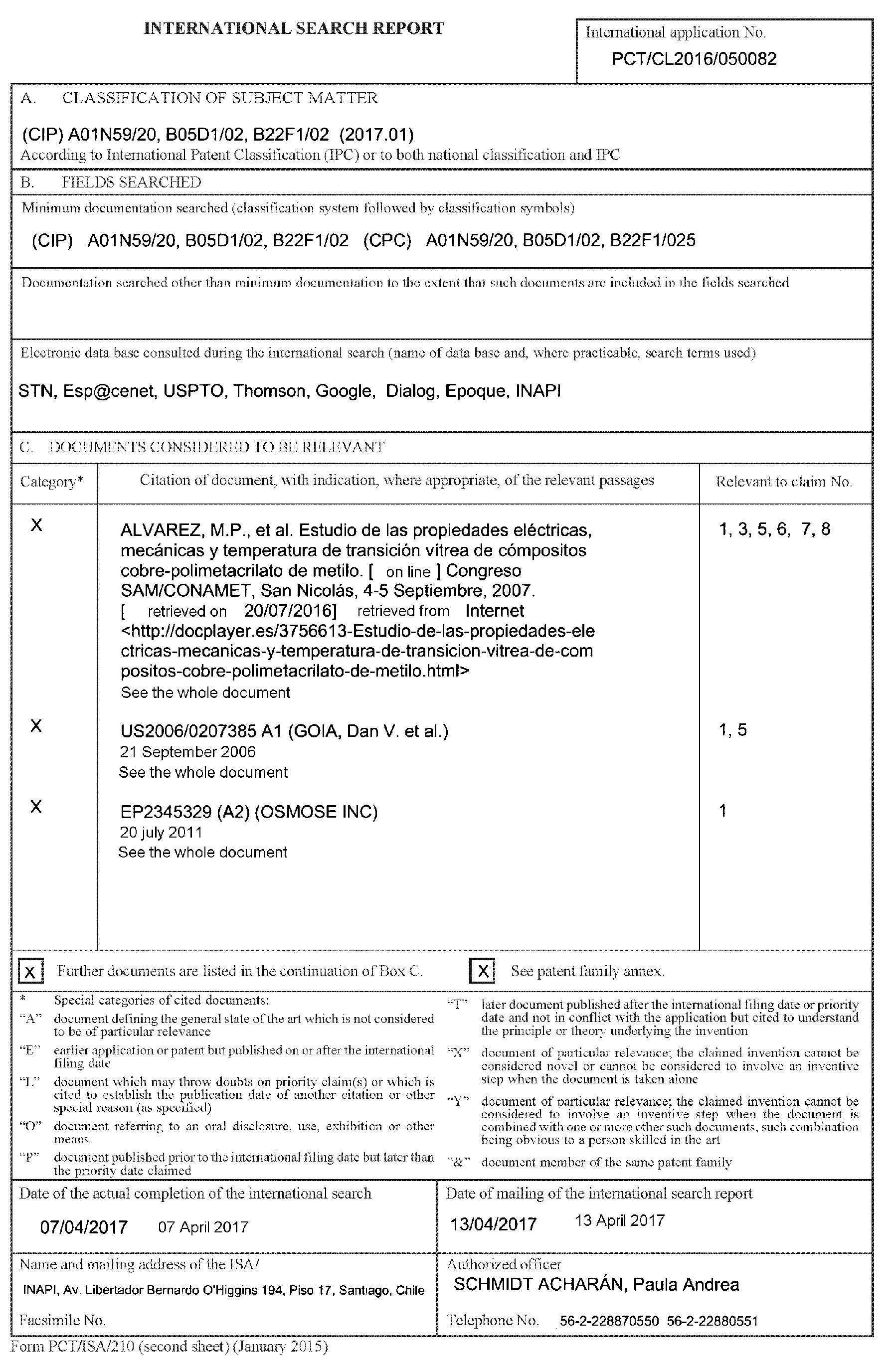 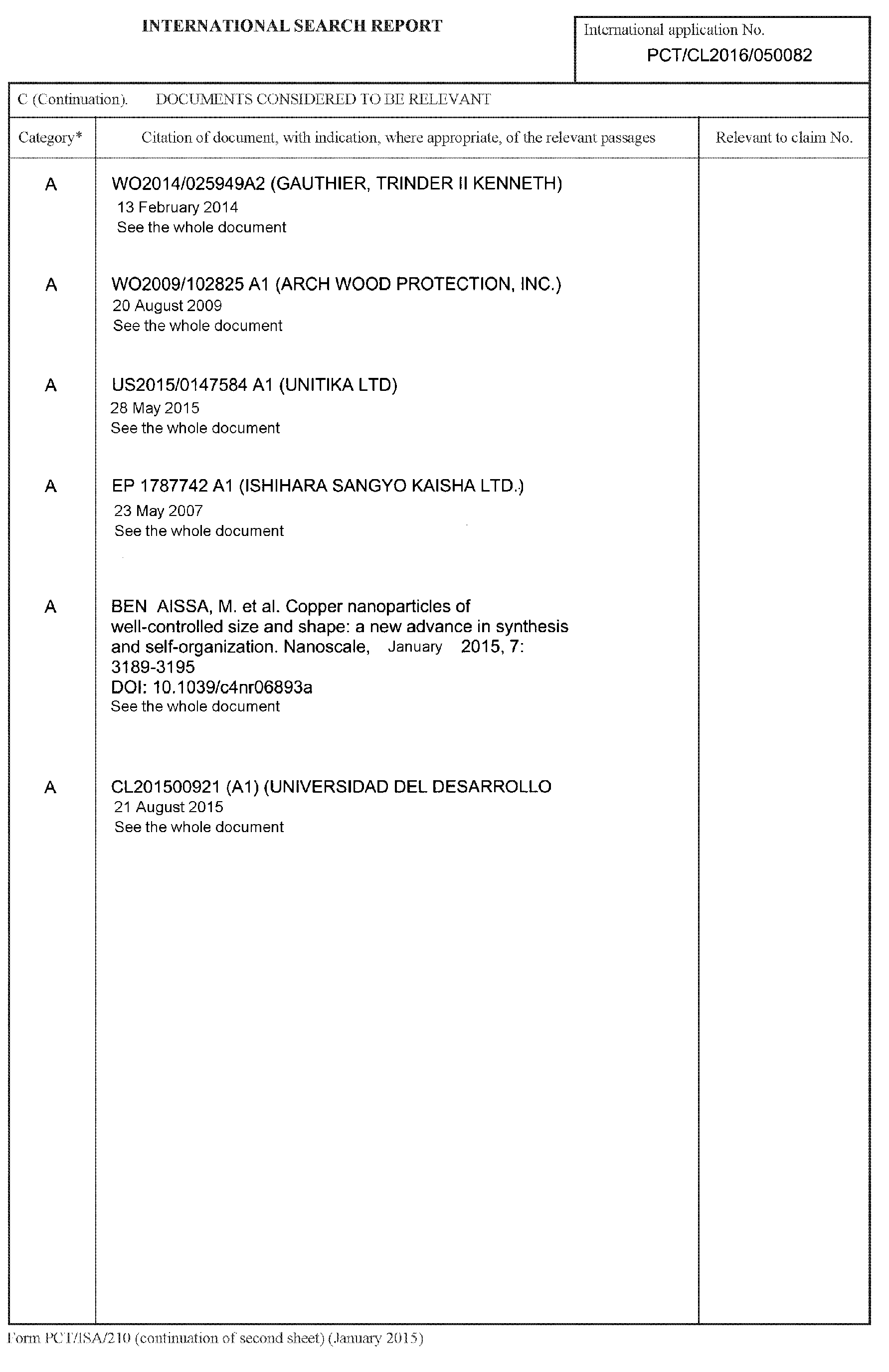 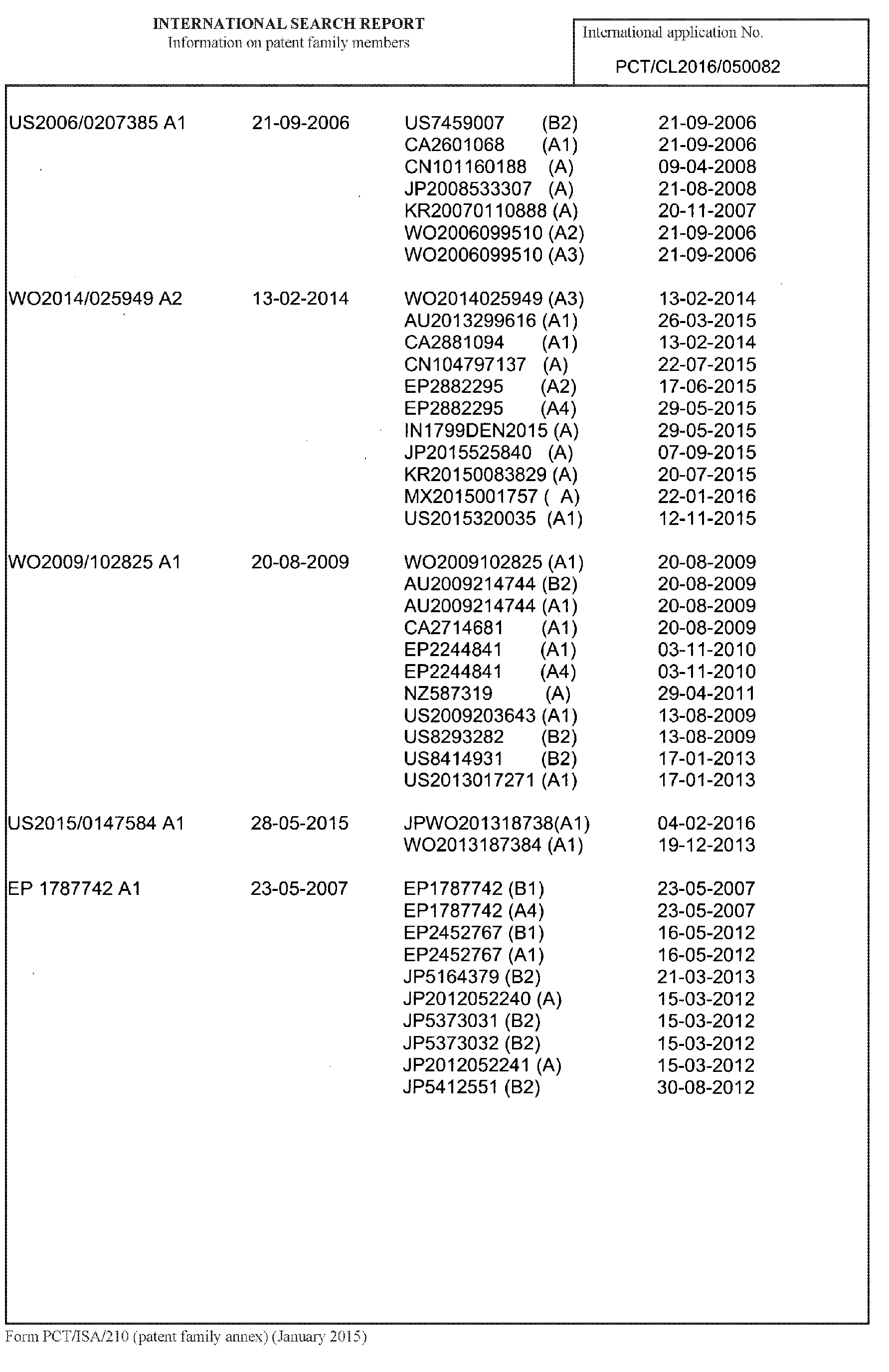