[0002] The present invention relates to an implant with suture pockets having suture holes.

[0003] Orthopedic surgeries may require implants to be attached to soft tissue and/or tuberosities by sutures. By way of example but not limitation, a fracture occurring in the proximal region of the humerus may require a shoulder prosthesis with multiple suture holes by which the prosthesis can be attached to the body. Attaching sutures to an implant requires a surgeon to successfully insert suture needles through these suture holes and therefore requires considerable time, skill and effort. Manipulation of suture needles through the narrow suture holes which are often located in tight, inaccessible locations can be challenging especially during surgery. A surgeon must precisely place a needle tip through the narrow suture hole for successful needle insertion, and repeat this step many times over to complete implant attachment to body.
[0004] Suture holes on implants such as a shoulder prosthesis are generally located on a fin or a flange to allow for soft tissue attachment. A vertical array of circular suture holes is provided on a fin to maximize visibility. Suture hole openings are generally flush with the fin surface. Therefore, suturing these holes will require precise location of the needle tip into the circular opening. If a surgeon misses the circular opening and contacts the needle tip to the fin surface, the surgeon must attempt again to successfully target the circular opening. Furthermore, a curved suture needle is generally used in such procedures and makes targeting the narrow suture hole openings more challenging and time-consuming for a surgeon. Furthermore, fins or flanges containing suture holes generally extend from the implant body into soft tissue or bone and will consequently require additional effort in positioning, and implanting the prosthesis.
[0005] Therefore, there exists a need for improved suture passages and a method for attaching sutures to an implant having the same.
[0006] US 2006/0189987 A1 discloses a humeral fracture fixation system including a nail-plate fixation device having a plate-like head portion, an intramedullary nail portion, and a bent neck portion therebetween which creates an angle between the plate and nail portions. The head portion includes locking holes for receiving fixed-angle bone support elements, and K-wire alignment holes. The front of the head portion includes suture holes while presenting a smooth profile.
[0007] US 2011/0130840 A1 discloses an attachment device that secures soft tissue to an orthopedic prosthetic implant or bone. The attachment device includes a receptor surface, an attachment plate with an attachment surface, and fasteners. The receptor surface can be formed on the implant or on a separate receptor plate. The receptor surface accepts the soft tissue and/or a bony structure, the attachment plate at least partially covers the receptor surface, and the fasteners secure them together to compress and hold in place the soft tissue and/or a bony structure.
[0008] WO /012376 A1 discloses an implant for repairing a defect in a bone structure. The implant comprises a U-shaped suture channel which extends along a centre line through the implant and which has first and second end openings opposite each other opening to a common face. In an aspect the suture channel has a middle portion with a first size in cross section with respect to the centre line of the suture channel and at least one of the end openings has a second size in cross section larger than the first size. In another aspect the first and second end openings of the U-shaped suture channel are formed by a first hole and a second hole extending into the implant from the common face in respective first and second directions extending into the implant from the common face, the first hole and the second hole communicating within the implant and providing the U-shaped suture channel through the implant, for guiding curved suture needles through the suture channel.

[0010] A more complete appreciation of the subject matter of the present invention and the various advantages thereof can be realized by reference to the following detailed descriptions, in which reference is made to the accompanying drawings:

FIG. 1 is a partial perspective view of a humeral stem of a shoulder prosthesis with suture holes according to one embodiment of the present invention;

FIG. 3 is a top view of a suture hole according to an example, which does not form part of the present invention;

FIG. 4 is another top view of a cross section along line A--A of the suture hole including a curved suture needle;

FIG. 5A and 5B are perspective views of the humeral stem of the shoulder prosthesis shown in FIG. 1;

FIG. 6A is a top view of the humeral stem of the shoulder prosthesis shown in FIG. 1;

FIGS. 6B is a side elevation view of the humeral stem of the shoulder prosthesis shown in FIG. 1; and 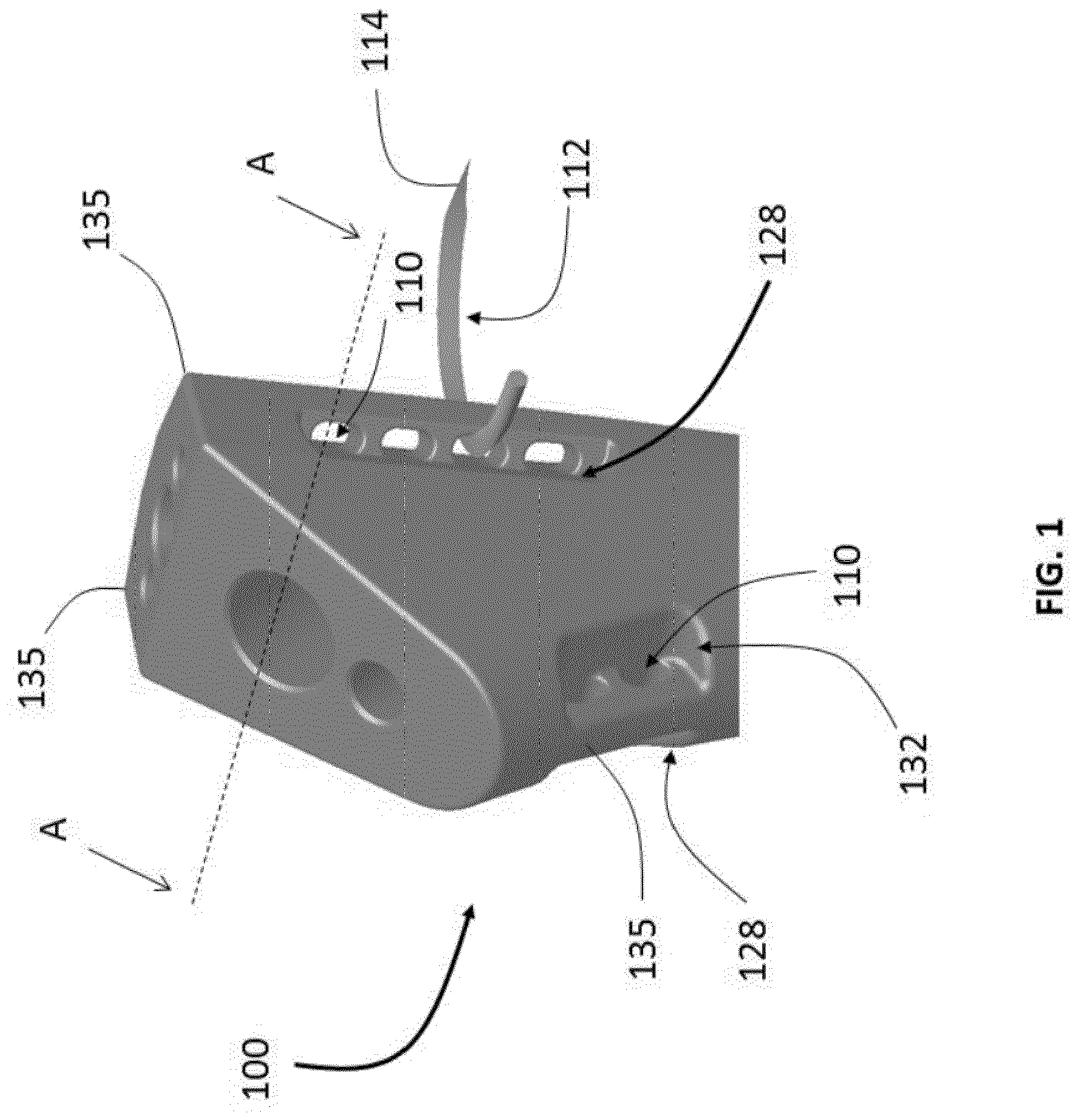 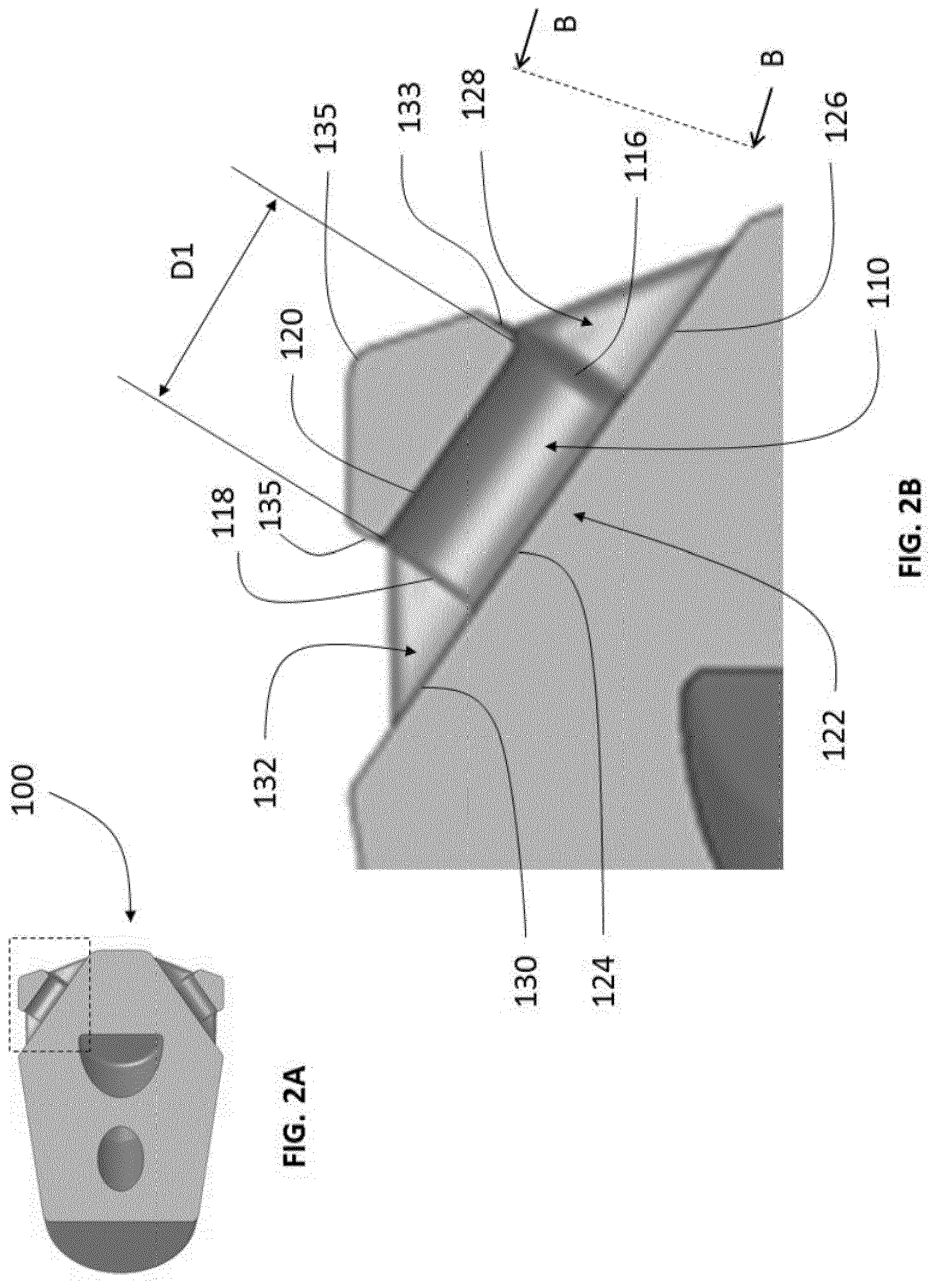 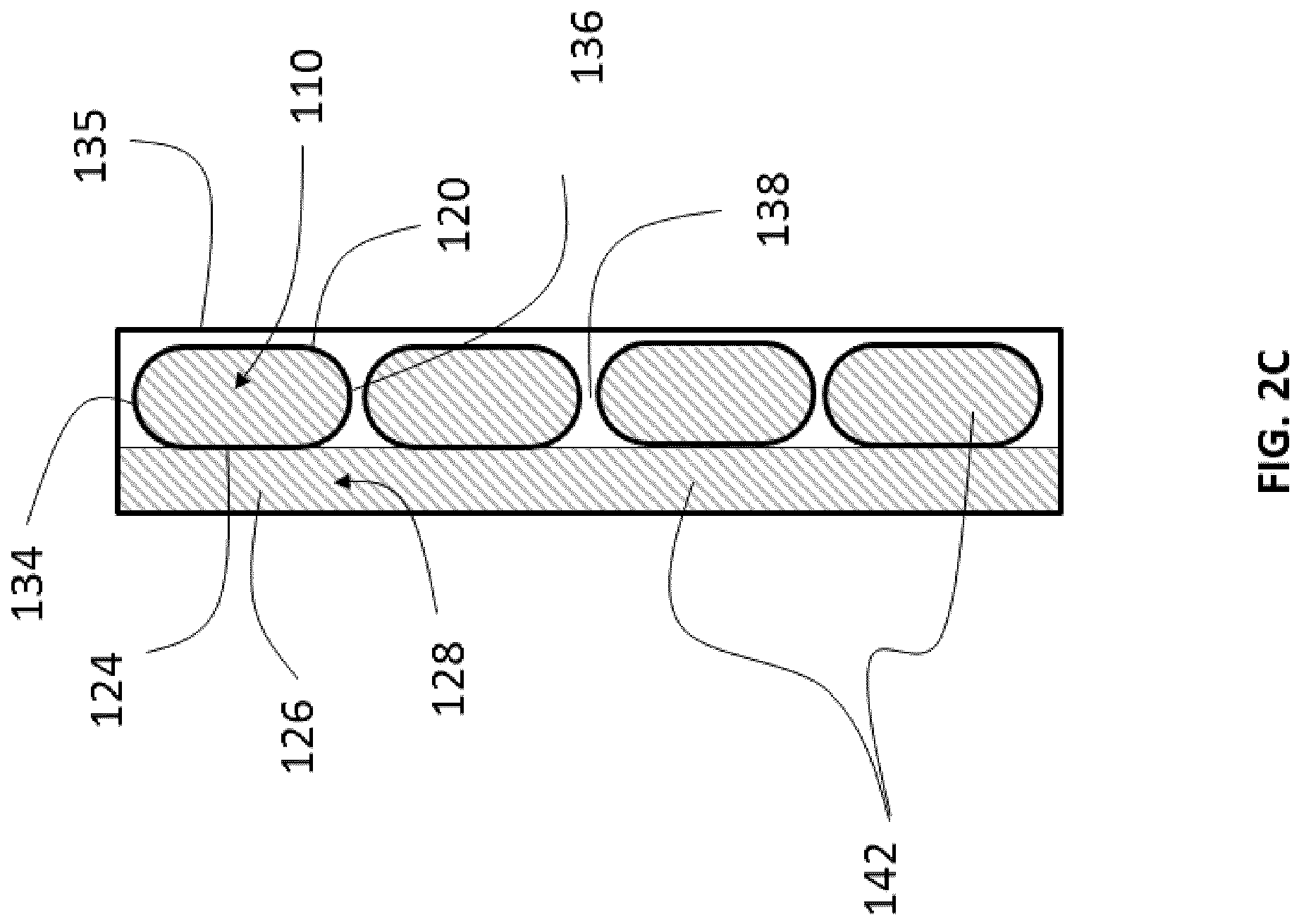 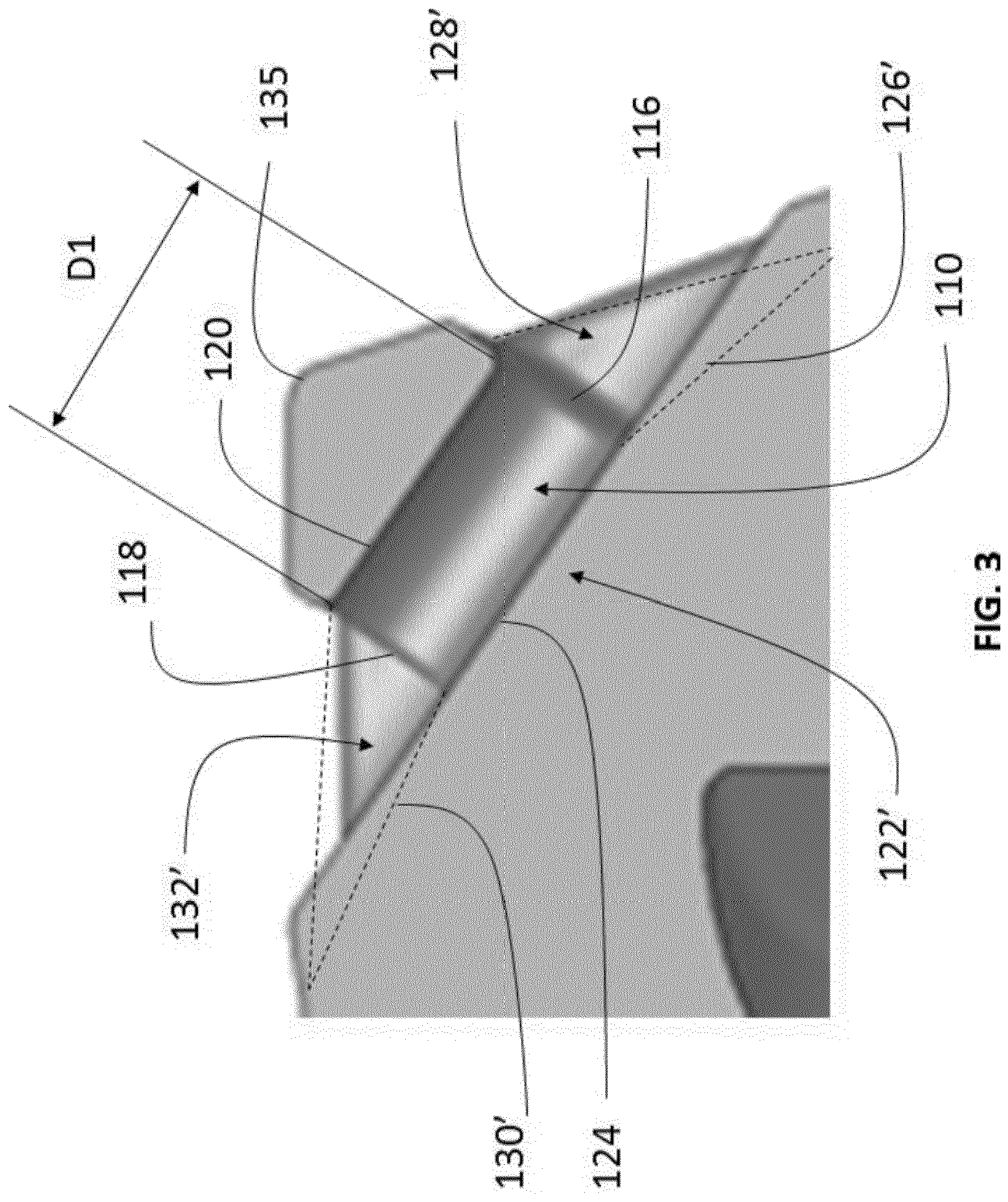 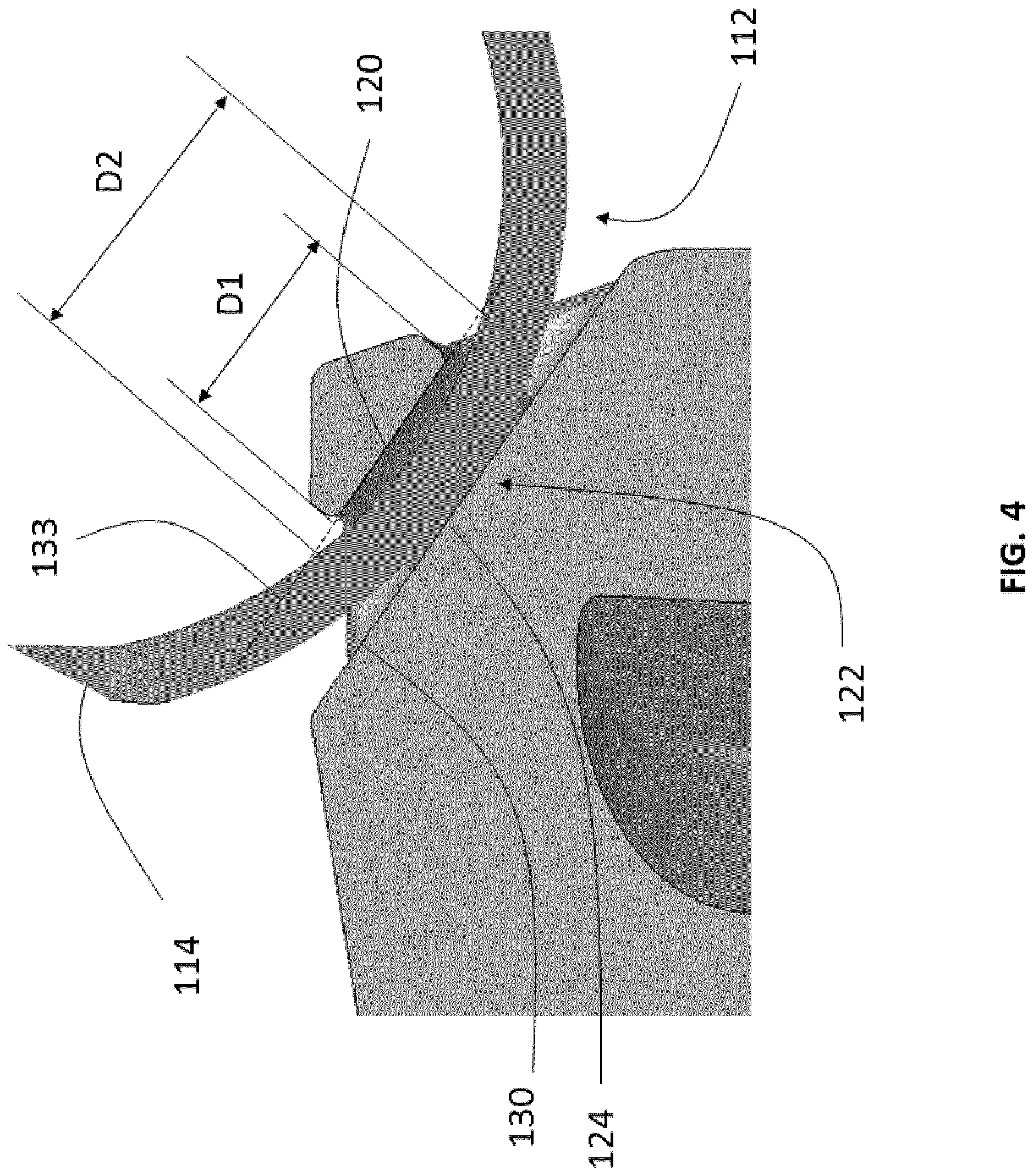 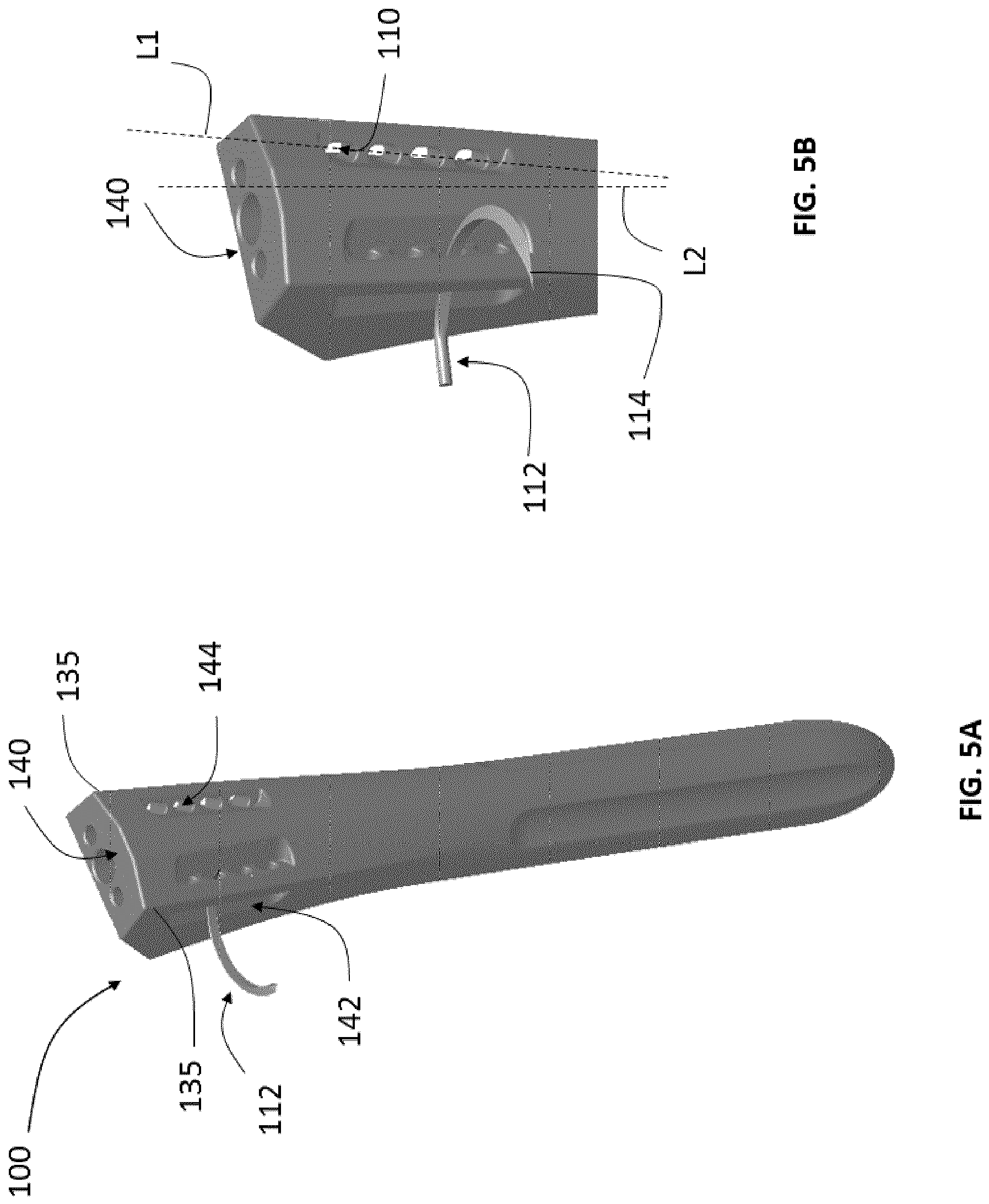 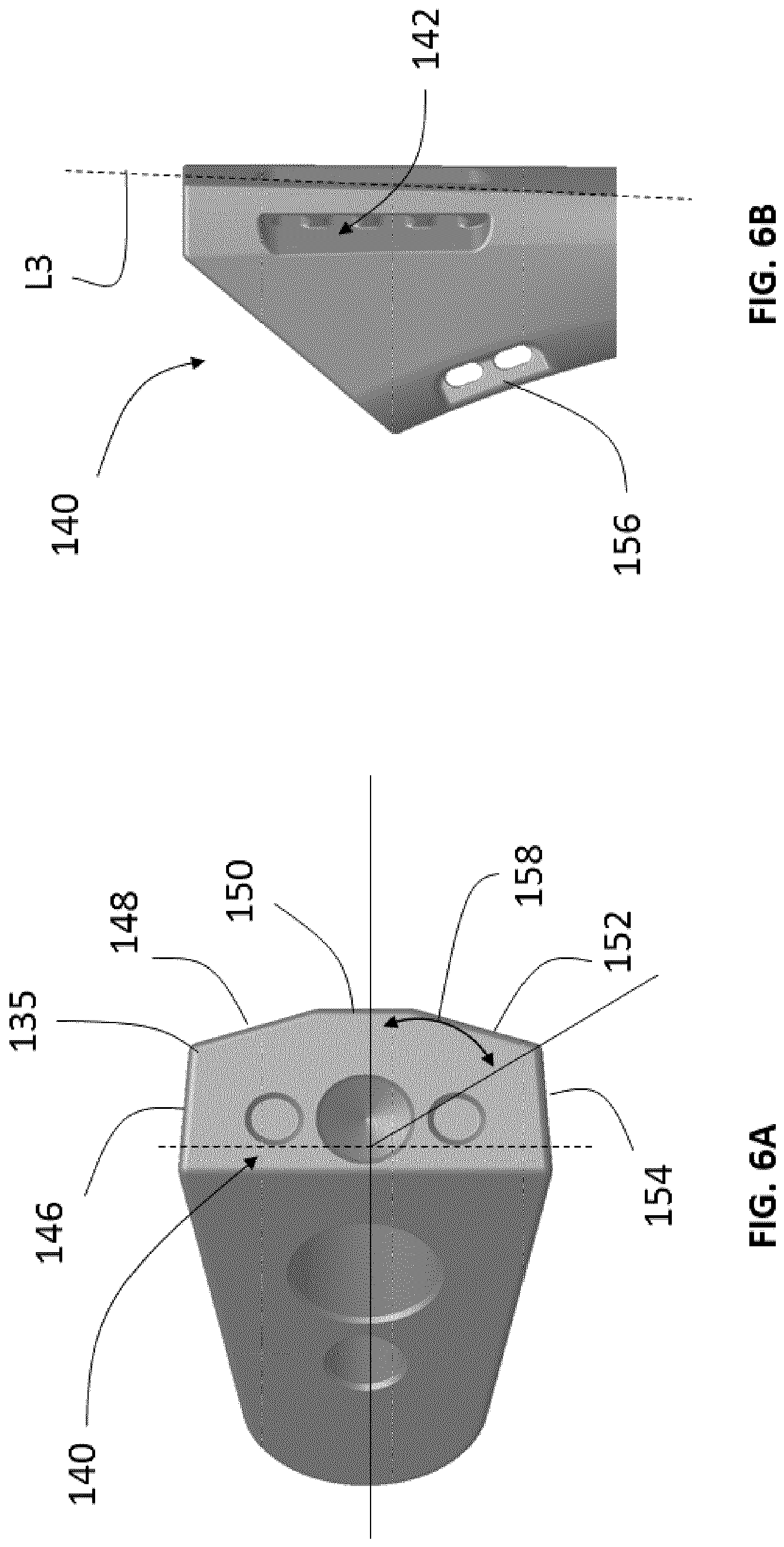 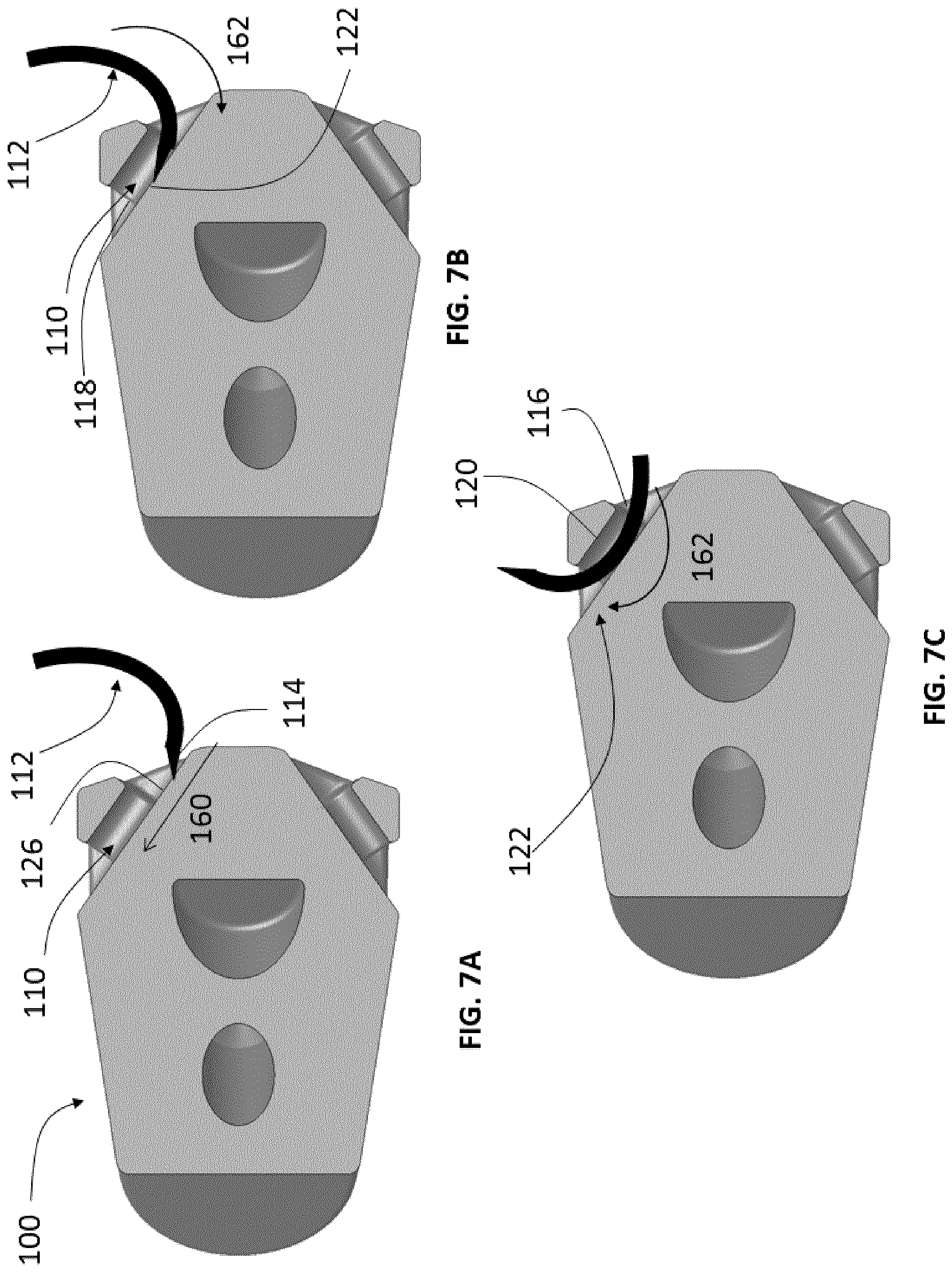