[0001] This disclosure relates to a method and system for managing a service provider's infrastructure, regardless of whether that infrastructure includes services and/or equipment of multiple different vendors.

[0002] A service provider is a company that makes one or more services (e.g., telecom, internet, cable TV, satellite TV, etc.) available to its customers or subscribers.
[0003] One example of a telecommunication service is a telephone subscription, which may include, for example, access to telephone services on a prepaid, fixed or unlimited subscription plan. The telephone service may use any one of a variety of different networks (e.g., 3g, 4g, LTE), have different caps or limits, include voicemail service (or not), include multimedia service (or not), include short message service (SMS) (or not), etc. Some subscription plans may include telephone services as well as other services, such as television over cable, fiber or satellite, etc.
[0004] Service providers typically own or rent infrastructure that supports providing the services. The infrastructure may include, for example, one or more network elements that facilitate rendering the services. Network elements are devices (e.g., Remote Authentication Dial-In User Services (RADIUS) routers, Home Location Registers (HLR), Digital Subscriber Line Access Multiplexer (DSLAM), soft switches, web servers, (DOCSIS) cable modems, embedded multimedia terminal adapters (E-MTA), set-top boxes, optical network terminals (ONT), modems xDSL, FTP/TFTP servers, cable modem termination systems (CMTS), etc.) that provide or facilitate providing one or more services on a service provider's infrastructure.
[0005] The network elements may communicate through different communication channels such as, for example, SNMP, TL1, Telnet, SSH, FTP, HTTP, LDAP, CORBA, SQL, Netconf, DOCSIS, etc. They may follow different protocols and may be implemented using different programming languages. Moreover, the protocols and programming languages may differ depending on the vendor (e.g., who manufactures the device), model and version.
[0006] Typically, the service provider provides any services needed to satisfy the requirements of the subscription plans he or she sells. For example, a "GSM free" subscription plan offered by a telecommunications service provider may include services such as voicemail, SMS and a phone line. As another example, a satellite TV subscription may include, for example, the availability of some TV channels and some occasional promotions. Once a service provider sells a new subscription plan, he or she typically needs to activate the underlying services within his or her infrastructure in order for the subscriber to receive the service(s) he or she is paying for. Typically, the service provider can start charging for the subscription only once the service is enabled or activated, hence there is a need to make this happen, and it is desirable to do this quickly, and with an efficient use of resources. Analogously, the service provider may need to interact with his or her infrastructure for subscription deactivations or modifications, or when one or more of the network elements in the infrastructure is to be modified, replaced or removed.
[0007] The process of managing a service provider's infrastructure (e.g., to activate, deactivate, or modify) services, etc. can be complex, difficult, time consuming, and expensive.
[0008] Other prior art references include US 2009/0157457 to Huuhtanen et al. relating to a service provisioning and activation method and system for telecommunications networks, US 2011/0103566 to Sarkar et al. relating to an automated provisioning system, and an article by Pukšec, Dunja Grčić, entitled "Transforming telco service and resource provisioning", 24th Telecommunications Forum TELFOR 2016, 22 November 2016.

FIG. 1 is a schematic representation of an exemplary service provider's infrastructure configured to facilitate service activation and management.

FIG. 2 is a more detailed schematic representation of the service provider's infrastructure of FIG. 1.

FIG. 3 is a flowchart of exemplary processes that may be performed by the infrastructure components in the service provider's infrastructure of FIGS. 1 and 2.

FIG. 4 is a flowchart representing an exemplary workflow for activating a service in the service provider's infrastructure of FIGS. 1 and 2.

FIG. 5 is a flowchart representing another exemplary workflow.

[0092] In a typical implementation, an operator working for the service provider sets up the system / infrastructure in advance of the infrastructure performing the functionalities disclosed above. During setup this operator interacts with several of the components described herein. For example, the operator may go over or perform one or more of the steps set forth here.

[0093] In a typical implementation, the operator defines the business rules at the northbound interface 208, that is, develop a script with a set of rules for each service order posted by the CRM 102. These orders are then part of the service orders database.
[0094] Generally speaking, a business rule explains how to receive a service order from the CRM 102, and decompose this into lower-level service orders and orchestrate these into an array of workflows. Examples of CRM orders include but are not limited to create/change/delete equipment, create/change/delete subscriptions, execute support operations, etc.

[0095] In a typical implementation, the operator develops the BPM workflows and then assigns a workflow to each lower-level service order from the previous step. These workflows can be implemented according to the BPMN standard. Implementing the workflows generally includes, but is not limited to, defining the resource orders (ready-to-activate-orders) execution sequences, defining fallout rules, and defining logs.

[0096] In an exemplary implementation, in order to complete network element 205 configuration, the operator can follow three steps:
[0097] A connector design framework may be used to design, develop, test and deploy interfaces with network elements. In an exemplary implementation, the process proceeds in the following steps:
[0098] When a network connector is instantiated, the connector design framework may first check if the database holds the implementation of the generic methods for the specific vendor-model-version selected for this network connector. If the translation is unavailable it checks if it can find method specifications for a network element with the same vendor and model, but the biggest of the available versions which are smaller than the one selected. Alternatively, it will relax the model and version specifications, but look for method specifications from the same vendor. Finally, if these are not available, it looks for specifications from any vendor.

[0099] In an exemplary implementation, a support employee for the service provider may be in charge of reviewing the failures logged into the fallout management tool. When the support employee checks the fallout management tool, the tool, in a particular implementation, offers any one or more of these options (this information can generally be accessed by the support employee at a computer-based user interface device coupled to the fallout management tool):
[0100] Optionally, workflows may be configured to run with certain variations when they are run for a second time. Generally speaking, they can be configured to force some commands which were executed more cautiously in the first workflow execution. Say, for example, that a workflow (A) attempts to add a user to the user database, but fails and the database returns with an error. Assume that this is a critical operation and thus the workflow fails, and aborts immediately without executing other activities. Assume that the failure happened because the user had already been added to the database. When the workflow is rerun, the WFE 214 first deletes the user and cascading information ---thus making sure that the addition does not failand then adds the user according to the parameters defined in the workflow. To do this, the second workflow (B) which forces the database operation is added to the workflow database and the fallout management tool is configured so that when rerunning workflow (A) it actually runs workflow (B).
[0101] Additionally, in some implementations, the support employee can generate reports to identify recurring problems.
[0102] A number of embodiments of the invention have been described. Nevertheless, it will be understood that various modifications may be made without departing from the scope of the invention as defined by the claims.
[0103] For example, in various embodiments, the subject matter disclosed herein can be implemented in digital electronic circuitry, or in computer-based software, firmware, or hardware, including the structures disclosed in this specification and/or their structural equivalents, and/or in combinations thereof. In some embodiments, the subject matter disclosed herein can be implemented in one or more computer programs, that is, one or more modules of computer program instructions, encoded on computer storage medium for execution by, or to control the operation of, one or more data processing apparatuses (e.g., processors). Alternatively, or additionally, the program instructions can be encoded on an artificially generated propagated signal, for example, a machine-generated electrical, optical, or electromagnetic signal that is generated to encode information for transmission to suitable receiver apparatus for execution by a data processing apparatus. A computer storage medium can be, or can be included within, a computer-readable storage device, a computer-readable storage substrate, a random or serial access memory array or device, or a combination thereof. While a computer storage medium should not be considered to include a propagated signal, a computer storage medium may be a source or destination of computer program instructions encoded in an artificially generated propagated signal. The computer storage medium can also be, or be included in, one or more separate physical components or media, for example, multiple CDs, computer disks, and/or other storage devices.
[0104] The operations described in this specification can be implemented as operations performed by a data processing apparatus (e.g., a processor) on data stored on one or more computer-readable storage devices or received from other sources. The term "processor" encompasses all kinds of apparatus, devices, and machines for processing data, including by way of example a programmable processor, a computer, a system on a chip, or multiple ones, or combinations, of the foregoing The apparatus can include special purpose logic circuitry, e.g., an FPGA (field programmable gate array) or an ASIC (application specific integrated circuit). The apparatus can also include, in addition to hardware, code that creates an execution environment for the computer program in question, for example, code that constitutes processor firmware, a protocol stack, a database management system, an operating system, a cross-platform runtime environment, a virtual machine, or a combination of one or more of them. The apparatus and execution environment can realize various different computing model infrastructures, such as web services, distributed computing and grid computing infrastructures.

identifying an identified workflow from a plurality of workflows corresponding to the service order (334);

sending a ready-to-activate service order and data to a provisioning engine (218);

assembling a command at the provisioning engine, in a format that is specific to a network element (205), to perform the ready-to-activate service order;

parsing the response at the provisioning engine (218);

returning the parsed response to the workflow engine (214); and

wherein each workflow of the plurality of workflows comprises a start event and a plurality of structured activities and tasks executed sequentially and in parallel and/or conditionally producing a specific service.

the service-provider's system receiving one description for one network element type; and

the service-provider's system receiving syntax for a ready-to-activate service order related to the one network element type.

8. The method of any preceding claim, wherein each workflow of the plurality of workflows comprises a business process management workflow. 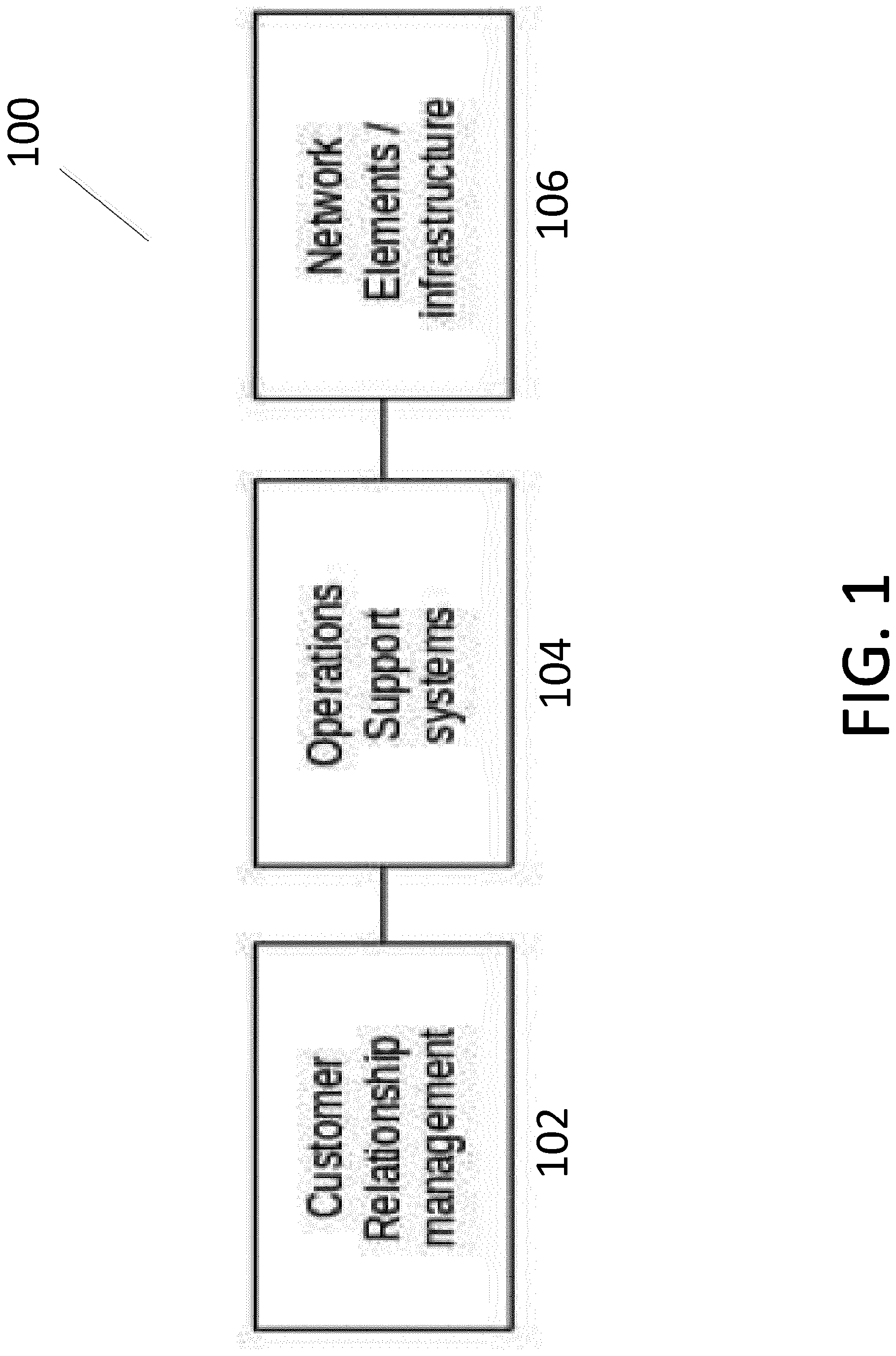 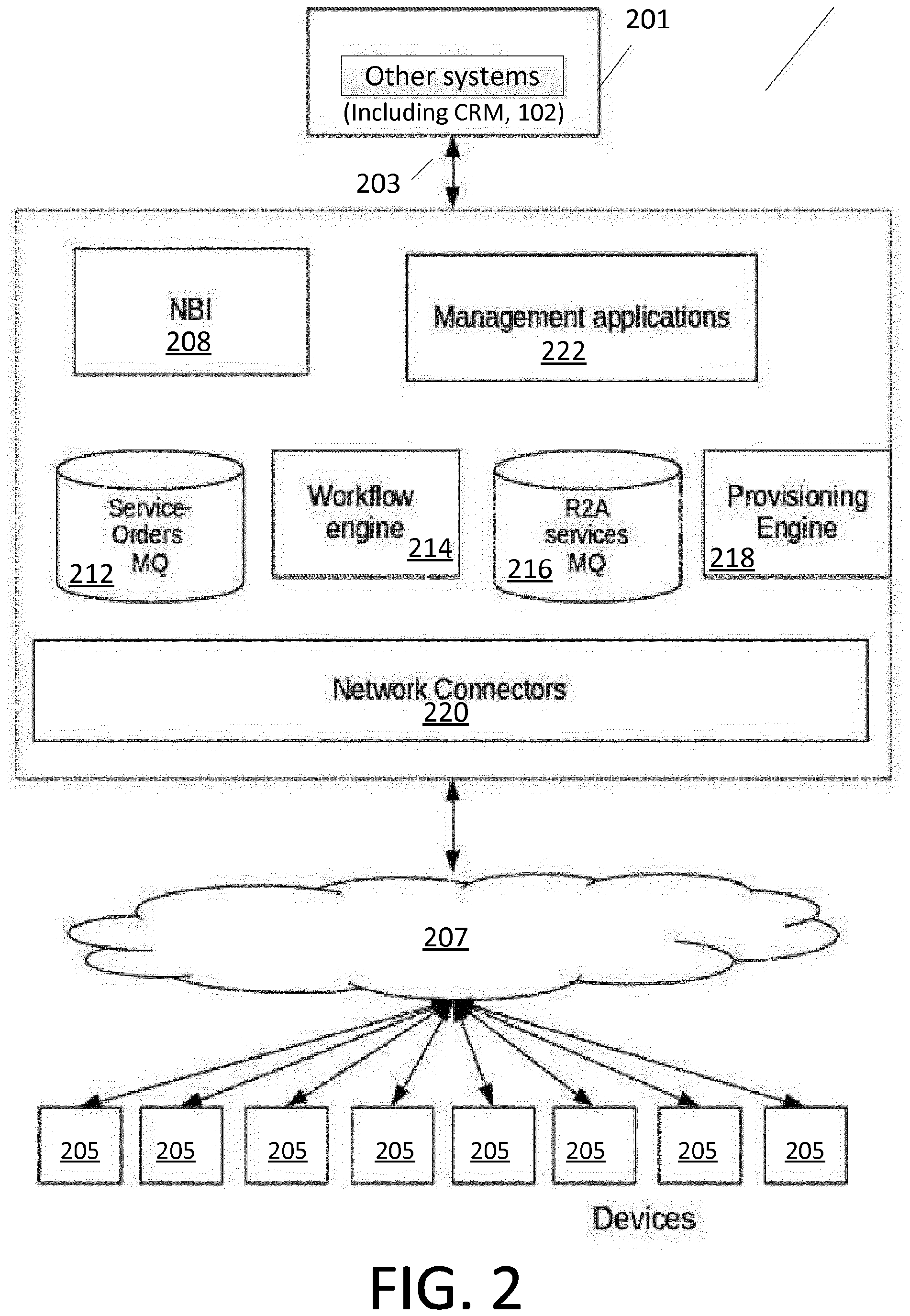 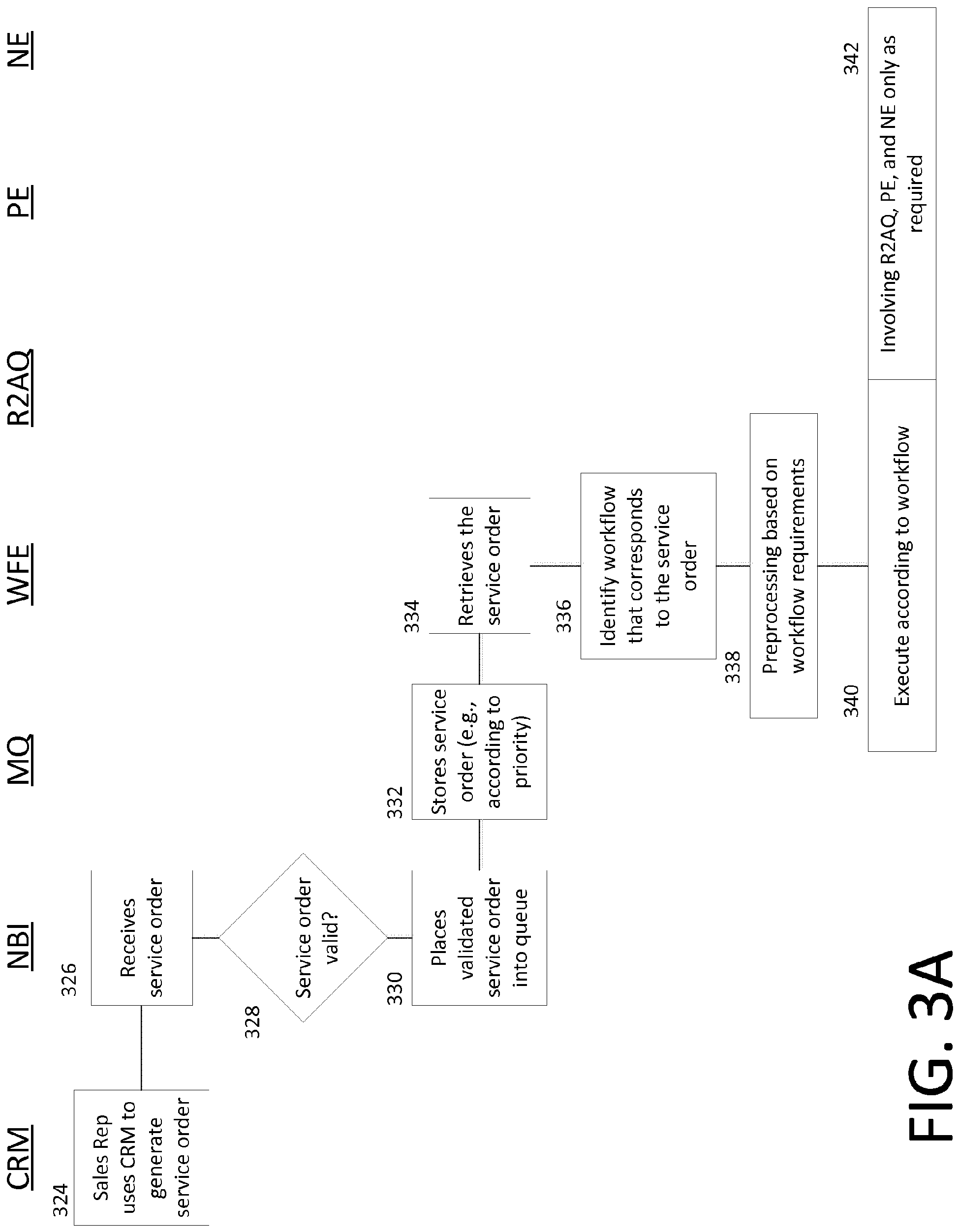 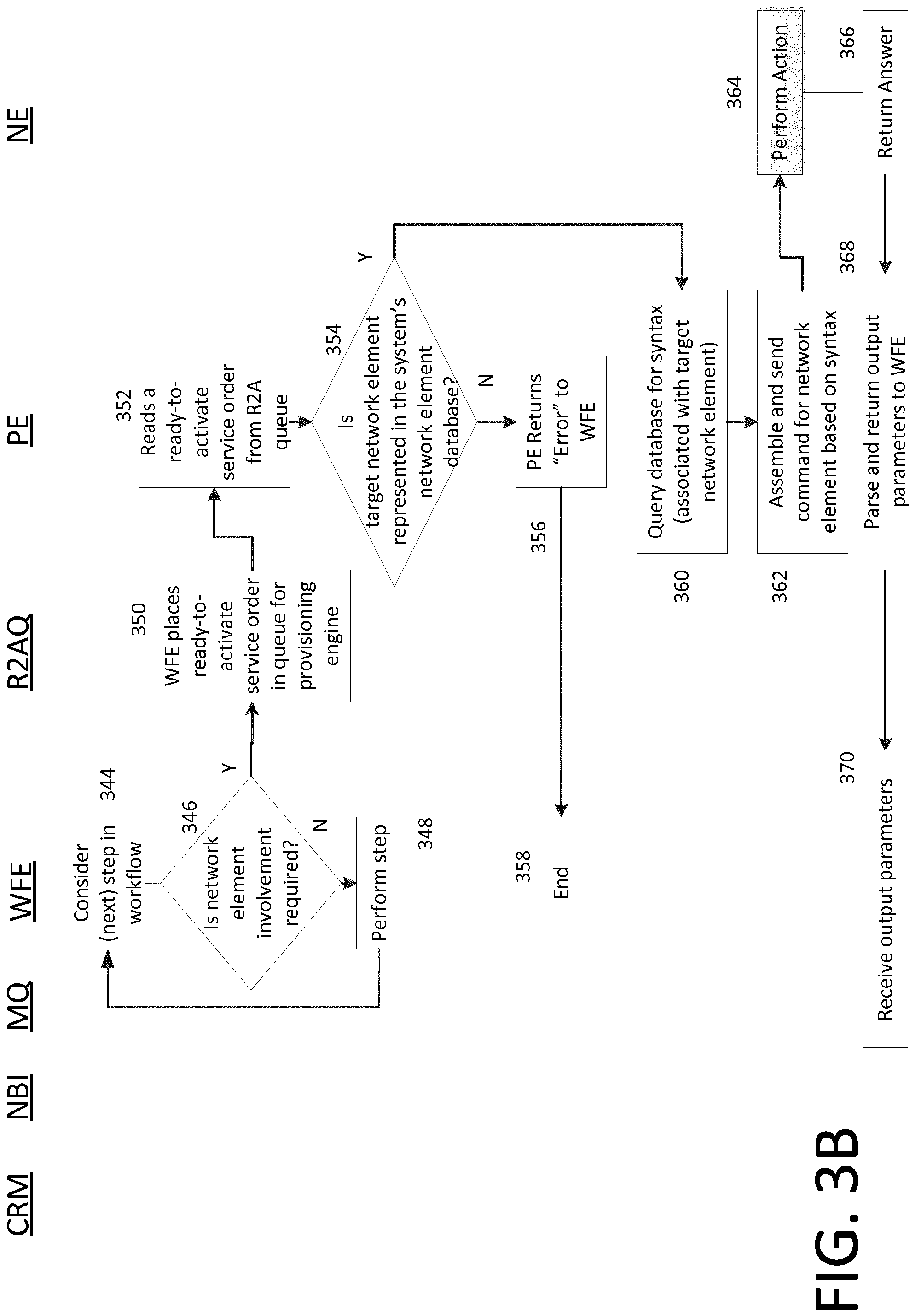 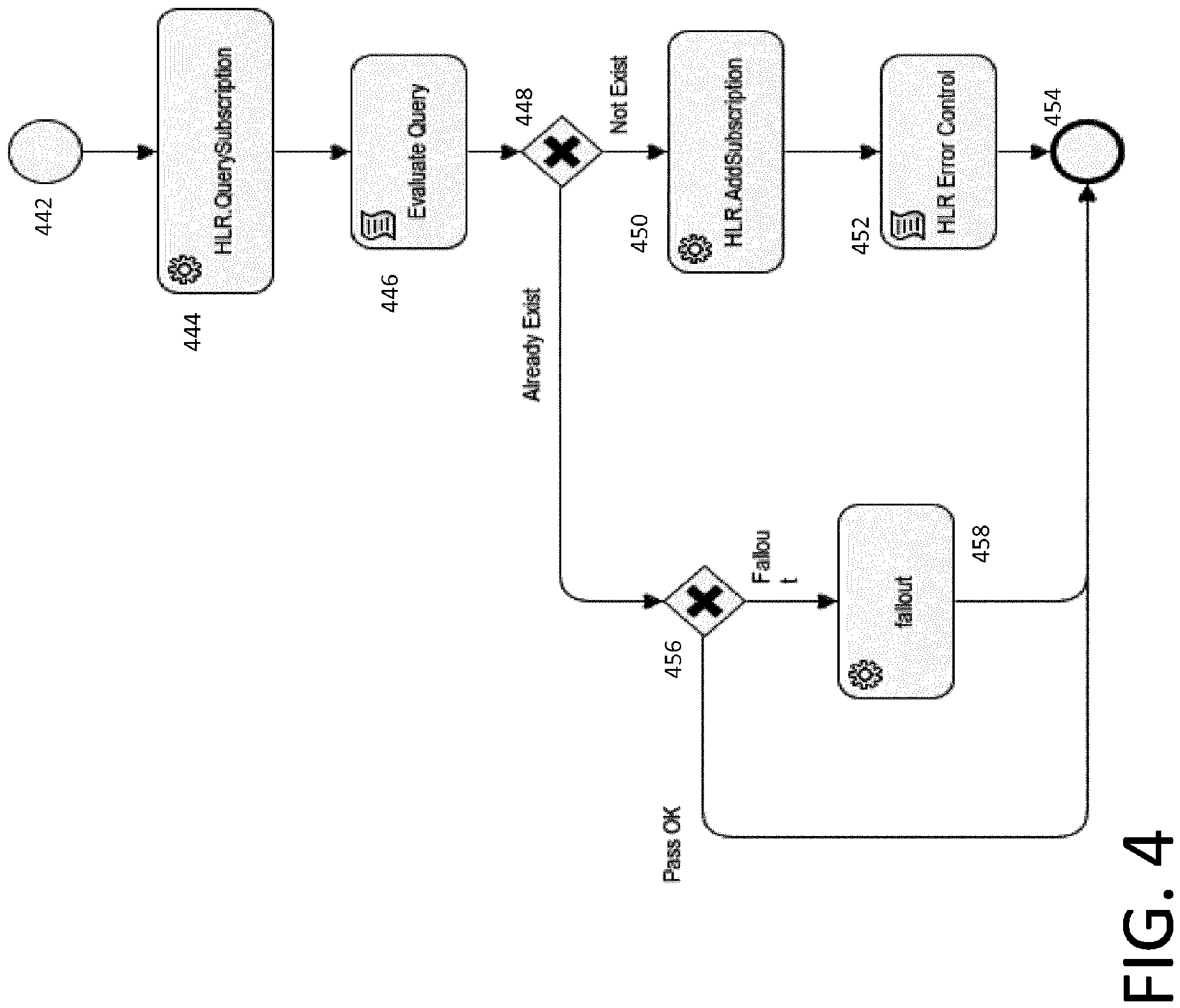