[0001] The present invention relates to 4,6-di-(O-thiophosphate)-inositol-1,2,3,5-tetra-O-sulfate and its use as an enteric activator of Clostridium difficile toxin in prevention and therapy of the toxic symptoms associated with C. difficile infection.

[0002] Infections with Clostridium difficile can lead to severe, even life-threatening diarrhoea. The symptoms are caused by two toxins synthesized by C. difficile, TcdA and TcdB. The toxins can enter the cells lining the colon, where they are activated by cytosolic inositol hexakisphosphate (IP6) and exert their toxic function. One suggested therapeutic intervention is to activate the toxins in the extracellular space of the colon lumen. The activated toxins are no longer able to enter the colon cells, and within the colon lumen they cannot exert their toxic function. Thus, activation of the toxins within the colon lumen renders the toxins harmless for the affected patient.
[0003] IP6 cannot be used for therapeutic intervention, because it precipitates due to the high calcium concentration in the colon lumen.
[0004] WO2013045107A1 shows PEG-modified inositol phosphate compounds and mixed inositol phosphate-sulfate compounds and their use in activation of C. difficile toxin activation. The activity of the compounds shown therein is promising, however improvements upon the results related therein would be of advantage. Thus, the problem underlying the present invention is to provide activators of C. difficile toxin that exhibit stronger activity at high calcium concentration.
[0005] CHEMBIOCHEM - A EUROPEAN JOURNAL OF CHEMICAL BIOLOGY, vol. 16, no. 7, 12 March 2015, pages 1030-1032 discloses "New Paradigms for the Chiral Synthesis of Inositol Phosphates".
[0006] DISS. ETH NO. 22532, 2015, pages 1-84 discloses "Chemical Synthesis of Biomolecules Analogs: Inositol Phosphate/Sulfate Hybrids And Fluorinated Carbohydrates".
[0007] MedChemComm, vol. 3, no. 7, 2012, page 735 discloses "The use of phosphate bioisosteres in medicinal chemistry and chemical biology".
[0008] BIOCHEMICAL JOURNAL, vol. 246, no. 3, 1987, pages 771-774 discloses "myo-Inositol phosphorothioates, phosphatase-resistant analogues of myo -inositol phosphates. Synthesis of dl-myo -inositol 1,4-bisphosphate and dl-myo -inositol 1,4-bisphosphorothioate".
[0009] US9200015 B2 discloses derivative compounds of inositol hexakisphosphate effective to treat a Clostridium difficile infection and to neutralize the bacterial toxins produced by the same.
[0010] EP0269105 A2 discloses derivatives of cyclohexane for pharmaceutical applications.
[0011] This problem is solved by the subject matter of the independent claims.

[0012] During an investigation of the compound class first shown in WO2013045107A1, it was surprisingly found that a small subset of mixed inositol tetrakissulfate bisthiophosphate compounds is far superior in effect to previously investigated mixed sulfate-phosphate compounds (see Fig. 1).
[0013] According to a first aspect of the invention, a compound characterized by the general formula (I)

is provided, wherein two out of six X are OPSO22- and the remaining X are OSO3-.
[0014] The straight lines in formula I are meant to indicate that the stereochemistry of the individual ring carbon atoms is undefined. The formula is meant to encompass any diastereomer.
[0015] In certain embodiments, the compound is characterized by the general formula (IIa) or (IIb)

Short description of the figures

[0028] The synthesis followed the sequence depicted in the scheme below:

[0032] The sulfation reaction of the thiophosphate has to be performed carefully because the thiophosphate is eventually converted to the phosphate under the reaction conditions. We thus monitored the sulfation carefully and saw that the reaction was complete after ca. 30 min. and that no decomposition could be observed in this time. Thus, sulphurtrioxide dimethylformamide (SO3-DMF) complex (12 eq.) was added to a suspension of inositol phosphate in DMF and the reaction was stirred 35 min. The reaction was quenched by adding 1N NaOH, until ca. pH 8 followed by ca. 3 ml methanol (MeOH) to precipitate salts. The solid was purified by Sephadex LH-20 column, eluting with water.
1H-NMR (500 MHz; D2O): δ 5.06 (s, 1H), 5.04-4.98 (m, 4H), 4.79-4.76 (m, 1H).
31P-NMR (203 MHz; D2O): δ 44.5
1H-NMR and 31P-NMR results are shown in Fig. 2.

[0033] IP6, activator compound (IIa) and IP2S4 were compared with regard to the extent of cleavage of TcdB (Fig. 1). The compound to be tested was added at 1 mM to 150 ng toxin B in presence or absence of 10 mM Ca2+ in 100 mM Tris pH7.4 and incubated for 3 h at 37°C. Cleaved protein fragments were separated by SDS-PAGE and visualized by silver staining. The extent of cleavage was quantified from protein band intensities using the ImageJ software package. Signals were normalized to cleavage of positive and negative controls. The results show that the di-thiophosphate-tetra-sulfate inositols are surprisingly superior even in comparison to di-phosphate-tetra-sulfate inositols, which in turn are significantly superior to the inositolhexasulfate and inositol hexaphosphate previously published (Fig. 3 and comparative example 3).

[0035] Analogue solubility measurements by ICP-MS. 100 mM solutions of inositol hexakisphosphate (IP6) analogues with or without 10 mM CaCl2 were prepared in 10 mM tris pH 7.4 and incubated with agitation for 2 h at 37 °C. The solutions were immediately filtered through 0.2 mm nylon filters equilibrated to 37 °C. The phosphorous content in each filtrate was determined by inductively coupled plasma-mass spectrometry (ICP-MS). The values obtained were divided by the number of phosphates in each IP6 analogue to determine the concentration of the compound in the solutions.
[0036] Free calcium ion quantification. A fresh 1 mM solution of murexide (Merck, Germany) was prepared in 10 mM tris pH 7.4. For each IP6 analogue, samples containing 0.5 mM analogue, murexide and CaCl2 in 50 mL 10 mM tris were prepared in triplicate. After 5 min incubation at room temperature, the samples were centrifuged at 20'000 g for 2 min and the upper 40 mL of the supernatant transferred to a 384-well plate. Samples without IP6 analogue containing CaCl2 ranging from 1 mM to 20 mM, and 20 mM were also prepared and used for calibrating each experiment. The absorbance was measured at 474 nm and 544 nm and the data analyzed as reported by Ohnishi.[Anal. Biochem. 85, 165 (1978)] The experiment was repeated in triplicate.
[0037] Cleavage assays with holotoxin. 1 mM IP6 analogues were equilibrated with 10 mM CaCl2 in 100 mM tris pH 7.4 for 15 min at 37 °C before addition of 150 ng TcdB (TgcBiomics, Germany) in a total volume of 20 mL. A negative control (no IP6, 10 mM CaCl2) and a positive control (1 mM IP6) were also included on every gel. The reaction mixtures were incubated for 3 h at 37 °C and then placed on ice. Laemmli sample buffer (5X) was added to stop the reactions and 10 mM EDTA was added to the samples containing CaCl2 before heating at 95 °C for 3 minutes. The cleavage products were visualized by SDS-PAGE (using 15-well 8 % acrylamide Precise™ Tris-Glycine gels, ThermoScientific, USA) followed by silver staining according to a modified Vorum protocol [Proteomics 1, 1359 (2001)] with the thiosulphate sensitization step extended to 10 min. The linearity of the staining protocol was verified with serial dilutions of TcdB starting at 160 ng/lane down to 20 ng/lane. The band intensities were quantified as described for the cleavage assays with recombinant toxin. The experiment was done in triplicate.

1. A compound characterized by the general formula (I)

wherein two out of six X are OPSO22- and the remaining X are OSO3-.
2. The compound according to claim 1, characterized by the formula (IIa) or (IIb) 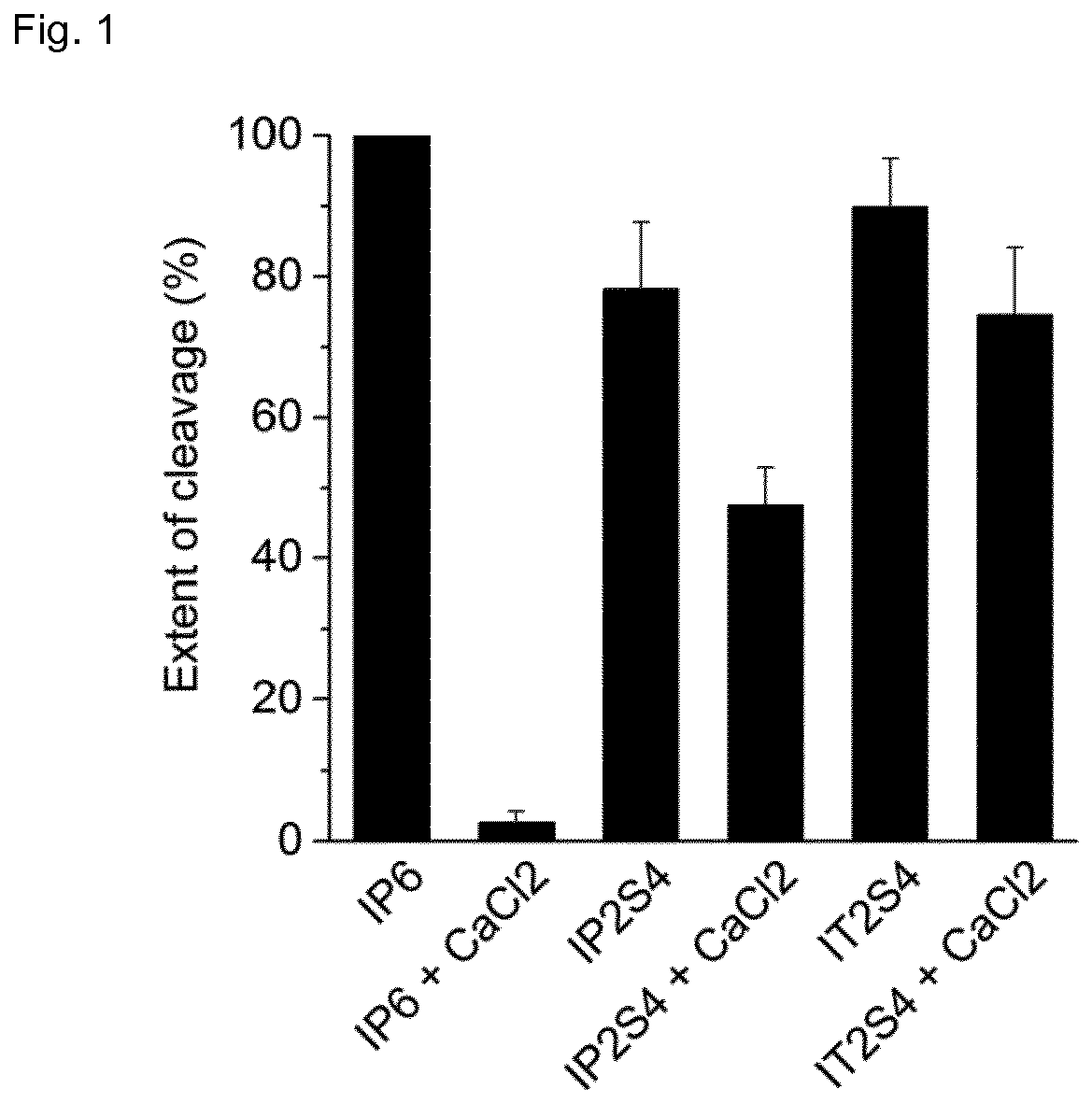 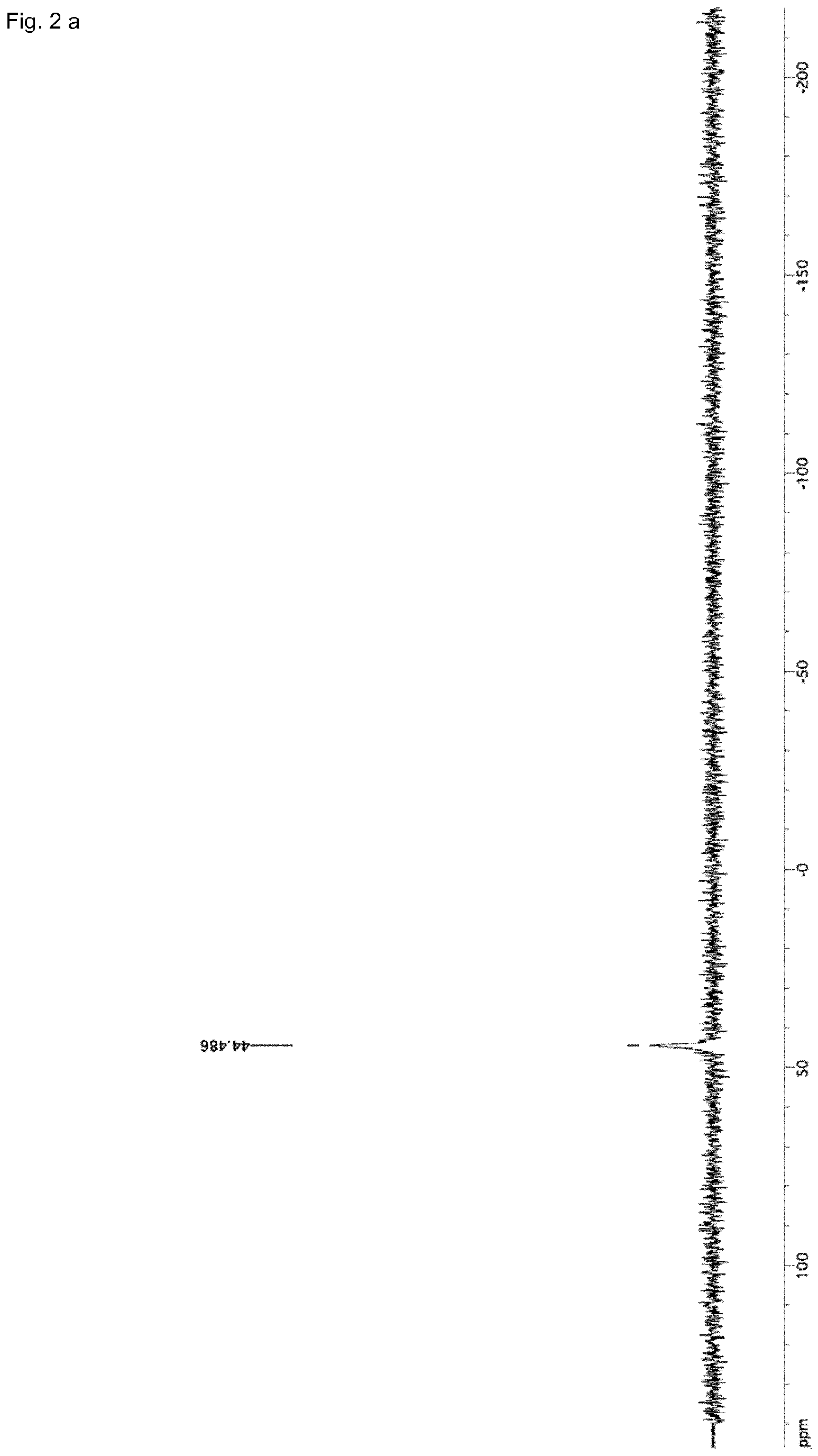