[0002] Gas turbine engines typically include a compressor section, a combustor section and a turbine section. During operation, air is pressurized in the compressor section and is mixed with fuel and burned in the combustor section to generate hot combustion gases. The hot combustion gases arc communicated through the turbine section, which extracts energy from the hot combustion gases to power the compressor section and other gas turbine engine loads.
[0003] Both the compressor and turbine sections may include alternating series of rotating blades and stationary vanes that extend into the core flow path of the gas turbine engine. For example, in the turbine section, turbine blades rotate and extract energy from the hot combustion gases that are communicated along the core flow path of the gas turbine engine. The turbine vanes, which generally do not rotate, guide the airflow and prepare it for the next set of blades.
[0004] Gas path temperatures are well above the melting point of hot section components, necessitating cooling component for adequate durability. Many blades and vanes, blade outer air seals, turbine platforms, and other components include internal cooling passages. Multi-pass serpentine cooling passage configurations, which are a common cooling scheme for gas turbine blades, are susceptible to problems stemming from the cooling air heating up as the cooling flow navigates the internal passages. As the cooling air flows through the airfoil, this air cools the metal surfaces of the blade; however, the cooling airfoil becomes increasingly hot and less effective as the air travels down the passageway.
[0005] One approach to provide cooler air further down the passageway of a serpentine cooling passage is to provide a resupply hole parallel to a chord-wise direction of the airfoil and tangent to an outer radius of a turn interconnecting parallel passageways of the serpentine cooling passage.
[0006] US 2012/230838 A1 discloses an internally cooled turbine blade and gas turbine, US 8 864 467 B1 discloses a turbine blade with serpentine flow cooling, and US 2014/086756 A1 discloses an internally cooled gas turbine engine airfoil.

[0009] The disclosure can be further understood by reference to the following detailed description when considered in connection with the accompanying drawings wherein:

Figure 2A is a perspective view of the airfoil having the disclosed cooling passage.

Figure 2B is a plan view of the airfoil illustrating directional references.

Figure 3 is a perspective view of various cooling passages within an example airfoil.

Figure 3A is a cross-section taken along line 3A-3A in Figure 3.

Figure 4 is a cross-section of an alternative embodiment to that shown in Figure 3A.

Figure 4A is an enlarged view of a portion of Figure 4.

Figure 5 is a cross-section taken along line 5-5 in Figure 2A.

Figure 6 is an enlarged cross-sectional view of a portion of an airfoil serpentine passage illustrated in Figures 3 and 3A.

a combustor (56) fluidly connected to the compressor section (24); and 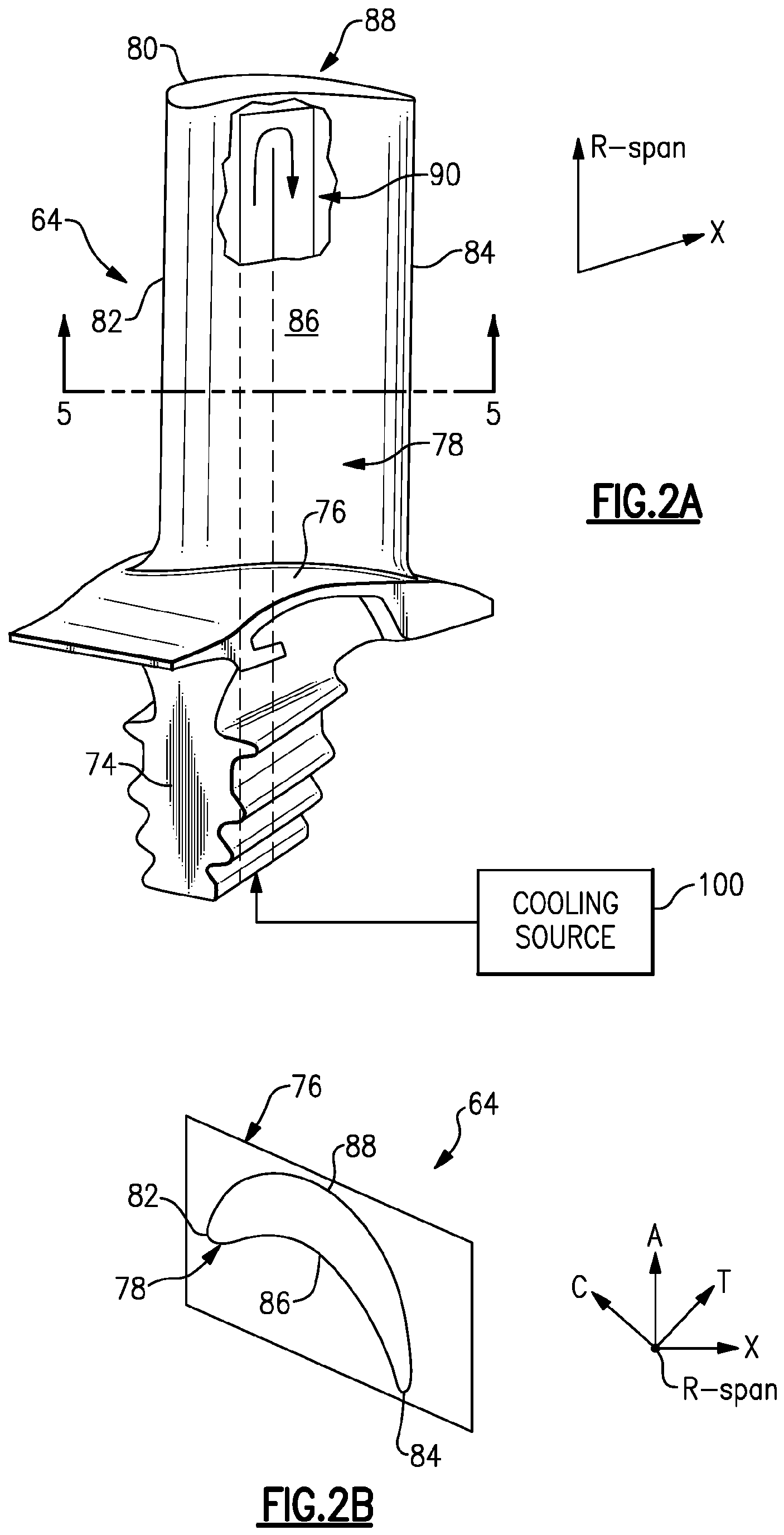 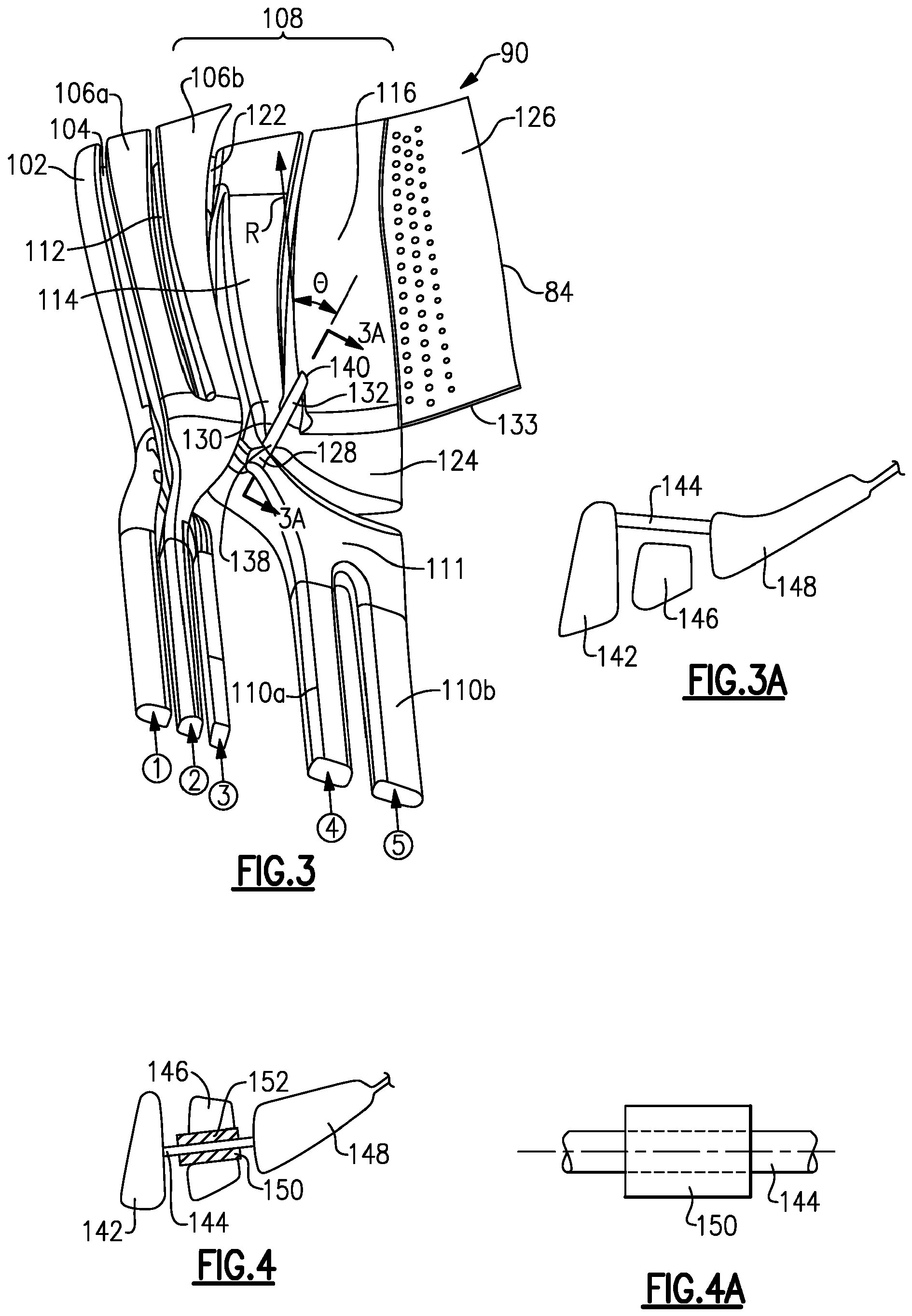