[0118] The test is carried out on a test piece with a flat surface having a size of 550 mm x 700 mm and painted with an acrylic paint with the trade name PPG, marketed by MaxMayer AcquaMax. The parameter measured during the test is the reduction of the thickness of the layer of paint. The value of this parameter was obtained from the difference between the thickness of the layer before the test and the remaining thickness measured at different times during and at the end of the test. A portable feeler gauge produced by Helmut-Fisher S.r.l. was use for this measurement. The total test time was 3 minutes. Sanding was carried out continuously for the whole of the test. The thickness was measured 6 times at regular intervals of 30 seconds.

[0119] The test is conducted on a painted test piece having the same characteristics as the one used for the dry sanding test. During the test the average roughness parameter Rz was measured, evaluated on the measurement length, according to the JISB0601-2001 & ISO method. Measurement is carried out with a Mitutoyo SJ-210 contact profilometer. The total test time was 3 minutes. The roughness was measured 6 times at regular intervals of 30 seconds.

A) Preparation of the aqueous suspension

[0120] Initially an aqueous mixture (M1) of rheological additives and suspending agents is prepared, placing the following components in a turbo mixer (parts by weight):
[0121] Mixing is conducted at the following conditions: temperature of 20-25 °C, mixing time of 45 minutes and mixing speed of 200-400 rpm. At the end of mixing, the following components are placed in said mixer containing all the aqueous mixture M1 prepared previously (parts by weight):
[0122] The aforesaid mixing takes place by mixing at the following operating conditions:
[0123] The aqueous suspension 20 obtained has a viscosity of 2200 mPa·s, measured at 25° C according to the Brookfield method.

B) Preparation of the flexible abrasive film

[0124] In a continuous production plant 100 a flexible abrasive single layer film is prepared according to the process of the present invention carrying out the stages indicated below.
[0125] Stage (a): the plant 100 is fed with a film FB with a thickness of 150 µm.
[0126] The film is guided along a process direction Dp, as illustrated in Fig. 3.
[0127] In this stage (a) and in the subsequent stage (b), the process temperature corresponds to the room temperature.
[0128] Stage (b): the aqueous suspension 20 prepared previously is poured onto the upper surface of the film FB coming from the previous stage and spread with an apparatus B of doctor blade type, associated with a roller C, so as to form a layer with a thickness of 60 µm.
[0129] Stage (c): the product coming from the preceding stage is subjected to heating which is implemented in two consecutive steps, precisely:
[0130] The total heating time is 4 minutes.
[0131] After being removed from the hot air furnace, the film is cooled to room temperature.
[0132] At the end of this stage a flexible abrasive single layer film 40 having the following physical and mechanical properties is obtained:

[0133] The flexible abrasive film 40 obtained with the process of example 1 is subjected, according to the following known process, to a finishing operation in which the following is carried out:
[0134] As illustrated in Fig. 3a, application of the coupling layer 60 is carried out by coupling the article 40 and the coupling layer 60 in a pair of rollers D.
[0135] The face of the coupling layer 60 that bonds to the lower surface 12 of the polymer film FB, has an adhesive layer formed of an adhesive material sensitive to the pressure exerted by the rollers D, unheated, to allow said coupling.
[0136] Finally, the film is subjected to the calendering stage in which the rollers L exert a pressure on the film to compact the polymeric material. The rollers are heated to a temperature of 120 °C.
[0137] Finally, the finished film thus obtained is given the shape of a disc with a diameter of 150 mm and is subjected to punching to form on the working side according to the prior art a central through hole and 14 suction holes with a diameter of 10 mm.
[0138] This article is suitable to be used for dry sanding a painted surface, typically to eliminate the "orange peel" effect of said painted surface.

[0139] A film of the type Kovax Tolex K 1500 was subjected to the same dry sanding test for removal of paint to which the film of example 2 was subjected.
[0140] The graph of Fig. 4 indicates the removal data of the 6 measurements relating to each of the two dry sanding tests carried out, in which the article of example 2 was used in the first and the article of the comparison example 1c was used in the other.
[0141] As can be noted by observing the graphs, 3 minutes after starting the test the paint removal capacity of the abrasive article according to the invention is on the whole greater with a smaller variation in efficiency of the performance of the article over the whole of the test period with respect to that of the article of the comparison example 1c. In particular, the finished article of example 2 gives better removal and machining speed results with respect to the article of the prior art in the first 90 seconds, while subsequently they have similar efficacy.

[0142] Example 1 is repeated with the following differences in the preparation of the aqueous mixture (M2), which also contains functionalizing additives (process of Fig. 3b). The following components (parts by weight) are placed in a turbo mixture with impeller:
[0143] Said mixing is conducted at a temperature of 50°-60° C, for 40 minutes at a speed of 200-300 rpm.
[0144] The aqueous suspension 21 obtained has a viscosity of 4000 mPa·s, measured at 25° C according to the Brookfield method.

[0145] The finishing operation as described in the previous example 2 is repeated on the flexible abrasive single layer film and then a coupling layer 60 is applied to the lower surface 12 of the film FB (Figs. If and 3b).
[0146] The finished film thus obtained (Fig. If) is subjected to the same operation to give it the shape of a disc, but without the operations to create the through holes.
[0147] This article is suitable to be used, during the pre-polishing step of a painted surface, for the micro finish of this surface.

[0148] A film of the type Kovax Buflex K 3000 was subjected to the same test to reduce the roughness of a painted surface to which the film of example 4 was subjected.
[0149] The graph of Fig. 5 indicates the roughness data of the 6 measurements relating to each of the two micro finish tests to reduce the surface roughness carried out, in which the article of example 4 was used in the first and in the article of the comparison example 2c was used in the other.
[0150] As can be noted by observing the graphs, 3 minutes after starting the test the efficacy in reducing the roughness profile of the painted surface of the test piece by the abrasive article not part of the claimed invention is initially better and, as from the second minute, exactly the same in absolute terms with respect to the efficacy of the article of the comparison example 2c.

1. A process for producing a flexible abrasive article (40), in sheet or film form, comprising the following stages:

a) laying a film FB of elastomeric or thermoplastic polymers PFB so as to obtain an upper surface (11) and a lower surface (12);

(i) elastomeric or thermoplastic polymers PSA, and

characterized in that in this process the film FB is formed with polymers PFB that have the same chemical composition as the polymers PSA present in the aqueous suspension SA.
2. Process according to claim 1, wherein the polymers are selected from: polymers of the families of polyester thermoplastic polyurethanes (TPU) and polyether TPUs, silicone-based elastomeric polymers, synthetic rubbers of NBR or SBR type.
3. Process according to claim 1 or 2, wherein said aqueous suspension SA comprises the following components (parts by weight):

- from 4 to 15 parts of both rheological additives and suspending agents. 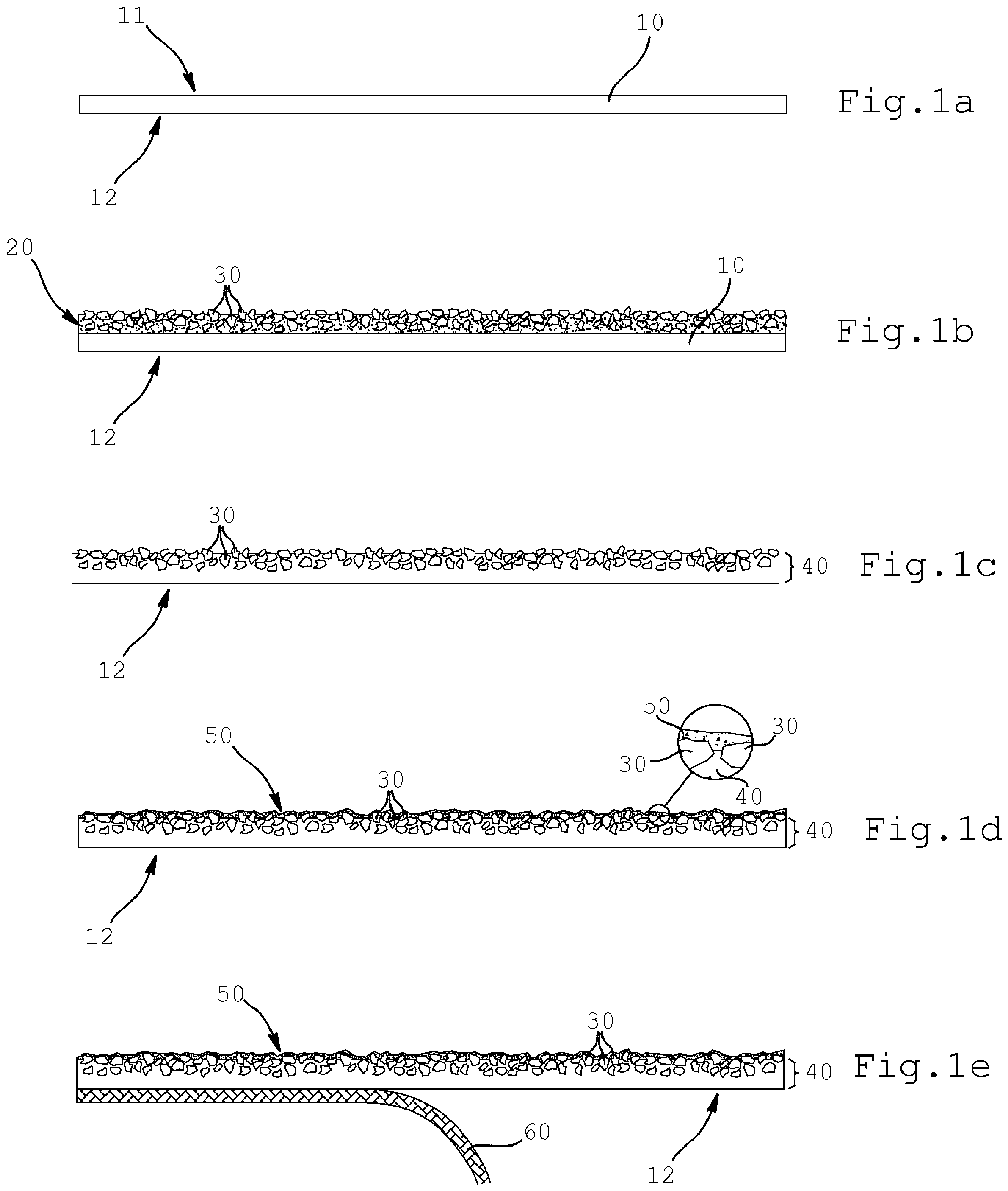 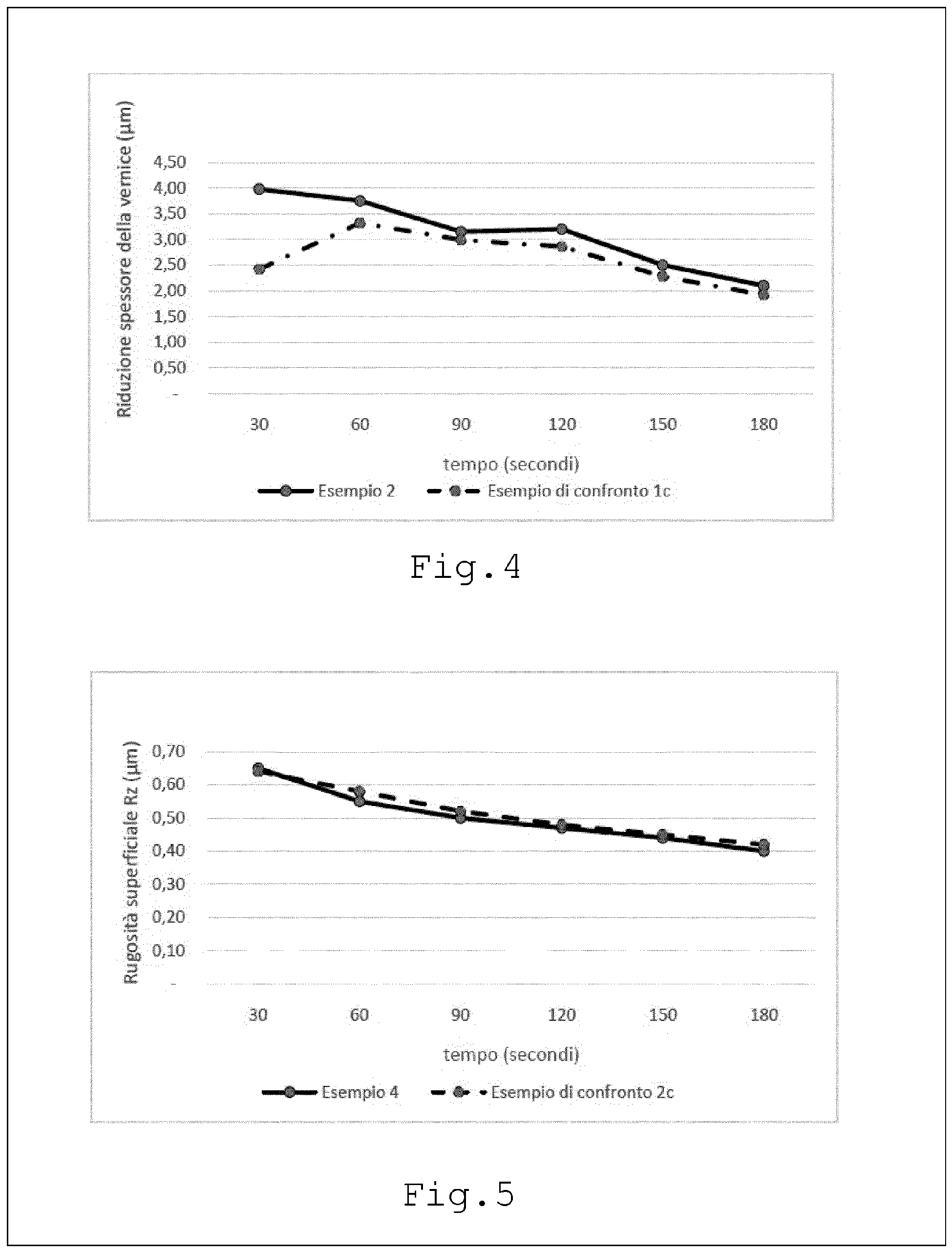