[0001] The present application generally relates to data compression and, in particular, to methods and devices for sign bit hiding when encoding and decoding residual video data.

[0002] Data compression occurs in a number of contexts. It is very commonly used in communications and computer networking to store, transmit, and reproduce information efficiently. It finds particular application in the encoding of images, audio and video. Video presents a significant challenge to data compression because of the large amount of data required for each video frame and the speed with which encoding and decoding often needs to occur. The current state-of-the-art for video encoding is the ITU-T H.264/AVC video coding standard. It defines a number of different profiles for different applications, including the Main profile, Baseline profile and others. A next-generation video encoding standard is currently under development through a joint initiative of MPEG-ITU termed High Efficiency Video Coding (HEVC). The initiative may eventually result in a video-coding standard commonly referred to as MPEG-H.
[0003] There are a number of standards for encoding/decoding images and videos, including H.264, that use block-based coding processes. In these processes, the image or frame is divided into blocks, typically 4x4 or 8x8, and the blocks are spectrally transformed into coefficients, quantized, and entropy encoded. In many cases, the data being transformed is not the actual pixel data, but is residual data following a prediction operation. Predictions can be intra-frame, i.e. block-to-block within the frame/image, or inter-frame, i.e. between frames (also called motion prediction). It is expected that MPEG-H will also have these features.
[0004] When spectrally transforming residual data, many of these standards prescribe the use of a discrete cosine transform (DCT) or some variant thereon. The resulting DCT coefficients are then quantized using a quantizer to produce quantized transform domain coefficients, or indices.
[0005] The block or matrix of quantized transform domain coefficients (sometimes referred to as a "transform unit") is then entropy encoded using a particular context model. In H.264/AVC and in the current development work for MPEG-H, the quantized transform coefficients are encoded by (a) encoding a last significant coefficient position indicating the location of the last non-zero coefficient in the transform unit, (b) encoding a significance map indicating the positions in the transform unit (other than the last significant coefficient position) that contain non-zero coefficients, (c) encoding the magnitudes of the non-zero coefficients, and (d) encoding the signs of the non-zero coefficients. This encoding of the quantized transform coefficients often occupies 30-80% of the encoded data in the bitstream.
[0006] Transform units are typically NxN. Common sizes include 4x4, 8x8, 16x16, and 32x32, although other sizes are possible, including non-square sizes in some embodiments, such as 8x32 or 32x8. The sign of each non-zero coefficient in a block is encoded using one sign bit for each non-zero coefficient.
[0007] JEAN-MARC THIESSE ET AL, "Data hiding of motion information in chroma and luma samples for video compression", 2010 IEEE INTERNATIONAL WORKSHOP ON MULTIMEDIA SIGNAL PROCESSING (MMSP '10), SAINT MALO, FRANCE, 4-6 OCT. 2010, IEEE, IEEE, PISCATAWAY, USA, (20101004), ISBN 978-1-4244-8110-1, pages 217 - 221, proposes to reduce the signaling information resulting from this vector competition, by using data hiding techniques. As data hiding and video compression traditionally have contradictory goals, a study of data hiding is first performed. Then, an efficient way of using data hiding for video compression is proposed. The main idea is to hide the indices into appropriately selected chroma and luma transform coefficients. To minimize the prediction errors, the modification is performed via a rate-distortion optimization. Objective improvements (up to 2.3% bitrate saving) and subjective assessment of chroma loss are reported and analyzed for several sequences.

[0008] Reference will now be made, by way of example, to the accompanying drawings which show example embodiments of the present application, and in which:

Figure 3 shows, an example of a multi-level scan order for a 16x16 transform unit;

Figure 5 shows one example of a transform unit in which four groups of coefficient groups are formed for sign bit hiding;

Figure 6 illustrates another example of a grouping of coefficient groups for sign bit hiding;

Figure 7 shows yet another example of a grouping of coefficient groups for sign bit hiding;

Figure 10 shows a simplified block diagram of an example embodiment of an encoder; and

Figure 11 shows a simplified block diagram of an example embodiment of a decoder.

[0009] Similar reference numerals may have been used in different figures to denote similar components.

[0064] If the coefficient u is adjusted down by 1 to u-1, then the resulting distortion may be estimated as:

based on whether the parity of the resulting sum for that coefficient group is even or odd, assigning a respective sign bit value representing the respective sign.

2. The method claimed in claim 1, wherein each respective sign bit value is assigned to a respective syntax element that is not a sign bit of any of the coefficients in that coefficient group.

3. The method claimed in claim 1, wherein each respective sign bit value is a sign of a respective coefficient in another coefficient group in the transform unit.

9. The method claimed in claim 1, wherein the determining comprises determining whether a respective adjacent coefficient group contains at least one non-zero coefficient.

12. The method claimed in claim 1, wherein the transform unit is non-square.

14. A decoder for decoding a bitstream of encoded video, the decoder (1000) comprising:

a decoding application (1006) stored in the memory (1004) and containing instructions that, when executed, cause the processor (1002) to perform the method of any of claims 1 to 13.

15. A non-transitory processor-readable medium storing processor-executable instructions which, when executed, configures one or more processors to decode a bitstream of encoded video by:
performing the method of any of claims 1 to 13. 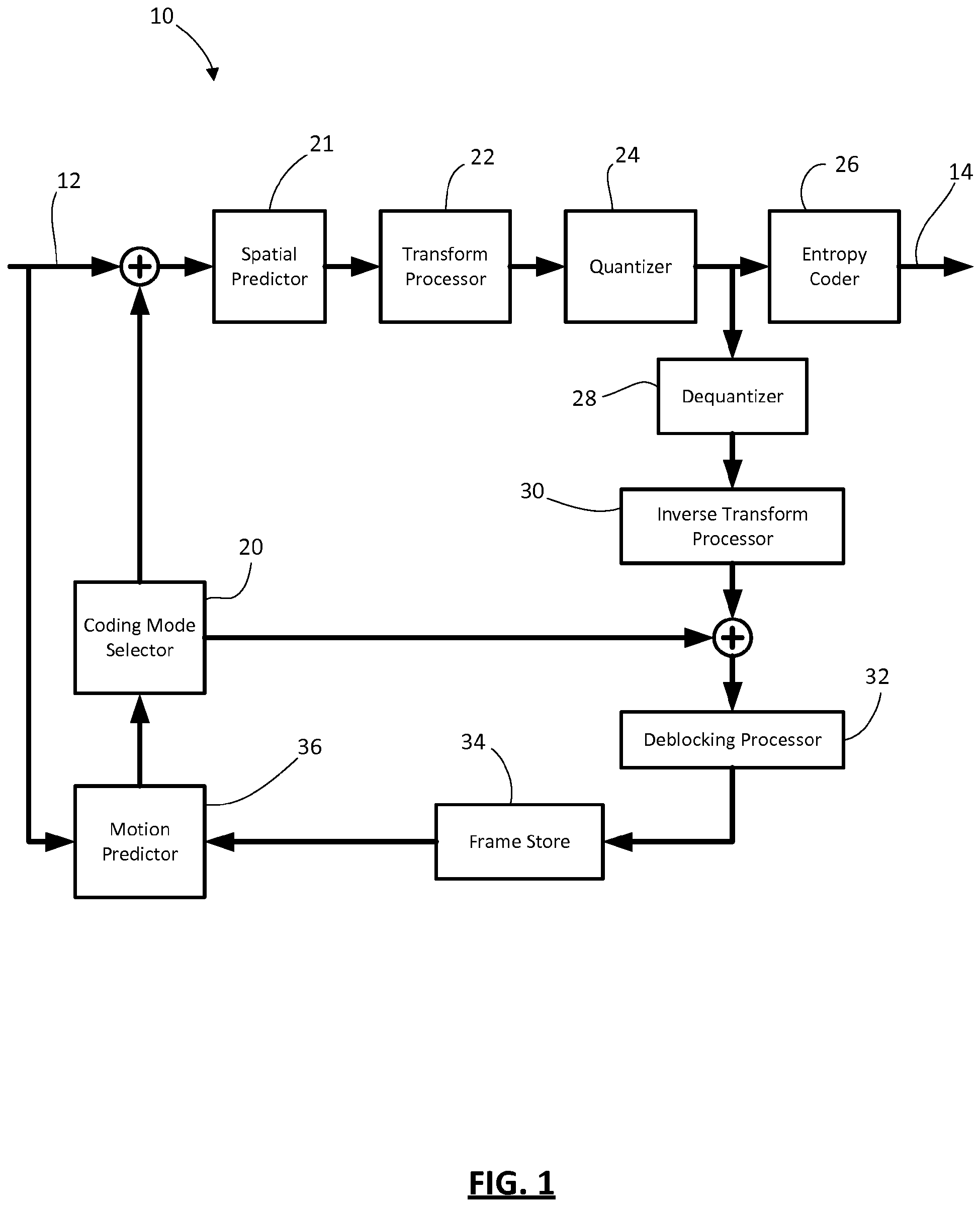 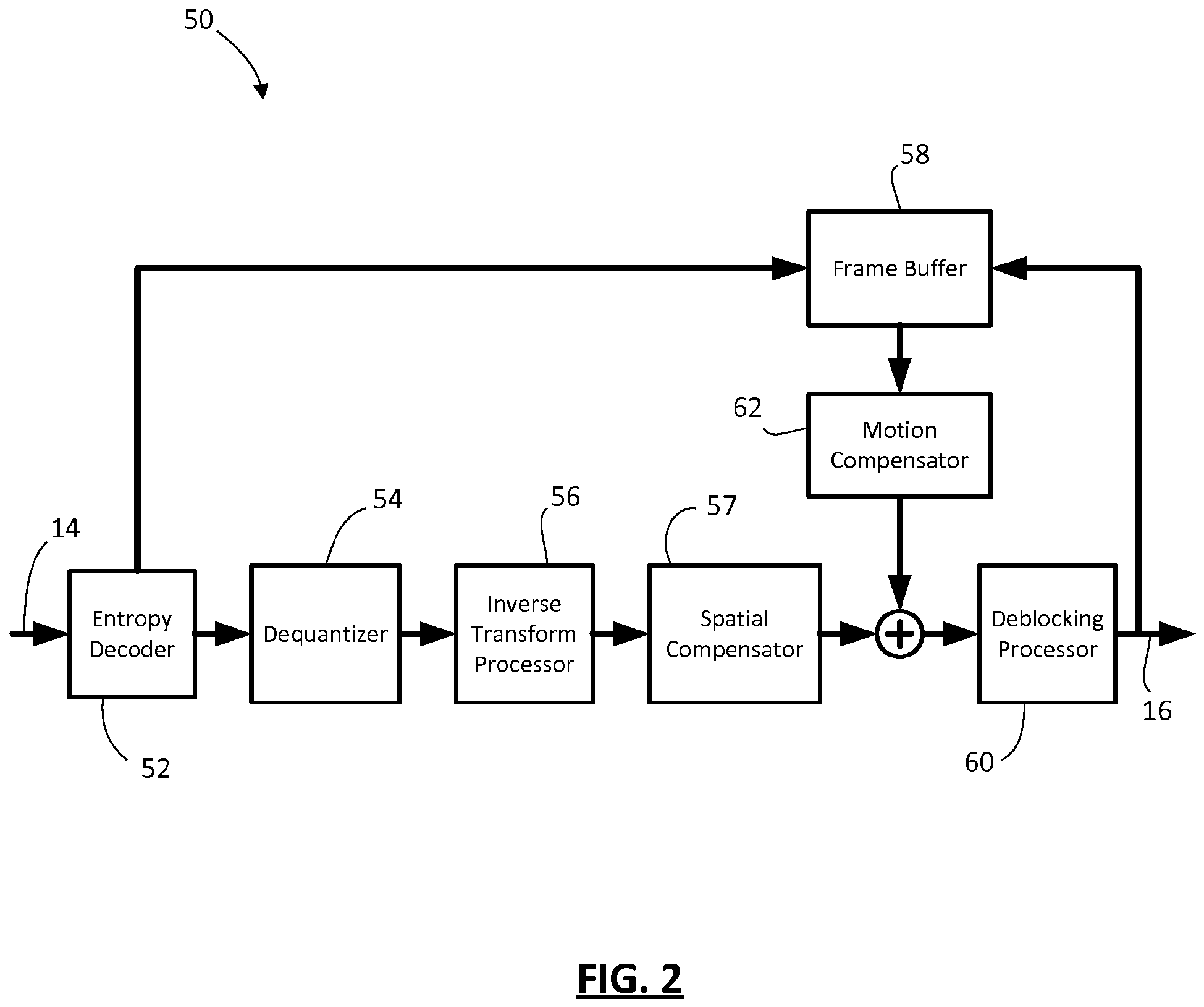 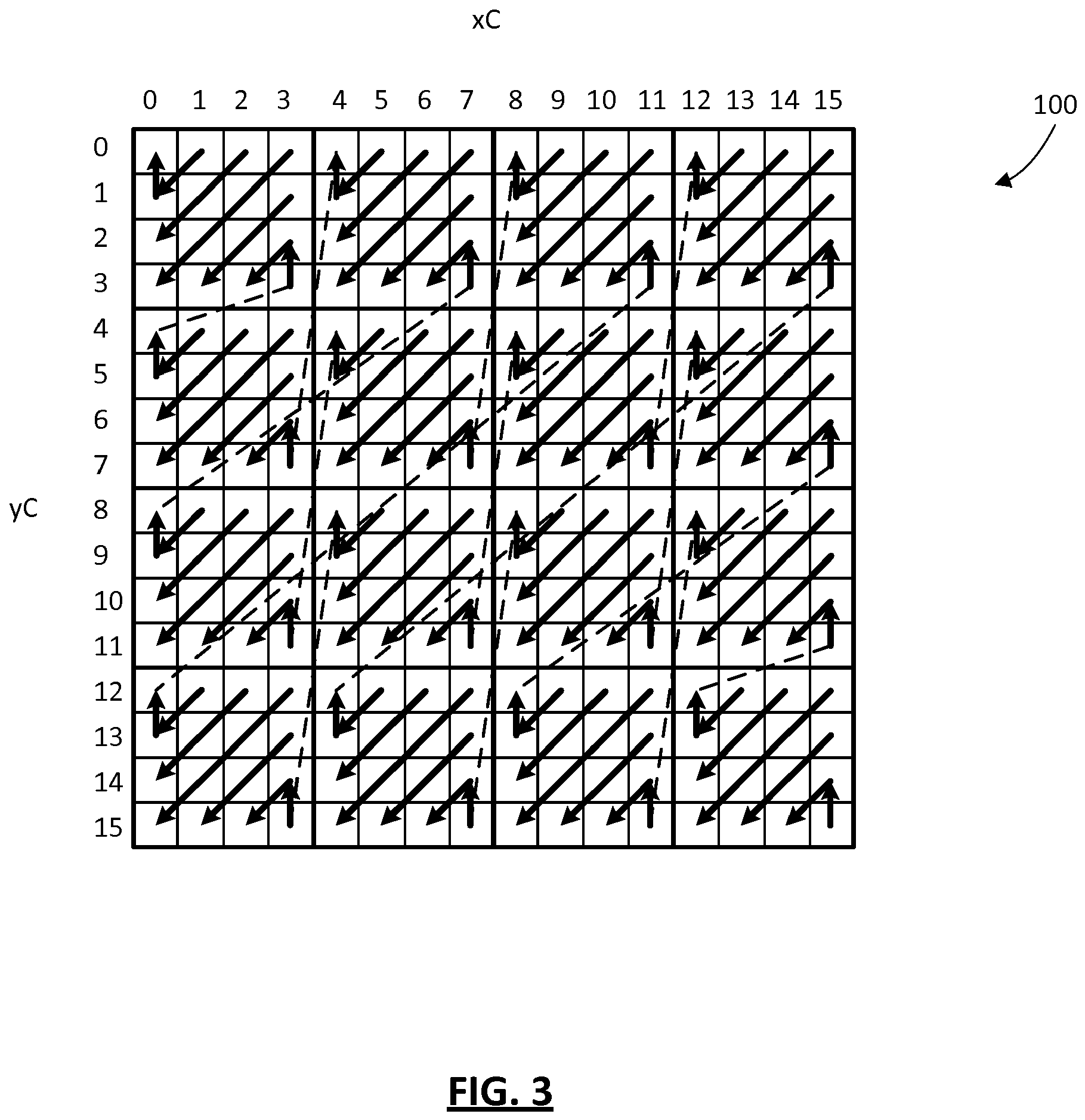 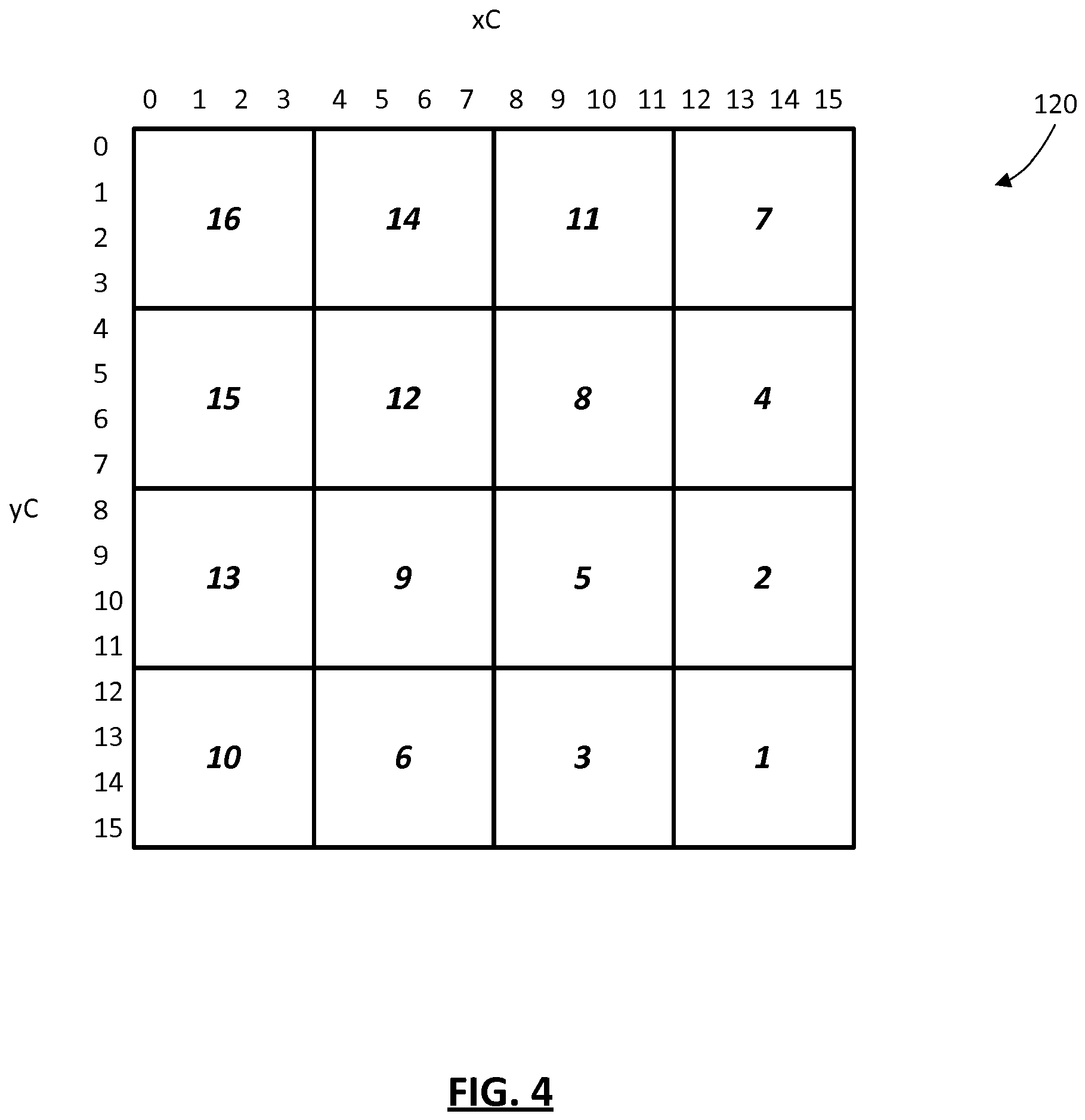 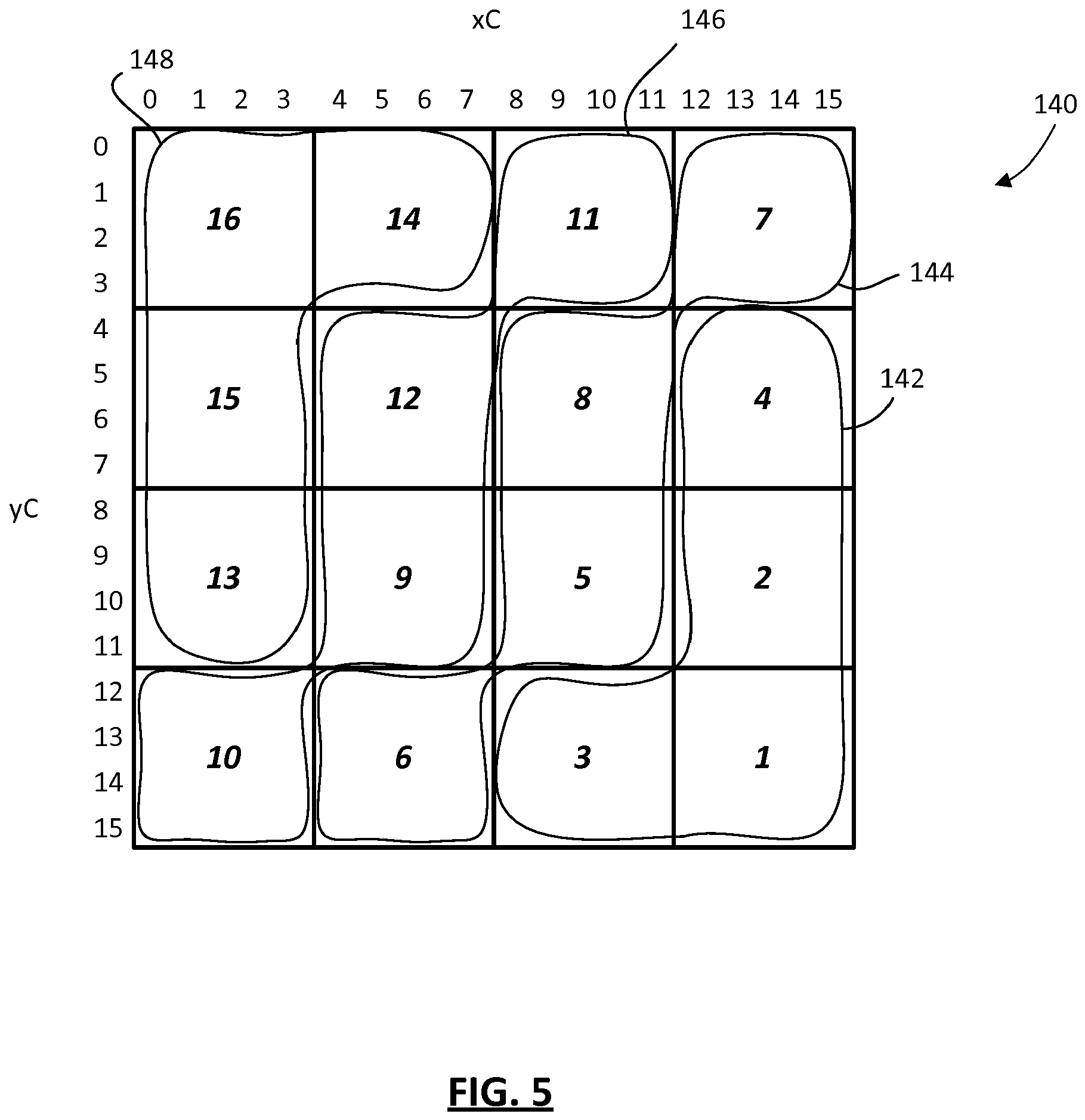 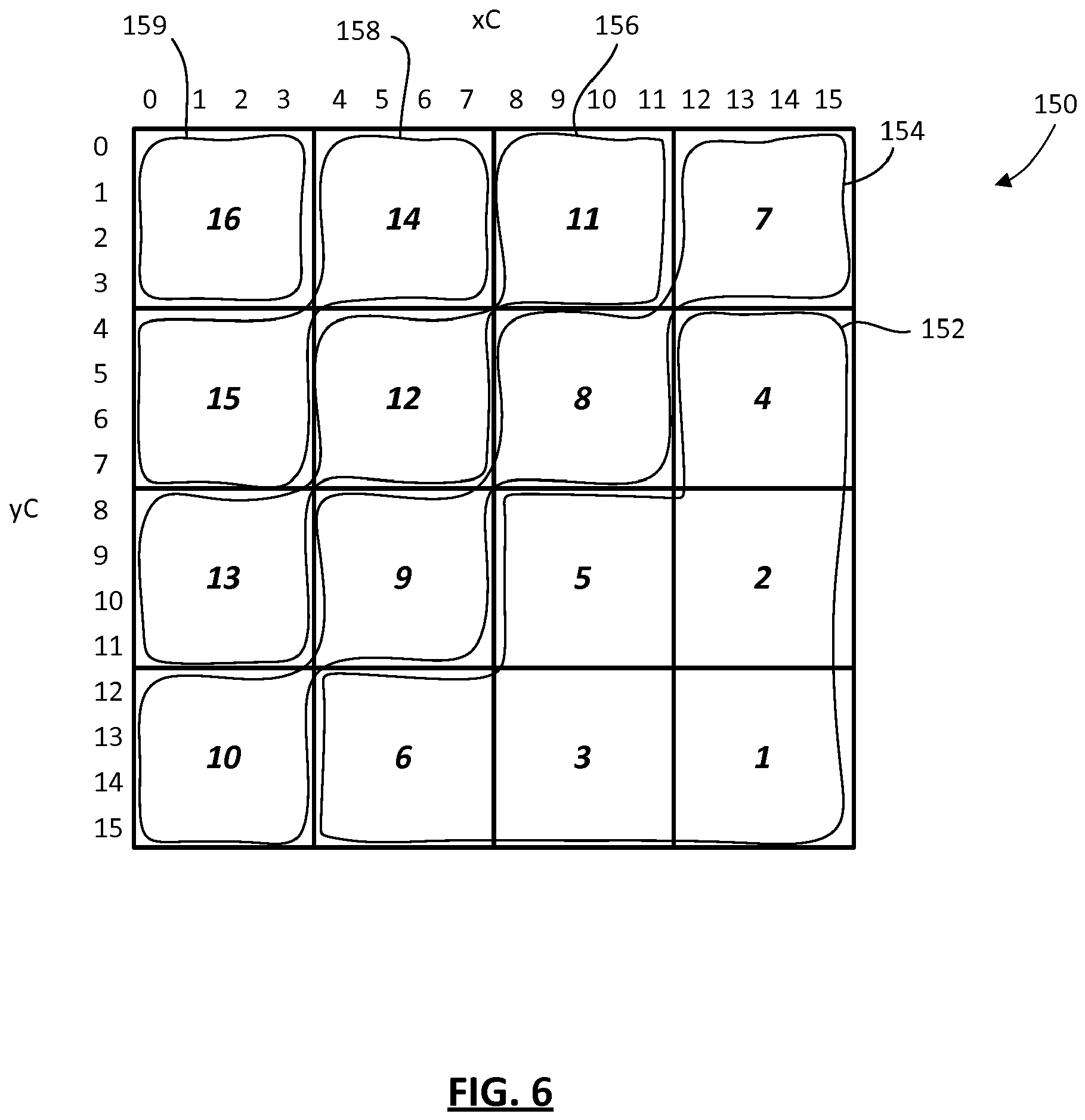 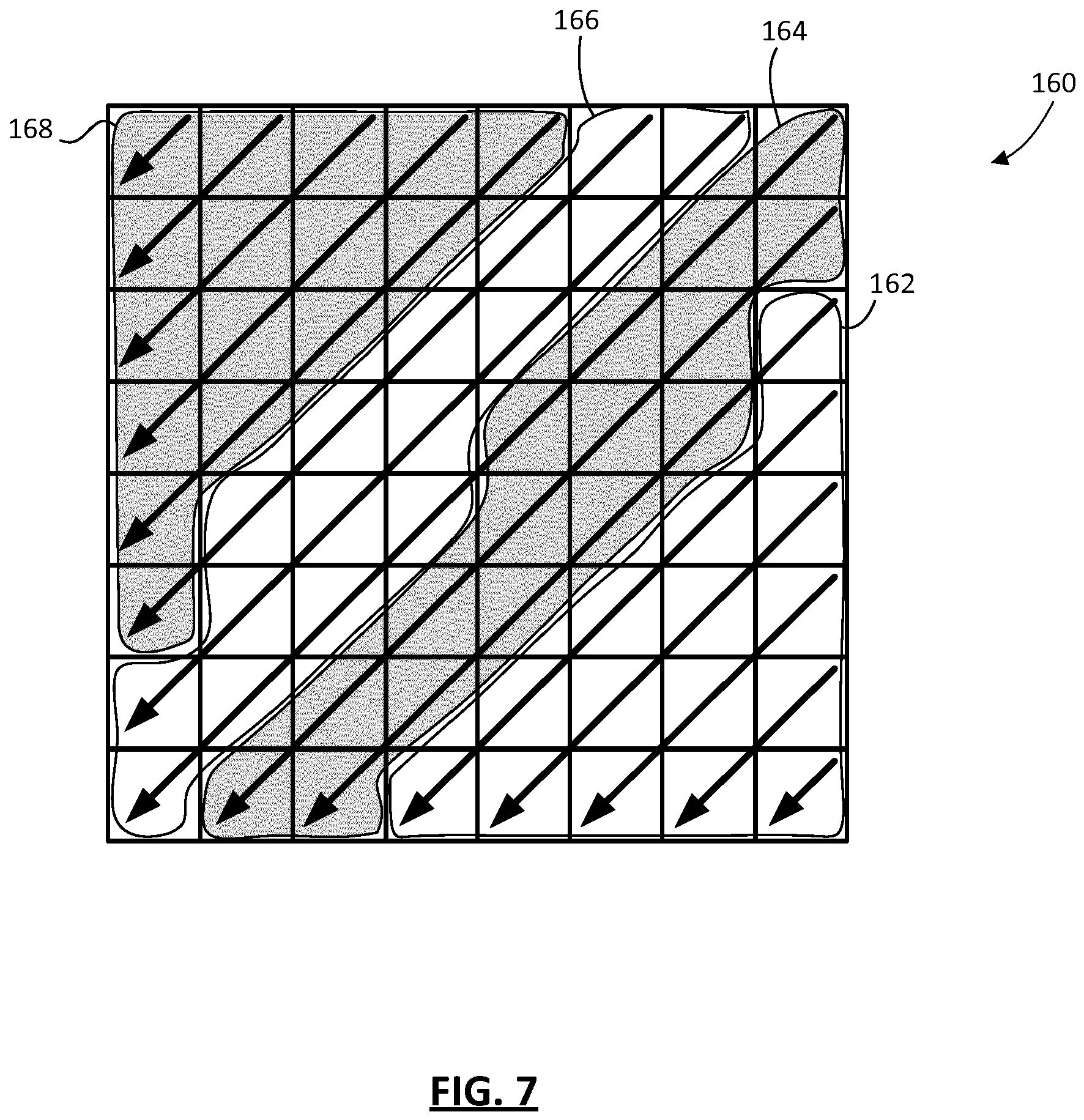 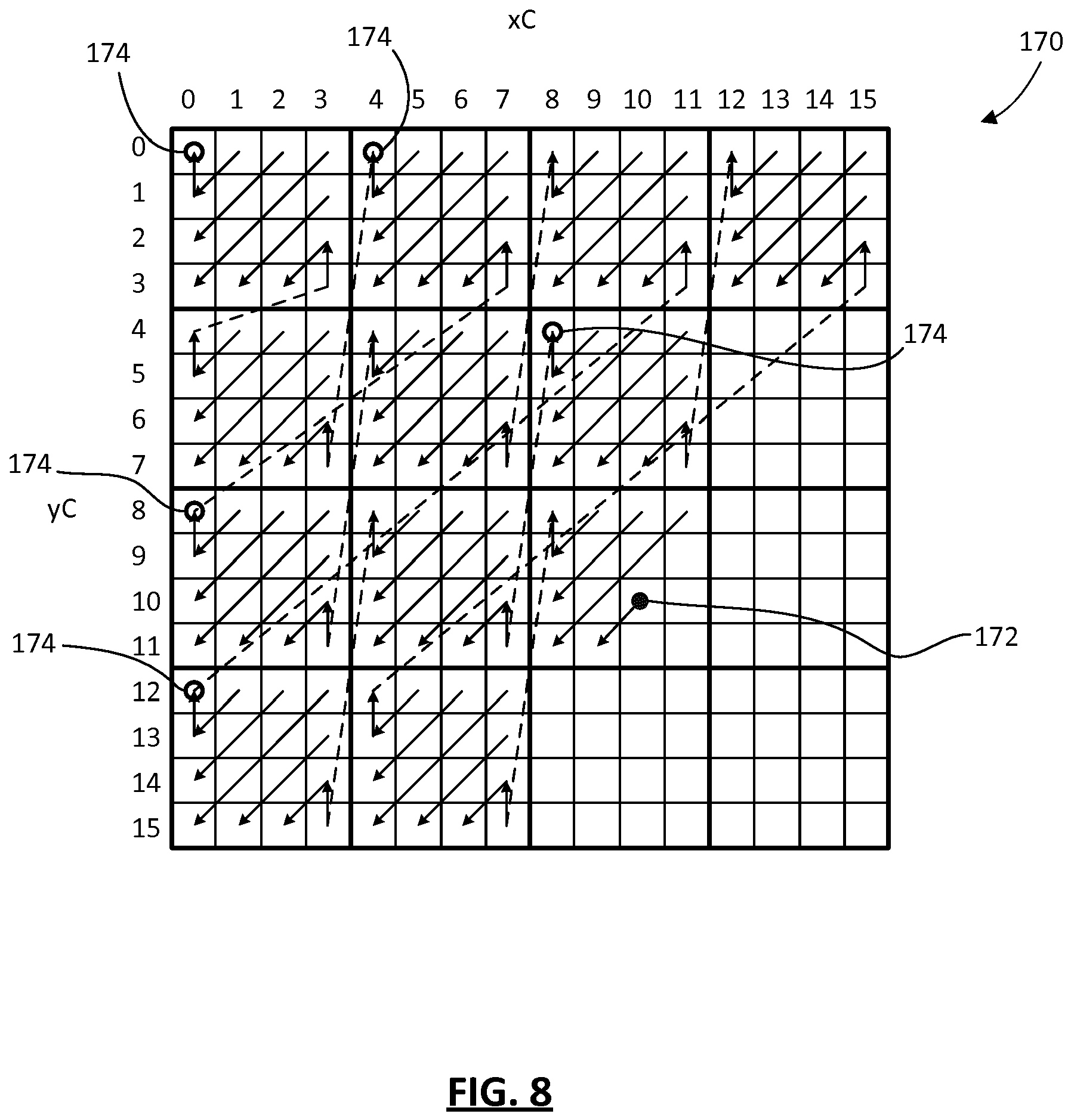 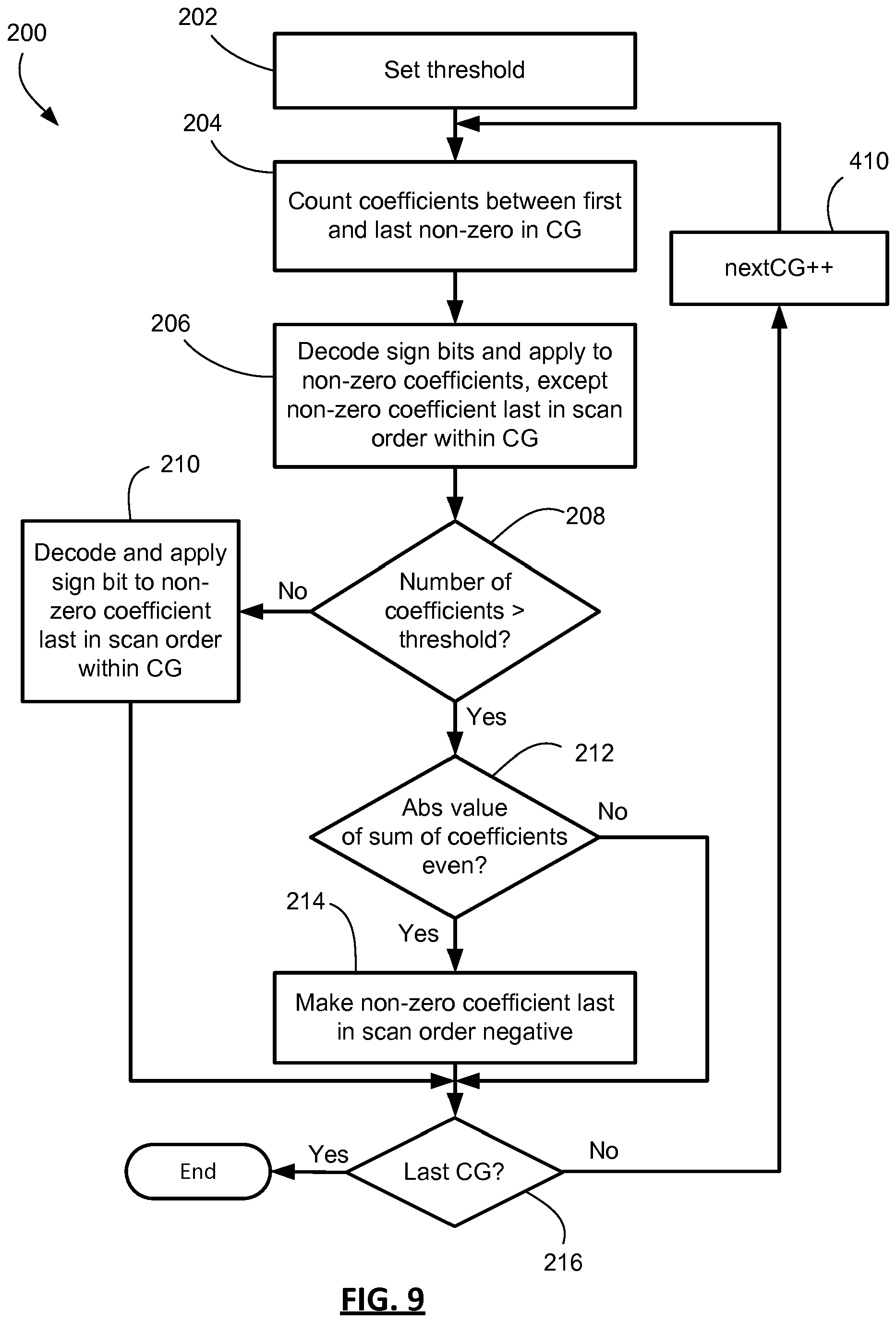 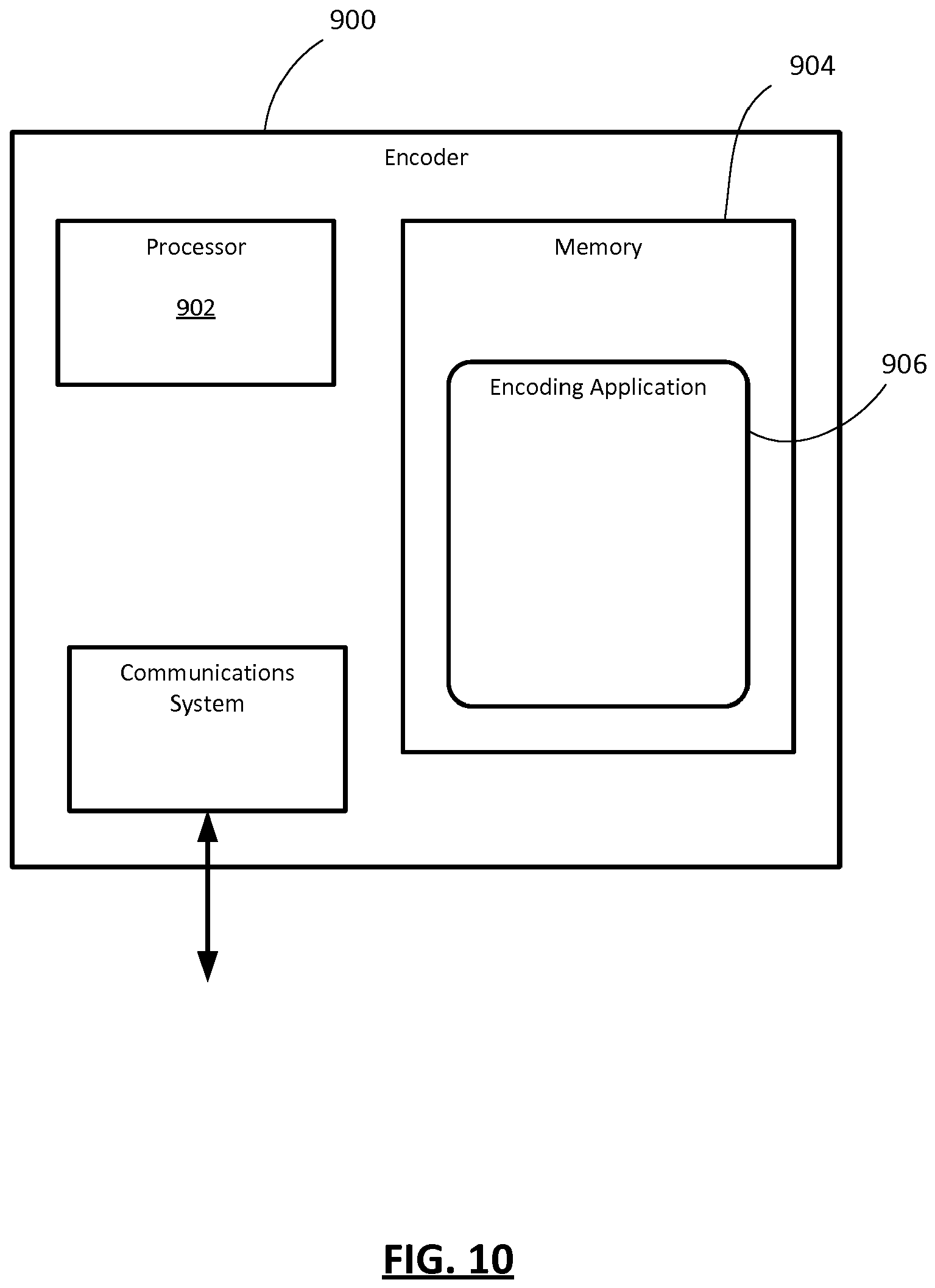 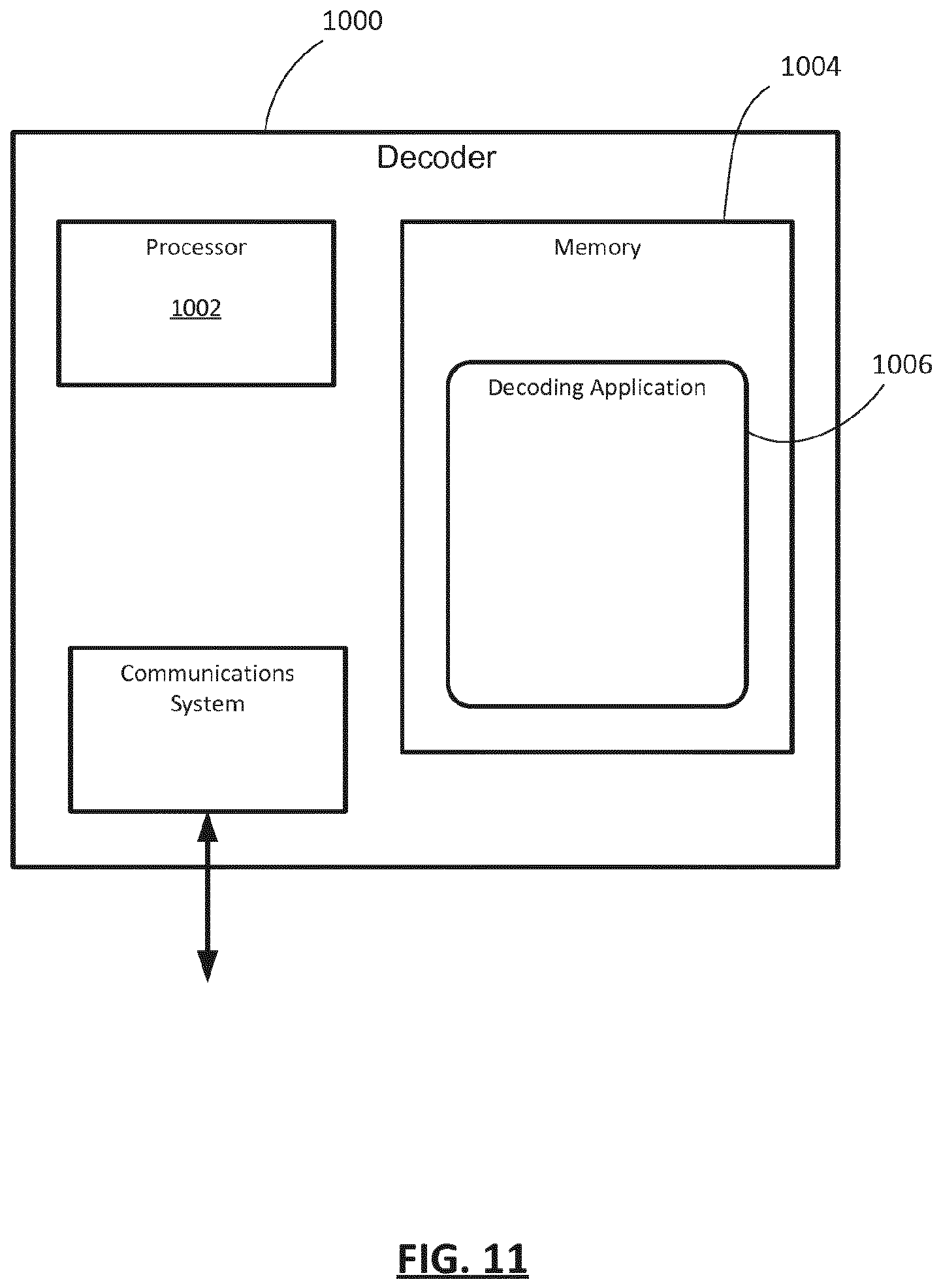