[0001] The present invention relates to an improved device for the plasma generation of oxygen radicals from air for use in cleaning analytical instruments such as scanning microscopes (SEM), scanning electron microprobes, transmission electron microscopes (TEM) and other charged-particle beam instruments that are subject to contamination problems from hydrocarbons. In particular, it relates to apparatus using a radio-frequency-excited hollow cathode (RF-HC) outside a vacuum container to create an excited gas plasma inside the vacuum container so that it becomes a plasma radical source.

2. Summary of the Prior Art

[0017] It is a general object of the present invention compared to prior art to modify the plasma source to avoid damaging sputtering inside the chamber and to raise the power of an RF hollow cathode electrode discharge to enable low voltage, high current operation to prevent overheating, erosion of the electrode, and particulate generation. Accordingly, several steps are taken to modify the source:
[0018] An aspect of the invention is set out according to appended claim 1. Embodiments of the invention are set out according to the appended dependent claims.
[0019] The hollow cathode electrode is mounted around a vacuum chamber made of an insulating dielectric material. This design removes the conductive material of the electrode from contact with ions from the plasma and sheath. The plasma chamber and electrode are then mounted inside an outer grounded shell for electrical safety. The gas exits the plasma chamber at the end of the shell via a vacuum flange into the main chamber of the instrument or tool to be cleaned. The plasma itself inside its sheath is contained mainly inside the cylinder or plasma chamber. The sheath will exhibit a tongue that will extend into the main chamber. The size of the tongue is governed by the applied RF power and the mean free path of the gas in vacuum. With some gases and gas mixtures at low pressures, a flowing afterglow will be exhibited outside the sheath in the chamber. This afterglow is generated by the decay of metastables in the out-flowing gas. With air, the afterglow has a distinct violet color at 386 nm caused by the decay of an N2 Δ1metastable. This color is often mistakenly described as pink. The atomic oxygen metastable is only weakly visible and is hard to see mixed with N2. Cleaning measurements show the nitrogen afterglow is a marker for the volume being cleaned by oxygen. Because there is no conductive material such as aluminum near the plasma sheath, the production of metal particulates like alumina is suppressed.
[0020] In a preferred embodiment of the invention, the reactant gas is air because it is a convenient source of oxygen. Other oxygen gas mixtures and pure oxygen can be used or reducing gas can be used. These mixtures can contain hydrogen, water vapor, He, Ar, Ne, F and compounds thereof. For cleaning by reduction H2 and ammonia could be used. The requirement is that reactions with the contaminant produce a volatile compound that can be removed by the pumps when the contamination reacts with plasma activated radicals or metastables.
[0021] With an exterior hollow cathode, the dielectric cylinder will partially enclose and define the plasma sheath, which will make a cylindrical shape inside. Ions will create secondary electrons when they collide with the diaelectric material and the expelled ions will be accelerated into the plasma by the sheath. Inside the plasma the high energy ions are very effective in ionization and disassociation of the gas molecules.

Figure 1A is a longitudinal section view of an embodiment of the present invention;

Figure 1B is a perspective view, partially in section, of the embodiment of Figure 1A;

Figure 2 is a perspective view of another embodiment of the present invention;

Figure 3A is a longitudinal section view of still another embodiment of the present invention;

Figure 3B is a perspective view, partially in section, of the embodiment of Figure 3A; and

Figure 4 is a graphical comparison of data showing that Macor® ceramic produces a denser plasma than quartz when it is used as the dielectric cylinder 1.

1. A device for the production of plasma using a radio-frequency hollow cathode discharge configured to deliver reactive particles to a vacuum chamber, the device comprising said vacuum chamber;

a) a hollow cylinder (1) formed of a dielectric material, the cylinder (1) defining in its interior a plasma chamber and having an exterior diameter and an upstream end in communication with a source of gas through a gas flow control device (34);

c) said vacuum chamber is in fluid communication with a downstream end of the hollow cylinder (1), which is thus, in use, itself under vacuum conditions.

2. The device of any preceding claim, wherein the cylinder (1) is formed of a material comprising about 55% fluorophlogopite mica and 45% borosilicate glass.

5. The device of any one of claims 1-3, wherein the gas is hydrogen.

6. The device of any preceding claim, wherein the opposing end of the cylinder (1) is closed by an end wall (21) formed of the dielectric material and the gas enters through a hole in the end wall.

7. The device of any preceding claim, wherein a virtual anode is formed by the hollow cathode effect along a central axis of the cylinder (1) in the plasma and a ground is defined by the vacuum chamber walls.

8. The device of any preceding claim, wherein the cylindrical electrode (4) is a brass cylinder around the exterior diameter of the hollow cylinder (1).

9. The device of any preceding claim, wherein the gas flow control device (34) includes an aperture (20).

10. The device of any preceding claim, wherein the gas flow control device is a variable valve (32). 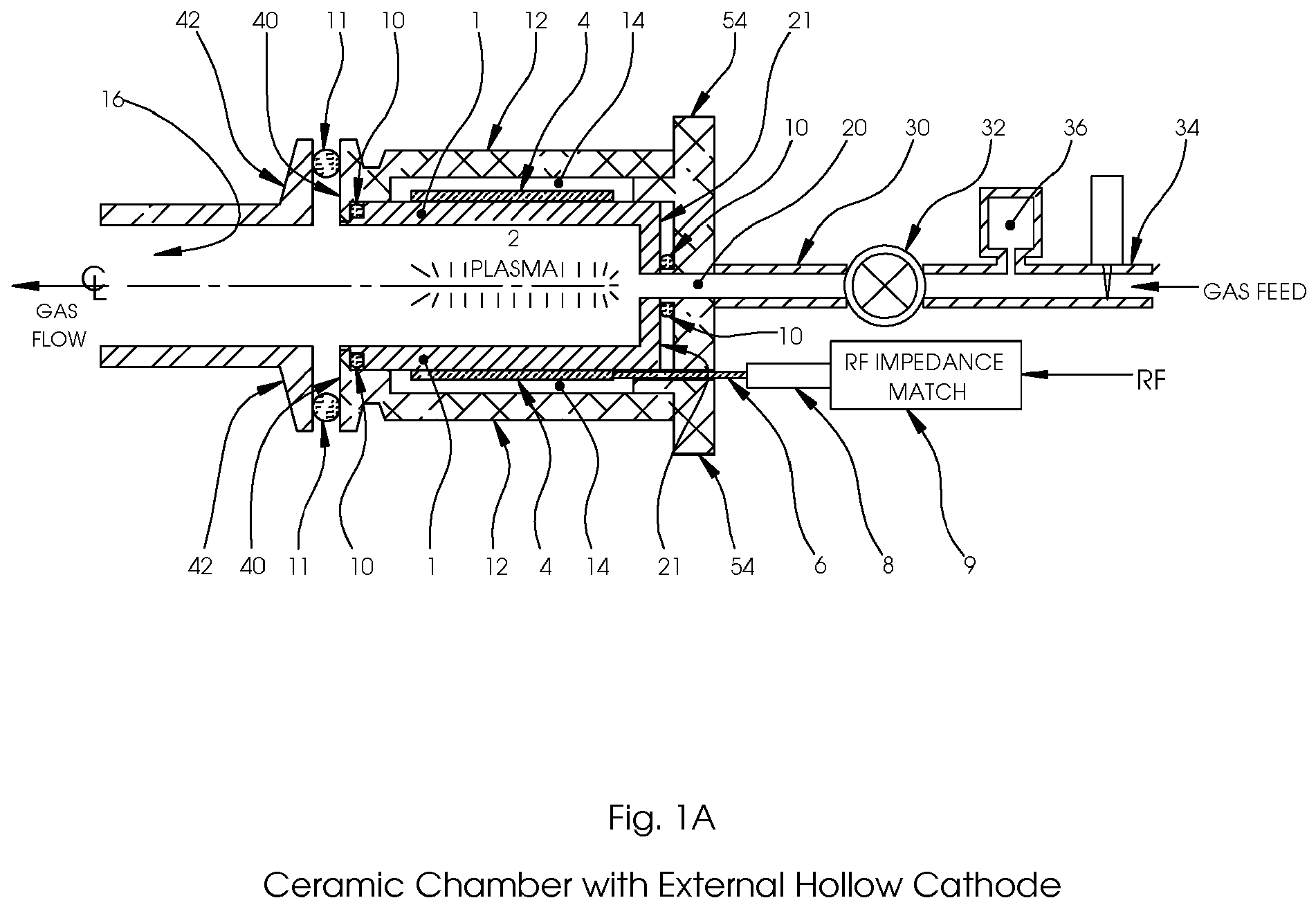 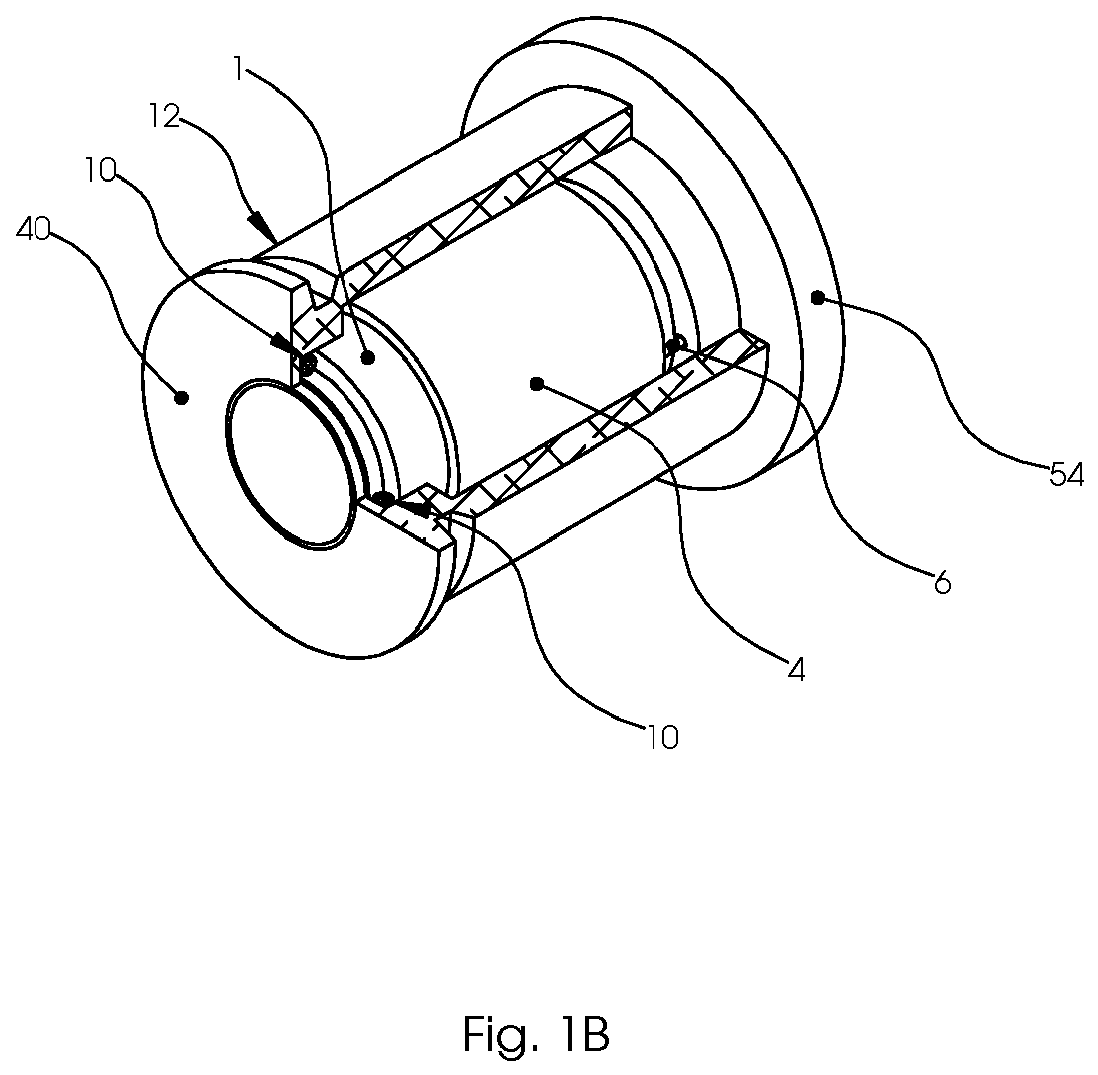 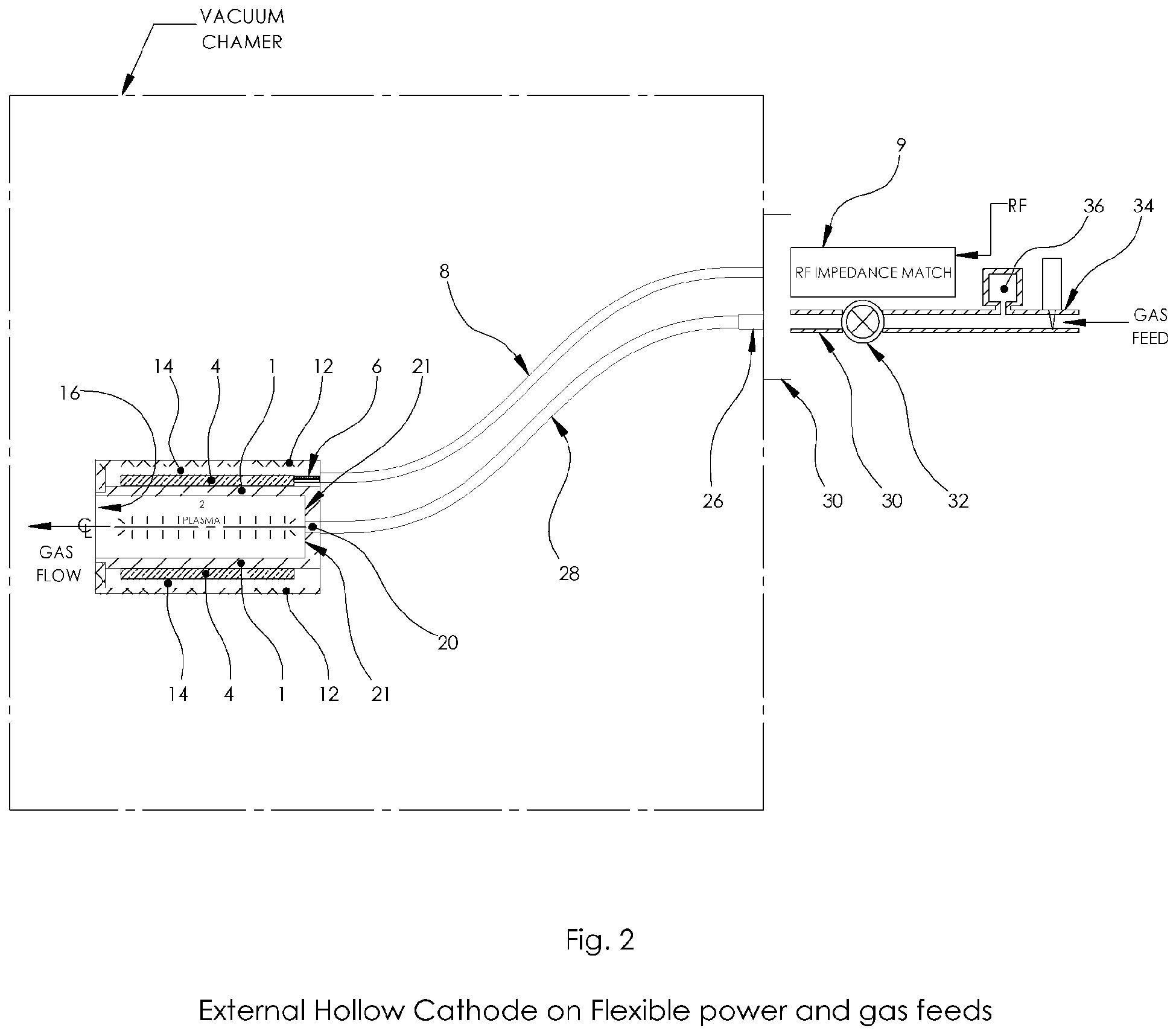 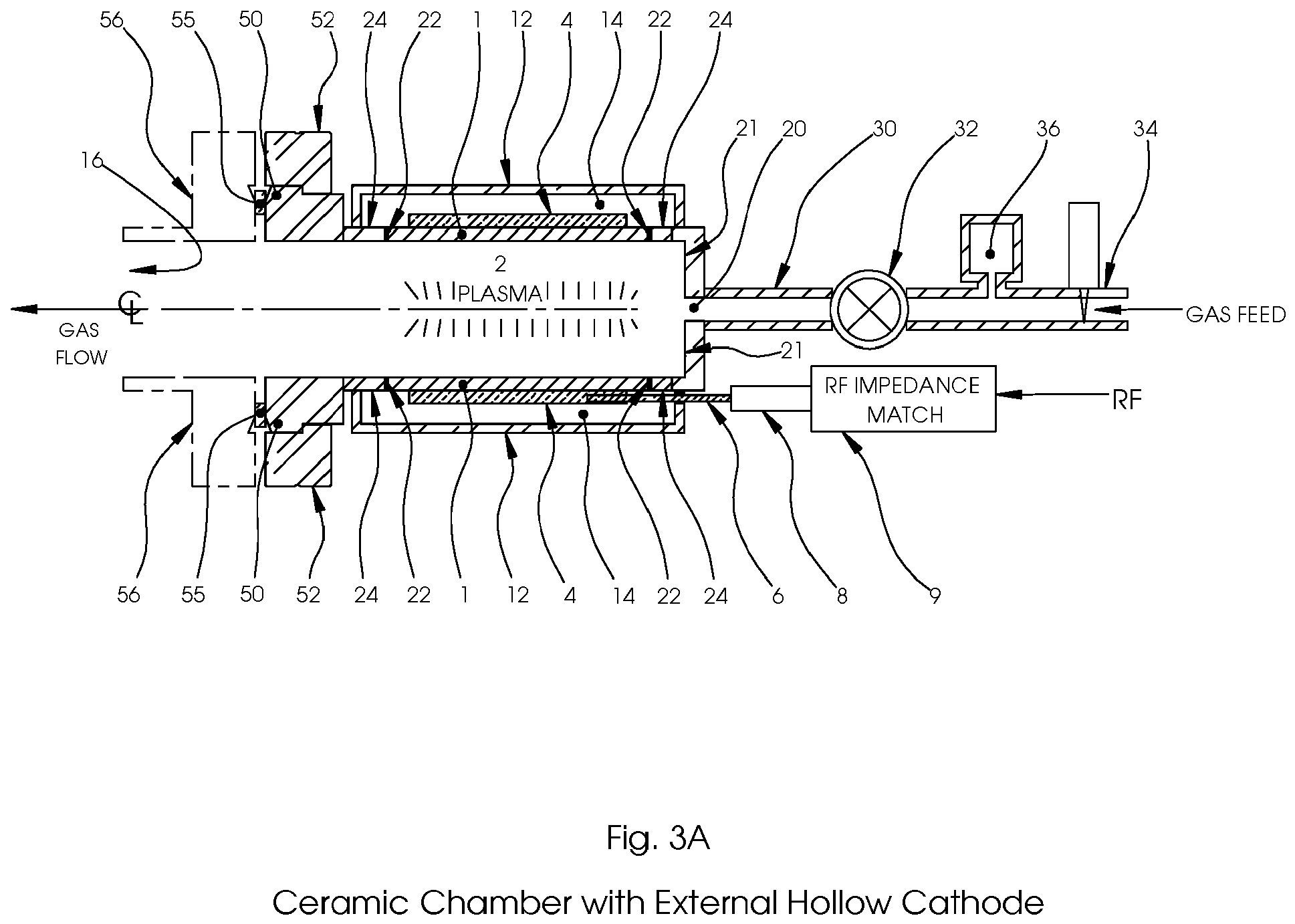 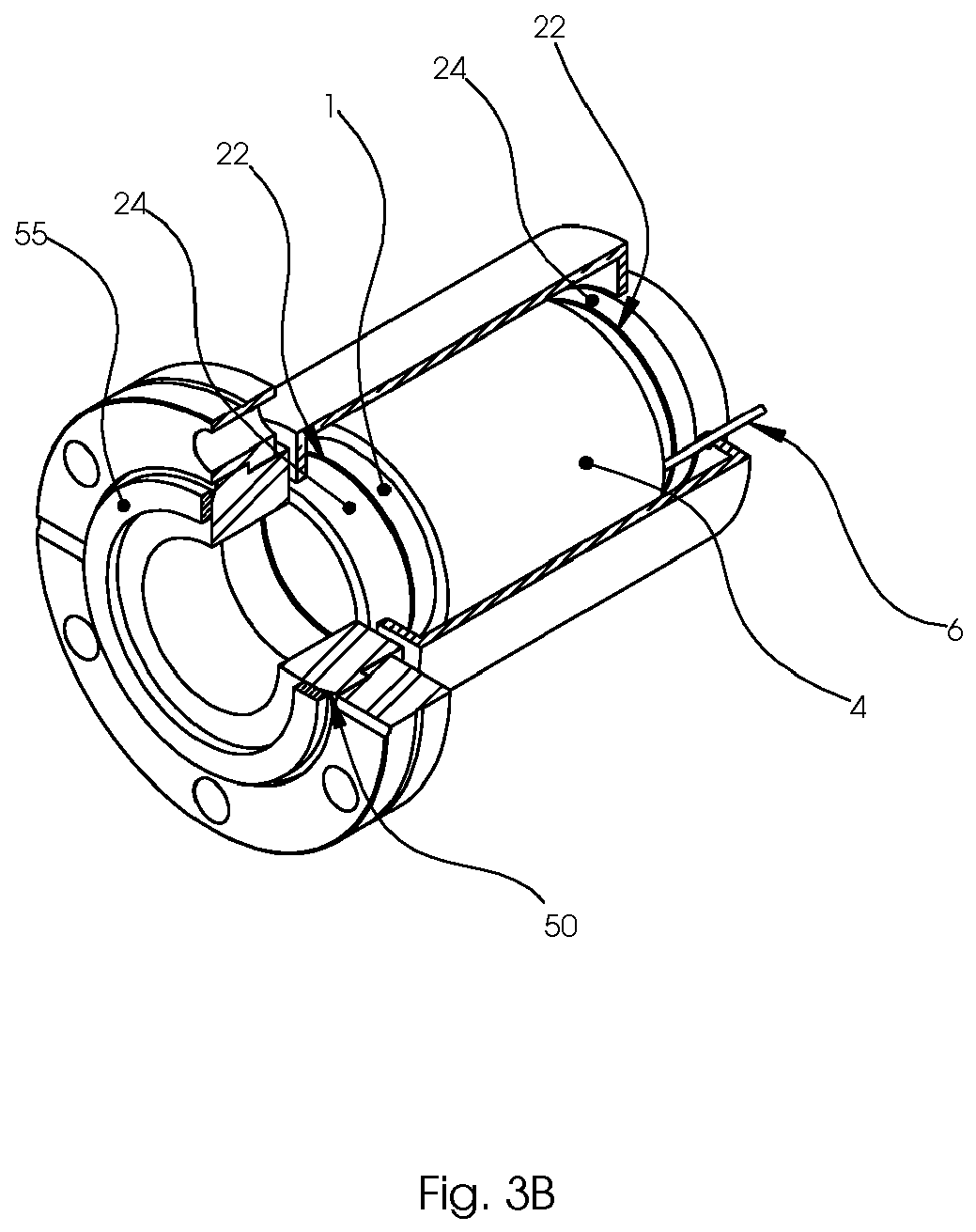 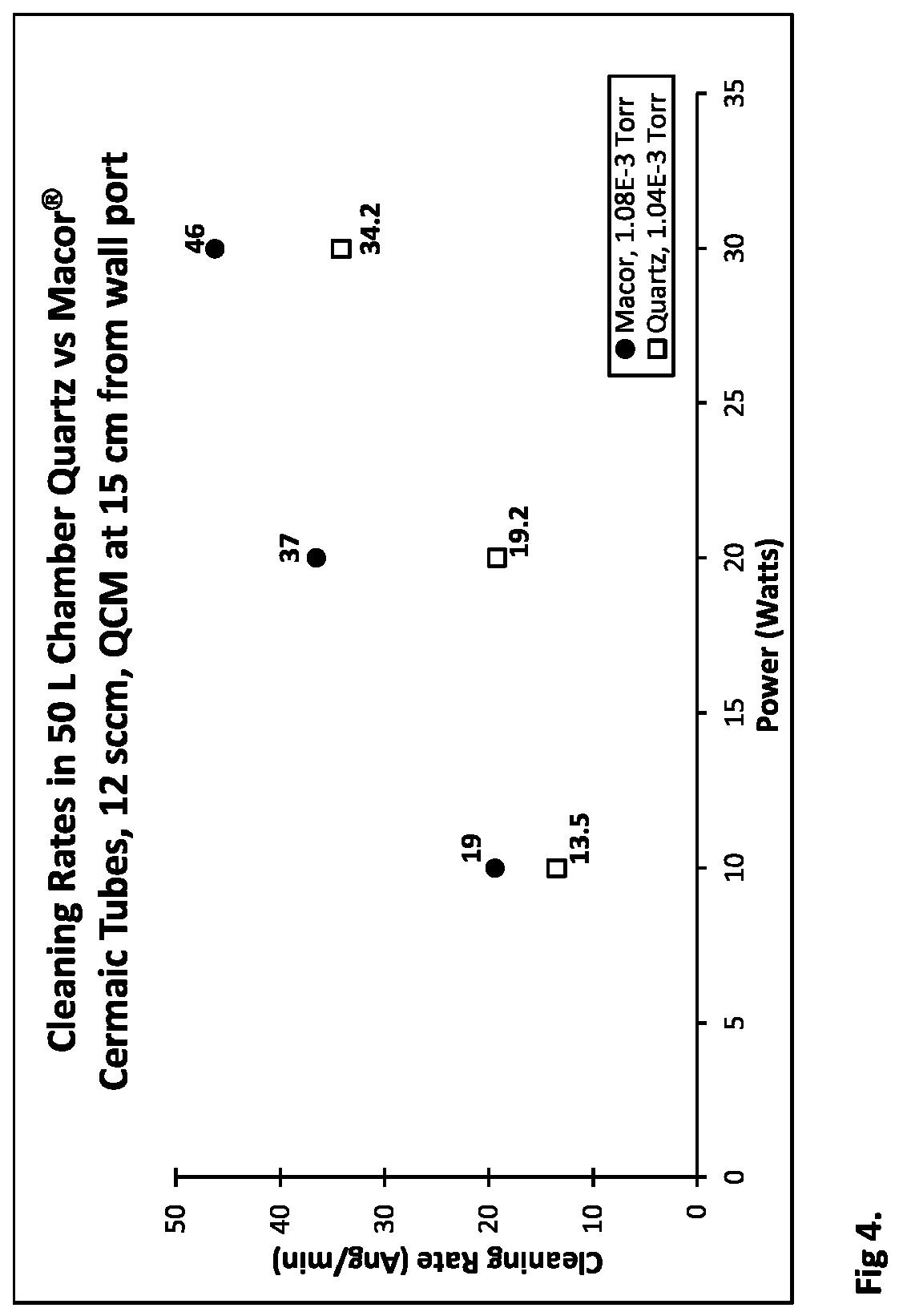