[0001] The present invention relates generally to invasive diagnostic techniques, and specifically to mapping of physiological parameters inside the body.

[0002] A wide range of medical procedures involve placing objects, such as sensors, tubes, catheters, dispensing devices, and implants, within the body. Position sensing systems have been developed for tracking such objects. Magnetic position sensing is one of the methods known in the art. In magnetic position sensing, magnetic field generators are placed below the patient's torso at known positions external to the patient. A magnetic field sensor within the distal end of a probe generates electrical signals in response to these magnetic fields, which are processed in order to determine the position coordinates of the distal end of the probe. These methods and systems are described in U.S. Pat. Nos. 5,391,199, 6,690,963, 6,484,118, 6,239,724, 6,618,612 and 6,332,089, in PCT Patent Publication WO 96/05768, and in U.S. Patent Application Publications 2002/0065455 A1, 2003/0120150 A1 and 2004/0068178 A1.
[0003] When placing a probe within the body, it may be desirable to have the distal tip of the probe in direct contact with body tissue. The contact can be verified by measuring either the electrical impedance or the contact pressure between the distal tip and the body tissue. U.S. Patent Application Publications 2007/0100332, to Paul et al., and 2009/0093806, to Govari et al., for example, describe methods of sensing contact pressure between the distal tip of a catheter and tissue in a body cavity using a force sensor embedded in the catheter.
[0004] US 2006/2000049 A1 relates to an apparatus for diagnosing or treating an organ or vessel, wherein a deformable body having at least two optical fiber sensors disposed in a distal extremity thereof is coupled to processing logic programmed to compute a multi-dimensional force vector responsive to detected changes in the optical characteristics of the optical fiber sensors arising from deflection of the distal extremity resulting from contact with the tissue of the wall of the organ or vessel. The force vector may be used to facilitate manipulation of the deformable body either directly or automatically using a robotic system.
[0005] EP 2248480 A1 relates to a method and apparatus that utilizes a force-time integral for real time estimation of lesion size in catheter-based ablation systems. The apparatus measures the force exerted by a contact ablation probe on a target tissue and integrates the force over an energization time of the ablation probe. The force-time integral can be calculated and utilized to provide an estimated lesion size (depth, volume and/or area) in real time. The force-time integral may also account for variations in the power delivered to the target tissue in real time to provide an improved estimation of the lesion size. In one embodiment, the force metric can be used as feedback to establish a desired power level delivered to the probe to prevent steam popping.
[0006] EP 1070480 A2 relates to a method of diagnosing an abnormal condition in a biological structure, such as the heart, including the steps of measuring a physiological response at at least three sampled points on a surface of the biological structure, calculating a vector function related to the response, displaying a representation of the vector function, and inferring the abnormal condition from the representation. The present invention is particularly useful for diagnosing cardiac arrhythmias, in which case the physiological response is a voltage, from which is inferred a local activation time and the vector function is a gradient of the local activation time, specifically, a conduction velocity.
[0007] US 5598848 A relates to systems and methods that evaluate electrical contact between the myocardium and one or more electrodes inside the heart. The systems and methods electrically sense electrical contact between the myocardium and electrodes and generate unitary contact-indicating outputs indicating the presence or absence of electrical contact between the myocardium and each particular electrode. The systems and methods also correlate the electrode-specific unitary outputs to generate a compound contact-indicating output. The compound output represents the aggregate of the electrical contact between the myocardium and multiple electrodes on a multiple electrode array.
[0008] WO 2007/050960 A2 relates to systems and methods for assessing electrode-tissue contact for tissue ablation. An exemplary electrode contact sensing system comprises an electrode housed within a distal portion of a catheter shaft. At least one electro-mechanical sensor is operatively associated with the electrode within the catheter shaft. The at least one electro-mechanical sensor is responsive to movement of the electrode by generating electrical signals corresponding to the amount of movement. The system may also include an output device electrically connected to the at least one electro-mechanical sensor. The output device receives the electrical signals for assessing a level of contact between the electrode and a tissue.

[0016] The disclosure is herein described, by way of example only, with reference to the accompanying drawings, wherein:

Figure 1 is a schematic pictorial illustration of a mapping system, in accordance with an embodiment of the present invention;

Figure 2 is a schematic side view showing details of the distal portion of a catheter, in accordance with an embodiment of the present invention; and

Figure 3 is a flow diagram that schematically illustrates a method of gated mapping based on contact quality, in accordance with an embodiment of the present invention.

1. Apparatus for mapping a body cavity of a subject, comprising:

a probe (18), having a distal end (20) configured for insertion into a body cavity and comprising a contact sensor for measuring a respective contact quality between the probe (18) and a tissue at multiple locations in the body cavity; and

wherein the probe (18) comprises a position transducer (42), which is configured to provide to the console an input indicative of location coordinates of a distal end of the probe inside the body cavity, wherein the position transducer is configured to provide the location coordinates to the console only when the contact quality is within the defined range;

characterised in that the console (24) is configured to add tags to the map (34) indicating the respective contact quality at one or more of the locations. 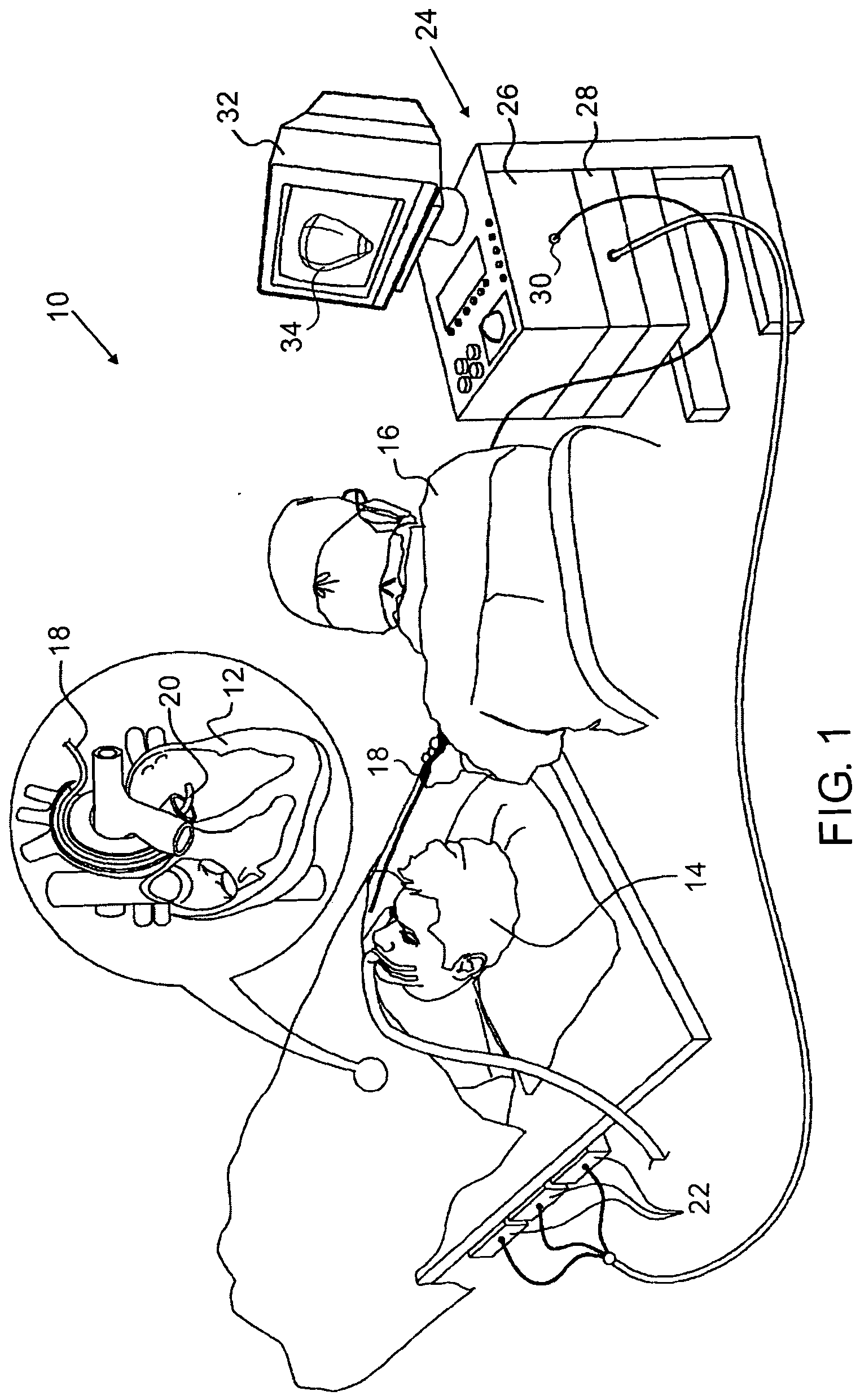 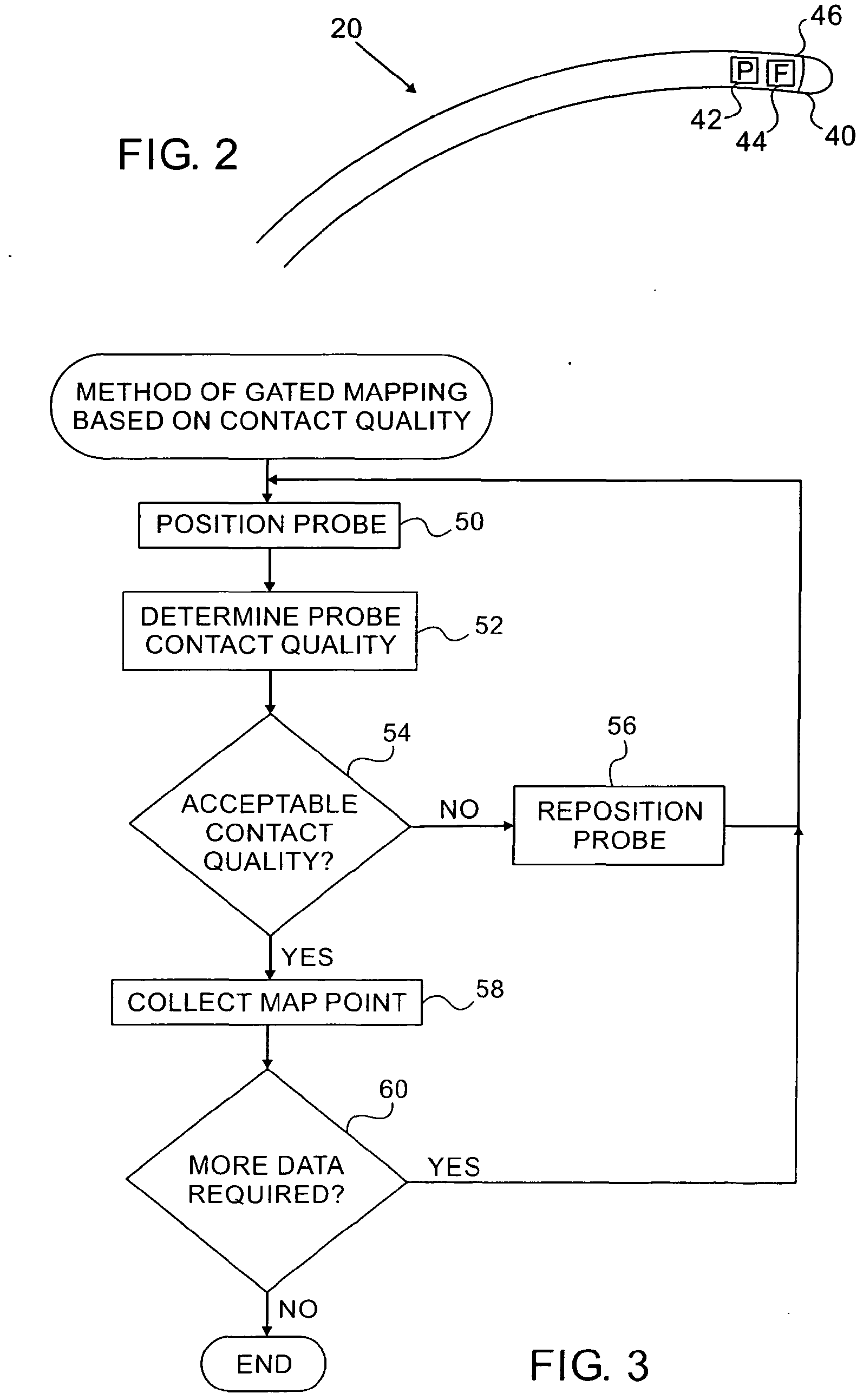