Technical field of the invention

[0001] The invention relates to the technical field of wheel hubs, in particular for driving axles of commercial vehicles, and it especially concerns the sealing system built-in in the hub.

[0002] The assembly of some hubs involves the use of sealing rings for different reasons. First of all, in order to prevent dust from getting into the hub with an obvious deterioration of the sliding parts, especially the bearings.
[0003] Under other circumstances, the sealing of the hub is also carried out in order to prevent possible lubricant liquids from getting out of the hub, thus leaking into the surrounding environment.
[0004] According to a solution of the known art, which is shown in figure 1, the axle (or axle bridge) A comprises a flange FL, on which the support H of the bearing is fixed, with the bearing B press fitted on the inside.
[0005] The bearing B, in turn, supports the axle shaft WA of the wheel.
[0006] Therefore, the bearing B consists of an outer part B1, which is fixed to the support H of the bearing, and a rotating part B2, which rotates with respect to the fixed part and is integral to the axle shaft WA.
[0007] According to the solution of the known art, the sealing is obtained by means of a first, radially sealing gasket 140, which is interposed between the fixed part B1 of the bearing and the hub H, and a second, axially sealing gasket 145, which is interposed between the hub H and the flange FL.
[0008] Figure 2 shows an enlargement of the portion of the hub of figure 1.
[0009] Hence, the flange FL of the axle bridge, together with the bearing support H of the axle shaft WA, helps define the hub of the vehicle wheel.
[0010] This configuration, though effective in terms of sealing, causes assembly problems for both gaskets 140 and 145. The assembly sequence involves associating the axle shaft WA with the support H and, subsequently, the hub - obtained by so doing - with the flange FL of the axle A.
[0011] The seat of the first, axially sealing gasket 140, of course, is made so as not to preload the gasket in a radial direction; therefore, as long as the hub is not associated with the flange, the first gasket tends to slip out of its seat, often remaining axially locked between the hub and the flange. Due to this problem, not only must the operation be carried out different times, until it is successful, but it is also often necessary to replace the gasket that might have deformed.
[0012] Moreover, the position of the gasket 145 is not ideal, as the possible control and replacement thereof must be carried out by disassembling the bearing B from the relative support H and, since the bearing usually is driven into the support, the operation is not easy.
[0013] DE3128341 discloses a wheel hub whose features are in the preamble of claim 1.

[0014] Therefore, the object of the invention is to simplify the operations to be carried out to assemble a wheel hub, by acting upon the sealing system of the hub.
[0015] The idea on which the invention is based is that of changing the interaction between the parts making up the hub. More in particular, the idea is that of creating a sealing between the flange of the axle and the fixed part of the bearing.
[0016] This implies that the bearing and the flange must mechanically interact with one another in a direct manner and not indirectly though the bearing support.
[0017] The seat of the gasket is obtained between the complementary parts of the fixed part of the bearing and of the flange of the axle, so as to obtain a radial seal.
[0018] This seal preferably is the only seal of the hub, with an evident reduction of the components.
[0019] According to a further preferred embodiment of the invention, the gasket is of the type having an X-shaped cross section.
[0020] The subject-matter of the invention comprises a wheel hub with an improved sealing system, in particular for the commercial and industrial vehicles, according to figure 1. The subject-matter of the invention also comprises a commercial or industrial vehicle having an axle and a wheel hub according to the description above.
[0021] Furthermore, said axle, to which the hub belongs, can be both driving and passive, which means that the axle shaft is not connected to the vehicle transmission.
[0022] Another subject-matter of the invention is a method for assembling the aforesaid hub.
[0023] The claims describe preferred embodiments of the invention, thus forming an integral part of the description.

[0024] Further objects and advantages of the invention will be best understood upon perusal of the following detailed description of an embodiment thereof (and of relative variants) with reference to the accompanying drawings merely showing non-limiting examples, wherein:

figure 1 shows an axial section of a wheel hub according to the prior art, and figure 2 shows an enlargement of a part of figure 1;

figure 3 shows an axial section of a wheel hub according to a preferred variant of the invention, and figure 2 shows an enlargement of a portion of figure 3.

[0025] In the figures, the same numbers and the same reference letters indicate the same elements or components.
[0026] For the purposes of the invention, the term "second" component does not imply the presence of a "first" component. As a matter of fact, these terms are only used for greater clarity and should not be interpreted in a limiting manner.

[0027] The invention offers an improvement with respect to the prior art and, therefore, the components making it up are the same, except for the differences that distinguish it from the prior art, which are described in detail hereinafter.
[0028] Just like the one of the prior art, the hub according to the invention, shown in figures 3 and 4, comprises a flange FL of an axle bridge A. In order to make the description simple, when possible, we used the same numbers and the same reference letters identifying the same parts or equivalent parts of figures 1 and 2 of the prior art. Figures 3 and 4 show an axle bridge that is typically used in driving axles; however, the concepts described below can also be applied to non-driving axles.
[0029] The hub also comprises a bearing support H intended to be axially associated with the flange FL and a bearing B press fitted inside the bearing support H. The bearing has a fixed and externally complementary part B1 to the bearing support H and a rotating part B2 adapted to rotatingly support an axle shaft WA. The latter has an outer end WA1 intended to be associated with a wheel and an inner end WA2, opposite the outer end, if necessary connected to a vehicle transmission.
[0030] The fixed part B1 of the bearing usually is cylindrical.
[0031] The hub comprises a sealing system formed by a gasket G and a related seat S. According to the invention, the seat is arranged for direct interaction between the fixed part B1 and the flange FL and to preload the gasket G radially. This implies that the inner end of the bearing B, when the latter is associated with the bearing support H, emerges from the support so that, when the hub is assembled, the fixed part of the bearing axially comes into contact with the flange.
[0032] The seat 2 of the gasket is defined by the interaction, i.e. by the coupling, between the bearing and the flange. Therefore, there is not annular groove specially made to house the gasket.
[0033] The flange FL preferably is bell-shaped and the relative inner cavity is bell-shaped or cylindrical, as well, so as to be complementary to the cylindrical shape of the fixed part B1 of the bearing B; by so doing, once the inner end of the bearing B has been inserted into the inner cavity of the flange, an annular interstice is defined, which is interposed between the flange and the fixed part B1 and helps define the seat S of the gasket.
[0034] Preferably, the flange/bearing coupling defines three sides of the seat S of the gasket G.
[0035] In particular, the seat has a rectangular shape with two adjacent sides defined by the flange, a third side defined by the fixed part B1 of the bearing B, and a fourth side defined by the bearing support H.
[0036] The bearing support H preferably is bell-shaped, with an end H1 intended to be associated with said flange, defining a radial joining surface, and comprises a cylindrical crest CC, coaxial with the extension XX of the bearing support H, structured to be inserted into said annular interstice blocking it.
[0037] The cylindrical crest CC preferably is bevelled both on the outer edge and on the inner edge, so as to simplify the hub assembling operations.
[0038] Clearly, many parts of the hub have an axial symmetry according to the symmetry axis XX.
[0039] Figures 3 and 4 reveal that the gasket has an X-shaped cross section. This solution has turn out to be optimal, as, after the gasket has been fitted onto the bearing B, the bearing support/bearing/axle shaft assembly can be inserted into the flange FL, without any risk for the gasket to twist on itself due to rubbing.
[0040] Therefore, according to a preferred assembly method for assembling the hub, the following steps are carried out:
[0041] According to further aspects of the invention, a possible brake calliper support can be in one piece with the bearing support or in one piece with the flange.
[0042] The non-limiting example described above can be subjected to variations When reading the description above, a skilled person can carry out the subject-matter of the invention without introducing further manufacturing details.

1. Wheel hub with improved sealing system for being associated with an axle shaft (WA) having an outer end (WA1) intended to be associated with a wheel and an inner end (WA2), opposite the outer end, in particular for a commercial or industrial vehicle, comprising:

- a bearing support (H) intended to be axially associated with the flange,

- a sealing system formed by a gasket (G) and a related seat (S),
the wheel hub being characterized in that said seat is arranged

- inserting the inner end of the axle shaft (WA) into the bearing support (H),

- blocking the inner end of the axle shaft with a ring nut (GH),

- press fitting the gasket (G) onto the part of bearing that emerges from the bearing support,

- associating the bearing support with the flange. 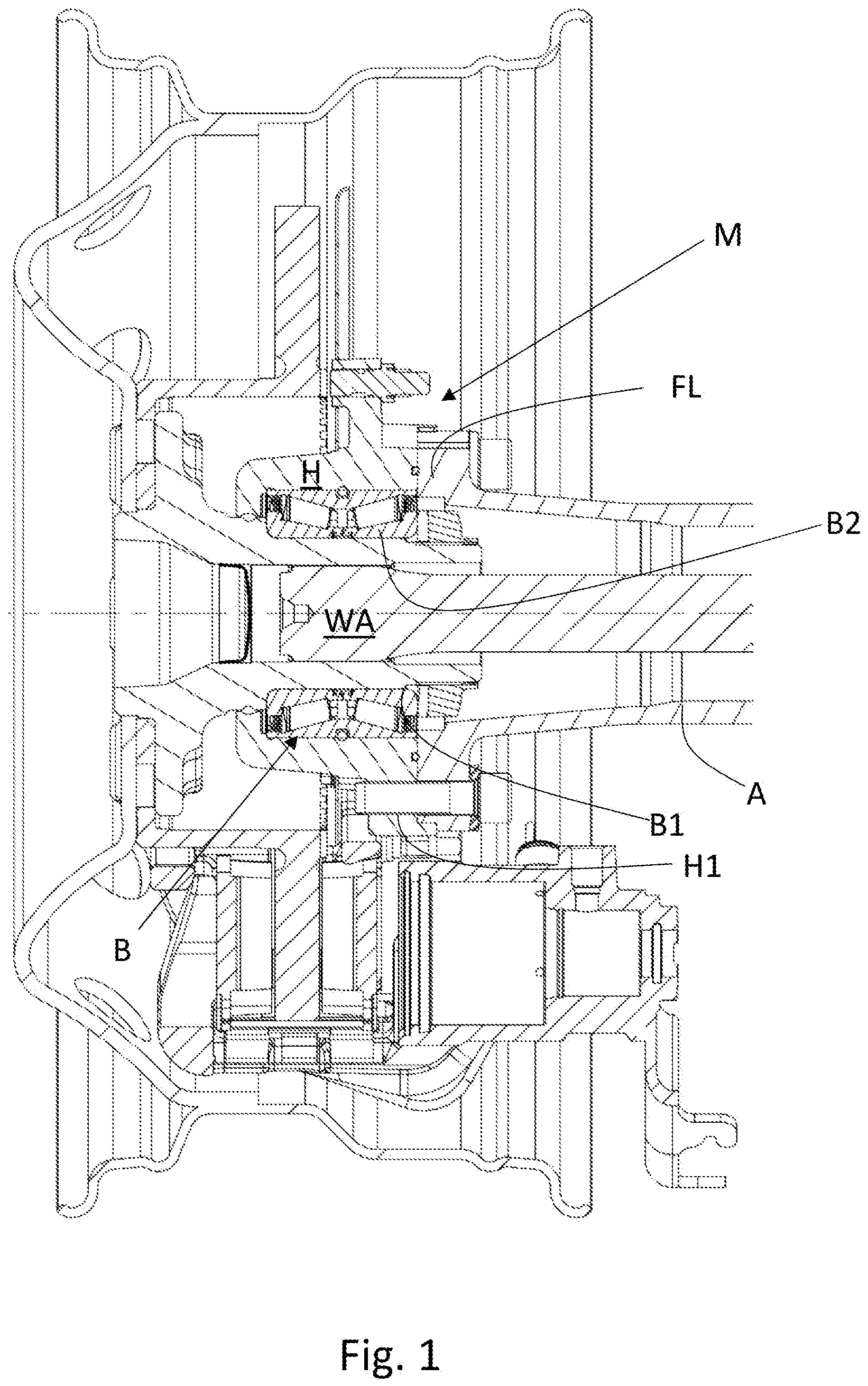 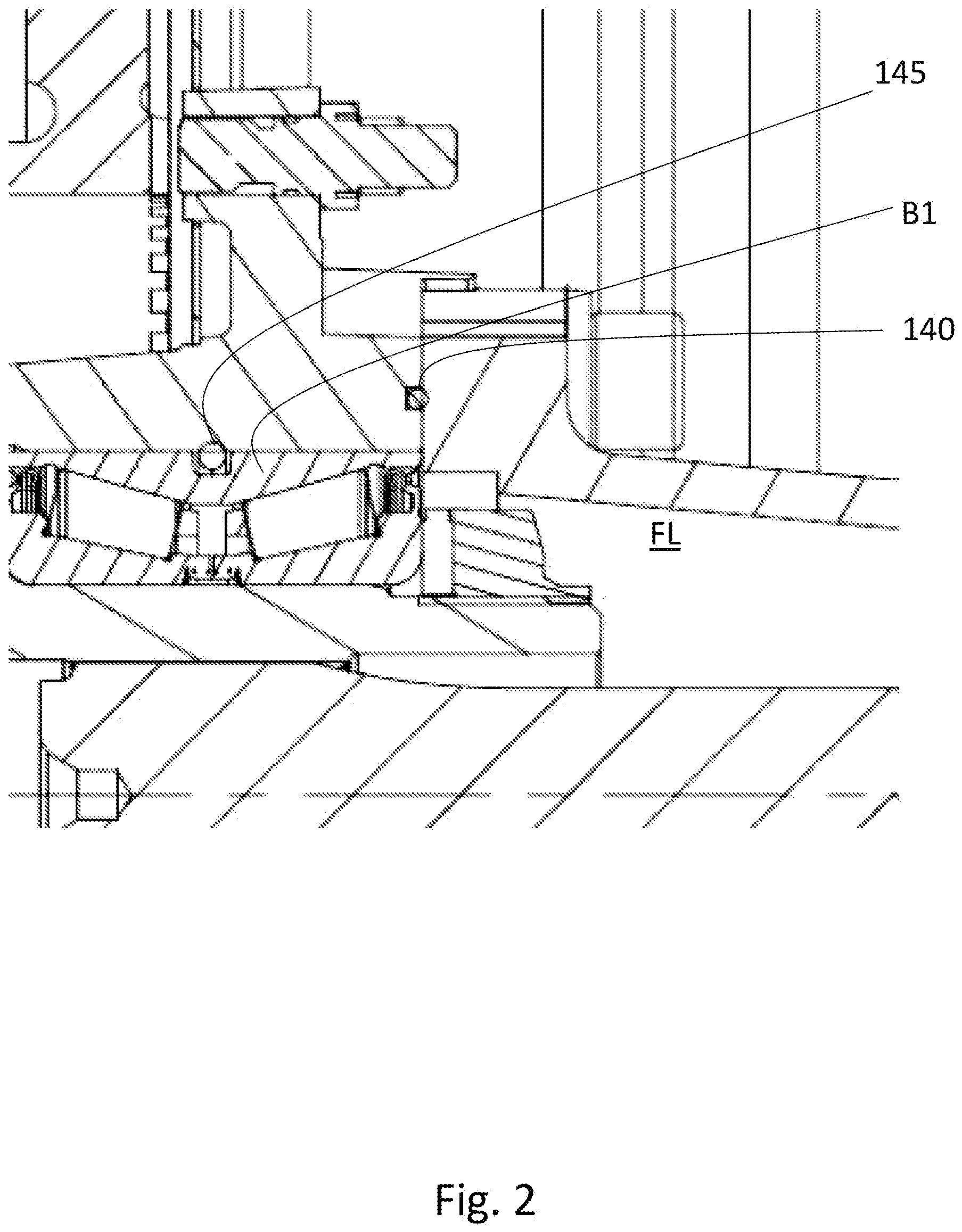 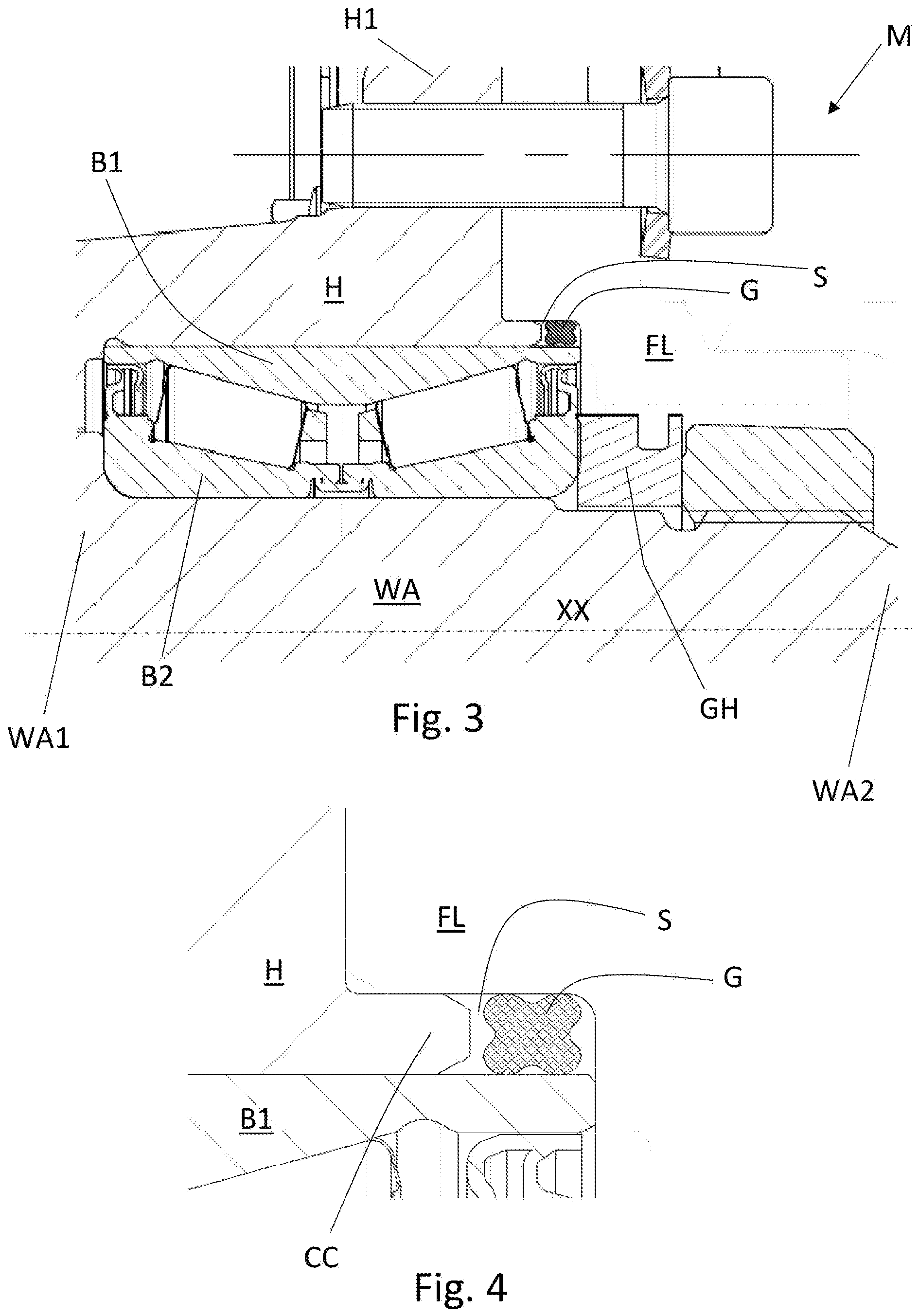