[0002] The application generally relates to a semi-hermetic compressor motor for use with ammonia refrigerant. The application relates more specifically to a semi-hermetic compressor motor having copper field windings, for use with ammonia refrigerant.
[0003] Ammonia is a common, naturally occurring compound in the environment that breaks down naturally into hydrogen and nitrogen. Ammonia refrigeration is a cost effective and energy efficient method of processing and storing frozen and unfrozen foods. Ammonia refrigeration is also used in the chemical industry. Air conditioning has been provided by ammonia refrigeration systems in office buildings, parks, and small buildings such as convenience stores.
[0004] Ammonia is electrically conductive under some conditions, and corrosive to many materials, e.g., copper wire used in high efficiency electric motors. Electrical connections, e.g., motor terminations of multiple conductors, which are exposed to ammonia in the environment, can present a risk of short circuit or other failure. Electrical conductors must be electrically insulated and sealed from ammonia vapor or liquid.
[0005] Semi-hermetic motors are not widely used in refrigeration or HVAC applications where ammonia is the refrigerant because the winding insulation and the ammonia refrigerant are incompatible. In the past it was believed that copper and other yellow metals used in manufacturing motor windings could not be used in an ammonia refrigerant system because such metals would be corroded by the refrigerant in the presence of water. Document GB 1 468 808 A discloses a semi-hermetic compressor comprising a compressor portion and a motor, the compressor portion being configured to compress a working fluid, the motor comprising a plurality of stator windings, wherein a plurality of motor leads are connected to the stator windings, and wherein the plurality of motor leads extend from an interior of a housing portion to an exterior of the housing portion.
[0006] Aluminum wire has been used in some motors employed to reduce problems associated with potential exposure to ammonia. Aluminum wire is used, for example, in shipboard applications, as aluminum is more corrosion resistant in the presence of ammonia and water. Aluminum wire results in reduced motor efficiency due to the higher resistance of aluminum wire than that of copper wire. Because of the electrical conductivity of ammonia, there can be no exposure of metal conductors to the gas stream. To avoid electrical faults, in some instances the motor stator may be encased with a sealed enclosure, or the motor windings encapsulated. These isolation measures reduce the benefit of a semi-hermetic motor as the heat dissipation capacity of the windings is reduced, and external cooling may be required, or the size of the motor increased. Either method results in reduced heat dissipation and correspondingly higher motor winding temperatures. Current semi-hermetic motors using aluminum windings experience a loss in efficiency of about 4% to 5%.
[0007] Intended advantages of the disclosed systems and/or methods satisfy one or more of these needs or provide other advantageous features. Other features and advantages will be made apparent from the present specification. The teachings disclosed extend to those embodiments that fall within the scope of the claims, regardless of whether they accomplish one or more of the aforementioned needs.

FIG. 2 shows an enlarged cross-sectional partial detail of the semi-hermetic compressor indicated by section B in FIG. 1.

DETAILED DESCRIPTION OF THE EXEMPLARY EMBODIMENTS

2. The compressor of claim 1, wherein:

- the first isolation portion (26) is configured to fit within an annular opening in the base portion (28); or

4. The system of claim 1,
wherein the plurality of insulated copper wires (22) that extends from the stator (20) of the motor (12) through the pass-through assembly (30) further extend into the first isolation portion (26) disposed within the base portion (28).

5. The compressor of claim 1, wherein
the base portion (28) is removably securable to the housing portion (16) by a threaded attachment or a quick-disconnect fitting.

7. The compressor of claim 6,
wherein the cap portion (40) is configured to mate with the external connector portion (35) by a threaded attachment or a quick-disconnect fitting. 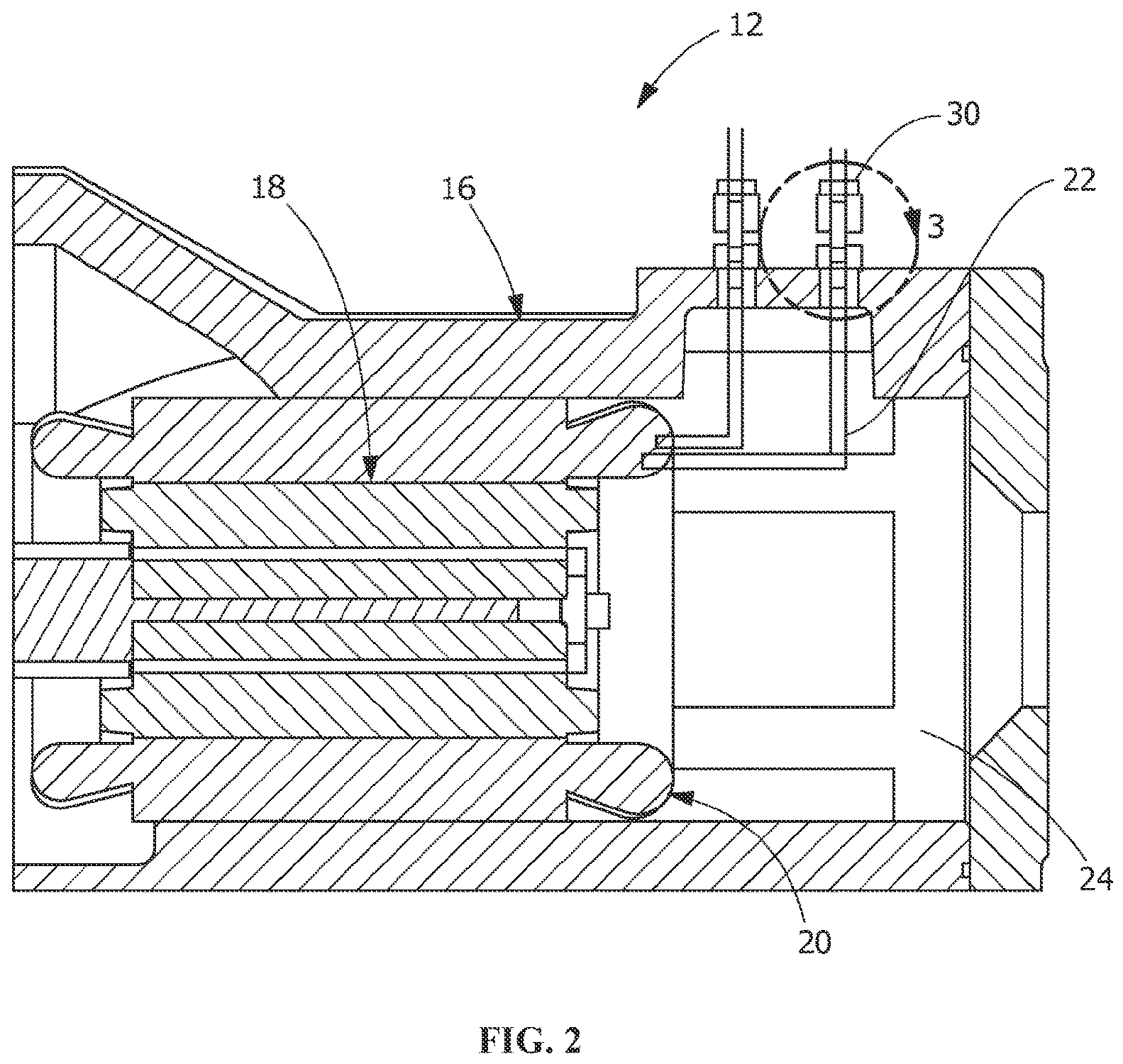