Technical field and prior art

[0001] The present invention relates to a process for producing a chewing-gum pellet, in particular to a process of the type comprising a step of granulation of the gum to obtain granules of small size, with a diameter of less than 1 cm.
[0002] The document No. EP 1 395 123 B1 describes a process for producing miniaturized gum-ball centres that themselves constitute the finished product, either in the same form as they are directly obtained from the granulation process or, in any case, after they have been simply coated through an enrobing, or panning, process.
[0003] The document No. EP 20 22 336 B1 describes, instead, a process for producing compressed chewing-gum tablets, which envisages obtaining, first, gum granules through a granulation process of the type in question and then pressing the granules obtained inside a mould, possibly together with further ingredients, to form the tablet.
[0004] The processes illustrated in the above documents envisage a process of granulation of the gum that is carried out in water. Water operates as fluid for cooling the granules that have just been formed and moreover as carrier for conveying them on to the subsequent stages of the production process.
[0005] In regard to the granulation process described above, the present applicant has identified a series of drawbacks. In the first place, water leads to dispersion of the soluble substances contained in the formulation of the gum, hence altering the organoleptic properties of the end product. The solutions adopted in the art for compensating for this reaction complicate the process and raise the production costs. Furthermore, this type of granulation process entails a large consumption of water and also of energy since the water must be filtered and conditioned thermally before it can be used. Also these aspects markedly affect the production costs. Re-use of the water used previously in the process - which, for this purpose, must be taken from the discharge ducts of the system, treated through various batteries of filters, again conditioned, and finally re-introduced into the cooling circuit - constitutes only a partial solution to the above problems in so far as the number of times that the same water can be re-used is in any case limited, and among other things for this purpose the system must be prearranged with a complex water-treatment system, and hence a lot of energy is consumed for operation of the aforesaid system.
[0006] US2006/257524A1 and US2004/170721 describe solutions of prior art representing certain technical background.

Aim and subject of the invention

[0007] The present applicant has now identified a process for producing chewing-gum pellets that uses a granulation process that is free from the aforesaid drawbacks.
[0008] The process according to the invention presents the characteristics recalled in the ensuing claims.
[0009] The claims form an integral part of the technical teaching provided herein in relation to the invention.

1. A process for producing a chewing-gum pellet, comprising the steps of:

- mixing gum base with one or more sweetening substances;

- putting the mix obtained inside an extruder, where said mix is heated;

- extruding said mix through the die plate of the extruder, this being provided with a plurality of openings with a diameter of less than 1.5 mm;

- cutting with a knife the strands of mix coming out of the extruder, within a cutting chamber that is traversed by a flow of gas in the cryogenic state, so as to produce granules of chewing gum that have a diameter of less than 2 mm, which are immediately cooled within said cutting chamber and carried away from said chamber, by said flow of gas; and 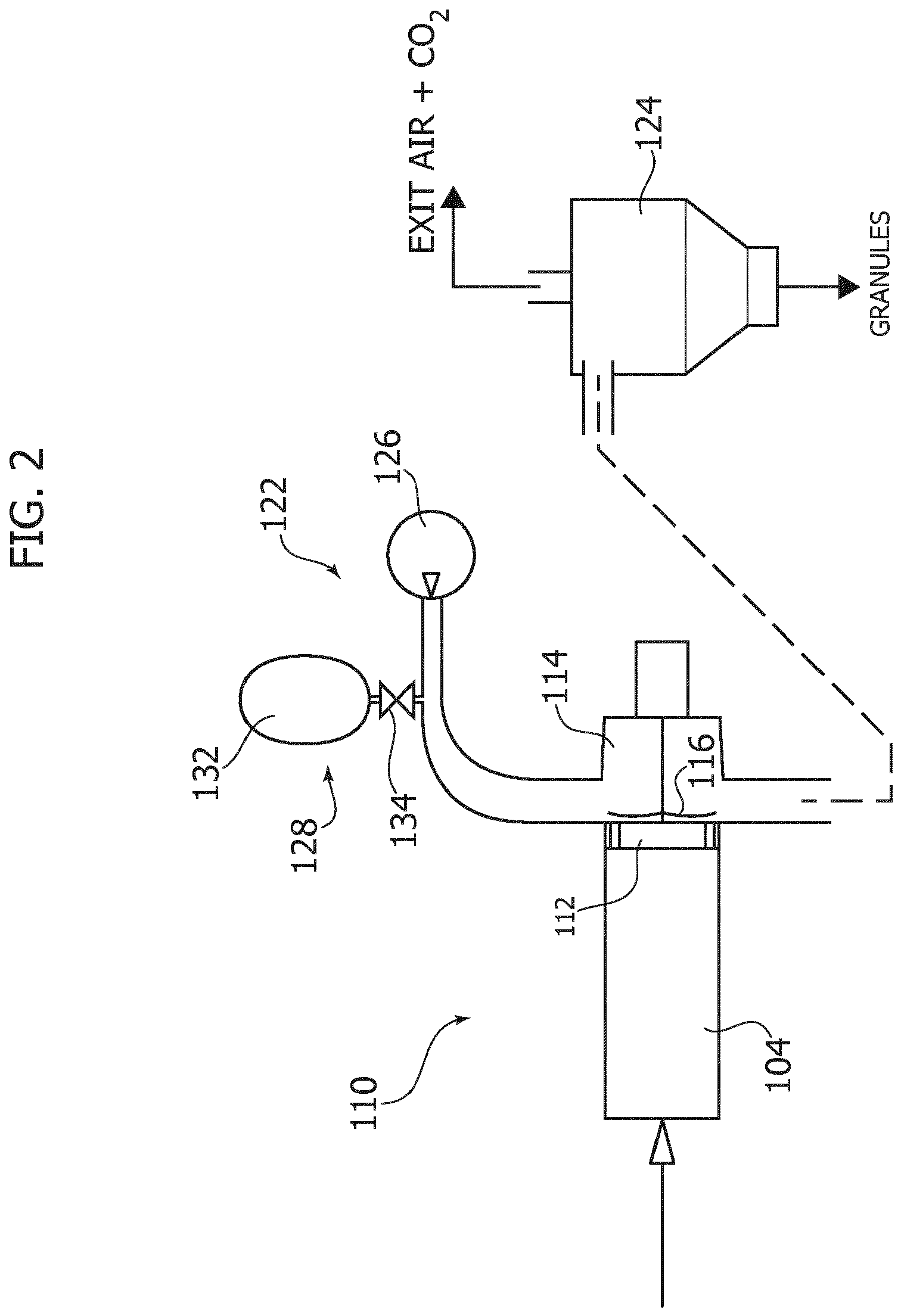 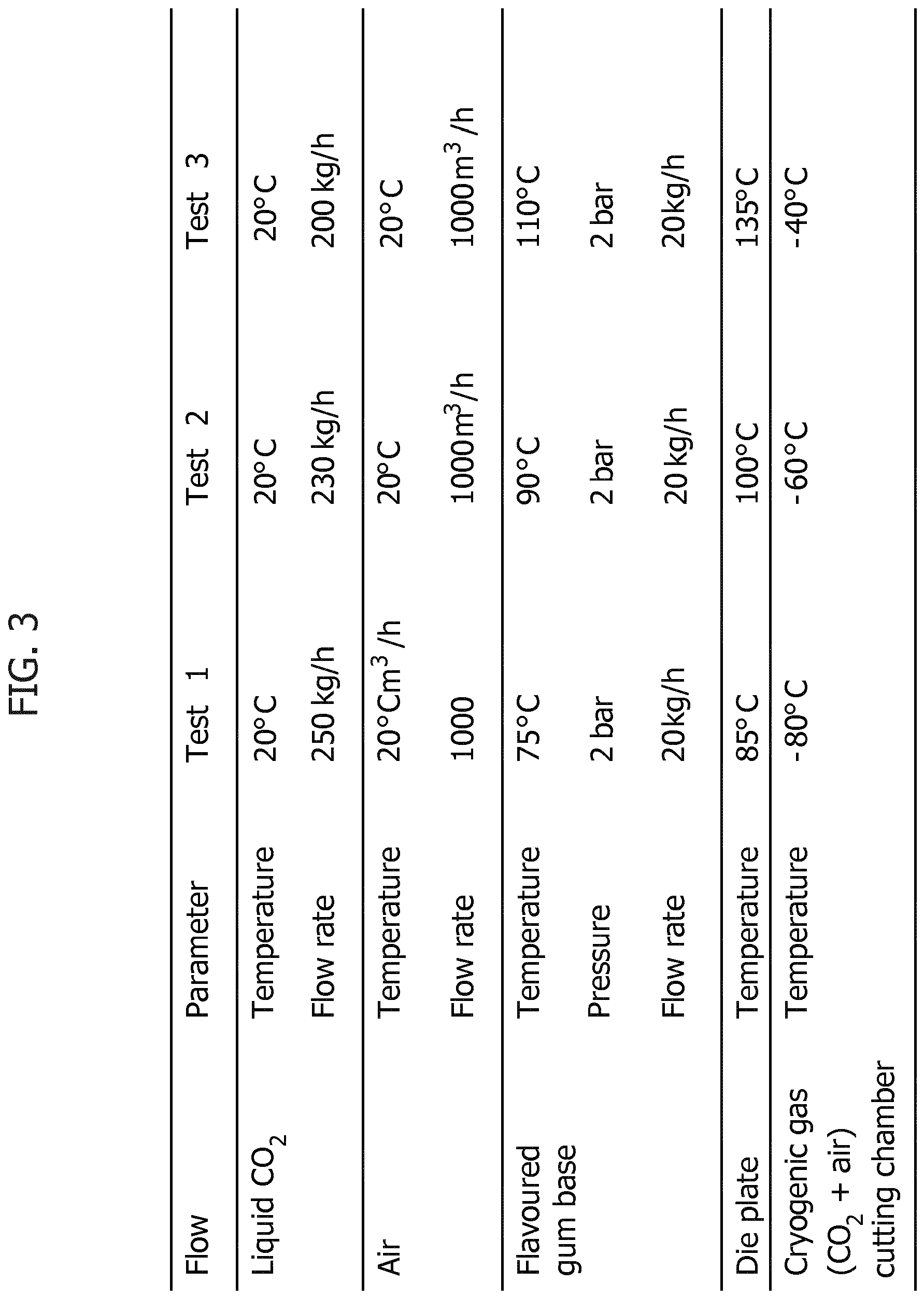