Technical Background of the invention

Objects of the Invention

1) binding of the first amino acid to a solid support; the preferred binding to the solid support will be by the α-carboxylic group of the amino acid;

2b) sequential addition of amino acids following the second one: the α-carboxylic group of each amino acid forms a covalent bond with the α-amino group of the preceding amino acid;

3) detachment of the synthesized peptide from the solid support.

[0061] The synthetic peptide NHK1 of the present invention, with sequence NH2-IAAQLLAYYFT-COOH (SEQ. ID NO. 1), or Isoleucine-Alanine-Alanine-Glutamine-Leucine-Leucine-Alanine-Tyrosine-Tyrosine-Phenylalanine-Threonine, molecular weight 1,273.42, pI = 5,50, has been synthesized by the standard chemical method of solid phase peptide synthesis (SPPS) in an automated synthesizer. At a variance from the natural synthesis in ribosome, the SPPS synthesizes the peptide in the direction from the C-terminus towards the N-terminus. Therefore, the synthesis of NHK1 peptide occurs from the C-terminal amino acid Threonine (Thr or T) towards the N-terminal amino acid Isoleucine (Ile or I). The N-terminal of each amino acid to be added in the sequence is protected by the 9-Fluorenylmethyloxycarbonyl group (Fmoc). The peptide bond is formed between the N-terminal amino group of the peptide immobilized through its C-terminus to the solid phase (an insoluble resin) and the entering amino acid, whose N-terminal is protected by a Fmoc group. In the next step the Fmoc group is cleaved and the amino acid is deprotected and the new N-terminus becomes available for binding a new amino acid. For this reason, after each reaction, many washing steps with appropriate solvents are performed, aiming to completely remove reagents from the liquid phase and bioproducts of the coupling phase, while the growing peptide is covalently bound to the insoluble resin.
[0062] The SPPS is thus a cyclic process of repeated reactions in which: the amino acid bound to the growing peptide is deprotected - washing steps - addition and reaction of the entering (next) amino acid with the deprotected amino acid and elongation of the growing peptide by the new amino acid - washing steps.
[0063] These were the technical steps of SPPS synthesis of said peptide NHK1:
[0064] Steps ii) to iv) are repeated as a cycle for each new amino acid introduced in the sequence. Steps v) and vi) are the final steps of the peptide synthesis, performed once the desired sequence is accomplished.
[0065] Step iii) neutralization of amino groups is carried on with triethylamine, preferably. Neutralization of amino group transforms the protonated amine in a free amine, thus nucleophile, and able to attack the symmetric anhydride in the next reaction (step iv). In this way the synthetic peptide named NHK1, object of the present invention, with the sequence IAAQLLAYYFT (SEQ. Id NO. 1) was obtained.

[0066] The said peptide NHK1, object of the present invention, with the sequence IAAQLLAYYFT (SEQ. ID NO. 1) was produced by expressing a plasmidic vector comprising the nucleotide sequence 5'-ATCGCCGCGCAGCTCCTGGCCTATTACTTCACGTGA-3' SEQ ID NO. 2) under the control of an eukaryotic promoter, in stable cell lines (in particular the stable cell lines HeLa and NSC-34).
[0067] In the first step two complementary oligonucleotides with the following sequences have been chemically synthesized:

[0068] The oligonucleotides contain sequences compatible with restriction sites NdeI and SalI (underscored). The annealing between these two oligonucleotide sequences yielded a double strand DNA (dsDNA-NHK1) containing the sequence coding for the peptide NHK1 of the present invention, flanked by single strand sequences corresponding, respectively, to those obtained upon digestion of restriction sites NdeI and SalI.
[0069] Next, the sequence dsDNA-NHK1 was cloned in a plasmidic expression vector for eukaryotic cells pCMSmtRed, a modified pCMS-eGFP (Clontech), whose eGFP transfection marker was substituted with the Red Fluorescent Protein (RFP) sequence from Discosoma spp fused after the mitochondrial targeting sequence obtained from human Cytochrome c oxidase subunit VIII gene; this sequence expresses the fluorescent protein to the mitochondria and is a transfection marker [Tomasello F. et al., The voltage-dependent anion selective channel 1 (VDAC1) topography in the mitochondrial outer membrane as detected in intact cell. PLoS One 2013; 8:e81522.]. This construct has been named pCMSmtRed-NHK1.
[0070] In addition, a further version of the said peptide NHK1 object of the invention, carrying fused at its C-terminus the HemoAgglutinin sequence (HA-tag) (NHK1-HA) was produced. The HA sequence used as a tag, corresponds to the amino acid sequence 98-106 of the influenza virus HemoAgglutinin, a glycoprotein located on the virus surface and required for the viral infection. The nucleotide sequence of HA-tag is the following: 5'-TACCCATACGATGTTCCAGATTACGCT-3' SEQ ID NO. 5); the corresponding amino acid sequence is the following: YPYDVPDYA SEQ ID NO. 6) (the amino acid sequence is in direction from the N-terminus (residue Y) towards the C-terminus (residue A)). It is well established that the addition of HA tag does not produce any interference with the activity or the targeting of the protein to which it is fused.
[0071] To provide the fusion protein NHK1-HA, a second pair of complementary oligonucleotides corresponding to the dsDNA coding the sequence NHK1 fused at its C-terminus with the sequence HA was synthesized. This dsDNA contain restriction sites NdeI and SalI, respectively, one at each extremity:

[0072] The oligonucleotides contain sequences compatible with restriction sites NdeI and SalI (underscored) and the sequence coding for HA tag (bold).
[0073] The annealing between these two oligonucleotide sequences yielded a double strand DNA (dsDNA-NHK1-HA). The sequence dsDNA-NHK1-HA was cloned at restriction sites NdeI and SalI of the plasmidic expression vector pCMS-mtDsRed and this construct was named pCMS-mtDsRed-NHK1-HA.
[0074] The action of the said NHK1 peptide upon the complex VDAC1/SOD1-G93A, i.e. the complex formed by the interaction between protein VDAC1 and the mutant enzyme SOD1 (exactly the mutant G93A, where the glycine 93 was replaced by alanine) was evaluated by in vitro and in cellulo experiments, i.e. in the NSC34 cell line. NSC34 is a hybrid cell line obtained by fusing mice motor neurons with neuroblastoma cells. The NSC34 cell line is widely recognized as cell model of motor neurons and, following its transfection with mutated SOD1, it is considered a reference model of ALS [Cashman NR et al. Neuroblastoma x spinal cord (NSC) hybrid cell lines resemble developing motor neurons. Dev. Dyn. (1992) 194:209-21; Durham HD et al., Evaluation of the spinal cord neuron X neuroblastoma hybrid cell line NSC-34 as a model for neurotoxicity testing. Neurotoxicology (1993) 14:387-395.].

[0075] In in vitro experiments, the action of the peptide NHK1 has been directly assayed in test tubes against the complex VDAC1/SOD1-G93A formed by the interaction of recombinant and purified proteins. The human proteins VDAC1, SOD1-G93A and SOD1WT were preliminarily produced and purified. Human SOD1 (both mutant and wt) and human VDAC1 were expressed in Escherichia coli BL21 (DE3) fused at the C-terminus with the Strep-tag (SOD1-G93A and SOD1WT) or His-tag (VDAC1). Human SOD1 (both mutant SOD1 and SOD1WT, Gene ID: 6647) were first expressed cloned in pET52b(+) vector, producing the constructs pET-SOD1WT and pET-SOD1G93A. In the same way, the human VDAC1 sequence (Gene ID: 7461) was cloned in pET21a(+) vector, producing the construct pET-VDAC1. SOD1-G93A and SOD1WT were purified by affinity chromatography with Strep-Tactin resin (Qiagen) and VDAC1 was purified by affinity chromatography with Ni-NTA resin (Qiagen).
[0076] Both purification procedures were performed following the manufacturers' protocols (Qiagen).
[0077] Purified VDAC1, a membrane protein, was refolded in a buffer solution containing 1% Lauryl-dimethyl-amine-N-Oxide (LDAO). The correct folding of recombinant VDAC1 was checked by electrophysiological characterization of its pore-forming features in a planar lipid bilayer (PLB) [Checchetto V. et al., Recombinant human Voltage Dependent Anion selective Channel isoform 3 (hVDAC3) forms pores with a very small conductance. Cell Physiol Biochem (2014) 34(3): 842-853.]. The experimental conditions in the PLB assay were as follows: membrane composition: diphytanoyl-phosphatidylcholine/n-decane; the membrane was bathed from both sides with 1 M KC1 in water; the potential applied to the membrane was 10 mV; constant T=25°C.
[0078] In these in vitro experiments the interference action of the synthetic peptide NHK1 on the complex VDAC1/SOD1-G93A was evaluated.

[0079] The ability of SOD1-G93A and SOD1WT to bind VDAC1 was assayed in the following experimental conditions: 30 µM purified and refolded VDAC1, in its native conformation, were incubated with 50 µL of paramagnetic micro-beads coated with a Ni-NTA resin (nickel-nitrilotriacetic acid) from Qiagen. The resin specifically binds the 6XHis-tag located at the C-terminus of VDAC1, coating the beads with the VDAC1 protein itself. VDAC1 bound to the paramagnetic beads interacts with significant affinity with purified human SOD1-G93A, added to the VDAC1-coated micro-beads at a concentration 6.5 µM. In the same conditions there is no binding of SOD1WT to the VDAC1-coated micro-beads (Figure 1).
[0080] This result is in agreement with the literature, i.e. the specific ability of the mutant SOD1, but not of the SOD1 WT, to interact with VDAC1 (in vivo) [Israelson A. et al., Misfolded Mutant SOD1 Directly Inhibits VDAC1 Conductance in a Mouse Model of Inherited ALS. Neuron (2010) August 26; 67(4):575-587].

Experiment 4 - The action of synthetic peptide NHK1 against the complex VDAC1/SOD1-G93A.

[0083] In a single channel experiment of VDAC1 conductance recording, the pore-forming activity of VDAC1 was observed before and after the addition in the cuvette cis of the synthetic peptide NHK1 (Ben-Hail D, Shoshan-Barmatz V. Reconstitution of purified VDAC1 into a lipid bilayer and recording of channel conductance. Cold Spring Harb Protoc. 2014 Jan 1;2014(1):100-5. doi: 10.1101/pdb.prot073148. PubMed PMID: 24371316).
[0084] Figure 3 shows a representative trace of VDAC1 conductance in 1 M KCl at a constant applied voltage +25 mV, before and after the addition of the synthetic peptide NHK1. At the applied voltage, the VDAC1 channel is present in the so-called (partially) "closed" state, as defined in the literature. Following the addition of 15 µM synthetic peptide NHK1, the closed state was destabilized, showing fast fluctuations that range from reaching higher conductance levels and several different closed states.

[0086] The peptide NHK1 was synthesized modified by the labelling of its N-terminal amino group with a biotin. Following internalization of biotinylated peptide into NSC34-G93A cell driven by the transfection reagent Chariot (Active Motif), the localization of the biotinylated NHK1 peptide was visualized at the fluorescence microscope after the specific interaction of biotin with streptavidin labelled with the fluorescent probe Alexa594 (Molecular Probes-Thermo scientific). In this experiment, 6 µL of the not cytotoxic transfection reagent Chariot were used to allow the uptake in the cell of the biotinylated synthetic peptide (100-400 ng peptide/per well) Chariot is a 2,843 da peptide able to form non covalent complexes with proteins or peptides: in this way it protects the peptide to be uptaken from degradative processes during the transfection process. Once inside the cell, the Chariot-peptide complex dissociates and the peptide can reach its target destination. The uptake is independent from the endosomal pathway, thus the peptide structure is not modified during the internalization.

Chariot experiment was carried out according to the manufacturer's instructions. Experiment 6b - synthetic peptide NHK1 labelled with fluorescein isothiocyanate (FITC).

[0087] The peptide NHK1 was synthesized modified by the labelling of its N-terminal amino group with the fluorescent probe Fluorescein isothiocyanate (FITC). Following internalization of the modified peptide into NSC34-G93A cell driven by the transfection reagent Chariot (Active Motif), the localization of the NHK1-FITC peptide was directly visualized at the fluorescence microscope.
[0088] In experiment 6a the cellular localization of the peptide NHK1 was obtained by indirect immunofluorescence. In experiment 6b the visualization was obtained by direct immunofluorescence, since FITC is a fluorescent molecule.
[0089] Experiments 6a and 6b resulted in overlapping patterns of results: images were acquired by an epifluorescence microscope (Leica DM6000) and showed that both NHK1 peptides (labelled with biotin or with FITC), clearly localized to mitochondria (data not shown in Figures).

Experiment 7 - The synthetic peptide NHK1 obstructs the formation of the complex VDAC1/SOD1-G93A in vitro.

Experiment 8 - The action of synthetic peptide NHK1 in cellulo.

<120> PHARMACOLOGICALLY ACTIVE PEPTIDE COMPOUND, PROCESS FOR THE
PREPARATION AND USE THEREOF

<220>
<223> oligonucletide for the production of a plasmid. The sequence is indicated in direction 3'-5'

<220>
<223> oligonucletide for the production of a plasmid. The sequence is indicated in direction 3'-5' 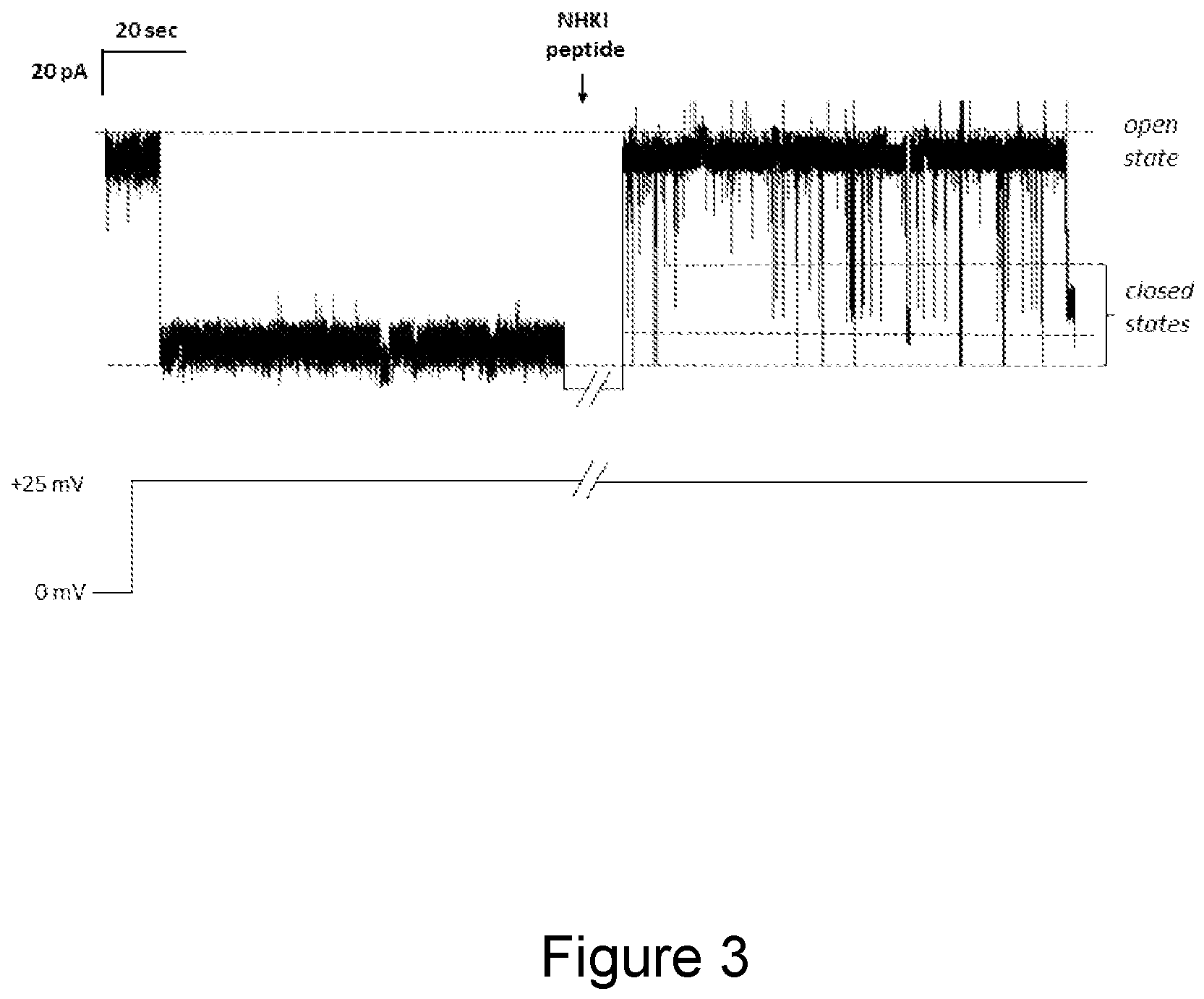