[0001] CMOS cameras typically form an image of a scene by imaging light from the scene onto an array of pixel sensors. Typically, each pixel sensor has one or more photodetectors. Each photodetector converts the light received during an exposure period into an electrical signal. The electrical signal is then digitized by an analog-to-digital converter (ADC) to generate a digital value representing the amount of light received during the exposure time period. The array is typically a two-dimensional array having thousands of columns and rows of pixels. The array is readout one row at a time using a separate column amplifier and ADC for each row.
[0002] Document US 2011/0292264 describes a CMOS image sensor adapted to suppress vertical fixed-pattern noise due to the shift of the black level. It solves the problem by providing a limiting unit for each of the column signal lines, configured to limit the voltage of the pixel signal to a clipping voltage, wherein the limiting unit is switched on when the voltage of the pixel signal is lower than the reference voltage and switched off when the voltage of the pixel signal is higher than or equal to the reference voltage.
[0003] In general, a photodiode has some range in which the signal from the photodiode is a monotonically increasing function of the light received in the exposure period. At the bottom of this range, the accuracy of the determination of the light intensity from the generated signal is limited by various sources of noise. Above this range, the output of the photodiode saturates, and hence, intensities above this range cannot be accurately measured. With current photodiodes, the range of usable signals is less than that needed to measure all of the intensities in many images. If the exposure is set to detect low level light signals, the bright regions of the image will be outside the range, and hence, saturated.
[0004] Prior art solutions for extending the high range of a pixel sensor typically utilize a second exposure or a second photodiode. In such schemes, the first exposure or photodiode is set to detect low light pixels. Pixel sensors that are subjected to high light intensities saturate, and hence, cannot provide useful information about the light intensity in those high light intensity regions of the image. A second measurement is made in a manner that captures the high light intensity regions at the expense of the low light intensity regions. The second measurement can be a second photodiode in the pixel sensor that has a much lower light sensitivity or a second, shorter exposure, using the same photodiode. The latter solution is not preferred in motion picture systems, as the time difference in the two exposures can lead to motion artifacts. The two-photodiode solution has the disadvantage of requiring larger pixel sensors. However, recent developments in photodiodes have provided a second low sensitivity photodiode within a conventional photodiode without significantly increasing the size of the pixel sensor.
[0005] While providing a second photodiode in each pixel sensor extends the high intensity response of a pixel sensor, various noise sources limit the extent to which the low light regions can be imaged at reasonable exposure times. While shot noise represents the minimum noise floor that can be obtained, other sources of noise are still significant, and hence, need to be reduced to further increase the dynamic range of an image sensor.

Figure 1 illustrates a two-dimensional imaging array according to one embodiment of the present invention.

Figure 3 illustrates a pixel sensor in which the parasitic photodiode is utilized in an image measurement.

Figure 4 illustrates a column amplifier and ADC according to one embodiment of the present invention.

Figure 5 illustrates a signal injector that is readout on a readout line 83 in response to a row select signal on line 197. 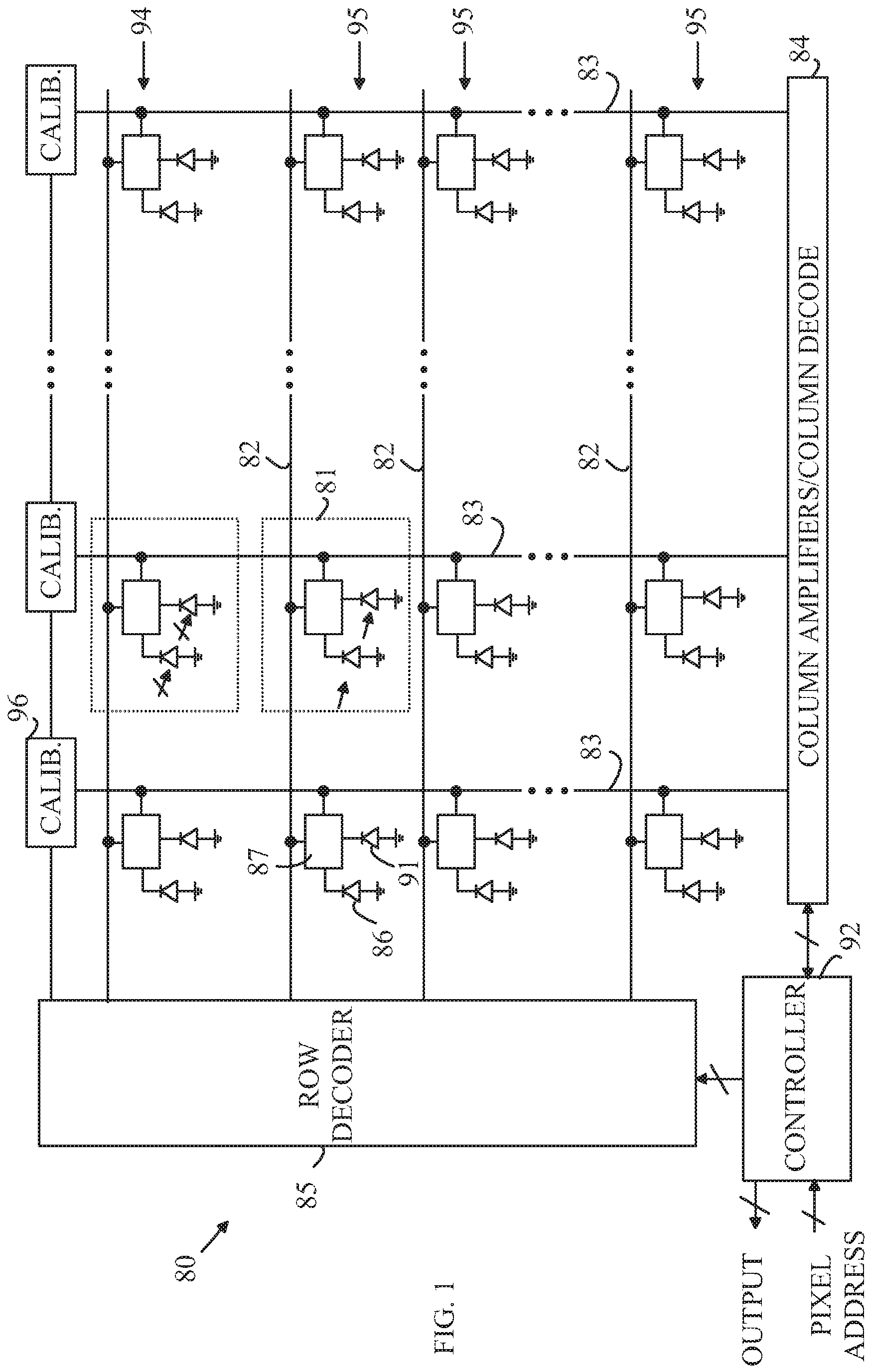 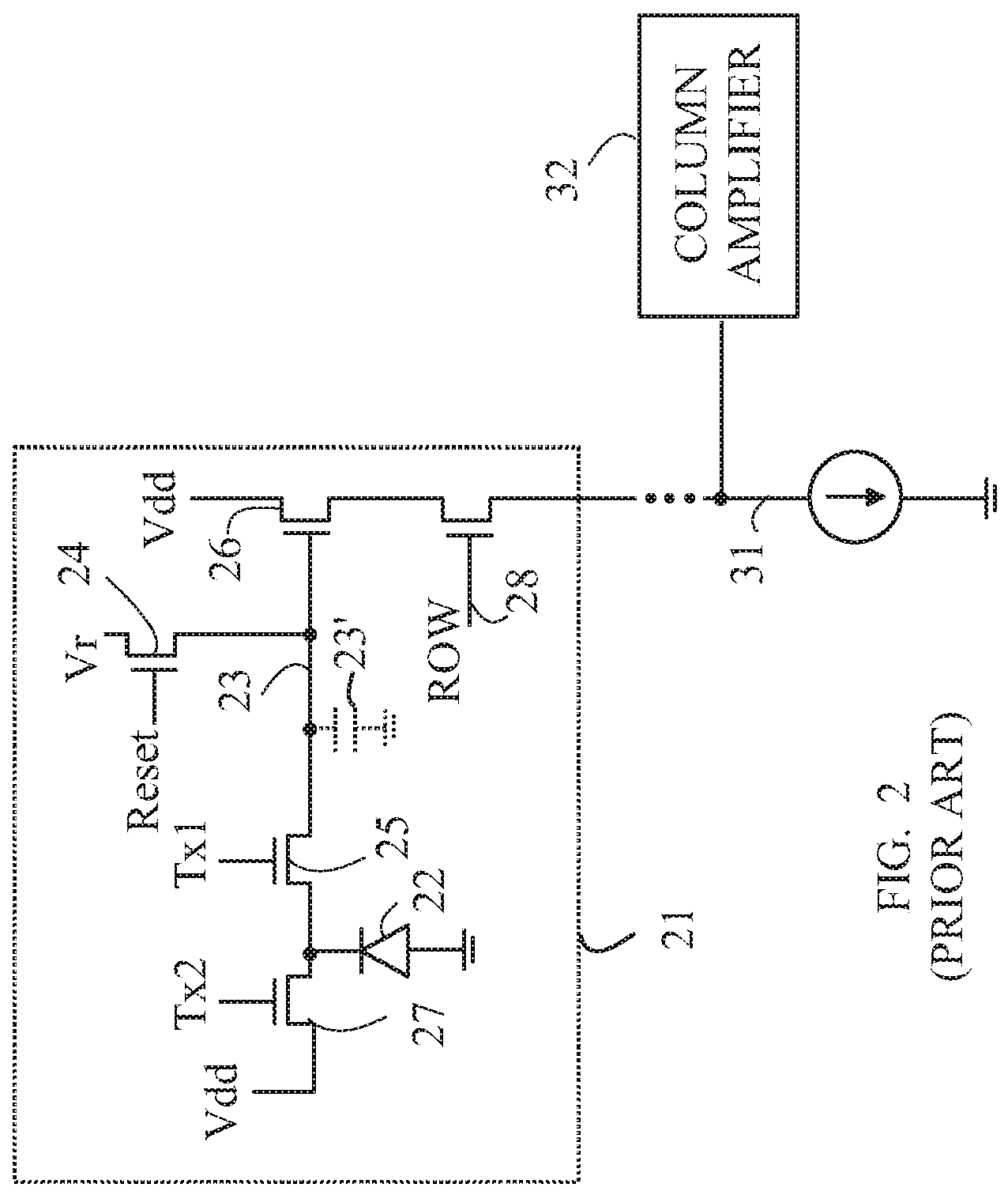 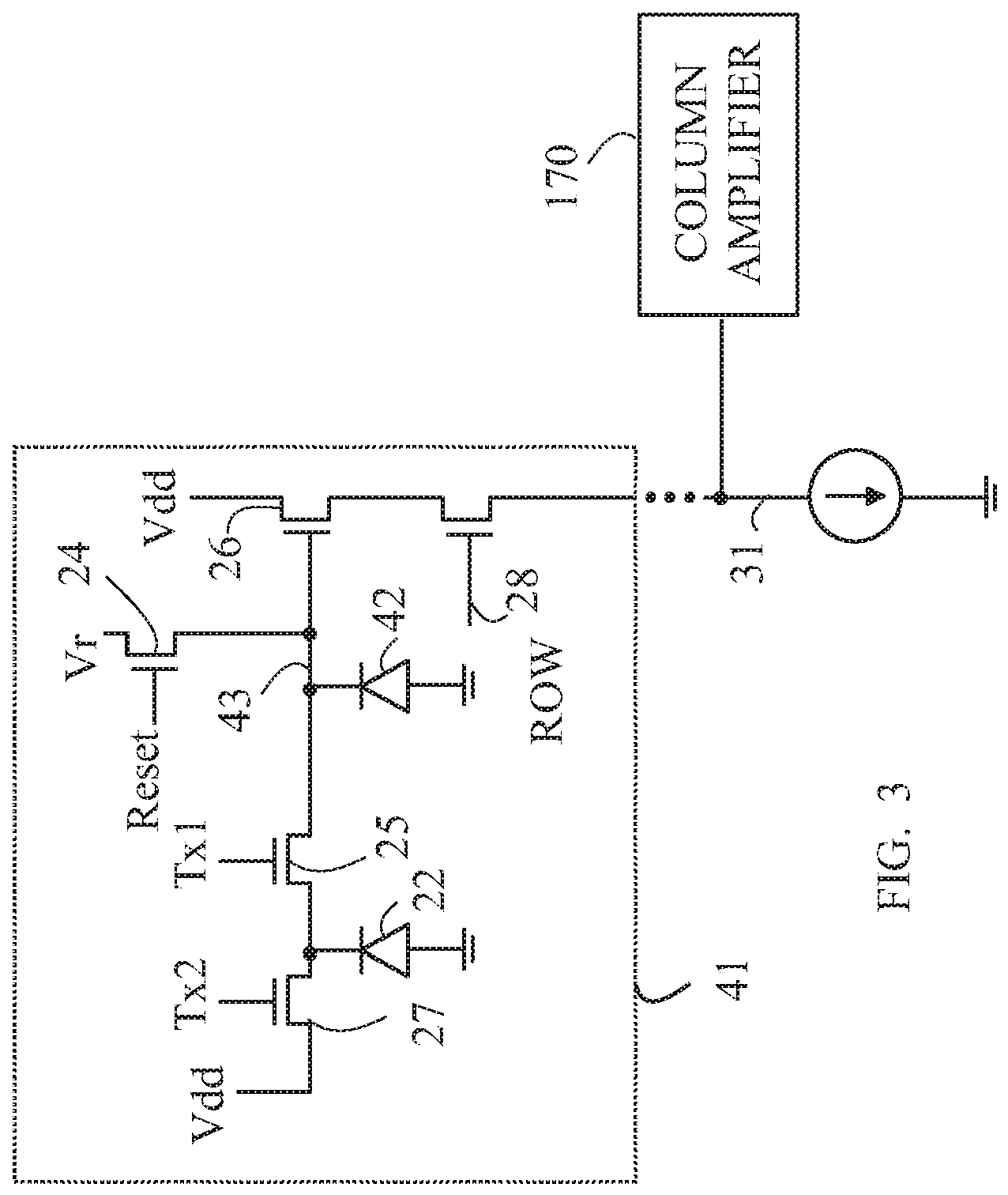 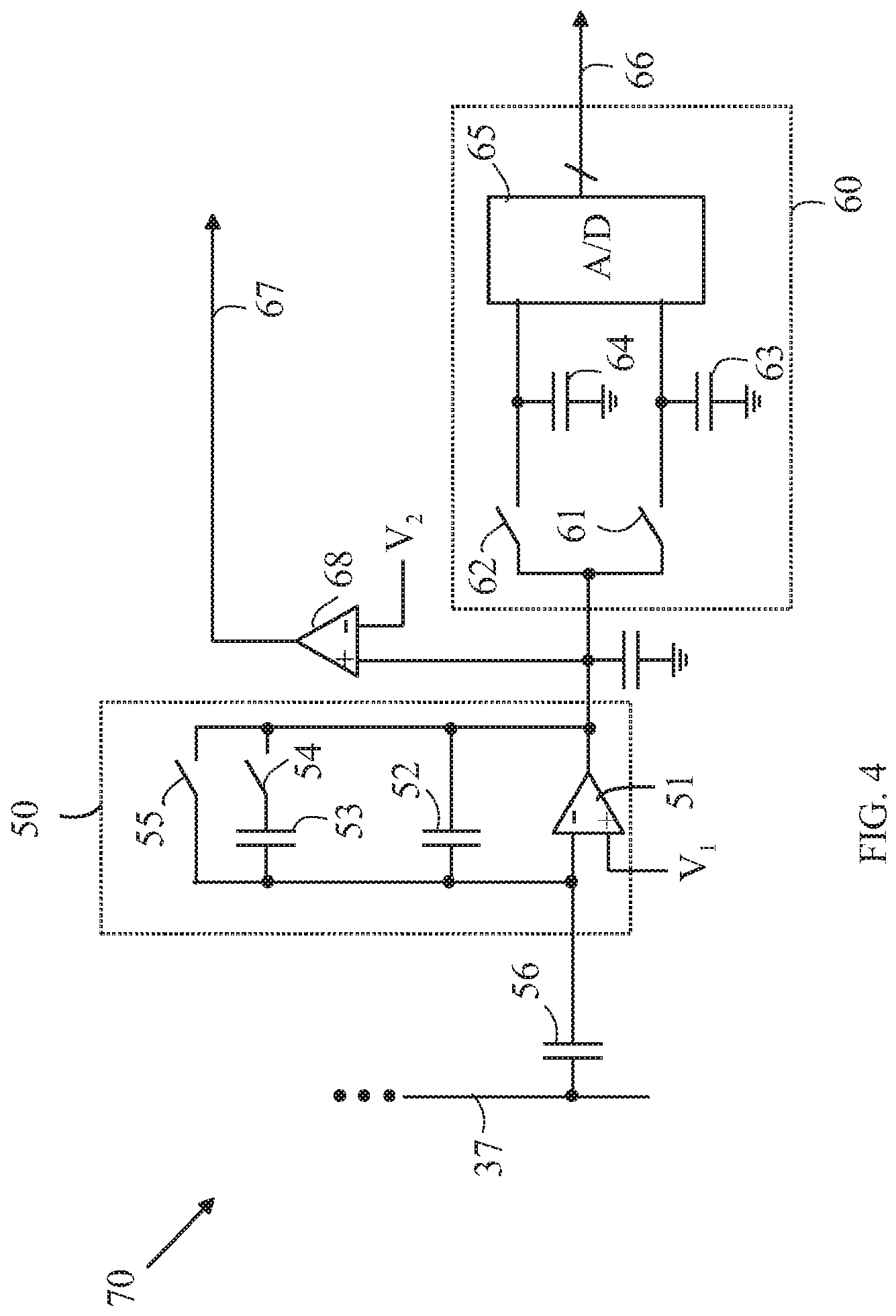 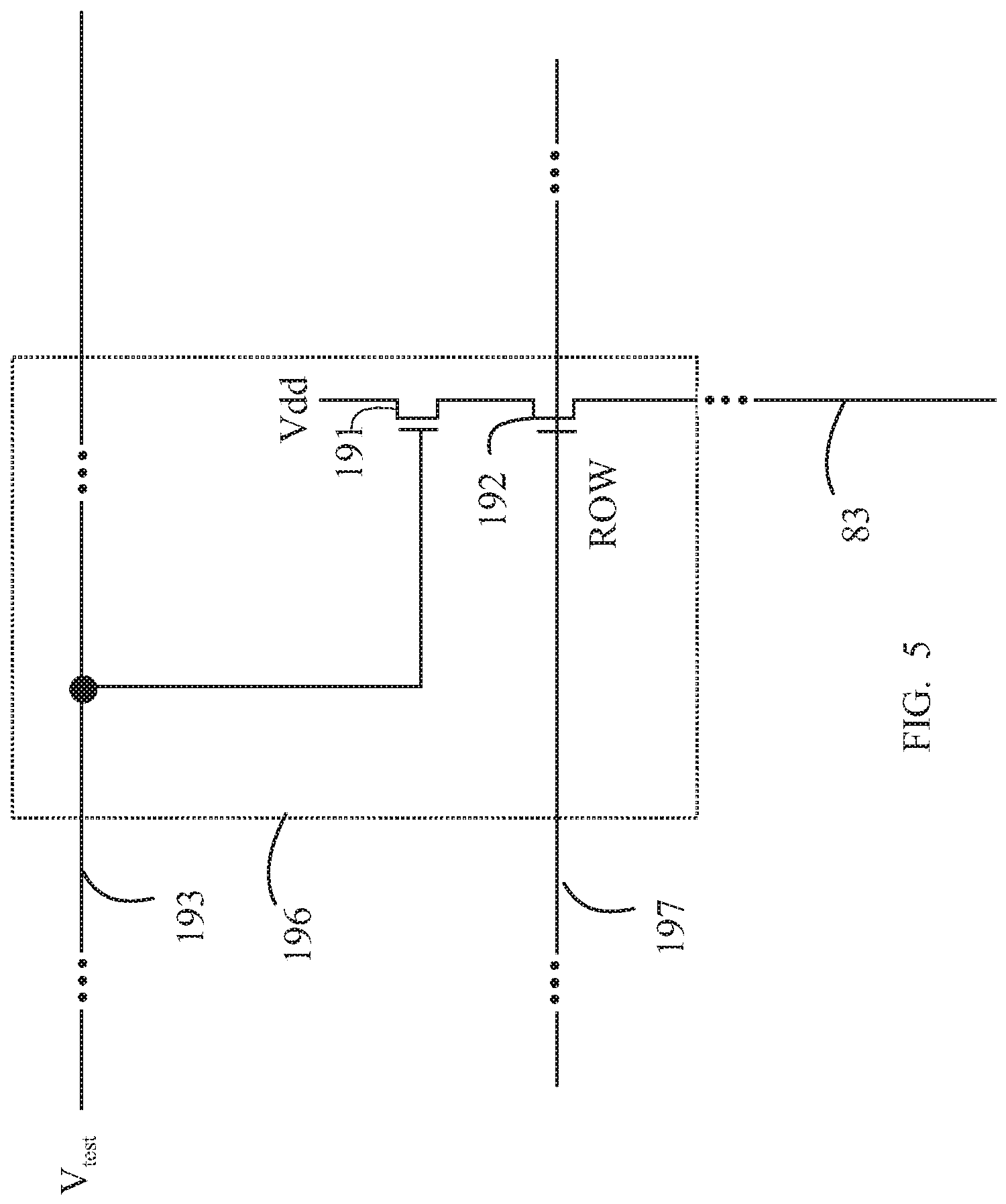