[0001] This specification generally relates to security for computer-based controllers, such as controllers for Internet of Things (IoT) devices.

[0002] More devices are becoming "smarter" with hardware and software that permit them to communicate via the internet, such as through cellular wireless networks, Wi-Fi, and Bluetooth. These internet-connected devices are often identified as being part of the "Internet of Things" (IoT), which is a term that broadly encompasses internet-connected devices configured to transmit and receive information related to their operation, such as status information. For example, many consumer products are now IoT devices with internet-connected features, such as home automation devices (e.g., wirelessly controllable light switches), appliances (e.g., smart refrigerators able to transmit images of the fridge's contents), and automobiles (e.g., internet-connected components, such as infotainment and navigation devices). For instance, modem vehicles can have over 100 controllers, or Electronic Control Units (ECUs), that are responsible for running most of the car's functions, such as the steering wheel, engine, braking system, airbags, and navigation systems.
[0003] Like any other externally connected computers, IoT devices (e.g., ECUs in connected cars) are vulnerable to cyber attack and have become targets for hackers. For example, controllers on several makes and models of cars, such as the JEEP CHEROKEE, TOYOTA PRIUS, TESLA MODELS, and NISSAN LEAF, have been successfully targeted and exploited by white hat hackers. Those hackers were able to compromise the vehicles and take command of nearly all of the control aspects, ranging from turning on the radio and windshield wipers to killing the engine while the car drove on the freeway. These exploits caused some of these car manufacturers to issue a recall on affected vehicles.
[0004] Cyber attacks come in many forms and flavors, but they generally share the same basic concepts: find a preexisting security bug (vulnerability) in the system's software, exploit it, and run malware. A common security bugs is neglecting to verify the size of input buffers, which hackers can exploit by passing long buffers that get out of the boundaries allocated for that buffer on the software stack. By getting out of the buffer boundaries, hackers may be able to access and change the pointer structure that controls the functional flow of code, which hackers can use to direct the controller to execute malware code. Although malware code can vary (e.g., keylogger, ransomware, e-mail spam), the exploitation mechanism is often similar - find a security bug, research and learn how to exploit it in order to gain control, and use the control to run the malware code.
[0005] EP 2892199 A1 relates to a system for providing security to in-vehicle communication systems, such as through processing data from a plurality of Watchmen.
[0006] WO 2016/046819 A1 relates to detecting cyberattacks to a vehicle, such as through computing a correlation calculation between on-board agent module metadata and metadata from a second agent module installed within road infrastructure.
[0007] WO 2013/063474 A1 relates to a system for detecting malware, such as by implementing an agent file filter to manage mappings between filenames and corresponding hashes.

BRIEF DESCRIPTION OF THE ATTACHMENTS

FIG. 1A is a conceptual diagram of an example system for generating and implementing a custom security policy on an example controller.

FIG. 2 is a diagram of an example system for detecting and reporting anomalies across a population of controllers

FIG. 3 depicts an example interface for providing an incident report for a controller.

FIG. 4 depicts an example process for generating and transmitting real-time report data for a population of controllers.

FIG. 5 depicts an example process for detecting anomalies across a population of controllers.

FIG. 6 is a block diagram of example computing devices.

1. A method for providing security on externally connected controllers, the method comprising:

the security middleware layer is positioned to restrict one or more kernel processes of the operating system to operations that are permitted according to one or more security policies (158a, 158b, ... 158n);

statistically analyzing, by the server system (210), the operation information;

identifying, by the server system (210), one or more anomalous controller behaviors based on the statistical analysis;

providing, by the server system (210), information regarding the one or more anomalous controller behaviors on the controller as potential security threats;

updating, by the server system (210), the one or more security policies (158a, 138b, ... 158n) to exclude performance of the one or more anomalous controller behaviors in response to the information; and

the one or more whitelists define the operations that are permitted.

the one or more anomalous controller behaviors comprise a particular sequence of function calls, and

the information removed from the one or more whitelists comprises function mappings outlining the particular sequence of function calls.

the one or more anomalous controller behaviors comprise receipt or transmission of a particular network packet, and

the one or more anomalous controller behaviors comprise execution of a particular process, and

the information removed from the one or more whitelists comprises information identifying the particular process.

6. The method of claim 1, wherein the controller is an automotive controller and the device is a vehicle (152).

7. The method of claim 1, wherein the operation information comprises malware reports that identify malware blocked on the plurality of instances of the controller (230a, 230b, ...230n), the malware reports including copies of the blocked malware.

10. The method of claim 8, wherein the aggregate information (252) includes information regarding a current status of other instances of the controller running on other devices (231b, ...231n).

12. The method of claim 8, wherein the controller is an automotive controller and the device is a vehicle. 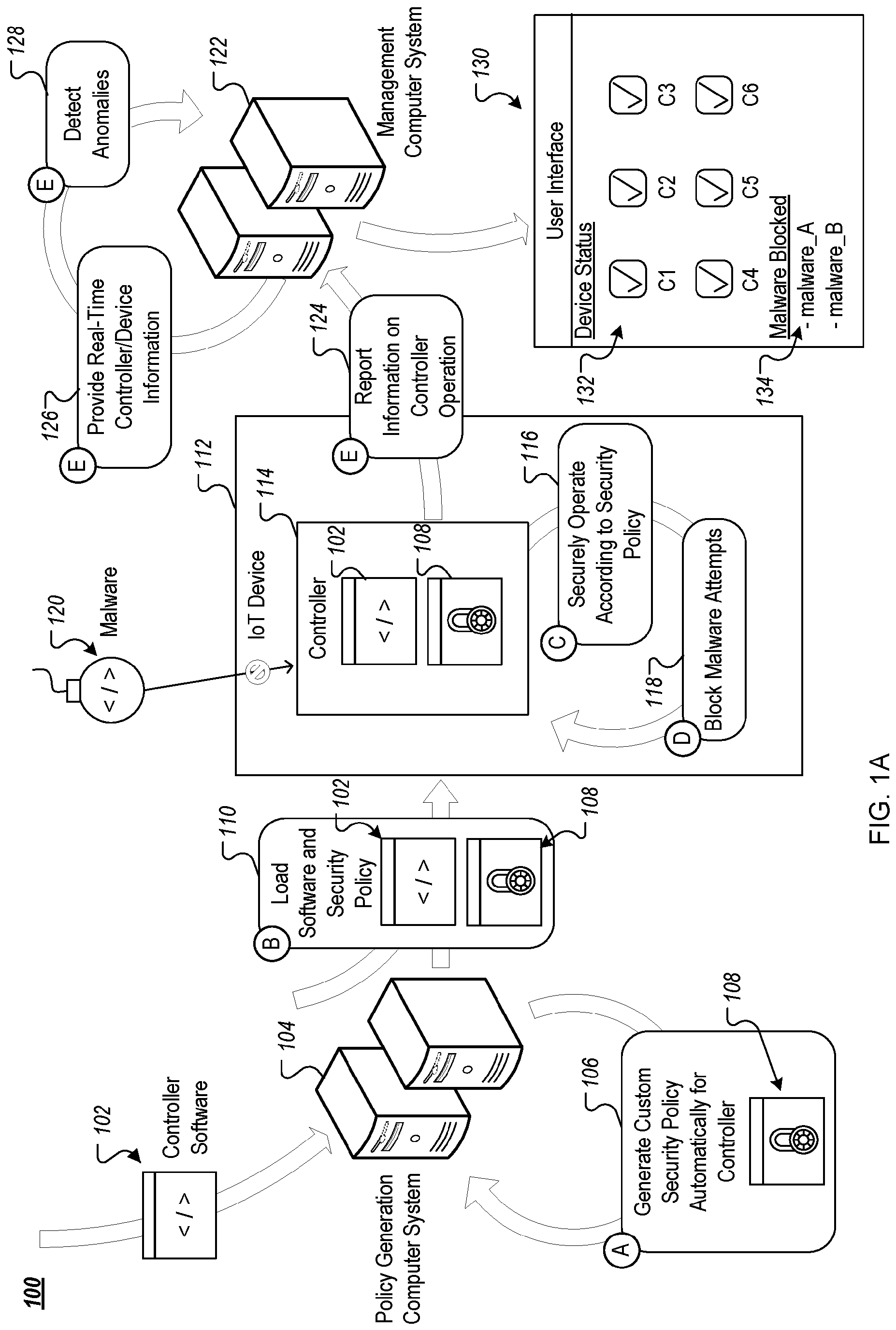 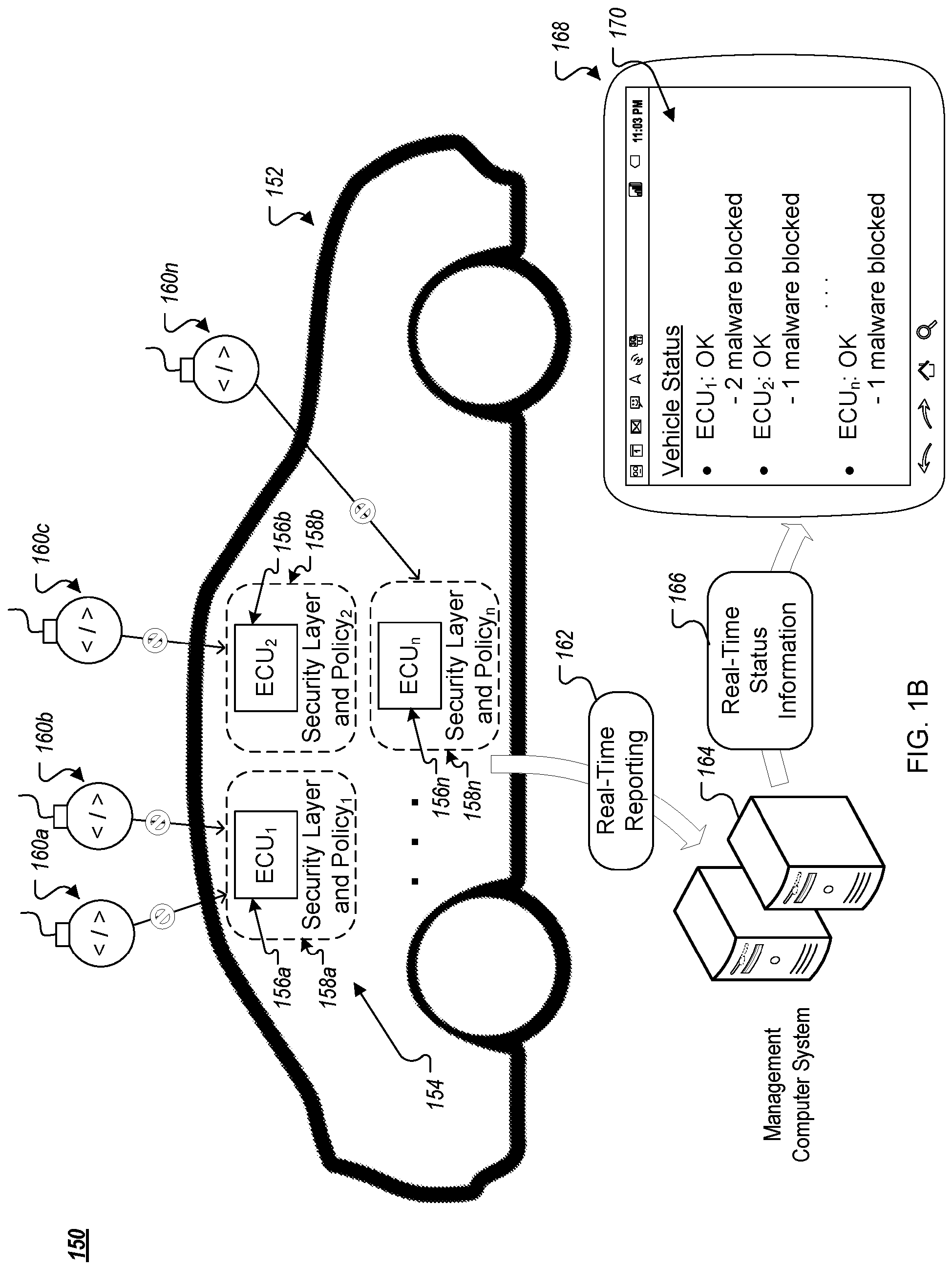 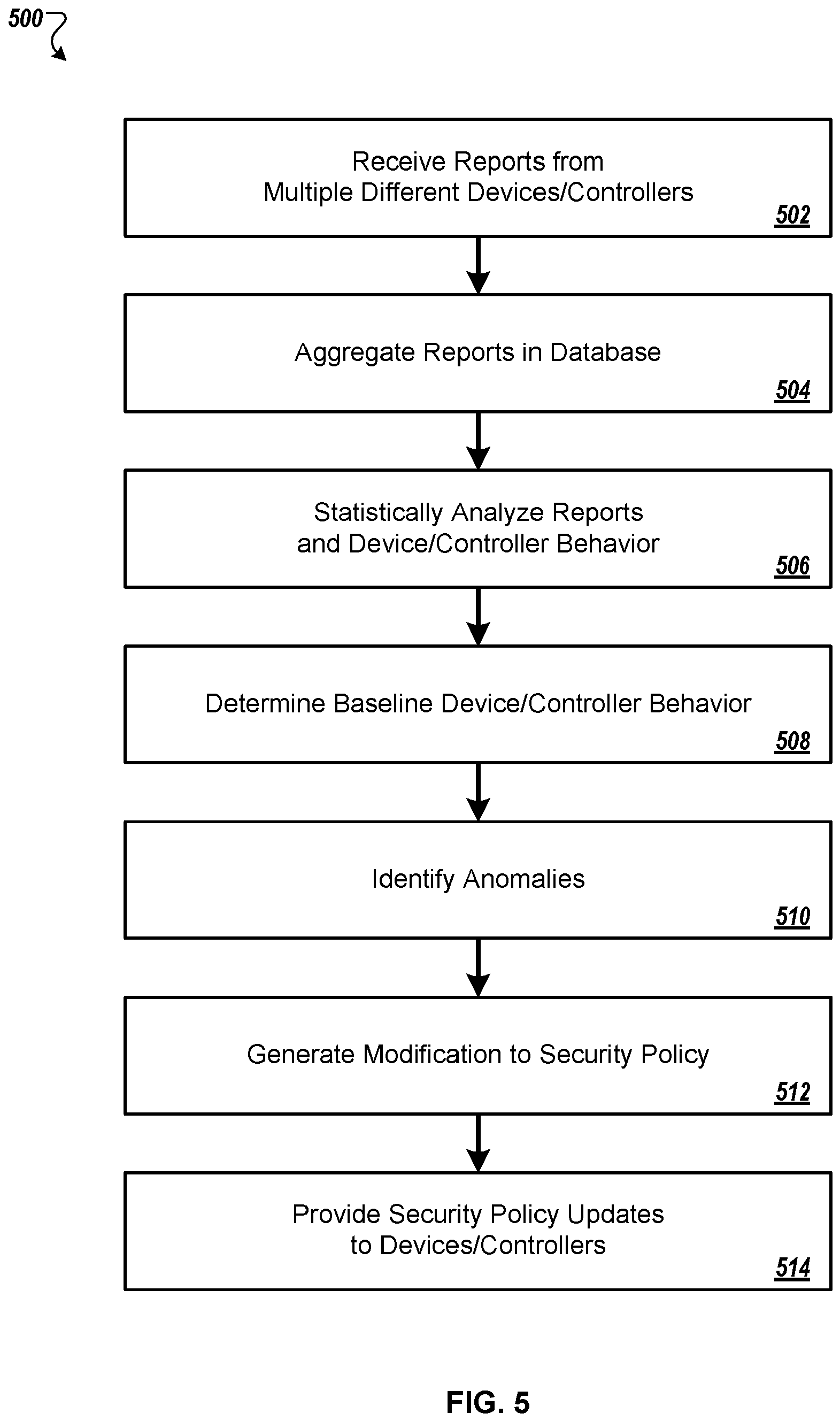