[0001] The technical solution relates to the mechanism for lifting of the boarding plates of railway wagons designed for transportation of cars. The mechanism enables loading and unloading of cars with small ground clearance without a risk of collision between the chassis and overhangs of cars and parts of wagon deck.

Actual state of the art

[0002] Known solution is lifting of the boarding flaps of railway freight wagons designed for transportation of cars by means of the mechanism consisting of four screw lifters located under the boarding plate and driven by a set of seven gear boxes.
[0003] In the document GB995136 A, published on 1965-06-16, a railway wagon is described with a frame, which is created as a wagon platform. At one frame end, a movable platform is mounted with connecting elements for connecting of the wagon with some other wagon, whereby the platform is rotary mounted at the frame end so that the platform is movable between the upper position and the lower position under the wagon floor. It is arranged so that in the lower position the connecting element is parallel with horizontal, or basically horizontal, plane.
[0004] In the document FR2473974 A1, published on 1981-07-24, a wagon is described that contains portable platforms for the manual manipulation with positioning projections for connecting of the wagon end. The platforms projects above the buffers in order to connect the platform at the wagon end or some other end freight wagon. The platforms are located slightly higher than the wagon floor and close to the container floor. The platform is fitted in the suspended attachment at the wagon end.
[0005] In the document EP0518750 A1, published on 1992-12-16, a wagon is described, the wagon having an end ramp, which is connected with the buffer and rotary around the lateral horizontal axis, whereby the ramp is equipped with rails for loading and unloading of chassis. The ramp is lifted or lowered by means of the motor pump with a hydraulic control system and a reversible engine, which leads through chain and cogged gear. The hydraulic system may include cylinders, which lift and lower the ramp.
In the document DE2447576 A1, published on 1976-04-08, a wagon is described, the wagon having a loading platform for freight wagons. The bearing platform is located between two adjacent freight wagons that stand one after another, and that are equipped, on their bottom side, with supporting bearings located above the buffer bearings, or they have the bearing sleeves, which interferes with the individual compensatory bush. This equipment provides a firm attachment of the loading platform between the two adjacent freight wagons so that it is possible to travel during loading or unloading operations. The bearings have the guiding plates on the ends heading to the lower side of the loading platform, which interfere with the sliding guiding elements attached to the platform.
In the document US2003110975 A1, published on 2003-06-19, a wagon is described, the wagon having a loading platform, in which the ramp control mechanism for the rolling stock has the first cylinder, the second cylinder and the clutch for reaching the movement into the lifted position.
The first double-acting cylinder makes the second double-acting to move the arm and the coupling to the lowered position, when the first cylinder moves the ramp to the opened position. The first cylinder makes the second cylinder to move the arm and the lifting device moves it to the lifted position when the first cylinder moves the ramp to the closed position. The device is used for loading and unloading of cargo, e.g. semi-trailer from the train. The mechanism reduces impacts of the ramp. It reduces the operating pressure necessary for lifting and lowering of the ramp, by which it reduced consumption of pressed air for one operation cycle.
[0006] The document GB 716260 A1 describes a loading platform of which a portion is pivotally supported on props for movement between a lower platform loading position and an upper position in which vehicles can be run off on to the upper floor. The platform is raised and lowered by a winch and cables, and is held in its raised position by catches actuated by handles.
[0007] All described solutions of the current state of the art contains several disadvantages - mainly difficult design and application of complicated parts or solutions, which cannot be controlled and they shall be manually placed to the required position.

Nature of the technical solution

Summary of figures in the drawings

Fig. 2 and 3 displays the boarding plate in the lower and in the upper position (without the wagon body).

Examples of embodiments of the technical solution

Application in the industry

[0012] The mechanism for lifting of the wagon boarding plate is suitable for railway wagons designed for transportation of cars. The mechanism enables loading and unloading of cars with small ground clearance without a risk of collision of chassis and car overhangs with parts of the wagon platform.
The mechanism consisting of small number of parts is suitable also for wagons, which have only limited areas for placing of mechanisms for control of the boarding plate.

- at least two sets of levers (3) connected to and supporting the boarding plate (4), and

- at least two stripes (2) equipped with travelling pullies and rotatably attached to the sets of levers (3),

whereby the stripes (2) equipped with travelling pullies are also connected to the direct drives (1) in such a way that rotating the rotatable input shaft (5) causes the direct drives (1) to push away or pull in the stripes (2) equipped with travelling pullies, thereby changing the inclination of the sets of levers (3) and thus the height of the boarding plate (4). 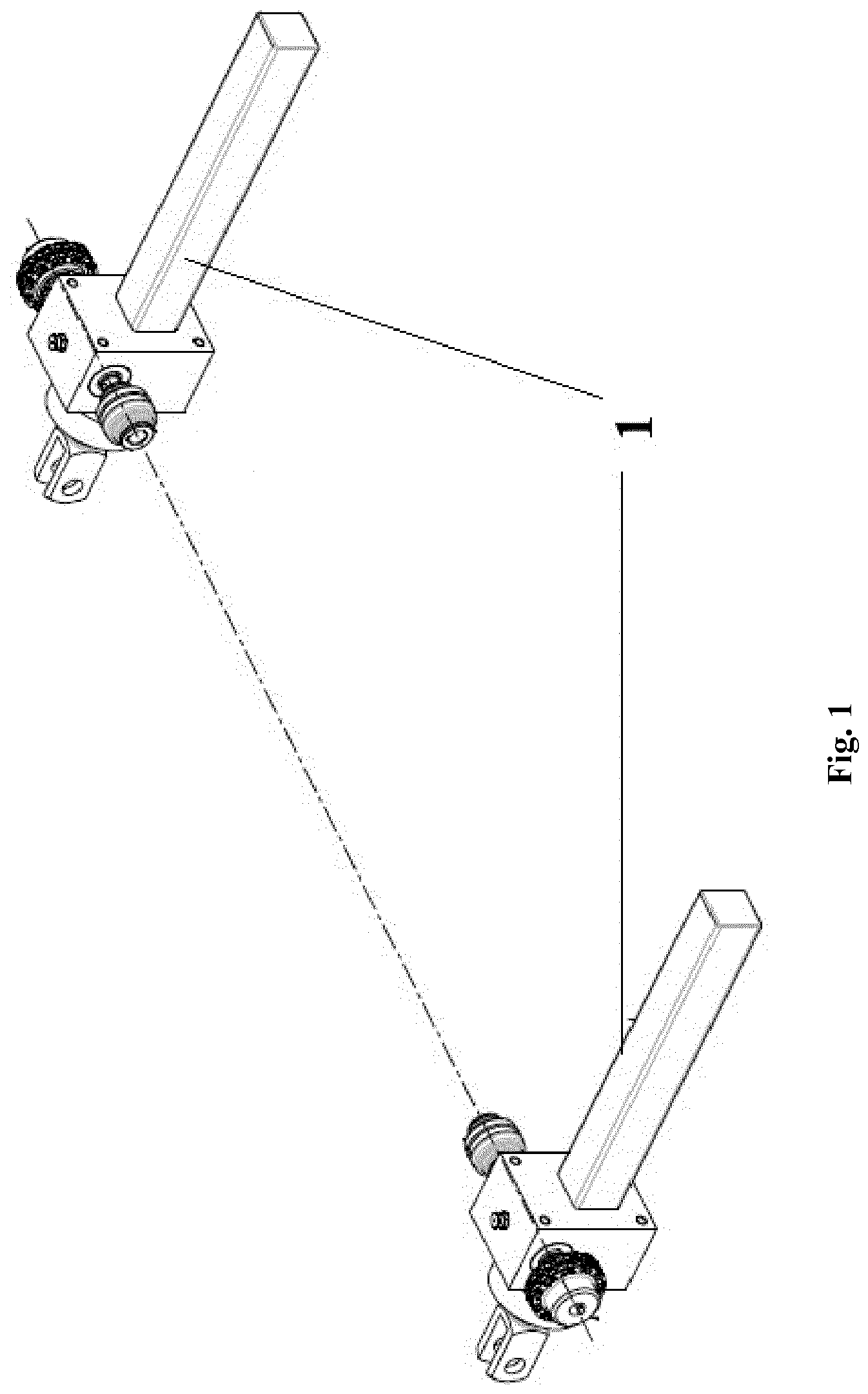 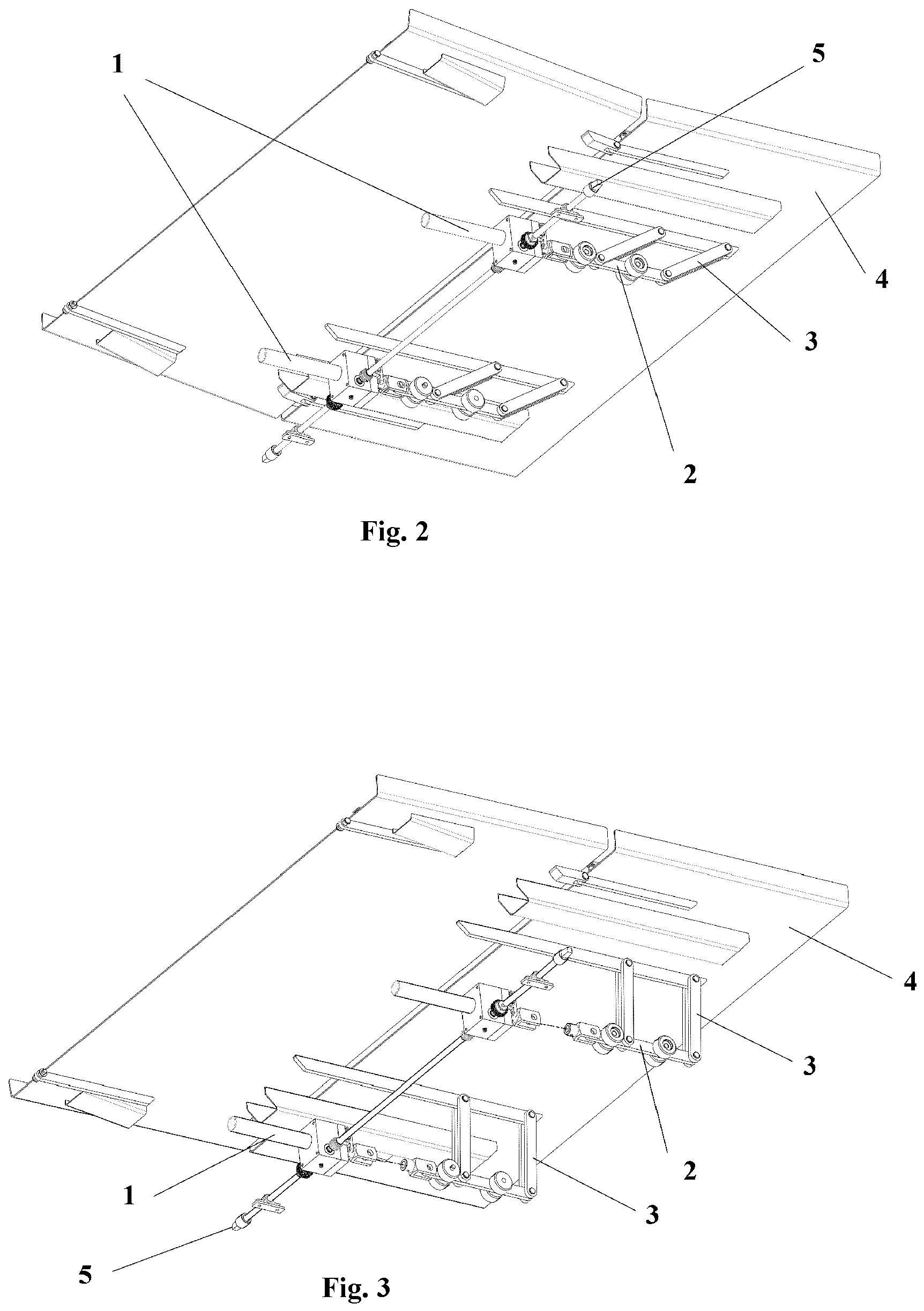