[0001] This invention relates to systems for monitoring therapy treatments, and more specifically to observing the effects of radiation and anatomical changes during radiotherapy treatment fractions.

[0002] While a patient undergoes radiotherapy treatment, the location, arrangement or shape of anatomical structures or organs can vary relative to the treatment coordinate system being used to delivery the therapy. This is especially true with respect to a planning stage, when a treatment plan is initially devised, and when they are set up for each treatment fraction (commonly referred to as interfractional motion). Furthermore, the anatomy can change during the actual treatment delivery, commonly referred to as intrafractional motion. Having the target tissue move or change shape relative to the treatment plan can cause a deterioration of the actual delivered dose to the target organs and risks exposing surrounding sensitive structures to unwanted radiation.
[0003] Due to its excellent soft-tissue contrast, ultrasound imaging is a commonly-used method to obtain images of patient anatomy throughout an entire radiotherapy process. For example, three-dimensional ultrasound (3DUS) images acquired in conjunction with a CT simulation may be used to enhance contouring of structures for planning by fused CT/3DUS images and to form an initial reference image of the internal anatomy for subsequent image guidance. Similarly, 3DUS images acquired in the treatment room, prior to each fraction, may be compared to reference 3DUS images to identify interfractional changes in internal anatomy. These 3DUS images acquired are generated by manually sweeping a 2DUS probe over a region of interest while detecting the position and orientation of the 2DUS probe. A freehand-3DUS image is then constructed relative to a room coordinate system is the imaging or therapy room. The position and orientation of the probe throughout the sweep are commonly found by detection of infrared markers affixed to the probe handle by a calibrated optical camera system.
[0004] Although freehand-3DUS imaging is useful for both planning and measuring interfractional motion, there are benefits to leaving the probe in place once the patient is set up in the treatment room, and acquiring either 2DUS or 3DUS images using a non-freehand 3DUS probe using, for example, a mechanically sweeping probe or matrix probe. Images can then be acquired at will, independent of the radiation therapist, without user variability. Multiple images can be acquired before, during, and after treatment to detect intrafractional motion, and changes in target location or shape can be compensated for during delivery of the current treatment fraction and/or in subsequent treatment fractions.
[0005] However, due to various constraints these techniques are not technically feasible. One constraint arises from the geometry of treatment and imaging apparatus; an ultrasound probe, for example, generally must maintain contact with the patient while the radiation is being delivered, but in most cases, the probe sits in the path of commonly used beam angles. This will affect the radiation dose distribution inside the patient, which in turn cannot be compensated for standard radiotherapy beams.
[0006] Moreover, radiation beams are typically directed at the patient from multiple intersecting directions, and the probe must not be in the path of the radiation beam, which would cause attenuation of the radiation, and potentially increase the skin dose to the patient. Furthermore, a user cannot remain in the radiation room to operate the ultrasound device while the beam is on due to radiation safety concerns. What is needed, therefore, are methods, systems and apparatus that facilitate the use of ultrasound imaging for planning, inter and intrafractional imaging of a patient undergoing radiotherapy treatment while not interfering with the radiation beam and permitting operation without a user in the treatment room, thus allowing for appropriate adjustments to be implemented during treatment delivery, for changes to patient positioning, or in some cases, to halt treatment altogether.
[0007] Published US patent application US2007/015991 concerns apparatus for tracking a soft tissue target with ultrasound images, without the use of fiducial markers. The apparatus is used in conjunction with radiotherapy apparatus, so that ultrasound images may be acquired during delivery of radiotherapy treatment.
[0008] JP2003-117010 relates to a radiotherapy apparatus having a radiation exposure means, a CT scanner and an ultrasonic probe. The ultrasonic probe is mounted to an arm, whose position is controllable in three dimensions. Ultrasonic images can be captured at the time of treatment.

[0019] In the drawings, like reference characters generally refer to the same parts throughout the different views. Also, the drawings are not necessarily to scale, emphasis instead generally being placed upon illustrating the principles of the invention.

FIG. 1 is a schematic diagram illustrating the use of a diagnostic imaging device to obtain images of a lesion during the administration of radiation therapy in accordance with one embodiment.

FIG. 2 is a schematic diagram of a hand-held imaging device including tracking markers to facilitate obtaining positional information in accordance with one embodiment.

FIG. 3 is a schematic diagram illustrating the use of a hand-held imaging device in a transperineal application to obtain images of a lesion during the administration of radiotherapy to a lesion near the prostate gland in accordance with one embodiment.

FIG. 4 is an illustration of a treatment room in which the invention may be implemented and used.

FIG. 5 is an illustration of a brace according to one embodiment.

FIG. 6 is a schematic illustration of an adaptive radiotherapy treatment monitoring system according to an embodiment of the invention.

a storage device (605) for receiving the images from the imaging device (120);

compare two or more of the images of the areas of interest; and 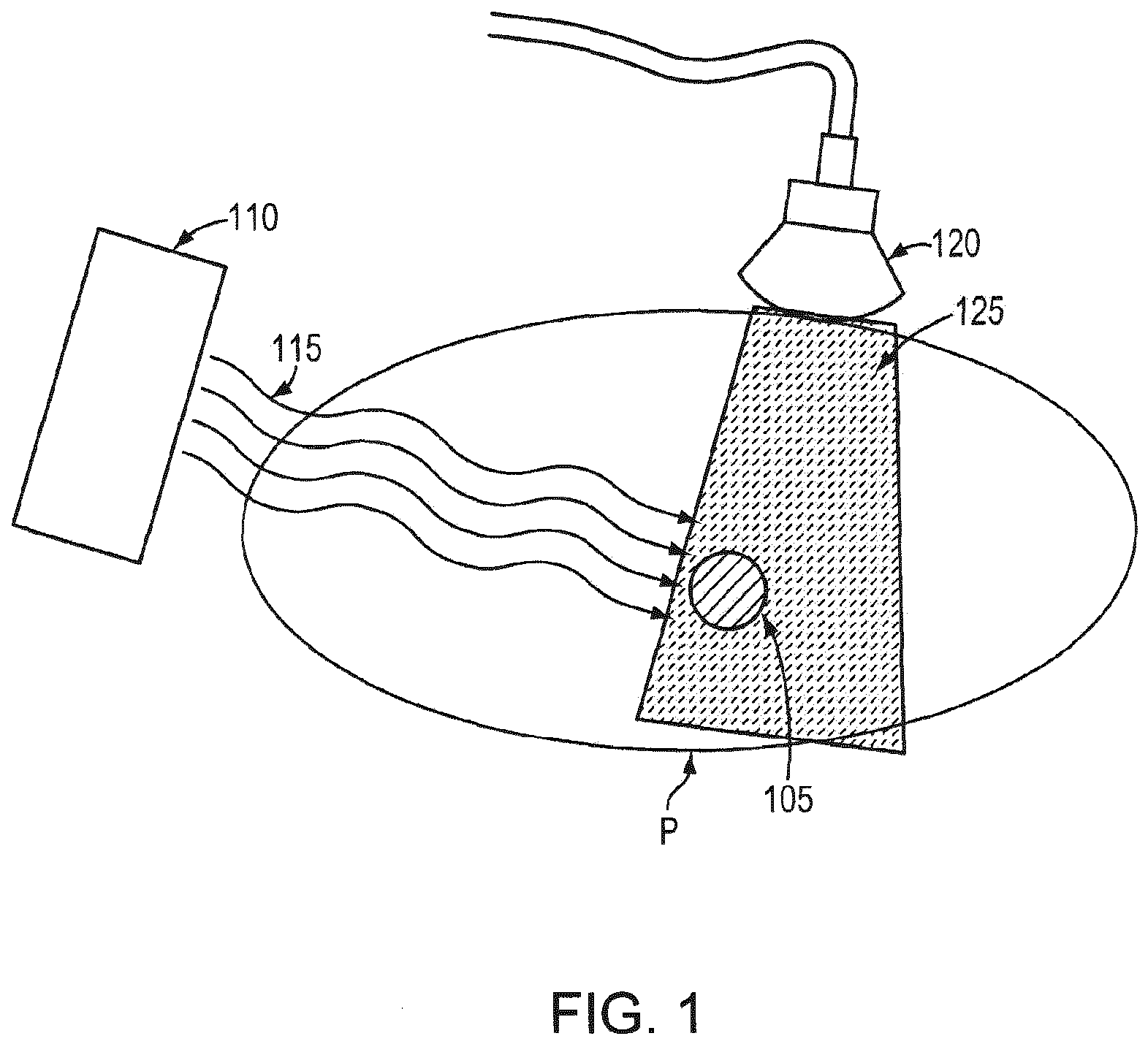 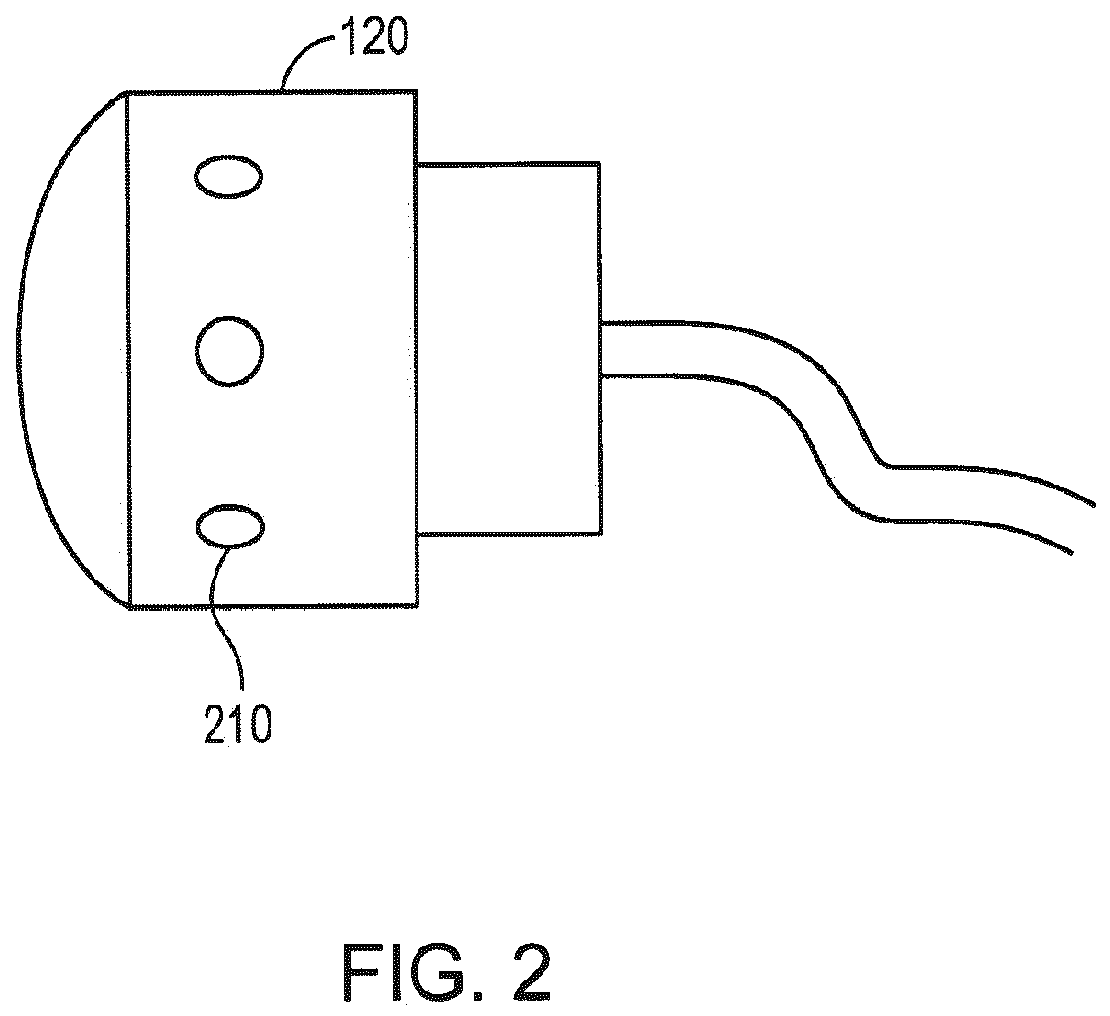 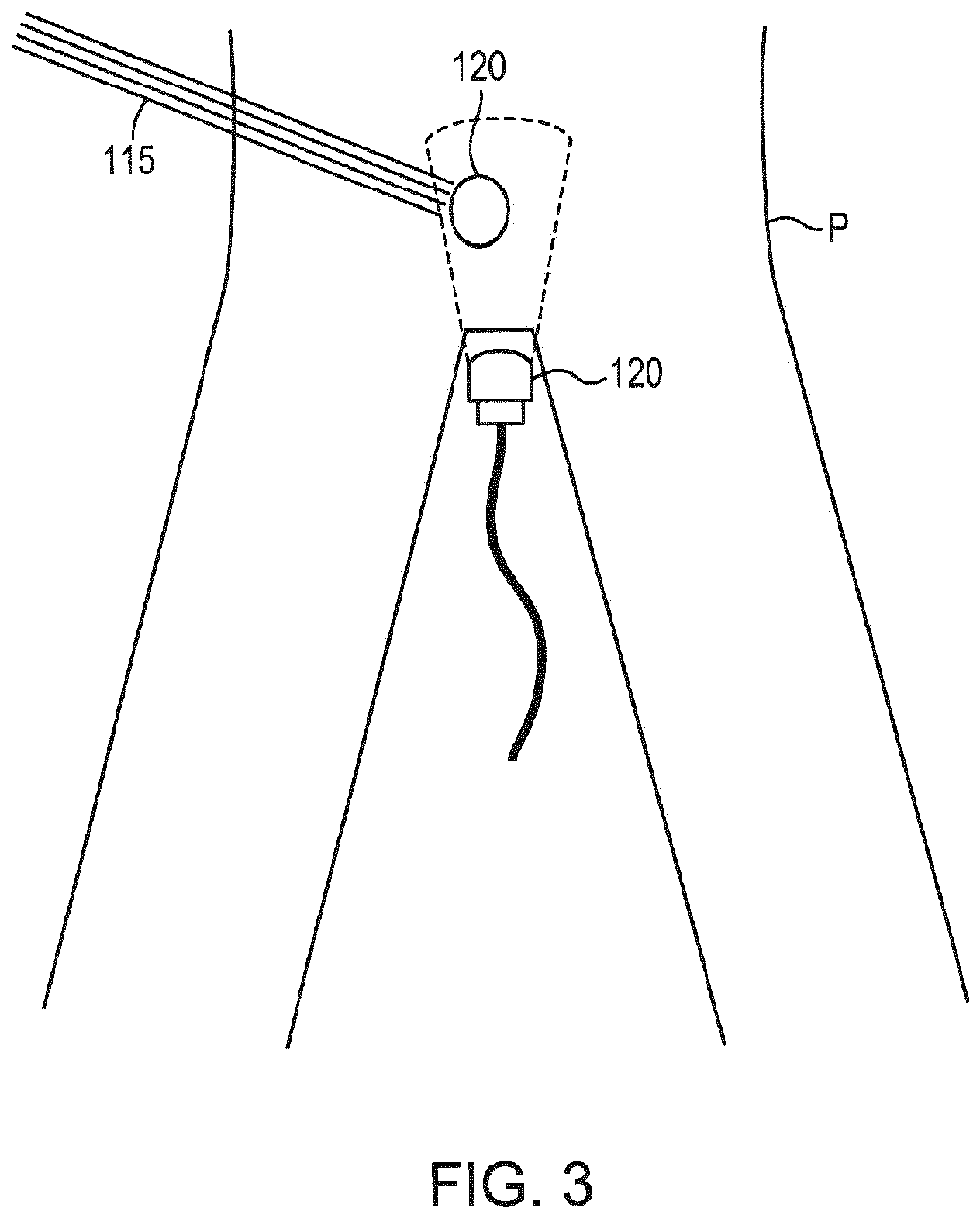 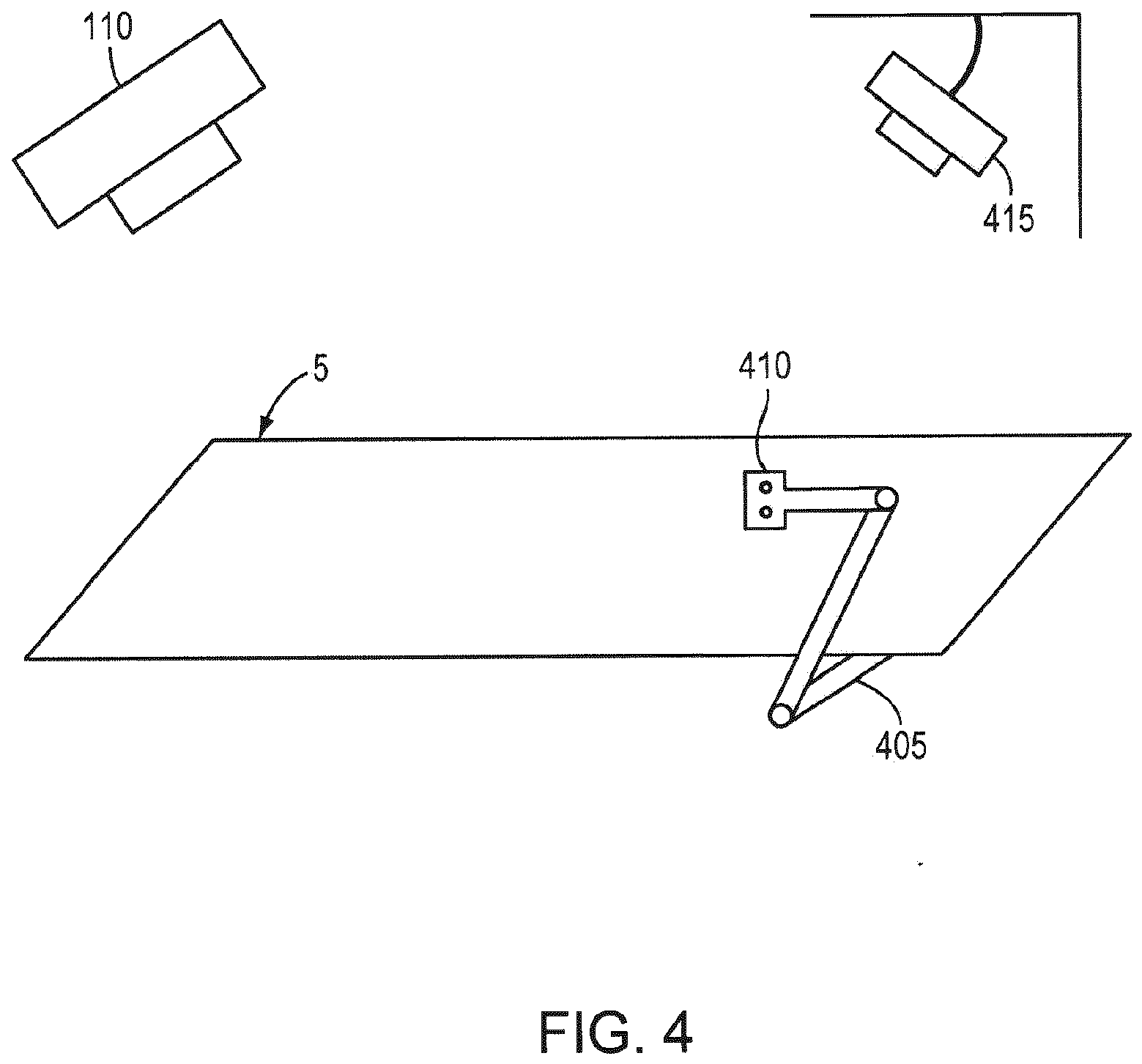 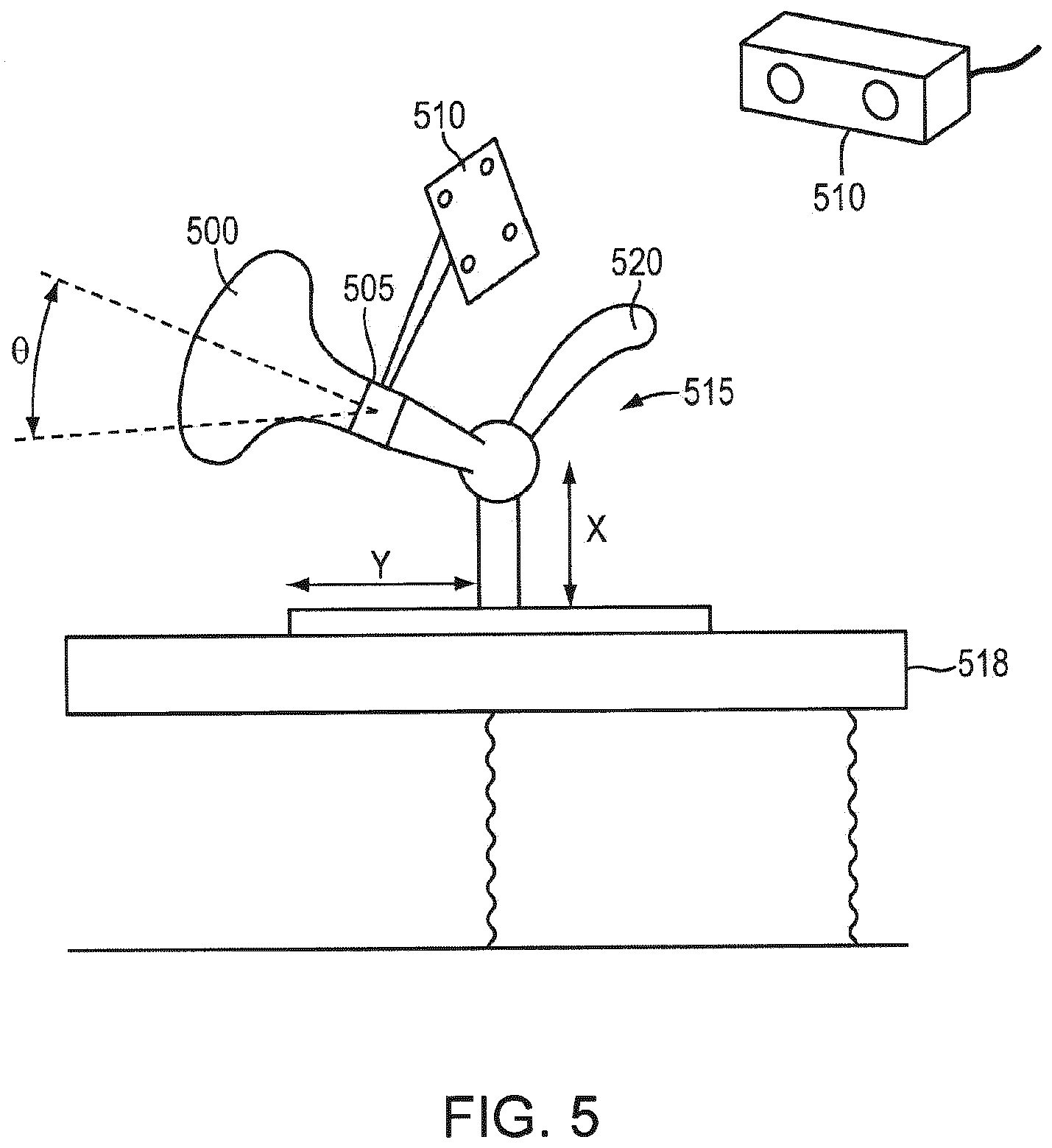 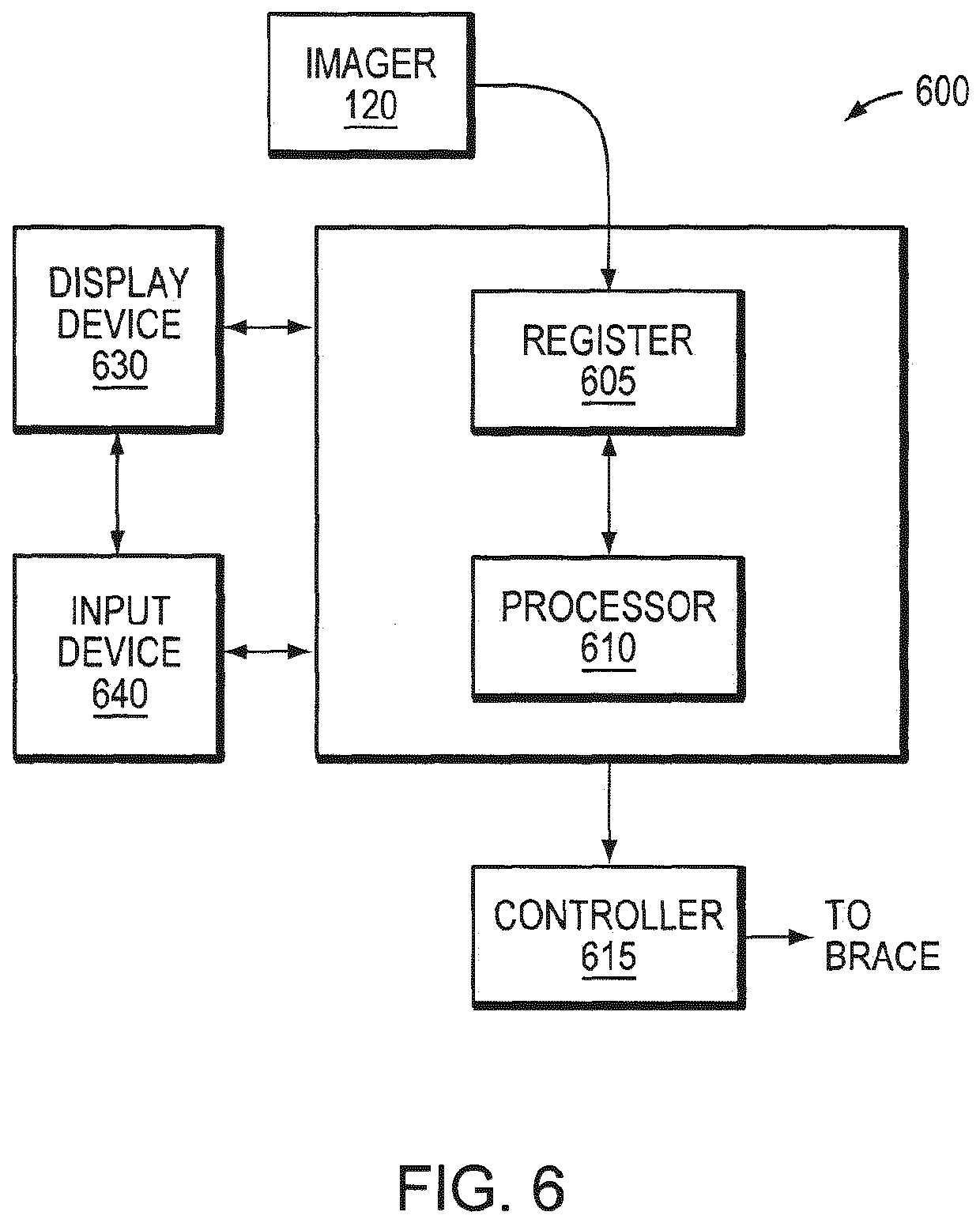