Figure 1
shows a longitudinal section of an exemplary embodiment of a decoction device according to the invention;
Figure 2
shows a cross-section of a (transmission) part of the decoction device of figure 1; and
Figure 3
is a perspective view of the part in figure 2.

[0013] It is otherwise noted here that the figures are purely schematic and not always drawn to (the same) scale. Some dimensions in particular may be exaggerated to greater or lesser extent for the sake of clarity. Corresponding parts are designated in the figures with the same reference numeral.
[0014] Figure 1 shows in side view a cross-section of an exemplary embodiment of a decoction device according to the invention. This decoction device is applied substantially in a horizontal orientation in an extraction machine; in this example a coffee machine for preparing espresso coffee and coffee specialties possibly derived therefrom, such as for instance lungo and cappuccino. The decoction device comprises a plastic housing 3 which provides space for a cylindrical decoction chamber 7 enclosed by a chamber wall 5. Provided in the chamber wall 5 with a view to supply of coffee powder into decoction chamber 7 is a supply opening 9 through which a measured quantity of ground coffee can be introduced into the decoction chamber. Because of the horizontal orientation of the decoction device this results in the forming of a characteristic powder heap 11 as shown by way of illustration in the figure.
[0015] The decoction chamber is bound on either side by a first chamber bottom 20 and a second chamber bottom 30. First chamber bottom 20 is axially movable and coupled to a linear actuator 40 in the form of a set of screw spindles, one of which is shown in the figure. The screw spindles are driven by a motor of the extraction apparatus in which the decoction device will be placed, which motor is located outside the decoction device and therefore not further shown. The decoction device comprises for this purpose a motor connection 45 on an outer end of screw spindles 40. The first chamber bottom is moreover provided with supply means for the feed and passage of hot water. The supply means comprise a hot water connection 25 to which a water conduit of the extraction apparatus can be coupled and supplied during operation by a hot water supply and a pump of the extraction apparatus. Hot water is hereby delivered under increased pressure and guided into decoction chamber 7 via a passage opening provided for the purpose in the first chamber bottom.
[0016] Second chamber bottom 30 comprises a coffee filter 33 and an outflow opening 35 through which the extract to be prepared can exit while powder 11 remains behind in the decoction chamber. Provided outside the plane of the drawing on the opening is a hose coupling for an outlet conduit leading to an outflow of the apparatus where the product can be taken away by the user.
[0017] The powder 11 has already been compressed to a cohesive bed, i.e. before extraction, in that the first chamber bottom 20 has been extended axially by actuator 40, carrying the coffee powder 11 with it. The thus compressed coffee bed allows, in combination with an adequate pump capacity, a pressure build-up which is sufficient to extract a so-called espresso coffee. It is desirable here that powder 11 is distributed uniformly over the bed so that the hot water is guided uniformly therethrough.
[0018] Provided for this purpose is a drive which in this example, see also figures 2 and 3, is coupled to second chamber bottom 30 in order to impose a rotation thereon as it approaches first chamber bottom 20. The rotating filter is driven by being coupled to one of the two spindles 40 already being used to drive the basic mechanism of the decoction device. During the movement of the opposite chamber bottom 20 the rotating chamber bottom 30 will ensure that a uniformly distributed coffee bed results.
[0019] In this example this drive comprises a gearwheel transmission 51..53 to one of the screw spindles 40. With a suitable transmission ratio of the gearwheels 51 ..53 an appropriate rotation speed can be imparted here to second chamber bottom 30 with a view to an optimal distribution of the coffee powder 11 in the coffee bed. Further contributing hereto is a relief which can be provided on the main surface of the second chamber bottom facing toward first chamber bottom 20.
[0020] Provided for the purpose of avoiding overload of the motor, spindles 40 and gearwheel transmission 51..53 between spindles 40 and the rotating chamber bottom 30 is a slip coupling 60. This latter ensures that the coffee bed can be further compacted once it has been uniformly distributed. Because of this coupling the rotating chamber bottom 30 ceases to rotate when the resistance of the coffee bed becomes too high. This mechanism is mounted in the front frame of the decoction system further shown in figures 2 and 3. Slip coupling 60 is mounted directly onto spindle 40. The slip coupling consists of bush 61, a gearwheel 51, a slide plate 62 and a spring 63. Via an intermediate gearwheel 52 the rotation of spindle 40 is transmitted to a central gearwheel 53 mounted on the chamber bottom 30 to be rotated. This chamber bottom 30 comprises a filter carrier 31 and a filter 33, and is therefore also referred to simply as filter.
[0021] All in all, a particularly effective and reliable decoction device is hereby provided, in particular for a coffee machine, with which a better coffee quality and uniformity can be achieved.
[0022] Although the invention has been further elucidated above with reference to only a single exemplary embodiment, it will be apparent that the invention is by no means limited thereto. On the contrary, many variations and embodiments are still possible within the scope of the invention for a person with ordinary skill in the art as defined by the scope of the claims.

2. Decoction device as claimed in claim 1, characterized in that the drive comprises a transmission (51-53) to the actuator (40) of the first chamber bottom.

4. Decoction device as claimed in one or more of the foregoing claims, characterized in that the second chamber bottom (30) is coupled via a slip coupling (60) to the drive (40).

5. Decoction device as claimed in claim 4, characterized in that the slip coupling comprises a set of friction bodies (61,62) which lie under pressure against each other transversely of a drive line, in particular under a spring pressure of spring means (63).

6. Decoction device as claimed in one or more of the foregoing claims, characterized in that at least one of the chamber bottoms (20,30) bears a relief on a main surface facing toward the other chamber bottom (30,20).

7. Extraction apparatus, in particular a coffee machine, comprising a decoction device as claimed in one or more of the foregoing claims. 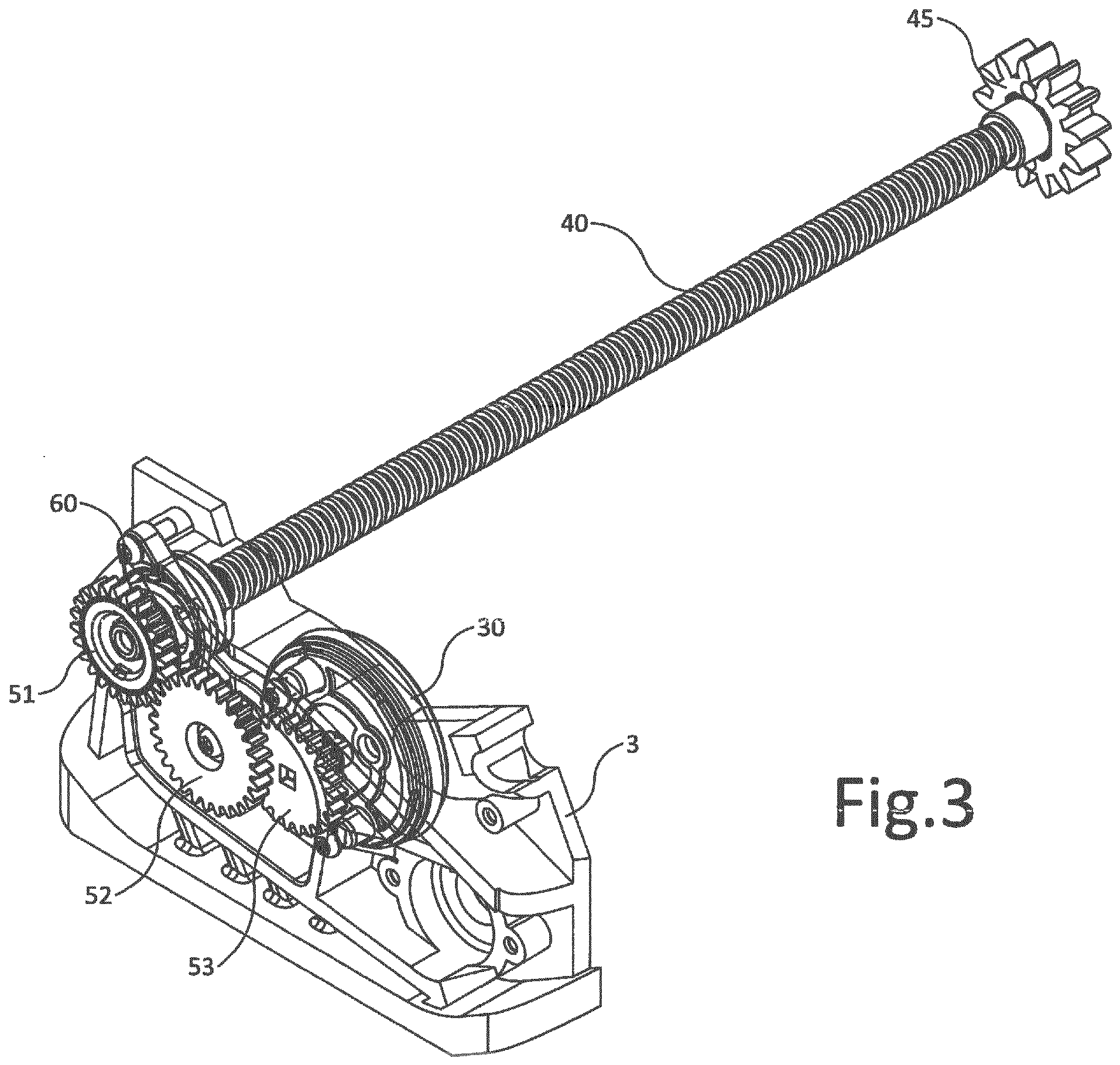