[0002] The first steps of theory finding took place in 1970, when Landrum Shettles and David Rorvik, two of the most famous obstetricians and gynecologists in USA, published their famous book "How to choose the sex of your baby?"
[0003] They explained that the male (Y) sperm is smaller, lighter and faster than the female sperm (X). They proposed a new theory on how to give birth to boys and girls. The theory is based on the ovulation timing. They recommended that parents desiring a girl are encouraged to have sex three or four days before ovulation. The weaker and smaller male sperm will die within the first two days while the stronger and bigger female sperm will be able to live longer and fertilize the ovum once released from the ovary. On the other hand, it is better for boy-desiring couples to have sex closest to the time when a woman's ovum is released, giving better chance for the male sperm to fertilize the ovum.
[0004] Upon starting to put the theory into practice, researchers were divided into two groups. One group supports the theory, claiming 75% success rate as mentioned in the article published by the Independent (UK) in 2002 under the title "Can you choose your baby's sex?" by Roger Dobson and republished on 25/8/2006 by Independent Online. The other group strongly opposes the theory, on the grounds that scientific evidence and data tend to disprove it, as claimed in an article entitled "Gender Selection Methods by Intercourse Timing: Review of Published Scientific Articles" (fertilityfriend.com) 1998-2006.
[0005] The above-mentioned article listed the following three researches as refuting Shettles theory:
(John T. France and colleagues, for example, in an article published in 1992 in The International Journal of Fertility say "...our findings tend to disprove the Shettles theory..." Likewise, RH Gray, in a 1991 article in American Journal of Obstetrics and Gynecology says that the Shettles method is contradicted by scientific data. Finally, in a 1995 study published in the New England Journal of Medicine, researchers Allen Wilcox, Clarice Weinberg and Donna Baird say that "the timing of sexual intercourse in relation to ovulation has no bearing on the sex of the baby.")
[0006] US 2003/0224065 discloses a method and kit for increasing the chances of conceiving a child having a desired gender.

Disadvantages of Prior Art:

[0007] However, prior researches suffer some disadvantages. I believe that Shettles theory includes the following mistakes:
[0008] The theory of the ovum wall thickness explains the most important factor determining the sex of the baby. On the other hand, the theory of cell fragility offers an ideal solution for treating the thickness of the ovum wall. It also offers a solution for some types of infertility and chronic diseases for which modern medicine cannot offer a cure.

Disclosure of the Invention:

[0009] The present invention provides a novel and easy-to-use drug, designed in the form of capsules which are easy to swallow and which are defined in the claim. The novel drug satisfies the needs of many couples, whether the newly-wed ones desiring to have a boy as their first child or those having female children and desiring to have boys or vice versa. Accordingly, it may help each family to enjoy a desired social and psychological balance.
[0010] The drug, according to the present invention, also provides a solution and treatment for couples suffering from unexplained infertility and for women having polycystic ovary syndrome or undergoing recurrent miscarriage.
[0011] The drug, according to the present invention, may also help those suffering from chronic diseases for which medicine provided no cure, such as knee osteoarthritis, rheumatoid, lupus erythematosus, psoriasis, autoimmune diseases, AIDS, and Hepatitis B & C.
[0012] The theory of cell fragility provides a treatment not only for a thick ovum wall but also for all the body cells, including immune cells. Having an increased salt intake and blood alkalosis and eating much ginger tend to reduce the excess activity of the immune system, thus giving rise to autoimmune diseases. On the other hand, one can increase immunity by reducing one's salt intake, increasing blood acidity by eating orange, lemon, Seville orange and vinegar, depending on natural sources of sugar (such as honey, fruits and pumpkin) and consuming some herbs (such as black cumin, Echinacea, and ginseng) - and having cupping done (on the anatomical surface of the liver and immune areas). By increasing immunity, diseases such as AIDS and Hepatitis B & C can be cured. This general theory of cell fragility may also be used in other medical specialties, such as orthopedics, ophthalmology, neurology, oncology, etc.
[0013] The idea of the novel drug is based on two modern theories:
The first theory is named "ovum wall thickness". It assumes that the outer coat of the ovum differs in thickness from one woman to another depending on the number of layers comprised in the corona radiata encapsulating the ovum coat. References state that an ovum wall consists of three components:
[0014] The main factor undergoing increase and decrease is the layers of the corona radiata. References state that it consists of one to six layers or even more. They encapsulate the coat of the ovum. Hence, if the number of layers of corona radiata becomes smaller (1-2), then the ovum coat is thin. On the other hand, if the number of layers becomes larger (5 or more), then the ovum coat is thick. An average coat thickness reaches 3-4 layers of corona radiata.
[0015] Shettles and Landrum found that the male sperm, which is smaller, lighter and faster, always reaches the ovum first. This finding was later confirmed by researches, such as the Microsort method, which is used for choosing the gender of the baby in ICSI. If the ovum wall is thin, then the male sperm will be able to burrow the coat of the ovum and the baby will thus be a boy. If the ovum wall is thick, the weak male sperm will not be able to burrow the coat, which will then be burrowed by the stronger female sperm and the baby will thus be a girl. In case the ovum wall is of an average thickness, then both the male and female sperms will have a chance to fertilize the ovum, as will be illustrated below in the detailed description.
[0016] The above-mentioned theory explains why some women give birth only to females while others give birth only to males or even to both sexes. It also explains some types of unexplained infertility where the couples have no health-related issues but no pregnancy occurs. Estimates show that about 7% of couples have unexplained infertility. In these cases, the wife has a thick ovum wall (5 layers or more) and the sperm count of the husband is in the lowest normal range. However, sperms cannot burrow the thick wall of the ovum. Accordingly, no fertilization occurs and the case is diagnosed as infertility because of the thickness of the ovum wall.
[0017] The second theory is named "cell fragility". It offers a solution and treatment for the complications of a thick/thin ovum wall. If the ovum is thick, the woman gives birth only to females and if the ovum is thin, she gives birth only to males. The theory also offers a solution for a number of chronic diseases for which there is no cure.
[0018] The theory depends on the scientific fact that water is responsible for perfusing the cells. If no enough water reaches the living cells, they suffer dehydration, causing cell fragility and weakness. If enough water reaches the living cells, they become stronger. This is the mechanism of action of the novel drug, according to the present invention.

Detailed Description of the Invention:

[0069] The following is an illustration of the Baby Love Male Capsules, the suggested concentrations of active ingredients thereof, manufacturing method thereof and the best way to use it:
Baby love male capsules consist of the following: Gelatin from which the two-piece hard gelatin capsule is made (000 size). It is extracted from animal bones and skin.
[0070] Plasticizers, such as glycerin and sorbitol
Humidity-absorbing agents, such as aluminum oxide
Conservatives, such as sodium citrate.
[0071] Sodium chloride is used as a tension neutralization agent, a lubricant and capsule extender. It also acts as a source of sodium and chloride since the body needs 5 to 12 g of them per day. A harmful dose of sodium and chloride reaches 1000 g per day, while a lethal dose reaches 2.5 g/kg per day (for mice).
[0072] The following steps increase the chances of having a male child:
[0073] I have noticed, during the research process, that ovulation in women with male babies occur early (on day 12 or 13), unlike women with female babies whose ovulation timing occurs later (day 16, 17, 18 or 19). The following research tackles this point:
In a 1995 article in Human Reproduction, Weinberg Baird, and Wilcox suggest that the length of the follicular phase (the time between menstruation and ovulation) is related to the sex of the baby. They suggest that cycles with shorter follicular phase lengths are slightly more likely to result in male babies, while cycles with longer follicular phases are more likely to result in female babies.
[0074] I think this relates to the thickness of the graafian follicle wall and the ovary wall. The ovum, as a result, takes a long time to be released. Ovums are released easier and earlier in women with thin ovary wall (ovulation days start from day 10 to 19 of menstruation). It has been scientifically proven that the ovum can be released during one of the three feminine hormonal waves: from day 10 to day 12, from day 13 to day 15, from day 16 to day 19 of menstruation respectively.
[0075] Is it possible that both ovaries differ in thickness?
It is well-known that women have a right and left ovary, each releases one ovum per month in turn. If one of them has a thinner wall and hence releases a thin ovum, the woman may get pregnant with a male child. If the other has a thicker wall and hence releases a thick ovum, the woman may get pregnant with a female child. Actually, some women give birth to a male baby in their first pregnancy and give birth to female babies in their second pregnancy and so on. The different thickness of both ovary walls is likened to the difference in both testes in 60% of men, where the left one is bigger and more drooping. However, more research is needed for this piece of information to be accredited.
[0076] Can one sperm fertilize the ovum?
Yes it can, if the ovum wall is thin and the sperm still retains its strength after its long journey for reaching the ovum, as illustrated in figure 4.
[0077] Women are advised to do the following:
[0078] Men are advised to do the following:
[0079] It has been scientifically proven that the sperms are produced in the testes during 62 days. They should be kept safe during this period by avoiding any thing that may harm them, such as:

(a) Gelatin: The material from which the two-piece hard gelatin capsule size 000 is made. It is extracted from animal bones and skin.

(b) Plasticizers: glycerin and sorbitol.

Sodium chloride is used as a tension neutralization agent, a lubricant and capsule extender. It also acts as a source for providing the body with sodium and chloride 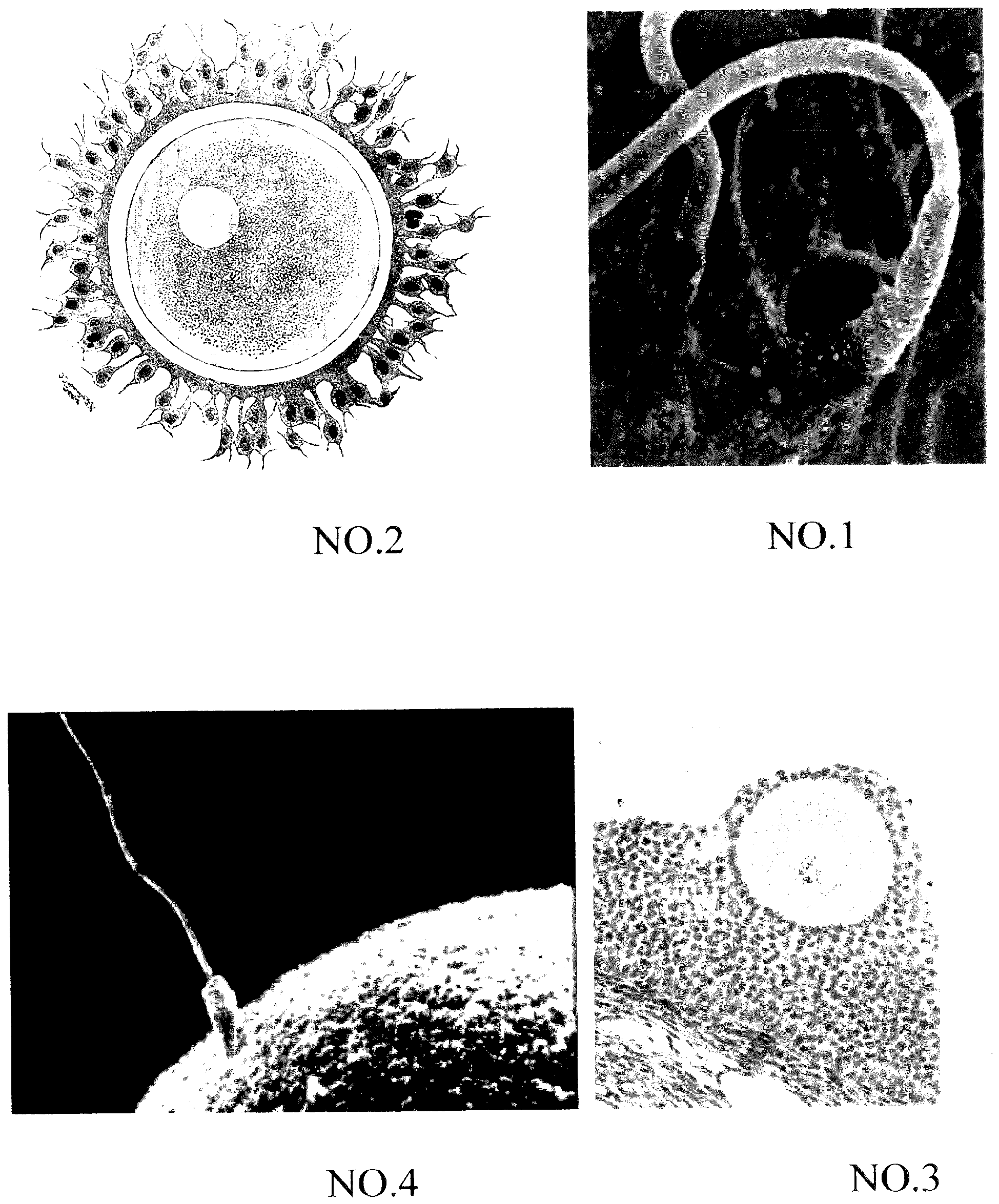 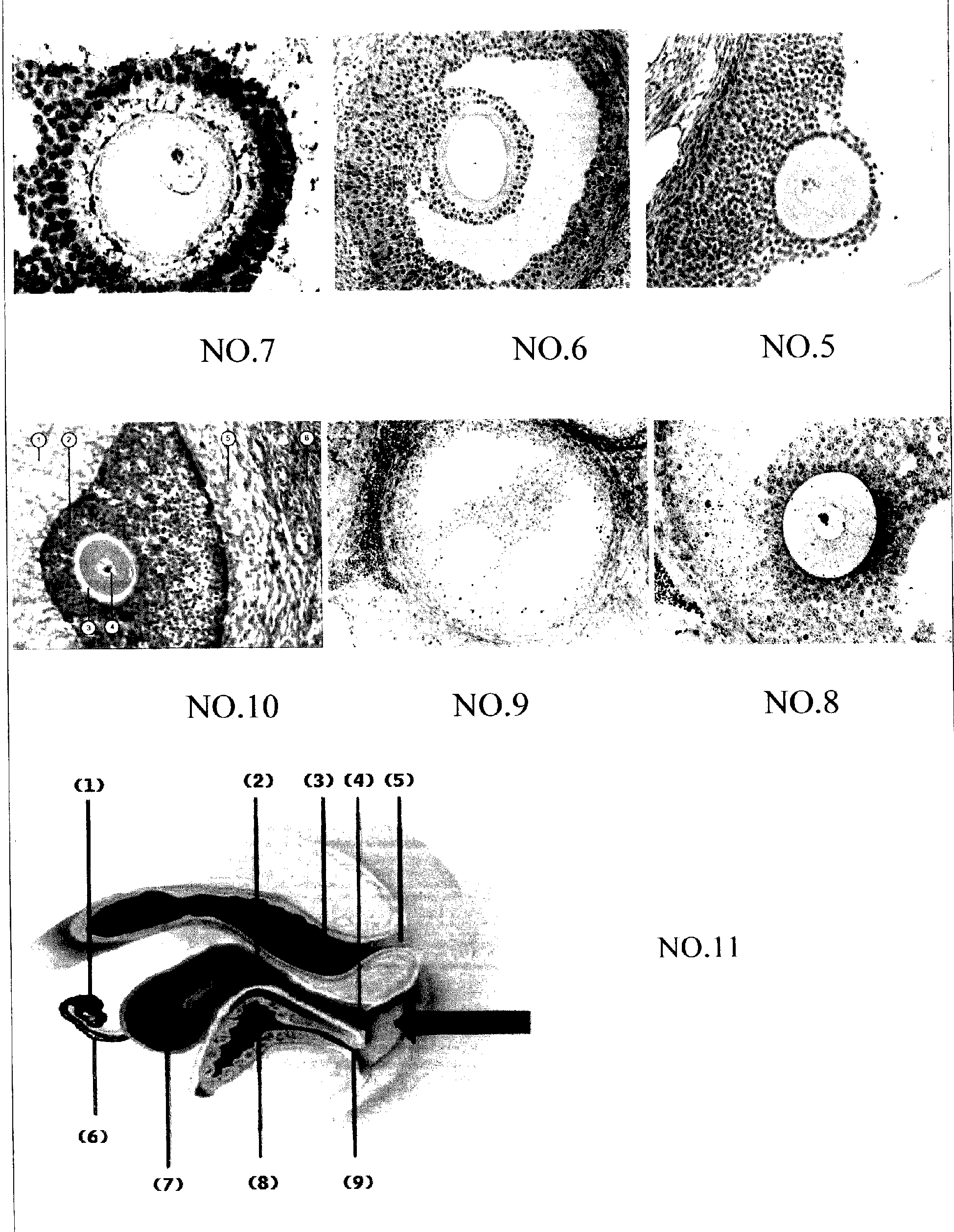