[0001] The present disclosure relates generally to fluid storage, and specifically to boss for a fluid containment container and a method for mounting the fluid containment container using the boss. A particularly suitable fluid containment container is a pressure vessel. A typical pressure vessel includes a load bearing outer shell and a fluid impermeable inner liner.
[0002] Suitable pressure vessel shell materials include metals, such as steel; or composites, which may include laminated layers of wound fiberglass filaments or other synthetic filaments bonded together by a thermal-setting or thermoplastic resin. The fiber may be fiberglass, aramid, carbon, graphite, or any other generally known fibrous reinforcing material. The resin material used may be epoxy, polyester, vinyl ester, thermoplastic, or any other suitable resinous material capable of providing fiber-to-fiber bonding, fiber layer-to-layer bonding, and the fragmentation resistance required for the particular application in which the vessel is to be used. Details relevant to the formation of an exemplary pressure vessel are disclosed in U.S. Patent No. 4,838,971, entitled "Filament Winding Process and Apparatus".
[0003] An elastomeric or other non-metal resilient liner or bladder often is disposed within the composite shell to seal the vessel and prevent internal fluids from contacting the composite material. The liner can be manufactured by compression molding, blow molding, injection molding, or any other generally known technique. Alternatively, the liner can be made of other materials, including steel, aluminum, nickel, titanium, platinum, gold, silver, stainless steel, and any alloys thereof. Such materials can be generally characterized as having a high modulus of elasticity. In one embodiment, the liner is formed of blow molded high density polyethylene (HDPE).
[0004] The composite construction of the vessels provides numerous advantages such as lightness in weight and resistance to corrosion, fatigue and catastrophic failure. These attributes are due at least in part to the high specific strengths of the reinforcing fibers or filaments. Such composite vessels are commonly used for containing a variety of fluids under pressure, such as hydrogen, oxygen, natural gas, nitrogen, methane, propane, and rocket or other fuel, for example. Generally, pressure vessels can be of any size or configuration. The vessels can be heavy or light, single-use (i.e., disposable), reusable, subjected to high pressures (greater than 344.7 kPa (50 psi), for example), low pressures (less than 344.7 kPa (50 psi), for example), or used for storing fluids at elevated or cryogenic temperatures, for example. Descriptions relevant to pressure vessels are presented in U.S. Patent No. 5,476,189, entitled "Pressure vessel with damage mitigating system".
[0005] Composite pressure vessels of the character described above originally were developed for aircraft and aerospace applications primarily because of the critical weight restrictions in such vehicles. As compressed natural gas (CNG) has become more widely used in ground-based vehicles such as buses and cars, however, the composite pressure vessel has become more widely used. The structural requirements of a pressure vessel are such that a generally cylindrical shape having rounded ends is a highly-desirable form factor from a standpoint of both strength and packing efficiency. However, the rounded shape can make securing such a pressure vessel to a vehicle difficult.
[0006] The neck of the compressed gas cylinder provides a structural protrusion suitable for attachment by a collar or similar device. Certain known designs make use of this feature to secure a gas cylinder. However, such designs suffer from a number of drawbacks. Some designs handle misalignment poorly and can place substantial stresses on the neck structure in the event of misalignment. Other designs inadequately secure the neck, so that there is a risk that the cylinder may detach from the mount under certain conditions. Moreover, in some cases, the cylinder can rotate about the principal axis of the cylinder, thereby placing stress on connection lines or other attached hardware.

[0010] The disclosed subject matter will be further explained with reference to the attached figures, wherein like structure or system elements are referred to by like reference numerals throughout the several views.

FIG. 1 is a perspective view of a prior art pressure vessel and mount assembly, with frame 302 shown as transparent for illustrative purposes.

FIG. 2 is an exploded perspective view of the boss and mount assembly of FIG. 1.

FIG. 3 is a cross-sectional view of the assembled boss and mount assembly, taken along line 3-3 of FIG. 1.

FIG. 4 is a perspective view of a pressure vessel with an exemplary embodiment of a boss of the present disclosure, wherein components of the boss are separated therefrom in an exploded view.

FIG. 5 is a cross-sectional perspective view of the exemplary boss, in exploded form, taken along line 5-5 of FIG. 4.

FIG. 6 is a cross-sectional perspective view of the boss of FIG. 5 with the components assembled together.

FIG. 7 is a cross-sectional view of a portion of the pressure vessel shown in FIG. 4, the section taken long line 5-5 of FIG. 4, with the components of the exemplary boss being assembled together, and further including a mounting pin by which the vessel can be mounted to exterior structures via the exemplary boss.

[0011] While the above-identified figures set forth one or more embodiments of the disclosed subject matter, other embodiments are also contemplated, as noted in the disclosure. In all cases, this disclosure presents the disclosed subject matter by way of representation and not limitation. It should be understood that numerous other modifications and embodiments can be devised by those skilled in the art which fall within the scope of this disclosure defined by the appended claims.
[0012] The figures may not be drawn to scale. In particular, some features may be enlarged relative to other features for clarity. Moreover, where terms such as above, below, over, under, top, bottom, side, right, left, etc., are used, it is to be understood that they are used only for ease of understanding the description. It is contemplated that structures may be oriented otherwise.

a pressure vessel (10) supported on the vessel mount;

characterized in that the system further comprises

a bearing (18) disposed at least partially within the first bore (26) and having a second bore (56) therethrough; and

the bearing (18) is spherical; and

the first bore (26) includes a surface (38) that is at least partially spherical and corresponds to an outer spherical surface (40) of the bearing (18).

the retainer (60) includes an inner end surface (58) configured to abut the shoulder (50).

the retainer (22) is configured to at least partially fit into the groove (62).

8. The system of any one of claims 1-7 wherein the attachment element (14) is configured as a pin.
9. A method for supporting a pressure vessel (10) having a boss (12) on a vessel mount, the boss (12) having a first bore (26) therein, a bearing (18) disposed at least partially within the first bore (26) and having a second bore (56) therethrough, the method including:

inserting a first portion of an attachment element (14) through the second bore (56) and a portion of the first bore (26); and

mounting a second portion of the attachment element (14) to the vessel mount.

10. The method of claim 9 wherein the bearing (18) is spherical, the method further including passing the first portion of the attachment element (14) through a retainer (22, 60) that keeps the bearing (18) at least partially within the first bore (26). 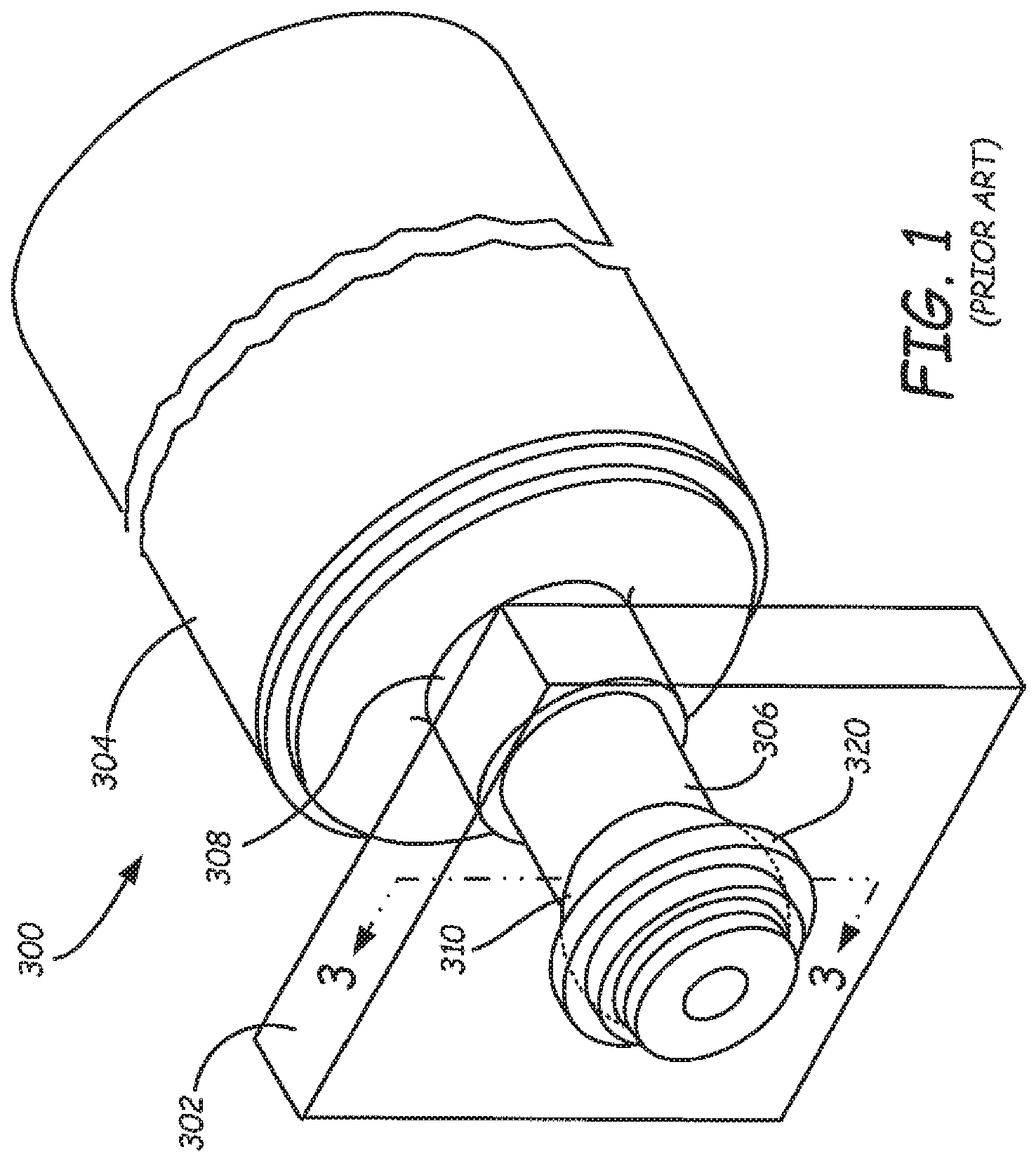 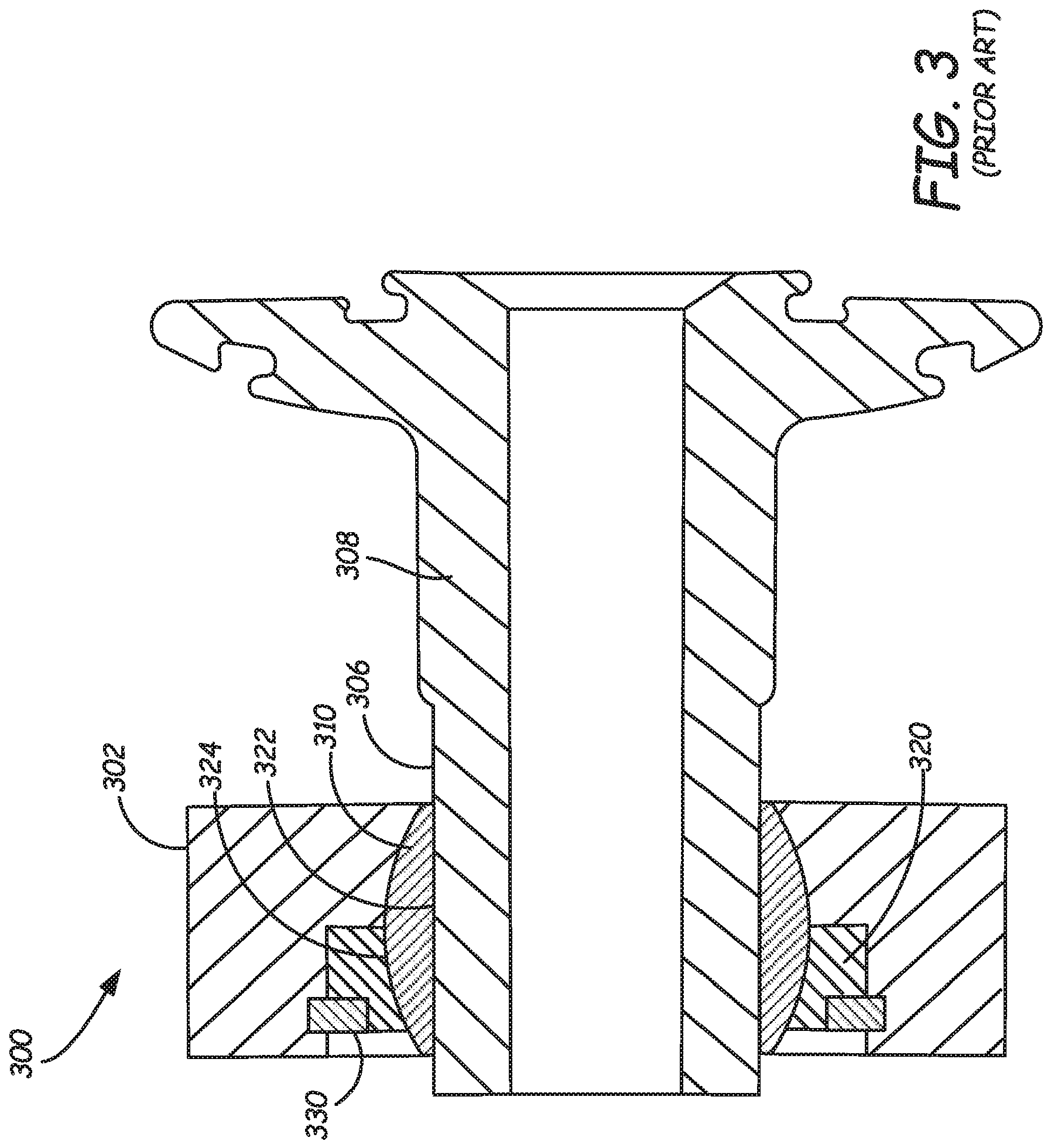 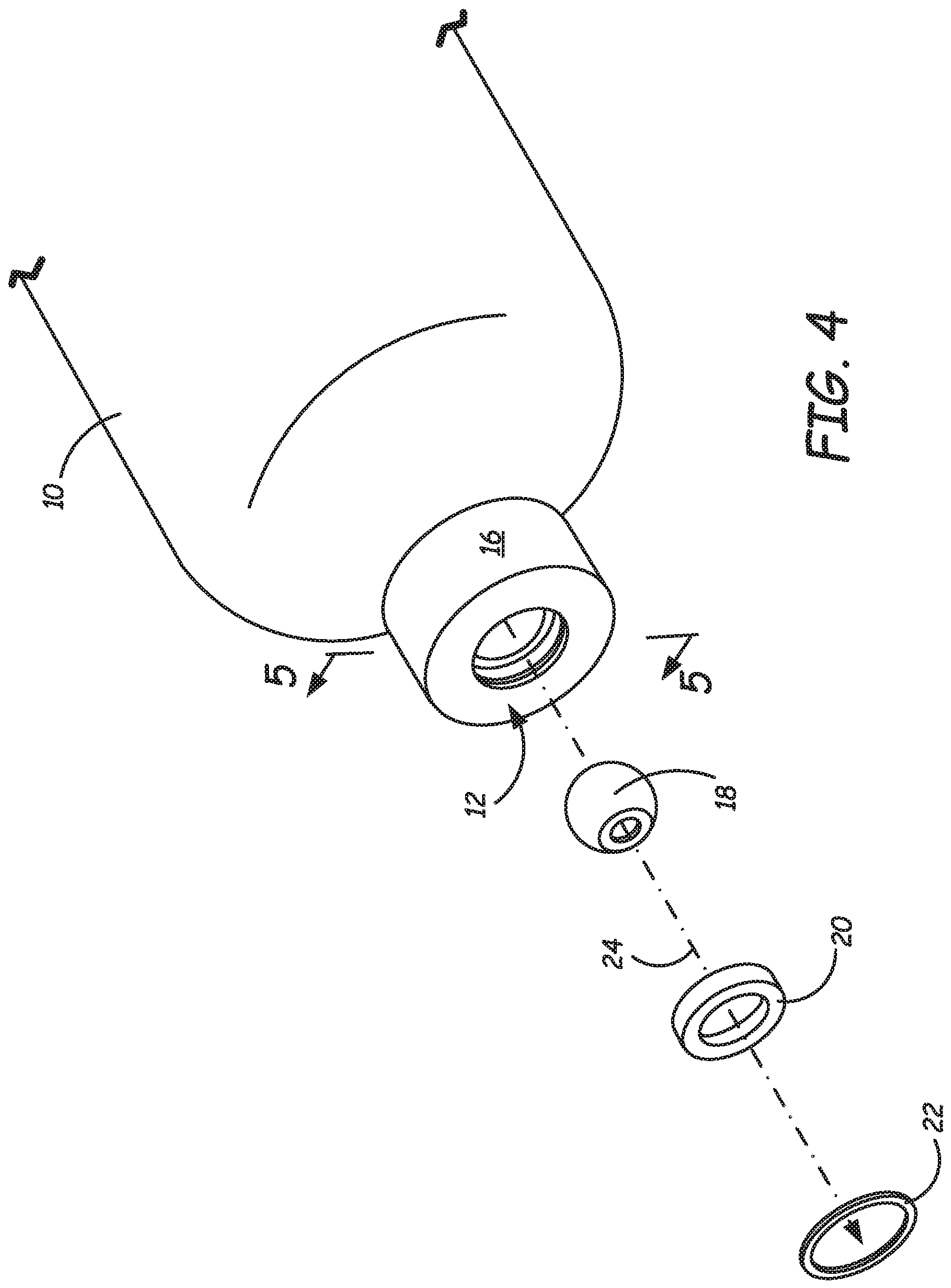 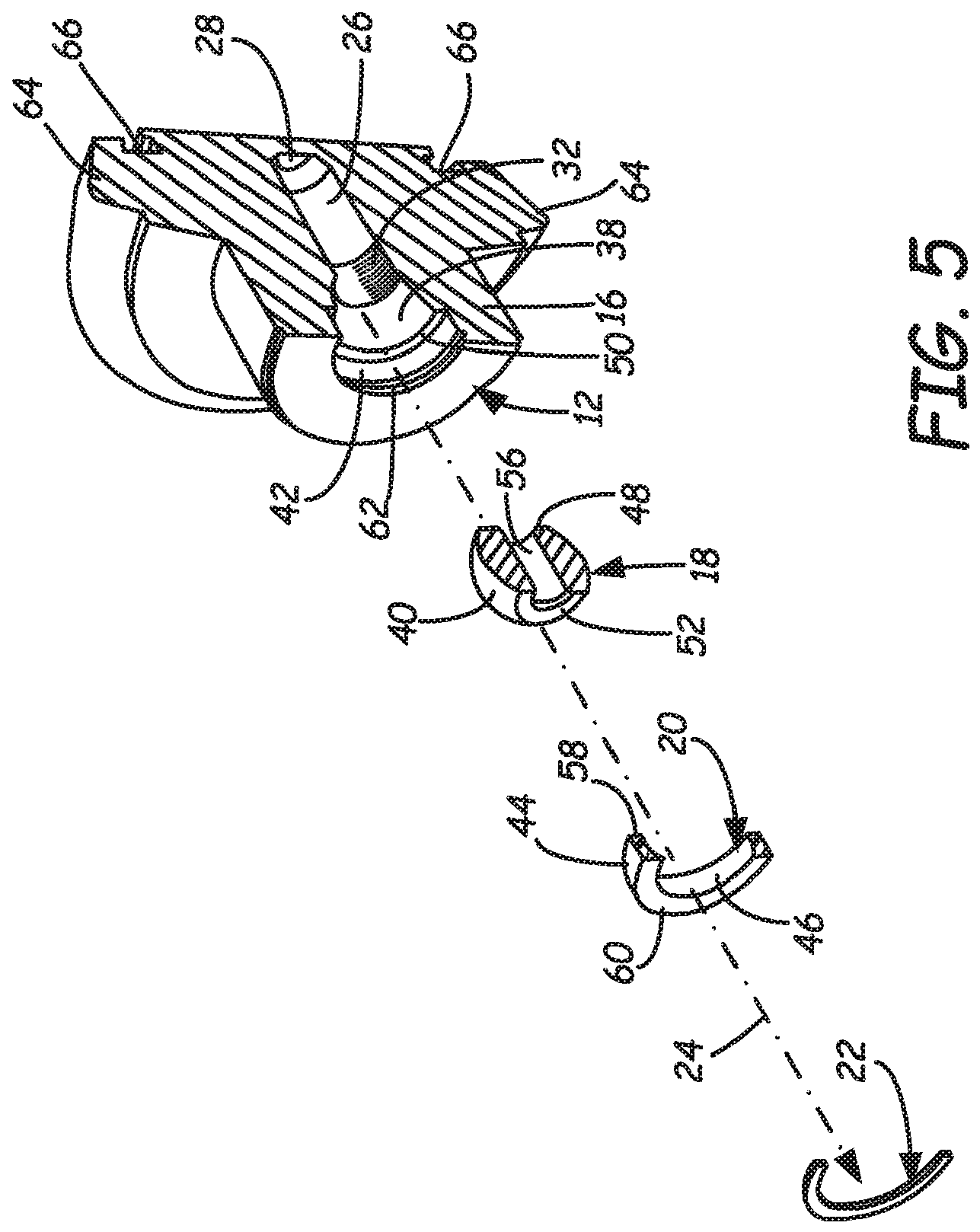 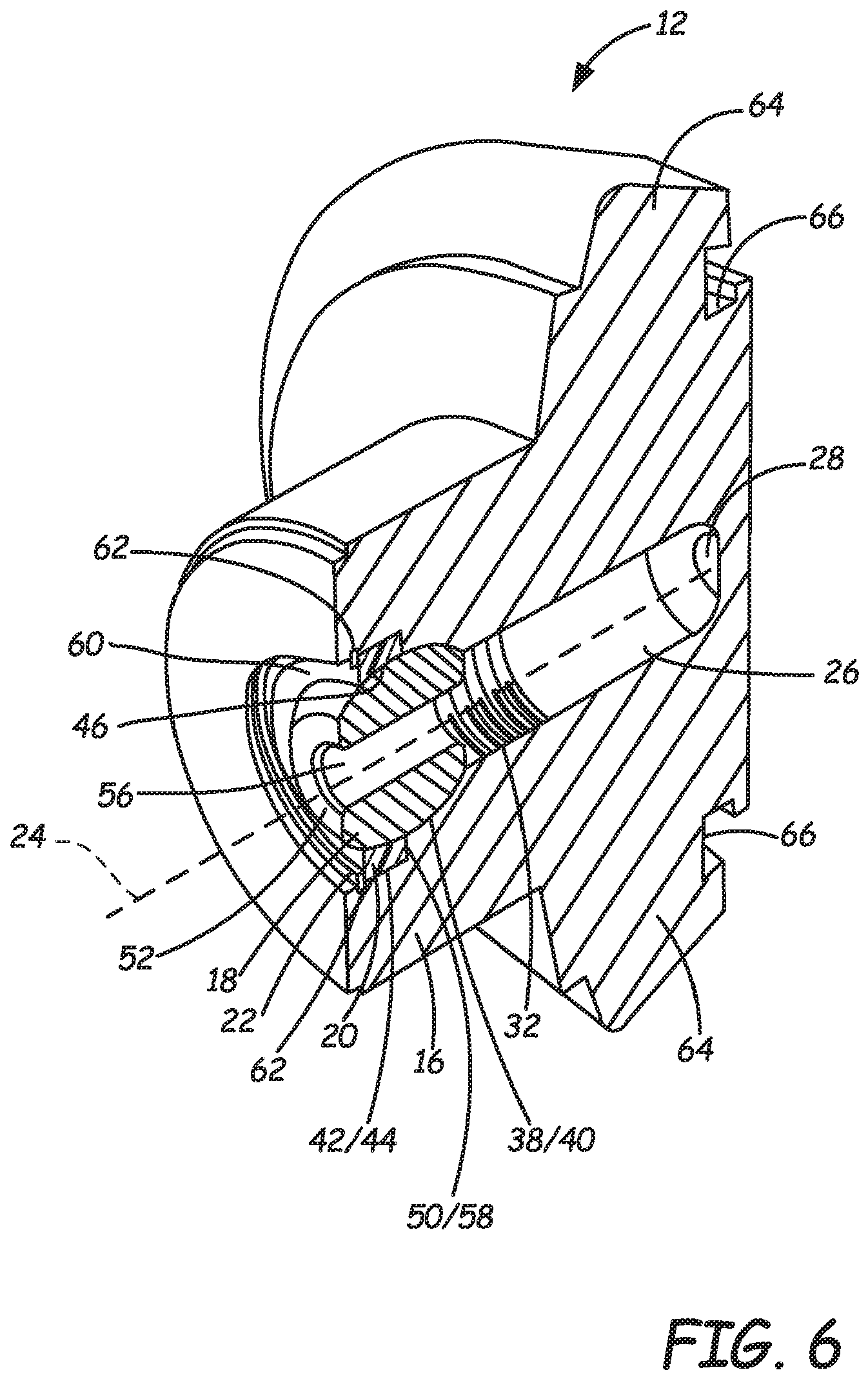 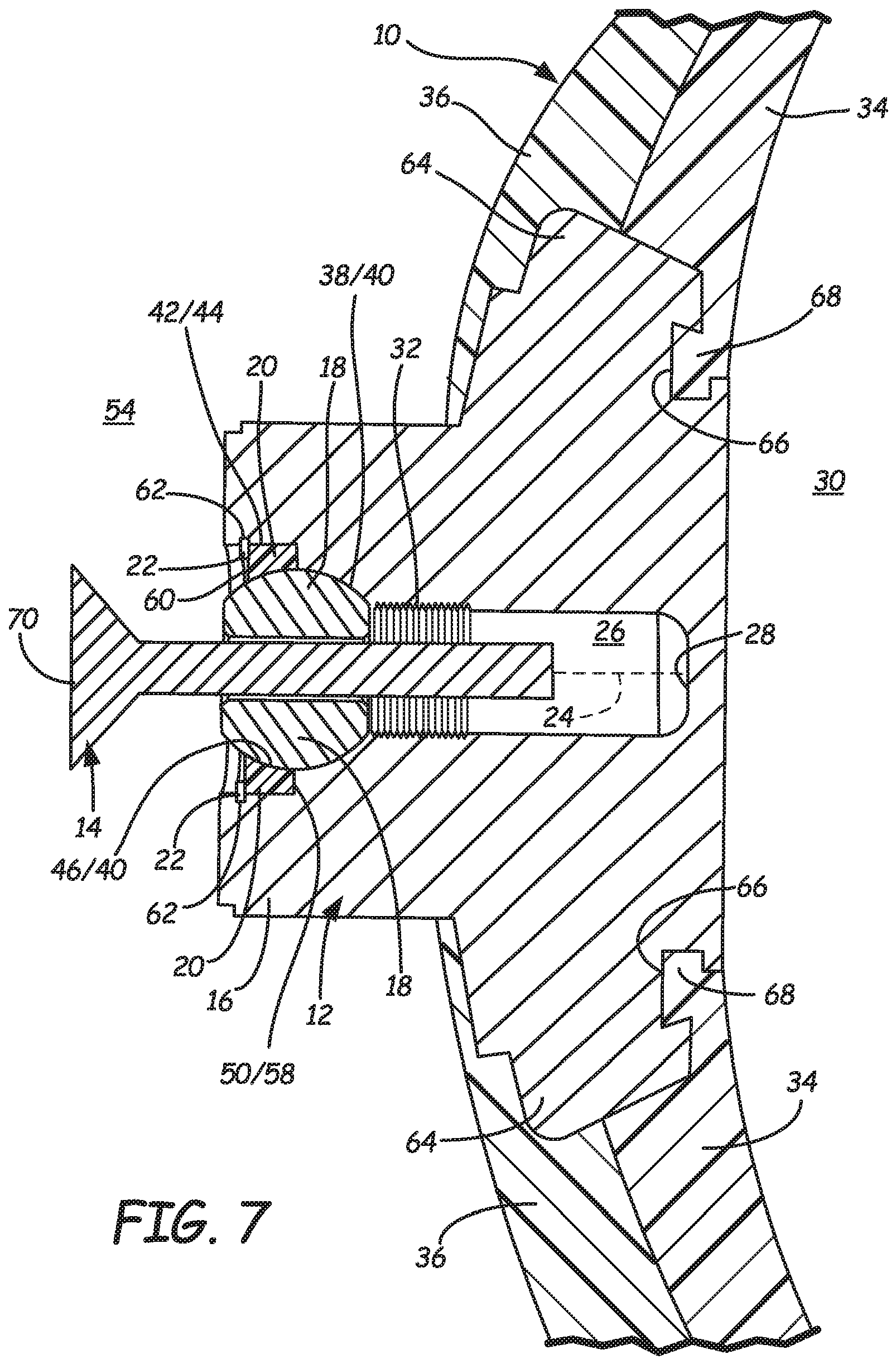