[0001] The words "pipe" and "tube" are used interchangeably here.
[0002] This invention relates to relatively small diameter pipes or tubes and in particular to tubular cores on which sheets of metal or other material can be wound for shipment, handling and dispersal. As used here, the word dispersal includes mounting a core and a sheet wound thereon on an uncoiler, then rotating the core to unwind the sheet and feed the sheet to apparatus for forming the sheet into other goods (beverage cans, automotive body parts, etc.).
[0003] Cores comprising paper or cardboard and glue are widely used for the above purposes. For example, beverage can stock material can be manufactured using cores which are formed to various diameters, for example, inside diameters of 16", 20" or 24", from paper fiber about 0.5" to 1" thick. These cores are non-recyclable and must be disposed of in dumps or landfills, with the attendant cost and detrimental impact on the environment. These cores can be crushed to facilitate storage and disposal, but this can be a problem because of their bulk and the difficulty in crushing them.
[0004] Tubes or pipes formed from metal strips are known in the art. See, for example, commonly assigned US patent nos. 3,940,962 and 3,247,692 in the name of Paul K. Davis, which disclose the so-called three-roll free forming method and apparatus for forming pipes. According to these patents, an elongated strip of metal is advanced in a generally planar path along its longitudinal axis and into forming stands which form the strip into a profile, then the profiled strip is fed into a tube forming machine at which the strip is curled or wrapped between three sets of rollers (lead, mandrel and buttress rollers) into helical tubes. The sets of rollers extend in rows at an angle relative to the longitudinal axis of the incoming strip, the helix angle, which is so related to the radius of the helical convolutions and the width of the incoming strip that the trailing edge of a preceding portion of the strip converges into contact with the leading edge of the following portion of the strip. The '962 patent also teaches diameter control. The tubes formed in accordance with the '692 and '962 patents are used in a variety of applications. US patent nos. 3,940,962 and 3,247,692 are hereby incorporated by reference in their entirety.
[0005] Metal tubes or pipes have the potential for use as small diameter recyclable cores, but to date their use has been limited because of the difficulty of forming metal into small diameter tubes. For a given sheet thickness, smaller diameter tubes require greater force to deform the sheet and form the pipe. Also, decreasing the thickness of the tube wall (the thickness of the tube-forming sheet or strip) increases the tendency to buckle. In addition, it is more difficult to control the diameter and to maintain a consistent lockseam as the tube is formed.
[0006] Commonly assigned US patent no. 5,074,138 in the name of Robert F. Miller describes an improvement of the invention disclosed in incorporated US patent no. 3,247,692. The improvement involves the design and manufacture of a lockseam pipe which has a corrugated, sinusoidal profile comprising arcuate/semi-circular ridges and grooves, and which is adapted for improving the physical characteristics of the pipe and the strength of the lockseam. US patent no. 5,074,138 is hereby incorporated by reference in its entirety.

[0007] The present invention is embodied in the structure and manufacture of a thin wall bellows tube or pipe which is formed from a metal strip having a rectangular ribbed profile. In one aspect the tube is used as a core onto which a sheet of material can be wound or coiled for shipment, handling and dispersal. In a particular aspect this invention relates to the structure and manufacture of such a core from strips of metal and, more particularly, from a thin strip of metal such as aluminum.

Fig. 1 is a transverse cross-section of a metal strip having a rectangular corrugated transverse profile formed therein in accordance with the present invention, and preparatory to the strip being helically wound into a tubular core.

Fig. 2 depicts a strip such as that of Fig. 1 being wound into a helical tubular core.

Figs. 4-13 depict the changes in the profile of a strip or sheet at sequential stages of the profile-forming process.

[0009] The pipe forming in accordance with the present invention can be achieved via fixed forming using a forming shoe with a predetermined inside diameter to provide the desired pipe diameter, or by free forming using several sets of roller dies of different sizes to achieve pipes of different diameters, by adjusting the helix angle or by a combination thereof.
[0010] The illustrative equipment and process described here use, and are improvements of, the multi-pass roll former, three roll, free forming system disclosed in commonly assigned and incorporated US patent nos. 3,940,962 and 3,247,692 as specifically adapted to bellows pipe (relatively small diameter corrugated pipe) in commonly assigned and incorporated US patent no. 5,074,138.
[0011] According to the present invention and referring to Figure 1, initially a flat metal strip or sheet is roll-formed to a desired profile.
[0012] Referring to Figures 4-13, according to the present invention, a flat metal strip or sheet is passed through multiple stands of forming rolls to initially form rectangular features and/or straight line segments of rectangular features and to progressively add to and refine these segments and features to form the desired rectangular ribbed profile. More specifically, Figures 4-13 depict the sequence of changes in the strip profile starting with the initial flat strip profile and progressing through the finished rectangular ribbed profile. The ten Figures 4-13 depict the associated profiles 40-49 after the strip is driven through each of the ten stands of forming rollers. Illustratively, ten passes through roll-forming stands are used to form the profile.
[0013] The above profile-forming method results in the profile 10 shown in Figure 1 which comprises alternating rectangular ribs in the form of rectangular ridges 11 and rectangular grooves 12. The ridges 11 have flat top or upper surfaces 13 and the grooves 12 have flat bottom or lower surfaces 14. A downward (or upward) opening flange or tab 16 is formed extending along one longitudinal edge of the strip or sheet transverse to the width of the strip and an opposite opening upward (or downward) extending tab 17 is formed extending along the opposite longitudinal edge of the strip.
[0014] To form the profiled strip into a tube or core, and referring to Figure 2, the rectangular-ribbed profile strip or sheet 10 is wrapped using helical foorming apparatus into a cylindrical pipe or core 20 of the desired diameter and, as shown in Figure 3, the mating tabs 16 and 17 are compressed together to form a four-ply interlocked helical seam 21 which wraps around the pipe lengthwise along the pipe. The strip edges are held together via a continuous mechanical lockseam which is pushed together to lock the lockseam.
[0015] In the formed pipe 20, the spaced-apart adjacent flat surfaces 14 of the rectangular grooves/ribs 12 form the outside surface 22 of the core 20 and the spaced-apart flat surfaces 13 of the rectangular ridges/ribs 11 form the inside surface 23 of the core.
[0016] The strip 10 illustrated in Figure 1 is symmetrical top-to-bottom and thus can be reversed top-to-bottom during the pipe wrapping process depicted in Figure 2. Then the spaced-apart flat ridge/rib surfaces 13 form the outer surface 22 of the core and the spaced-apart flat groove/rib surfaces 14 form the inside surface of the core.
[0017] Referring to the Figure 3 cross-section of the core 20 depicted in Figure 2, in the pipes made in accordance with the present invention, the ridges and grooves maintain their generally rectangular, ribbed shape and form an open structure with spacing between the adjacent ridges 11 as well as spacing between the adjacent grooves 12. This is unlike prior designs which use non-rectangular shapes and/or an additional deformation step to form a continuous outer surface in order to provide the required strength and integrity and to provide ample flat surface area for sheet support. The outer surface is interrupted by the spacing of the inside rectangles. In a present embodiment, the width of the ridges and the grooves, and the spacing between adjacent ridges and between adjacent grooves, are all equal.
[0018] Embossments or reinforced embossments can be formed in the ribs, e.g., in the vertical legs of the ribs, to provide additional strength to the core.

[0019] The above design and method have been used to form cylindrical cores of different sizes.
[0020] Specifically, in strips or sheets 10 of aluminum which were 0.010" to 0.023" thick and 3 5/8" wide, ridges 11 and grooves 12 were formed which were 0.27" in height from the top of the a ridge to the bottom of the adjacent groove. Both the ridges and the grooves were 0.27" wide and were spaced apart 0.27" from adjacent ridges and grooves, respectively. See Figure 1. The rectangular corrugated strips or sheets 10 were fed to three-roll apparatus using helix angles ≥ 60° measured from the axis of the outgoing pipe to form continuous length pipes of 16", 20" and 24" inside diameters. The pipes 20 were then cut into various lengths for use as recyclable cores onto which sheets of metal such as aluminum were to be wound for handling and dispersal.
[0021] Other dimensions and materials will be readily adapted to the invention described here by those of usual skill in the art. For example the invention can be used to form pipes approximately 6" in diameter and greater. For a given sheet width, increasing the helix angle increases the pipe diameter. For a given pipe diameter, increasing the sheet width reduces the required helix angle. Increasing the strip width tends to increase the pipe wrapping/manufacturing speed and to decrease the number of seams in a given length of pipe.

1. A method for forming a metal strip into a cylindrical core, comprising:

passing an elongated metal strip having width and length and opposite longitudinal edges through a multiplicity of forming stands which form rectangular components and generally straight segments thereof in said strip and change the size and shape of the segments and components previously formed at said forming stands, wherein upon the completion of the corrugation forming process the strip comprises longitudinally extending, alternating ridges and grooves having generally vertical spaced-apart sidewalls with the ridges further comprising longitudinally extending, flat, spaced-apart top surfaces extending between adjacent ridge sidewalls and the grooves further comprising longitudinally extending, flat, spaced-apart bottom surfaces extending between adjacent groove sidewalls, the flat ridges and flat grooves together forming a rectangular, flat ribbed cross sectional profile extending along the width of the strip transverse to the length thereof;

forming the opposite longitudinal edges of the as-formed corrugated metal strip into flanges adapted for forming an interlocking seam;

helically coiling the as-formed corrugated strip into a cylinder having a longitudinal axis and an outer surface defined by flat, spaced-apart surfaces selected from the top surfaces and the bottom surfaces; and

compressing the opposite edge flanges together thereby forming an interlocking seam extending in a spiral around the cylinder along the longitudinal axis thereof.

3. The method of any of claims 1 and 2 wherein during the helical coiling step, the metal strip is oriented at a helix angle of approximately 60° or greater relative to the longitudinal axis.

4. The method of any of claims 1 and 2 wherein during the helical coiling step, the metal strip is oriented at a helix angle relative to the longitudinal axis selected for forming a cylinder having a diameter of at least approximately 6".

a lockseam of joined opposite edges of the metal strip, the lockseam extending in a spiral around the cylinder along the longitudinal axis thereof.

7. The core of any of claims 5 and 6 wherein the pipe diameter is at least approximately 6". 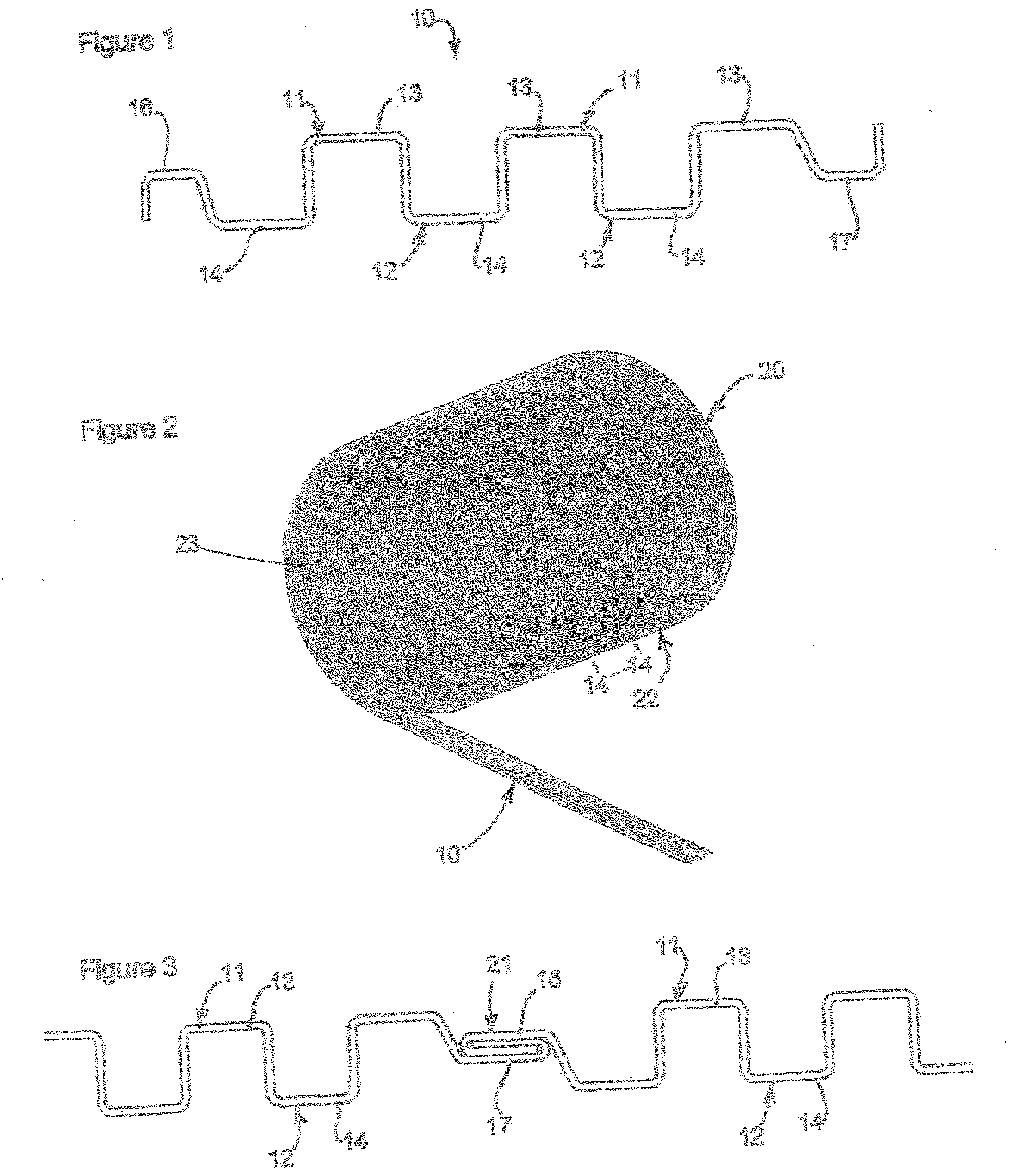 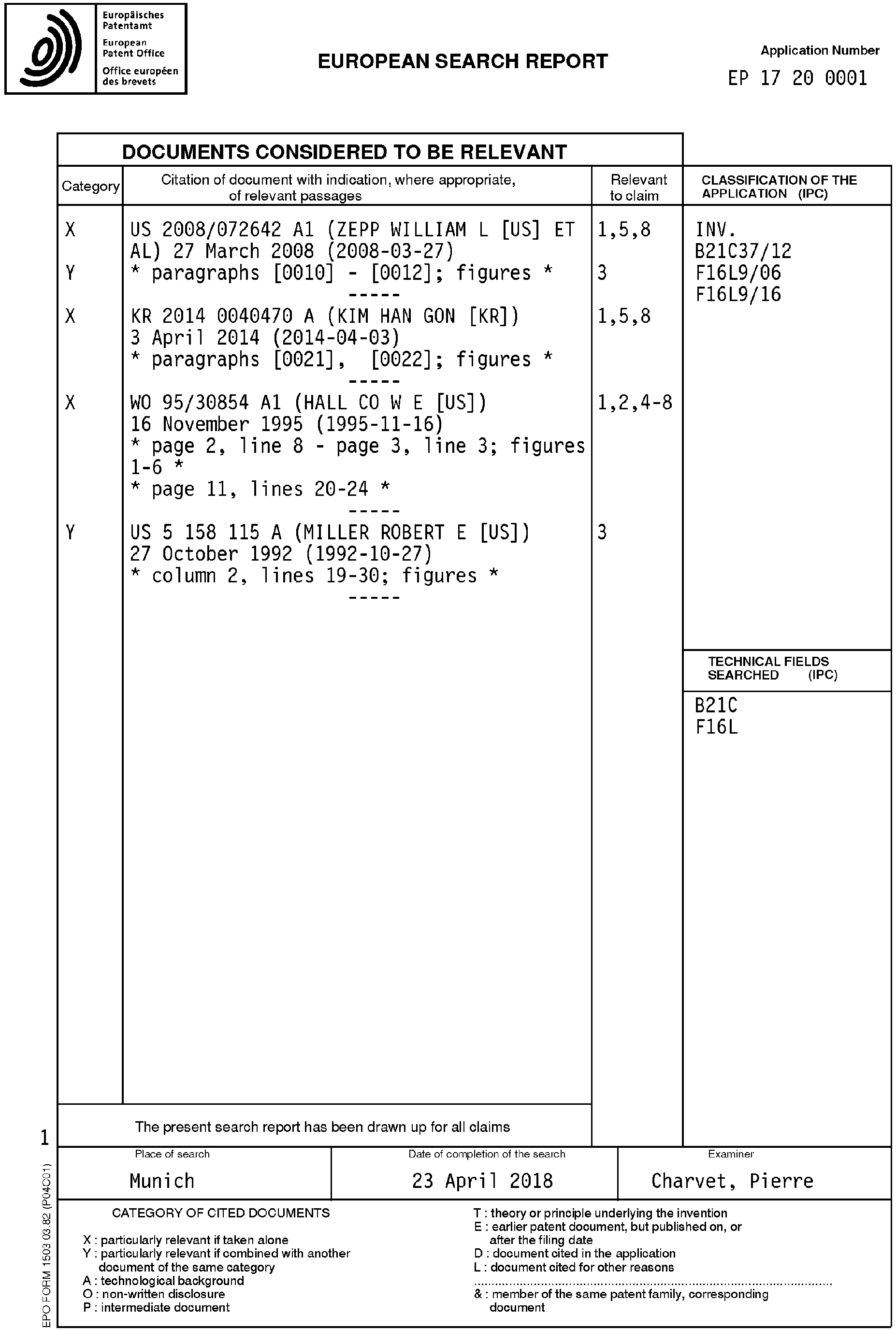 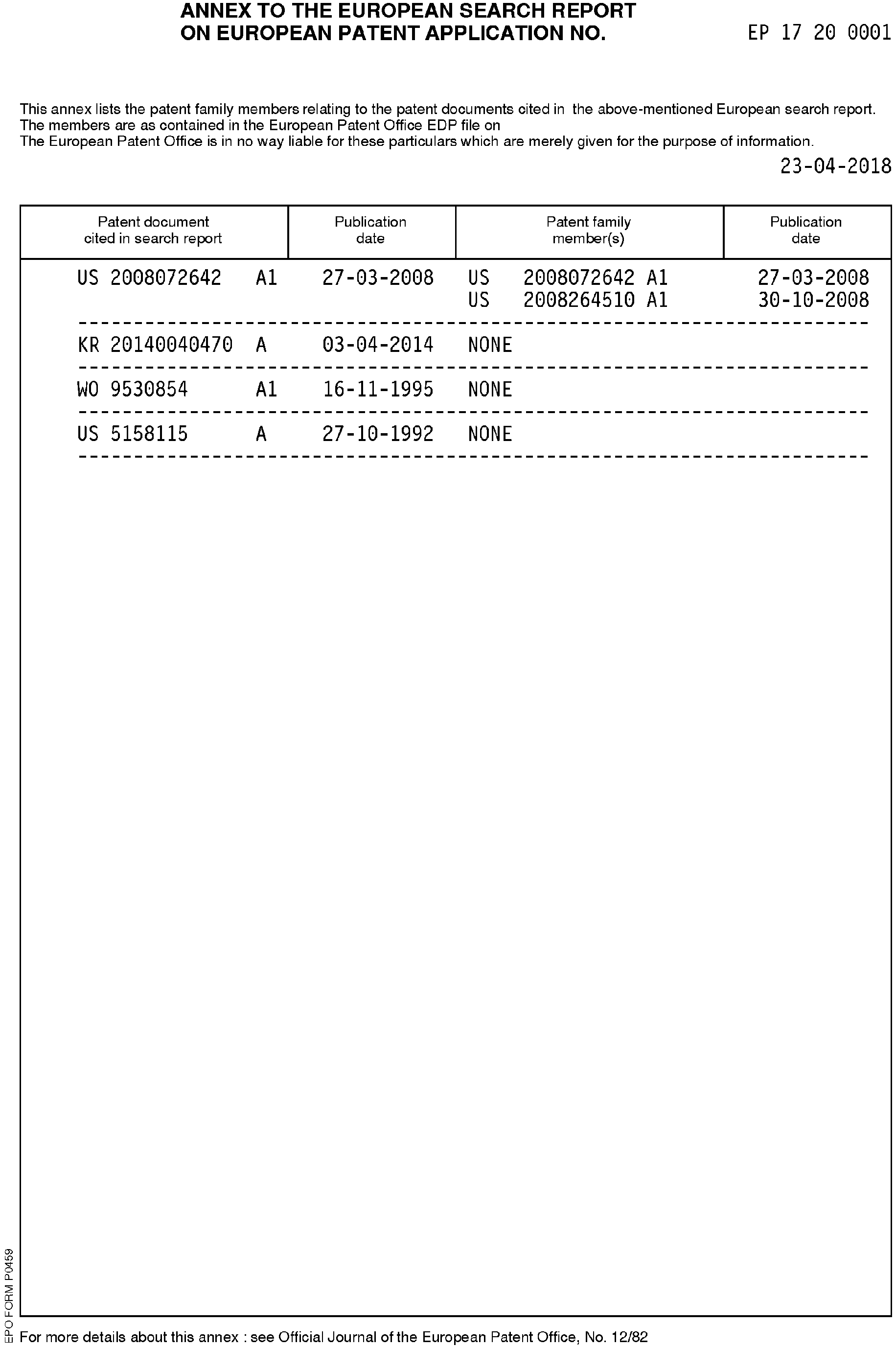