[0001] The present invention is directed to improvements in smoking devices, particularly to smoking articles which employ a formed tobacco cartridge as a source of producing vapor by heat transfer to the cartridge by conduction, convection, and radiation for smoke and flavor. The present invention relates to self-contained vaporization devices, and more particularly, to a low-temperature vaporization device for use of tobacco product. The device is of an elongated main body with a mouthpiece at one end and an attached tubular casing at the other end having a vaporization chamber and a heater. The mouthpiece and the casing form a unitary unit.

[0002] Smoking devices, such as cigarette holders and pipes are well known in the art for providing flavored vapor from a smokeable substance to a user for therapeutic and smoking pleasure. However, existing devices used have no control of heating and combustion of the tobacco products. The devices tend to produce toxic, tarry and carcinogenic by-products which are harmful and also impart a bitter and burnt taste to a mouth of a user.
[0003] A further problem is that there is no control of contamination of the inhaled vapour mixture with heater exhaust gases, due to inappropriate proportioning and location of the inlets and the exhaust vents. Typically, the exhaust gas is used to directly heat the tobacco, and those gases contain harmful by-products of incomplete combustion.
[0004] In an effort to overcome these deficiencies, there have been numerous attempts to provide a device structure and the substance for producing vapor for smoking which is free from harmful by-product and would provide a cool and soothing vapor for smoking.
[0005] For example, U.S. Patent Application No. 2004/0237974 A1, published on Dec. 02, 2004 for Min discloses a filtering cigarette and cigar holder which removes tar and nicotine from the tobacco smoke.
[0006] U.S. Patent Application No. 2004/0031495 A1, published on Feb. 19, 2004 for Steinberg discloses a vaporization pipe with flame filter which uses a flame to vaporize the smoking substance.
[0007] U.S. Pat. No. 6,164,287, issued Dec. 26, 2000 to White, describes a smoking device which produces smoke from tobacco at low temperatures, without producing harmful by-products.
[0008] U.S. Pat. No. 4, 848, 374, issued Jul. 18, 1989 to Chard et al describe a smoking device to vaporize aerosol precursor, an event which precedes condensation to mainstream aerosol precursor by contact with heated surface rather than by hot gases into the mouth of a smoker.
[0009] U.S. Pat, No. 4,219,032, issued Aug. 26, 1980 to Tabatznik et al describe a smoking device wherein an extracted smoke is cooled by passing it through a suitable liquid to provide a soothing smoke.
[0010] U.S. Pat. No. 4,020,853, issued May 03, 1977 to Nuttall, describes a smoking pipe made of ceramic material such as colored and ornamental porcelain for enhancing the artistic look, and also to provide a circulating air to keep the outer wall of the pipe cool and safe for handling.
[0011] U.S. Pat. No. 3,792,704, issued Feb. 19, 1974 to Parker, describes a pipe tobacco smoking system, wherein the pipe and the tobacco capsule are mutually designed to yield a slim-line smoking combination that can be manufactured from relatively low temperature thermo-plastic material.

[0012] The present invention is drawn to a novel smoking device
[0013] International publication WO 03/082031A1 discloses a vaporization pipe that uses a flame for vaporizing substances from smoking materials such as tobacco. In the disclosed pipe the heating element lacks to be enclosed in a case of the pipe and rather is exposed to surrounding air. Instead, a filter housing, which may have a hollow space to provide low thermal conductivity, is located adjacent to the heating element and contains a flame filter. as described in the appended claims.
[0014] The present invention will become readily apparent upon further review of the following specifications and drawings.

FIG. 1 is a side view of a portable vaporization device, according to a preferred embodiment of the present invention.

FIG. 2 is a sectional view of the same embodiment.

FIG. 3 is a perspective view of a heater, according to the same embodiment.

FIG. 4 is a cutaway view of an alternate embodiment according to the present invention.

FIG. 5 is a sectional detail view of a tobacco cartridge, according to the preferred embodiment.

FIG. 6 is a perspective view of a tobacco cartridge, according to the preferred embodiment.

FIG. 7 is a sectional detail view of a tobacco cartridge, according to an alternate embodiment.

FIG. 8 is a sectional detail view of a tobacco cartridge, according to an alternate embodiment. 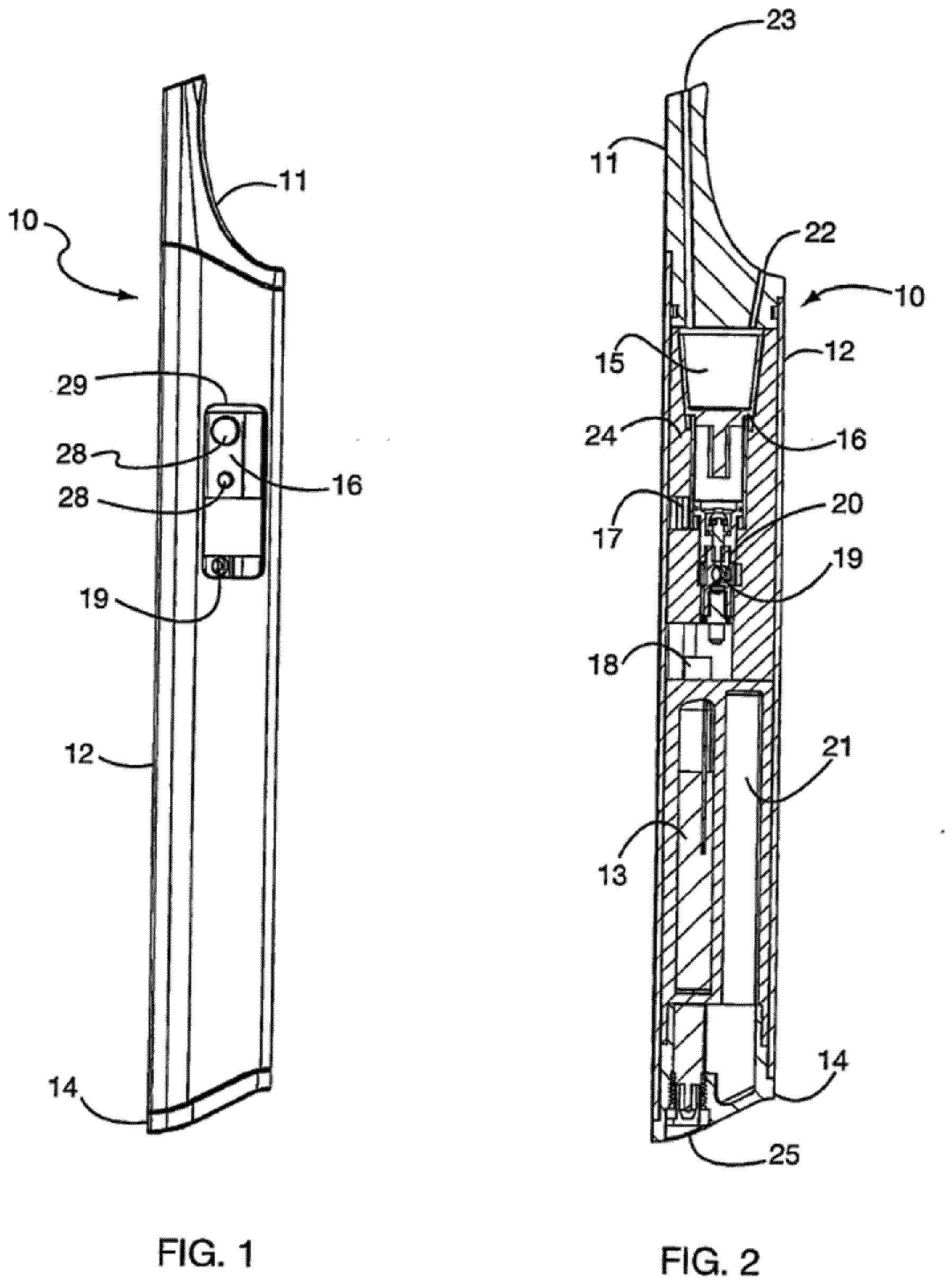 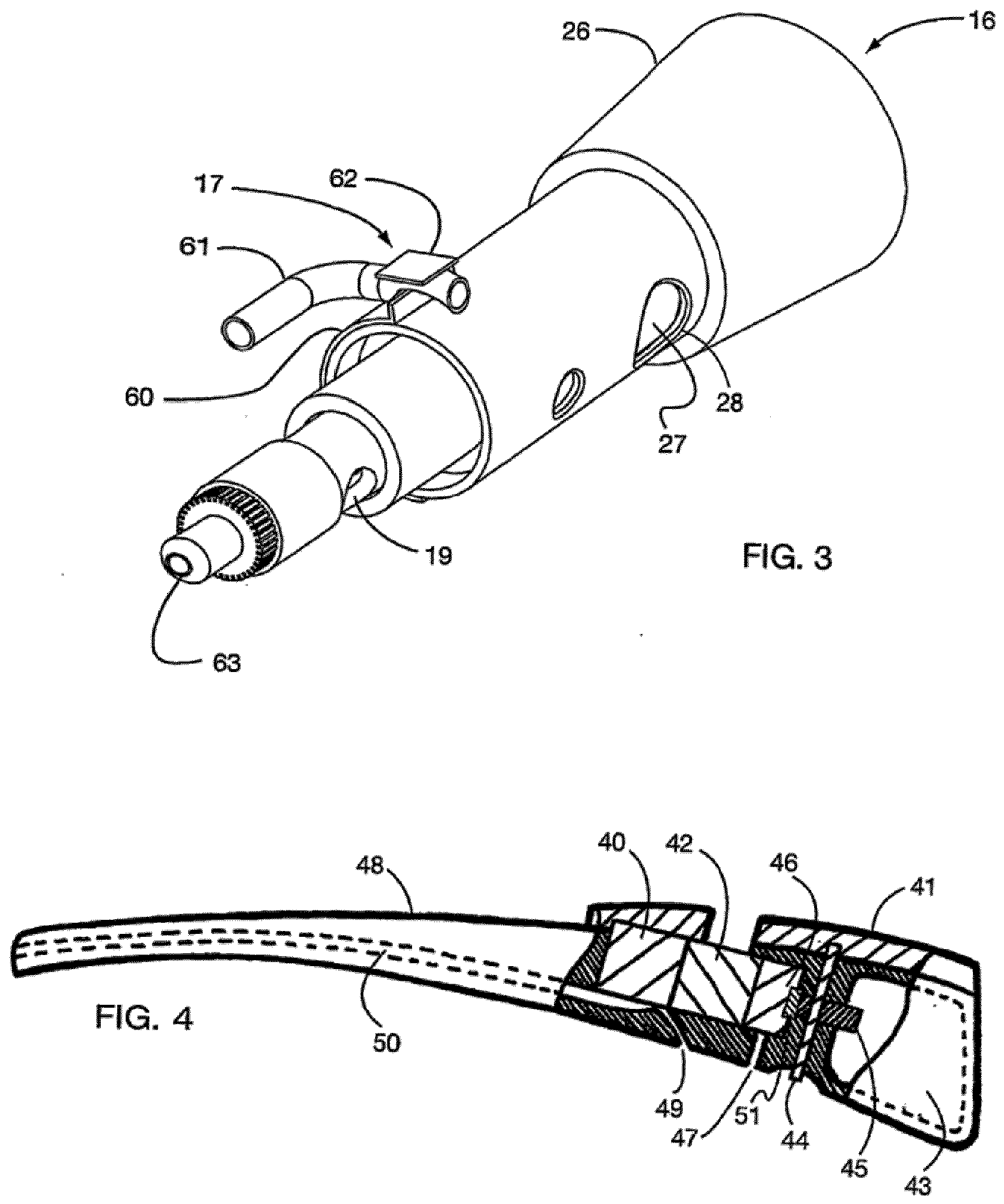 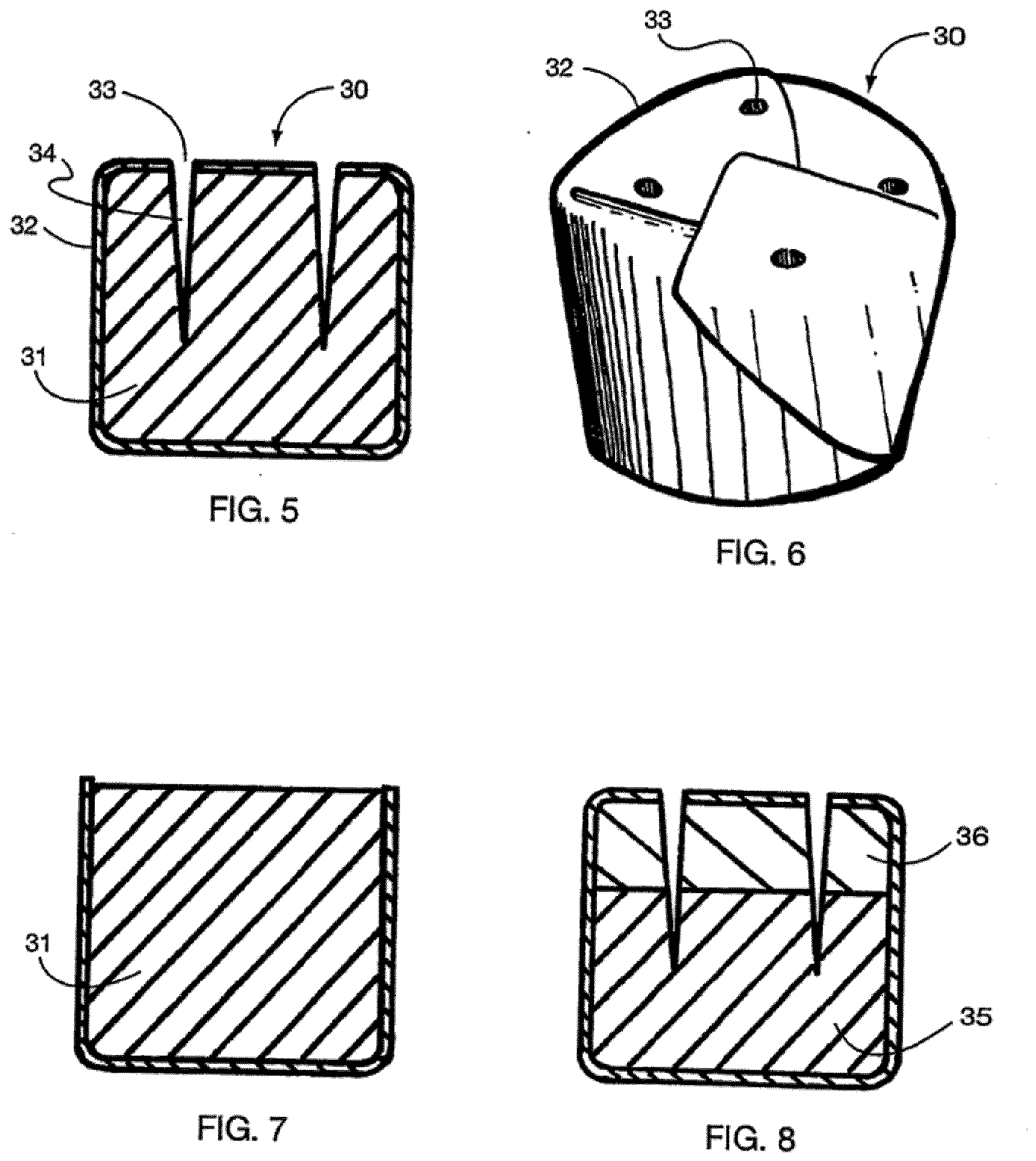