[0001] This invention relates to a vibration pad or module and a compression wrap for releasable attachment to the pad. Both are designed for vibration therapy of muscles and joints afflicted with aching, soreness or injury.

[0002] Both vibration therapy and compression wraps for muscles and joints have been around for some time, and both have been used with some degree of therapeutic success. While there are available massaging devices for muscles and joints, their success, or lack of it depend greatly upon their combined effectiveness, that is both the effectiveness of the wrap and the effectiveness of the vibration therapy. Each affects the other and collectively they affect the therapeutic success of the device/wrap in question.
[0003] With miniaturizing of vibration inducing modules the ability to be far more creative in developing vibration modules and wraps that affectively penetrate muscles and joints with vibrations and/or pulsations has increased tremendously. For examples of vibration wraps and or gloves, see the commonly owned and assigned U.S. Patent Brown et al. 9,775,769 issued October 3, 2017. The Brown U.S. Patent '769 relates to particularly to an orthotic compression glove for massaging the fingers and digits. It uses coin motors with a rechargeable battery, with the unit embedded in a stretchable compression glove. For an example of a vibration knee wrap, one may look to Waldon U.S. Patent 8,753,299 for massaging knees with a compression wrap that utilizes vibrating motors surrounding the kneecap.
[0004] Holding vibrating motors in a fixed location in a wrap regardless of the flexing of a joint to many different orientations offers some difficulty. That is to say, to enhance the vibration effectiveness the coin motors need to be juxtaposed closely to the muscle or joint in a correct orientation.
[0005] For the above reasons, some efforts have been made to produce vibration modules to flex with a moving joint for example of an athlete. In this regard see published PCT application, international publication number WO2016/051414A1, published April 7, 2016. The corresponding publication, or more accurately corrected publication of the corresponding U.S. application is U.S. 2016/0302996, published October 20, 2016. It relates to a wearable vibration device that employs a soft wearable module to deliver high energy vibration deep in the muscle and soft tissue when placed inside a liner. It is lined up with holes of an alignment wrap and Velcro straps are then tensioned to hold the wearable module against the skin. The problem is such units do not hold firmly and alignment can be jostled out of place, particularly by vigorous athletic motion. WO2015/l01790 discloses a vibration wrap or pad for use with a coin motor. US2014/066925 discloses a glove with a vibration motor and a switch for operation of the same. US2016/0051439 discloses a vibrating mask.
[0006] With the developing coin motor technology and compression wrap technology there has been demonstration of a particular need for an improved flexible module or pad that will allow the pad to flexibly bend with the limb or joint to keep the vibrating motors tightly positioned against the wearer's skin, even in athletic movement.
[0007] Further there is a need for a unit which allows modification of the vibration frequency in a range of low to high and if deemed necessary even pulsed.
[0008] Further, there is a need for a vibration pad that can be attached to a compression wrap in a manner which assures that the orientation will constantly be the same when the two are combined together, thus providing assurance that proper and consistent orientation is achieved with each application of the wrap to a patient.
[0009] A primary objective of the present invention is to fulfill the above needs. Particularly the above mentioned specific needs are fulfilled by a unit having a bottom and top housing made of flexible polymer capable of translating vibration throughout the unit and from there directly to soft tissue or joints of a patient.
[0010] An important further feature addressed in the present invention is the arrangement of the array of motors arranged in a radial pattern surrounding the targeted pain area and the attachment technique involving a vibration pad pressed fit into a grommet secured to the wrap with the orientation of the grommet assuring that the vibration module is properly placed. It is therefore assured as secure and in a consistent and correct location.

[0011] A vibration wrap, comprising: a vibration module having a housing, a rechargeable battery with an on/off switch in said housing, a compression joint wrap with a click in - click out grommet secured to said wrap; said grommet being adapted to removably secure said housing to said compression joint wrap, a plurality of flexible arms radiating outwardly from said housing, each arm terminating in a coin motor which is electrically connected to said rechargeable battery via electrical wire_connectors characterised in that said click in-click out grommet comprises a silicone grommet skirt and in that the vibration module comprises a molded channel supported by a rigid frame of the housing and capable of locking into the silicone grommet skirt to removably secure said housing to said compression joint wrap.

Figure 1 is a top perspective view of the flexible vibration pad.

Figure 2 is a plan view of the flexible vibration pad.

Figure 3 is a bottom view of the flexible vibration pad.

Figure 4 shows an exploded view of how the flexible vibration pad may click into the grommet of a shin wrap.

Figure 5 shows an exploded view of the component parts of the flexible vibration pad from the top-down perspective.

Figure 6 shows another exploded view of the component parts of the flexible vibration pad from the bottom-up perspective.

Figure 9 shows the bottom view of arm wrap of Figure 7.

Figure 10 shows the bottom view of the knee wrap of Figure 8.

Figure 11 is a side view of the flexible vibration pad clicked in the grommet of the wrap.

Figure 14 shows a top view of the arm wrap of Figure 7 with the pad clicked in the grommet of the shin wrap.

a rechargeable battery (72) with an on/off switch (14) in said housing, 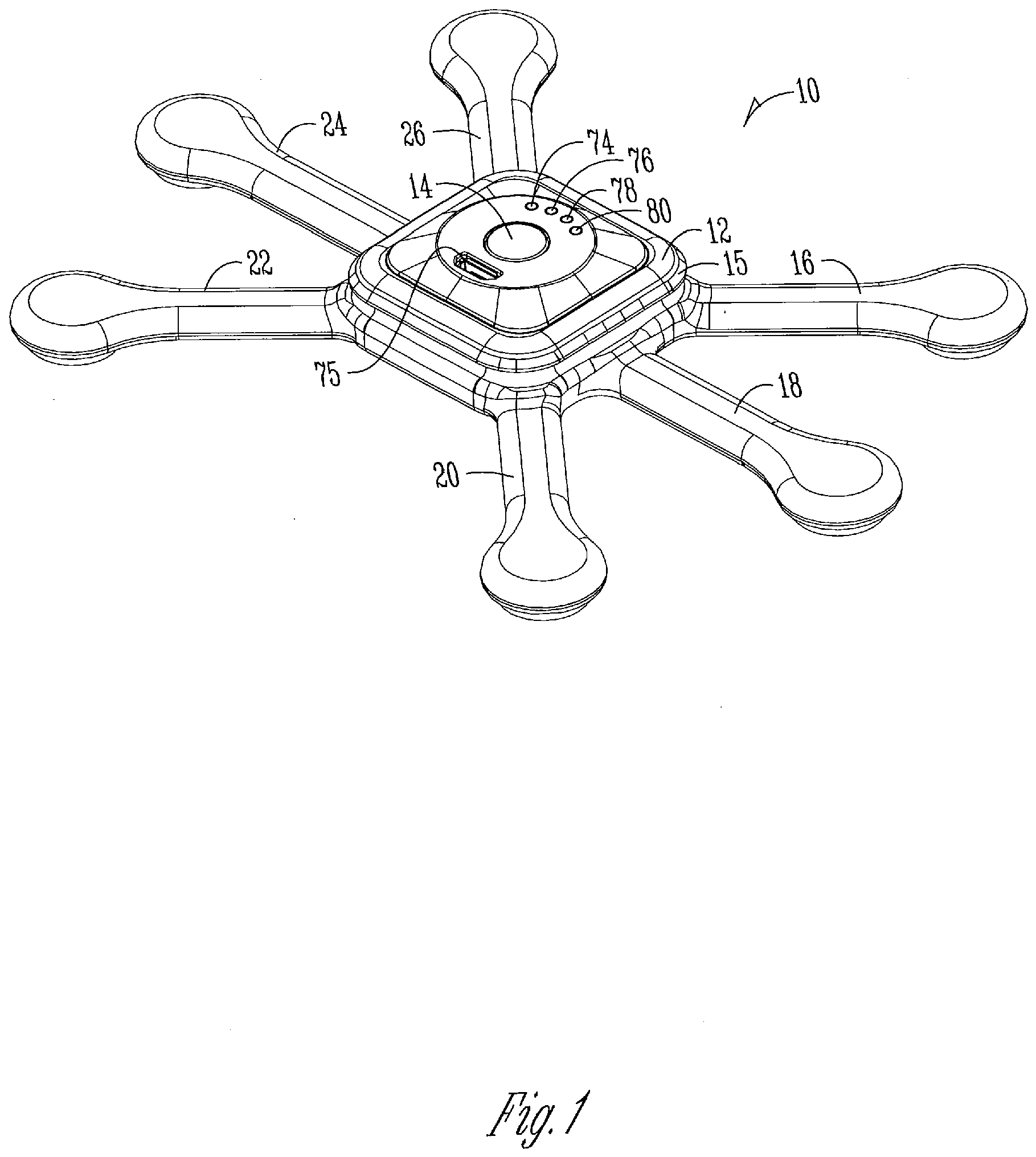 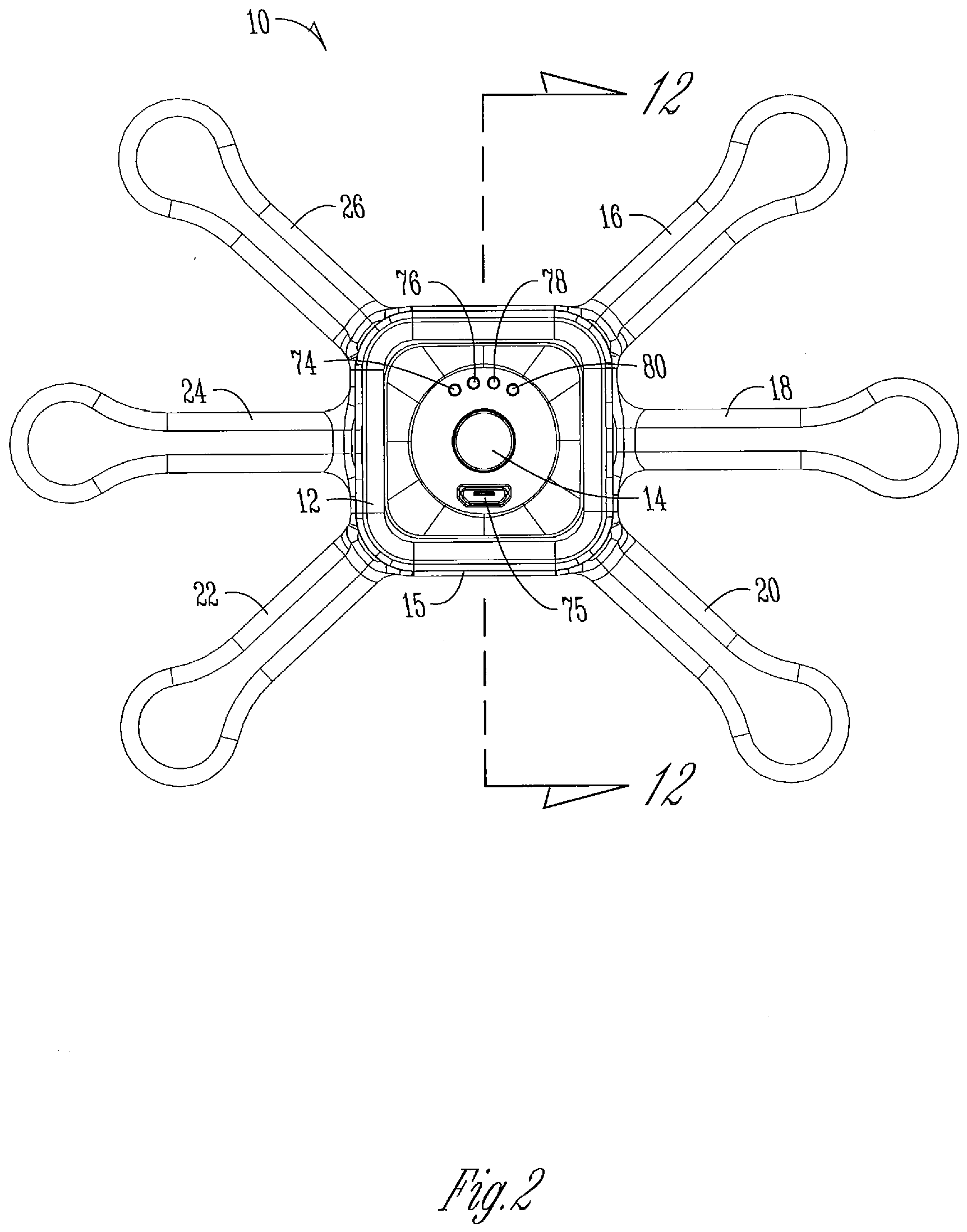 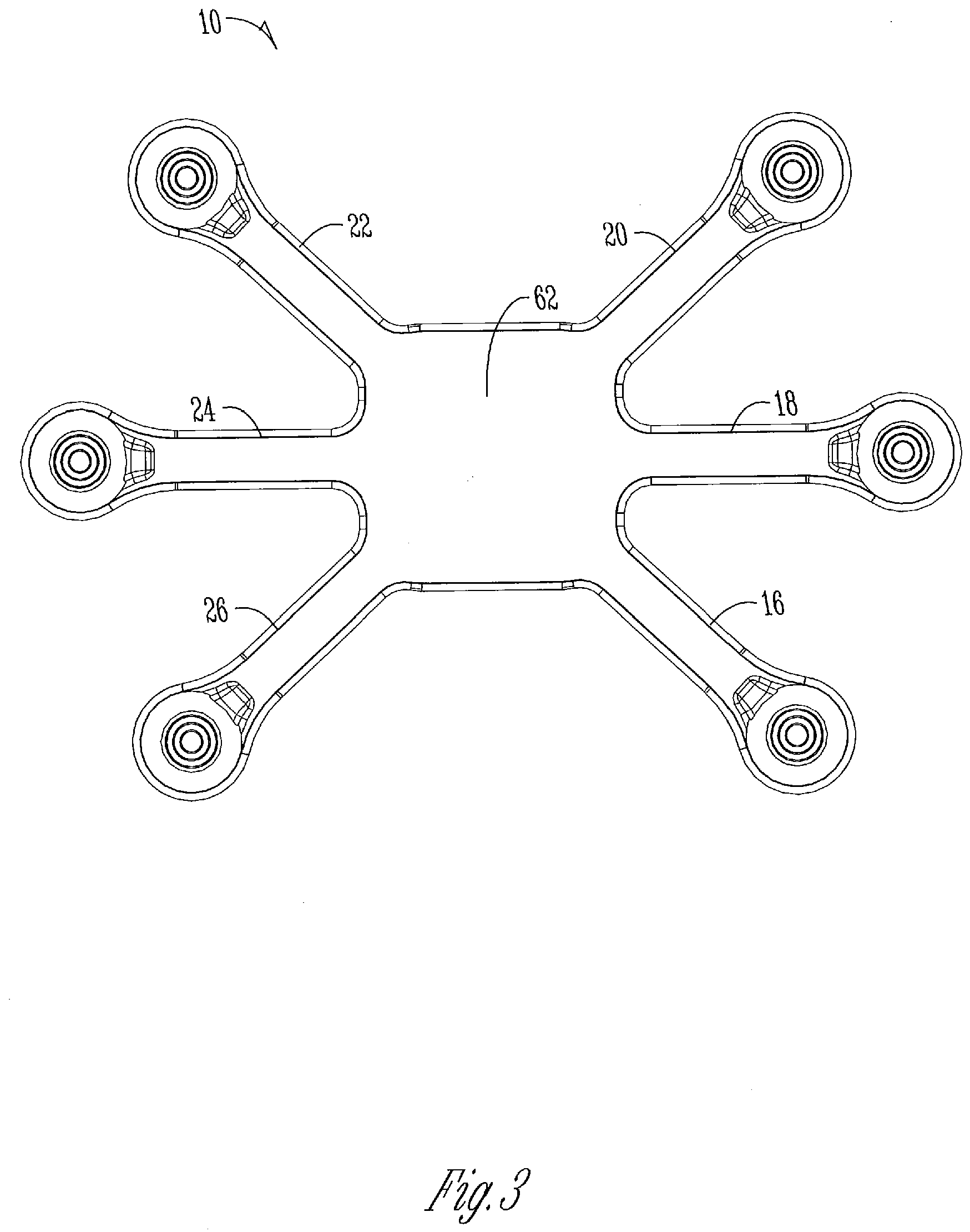 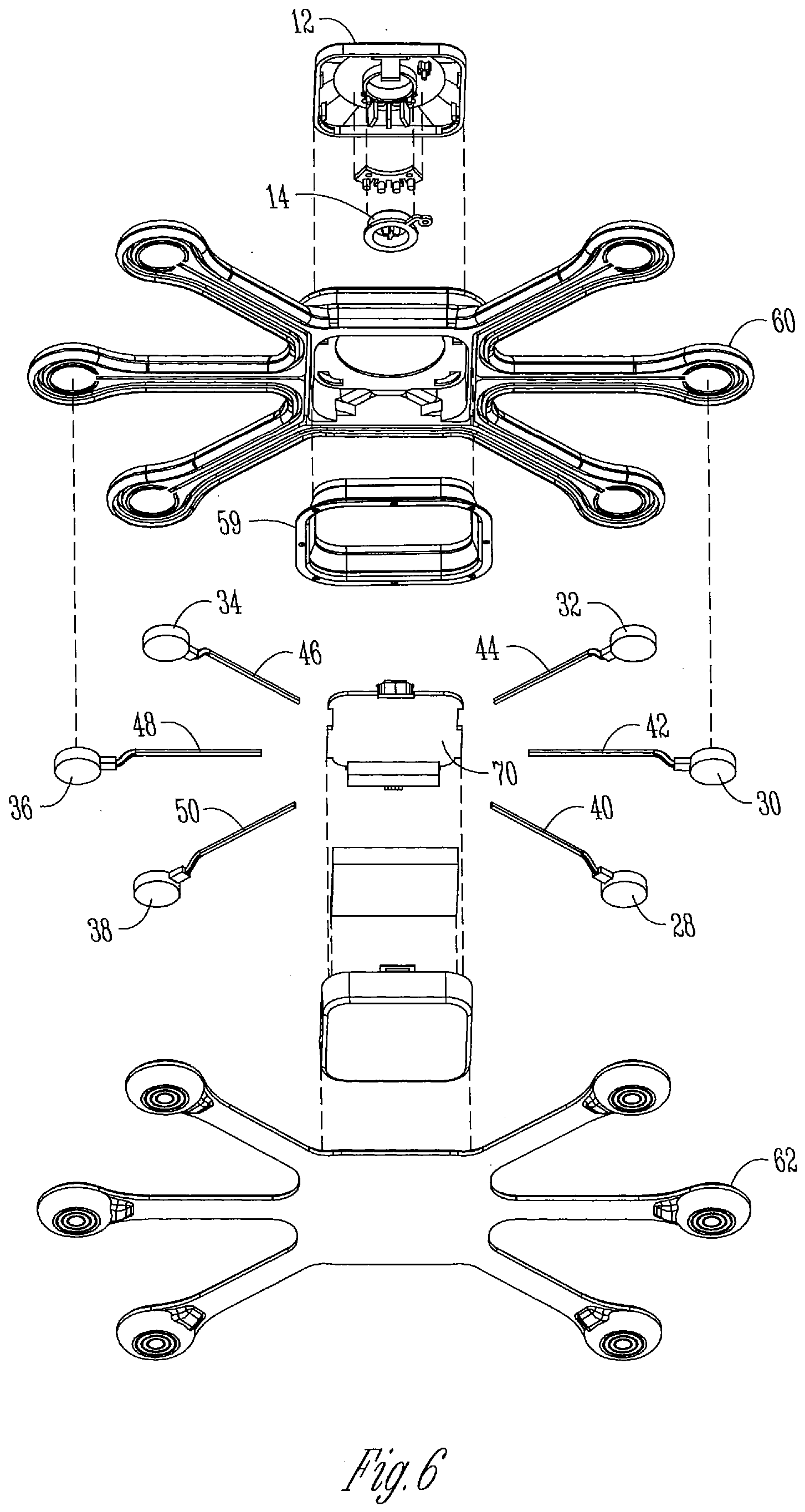 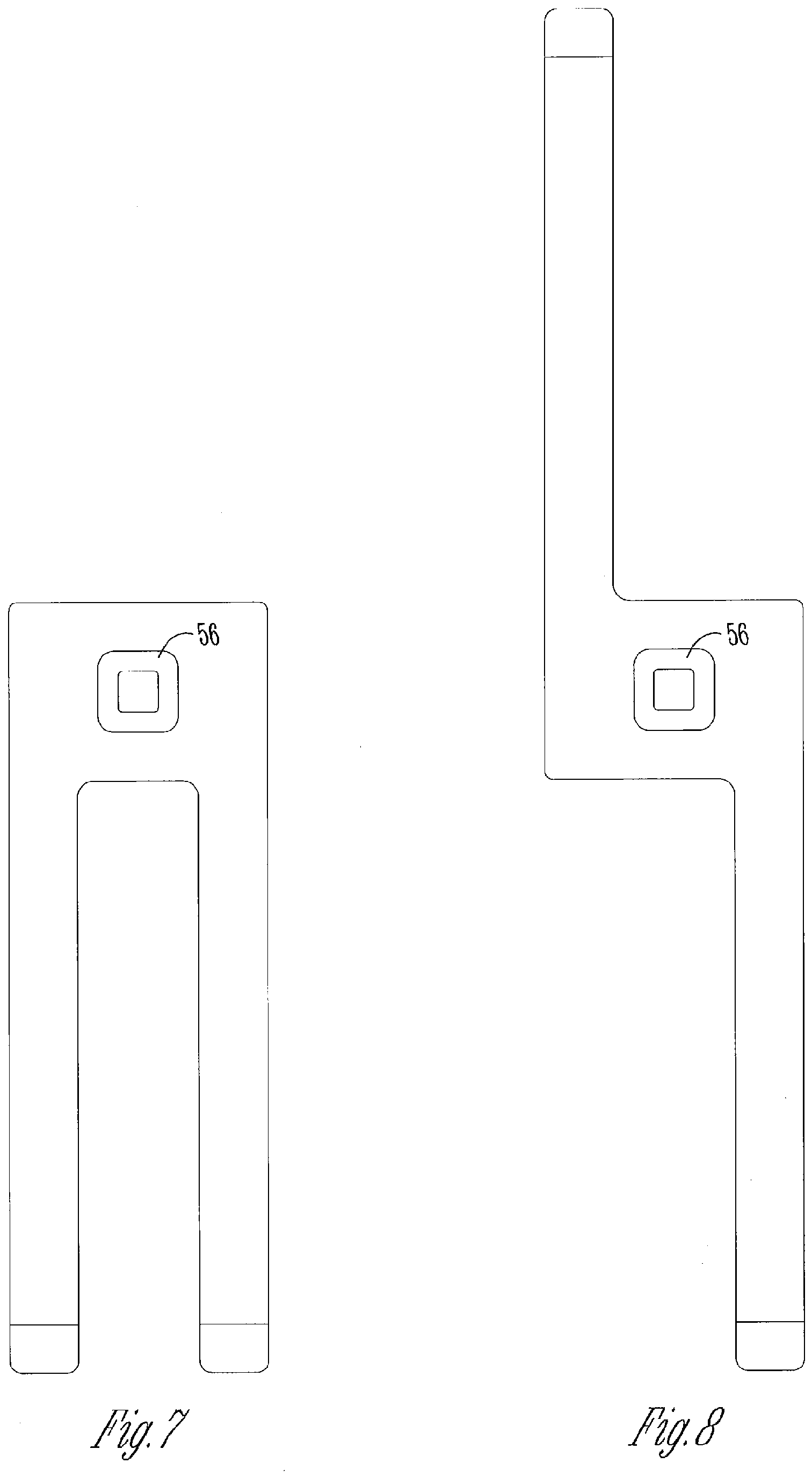 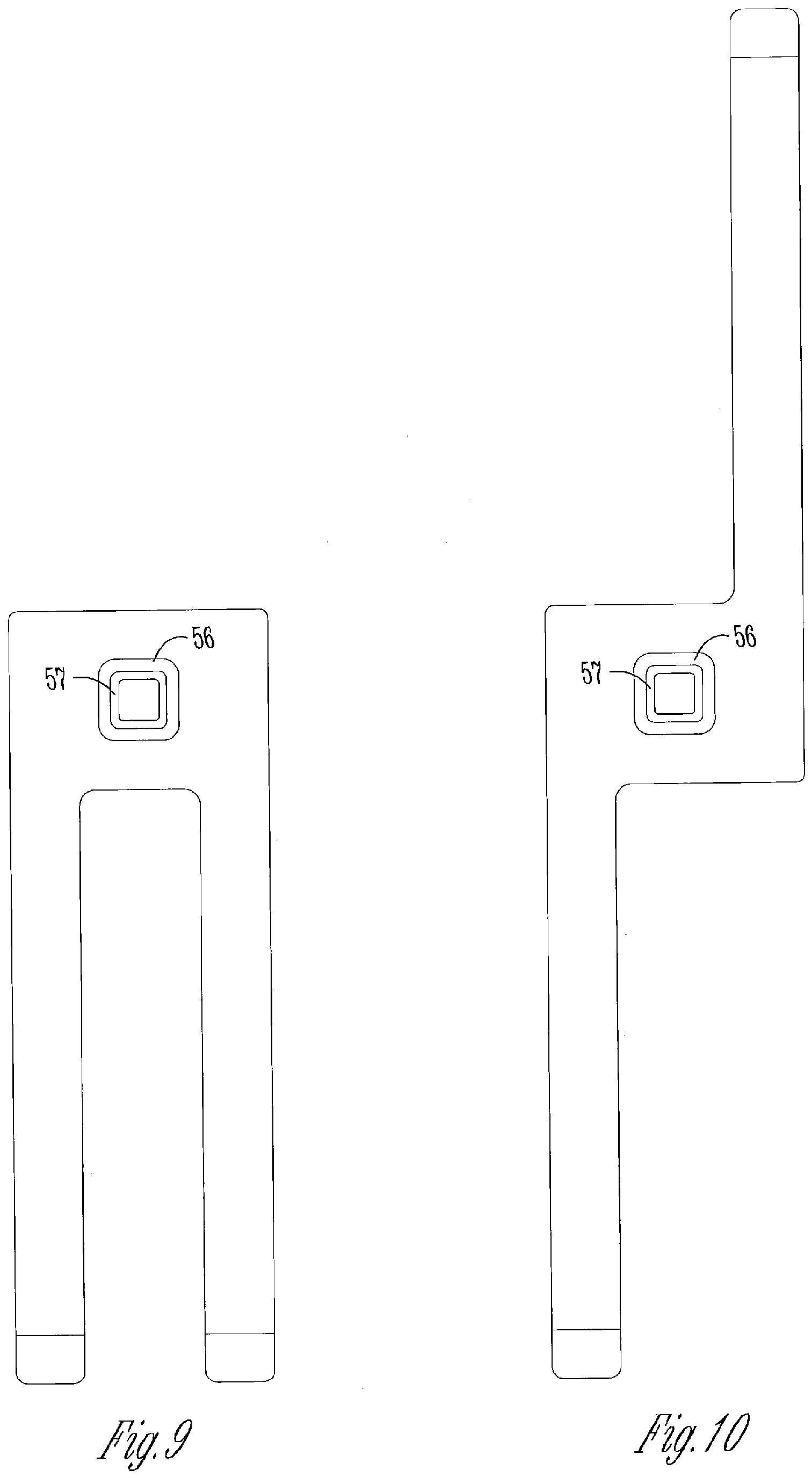 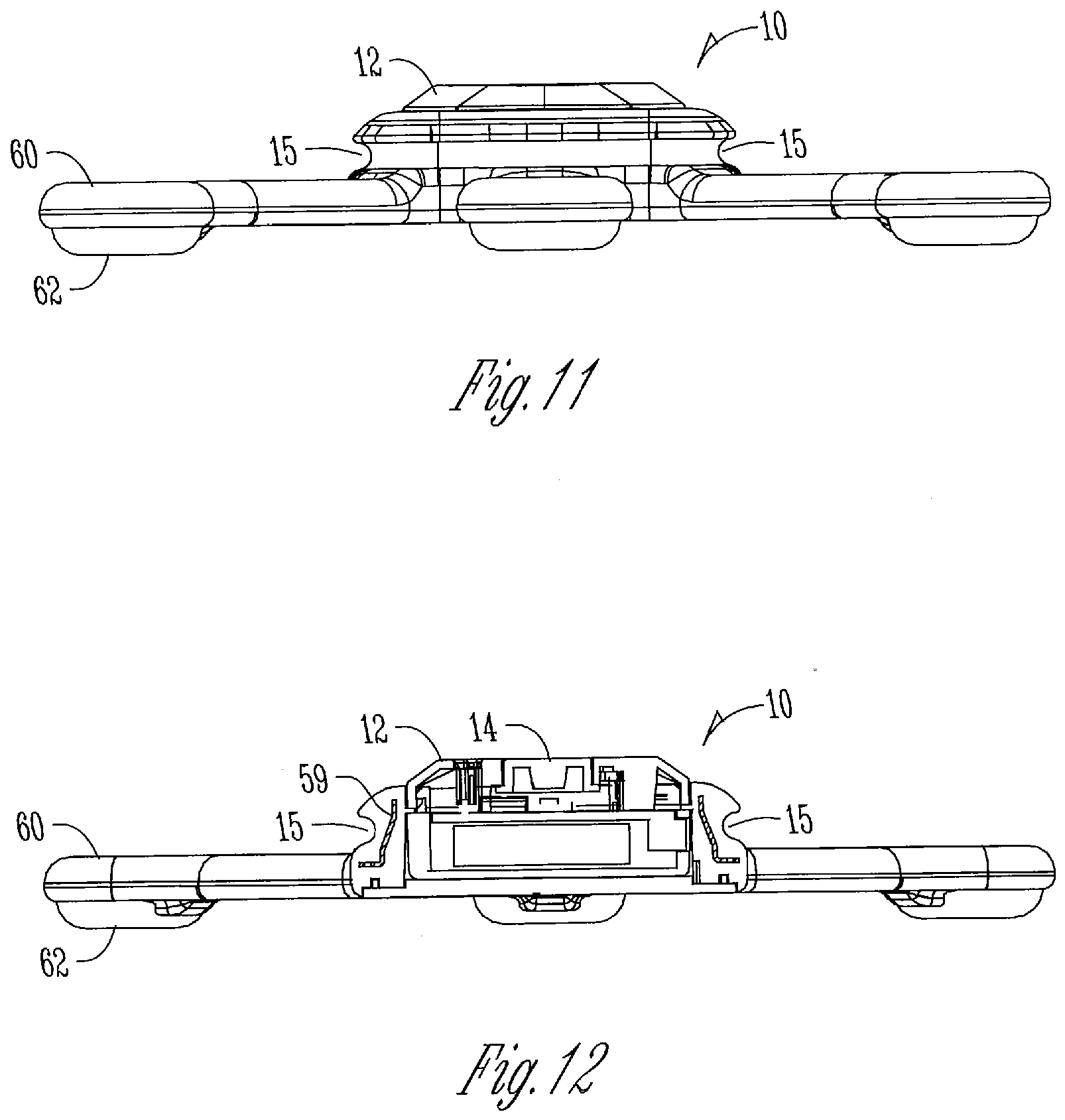 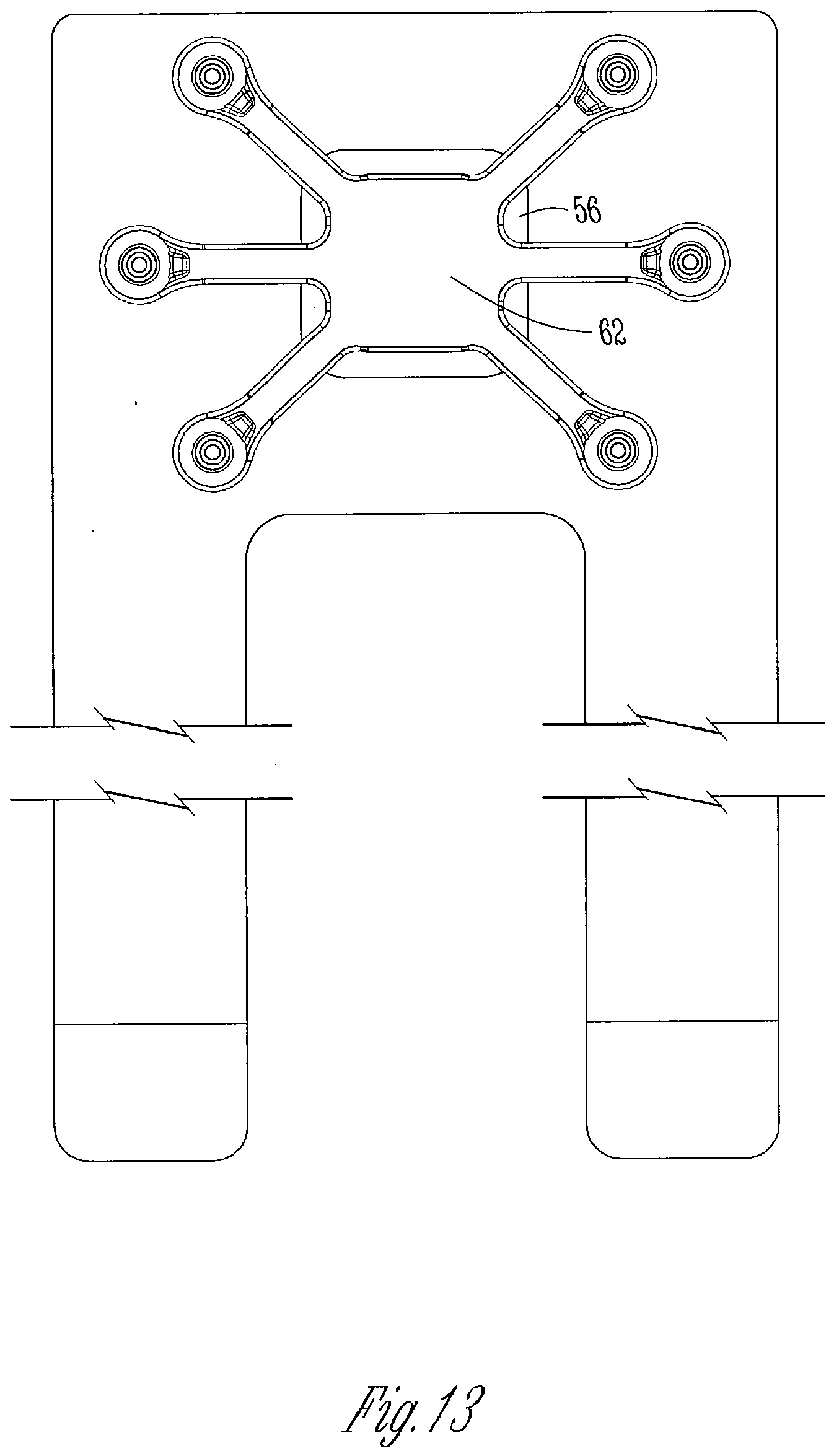 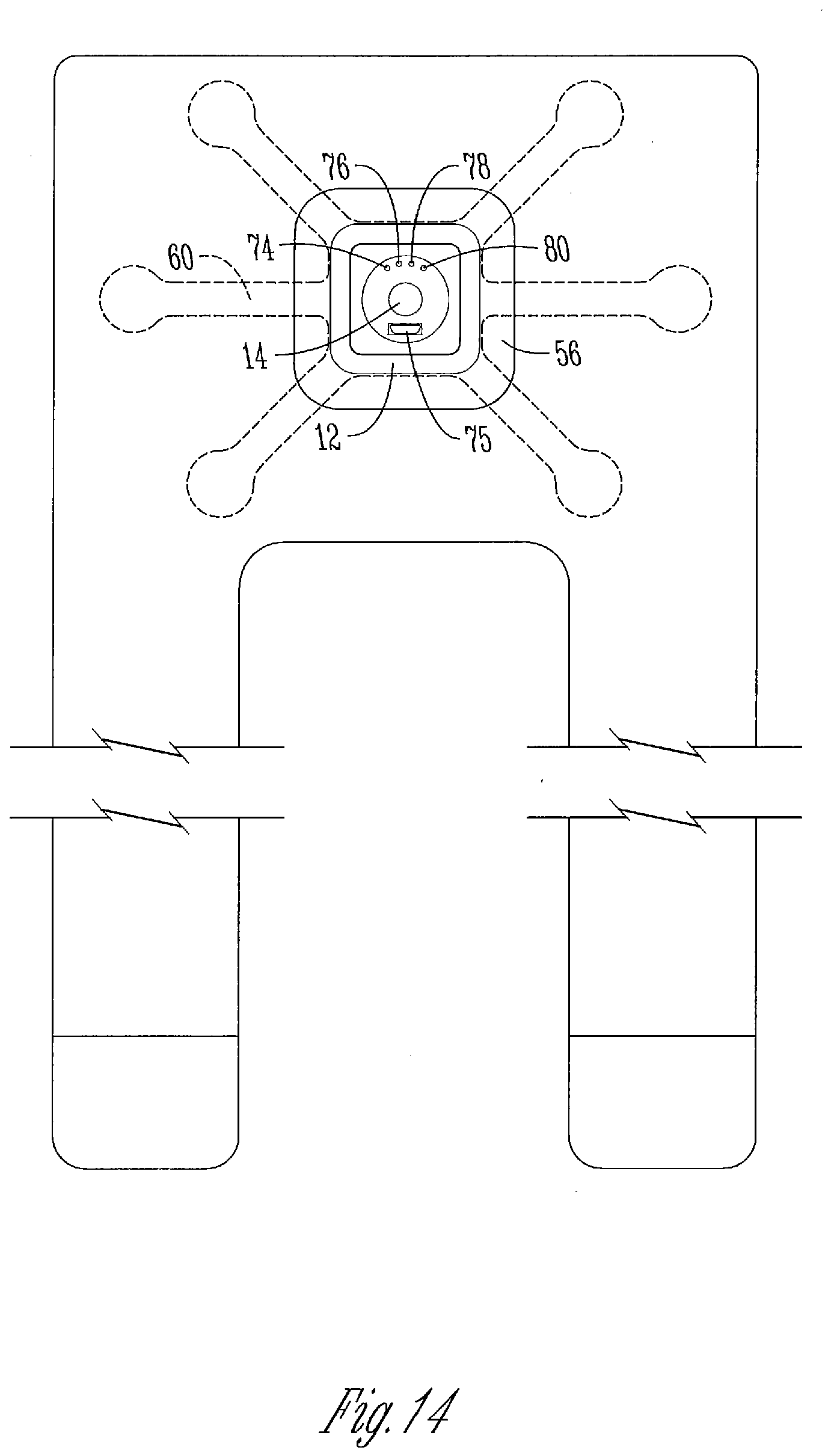