[0001] This invention relates to device for generating laser induced optical breakdown in skin tissue and as such can be used for (cosmetic) treatment of skin of humans or animals. The device comprises a light source and an optical system for focusing the incident light beam of the light source in a focal spot located outside the device.

[0007] A problem which can arise is that parts of the optical system through which the light exits the device (light exit window) can be damaged by the products of the LIOB (shock wave, plasma, high power density). A damaged light exit part has a detrimental effect on the ability of the device to provide a sufficiently tight focus at the desired position, which may reduce the efficacy of the treatment process and/or may increase the occurrence of adverse side effects, such as skin irritation.
[0008] There is therefore a need for a LIOB generation device in which coupling of light into the skin is ensured without damage to the light exit window.
[0009] A professional LIOB based skin treatment device is required to create lesions at different or multiple depths inside the skin to obtain higher treatment efficacy and/or, in particular, for the treatment of deep wrinkles, tattoos, or other skin characteristics. Also, skin is not evenly thick across a human's skin area. The range of depth of such a device is for example preferably in the range of 100 µm - 1000 µm. Furthermore, the device should be able to provide this variable depth focus feature without excessively complicated system modifications. Ideally, the treatment depth should be adjustable without intervention of a technical specialist. It is also desirable for the device to allow fast treatment at various different treatment depths to suit a number of application areas.
[0010] The requirements of users to be able to treat at various depths thus mainly relates to the optimization of treatment efficacy.
[0011] The maximum attainable treatment depth is generally limited by the amount of available laser power and the physical depth of the dermis on the one hand, and by the proximity to the light exit window of the device on the other hand. Treating too close to the window (i.e. the final optical element in the laser path) may lead to optical breakdown in the window, causing permanent failure.
[0012] Single lenses incorporating both high numerical aperture and large free working distance are typically relatively bulky. As an example, the weight of typical known water immersion objectives, having typical free working distances in water of 3.3 and 2.2 mm for example, is considerably too high to allow for rapid acceleration during scanning. Additionally, their clear aperture is large, leading to relatively bulky scanning optics required to deflect the beam. A further challenge related to such a general purpose objective lens is that it will not have been optimized for use with focusing inside skin, leading to reduced performance in these kinds of applications.
[0013] A further problem which thus arises in a system having an adjustable focal depth is that when the beam is focused at multiple depths inside the skin, the beam quality in the focus will be deteriorated resulting from the (spherical) aberration. These aberrations are introduced by the varying target depth of the different objectives and the variations in skin humidity from area to area of a subject and from subject to subject. The reduction in the quality of the beam in the focus resulting from aberrations prevents the occurrence of LIOB and thereby gives poor efficacy of treatment.
[0014] There is therefore a need for a LIOB generation device in which coupling of light into the skin is improved or even ensured for different focal depths within the skin.
[0015] It is an object of the invention to at least partly fulfill one or more of the aforementioned needs.
[0016] This object is achieved with the invention as defined by the independent claims. The dependent claims provide advantageous embodiments.
[0017] Examples in accordance with a first aspect of the invention provide a device comprising:

a light source for providing a pulsed incident light beam for treating skin by laser induced optical breakdown of hair or skin tissue;

a focusing lens having convex light input surface and a convex skin-contacting light exit surface, wherein the focusing lens has a refractive index in the range 1.4 to 1.6 at the wavelength of the pulsed incident light beam; and

[0018] This device can be for generating LIOB in skin or hair of a human being or animal. The device can be for treatment and in particular cosmetic treatment of skin of such human being or animal. The device can be specifically adapted for this purpose and thus be a light based skin treatment device.
[0019] This arrangement provides a focusing system which gives a controllable depth, and which can be implemented with low cost and with simple applicability to the system. This provides an improvement to other solutions which could implement the desired free working distances. For example, commercial aspherical and spherical optics could be used which are typically designed for application in blue-ray players, CD players, DVD players, and at optical telecommunications wavelengths. However such standard spherical optics are typically bulky for ease of handling. These optics also give low performance for focusing into the skin to create LIOB as their optical and material properties are not satisfactory.
[0020] The invention enables an improved combination of low weight, large free working distance, and proper skin coupling geometry.
[0021] The pre-focusing lens may comprise an aspheric lens. A commercial aspheric lens may for example be used in combination with custom spherical optics. The development of manufacturing techniques for miniature aspheric optics in is still behind the development of custom spherical optics. Most aspheric micro-optics are manufactured using compression molding of low Tg glass materials and involves complicated iterative mold design. Alternative solutions involve molding of plastic optics and molding of liquid sol-gel fused silica.
[0022] Although these last two techniques do not involve the complicated high temperature mold design step, they still require some iteration in the process.
[0023] Designs incorporating the combination of fully customized spherical and aspherical optics can achieve the highest values for the numerical aperture (NA) such as NA>0.8. For example NA up to 1.2 can be used which is feasible when in contact with a medium such as skin.
[0024] The pre-focusing lens may comprise:

a convex light input surface; and

focusing the incident light beam into a focal spot in the hair or skin tissue by:

increasing the convergence of the incident light beam using a pre-focusing lens;

focusing the light exiting the pre-focusing lens into the skin using a focusing lens which is in contact with the skin and having convex light input and light exit surfaces, wherein the focusing lens has a refractive index in the range 1.4 to 1.6 at the wavelength of the pulsed incident light beam; and

[0032] Examples in accordance with a second aspect of the invention provide a device comprising:

an adjustable focusing system for focusing the incident light beam into a focal spot in the hair or skin tissue;

a scanning system for scanning the focal spot; and

a pre-focusing lens for increasing the convergence of the incident light beam; and

and the device further comprises a focus controller for controlling the distance from the focusing system to the focal spot by adjusting a spacing between the pre-focusing lens and the focusing lens.

[0038] Thus, the focusing system may then be based on the first aspect described above. All features defined for the first aspect can be used for the second aspect. Thus, as in the first aspect, the pre-focusing lens may comprise an aspheric lens. It may comprise a convex light input surface and a planar light output surface or a convex light output surface with an average radius of curvature greater than the average radius of curvature of the light input surface.
[0039] The focusing lens may be formed of BK7 glass or fused silica, and the outer surface of the skin contact lens for contacting the skin preferably comprises an anti-reflection coating.
[0040] A further aspect also provides a light based skin treatment method comprising:

focusing the incident light beam into a focal spot in the hair or skin tissue using an adjustable focusing system;

scanning the the focal spot across the skin using a scanning system; and

[0041] The methods or uses of the device according to the invention are preferably non-therapeutic methods or uses, in particular cosmetic methods, for altering skin appearance such as skin rejuvenation, wrinkle reduction or skin hair removal and the like.

[0042] Examples of the invention will now be described in detail with reference to the accompanying drawings, in which:

Figure 5 shows a first example of a lens system for providing aberration compensation;

Figure 6 shows a second example of a lens system for providing aberration compensation; and

Figure 7 shows the system of Figure 1 modified to include the lens system for aberration compensation.

an adjustable focusing system (23) for focusing the incident light beam (11) into a focal spot (15) in the hair or skin tissue;

a scanning system (21) for scanning the focal spot; and

- a pre-focusing lens for increasing the convergence of the incident light beam (11); and

- a focusing lens having convex light input and light exit surfaces,
and wherein the device further comprises a focus controller for controlling the distance from the adjustable focusing system to the focal spot by adjusting a spacing between the pre-focusing lens and the focusing lens.

a convex light input surface; and 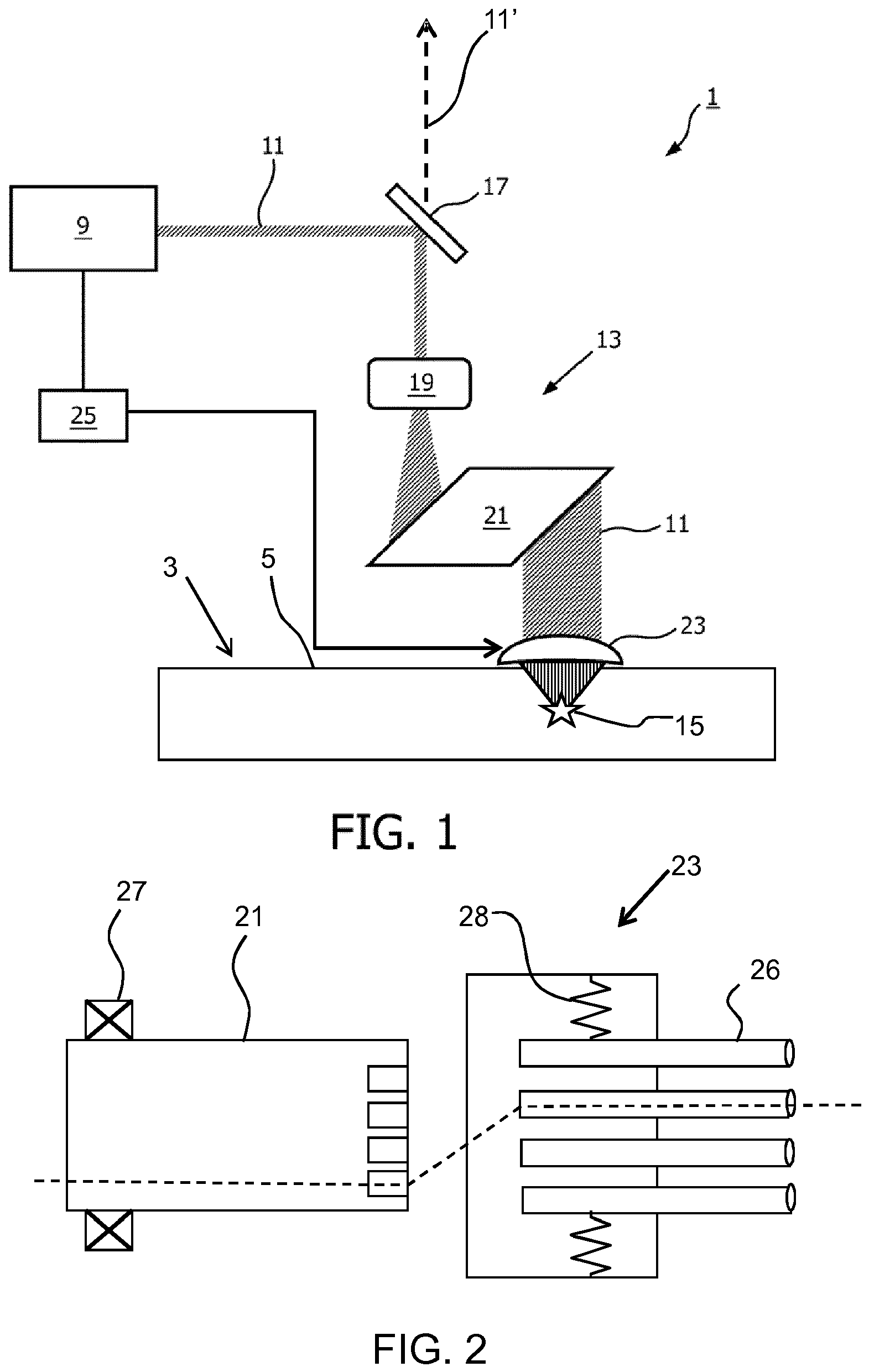 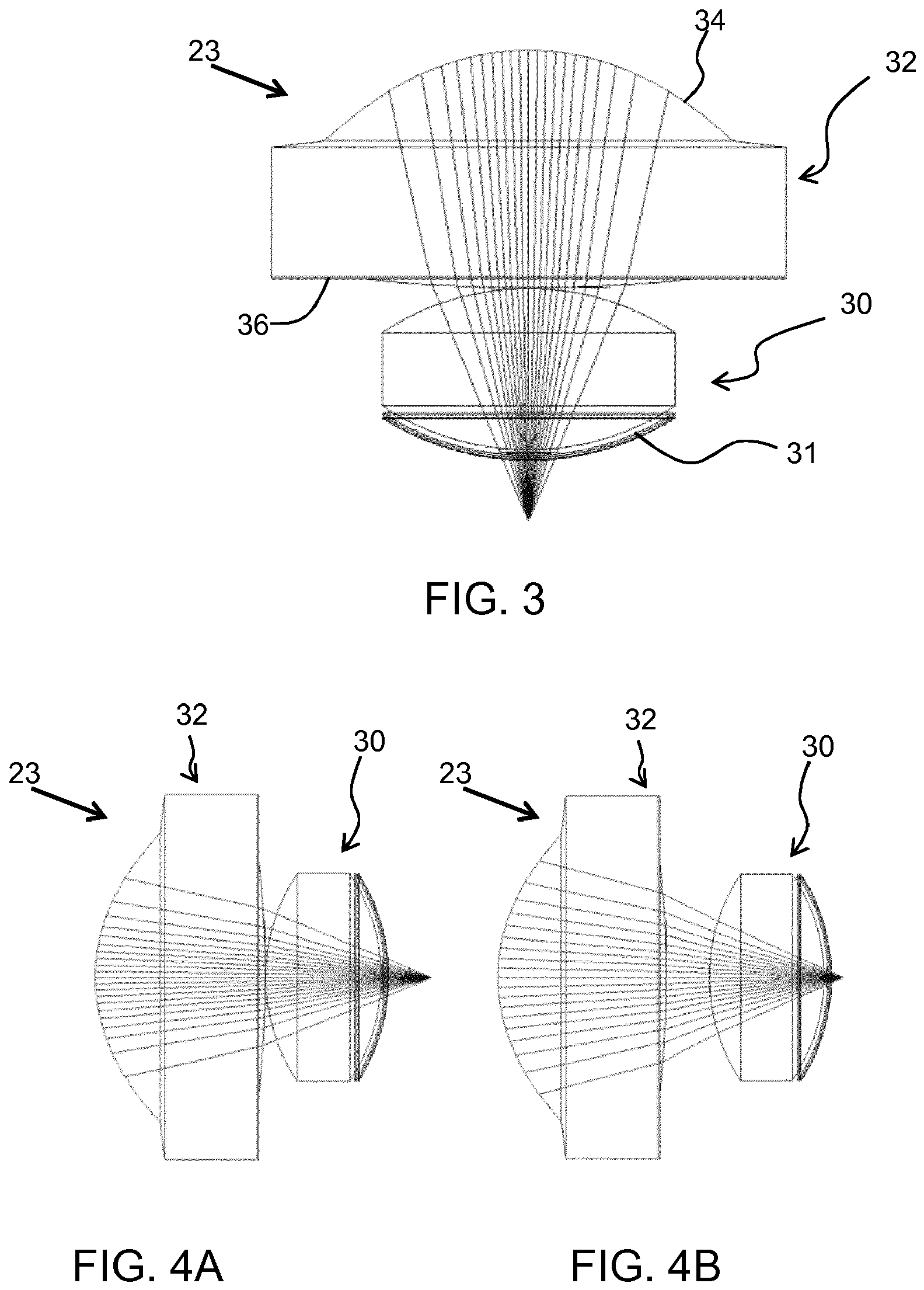 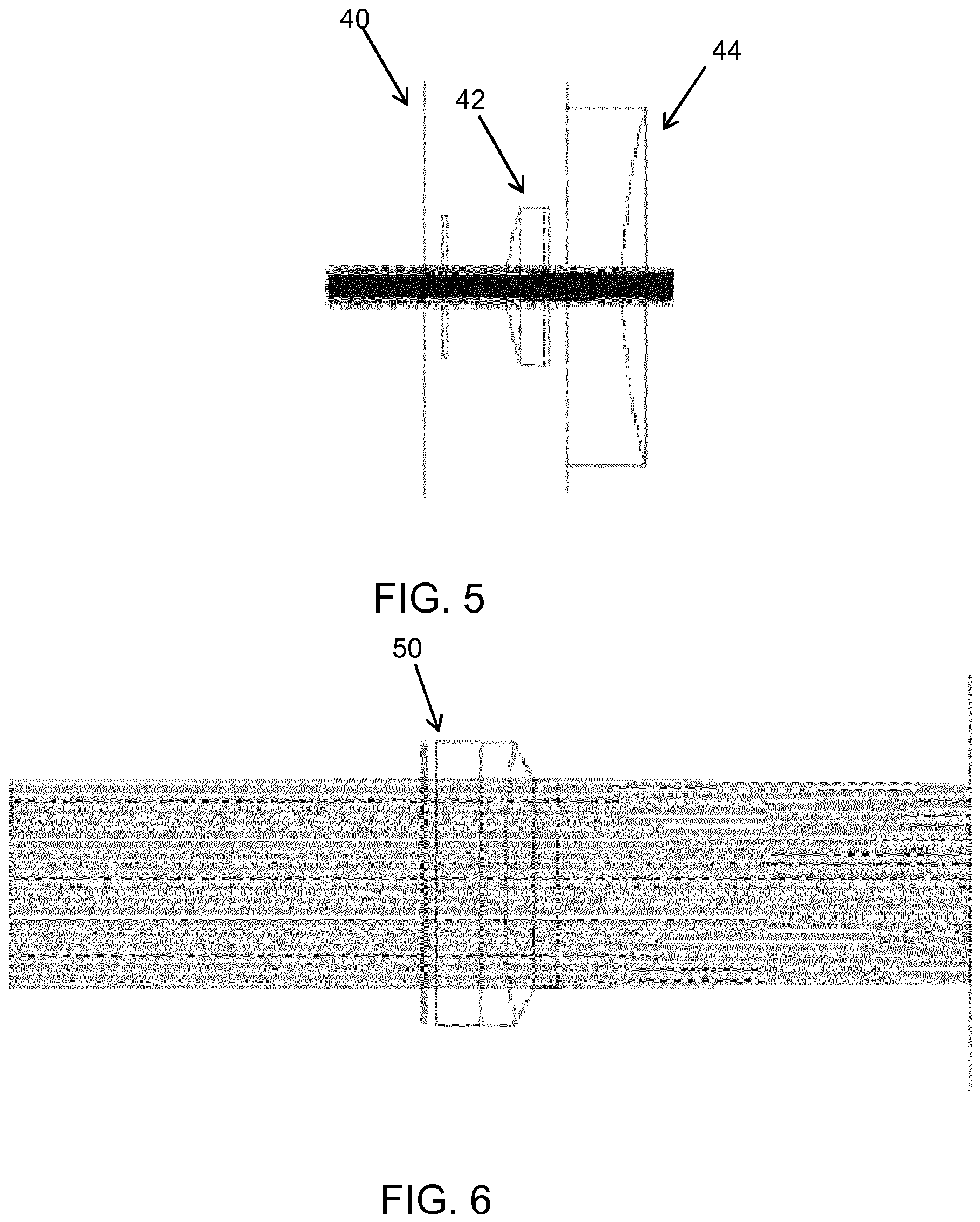 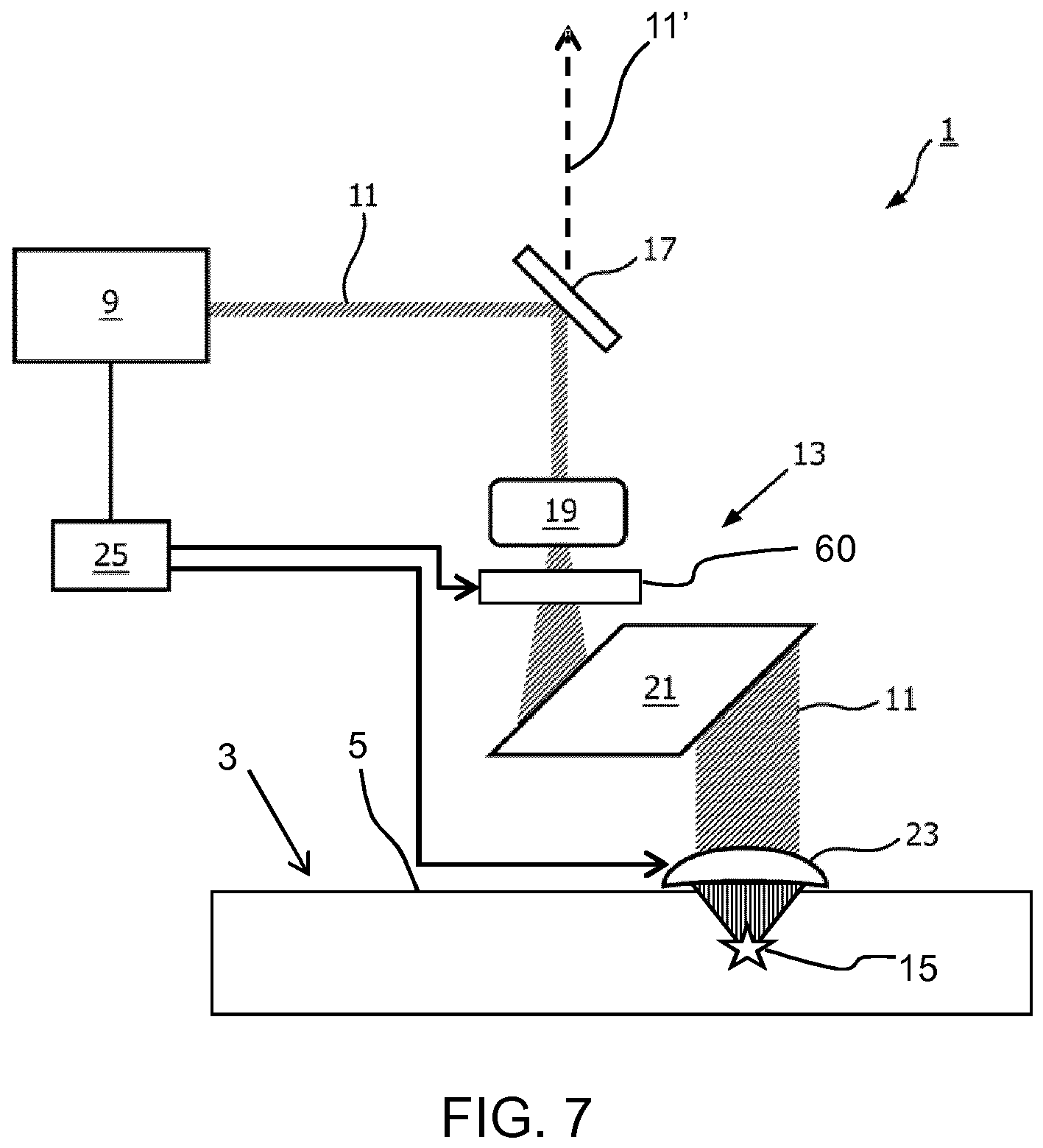