[0001] The invention is directed to manufacturing gears by the power skiving process and in particular to a method of adjusting or correcting the pressure angle of the cutting blades of a power skiving tool without the need to change the geometry of the blades. Such a method of manufacturing gears, according to the preamble of independent claim 1, is known from document US 2016/0175950 A.

[0009] With power skiving, the tool has a complicated geometry which is determined and manufactured for one specific work gear geometry. A solid high speed steel cutter 1 as shown in Figure 4 is the most common type of tool utilized in the power skiving process. The cutter disk 1 is manufactured for example from high speed steel material. The cutter disk 1 has a plurality of cutting teeth (or blades) 2 which have a front face 3, two cutting edges 4 and 5, two side relief surfaces 6 and 7 behind the cutting edges 4 and 5 as well as a top relief surface 8.
[0010] Correction methods for pressure angle changes are known in the state of the art if such a tool produces teeth with a pressure angle error. Such correction methods include:
[0011] Method A is expensive and time consuming. There may be several weeks of turn-around time required in order to re-shape and re-coat the blade profiles 4 and 5 of the cutter disk 1. In most cases, such a re-working is not even possible because the corrected profile would require altering the diameter and/or the thickness of the disk 1. A diameter change will cause additional tooth profile distortion of the manufactured work gear 15 and therefore is not permissible. Changing the thickness of the cutter disk 1 is in most cases not possible because the side relief behind the front face cutting profile (surfaces 6 and 7) reduces the thickness of the cutting teeth which will cause tooth thickness errors in the produced gears.
[0012] Method B can be applied within very small limits. Changing the three-dimensional orientation of the cutter disk (Figure 3) might correct the pressure angle error but also will distort the involute profile which causes secondary profile errors in the produced work gears. The additional tool inclinations required for such a correction will also reduce or increase the technological blade angles such as side rake angle (surface 3), side relief angles (surfaces 6 and 7) and the top relief angle (surface 8) which might have an adverse effect to the tool life and the produced surface finish.

Figure 1 shows a three dimensional graphic of a cylindrical hob, a virtual generating rack and a work gear.

Figure 2 shows a three dimensional graphic of a shaper cutter, a virtual generating rack and a work gear.

Figure 3 shows front and top views of the orientation of a power skiving cutter and internal gear.

Figure 6 shows the reference profile and one involute of a cutting blade before and after a corrective radial shift.

Figure 7 shows the relationship between the radial direction and blade shift direction.

[0016] The details of the invention will now be discussed with reference to the accompanying drawings which illustrate the invention by way of example only. In the drawings, similar features or components will be referred to by like reference numbers.
[0017] The use of "including", "having" and "comprising" and variations thereof herein is meant to encompass the items listed thereafter as well as additional items. The use of letters to identify elements of a method or process is simply for identification and is not meant to indicate that the elements should be performed in a particular order.
[0018] Although references may be made below to directions such as upper, lower, upward, downward, rearward, bottom, top, front, rear, etc., in describing the drawings, these references are made relative to the drawings (as normally viewed) for convenience. These directions are not intended to be taken literally or limit the present invention in any form. In addition, terms such as "first", "second", "third", etc., are used to herein for purposes of description and are not intended to indicate or imply importance or significance.
[0019] Figure 5 illustrates a recent type of peripheral cutting tool 20 (e.g. US 2016/0175950) utilizing individual blade sticks 21 as a cutting tool for processes including the power skiving process. Each blade stick 21 has a front face 25 and two cutting edges 22 and 23 as well as a calculation point or pitch point 24. The cutting edge profiles 22 and 23 of the stick blades 21 are formed in order to duplicate or approximate the involute profile of the comparable solid cutter 1 (e.g. Figure 4). The pitch diameter of the assembled blades is adjusted by the axial location of the blade calculation point or pitch point 24. The pitch diameter in the peripheral stick blade cutter 20 duplicates the pitch diameter of the equivalent solid cutter 1 (2*Rw in Figure 3) in order to assure that the peripheral stick blade cutter 20 produces the same work piece geometry as the comparable solid disk cutter 1. In order to position the pitch point 24 in the correct radial location, the blade sticks can be shifted in direction 26 which is in the lengthwise orientation direction of the stick blade 21.
[0020] Figure 6 shows the reference profile 34 and the involute 30 generated by the reference profile 34, respectively by unrolling the virtual cord I*b from the base circle 39. The involute triangle I*b → R*b → (DOtool/2-ΔR) enables the determination of the pressure angle at point 32 with: α+Δα = arccos[Rb* / (DOtool/2-ΔR)].
[0021] The inventors have discovered that an axial shift of the blade reference point 24 (Figure 5) will shift the existing involute on the blade profiles 22 and 23 into a different radial location. If a point 32 on the involute profile 30 is shifted together with the involute 30 in direction 26 by the amount Y into the position 31 (located on shifted involute 35), then the pressure angle of the involute 30 at point 32 will now be located at point 31 on involute 35. The reference profile 34 is shifted by the same amount Y (approximately equivalent to the center distance adjustment ΔR) and becomes profile 36. Because of the different involute triangle Ib → Rb → D0tool/2, the correct pressure angle at point 31 would be α = arccos[Rb / (D0tool/2)]. In other words, the pressure angle change at point 31 is equal to Δα due to the fact that the existing involute on the blade was shifted to a larger radius. Blade point 32 manufactures on profile 34 the same flank point as blade point 31 on the center distance corrected profile 36. This is due to the shift of the existing blade profile to a larger radius (without re-developing the involute which it would require to manufacture the same original reference profile). Because of the fact that afore mentioned applies to each point along the profile 36, not only the observed point 31, but the entire manufactured profile will change its pressure angle accordingly.
[0022] With the shift of the involute 30 to location 35, the reference profile 34 is also shifted in the same direction, by the same amount to location 36. The generating reference profile 34 has to be shifted in the same direction 26 by the same amount Y in order to re-establish a relationship between work gear 15 and cutter 20 which will create the same tooth thickness as well as the same tooth depth of the work gear 15 manufactured before said radial stick blade shift. The shift of the reference profile 34 to position 36 requires a center distance correction between cutting tool 20 and work gear 15 of an amount ΔR. The resulting work gear geometry has the same radial location of the slots, with the same slot width and the same tooth thickness but has a pressure angle which changes by Δα.
[0023] The center distance is the distance between two parallel axes or crossed axes gears. The center distance is the length of the line which connects the two axes and is perpendicular to each of them. It is also the shortest distance between the parallel or crossed axes. The center distance is calculated as the sum of the working pitch radii of two parallel axis gear members. In a gear manufacturing machine, the center distance is increased by moving the tool and the workpiece apart from each other.
[0024] As mentioned above, the pressure angle of the original involute location 30 at point 32, which is relevant for the work gear manufacture, can be calculated by:

[0026] Figure 7 shows the geometrical relationship for the calculation of the angle γ between the radial shift direction 26 and the involute reference line direction 37. The blade thickness TB is calculated as arc length of a large circle 33 or as secant of a circle segment of 2γ, dividing the circumference of the pitch circle (or reference circle) 33 in equal spaces of blade thickness and gap between two preceding blades, based on the theoretical number of teeth. The theoretical number of teeth is represented in the cutter 1 of Figure 4. The angle γ between radial blade shift direction and involute reference line is calculated according to Equation 4.
[0027] The angle between the shift direction and the radial direction is calculated from the relationships shown in Figure 7.
[0028] The following formulas can be derived from the relationship in Figure 7:

[0030] The relationship between incremental radial blade position changes and the pressure angle correction is calculated as follows:

[0034] The inventive method of correcting pressure angles avoids the requirement for blade profile regrinding (prior art Method A), which also would require a recoating. Regrinding and recoating is time consuming and expensive. The inventive method also avoids the three-dimensional cutter inclination according to prior art Method B. The side effects of Method B (changing the technological tool angles) are, in particular, not acceptable if those angles are optimized in order to achieve good tool life and good surface finish. Optimized technological blade angles are of special importance in a hard skiving process (hard finishing of soft machined and case hardened gears). In order to preserve the technological blade geometry, the inventive method is applicable. In the case of hard skiving, the inventive method presents a pressure angle change and/or correction method which maintains all technological blade angles without the requirement of regrinding and recoating the blade profiles.
[0035] While the invention has been described with reference to preferred embodiments it is to be understood that the invention is not limited to the particulars thereof. The present invention is intended to include modifications which would be apparent to those skilled in the art to which the subject matter pertains without deviating from the scope of the appended claims.

1. A method of manufacturing gears produced by power skiving with a cutting tool (20) having a periphery and a plurality of stick-shaped cutting blades (21) located about the periphery of the cutting tool, said method comprising:

providing a first gear having an initial pressure angle (α), a radial location of tooth slots, a tooth slot width and a tooth thickness, and

2. The method of claim 1 wherein the center distance change (ΔR) is approximately equal to the change in radial position (Y).

5. The method of claim 1 wherein said first gear is a theoretical reference gear. 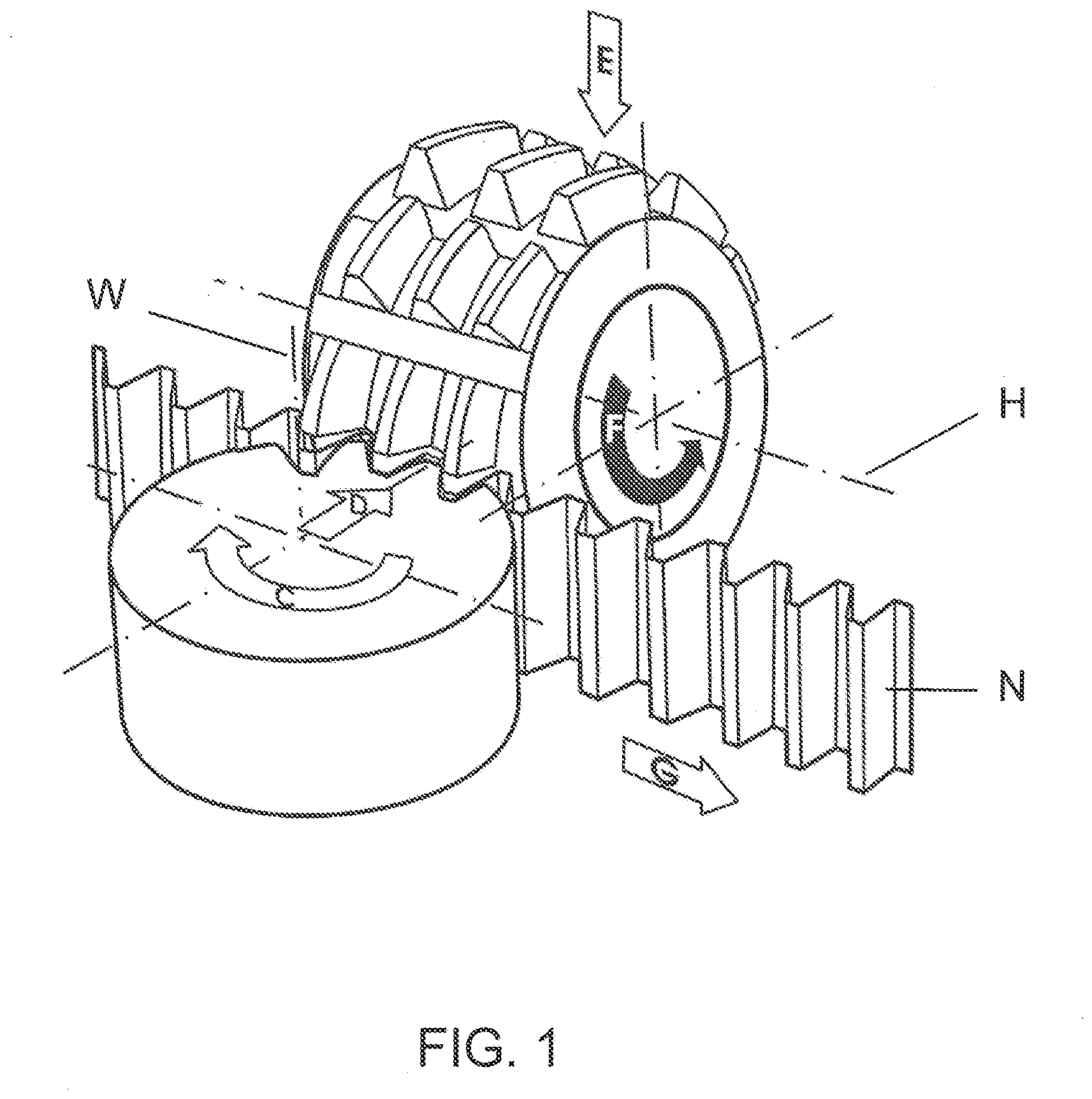 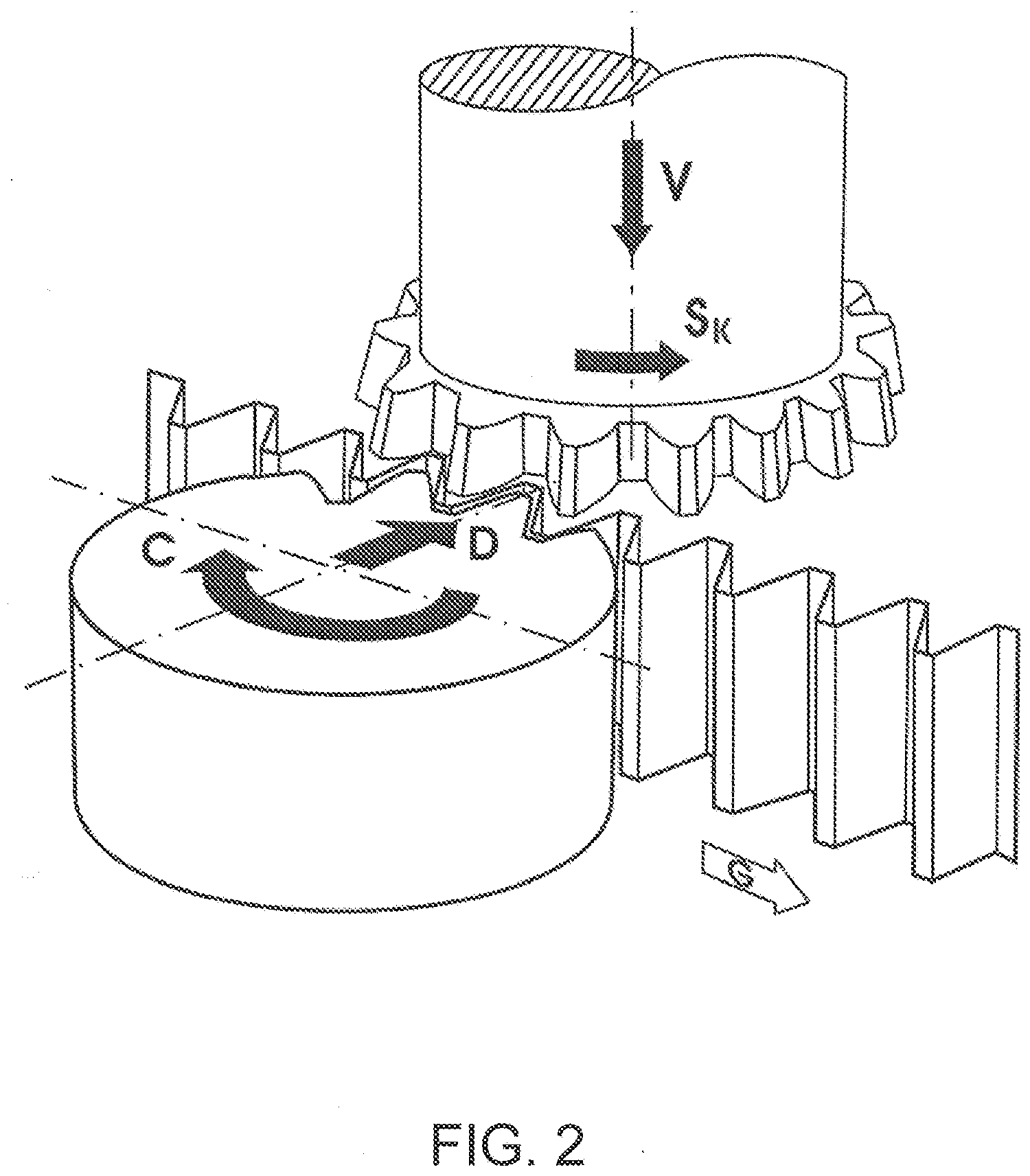 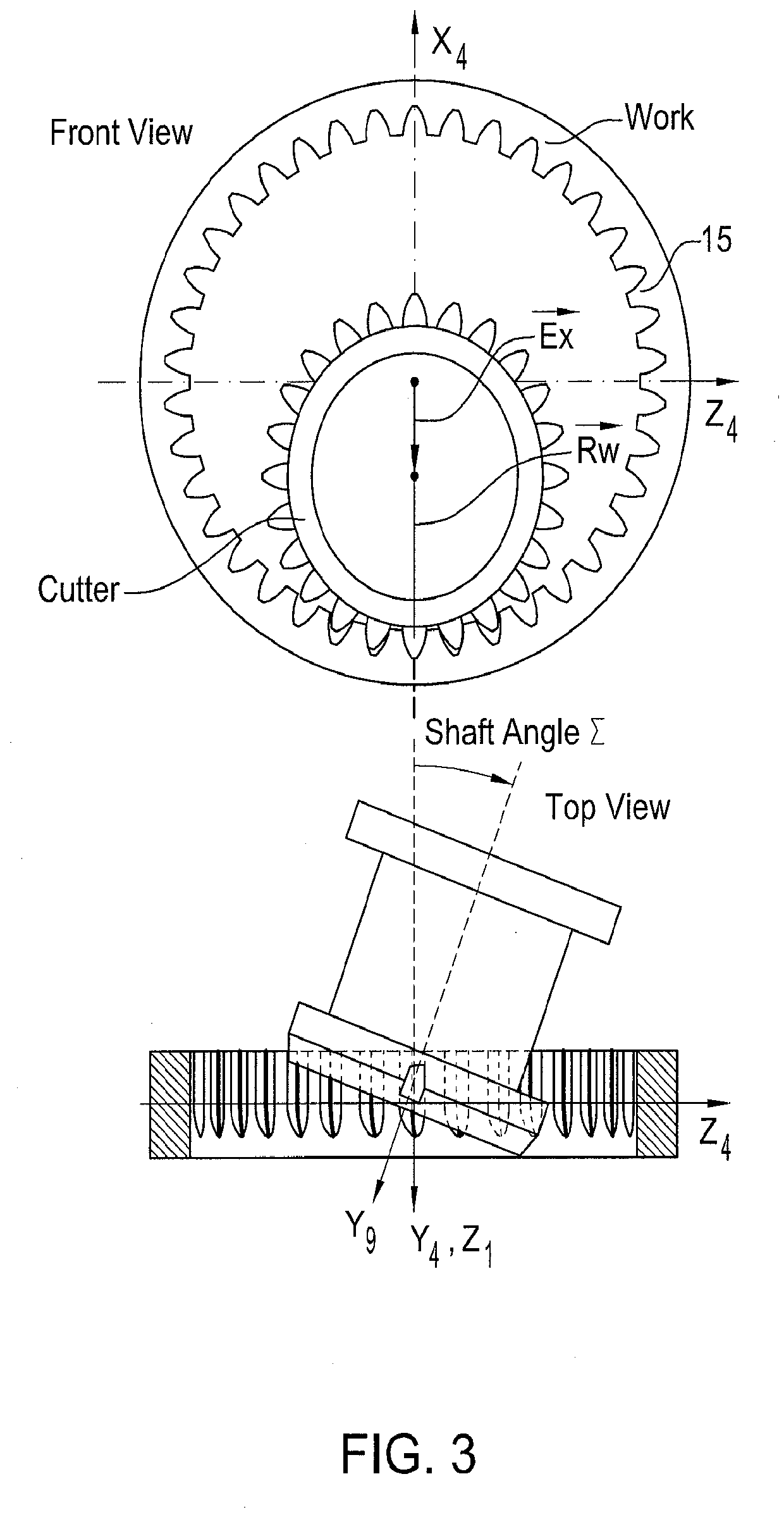 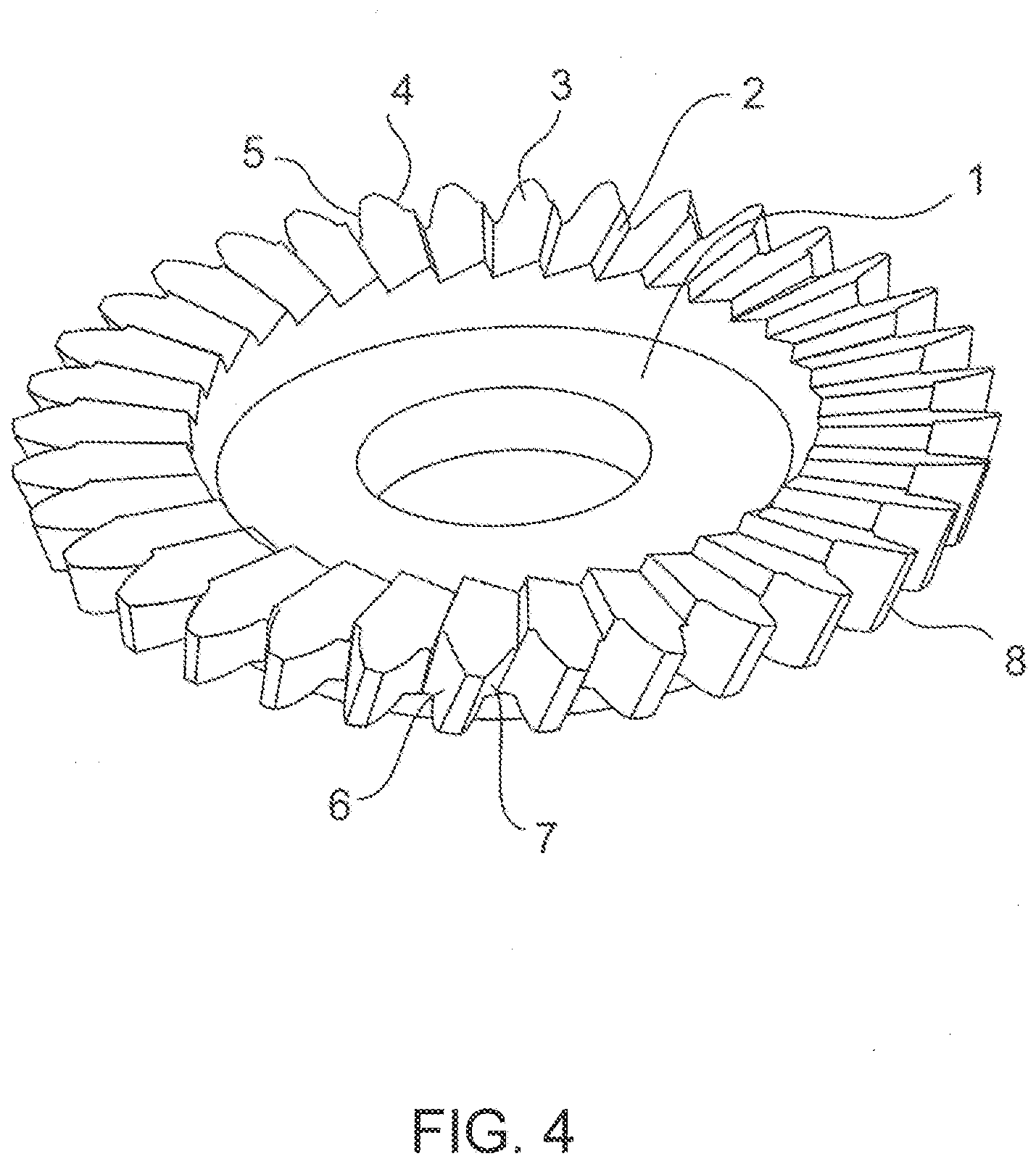 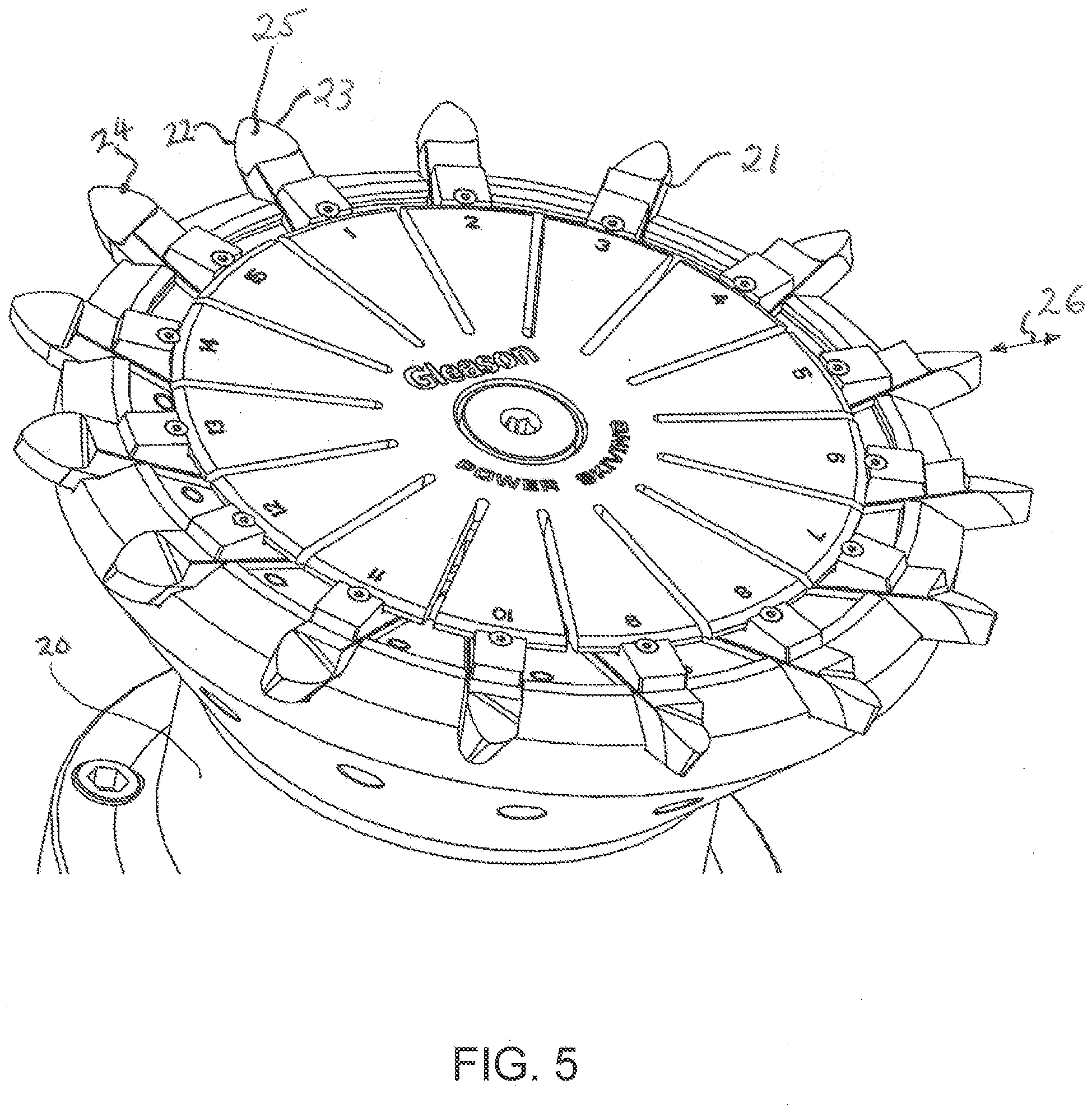 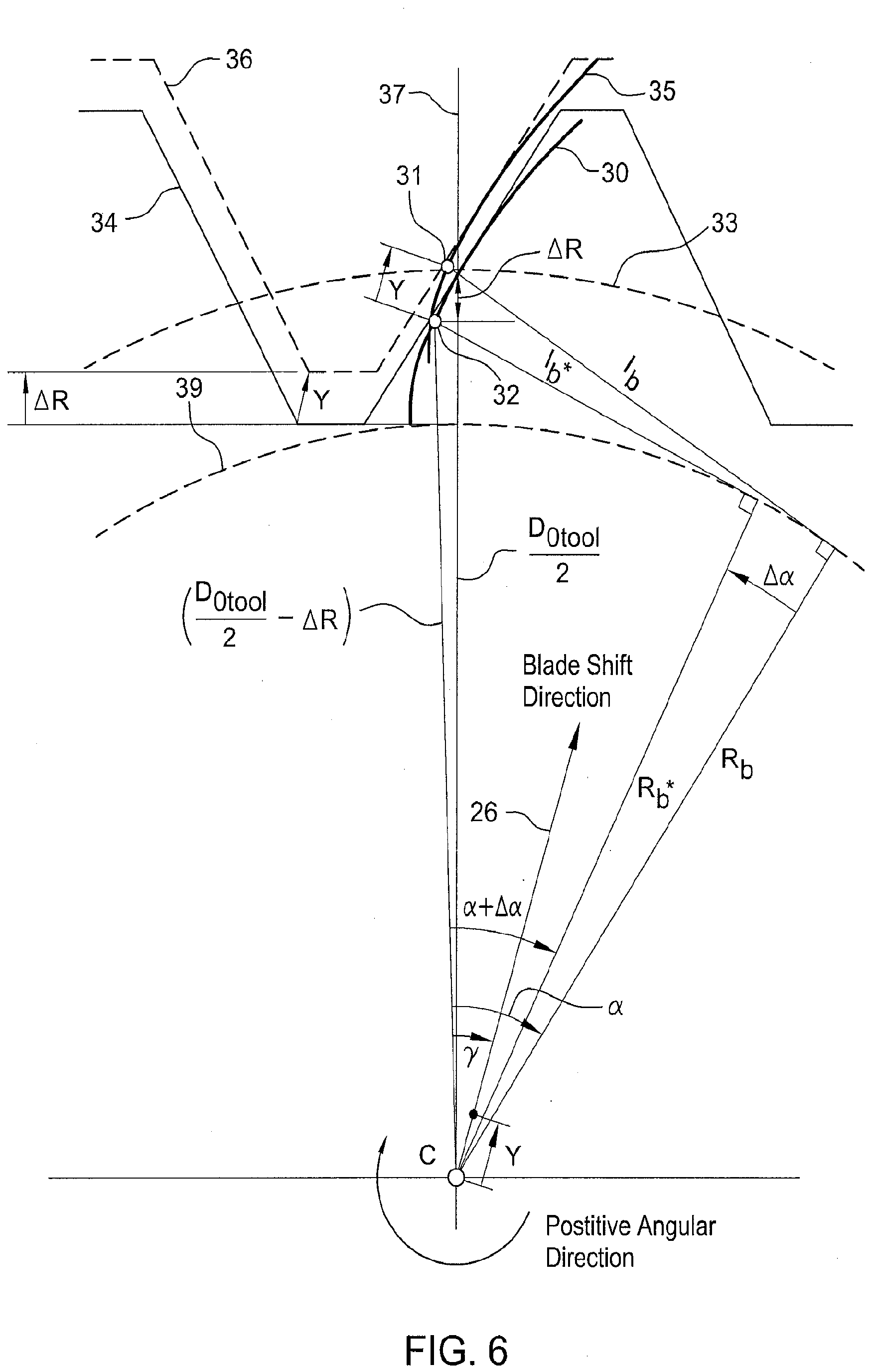 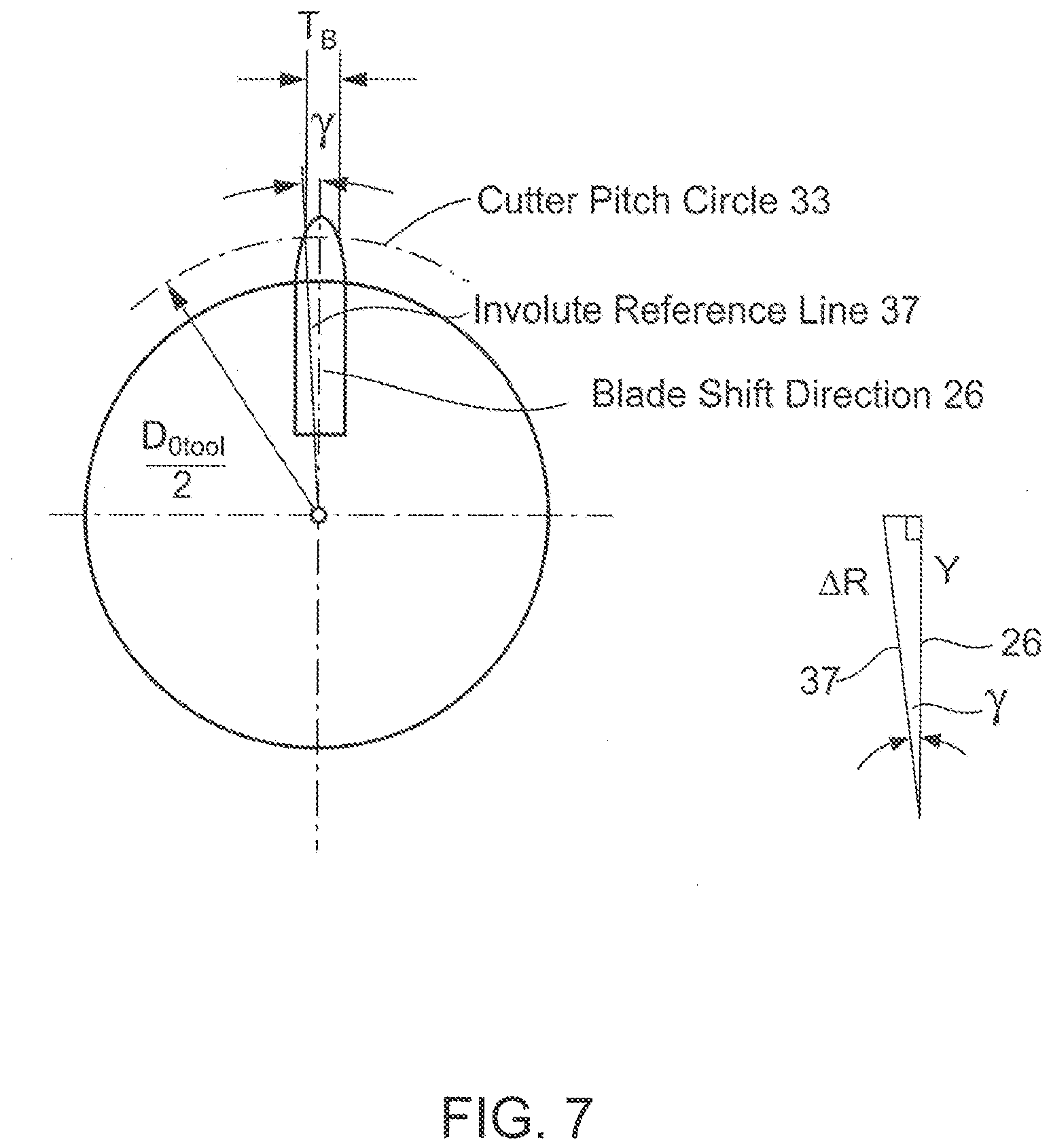