[0001] The invention is within the field of measurement and evaluation of human physiological manifestations and relates to the construction of a device for measuring and diagnosing the galvanic skin response of a user while he/she operates a computer, and to the method of measuring and performing diagnostics by this device.

[0007] The stated goal is achieved by an invention which is a device for measuring and diagnosing a skin galvanic response of a person working with a computer that is controlled by a surface-modified mouse equipped with a control processor, characterized by four touch sensors on its surface, formed by contact electrodes which are placed on the locations of the correct hand grip of the mouse, .i.e. two locations for the palm, one for the middle finger and one for the thumb, and which are interconnected with each other, creating six measuring channels, wherein the mouse is equipped with a signal processor comprising of a measuring unit divided into sections in the amount that corresponds with the number of measuring channels; the measuring unit is connected in series with a microprocessor unit and channel switch, so that each section of the microprocessor unit is connected with one measuring channel and the channel switch is connected back to the measuring unit so that each of its section is connected with a single line-in and the microprocessor unit has an output for connecting it with a controlling computer.
[0008] In an advantageous variant, each section of the measuring unit comprises of in series connected R/U converter, amplifier, A/D converter, and galvanic separator, which comprises of an optocoupler, and the control and signal processors are connected with the controlling computer via a USB interface.
[0009] Another essence of the invention is a method of measuring and performing a diagnosis of a skin galvanic reaction of a person working with a computer operated by a mouse with its surface equipped with touch sensors, the contact electrodes, in which six channels are formed by the interconnection of the four contact electrodes located at the places of correct hand grip of the mouse, i.e. two locations for the palm, one for the ring finger and one for the thumb; the measuring current between the two selected contact electrodes is cyclically supplied by the signal processor, and the resulting signal in the form of a voltage proportional to the size of the respective GSR is amplified and digitized and after being galvanically separated from interference of other devices delivered to the software for evaluation and processing.
[0010] The new invention achieves a greater effect, as such type of device allows to obtain higher quality GSR results which are not affected by external influences, in particular, the effect of mishandling the mouse, because the six-channel measurement between the four contact points of the skin allows to process data with subsequent algorithmic evaluation, virtually eliminating measurement disturbances.

[0011] Specific examples of implementation of the invention are depicted in the embodiments, wherein:

Fig. 1 shows a general view of the computer mouse equipped with sensors;

Fig. 2 shows the block diagram of the device;

Fig. 3 shows the internal scheme of the GSR signal processor;

Fig. 4 shows the organization of measuring for one channel;

Fig. 5 shows the diagram of the interconnection of the individual channels between the contact electrodes;

Fig. 6 shows the diagram of GSR measuring across the individual channels over time.

[0012] The exemplary embodiments that show the invention and the examples of specific implementations described hereafter should not be construed to be limitative in any manner and serve merely as illustration.

Examples of implementation of the invention

[0013] The device according to the invention comprises of a specially adapted computer mouse 1 which has four touch sensors on its surface made by contact electrodes 21, 22, 23, 24, at the locations of the assumed correct grip of the mouse 1, which are two locations for the palm, one for the ring finger and one for the thumb as can be seen in Fig.1. In addition to the standard control processor 11, the mouse 1 is equipped with another signal processor 3 which is connected with the contact electrodes 21, 22, 23, 24. The control processor 11 and the signal processor 3 are then connected to the host control computer 4, for example, via a serial bus 5 (Universal Serial Bus) interface as shown in Fig. 2. The contact electrodes 21, 22, 23, 24 are interconnected to one another forming six measuring channels K1, K2, K3, K4, K5, K6, as shown in Fig. 5. The signal processor 3 consists of a measuring unit 31 divided into sections corresponding to the number of measuring channels K1, K2, K3, K4, K5, K6. After the measuring unit 31, the microprocessor unit 32 and the channel switch 33 are connected in series, and to each microprocessor unit 32 section, there is one measuring channel K1 to K6 connected. The channel switch 33 is also connected in a feedback loop to the measuring unit 31 so that each of its sections is connected by a separate input, as can be seen from Fig. 3. The microprocessor unit 32 is further provided with an output 321 for connection to the control computer 4. Each section of the measuring unit 31 is in the basic implementation formed by a R/U converter 311, an amplifier 312, an A/D converter 313 and a galvanic separator 314 based on an optocoupler which are all connected in series as seen in Fig. 4.
[0014] In the measurement and evaluation of human physiological manifestations by means of the GSR analysis, the signal processor 3 carries out six mutually independent single-channel measurements using the channel switch 33 to bring a measuring current exactly during a predetermined time point, for example 0.15 to 0.20 s between the two selected contact electrodes 21 to 24 creating the measuring channels K1 to K6. This measuring current activates the R/U converter 311 of the respective section of the measuring unit 31, the R/U converter creates a voltage proportional to the size of the GSR signal. The voltage at the R/U converter 311 output is amplified by the amplifier 312 and then converted by the A/D converter 313 to a digital signal. Through the optocoupler-based galvanic separator 314, the digital signal from the measuring unit 31 is brought for evaluation and input processing into the microprocessor unit 32 from which the signal may be further transmitted to the control computer 4. This process is periodically repeated by switching the channel switch 33 between all six measuring channels K1 to K6, as shown in Fig. 6. This process provides a practically continuous flow of relevant data for subsequent GSR evaluation.

[0015] The claimed invention is applicable for analyzing the emotional and psychophysiological characteristics of a person during common computer work and allows to remotely assess and indicate any possible medical or psychological complications. The invention can also be used to improve the feedback of electronic teaching programs, computer games and other interactive applications. 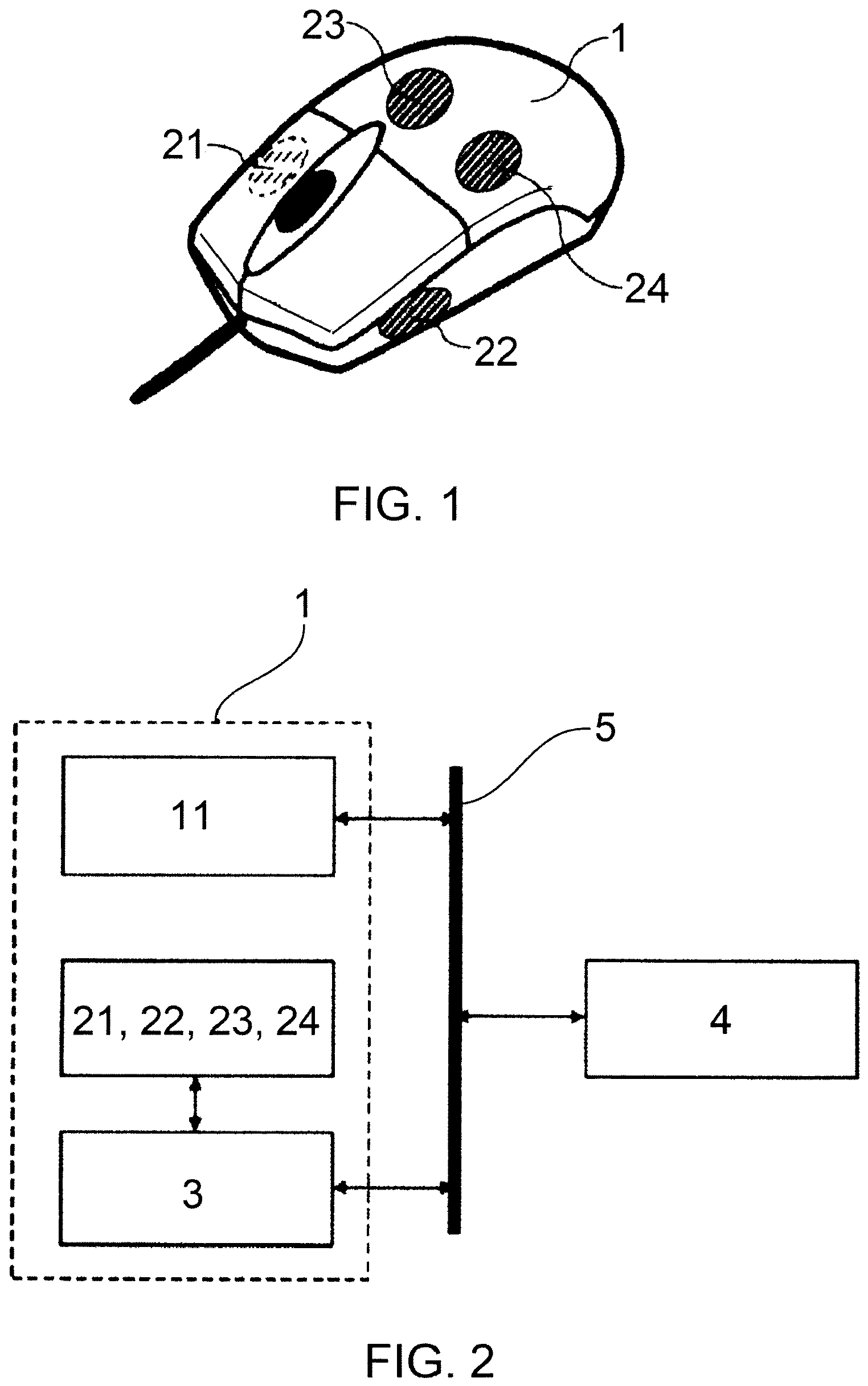 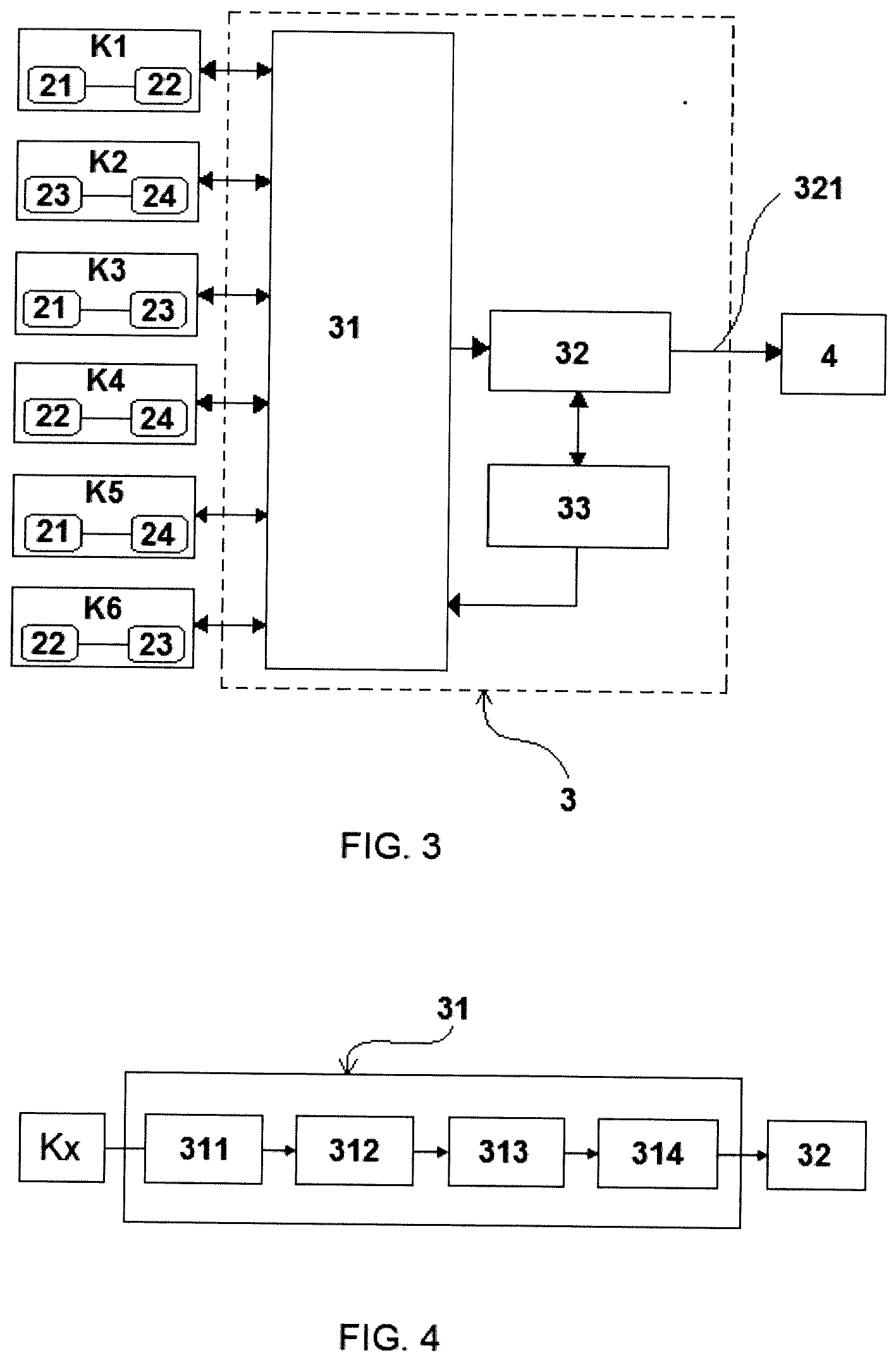 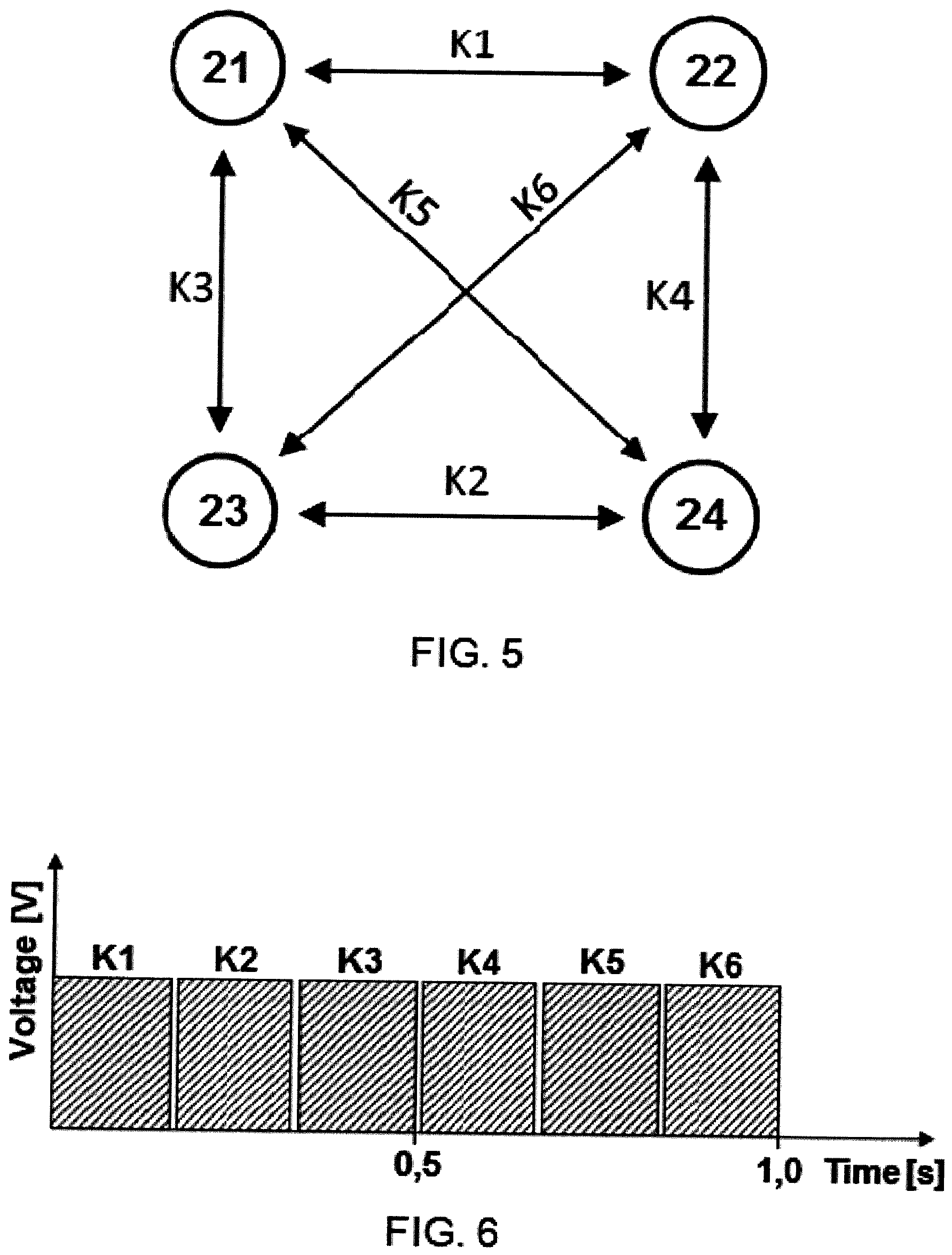 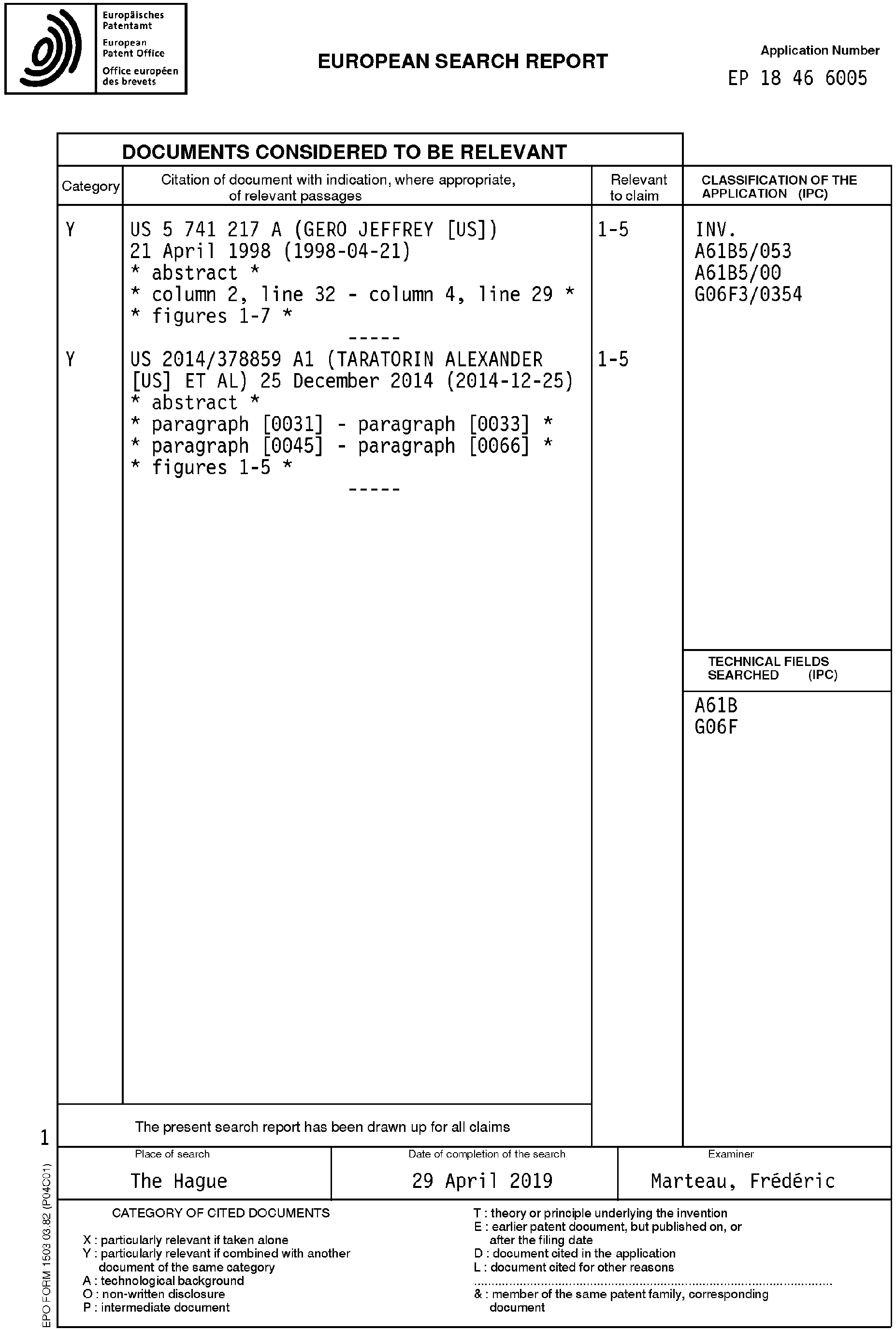 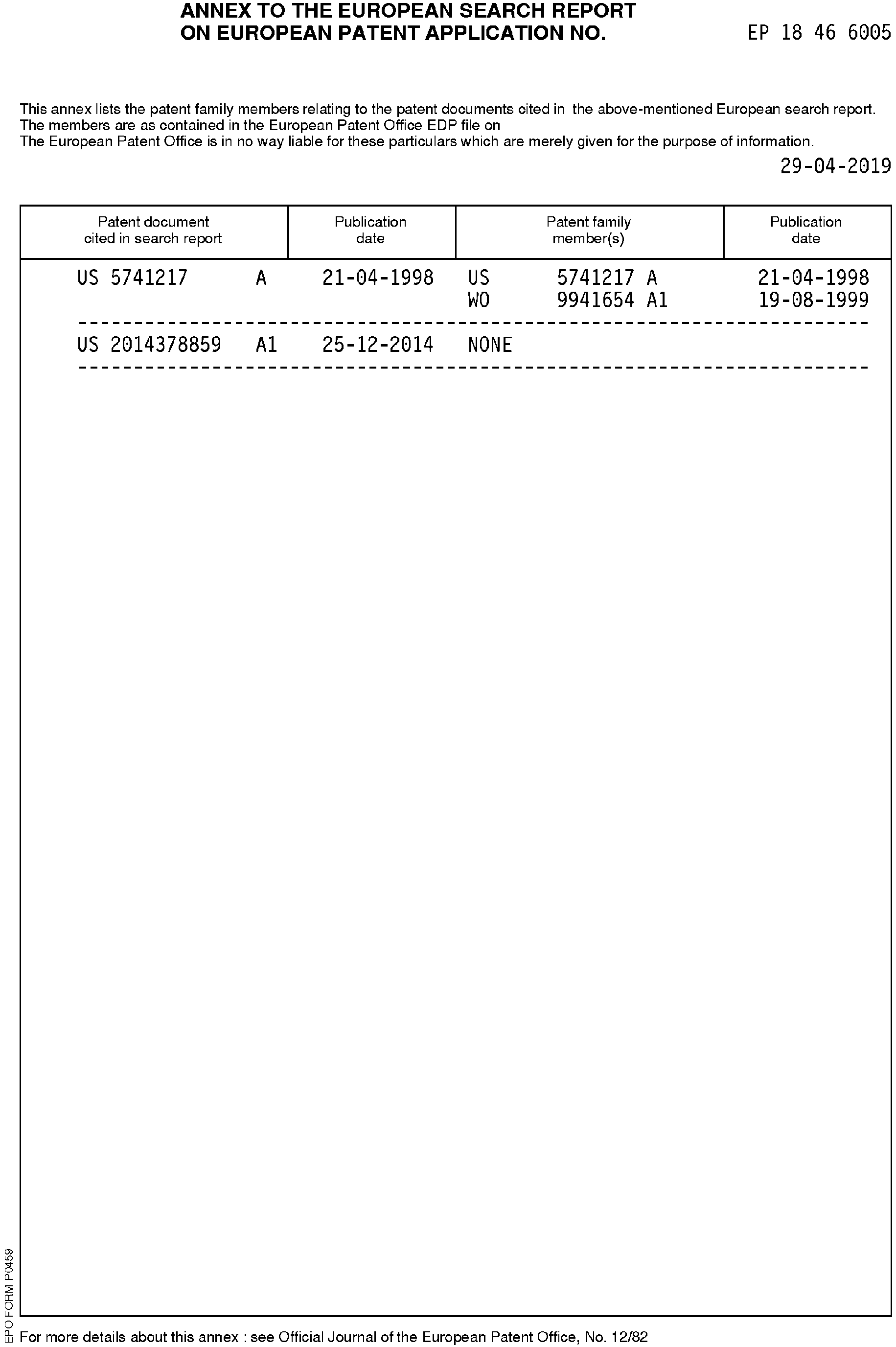